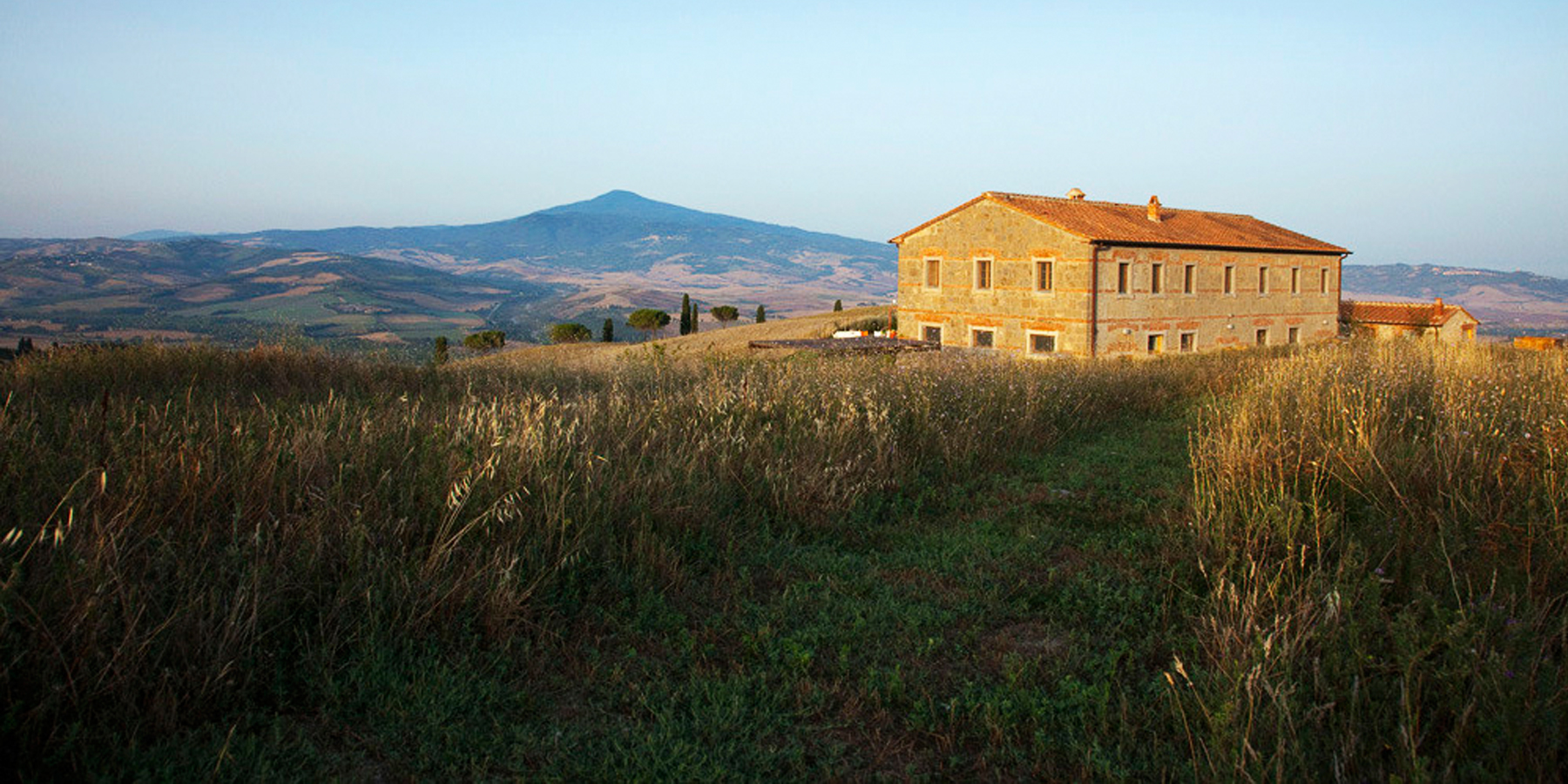 A magazine editor and her music-industry executive husband leave Brooklyn for the Italian countryside, where despite numerous trials, they succeed in turning a pair of historic buildings into two chic boutique hotels — while recreating their lives in the process. 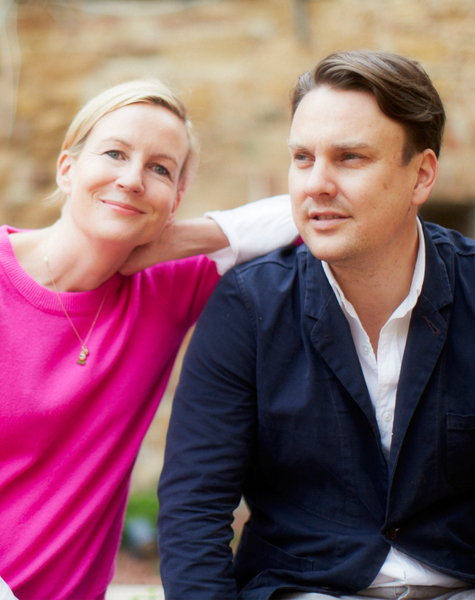 November 3, 2014The author, Ondine Cohane, and her husband, former music executive John Voigtmann, married a decade ago in the area near their hotels (photo by David Loftus). Top: La Bandita Countryhouse sits in a nature reserve in Southern Tuscany (photo by Tuca Reines).

Driving up a steep and deeply rutted dirt road lined with statuesque cypress trees, we arrived at a high ridge with bird’s-eye views over the UNESCO-protected Val d’Orcia, in southern Tuscany. Further along the track, a deserted stone farmhouse, originally built in the 1920s, had become an impromptu barn, with bleating sheep holding court on the ground floor, pigeons building nests and romancing in the rafters and a pigsty whose views took in some 360 degrees of rolling green fields dotted with cloud-white flocks of sheep, hilltop medieval towns and, in the distance, the dormant volcano of Monte Amiata. The house had no plumbing, no electricity; the four-acre property not a single tree. No human being had resided here since the 1950s.

Today, this farmhouse is La Bandita Countryhouse, an eight-bedroom inn that my husband, John, and I opened in 2007, five years after this initial viewing. Last year, we added the 12-room La Bandita Townhouse to our improbable hospitality mini-empire. It’s located 20 minutes away from the farmhouse in a converted 14th-century former convent in the tiny hilltop town of Pienza, famous for its Renaissance architecture and as the setting for such artfully shot films as The English Patient and Gladiator. 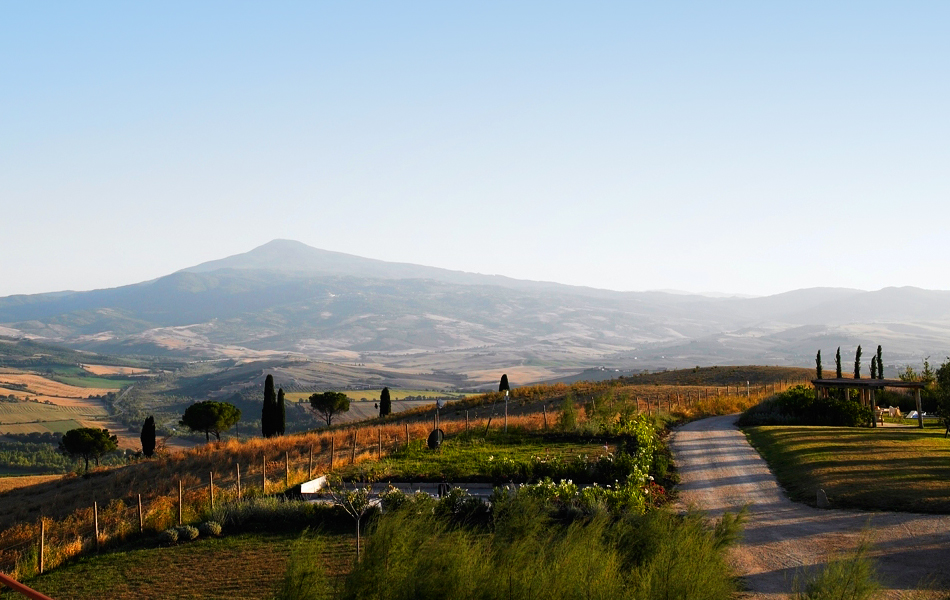 Cohane and her husband converted a 1920s farmhouse set within a nature reserve in southern Tuscany into an eight-bedroom boutique hotel called La Bandita Countryhouse, which opened in 2007. Photo by Tuca Reines 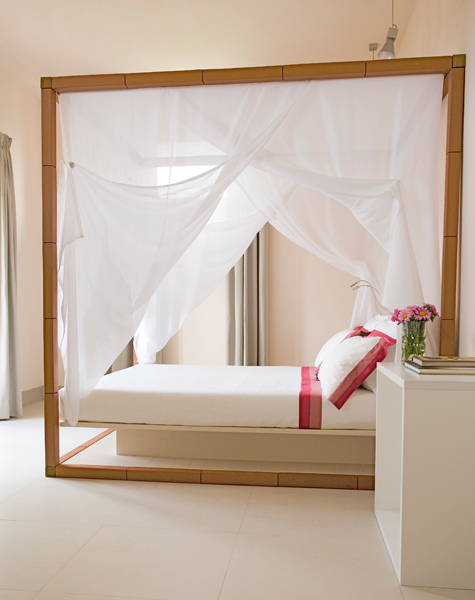 In a bedroom at the Countryhouse, a cubic terracotta structure frames the bed, white travertine stones line the floors, and linens from the centuries-old Tuscan-based brand Busatti create pops of color. Photo by Rick Lew

When I tell our guests that we barely even knew how to change a light bulb before we left the United States and moved to Italy, I can see that they don’t believe me. So I certainly don’t mention that neither my husband nor I had any hotel-management experience, or a design degree, or any sense of how to landscape a garden or feed 60 to 80 people on any given day. And yet here we are, eight years later, with two homey boutique hotels and a small restaurant in our adopted homeland.

I had lived in Florence and the surrounding Chianti countryside when I was a child. My British and Irish-American parents had a sailboat in Italy even before I was born, and we spent summers on the Mediterranean every year. A love of Italy ran deep in my blood. When my father died unexpectedly just before I turned 11, my mother and I moved to New York City from Florence, and, from then on, Italy became even more of my golden place, full of happy memories — and more than a few ghosts.

My return to Tuscany now seems completely fated. But it was a journey of much naivety, and unexpected drama, a trip that required us to give up our lives and our jobs in New York, mine as an editor at Condé Nast Traveler (where I remain a contributing editor), John’s as the head of international marketing for Sony BMG. 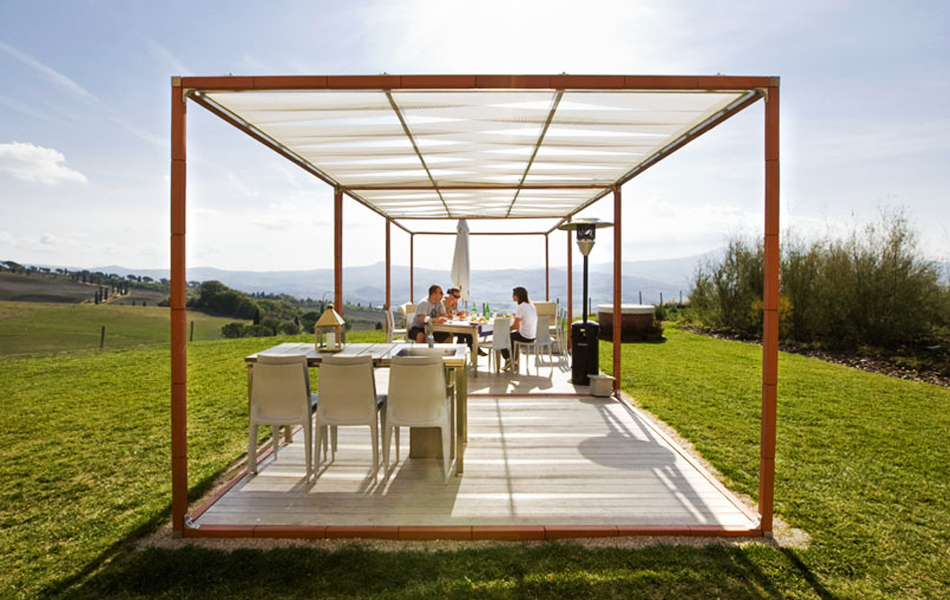 A custom-made pergola frames the view of the dormant volcano Monte Amiata. Photo by Jade Loop 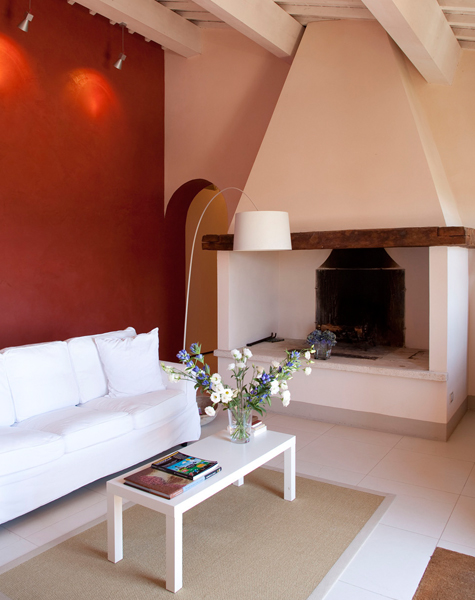 Among the most memorable of the many roadblocks we encountered along the way were the farmhouse’s supposed owners, a duo of Sardinian brothers who didn’t actually have the right to sell us the house when they first committed to do so; a broker who enjoyed nightclubs more than real estate; nuns who proved to be the most savvy businesswomen we have ever met; a swimming pool permit that took two and a half years to secure; chain-smoking contractors (with hearts of gold) who wouldn’t work in the rain; a slosh-bucket throwing Neapolitan neighbor who was upset that our scaffolding blocked his view of the local cathedral’s spire; and a wild boar we nicknamed Big Boy because he was the size of a Fiat 500 and was intent on destroying any garden we tried to start.

And yet, whenever it seemed we were going to be defeated by logistics or bureaucracy, someone always came along to offer help. Our architects Ernesto Bartolini and Arianna Pieri — the partners of DA Studio, in Florence, who also oversee Pritzker Prize–winner Richard Rogers’s Italian operation — have become our guardian angels and great friends. In addition to helping us understand the engineering involved in renovating a 1920s farmhouse and 14th-century nunnery, they also assisted us as we developed the design direction that would characterize both properties: a vision that showcases local artisanal craft and native Tuscan materials in unexpected ways, creating spaces that are more modern, light and airy than they are traditional. 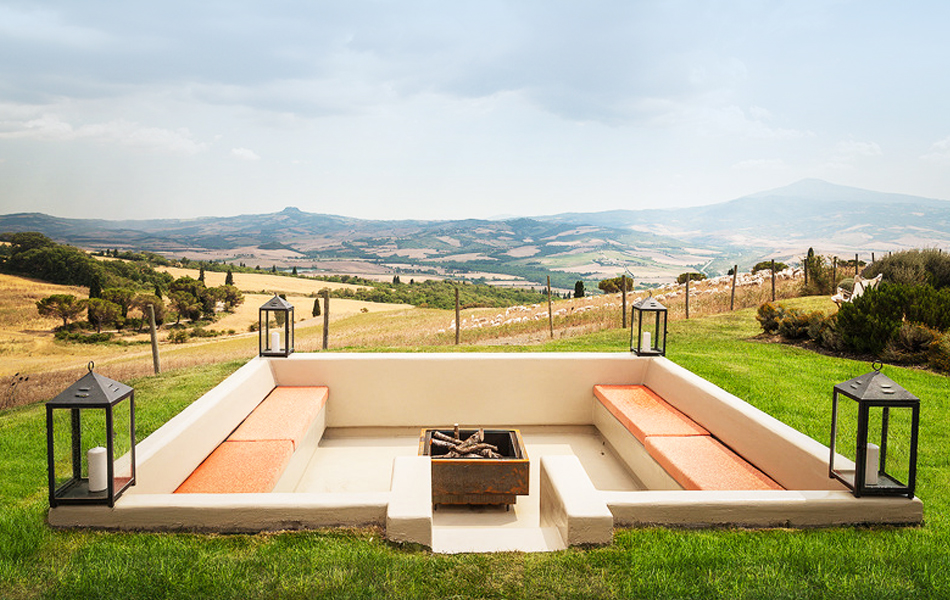 The Countryhouse’s sunken fire pit serves as a unique setting for sunset aperitivi and post-dinner stargazing. The lanterns are by the Roman designer Ilaria Miani. Photo by Jarek Pawlak 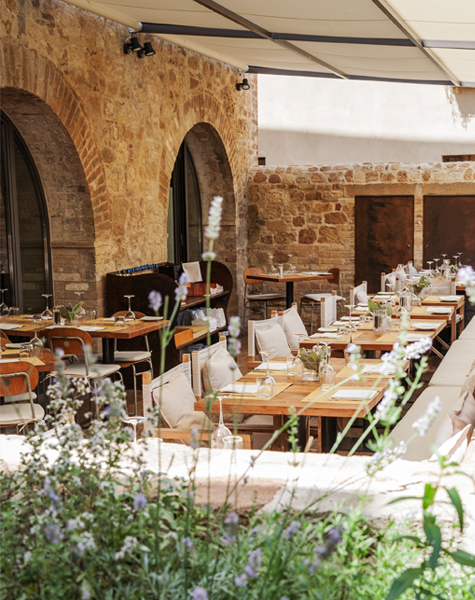 An herb garden borders the sunken terrace area that comprises the Townhouse’s outdoor dining space. Beyond it, the hotel’s walled garden offers a tranquil and rare green refuge within Pienza’s historic heart. Photo by Virginie Garnier

At the Countryhouse, we selected terra-cotta — a material usually used for the tiles that cover the floors of most Tuscan farmhouses — to wrap the canopy-like frames of our custom-made beds, and we used pulverized travertine, one of the country’s incredible natural stones, to give our floors a smoother feel underfoot and to look more contemporary than one might otherwise expect. Outside, a pergola sits on a frame of recycled-wood planks, as though it’s a floating modern-art installation, and, back inside, walls colored with an antique Italian method of fresco-painting became the only pops of pigment, like the deep blue finish of the shower walls, a color that reminds me of the Mediterranean Sea.

A couple of years after we opened the Countryhouse and things were running somewhat smoothly, we decided to seek out a project that could organically add to the scale of our existing business. We lived in Pienza’s historic center and loved the sweet rhythms of its daily life. But there were no available buildings within its ancient walls that could be suitably converted into a small inn. Or so we thought. “I heard the nuns are looking to sell their building,” Paolo — or Poppy, as he’s known locally — told us one night as we sipped a nightcap at his bar overlooking the valley. 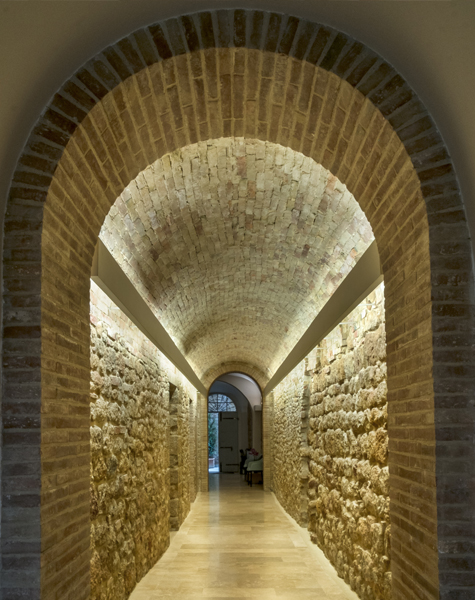 Excavations behind the plaster of the entry hallway at the Townhouse revealed stones dating to the 15th century. Track lighting in the vaulted ceiling creates a museum-like effect. Photo courtesy of Demanding Art

Poppy’s tip became the start of our second adventure. Soon after he told us about it, we knocked on the building’s heavy door and followed the convent’s two remaining nuns, who were then 92 and 85, through a maze of corridors and floors that included cell-like bedrooms, an attic laundry room outfitted with an antiquated exercise bike and featuring rich views of the town’s cathedral, a classroom with wooden desks where kids studied the catechism and a walled garden that was completely overgrown with weeds except for a few beautiful orange roses.

As the nuns toured us around the structure, they complained about having to clean this 500-year-old labyrinth of rooms by themselves and of the taxes they had to pay. It quickly became clear that, after living in Pienza since World War II, they were ready to return to the towns of their births. And by the time we left them that day, they had admitted that their order needed an influx of cash.

The second time we visited them, the nuns had their suitcases packed and waiting in the hallway, this despite the fact that we weren’t even sure we could meet their asking price, let alone afford the needed renovations. But by the time John had gone to the Vatican to meet the order’s higher-ups — sisters who told him that any reduction in the price of the convent would take food out of the mouths of starving children in Africa — we knew we couldn’t say no. 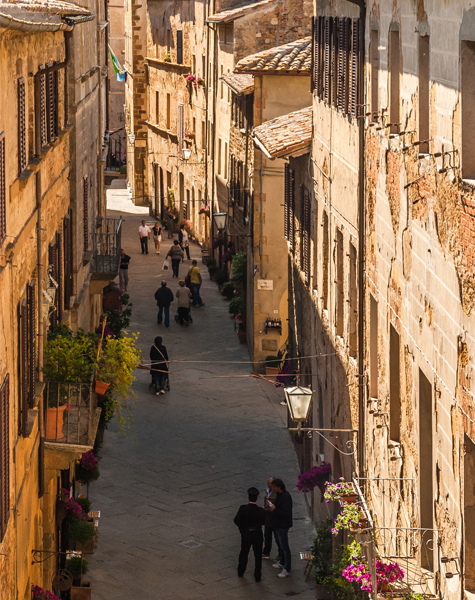 La Bandita Townhouse looks onto Pienza’s Corso Rossellino, the pedestrian main street that runs through the Renaissance hill town, which is a UNESCO heritage site. Photo by Jarek Pawlak

So we bought the building and once again turned to Ernesto and Arianna for the renovation. Together, we devised a scheme that would strip the building back to its original bones and then reconstruct it, all with an eye toward creating clean lines and letting in loads of natural light. We removed centuries’ worth of plaster to reveal the original stone walls, which date to the era of 14th-century Pope Pius II, who was born in Pienza and, with the help of famed Renaissance architect Bernardo Rossellino, gave the town its perfect plan. (Pius II was responsible for building the oldest part of the convent.)

As the renovation progressed, we reclaimed beautiful wood-beamed ceilings hidden under epochs of drywall; we reinforced the foundations of the newer part of the building, a four-floor structure built in the 19th and 20th centuries, which sat on top of an antique well; and we designed an open-kitchen restaurant in the former classroom, where 1950s-era school chairs sourced in Florence would remind us of the space’s original function.

Finding the right furniture and decorative accents for the Townhouse became our obsession. Whereas we felt the Countryhouse was perfectly suited for contemporary items, here we wanted a few pieces in each bedroom and in all the public areas that would bridge the gap between ancient and modern, to connect the building’s new use to Tuscany’s rich decorative-arts traditions. 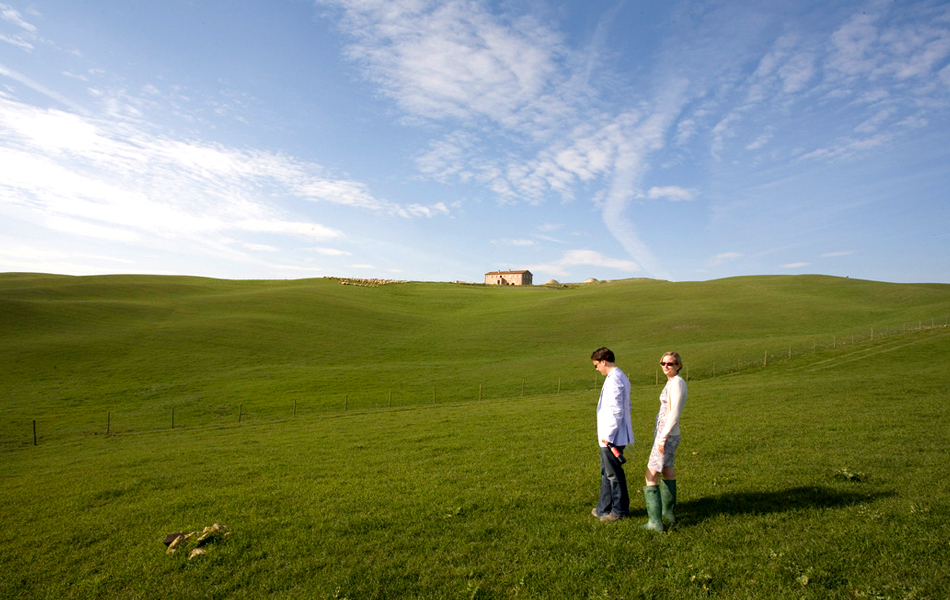 The couple stands in one of the sheep pastures below the Countryhouse, before the property was landscaped. Now, the four-acre grounds include olive and oak trees, an infinity pool and flower and vegetable gardens. Photo by Jimmy Cohrssen

And so we made pilgrimage after pilgrimage to Florence and the surrounding countryside to find such vintage pieces as metal-backed orange stools from the 1950s that were once used by Italian factory workers and now sit overlooking the restaurant’s kitchen; Florentine Art Deco white chaises from the 1920s that provided a soft seat within a clean-lined niche off the guest library; and a huge map of Italy from the 1860s, which we found in the back of a storeroom at one of Pienza’s antiques dealers.

Finally, on Good Friday of last year — three years after starting the project — as the town’s citizens took their yearly pre-Easter procession around the old town, we opened La Bandita Townhouse and its ground-floor modern-Tuscan restaurant and cafe.

It was never smooth sailing, but, today, nearly a decade after moving to the Val d’Orcia, I can safely say we have learned how to navigate Italian bureaucracy, how to visualize a completed space simply by looking at architectural plans, how to create rooms that artfully mix contemporary and traditional furnishings in a way that makes guests feel like they’ve landed at home. Because we know we’ve landed at home. And we can now change a light bulb with the best of them.