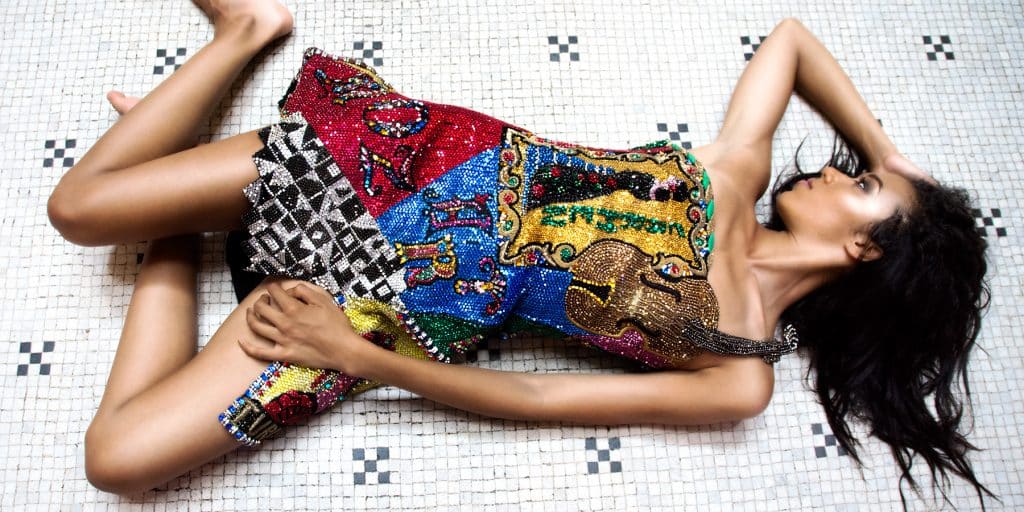 More than two decades after his death, Gianni Versace's work and life are once again in the spotlight, thanks to a tribute fashion collection, a museum retrospective and a TV series examining the events that led to his murder. 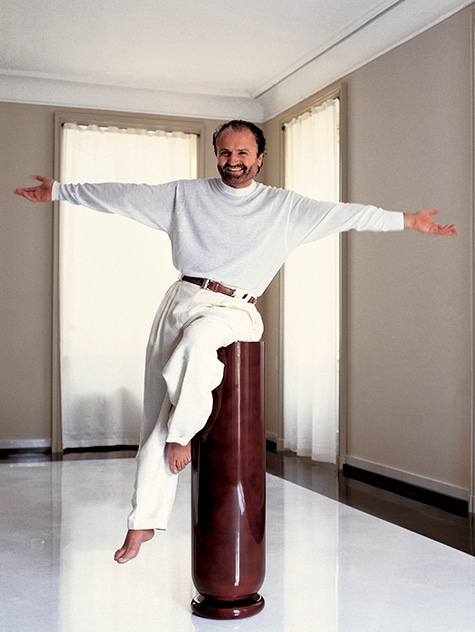 March 5th, 2018Gianni Versace’s sister Donatella, who took over his fashion brand after the death of the designer, photographed here for the June 1990 issue of Vogue UK, celebrated his designs in a recent runway show (portrait by Snowdon / Trunk Archive). Top: A model wears a dress from Versace’s Fall 1991 ready-to-wear collection. Photo © Hermine Björkman

A quartet of models clad head to toe in vibrantly patterned silks — a 24-karat-gold-on-black swirl of imagined medallions, floral flourishes and stylized botanicals, paired with exaggerated animal prints — opened Versace’s Spring 2018 ready-to-wear show, held in September at the Triennale museum in Milan. The return to the runway of Gianni Versace’s beloved Barocco prints heralded not only an entire collection created in honor of the late designer but also his sudden return to the zeitgeist. Forty years after he founded his exuberant fashion house and just more than two decades since his grisly murder, Versace’s greatest sartorial hits are back in stores and on display in major exhibitions, while the circumstances surrounding his tragic end play out in weekly installments on the FX limited series The Assassination of Gianni Versace: American Crime Story.

“Now is the time to teach the millennials what fashion was like in the nineties. That was the last time that fashion made a difference,” Donatella Versace has said of her decision to reach into her brother’s archives to create spring’s Versace Tribute Collection. It marks a rare moment of reflection for a house that has until now avoided confronting or quoting its past. “It was too painful to think about before,” Donatella said in a recent interview. “Twenty years went by, and I was ready.”

The same can be said of the originals, a high-spirited selection of which are on display in Berlin at a Gianni Versace retrospective organized by independent curators Karl von der Ahé and Saskia Lubnow. On view through April 13 at the Kronprinzenpalais (not too far from the Kunstgewerbemuseum, where the blockbuster “Versace: Signatures” survey was mounted in 1994), the exhibition brings together approximately 150 ensembles sourced from private collections around the world. 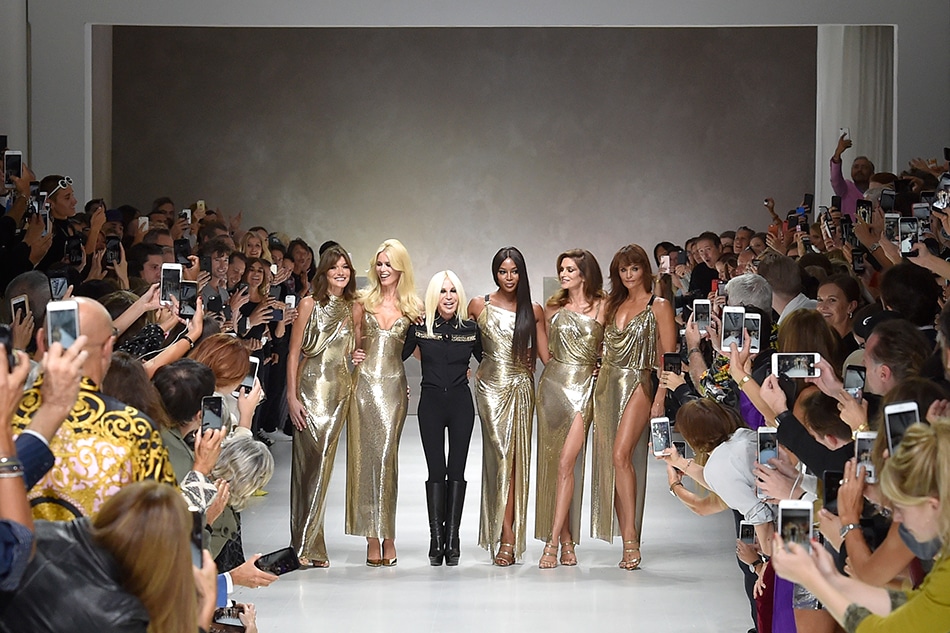 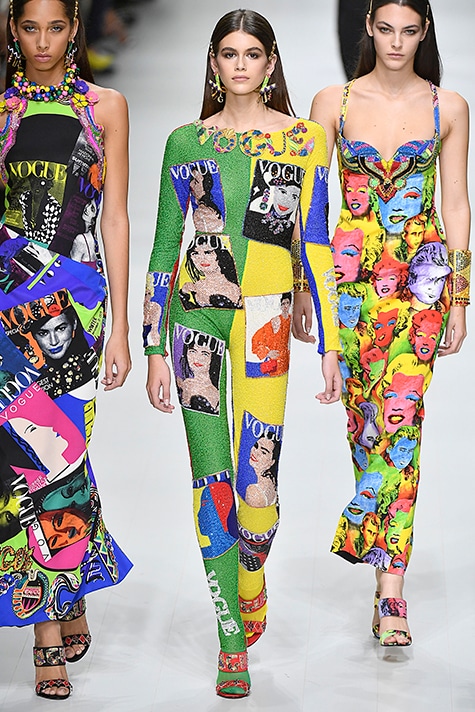 Many of the most striking pieces in the retrospective were loaned by Greek fashion entrepreneur Eri Kakkava, founder of 1stdibs dealer Jade Vintage. Kakkava first met Versace in 1978, when he was still designing for the Italian label Genny and preparing to introduce his own line. Having opened brand boutiques for the likes of Lanvin and Courrèges in the tony Kolonaki neighborhood of Athens, she soon added a Versace shop.

Kakkava’s friendship with the designer gave her “something of an all-access pass” to the burgeoning world of Versace, including the opportunity to go behind the scenes during the production process, says Michele Rokkos, director of Jade Vintage. Among the one-of-a-kind pieces Kakkava acquired over the years are a hand-painted canvas skirt — a prototype created for the Spring 1993 collection — and a shimmering crystal-beaded bustier inspired by Puccini’s Turandot. In Berlin, they are joined by her pieces from Versace’s Punk, Bondage, Teatro and Miami Collections.

Inviting visitors to take a closer look at a wide variety of Versace designs, the retrospective is a reminder of his innovative approach to materials. “He was indeed a master of bold, colorful prints, but his scope was much wider,” says Darren Blackham, cofounder of Zeus Vintage, in Doncaster, England. “He pioneered fashion through his experimentation with fabric, intricately quilting leather, adding metal hardware, heavy beading and safety pins to evening dresses and creating Oroton, a supple chain mail with incredible drape.”

The signature extravagance of Versace — forever aligned with glamour, sex, celebrity and spectacle — can overshadow the designer’s broad and deep engagement with history and culture. “As a native of Calabria, he saw the beauty all around him: a Roman bath, a Greek remain. He could not help but to be influenced by the classical past,” says Claudia Ricco, founder and CEO of London-based 1stdibs dealer Rewind, who points out the “Botticelli overtones” in the seashells, coral and starfish that adorned his Spring 1992 Trésor de la Mer Collection. A passionate art collector who surrounded himself with works by Wassily Kandinsky, Pablo Picasso and Warhol, Versace collaborated with such talents as Robert Wilson and Twyla Tharp on costume designs for opera, ballet and theater.

“Versace is the only contemporary designer who embraces both the Madonna and Madonna,” wrote Richard Martin, who curated the 1997 Metropolitan Museum Costume Institute exhibition of Versace’s work. That dynamic range helped to earn him a place in the Met’s permanent collection — which includes 60 of his designs, including the “safety pin dress” famously worn by actress Elizabeth Hurley — as well as in the upcoming Costume Institute extravaganza “Heavenly Bodies: Fashion and the Catholic Imagination.” Opening May 10, the thematic exhibition will place fashion in dialogue with masterworks of religious art (Versace is a sponsor of the show, and Donatella will cohost the glittering Met Gala, along with Amal Clooney, Rihanna and Anna Wintour). 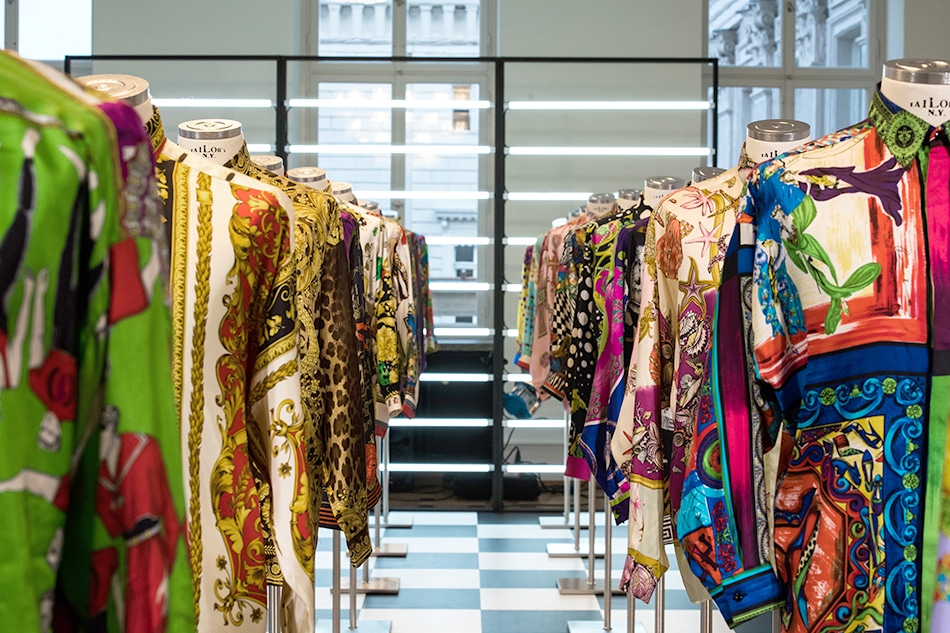 A collection of Versace’s baroque-print shirts is on display at the Berlin retrospective. Image courtesy of the Gianni Versace Retrospective 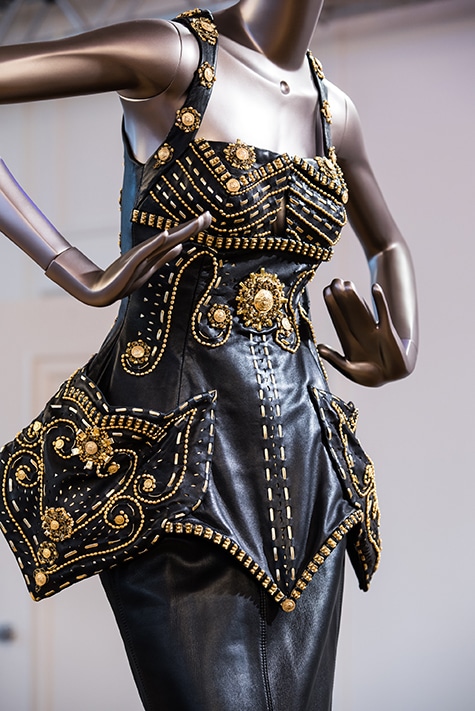 Earlier this month, the Met debuted “Dangerous Beauty: Medusa in Classical Art,” which traces representations of the snake-haired mythological figure from antiquity to the present day. Curator Kiki Karoglou selected three Versace garments that incorporate the house’s Medusa head logo — a motif borrowed from the door knocker of the designer’s Milanese palazzo on Via Gesù — to represent contemporary use of the beautiful gorgon. Because of the fragility of the textiles, they are being shown one at a time over the course of the exhibition, which is on view through January 6, 2019.

For Martin, Versace’s “ubiquitous Medusa is not a label in the fashion sense, but an insignia in the Renaissance tradition.” But surely that is in the eye of the beholder. “The gold Medusa hardware is what makes Versace such a recognizable brand,” says Gabriella Trivigno, cofounder of 1stdibs dealer Gigi Bottega, in Nottingham, England, “even if you’re not a fashion enthusiast.”

Meanwhile, at a time when Donatella has been artistic director of the house longer than her brother, a new generation of fashion enthusiasts and non-fashion enthusiasts alike is getting to know the late designer through the FX program, which premiered in January. Based on Maureen Orth’s 1999 book, Vulgar Favors, the nine-episode series stars Édgar Ramírez as Gianni Versace, Penélope Cruz as Donatella and Darren Criss as serial killer Andrew Cunanan, who shot Versace on the steps of his South Beach home on July 15, 1997.

Producer Ryan Murphy secured permission to film in and around the Mediterranean revival mansion, built in 1930 by Standard Oil heir Alden Freeman and now a hotel and event venue, allowing viewers to savor details like the Biedermeier closets Versace had installed in his bedroom and Barocco prints transposed from silk blouses to mosaic tile floors. Wardrobe was a more complicated matter. Without the cooperation of the Versace family, which has described Orth’s account of the events as “distorted and bogus,” costume designer Lou Eyrich sourced pieces from vintage dealers and re-created a few key looks from scratch.

Versace himself, who exalted contemporary culture and was among the first designers to present fashion as a form of entertainment, may well have appreciated the dramatic portrayal. “If I have to be remembered,” he once said, “I want to be remembered as a man who tried to break a barrier in fashion, to put fashion on the street.”

Shop the Look on 1stdibs 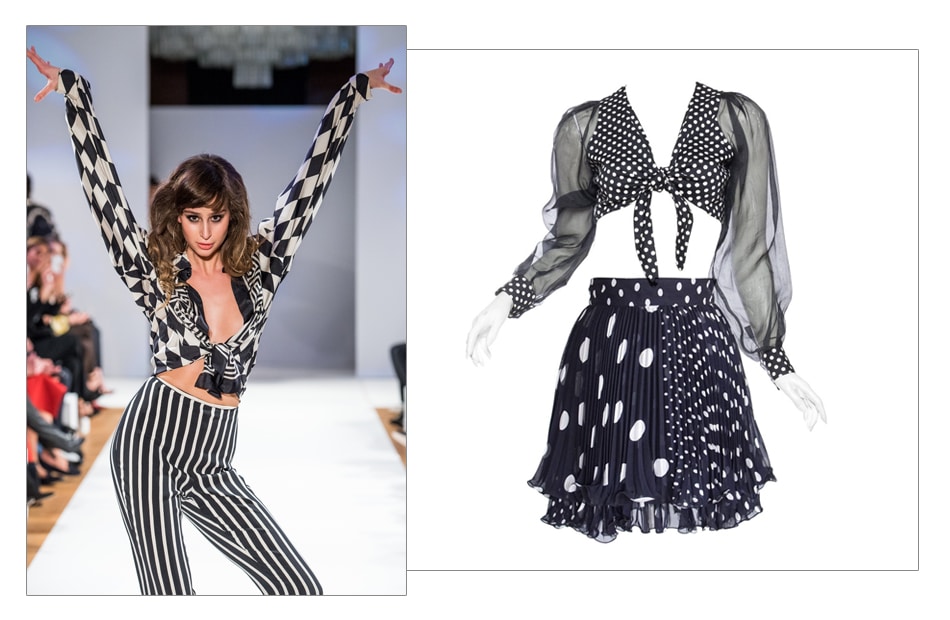 The opening night of the Gianni Versace retrospective in Berlin started with a runway show of some of his most famous pieces. Here and following, we pair looks from the show (left) with Versace items on 1stdibs (right). Sheer crop top, 1990s; Versace polka-dot pleated skirt, 1990s. Images in this slideshow courtesy of the Gianni Versace Retrospective 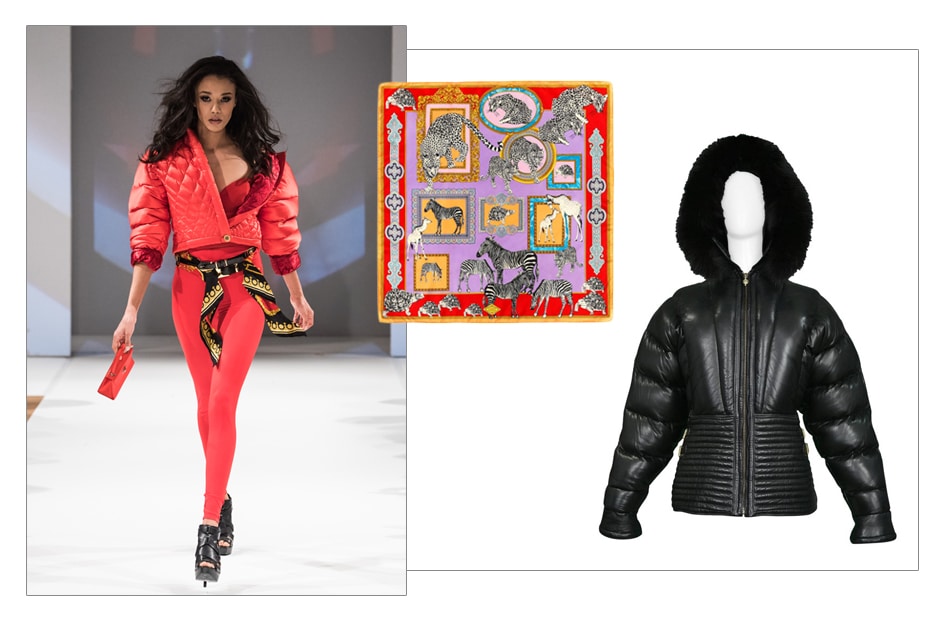 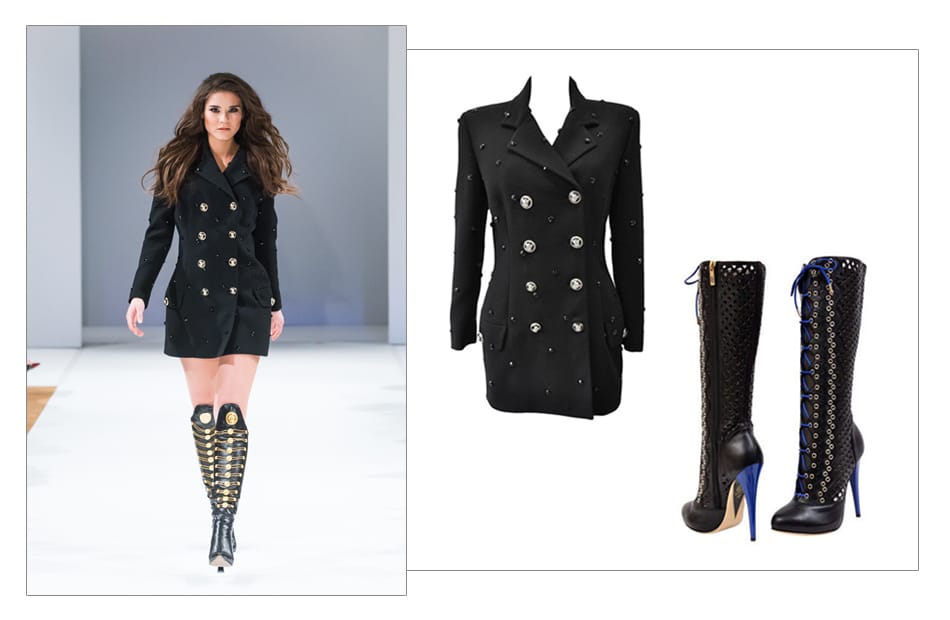 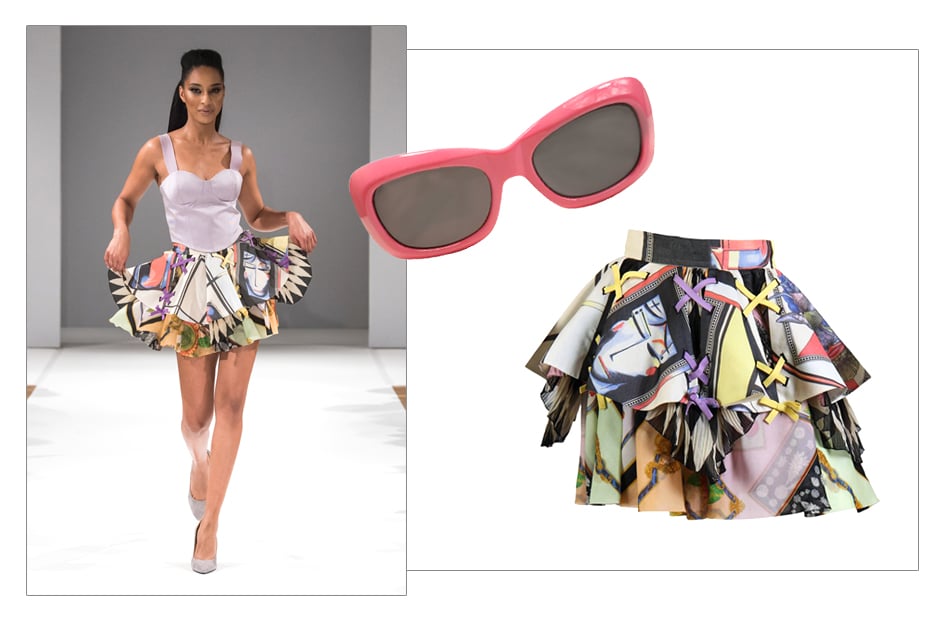 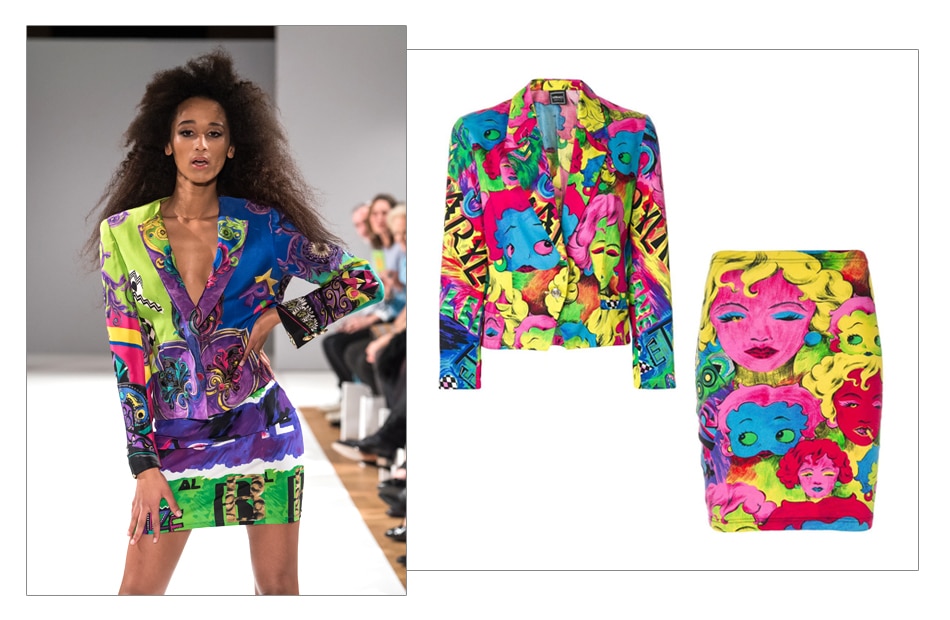 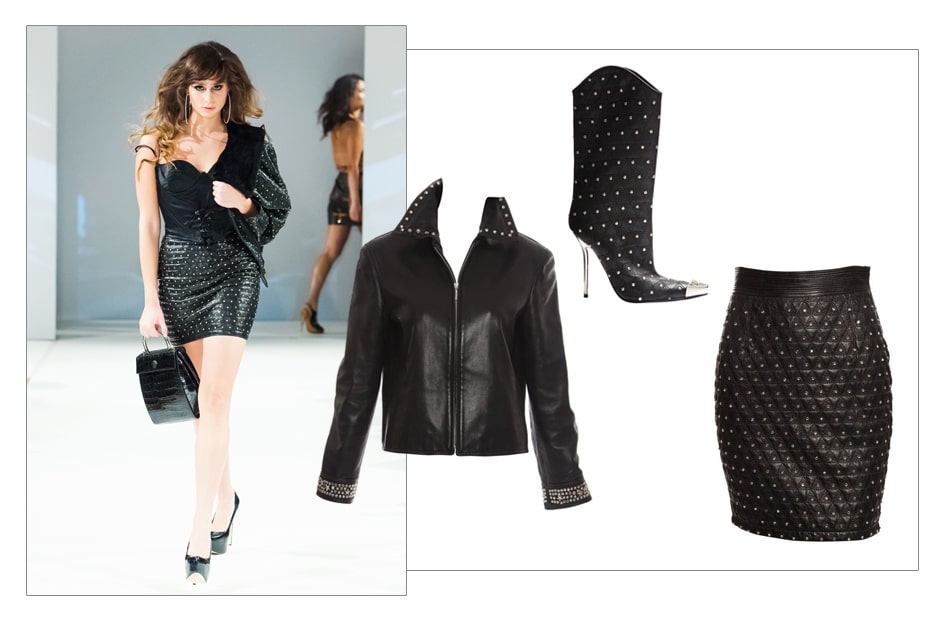