These Jewelry Designers Find Inspiration in Gems from the Past 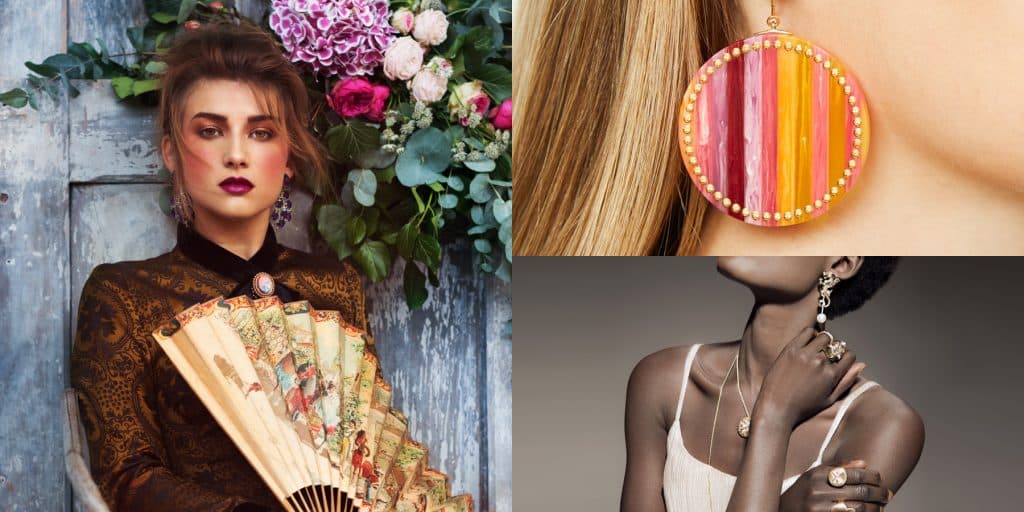 July 22, 2018One of the great beauties of jewelry, beyond its sparkling surface, is its extraordinary durability. Unlike many other design objects, jewels dating back to antiquity are still easily found — and worn — today. Although it might be difficult to procure an ancient Roman vase, searching for a ring from the same era will yield an array of choices. Because so many fine examples are still readily available and not just tucked away in museum vitrines, jewelry’s past continues to inform its present — and its future.

Many of the motifs and fabrication techniques used in antique and vintage jewels, from Byzantine signets to mid-century cuffs, stand the test of time. Just as designers in the 1920s were inspired by the discovery of Tutankhamun’s tomb to create jewelry that married the ornamentation of ancient Egypt with the sleek, graphic lines of Art Deco, so their contemporary counterparts are constantly riffing on the past in their own thoroughly modern ways. Here, five of them highlight the antique pieces found on 1stdibs that influence their work today. 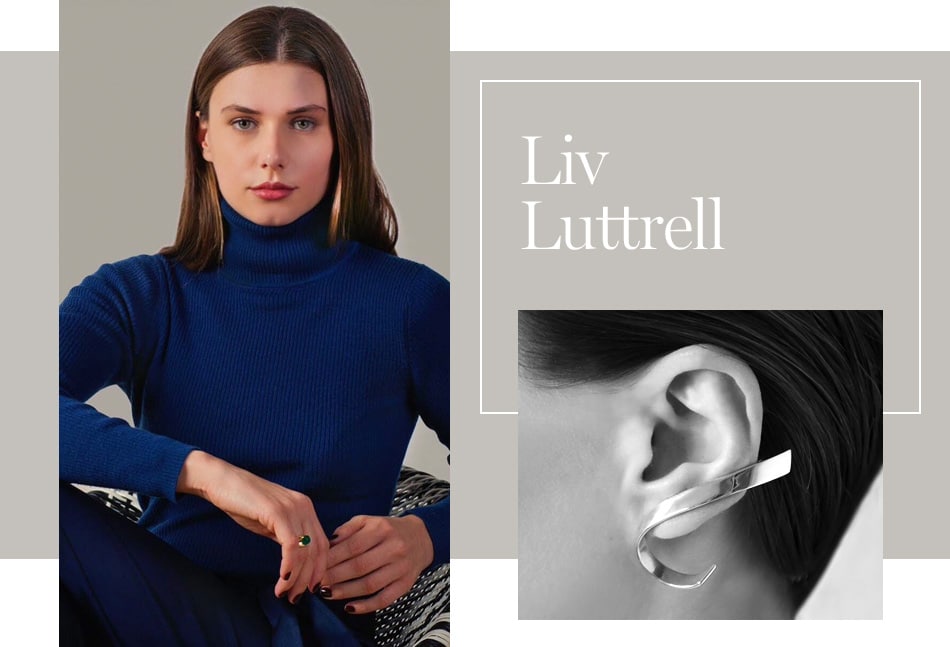 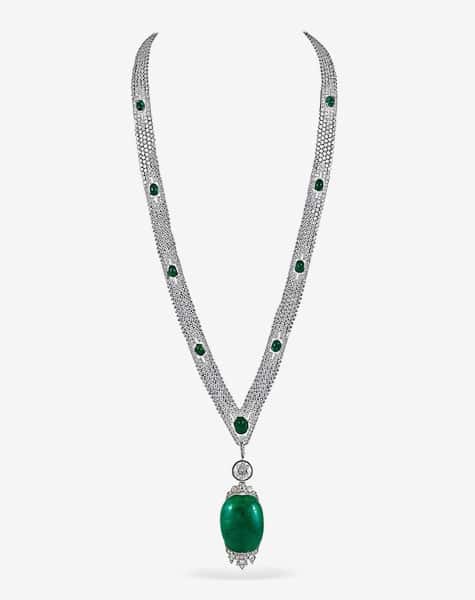 Classically trained as a bench goldsmith, Liv Luttrell has a deep appreciation for the subtle technical details that are often overlooked. The British designer knows firsthand how challenging it can be to create jewelry that looks effortless, like this Art Deco sautoir necklace:

“The meticulously set and matched diamonds are a perfect foil to the extraordinary one-hundred-eighty-nine-carat emerald drop, making an extravagant piece easy to wear. The articulation will make it come alive when worn — that feeling of movement is something I aspire to in my own jewelry.”

Many of Luttrell’s designs capture the molten fluidity of gold. One pair of earrings, for example, gives the illusion of a golden ribbon wrapping around one’s earlobe. Another suspends golden South Sea pearls in such a way that they playfully slide and roll as the wearer moves. Luttrell forgoes excessive ornamentation in favor of clean, understated lines that complement the body’s natural contours. Distilling designs to their purest form, she imparts a sense of lightness to precious materials. 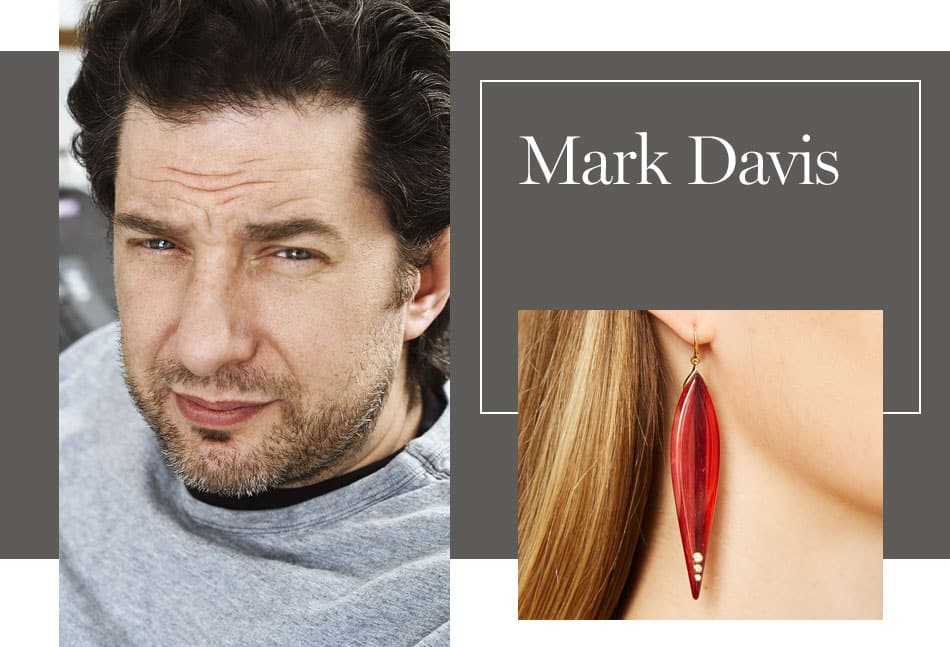 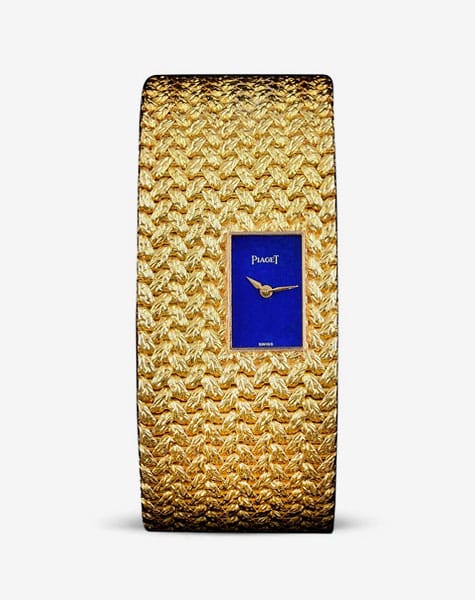 There’s a sly irreverence to the work of Brooklyn-based designer Mark Davis. Having begun his career as an estate jeweler, Davis is adept at creating pieces that nod to vintage styles while being unmistakably modern. He is best known for his use of Bakelite, an early form of plastic, formulated in 1907, that he elevates to lust-worthy heights by teaming it with precious gems. His interest in that tension between high and low drew him to this Piaget circa-1970 ladies wristwatch:

“The watch is a perfect example of how an extreme aesthetic sensibility can make the function of a utilitarian item seem secondary. Look at the asymmetrical placement of the face on the bracelet, the clean slab of lapis against the textured gold, the obvious consideration of design coupled with strict restraint. This is such a tight and simple design that speaks volumes by saying very little.”

Although Davis’s pieces have their own sleek refinement, they’re rarely quiet. He favors bold, vivid hues, working with a technicolor spectrum of vintage Bakelite that is painstakingly carved, inlaid and polished. There’s a whiff of Valley of the Dolls glamour to his signature cuffs — particularly when they’re stacked. 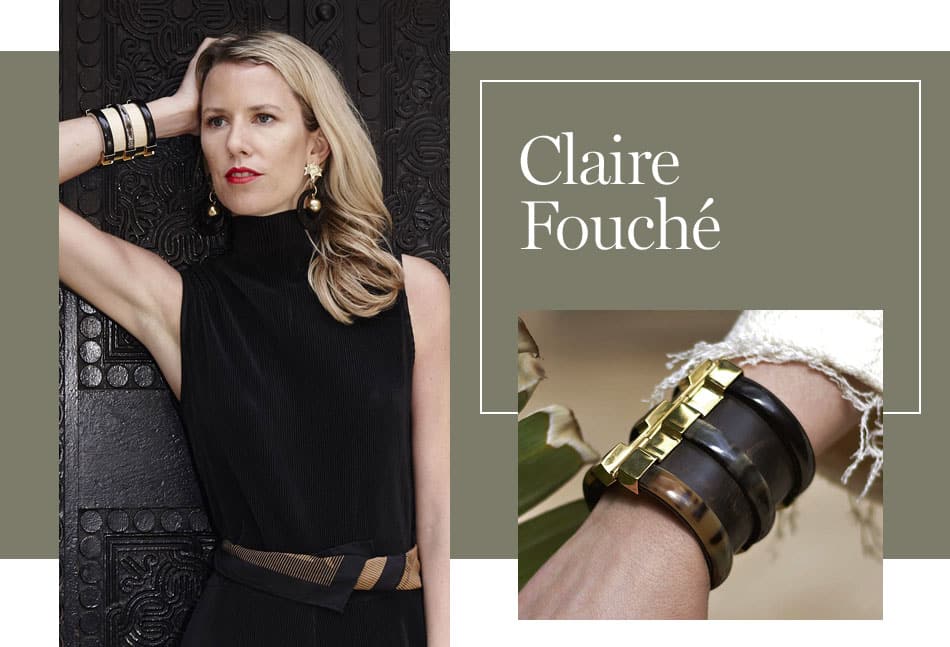 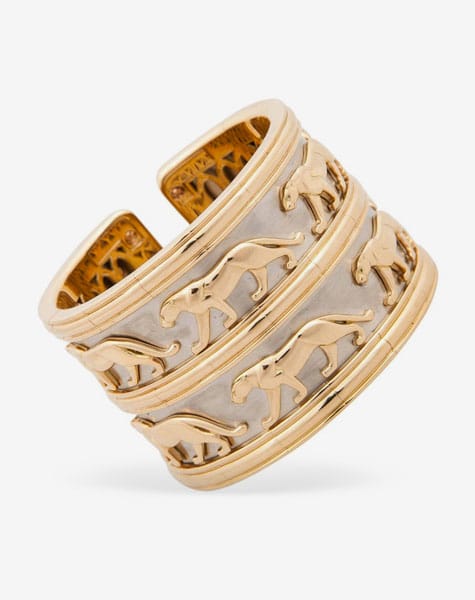 Born and raised in South Africa but currently based in London, Claire Fouché designs jewelry that marries traditional African aesthetics with a European sensibility. That same combination attracted her to this Cartier Art Deco cuff.

“The statement cuff is my favorite jewel to wear, personally. I’m very inspired by Art Deco architecture, so I love the graphic nature of these prowling panthers. And as I have an eye for craftsmanship, I appreciate the intricate gold work displayed by Cartier’s artisans.”

After a stint designing Fabergé’s haute joaillerie collections, Fouché launched her own line to bring the exceptional craftsmanship of Africa to the world of fine jewelry. Working with a team of artisans in Nairobi as well as in Italy, she creates pieces that pair unexpected materials like jacaranda wood and sustainably sourced horn with exquisite gemstones. The bold scale of African tribal jewelry is evoked in many of her designs, such as her sculptural, highly ornamented hoop earrings and beloved statement cuffs. There is an undeniably earthy, organic appeal to her palette of sepia tones, which she punctuates with the saturated color of gems like fire opals and emeralds. 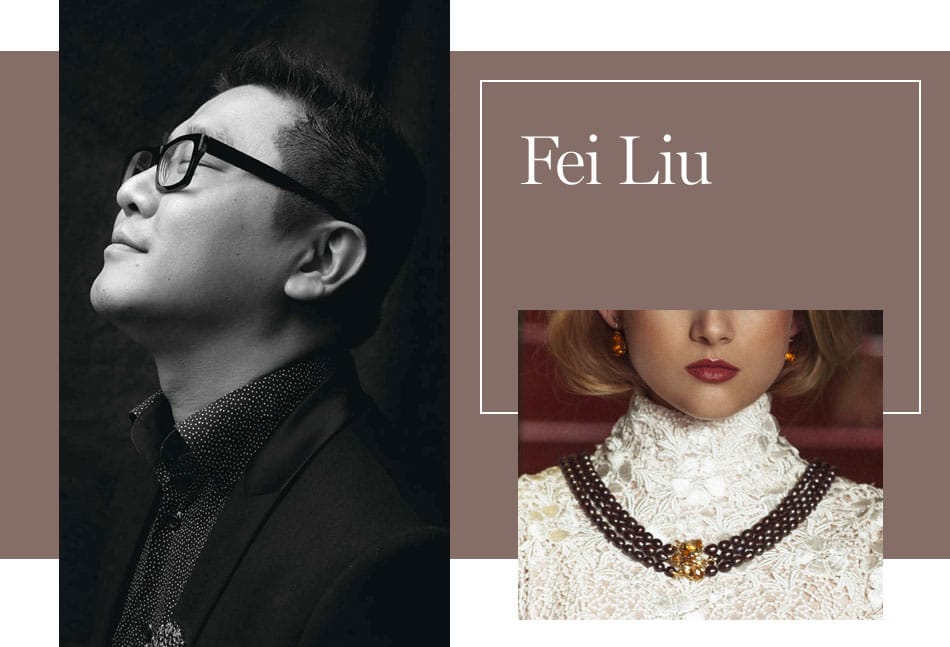 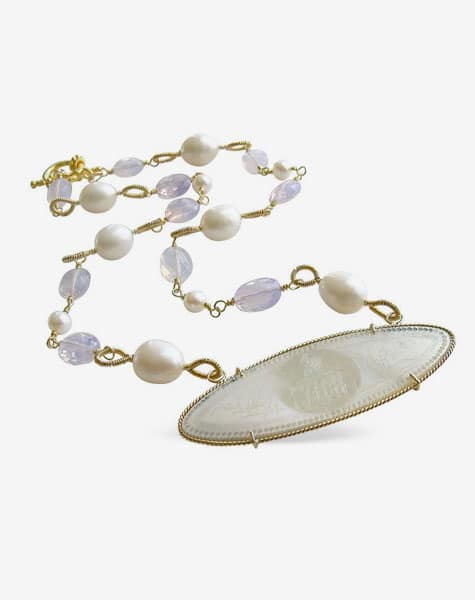 Chinese designer Fei Liu cut his teeth at the Birmingham School of Jewelry in central England, Europe’s oldest such institute. Thanks to his traditional Chinese upbringing and formal British education, Liu is fluent in the jewelry of both cultures. This necklace, showcasing a repurposed Chinese game chip from the early 19th century, features the kind of contrast that he explores in his own work.

“This design is so intriguing because it combines old and new as well as Western and Eastern elements, including a traditional Chinese carving technique. The mix of lavender moon quartz and baroque pearls brings the centerpiece to life without overshadowing it.”

In his own collection, Liu’s nods to East and West are subtle. Florals — a motif with universal appeal — are incorporated in many of his designs, such as earrings composed of clusters of diamond-pavé and carved-mother-of-pearl blossoms that climb up the ear. Elsewhere, Liu finds a harmonious balance between substantial colored gems and airy, delicate settings, as in pendants where amethysts or citrines appear to be floating against the skin. 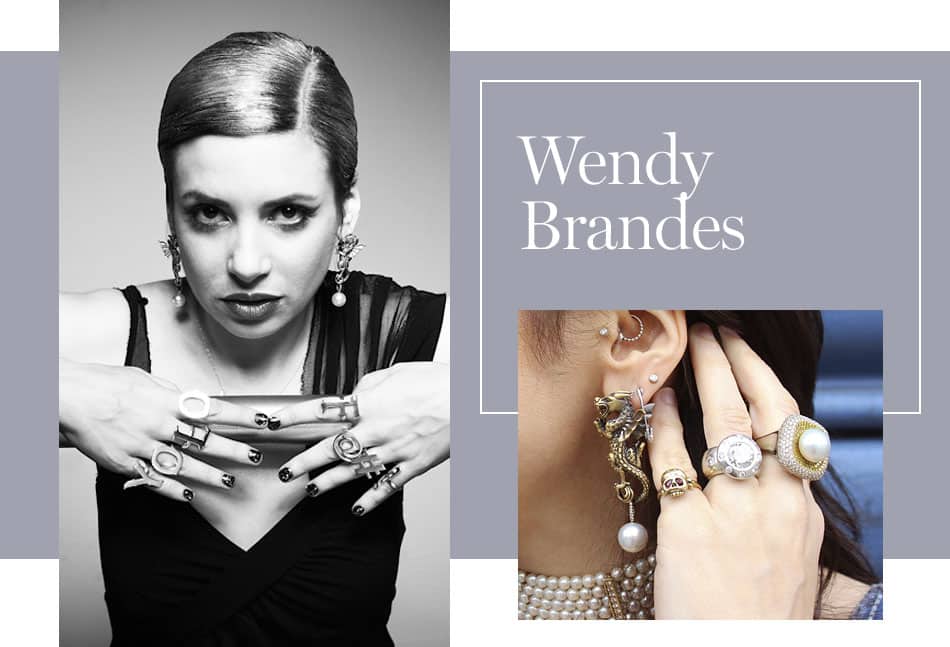 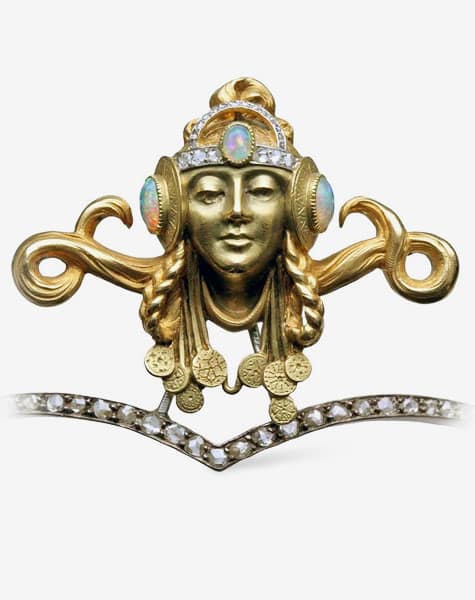 Before she began designing jewelry, New Yorker Wendy Brandes worked as a journalist for such major news media outlets as the Wall Street Journal and CNN. This experience gave her a feel for narrative — something she continually draws on in her designs. Brandes’s affinity for jewelry that tells a story is what attracted her to this Art Nouveau tiara.

“I didn’t discover this tiara until after I created my own Mary Queen of Scots snake tiara, but it easily could have been my inspiration for that work. It speaks to me on so many levels: the warmth of the eighteen-karat gold, the historical references, the emphasis on the female figure’s serene, self-assured expression.”

Brandes admires how the tiara highlights “the storytelling capabilities of precious metal,” a description that fits her own work. Many of her signature designs incorporate symbolic figures — for instance, a sculpted gold lion with blue sapphire eyes perched atop a diamond- and tsavorite-studded ring. The aforementioned Mary Queen of Scots tiara features two lithe snakes, their scales meticulously engraved and dotted with diamonds, that encircle the head and meet above the eyes to frame a lustrous South Sea pearl — certainly worthy of any modern-day queen.