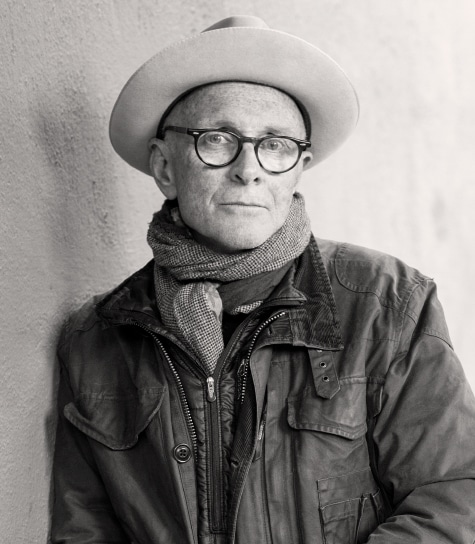 A new Vendome Press monograph by celebrated interiors photographer William Abranowicz (above), written with his son, Zander, gathers together images of the idiosyncratic homes of a host of creative individuals, including Ellen DeGeneres and Portia de Rossi, the terrace of whose house in Montecito, California, is seen at top. All photos courtesy of Vendome Press

Leafing through the photographer William Abranowicz’s American Originals: Creative Interiors (Vendome Press) was a pleasure on several levels. The monograph, which was written with Abranowicz’s son, Zander Abranowicz, offers an intimate view of 28 homes with a wide spectrum of owners, from celebrities like Bette Midler, John Mellencamp and Ellen DeGeneres and Portia de Rossi; to interior designers like Jeffrey Bilhuber, Robert Couturier and Federico de Vera; to design and lifestyle gurus like Martha Stewart. Every one of them has a distinctive style. And together, as the photographer writes in the introduction, “the people featured in this book provided me with some of my most valuable lessons in creating a personal space that is neither a real-estate nor a shelter-magazine version of living. There are no rules governing the interior decoration but one: to thine own self be true.” And this brings me to another pleasure, because his focus on the idiosyncratic reminds me that, during my time as the design editor at the New York Times Magazine and its style magazine, T, it was always a huge treat to work with Bill. 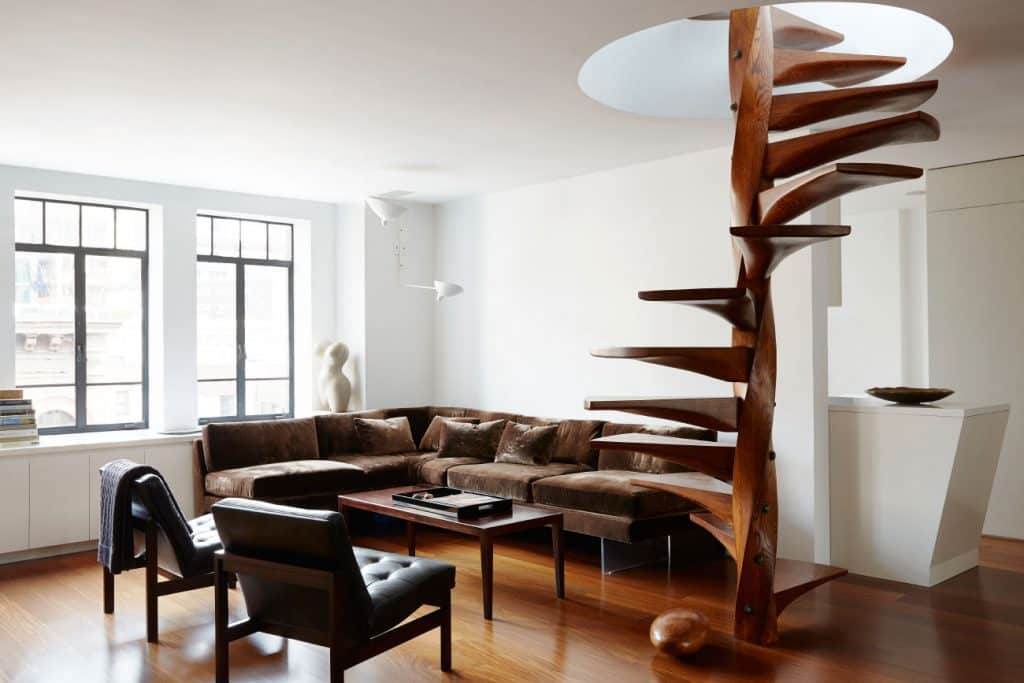 Writing about the New York City home of stylist, design editor and creative director Stephen Earle and his partner, Mitchell Gross, Abranowicz says the duo has “imbued the place with a sense of focused, honest glamour.” 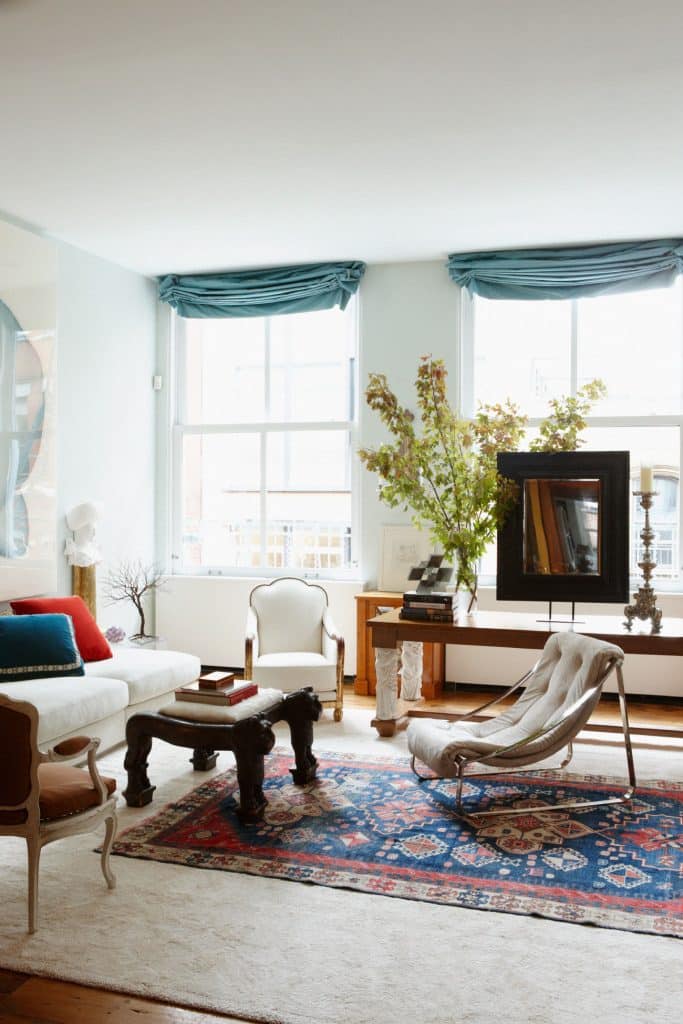 Abranowicz describes the home of interior designer Robert Couturier, in New York’s Soho, as “the domestic personification of a true gentleman.” The long oak table is by Maurice Savin and Jacques Adnet. 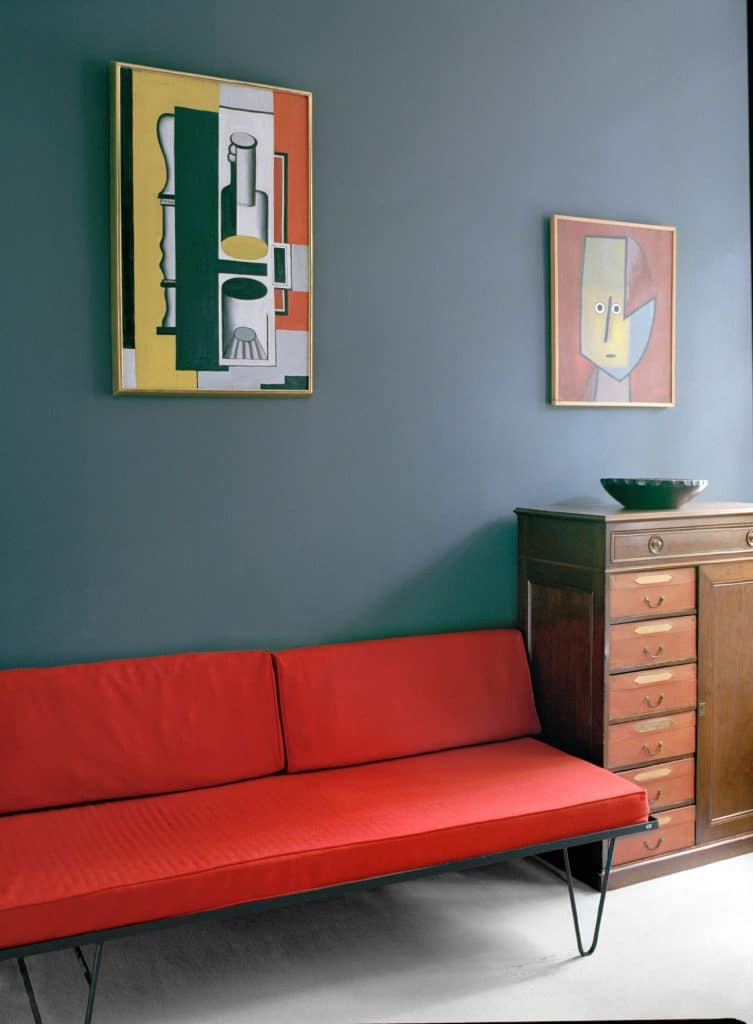 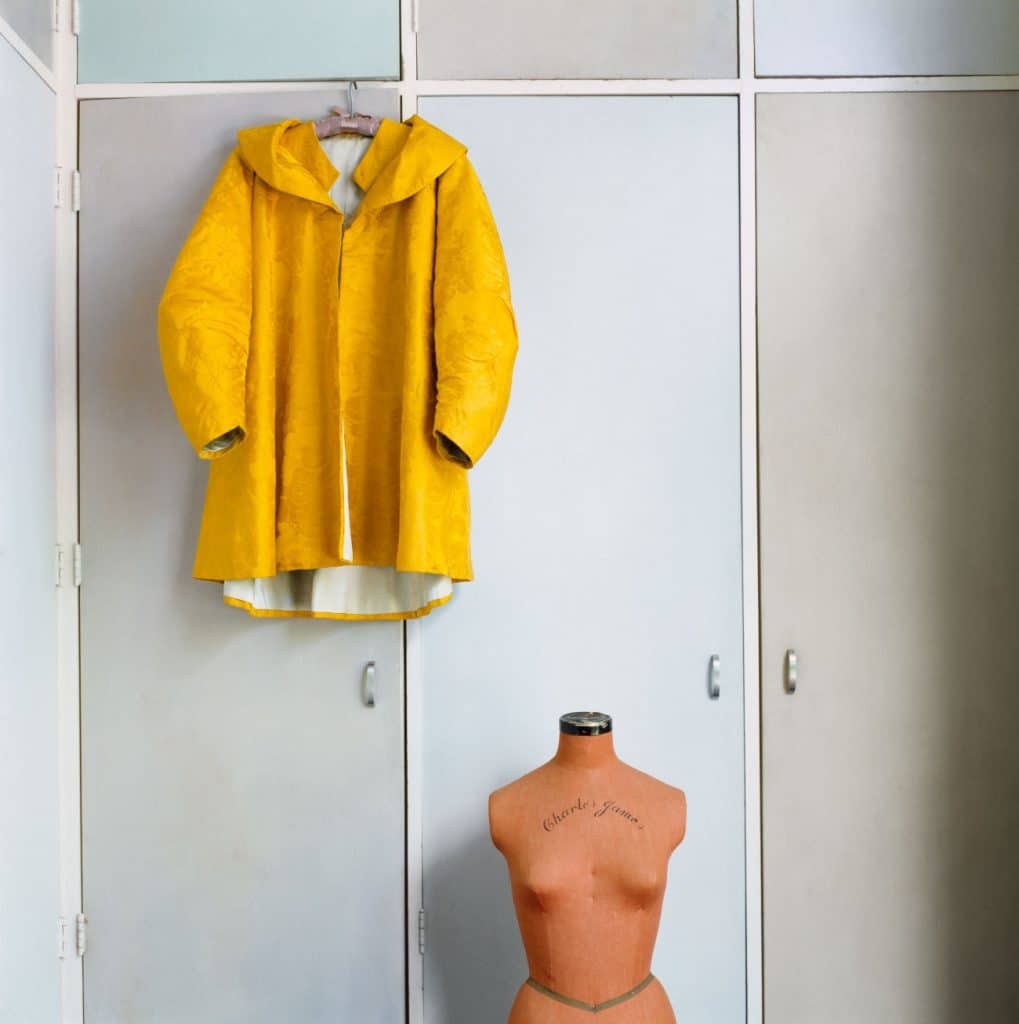 An evening coat designed for Dominique de Menil by Charles James hangs in the home’s dressing room.  James decorated the entire house in his only known residential project. 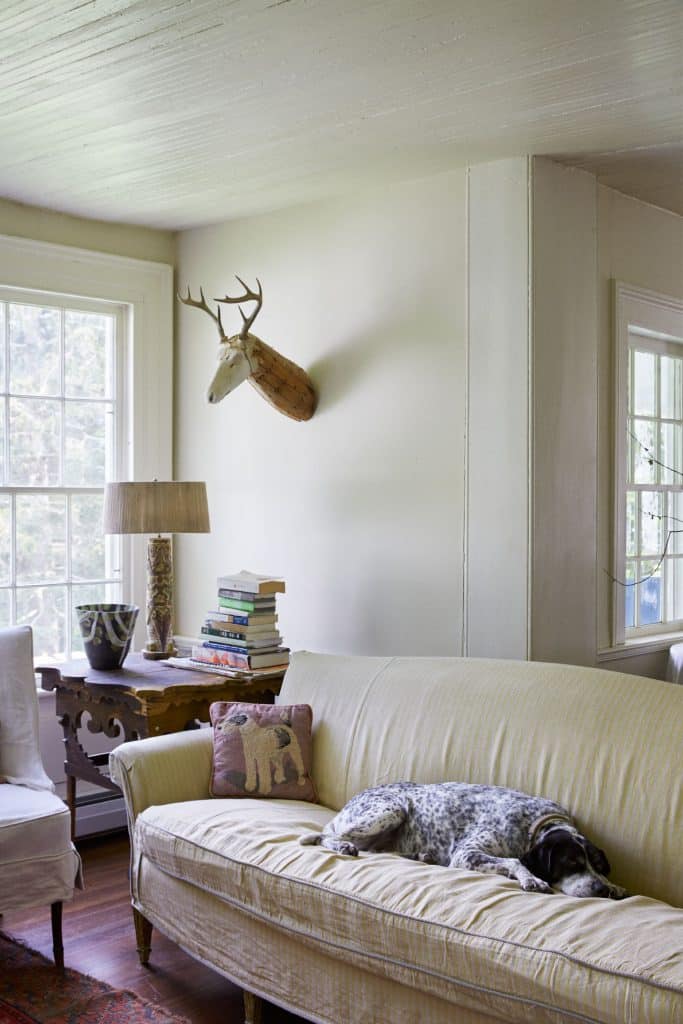 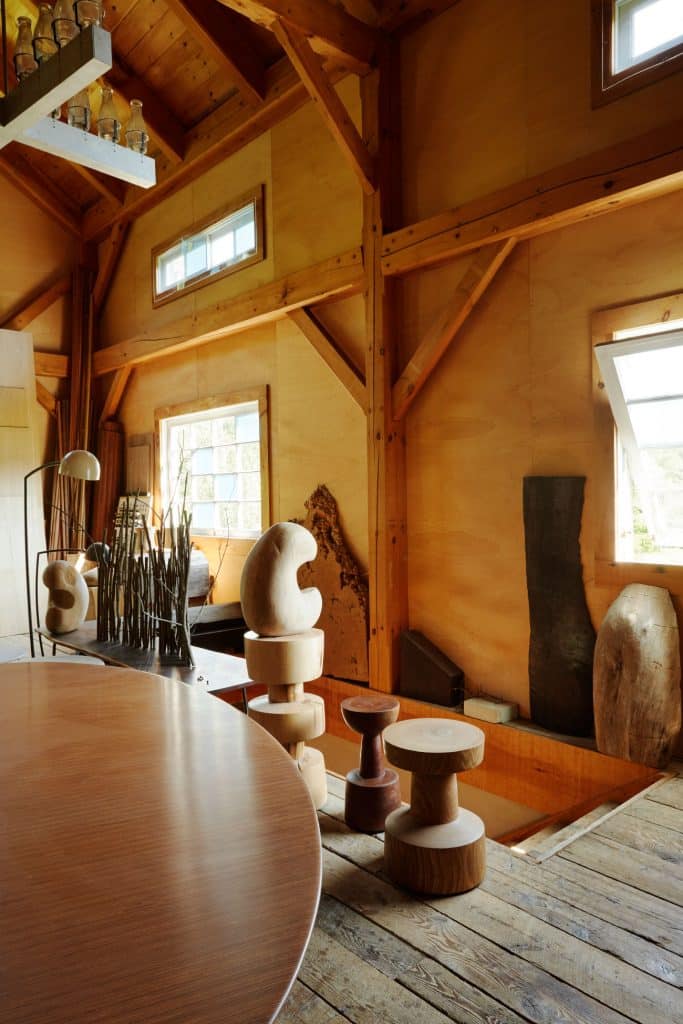 Shooting for the New York Times, Abranowicz captured the home (in a former church) and studios (in a barn and farmhouse) of jewelry designer Gabriella Kiss and her husband, sculptor Chris Lehrecke, in Upstate New York’s Hudson River Valley. 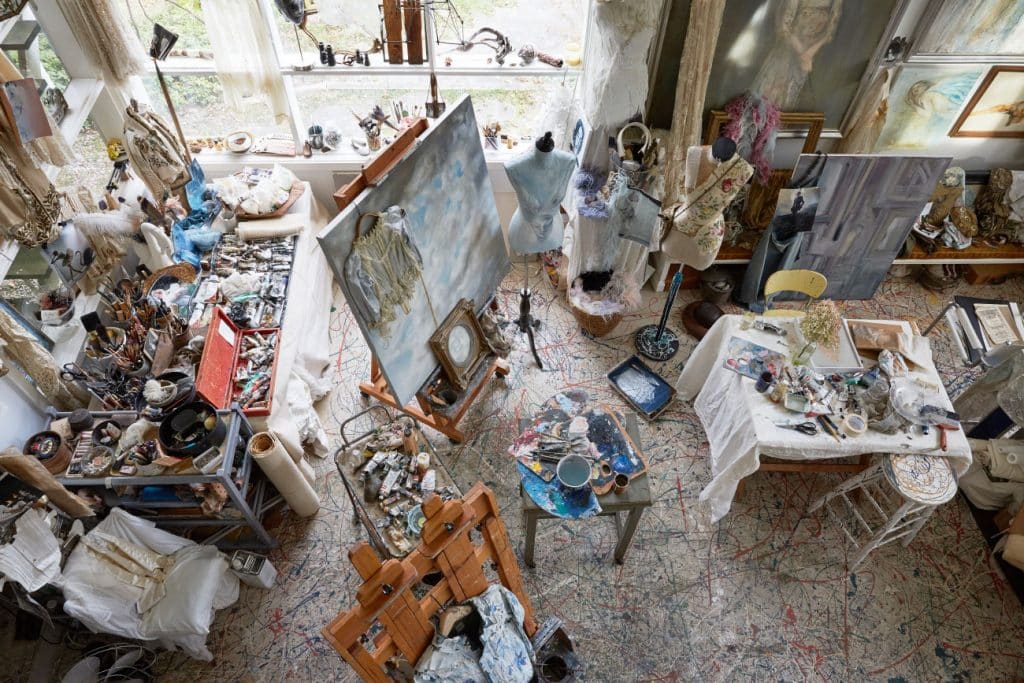 The Connecticut home of Daniela Kamiliotis — a polymath artist, set and costume designer and the senior vice president of women’s design for Ralph Lauren — and her husband, Thanos, reminded Abranowicz, he writes, “of Charleston, the legendary farmhouse in Sussex, England, that was the country retreat of the Bloomsbury group.” 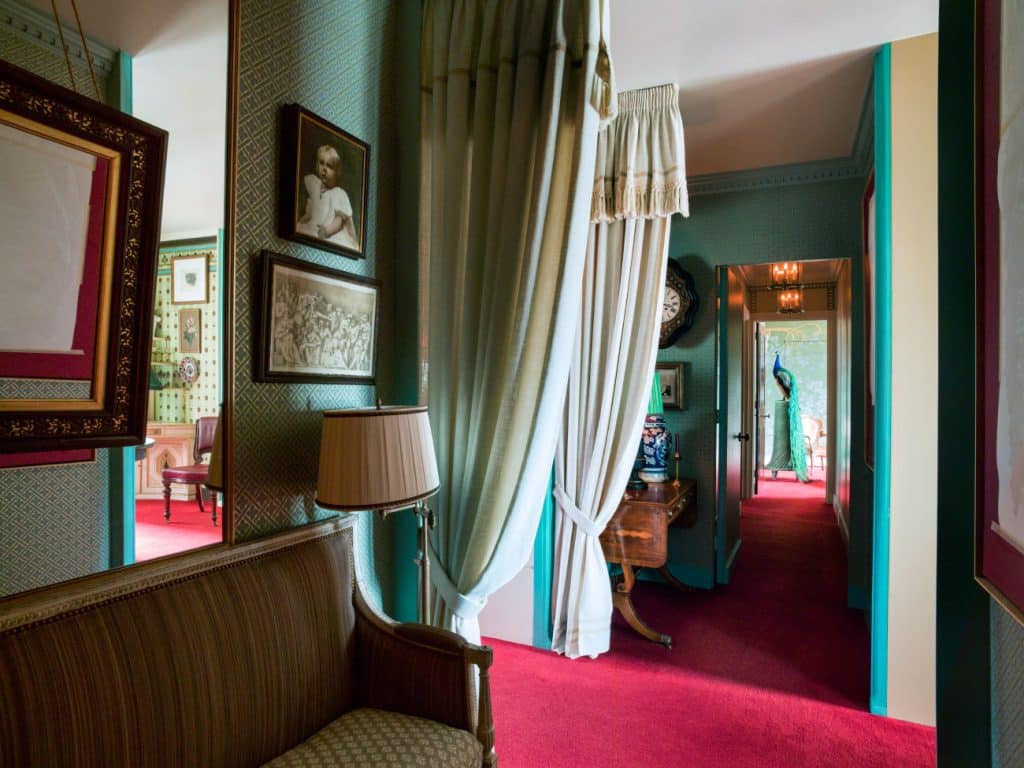 The atmosphere of interior designer Jeffrey Bilhuber‘s own homes in Manhattan and Locust Valley, New York, the photographer writes, “exemplify classic American design. I say American because it mirrors America: a multitude of voices, singing in many registers, harmonizing to form one song.” 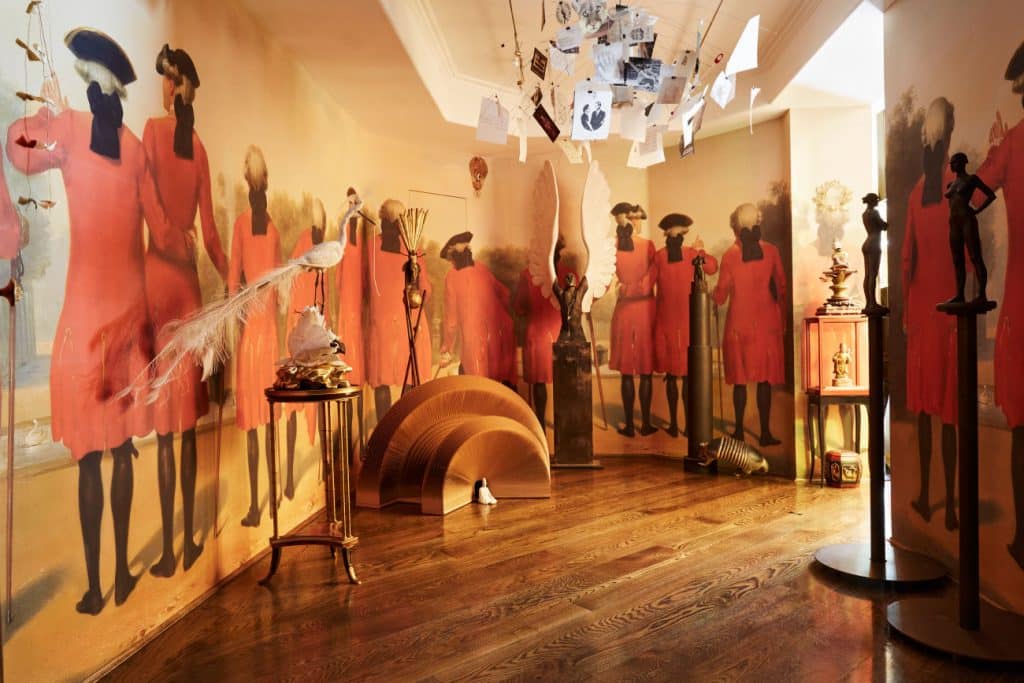 The art-filled gallery of the Los Angeles home of Valerie von Sobel — whom Abranowicz describes as a “multi-hyphenate activities, philanthropist, actress and fashion icon” — features a wall covering von Soble had made based on an 1839 Henri Félix Emmanuel Philippoteaux painting she saw in the Louvre. 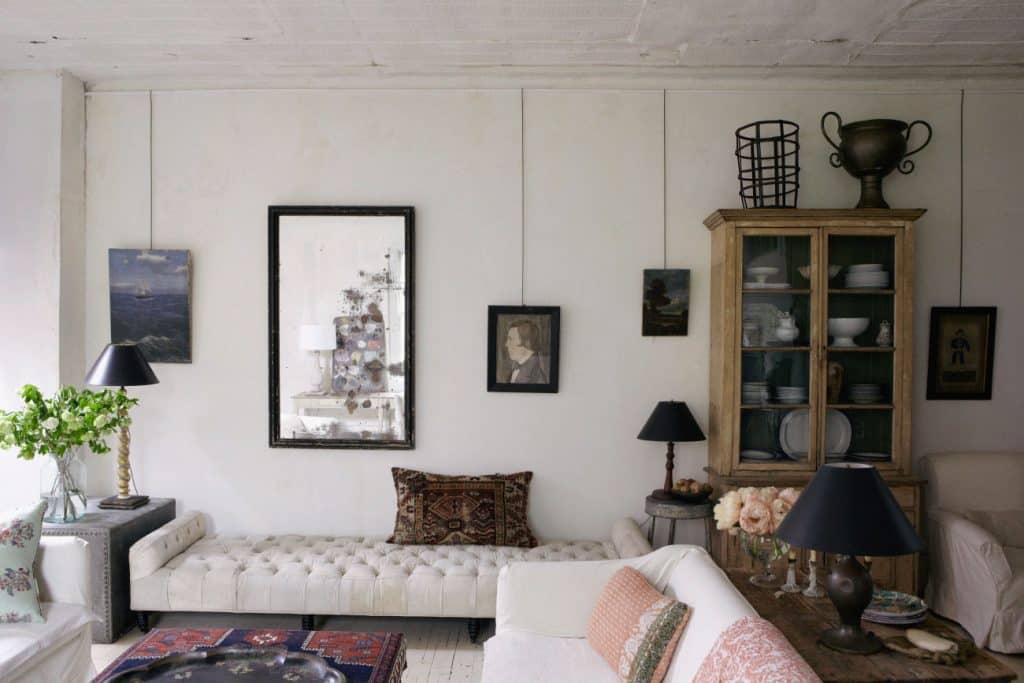 The living room of decoupage master John Derian‘s apartment in the East Village neighborhood of New York City hosts a mix of antique upholstery and new versions of 18th- and 19th-century designs created by Derian himself. 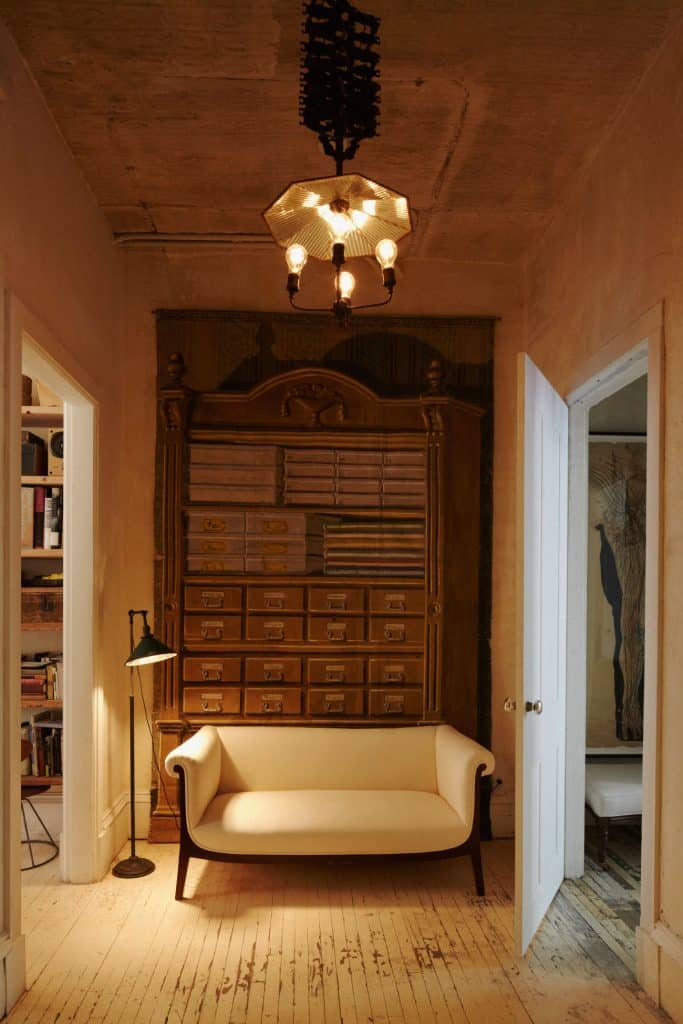 A vintage trompe l’oeil backdrop from an Italian theater hangs in the entryway of the Derian apartment. 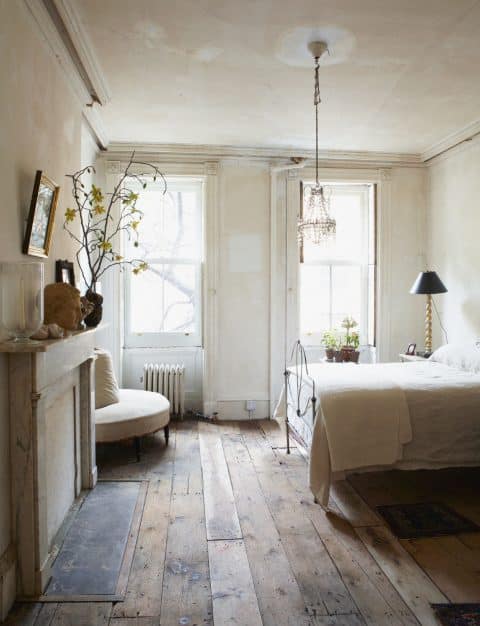 We collaborated on photo shoots for two interiors that are featured in the book: those of the Houston home of art collectors John and Dominique de Menil, which was designed by Philip Johnson and decorated by the American couturier Charles James, and the East Village, New York, apartment of decoupage master John Derian, who penned the book’s foreword. The two could not have been more different — the former a sleek glass box filled with art by 20th-century masters, the latter a loft-like walk-up with patched tin ceilings and tobacco-stained plaster walls. But both had in common their owners’ innate sense of style and appropriateness.

Bill trained his camera not just on the rooms but also on their details. In the de Menil house, these included the modest plywood closet doors, rather haphazardly painted by James himself, in Dominique’s dressing room, as well as her evening gowns, also designed by James, which she would hang on the shower-curtain rod to steam out the wrinkles. In Derian’s apartment, Bill revealed such features as exposed wood-plank subfloors, a coat of fresh paint that let the layers of time and tobacco seep through and the Italian theater backdrop that greeted visitors when they entered the space. For a story that is not in the book — on the elegant, well-worn Fifth Avenue apartment of the late fashion publicist Eleanor Lambert — Bill captured the unpretentious elegance of her bedroom, its walls lined in mattress ticking purchased from Geoffrey Beene and with stacks of magazines arranged on the floor.

“The people featured in this book have provided me with some of my most valuable lessons in creating a personal space that is neither a real-estate nor a shelter-magazine version of living.”

What these spaces share is their intensely personal, even eccentric, approach to design — which is what Bill loves best. He and I never spoke much about our own histories, but the first line of the book’s introduction sheds an unsparing light on the roots of his attraction to the unslick and the real: “Photography was the medium I was drawn to as my father was dying of alcoholism.” The medium offered Bill, then 17, a refuge and a sense of control, and interiors were among his first subjects — the insides of abandoned buildings, the messiness of a barber shop at the end of the day, an empty luncheonette. 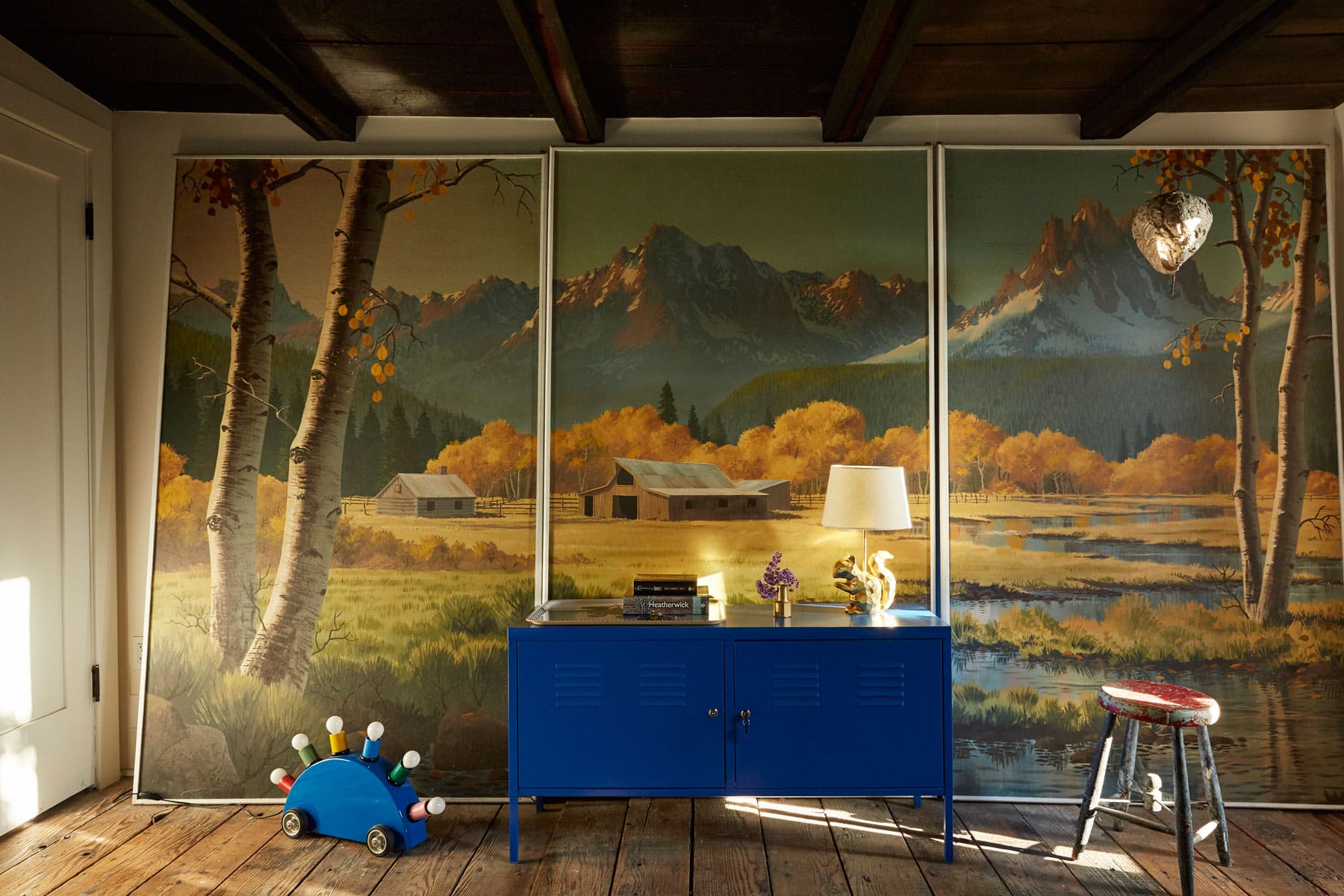 Abranowicz writes that the Los Angeles bungalow of tastemaker, design editor and writer Mayer Rus — whose columns often strike a wryly cantankerous note — reveals “the person behind the provocateur.” 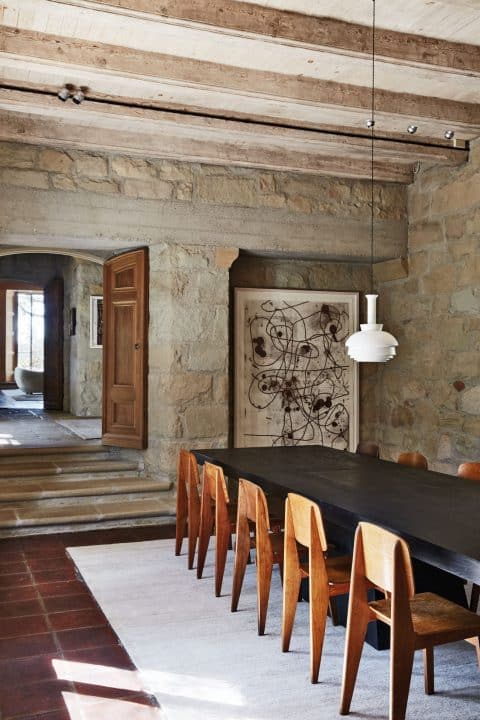 His fascination with these ordinary interiors led him to study with the photographer George Tice, known for his everyday scenes of small-town America. Bill later worked as a printer for Tice, who indirectly led him to his next job: printing for and later assisting Horst P. Horst. The two mentors were quite different. Apart from the fact that they documented diametrically opposed worlds, Tice disdained commercial photography, while Horst firmly believed that making art was perfectly compatible with working for magazines like Vogue and House & Garden — a combination that Bill has also plied, and quite successfully.

What Bill describes as his painterly approach to light can be seen in Tice photographs like the 1970 Joe’s Barbershop, Paterson, New Jersey. But Bill was also inspired by painters like Johannes Vermeer and Edward Hopper and by photographers from Edward Weston and Walker Evans to Irving Penn and Richard Avedon. Bill’s photographs are almost elegiac, although never melancholy. They don’t simply document a room; they capture a moment in time.

One of his favorite quotes about light is from John Fowles’s novel The Magus, in a description of a painting that “set a dense golden halo of light round the most trivial of moments, so that the moment, and all such moments, could never be completely trivial again.” In capturing the everyday moments of domesticity — the arrangement of objects on kitchen shelves, the creative clutter of an artist’s house and studio and the stillness of a living room with a dog asleep on the sofa — Bill Abranowicz’s photographs tell a story about the lives of the people who live in these spaces. And in them, we see our stories, too. 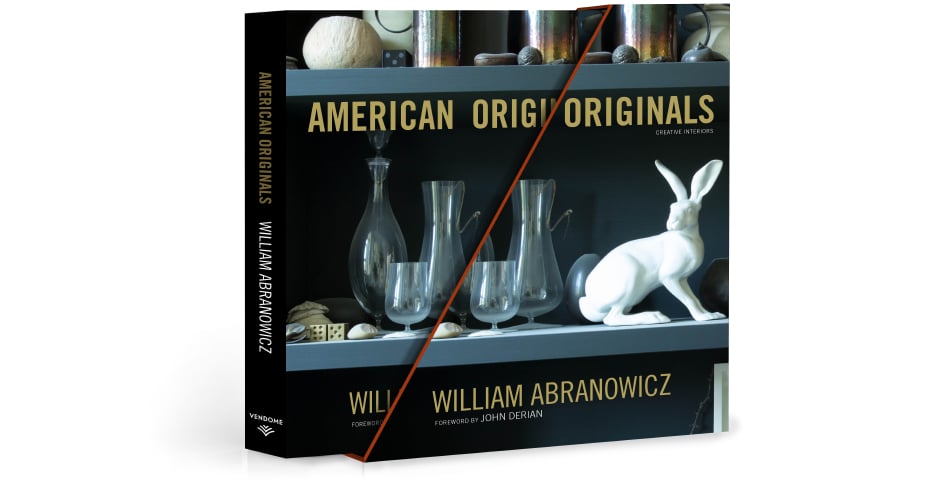