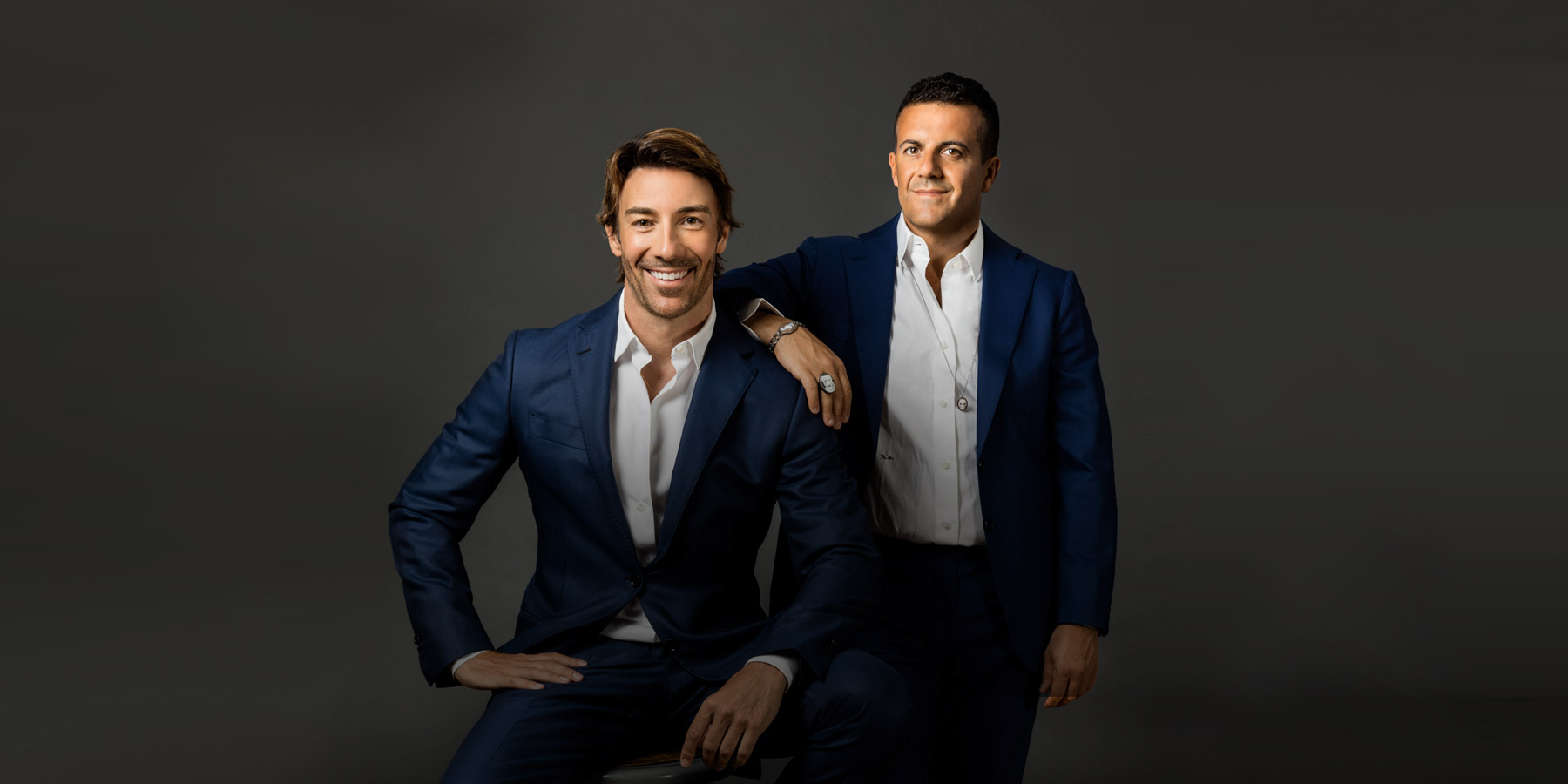 The Golden Touch of Faraone Mennella

How the two Neapolitan fellows behind the jewelry-design firm and luxe boutiques charmed their way onto the American scene — and into the hearts of collectors worldwide. 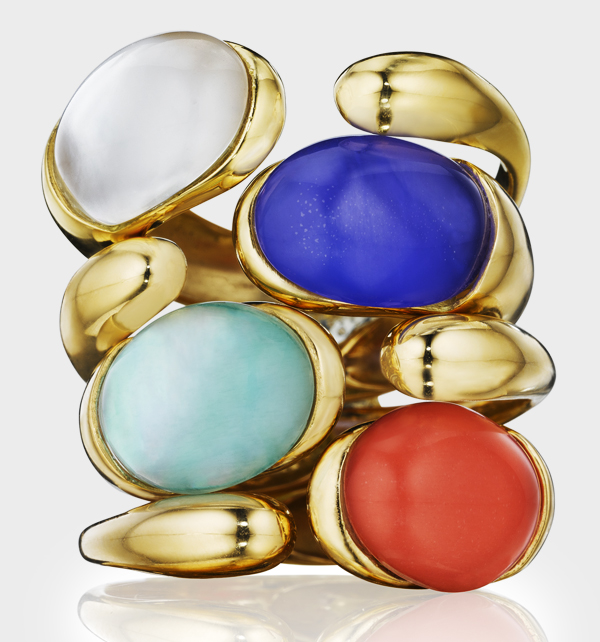 Above: Perfect for Valentine’s Day, rings from Faraone Mennella‘s Gocce collection are made of 18-karat gold set with mother-of-pearl, blue agate, aquamarine and coral. Top: Refusing to follow fleeting trends, Roberto Faraone Mennella (left) and Amedeo Scognamiglio craft modern yet timeless jewelry under the moniker Faraone Mennella, with boutiques in New York, Capri and London. Amedeo is wearing a few of the cameos he designs as a side project. Photos courtesy of Faraone Mennella, unless otherwise noted

When two childhood friends from Italy, Roberto Faraone Mennella and Amedeo Scognamiglio, launched their jewelry firm in New York in the spring of 2001, they were referred to as “the boys” — sometimes affectionately, other times patronizingly. This was partly because their last names were, for some, a mouthful to pronounce, and partly because they entered a massively crowded field with the verve of a couple of teenagers, wide-eyed and ready to take on the world. Roberto was 28 and Amedeo was 29, so they were hardly kids, but their exuberance, which they exhibit to this day, was obvious.

Mind you, the talent was there. Amedeo started carving cameos while still in his teens. (It was a family business, started by his great-great-great grandfather.) Roberto spent four years at the Parsons School of Design and always had an artistic flair. Like Amedeo, Roberto comes from a family in the coral industry.

The two might have started their business in their native Naples, where they still have a workshop, but New York beckoned. It was there they got the experience they needed: in the daily hands-on crafting of jewelry with talented artisans and in surviving the hard knocks and gaining the perspective that comes from being in the fray in good years and bad — 2008, in particular.

They called their company Faraone Mennella, after Roberto’s Neapolitan family, because it has an aristocratic ring to it. (Indeed, the family has claims to nobility.) The introductory line was a collection of easy-to-wear gold earrings, bracelets and necklaces that were as at home at a Mediterranean or Caribbean resort as on the streets of a big city. Moderately priced and modern in their simplicity, the collection was an instant hit.

They launched at Bergdorf Goodman and Neiman Marcus, where they would develop what is now an intensely loyal clientele. Their jewelry even appeared in an episode of Sex and the City. What more could two budding jewelry designers ask for? I met Roberto and Amedeo soon after their debut and was, like many others, struck by their vivid personalities as well as by their creations. They balance each other, in that Amedeo is the live wire, irrepressibly social, while Roberto is the introspective thinker. Amedeo has a marketing idea every minute, and Roberto homes in on aesthetics. Yin and yang, or however it’s expressed in Italian. But make no mistake — they both participate in the end products. 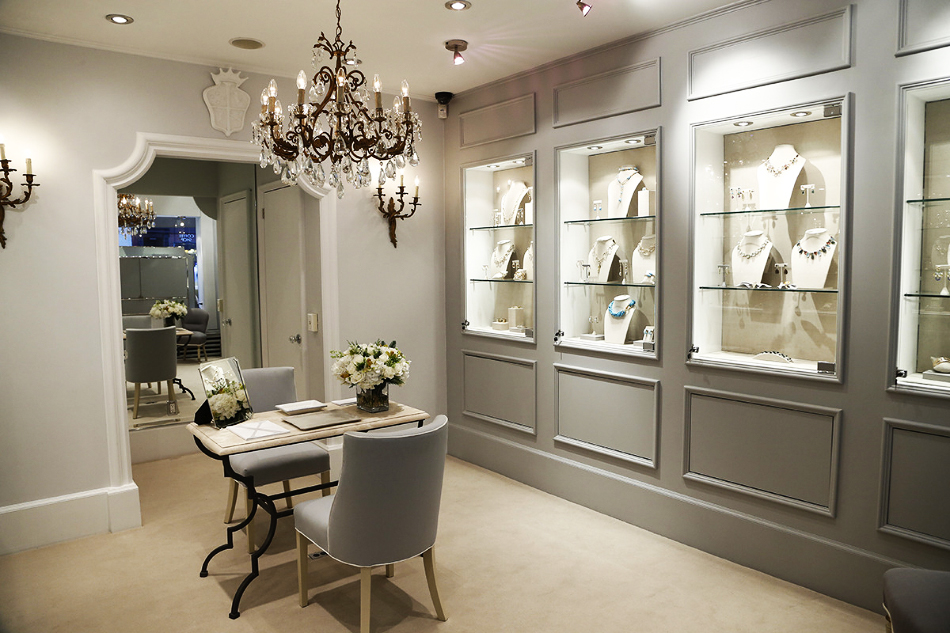 Roberto designed and decorated each store himself, including the New York showroom (above), with signature gray paneling, 19th-century Italian chandeliers, Art Deco furniture and discreet display cases. Amedeo selects the playlists, which are based on 1970s Italian movie soundtracks, adding to the dolce vita ambience. 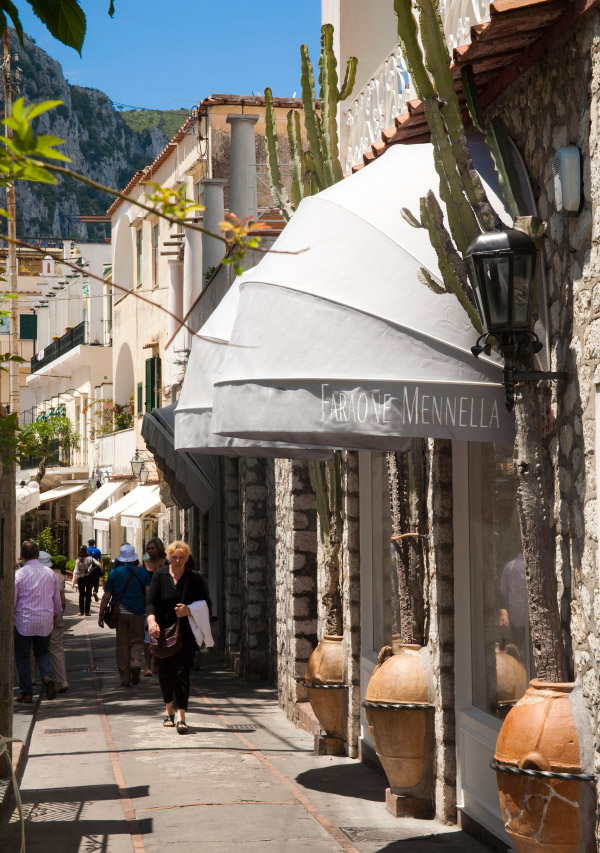 The Capri boutique is located on the storied island’s Via Fuorlovado.

Faraone Mennella today is bigger and broader. In addition to that first line of simple gold pieces, the duo now creates high jewelry — sometimes one-of-a-kind gem-encrusted creations that sell for hundreds of thousands of dollars. The offerings, newly on 1stdibs, include selections from the original collection as well as the newer fine jewelry. To help widen their customer base, Amedeo and Roberto each sell their own far less expensive costume collections on the Home Shopping Network, where they have had great success.

Amedeo’s parents continue to run the family cameo business in Torre del Greco, outside Naples, and the firm also does big business in Japan, where one of his brothers is based. The American branch, under Amedeo’s direction, has taken an entirely new direction, carving cameos with less-expected subjects, like skeletons, snakes and monkeys. They’re a little ghoulish and extremely cool, as appealing to men as to women.

Roberto and Amedeo now have three Faraone Mennella boutiques — in London, New York and Capri — as well as a continued presence in Bergdorf Goodman and select Neiman Marcus locales. The two are boys no more. My most recent conversation with them took place at their chic, compact boutique (designed by Roberto, who might have been an architect if his life had taken a different turn) on Lexington Avenue near 70th Street, just down the street from the Amedeo store, which specializes in those unconventional cameos.

Jewelry companies, especially startups, come and go. You have now been in business for almost 15 years. How do you account for your longevity?

AS: We always had the consumer in mind. When we first opened our business, we didn’t know anybody. But we had a vision, and we stuck to our principles, aware maybe it would mean having fewer celebrities and less editorial support. It takes years to acquire a client. It takes a minute to lose one.

RFM: We decided to present something that, at the time, was not out there. One of our first offices was at 57th and Fifth, where we were surrounded by the Big Boys — Tiffany, Van Cleef and Bulgari. If we’d decided to go up against them, we would have been in a game that was beyond us. 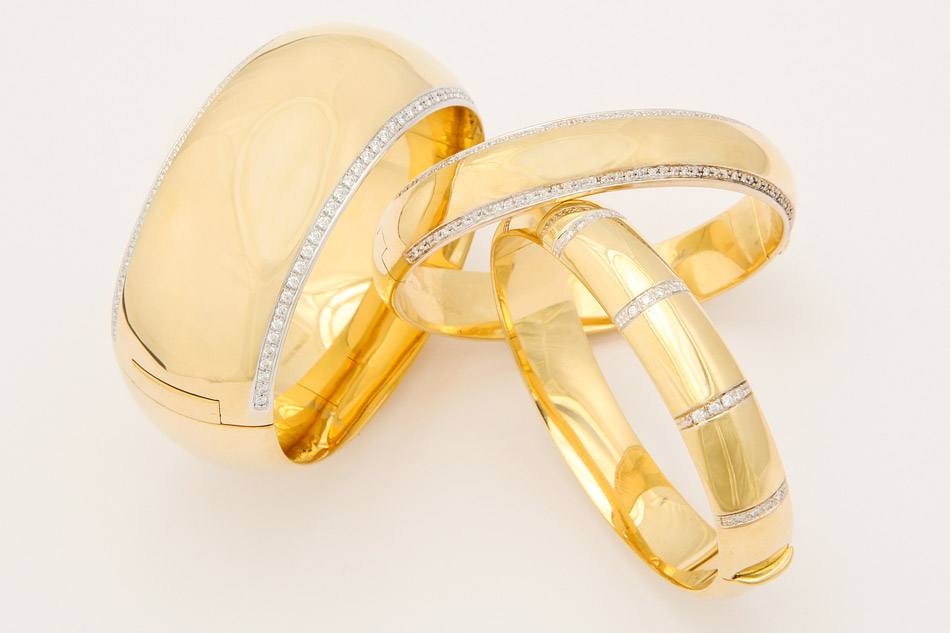 The Palazzo collection is made with 18-karat gold and white diamonds. Photo by Josh Gaddy 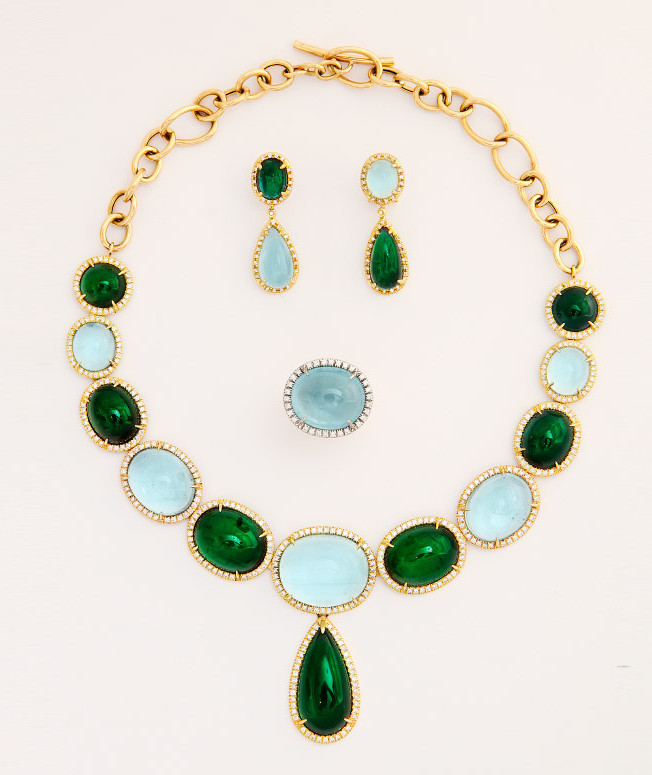 The Couture Belgravia set is made of 18-karat gold, aquamarine, green tourmaline and diamonds. Photo by Josh Gaddy

So you chose to cultivate a different customer base?

AS: The support we’ve had has always been from women, not just our clients but also from women in the business — buyers and editors. Those are the ones who always helped us.

How would you describe the relationship between fashion and jewelry?

RFM: They are two entirely different things. Jewelry is a serious enterprise, an object of art. It is collectible, not a fad. That’s why we deliberately avoid being trendy.

AS: Sometimes a buyer might ask us to make, let’s say, fingertip rings, a design that is “of the moment.” We say no, because we know it won’t last. Sure, it is true that some consumers want what is hip, chic, cool. But our clients are a bit conservative, so we stay true to them. We don’t want to be edgy. Our mantra is, “Never betray your customer.”

RFM: What we do is jewelry, not fashion. It has a long life. Sometimes it takes years to court someone over a single piece. Ours is a very social kind of work. We spend time with our clients, not only in our stores but also on the outside. We take them to lunch and to dinner. Many become our friends.

Where do you plan to take the company as you head toward your fifteenth anniversary?

AS: We feel as if we are coming full circle. We’ve seen the highs and the lows, witnessed and came through the economic crash in 2008, and have seen other companies go out of business. Now we are putting our entire focus on the product.

RFM: Amedeo told me to spend more time in the workshop, because the success starts there.

Tell me about the events you host.

AS: As you know, we love to throw parties. We’ve done one every year since 2012 in Capri to celebrate the opening of our Italian flagship boutique. It takes place on the first weekend in July and is called “Viva Capri.” Last summer, we transformed the entire piazzetta into a Faraone Mennella Square. Anything we do for our fifteenth will have to be exceptionally eventful, because it is a true milestone.

The exterior of the New York store has a studded blue facade that foreshadows the gems inside.

AS: Our next opening will be in Miami, as soon as the right location becomes available. But we are also considering a second Amedeo boutique in downtown Manhattan. It would be entirely devoted to the men’s jewelry collection.

Apart from experience, what do you have now that you lacked when you began in 2001?

AS: One word: confidence. 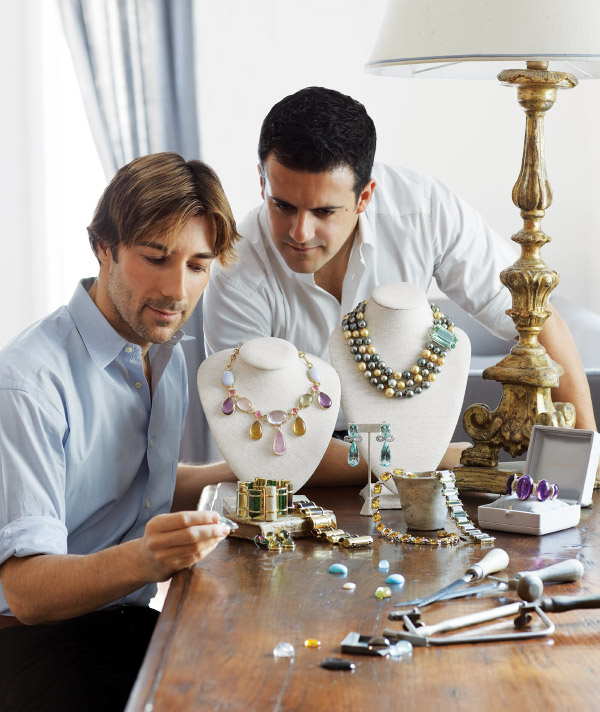 Roberto and Amedeo brainstorm concepts for their Couture collection of one-of-a-kind and limited-edition jewels, crafted in-house by skilled artisans.

But it’s more than that, isn’t it?

AS: When we started, there were a lot of private or family-owned businesses around. Some still exist, but many disappeared. Others became public or were sold to larger companies. In the process, they lost their soul.

RFM: Once you lose that, you might as well pack up and go home.

There doesn’t seem to be any chance of that happening to  you. Is there any other business besides jewelry you see your company going into?

RFM: Our dream is to go into the hospitality industry by creating boutique hotels. Our brand has always been about lifestyle. Because we travel so much, we have both become knowledgeable and critical about hotels — the service, the accommodations and the food. It is almost inevitable for us to eventually go into the hotel business.

Are you taking advance reservations? If so, please book me a room with a view. 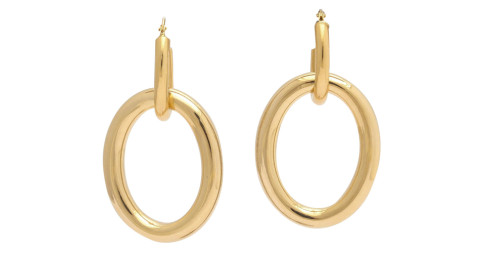 “Mama is one of the most iconic and best-selling of the Faraone Mennella collections, for its simple geometry, timeless elegance and perfect proportions.” 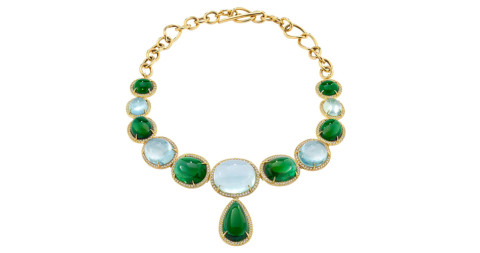 “Masterpieces from the Couture collections often start from the magic of rare precious stones, which we personally source all around the globe. The design is always conceived with a ‘muse’ in mind, a real woman (a client or a friend whose style inspires us) who would and will look perfect wearing the specific piece of jewelry. Gems and women come to a full circle.” 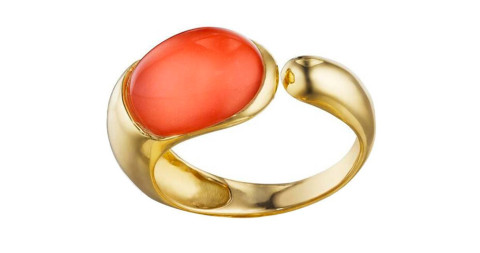 “A small drop of color and simple lines define this everyday, precious accessory.” 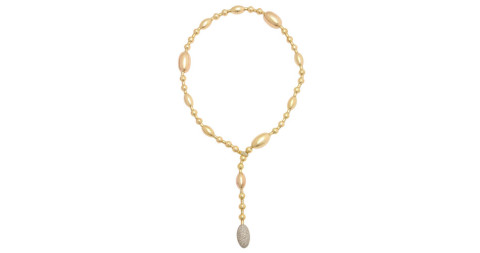 “This modern evolution of a classic long chain, transformed into a versatile and flexible necklace, represents our urge to create new collections but always with the same signature DNA.” 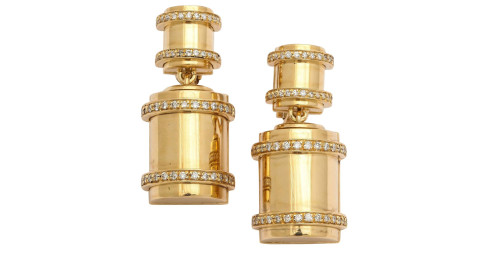