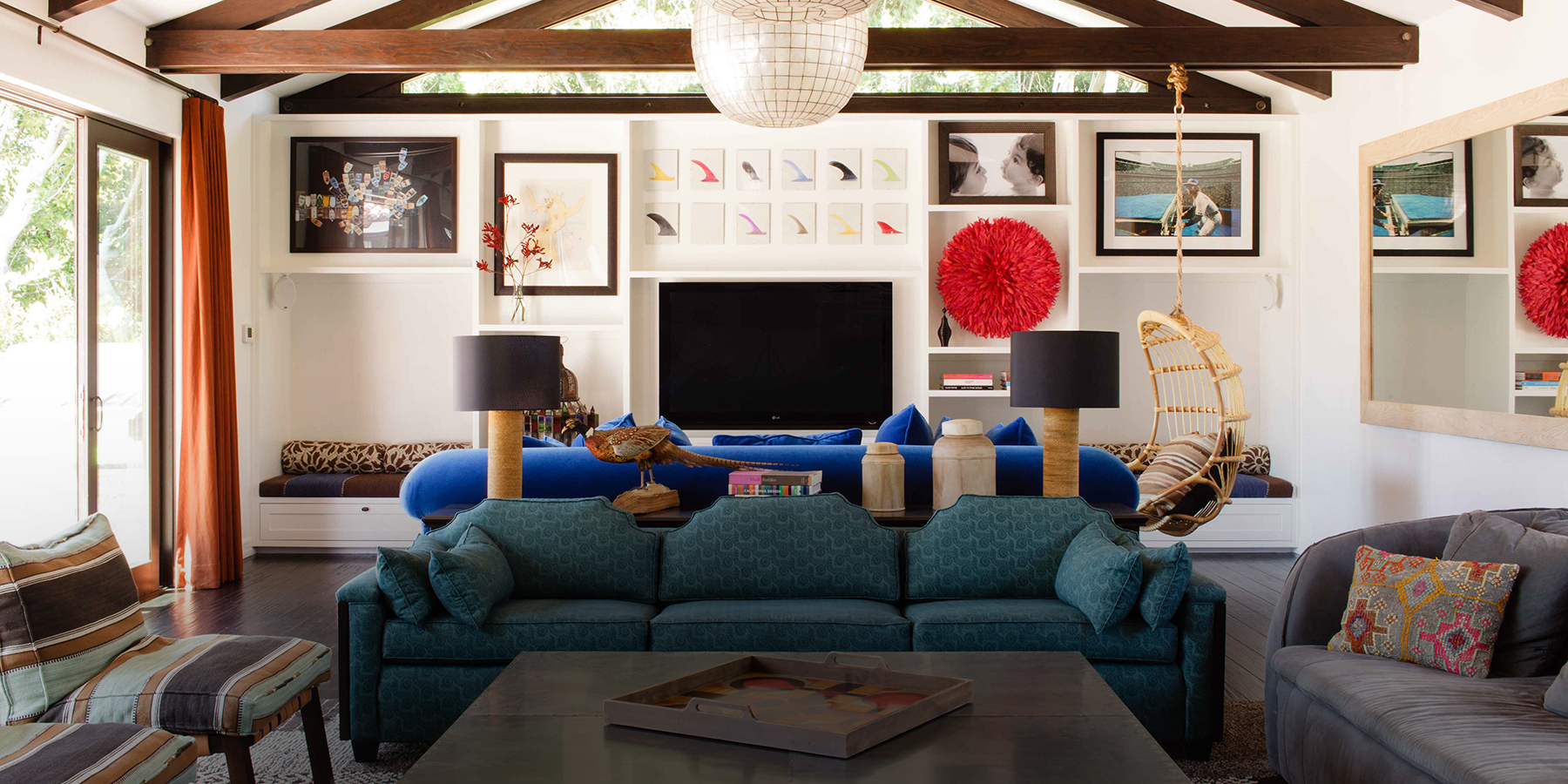 With her five-year-old studio, Reath Design, New York City-born, Los Angeles–based interior designer Frances Merrill has tackled projects up and down California, bringing to her work a mix of materials, colors and no shortage of fabulous wallpaper.

Frances Merrill founded her Los Angeles-based interiors studio Reath Design in 2009, after working at the L.A. firm Commune Design (portrait by Lizzie Garrett Mettler). Top: In the living room of a home in Malibu’s Point Dume area, Merrill used a series of sofas to divide the large space into several intimate areas. Photo by Andre Vippolis

On a recent sun-baked afternoon in the Silverlake neighborhood of Los Angeles, Frances Merrill sips an iced latte in the last sliver of shade available on the patio of Broome Street General Store. Taking a break from preparing a presentation for owners of a historic craftsman home, the busy designer has left two assistants and an intern amidst a sea of inspiration boards at her office just a few blocks away. En route, she dropped off a package at her daughter’s school, literally right next door.

“I grew up in Greenwich Village,” Merrill says. “This neighborhood has a similar feel, everyone knows each other, and it feels comfortable.”

Merrill also lives not far away, with her husband, Chris, and their two children: Honor, five, and Rex, two. Although she was raised in New York City, she often visited relatives in Maine, Hawaii and California, so her work as a designer has a seemingly effortless integration of both coasts’ aesthetics — with a dash of the islands. It’s not unusual to see in her projects, say, the iconic Palms wallpaper from the Beverly Hills Hotel, alongside fur beanbag chairs. “I’ve had a mix of a lot of influences, which I think has helped me with my work,” she says.

Merrill’s first job in Los Angeles was working in sales and special projects for Jamie Rosenthal, owner of the city’s cult-favorite Lost & Found shops, and the second was for Commune Design, where she acted as project manager for such high-profile commissions as the retro-hip Ace Hotel & Swim Club in Palm Springs. She likens both work experiences to school, in that she was constantly being challenged and surrounded with new references and a genuine, intellectual approach to design. 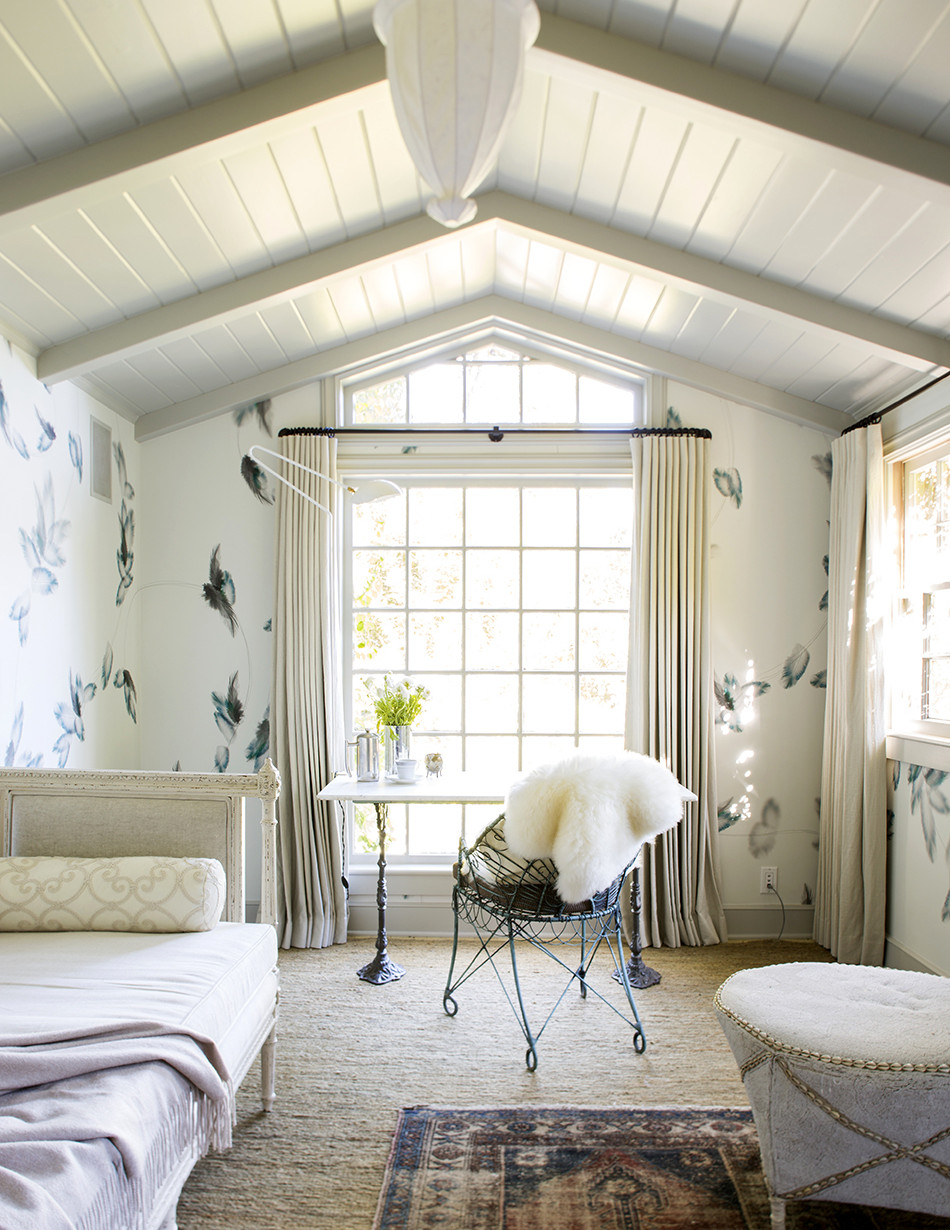 A light-filled room in a residence in L.A.’s Brentwood neighborhood serves as a home office-cum-retreat for a mother of two small children. Merrill sourced the desk from Obsolete, in nearby Culver City. Photo by Teri Lyn Fisher

Shortly after Honor was born, Merrill struck out on her own, launching Reath Design in 2009; since then, she has worked with clients throughout California, from Malibu and Ojai to, most recently, Berkeley. “The style of the client and the architecture of the home are as varied as the locations,” she says. “It’s what keeps it interesting.”

And though no two projects are alike, common threads persist. She uses wallpaper with abandon, especially bold graphic designs or flowery vintage patterns, which she often deploys as a backdrop for a stylish mix of furniture and objets from a variety of eras. “Mixing color and pattern is one of the things that I think I’m really good at,” she says. “But more importantly, I like to mix color and pattern and then make a room feel like there are layers — like it has slowly been created over time.” Which leads to another common thread: her uncanny ability to create an impactful design statement, whether with a bold trim color, a quirky upholstery choice or, as in the case of one Brentwood home, by hanging brightly colored Bollywood posters against an otherwise subdued palette.

Wed to the idea that the client’s personality always comes first and should be reflected in the project, Merrill has a few standard questions she likes to ask before getting started: Do you read in bed? Do you collect anything weird or have weird hobbies? And so forth. 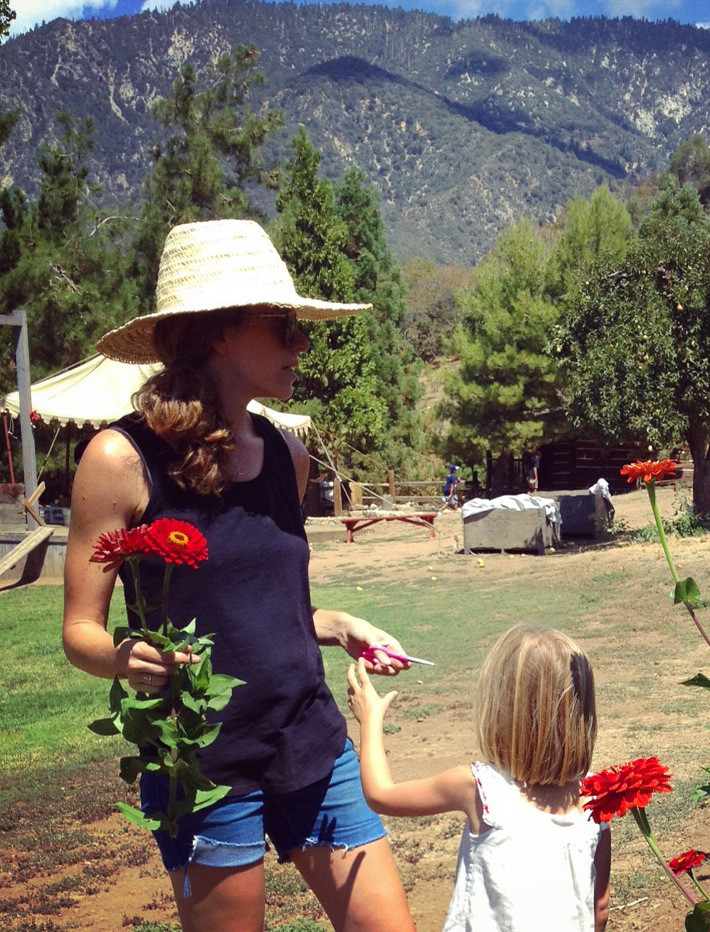 “I find that being intuitive is one of the greatest assets I have as a designer,” she says. “At the end of the day, the clients are the ones living in the house, and I want it to be the best version of what they want or dream that it could be.”

I often like the color palettes in fashion ad campaigns — Bottega Veneta and Acne have good ones.

Jason Bell, Wilco — I need to find some upbeat music to play in the office. 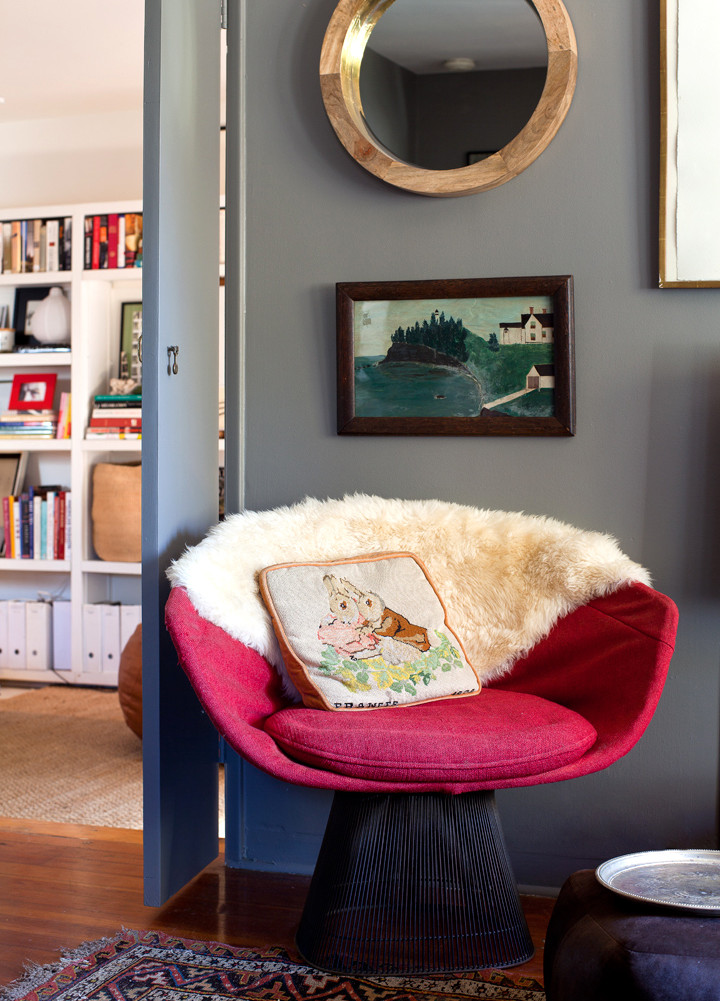 In Merrill’s former home, a Warren Platner chair she found at a yard sale sits beneath a painting of the place in Maine where her husband grew up. Merrill’s grandmother needle-pointed the Peter Rabbit pillow when she was born. Photo by Teri Lyn Fisher

Favorite Place in Your Home:

The shower in our bathroom has a window at eye level that looks out onto the treetops, offering a very green view in a big, dry city.

The C Arthur at Café Stella, in Silverlake and whatever they recommend at Silverlake Wine.

Detective novels from the 1930s and ’40s — I love Rex Stout and Ross Macdonald. Also a towering stack of magazines.