Every Nook of This Houston Penthouse Is Customized, Down to the Secret Doors 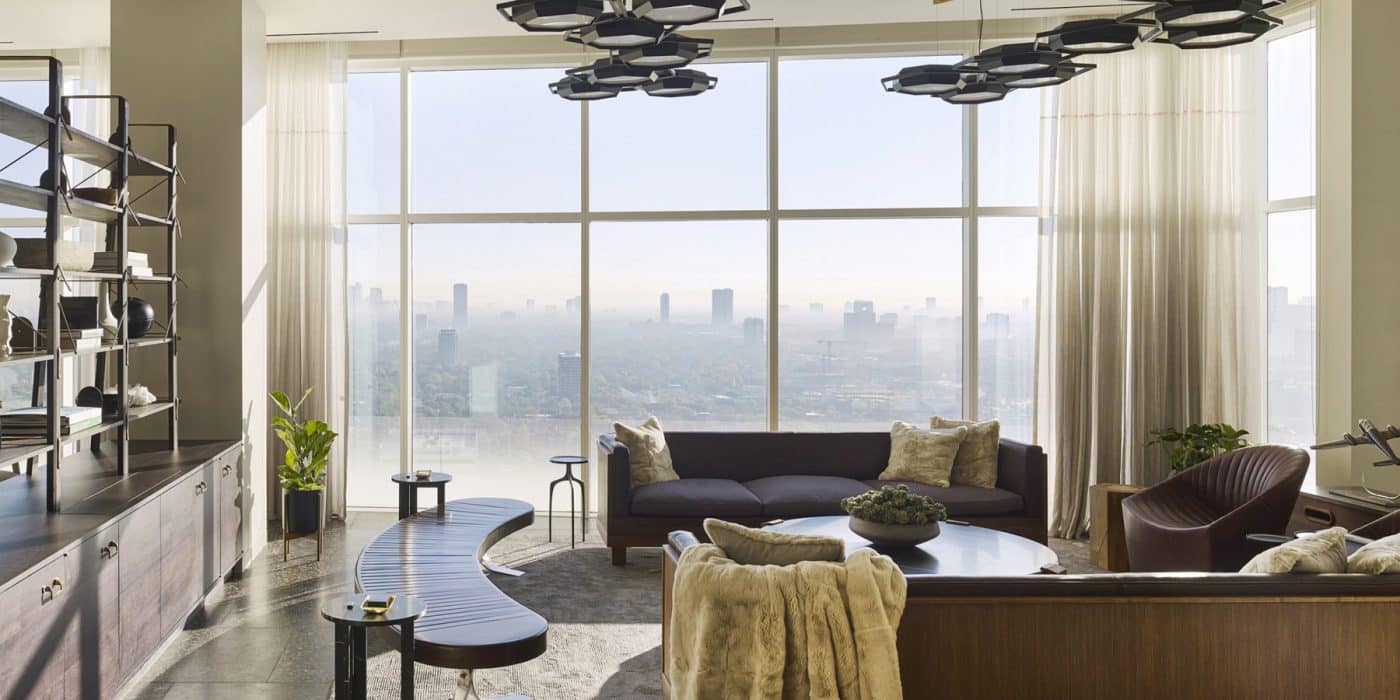 Designers Eric Clough and Eun Sun Chun, of the firm 212box, created a bespoke Texas aerie with the help of 50 talented artists and artisans — and 25 kinds of onyx and marble.

by Fred A. Bernstein | photos by Nick Rochowski

May 3, 2020Back when the economy was in full swing, designer Eric Clough and architect Eun Sun Chun landed the commission of a lifetime: creating a 6,000-square-foot penthouse pied-a-terre, with four terraces, in the River Oaks section of Houston. The apartment’s owners — introduced to Clough and Chun by the building’s developer, who had hired them to design its lobby — planned to use the place mostly for entertaining. Clough and Chun’s goal wasn’t to achieve a particular look but to support the artists and artisans who, under their direction, would together produce a bespoke environment. “If you’re looking for the definition of a perfect client, they were it,” says Chun, who met Clough at the Yale School of Architecture in the 1990s; they’ve been partners in their Manhattan-based studio, 212box, since 2004.

“If you have money, being a patron of the arts is a good way to spend it,” says Clough. The project gave the two partners the opportunity to collaborate with some 50 artists and artisans, both new collaborators and ones with whom they had worked with before, mainly on retail projects, including the 160 Christian Louboutin stores they designed from 2004 to 2019.

When 212box got the penthouse commission, the condo building was still under construction. That allowed Clough and Chun to replace the developer’s floor plan, which relied heavily on hallways, with a new layout that minimized circulation space. After that change, they began choosing statement-making materials, including 25 types of onyx and marble, most of it quarried in Italy. Next came the artworks, some free-standing, some built-in, the latter requiring a tremendous amount of coordination with the cabinetmakers and contractors. “There were so many times when we wondered, ‘Should we even bother?’ And we always decided, ‘Yes, let’s bother,’ ” recalls Chun.

“It’s everything we love all in one place,” says Clough. Below, he and Chun take us on a tour, describing how they used design not just to dazzle but to solve problems. 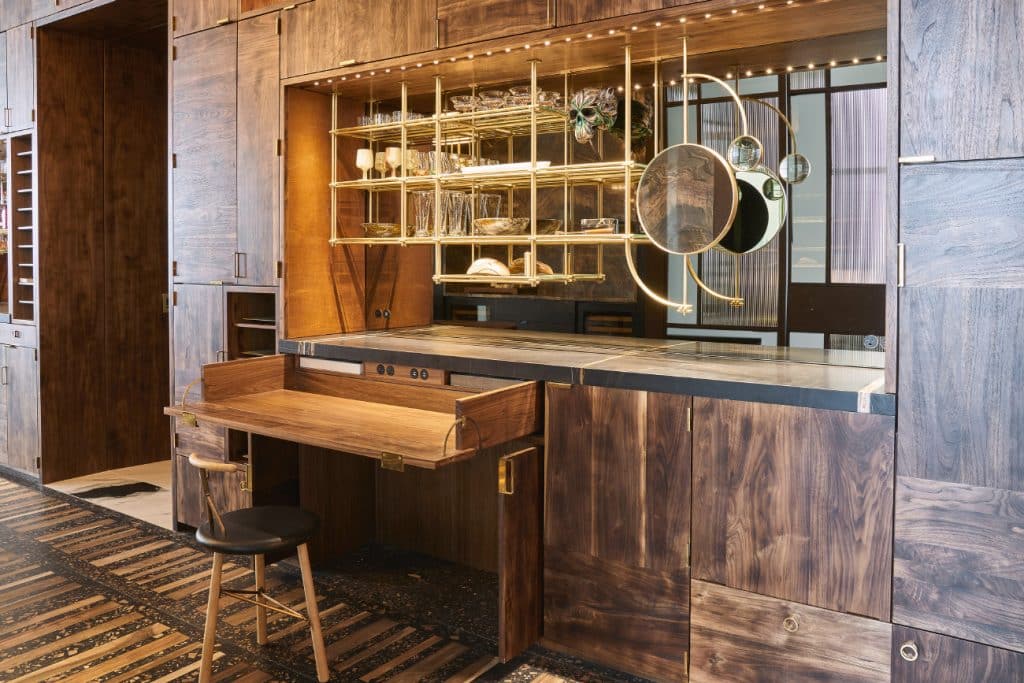 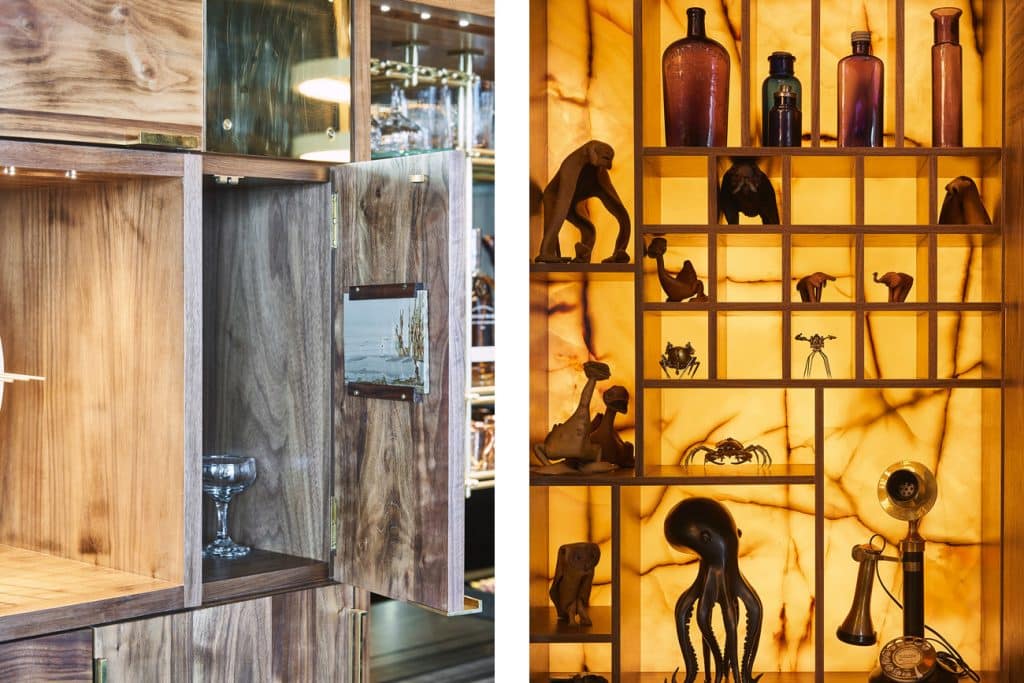 One side of the entry hall is devoted to a 25-foot-long curiosity cabinet made of walnut that was torched to char the sugars in the sap, thus accentuating the grain. At one end is an inconspicuous door to the guest bathroom; at the other are shelves set against a backlit onyx panel. Most of the items on the shelves, including the leather animals made by the German company Deru in the 1960s and sold by Mass Modern Design, were purchased on 1stdibs. The inside of one cabinet door holds a work by Claude Boullé, a French artist and mineralogist who slices stone to expose what look like landscape paintings. Brass fittings were made by E.R. Butler (as was much of the apartment’s custom hardware). The uppermost cabinets open at the touch of a button to reveal a sound system and laser lights that turn the room into a disco. The architects kept that feature secret until the clients arrived for the big “reveal,” which was “like a reality show,” Chun says.

The guest bathroom is behind a walnut door with an inset panel of frosted-and-bronzed glass. One wall is a mosaic of inlaid wood. The others are clad with a marble that, Clough says, suggests “an endless landscape of hills and valleys. 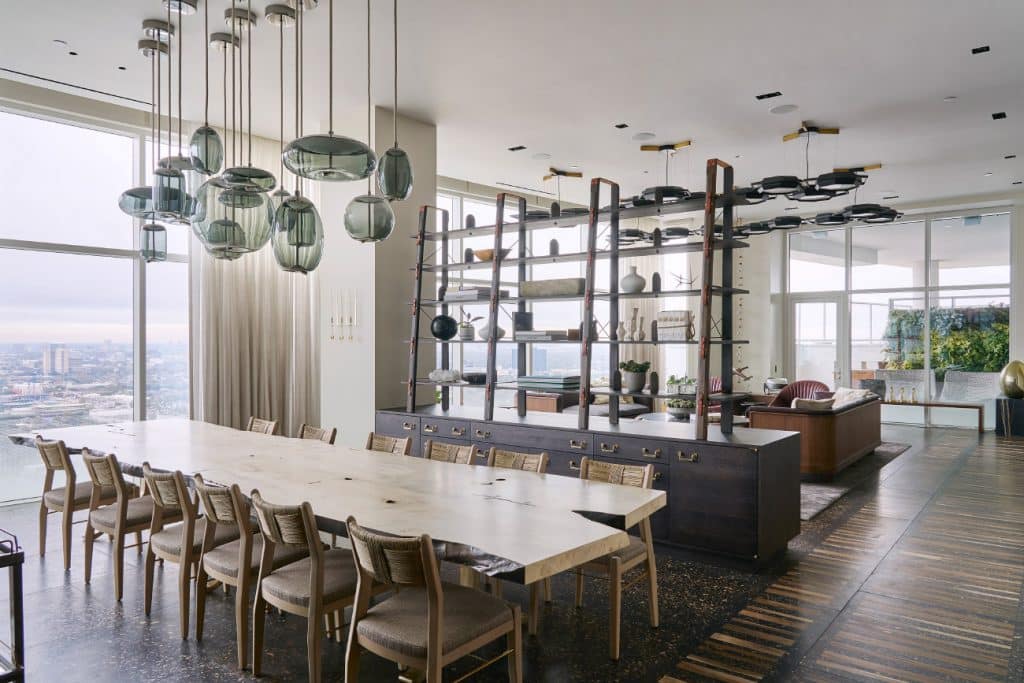 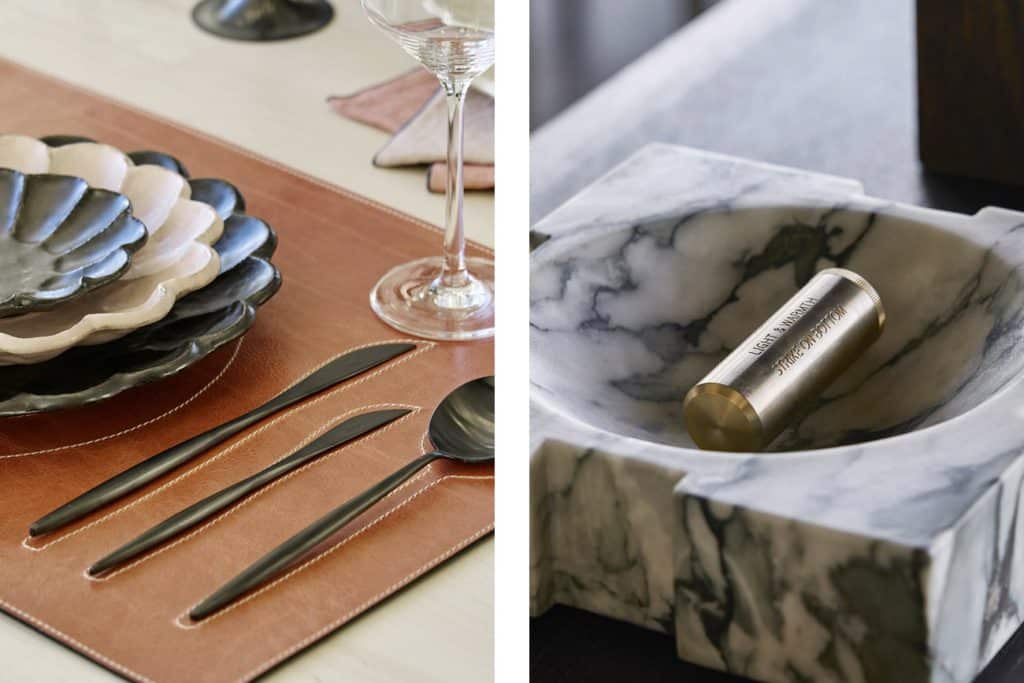 The length of the combined dining and living room made it somewhat unwieldy. Clough and Chun attacked that problem with design, placing a long credenza with open shelving above to separate the zones for eating and lounging. They gave each zone a center of gravity in the form of a substantial chandelier (though with none of the fussiness that word sometimes implies). Unifying the two areas is a terrazzo floor, produced in collaboration with the British company Foresso, embedded with dozens of walnut planks. These form a kind of spine or boardwalk and give order to the sprawling space.

A maple dining table by BDDW and light fixture by Dimore Studio anchor the dining area. The Bruno Moinard chairs combine white oak, brass, fabric and recycled paper (used like rattan for the chair backs). Tableware is mostly from Roman & Williams Guild; the placemats, inscribed with outlines showing the position of each item in a single setting, were designed by 212box and are available from the firm. Drawers in the credenza have sections customized to hold each type of dish and glass in a service for 20. Visual interest is provided by the shelves above. These are filled with items from 1stdibs, which was also the source of the wall-mounted Pierre Forssell candlesticks, made by Skultuna in Sweden in the 1950s and sold by Studio Schalling. The marble ashtray — by Greg Natale and part of the Flair Home Collection — contains a brass “bullet” from Fort Standard that holds matches.

The living room sofas and coffee table are from Roman & Williams Guild. Clough found the curved Brazilian bench at his favorite Parisian flea market, Paul Bert. Also from the market are two translucent golden eggs that serve as night-lights; Clough designed their pedestals from the same marble used in the coffee table. The chain light fixture over the model airplane is Viabizzuno’s Sempre Mia suspension lamp 3000; the apartment’s sole TV rises out of the base of the room divider.

The kitchen is a descendant of the developer’s original design, with the same footprint and same Eggersmann cabinets. But because it is completely open to the living and dining rooms, Clough and Chun wanted to make it a perfect vignette: a stage set framed by a proscenium. They removed part of the island to make the “set” nearly symmetrical and deployed striking materials, including high-contrast, white-veined Calacatta Black marble for the countertops. The most compelling feature may be the ceiling covered in four-inch wooden tiles. A collaboration between 212box and one of the oldest screen makers in Japan, these were inspired by the traditional kumiko woodworking technique. Their surface softens and diffuses light from the ceiling fixtures as well as the sculptural grid of tubes by Astropol. 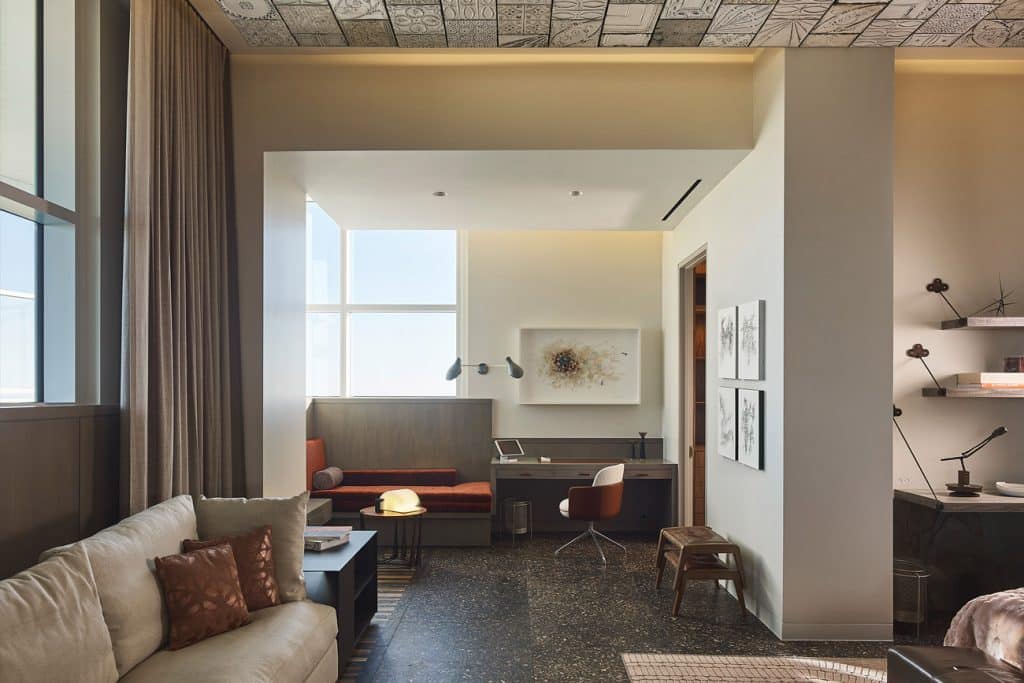 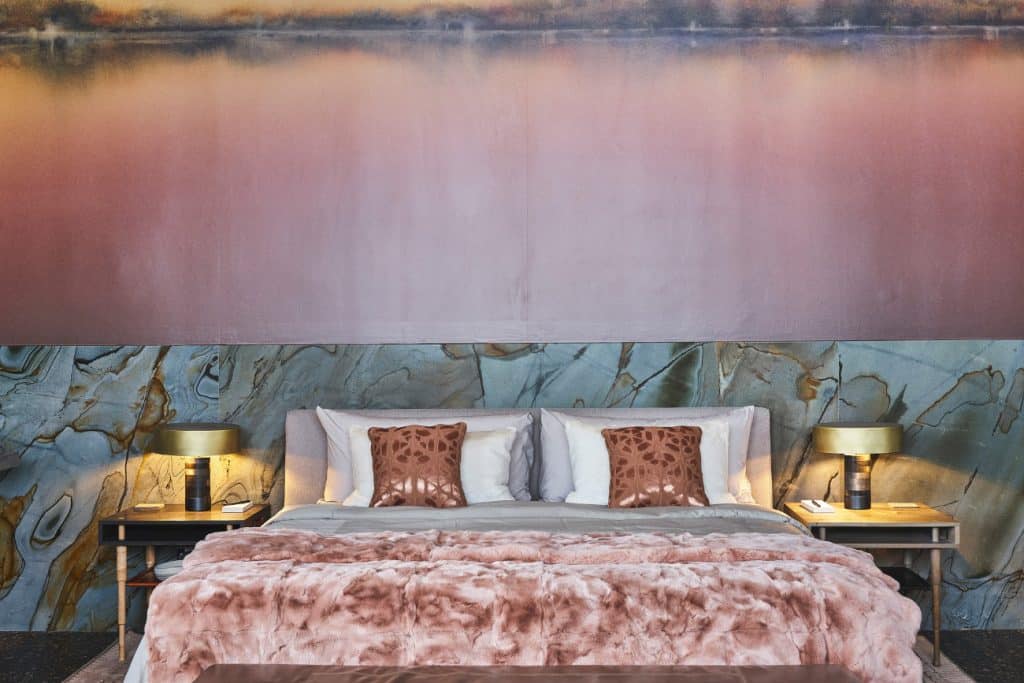 The pool right outside the guest suite is raised about four feet above floor level. This created an awkward blank interior wall beneath some of the windows. Clough and Chun turned this to their advantage by covering the wall in walnut, which is echoed by a marble panel of the same height behind the bed. Right above the marble is a sunset mural by Area Environments. On the night tables are two Gotham lamps from Wüd Furniture.

The designers had the pool retiled in dark blue. The stair up to the deck incorporates teak cabinetry for glassware, towels and portable lamps. The outdoor pillow was designed by Louie Rigano and Gil Muller for Shore. The apartment’s other outdoor spaces include a smoking terrace, a large terrace off the master bedroom and a small perch off the husband’s dressing room.

The short passageway to the master bedroom is lined with small paintings by Dutch artist Evert Rabbers. The larger painting is by California artist Patrick Dennis. The chandelier, its bulb set between a pair of lenses, is from Holly Hunt. 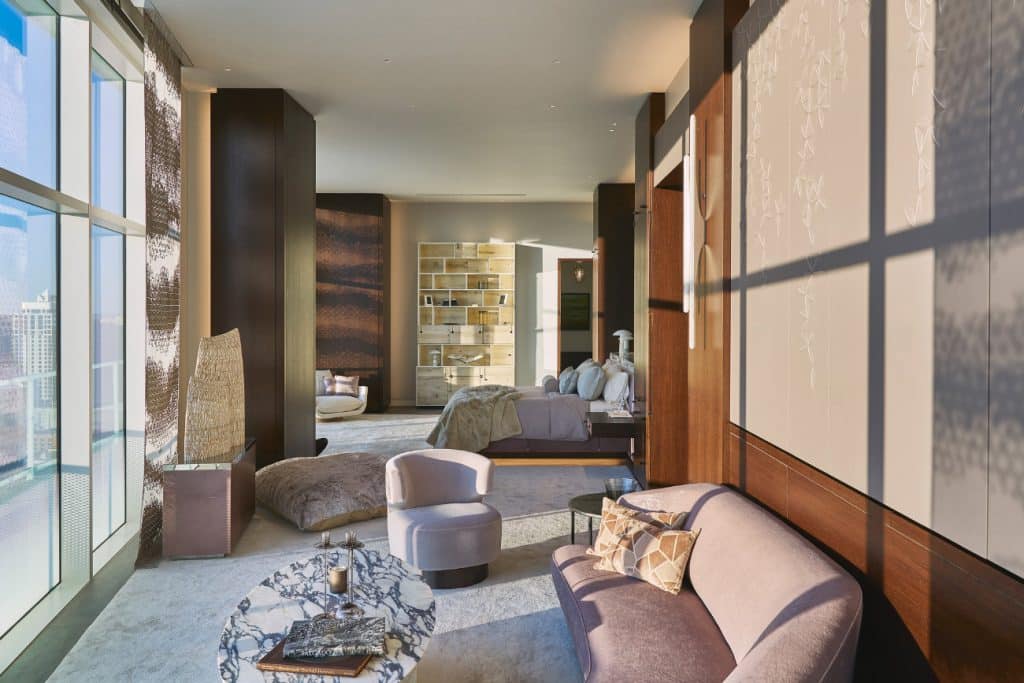 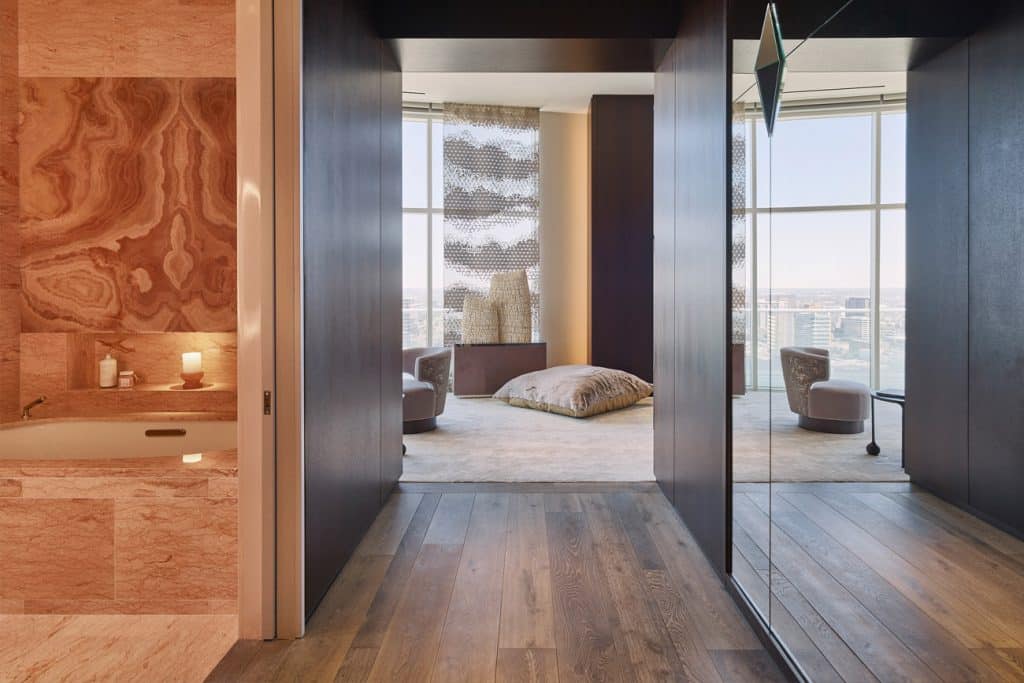 The master bedroom is a sprawling space interrupted by two thick columns. Clough and Chun addressed both issues at once: By covering the columns in dark-stained wenge, they accentuated the room’s height as a counterbalance to its horizontality. Then, they used the same wenge for additional vertical elements, including storage space, thereby turning lemons into lemonade. Above the pink sofa is an artwork by Helen Amy Murray, created by stitching and slicing leather to create 3-D patterns. The marble coffee table is by Clough and Chun.

Seen from the entrance to the master suite, a mirrored hallway passes the wife’s very pink bathroom. The “curtain” beyond is made of bits of laser-cut wood veneer arranged in cloud patterns by Elisa Strozyk. The wood sculptures in front of the curtain are by the French artist Thierry Martenon. 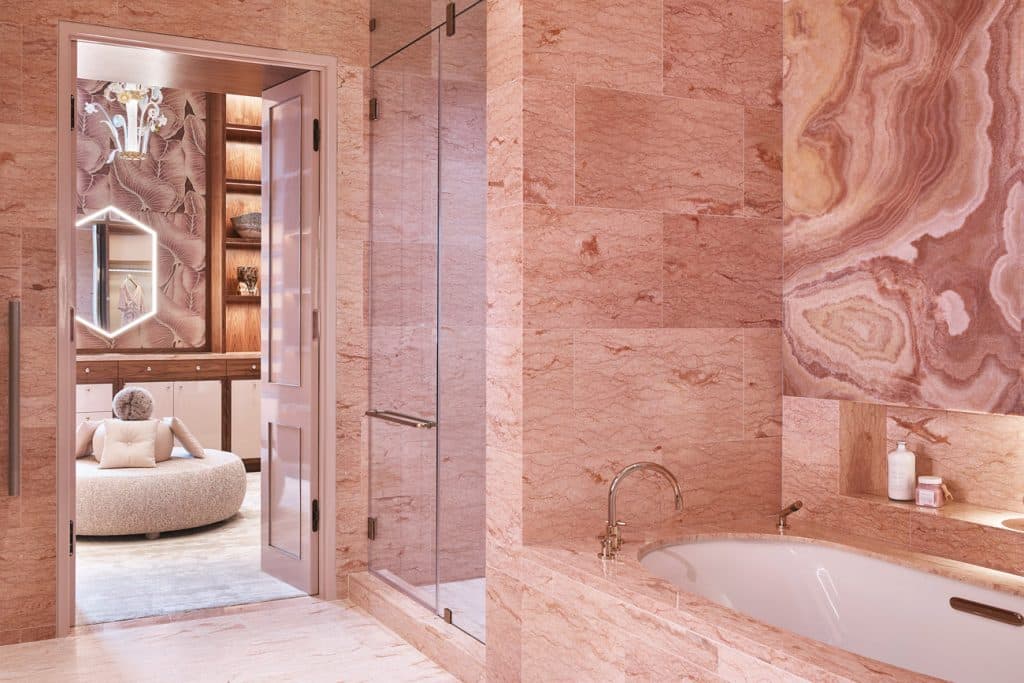 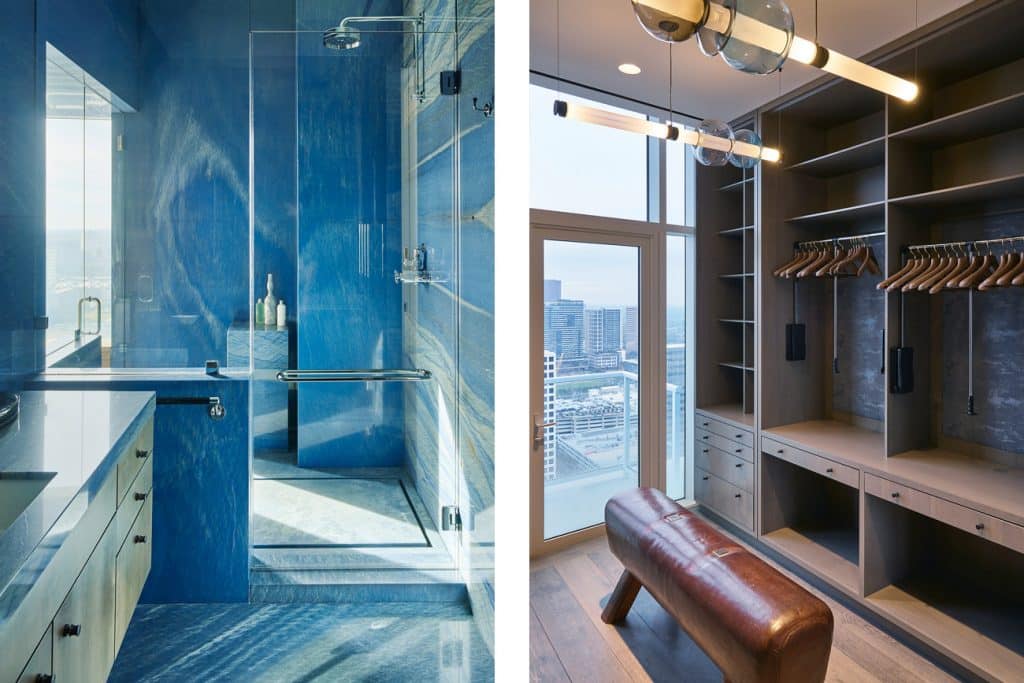 The wife had one request: She wanted a pink bathroom. Clough and Chun complied, mixing pink marble and pink onyx, the latter used four times: in the shower and over the tub, the vanity and the toilet. In the adjoining dressing room, a front-lit hexagonal mirror is mounted on a palm-leaf-patterned fabric. The hardware on the walnut cabinetry is all mother-of-pearl, and the insides of the drawers are marble.

In the husband’s dressing room, cabinets of gray-washed walnut surround an early-20th-century Czech pommel horse, sold by Country French Interiors, under light fixtures by Gabriel Scott. His bathroom is as blue as his wife’s is pink. The designers chose two types of Brazilian marble — one, Clough says, suggesting a landscape, the other reminiscent of a cloudless sky. A sauna looks out to Houston’s downtown gallery area.

The brass table is by Anasthasia Millot, and the bell-jar lamp is one of artist Thierry Toutin’s Germes de Lux, sold by Galerie Philia Furniture. On the wall above are casts of the hands of an orchestra conductor. A large mosaic-like artwork is an assemblage by Elisa Strozyk of laser-cut pieces of wood veneer that she pigmented and hung from fabric.

A 14-foot-long desk and leather chairs from a Paris flea market provide a place to read or work. In case there’s an extra guest, a Murphy bed is at hand, concealed by a wall of fluted walnut with a surround of pale blue marble. The wall separating the room from the apartment’s more public spaces is composed of three kinds of glass — fluted, frosted and bronzed. 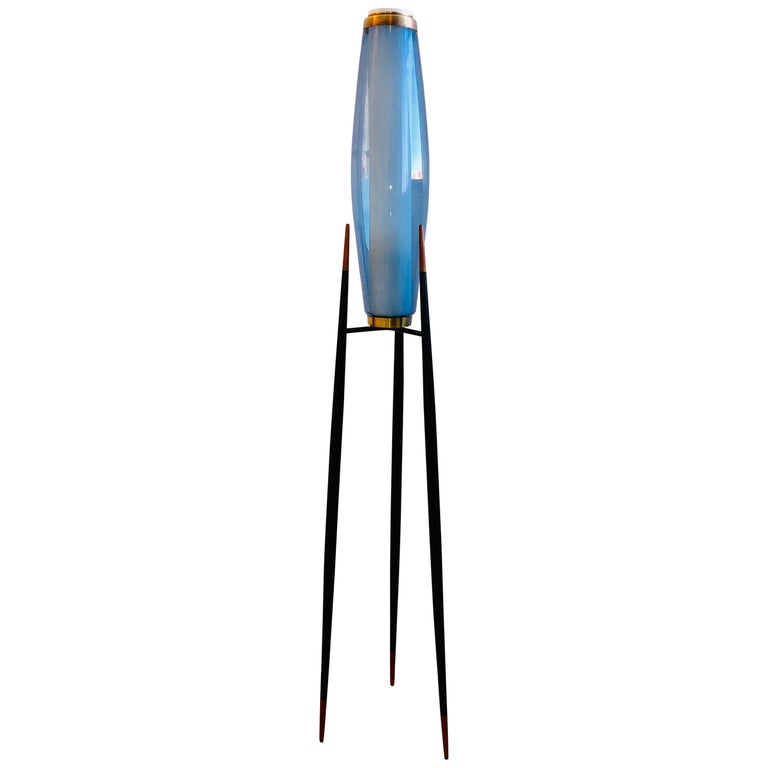 “Something vertical and kinetic always helps change the energy to a room,” says Chun. “We just love the angles on this fixture too.” 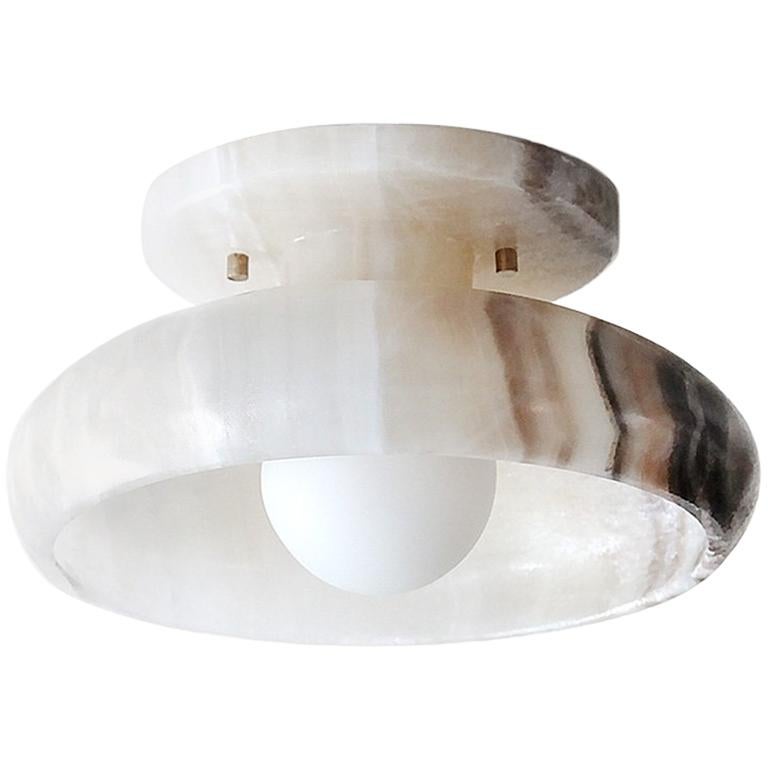 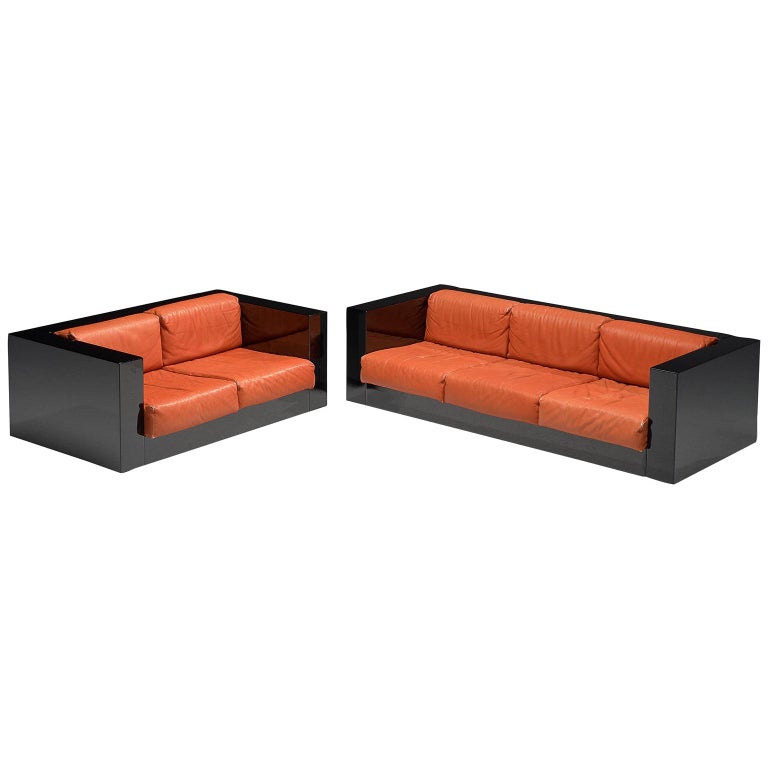 “The color contrast is perfect in this vintage Massimo set,” says Chun. 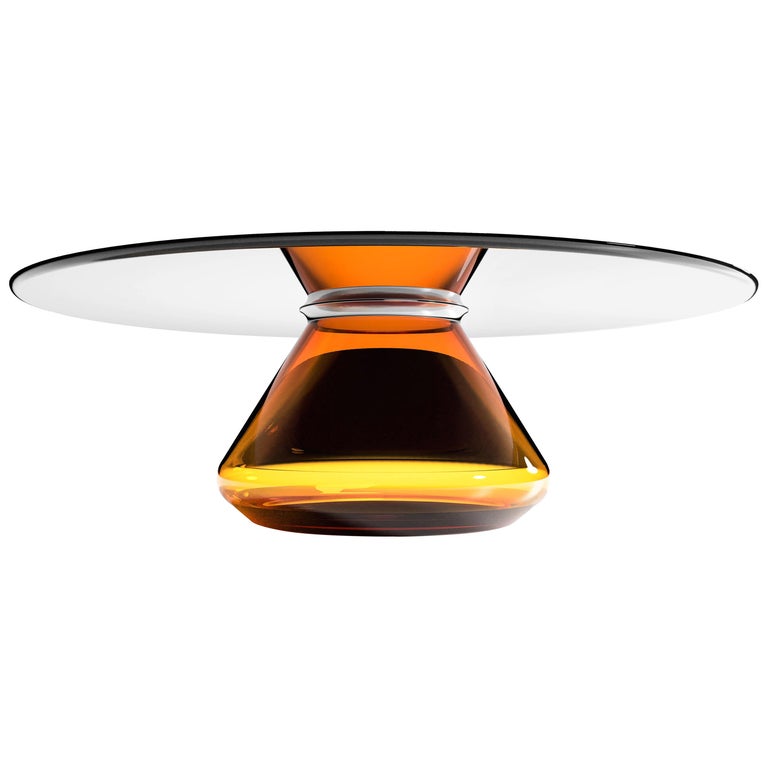 “We’re in love with this amber glass table,” says Clough. “Can’t wait to use it in our next project.” 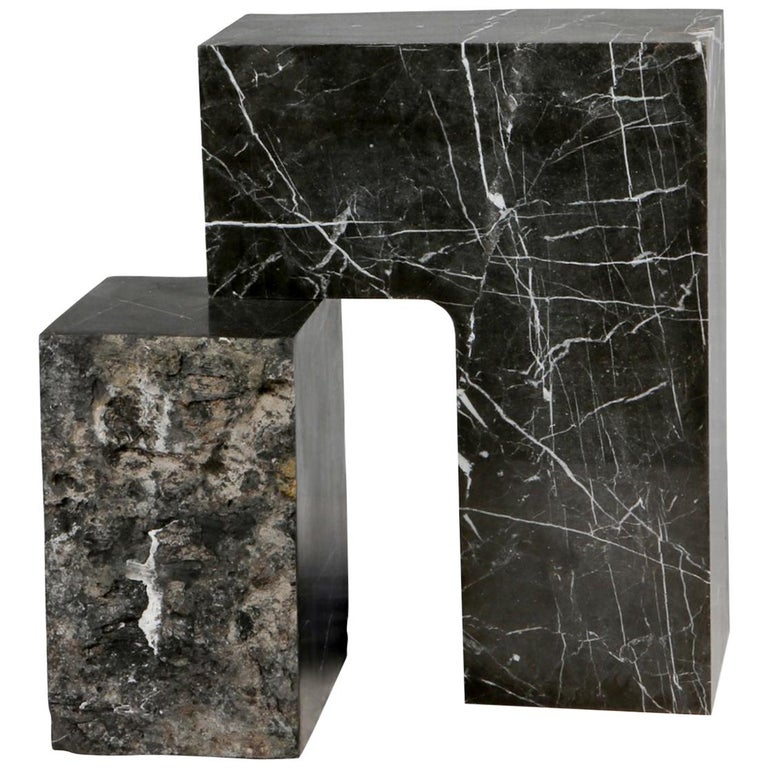 Says Chun, “You can just feel the weight of this perfect piece.” 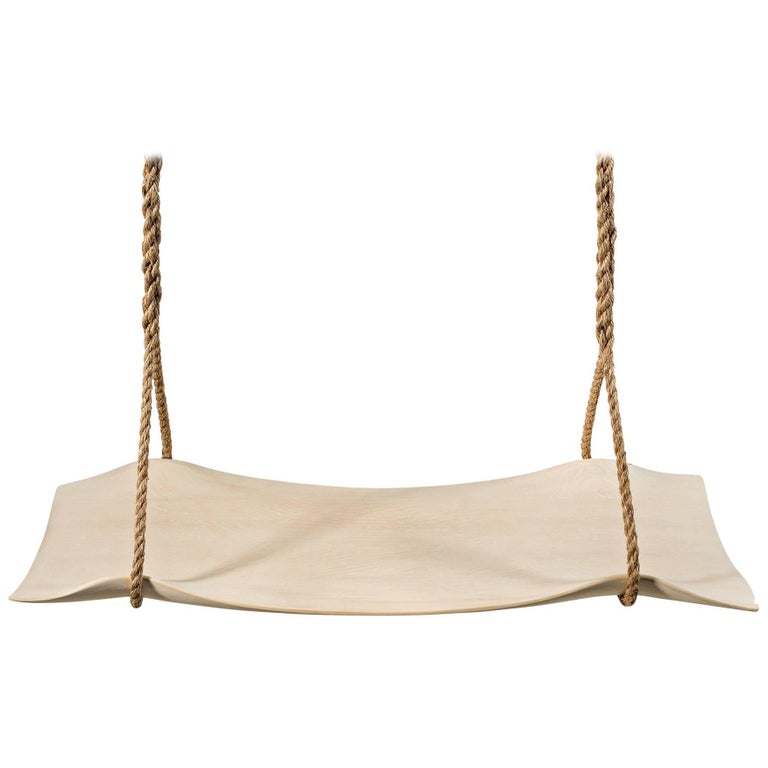 “We always insert something playful and unexpected,” says Clough. “This piece is perfect for that, and Kurtz is just an amazing artist.” 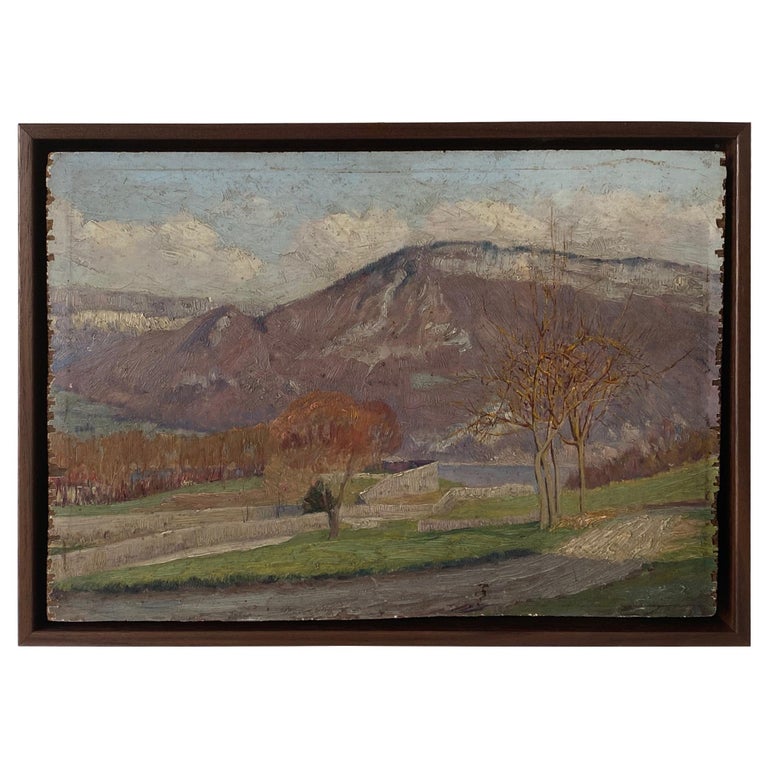 “Landscape oil paintings have a nice way of rooting memories and vignettes onto a wall,” says Chun. “Small poems of the past open up stories for us.” 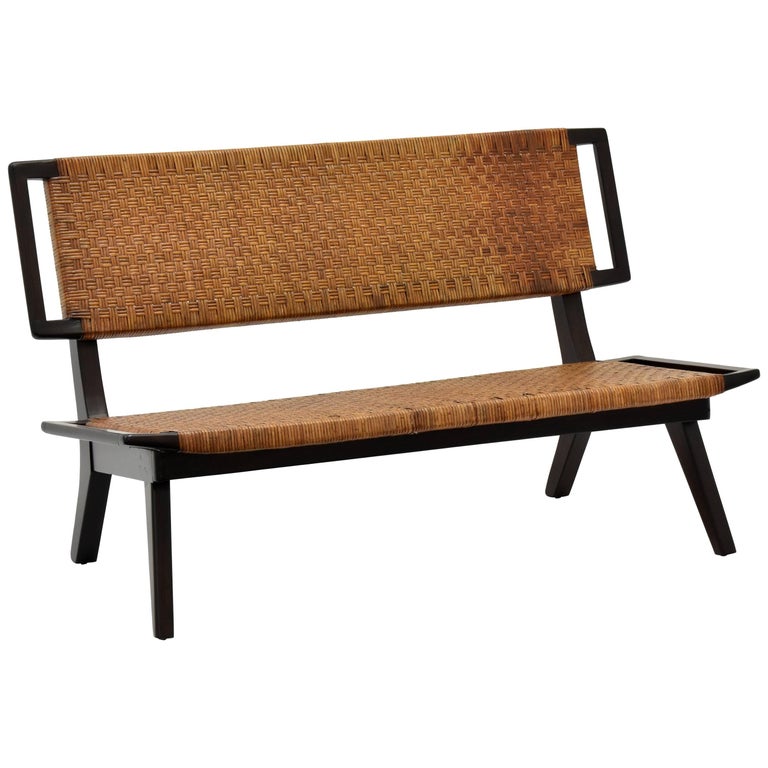 “Well-cared-for antiques are key to our projects, and the woven details on this rattan bring a great texture to any room,” says Clough. 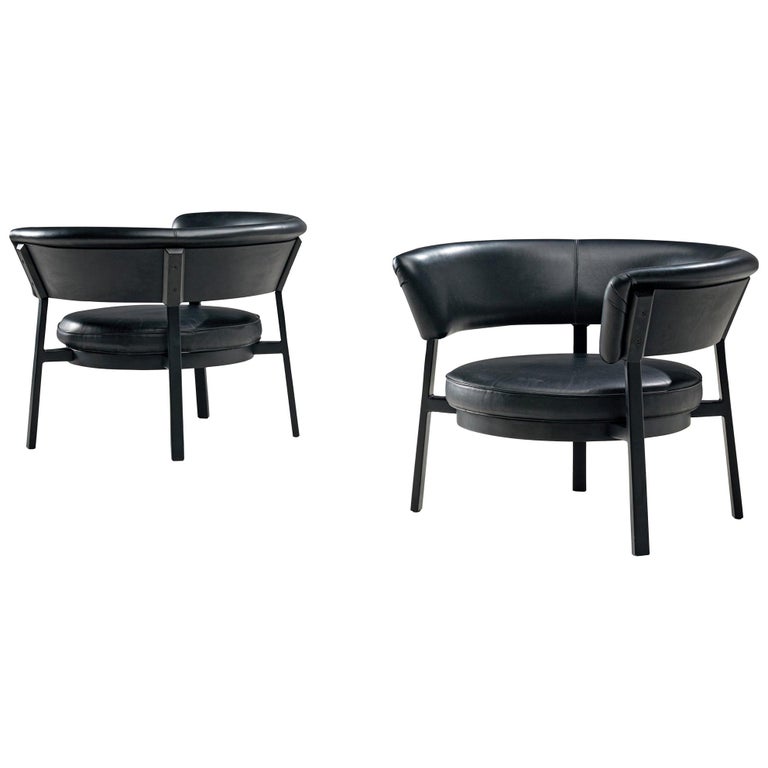 “We try to think of furniture encompassing volumes of space when not being used,” says Chun. “These chairs are perfect spinning geometries to us.”