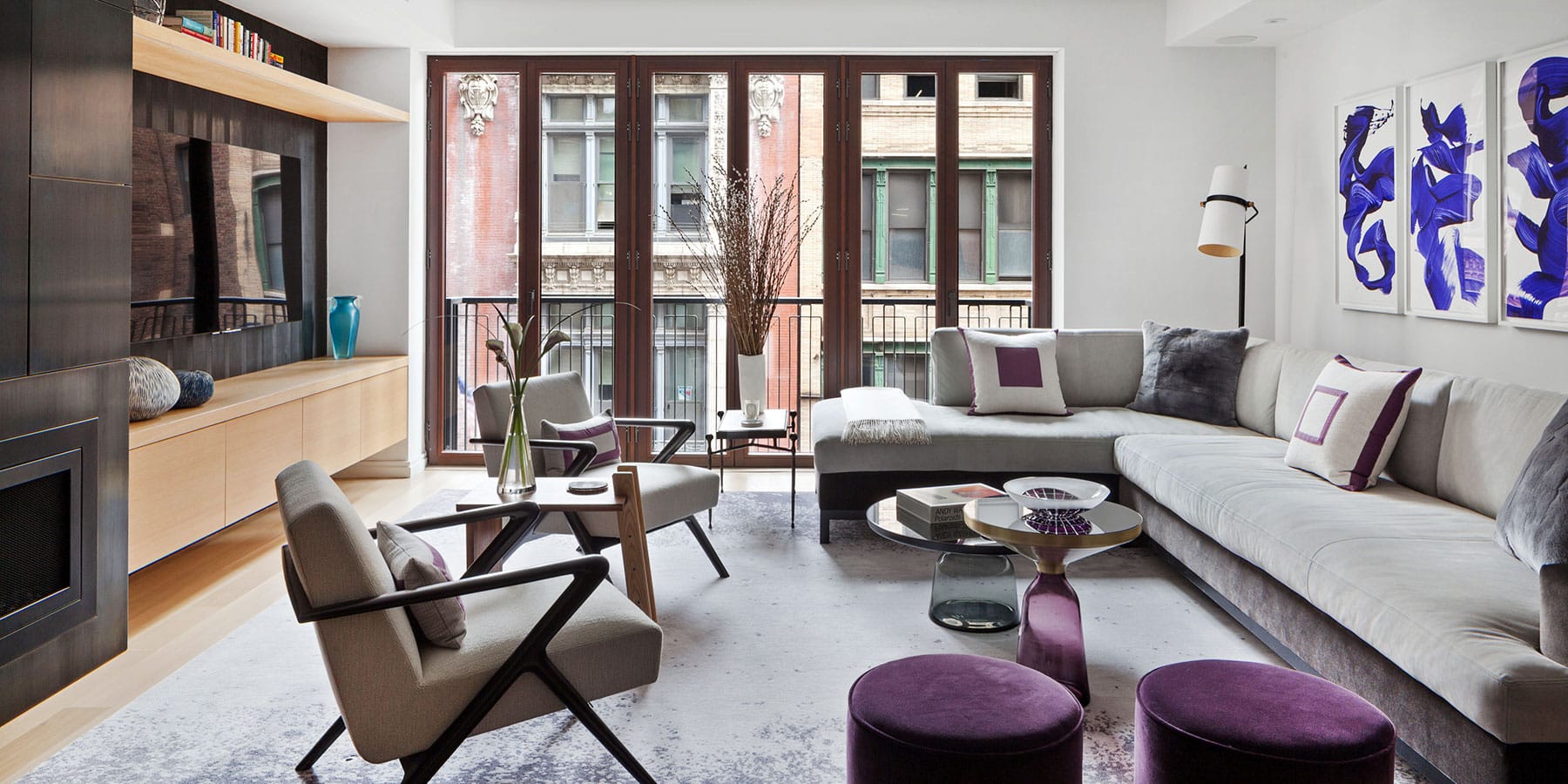 This Manhattan-based interior designer may have just opened up shop, but he's far from a novice. 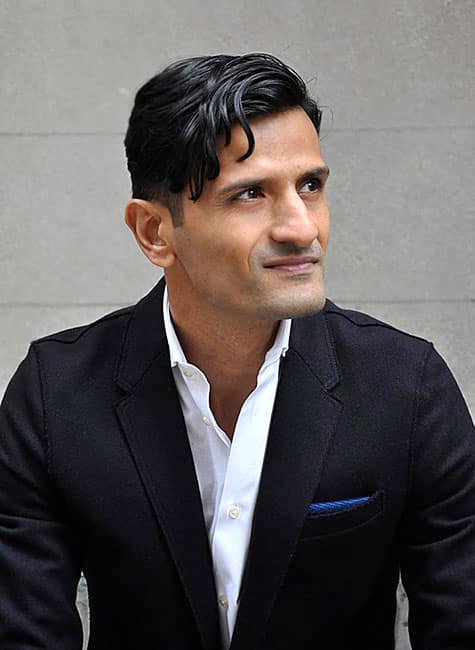 After nearly 15 years working alongside his mentor, interior designer Robert Couturier, Aamir Khandwala hung out his shingle in 2015 (portrait by Atif Toor). Top: For his most recent project, an Upper West Side condo, Khandwala custom designed a sectional sofa with fabric by Schumacher (photo by Mekko Harjo).

The rooms of interior designer Aamir Khandwala are strong and graphic without being overly so. The New York City–based Khandwala is a protégé, though not a clone, of the architect and designer Robert Couturier, who is known for creating interiors of extravagant luxury, boldness and drama in palatial homes belonging to such clients as fashion icon Amy Fine Collins, writer Andrew Solomon and the late British financier Sir James Goldsmith. Khandwala spent 14 years working with Couturier, eventually becoming his head of decoration. With his mentor’s blessing, he opened his own firm in 2015. The difference between the two men? “Robert’s style is often about more and more,” Khandwala says. “Mine is highly edited — I like a little less.”

Khandwala was born in Karachi, Pakistan, to a family who’d launched a successful travel agency in 1935 and fully expected him to work there. He declined. “I always wanted to be an interior designer,” he says simply. In 1991, his parents sent him to New York, and he soon enrolled at the Fashion Institute of Technology. Following graduation, he received a second education at Couturier’s office. “I was open to learning, and I got an overall view of the world,” says Khandwala, who worked on projects in Paris and London for the French-born designer — and handled others in Salzburg, Caracas and Jerusalem from his Manhattan base.

Although color is in his DNA, he says, Couturier taught him balance, the right way to approach a neutral palette and the ins and outs of mixing styles and cultures. From that foundation, Khandwala has developed a signature approach, melding vintage furniture with custom-designed sculptural pieces and highlighting it all with vibrant wallpaper and lighting. The understated drama he summons up in the process is manifest in the Union Square condominium of Maneesh Goyal, who heads Pineapple Co., a New York–based marketing, branding and events company. The loft serves as both Goyal’s home and a place where he regularly hosts private parties for up to 200 people. Khandwala first designed the space in 2007, while on staff with Couturier, and tweaked it again in 2016. He describes the decor as “Bollywood meets the 1970s.” In the open dining/living area — a long sweep of a room that functions as a party space — the rear wall by the dining table has transitioned from fiery red to creamy white lacquer, reflecting Goyal’s desire to tone down some of the original colors. A low-slung granite coffee table framed in stainless steel is paired with Holly Hunt’s metal and leather stools and equally crisp vintage Florence Knoll marble-topped side tables and a stately mirrored cabinet by Henredon. To soften the composition and add color, Khandwala placed Judy Ross–embroidered pillows on the casual sectional sofa, which he flanked with custom-made rounded tub chairs in the style of Milo Baughman that he upholstered in Goyal’s mother’s silk saris, one blue and gold, the other a silvery gray. The silk is backed by polyester knit for extra strength. “Nothing can get ruined,” the designer explains. “The furniture is not precious.” 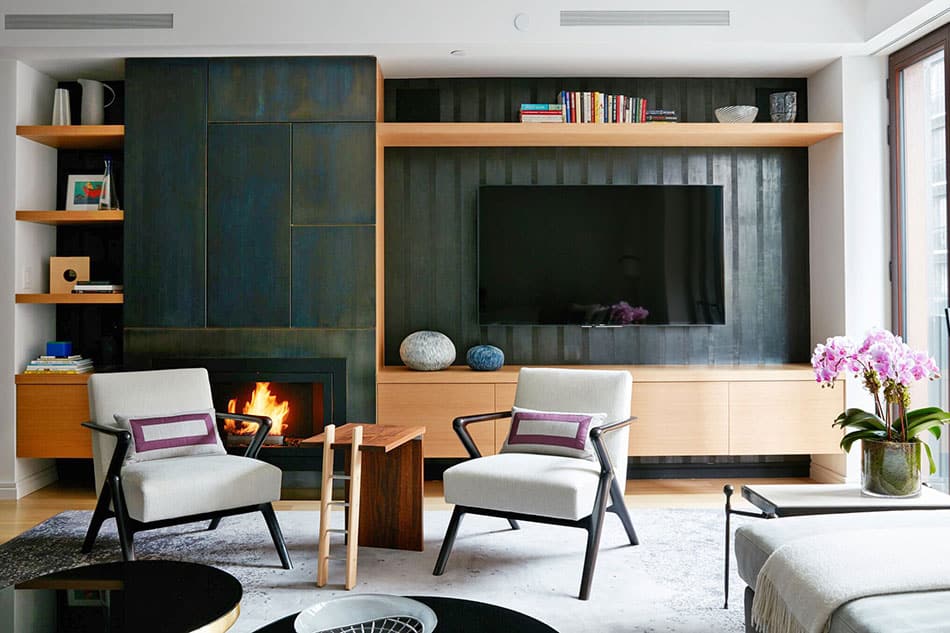 Custom millwork and surfaces of blackened brass, oak and custom plaster create a statement wall in the living room of the Upper West Side condominium. The Capri lounge chairs are from Holly Hunt. Photo courtesy of AKID 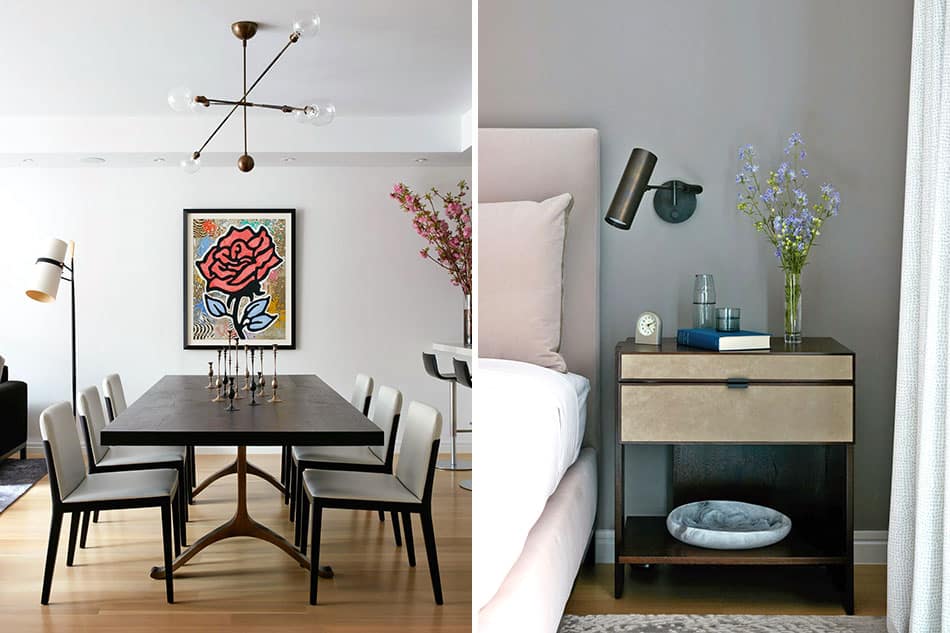 Left: The condo’s dining room features a splashy painting by Donald Baechler and a bronze and black calfskin leather ceiling light from Apparatus. Right: The walnut-and-suede nightstand in the master bedroom was custom created by New Day Woodwork. Both photos courtesy of AKID 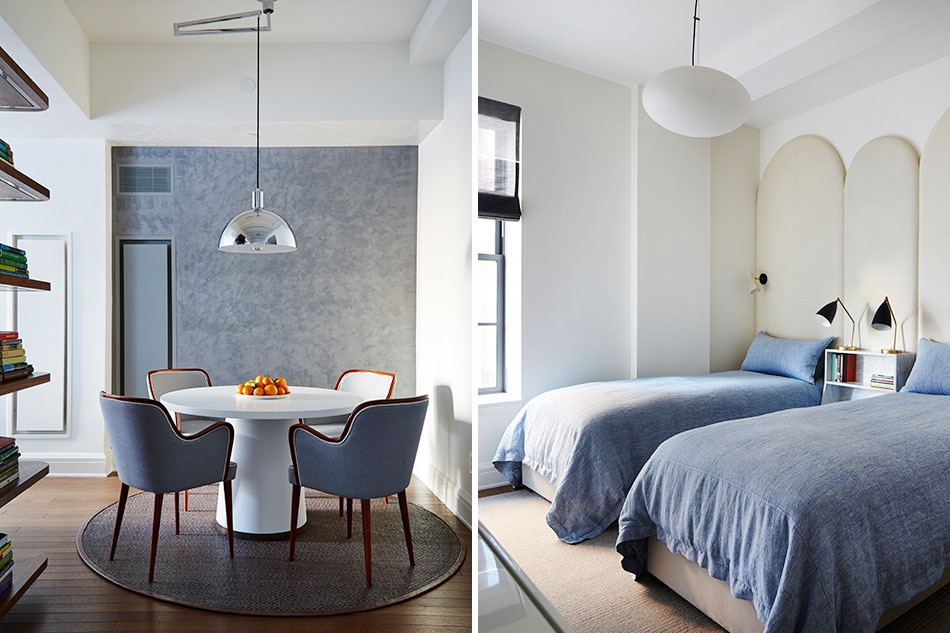 Left: In a West Village apartment, a table of white Corian custom designed by Khandwala sits below a 1960s Franco Albini swing-arm light from l’Art de Vivre . Right: More ’60s lighting, in the form a Stilnovo pendant from Bernd Goeckler, is found in the childrens’ bedroom. Both photos courtesy of AKID 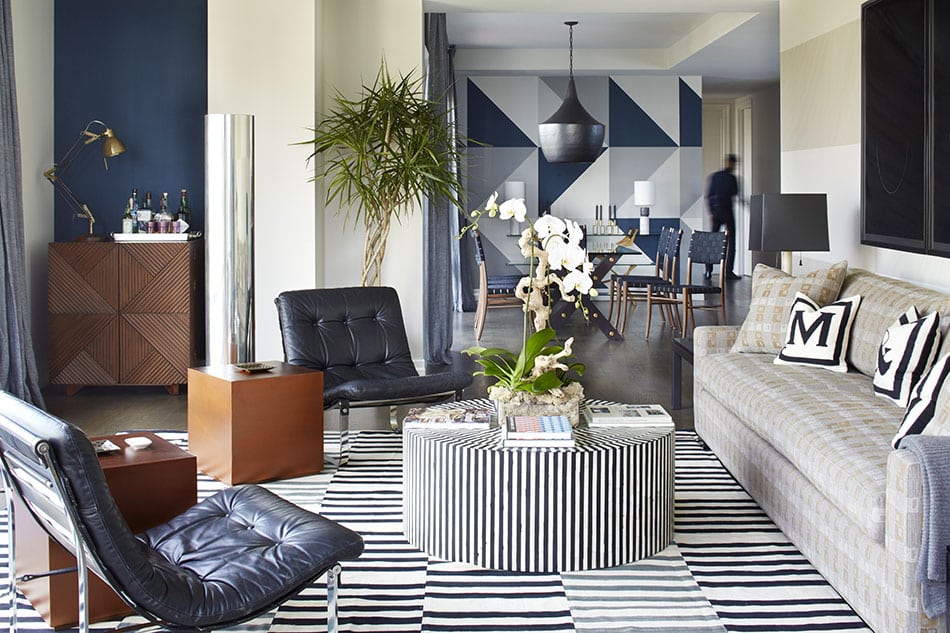 Khandwala achieves graphic impact in this Atlanta pied-à-terre with a custom geometric paint job, a vintage black-and-white kilim rug and a round Op art–inspired bone and wood coffee table. Photo by Mali Azima 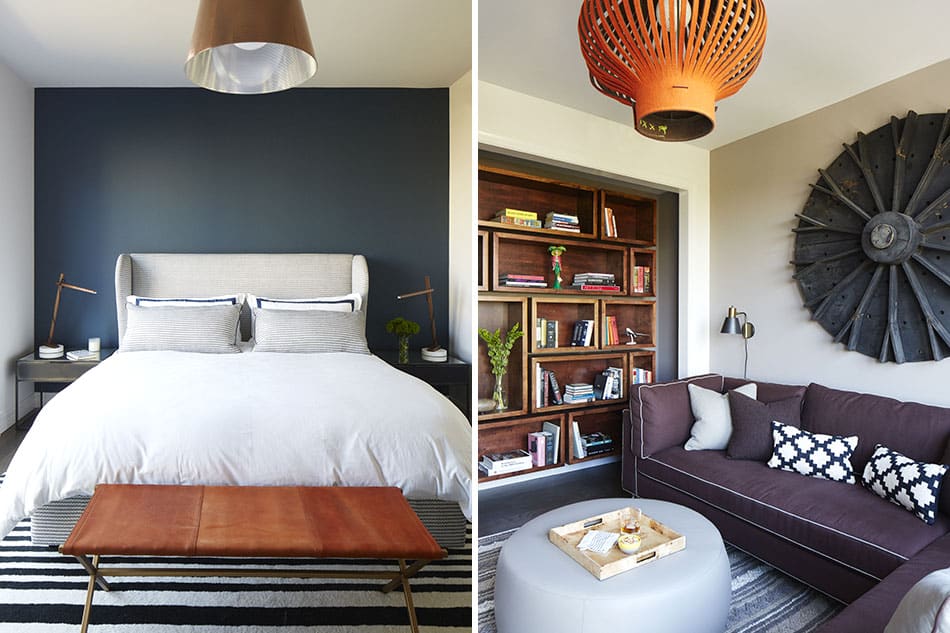 Left: A copper KTribe S light fixture by Philippe Starck for Flos draws the eye upward in the Atlanta master bedroom. Right: The den of the same home features a collection of unique pieces discovered in Atlanta antique shops, including an oversize circular 1920s metal foundry mold. Both photos by Mali Azima 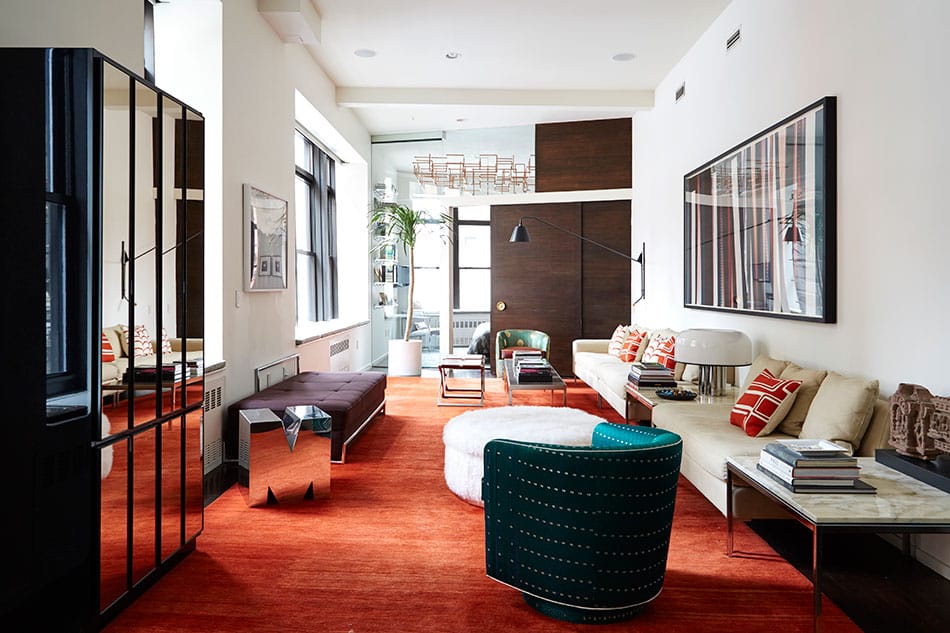 The club chairs in this Union Square home received a bold, and highly personalized, upholstery treatment using saris that once belonged to the homeowner’s mother. Photo courtesy of AKID 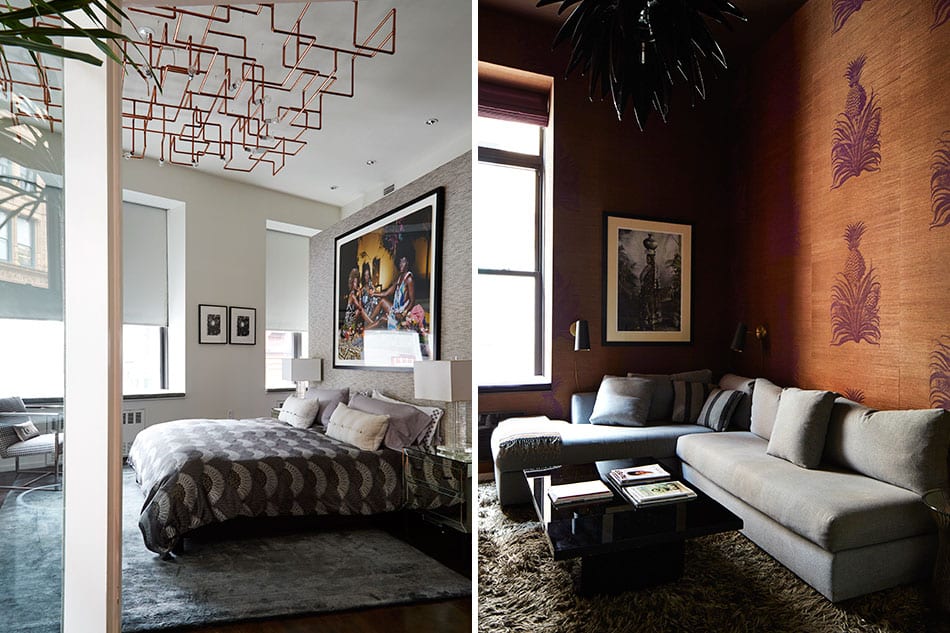 Left: A matrix-like copper overhead light by DDC and a photograph by Mickalene Thomas adorn the Union Square master bedroom. Right: An artichoke pendant lamp by Louis Poulsen echoes the prickly motif of the pineapple wallpaper, custom made by Studio Printworks. Both photos courtesy of AKID 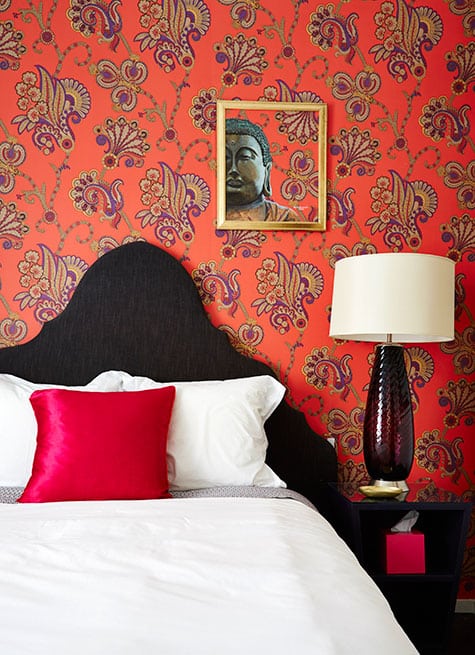 The Buddha adorning the wall paper in this Union Square guest bedroom was hand-painted by the artist Ruth Alvarado. Photo courtesy of AKID

The gray-toned bedroom has columnar crystal lamps on mirrored bedside tables from Mecox Gardens. Khandwala designed a pale gray wall covering, using a mohair, wool and linen blend, to envelop the formerly purple space. “Maneesh was tired of both the red wall in the living room and the purple wall in the bedroom,” the designer says.

Khandwala uses wallpaper fearlessly. In the study, he enlarged a dark brown and sepia image of a pineapple to three times its original size and printed it on a caramel-colored raffia. The guest bedroom is papered in an oversize, stylized Indian floral design on a watermelon-red ground with an image of Buddha, framed in gold gilt, painted on it. The scheme was created and carried out by Ruth Alvarado, who is an artist as well as Goyal’s housekeeper.

The owner of an Upper West Side condominium, a retired investment executive, favored a cocoonlike decor of platinum grays and charcoal, all softly textured and enlivened with pops of color from art. “I kept the furnishings light, but not beige and boring,” Khandwala says. He partnered an ebonized walnut dining table from BDDW with wood-framed Poltrona Frau chairs and arranged a collection of Ted Muehling’s oxidized-bronze Biedermeier candlesticks beneath a bronze and black-calfskin chandelier from Apparatus. The room’s colorful focal point is a silk-screen of a rose by Donald Baechler.

In the living area, Khandwala designed an L-shaped sofa and pillows banded in eggplant, the client’s favorite color. Flanking the sofa is a pair of Yasmin floor lamps from Arteriors, each with a black iron rod and a white linen shade. Karen Simon, a friend of the owner’s, made a walnut and oak table with a ladder front. The wall above the fireplace is blackened brass, and the wall behind the television is hand-applied plaster. 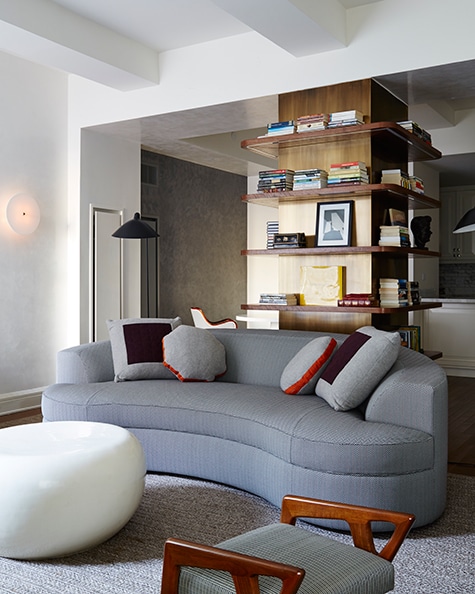 Accenting the custom-designed curved sofa in this West Village apartment are a walnut stool by Giò Ponti from Bernd Goeckler and a Qi seat by Robert Kuo. Photo courtesy of AKID

In the bedroom, says Khandwala, “she wanted peaceful, serene, soft, simple.” He obliged with a headboard upholstered in blush-colored velvet to complement pale gray walls; the custom-designed nightstands are walnut with suede fronts. Across from the bed is a tour de force console by Egg Collective, also in walnut, with bronze pulls and a midnight-blue leather face. Luxury is in the details.

This is true as well in the West Village condominium Khandwala designed for a family of four. The walls and ceiling of the dining area are finished in silky Venetian plaster, which, the designer believes, “brings movement to the space.” A custom-designed round dining table in snowy Corian with a pedestal base edged in bronze is surrounded by 1950s Osvaldo Borsani mahogany armchairs from L’Art de Vivre, and a vintage Franco Albini lamp from the 1960s with a movable arm, providing flexibility, hangs from the ceiling. In the living area, Khandwala also designed the sofa, inspired by Jean Royère’s iconic Polar Bear series, and a walnut and bronze bookcase that wraps around — and disguises — a structural column and sets off the dining area from the living area.

For an Atlanta condo, Khandwala scoured vintage shops for overlooked treasures and hired local craftsmen to execute custom designs. It was drama on the cheap, with a strong masculine aesthetic, for a client who is an executive in the airline industry. He designed a punchy geometric mural in black, white and gray and had it hand-painted on the living/dining area wall. “It brings oomph to the room,” he says. A round wood and bone coffee table from Anthropologie and a vintage Iranian Mazandaran kilim, stitched together from black and white striped panels, combine with vintage black leather easy chairs to complete the picture.

No matter the city or country, Khandwala knows how to express himself in a panoply of styles and situations, whether working with dream clients or more demanding ones. To maintain serenity, he meditates. Once in the morning. Once at night. Seven days a week, by design. 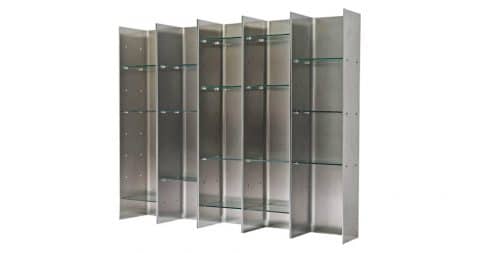 “Love the architectural and industrial quality of this bookcase. Would be fun to use in a dining area with books and objects.” 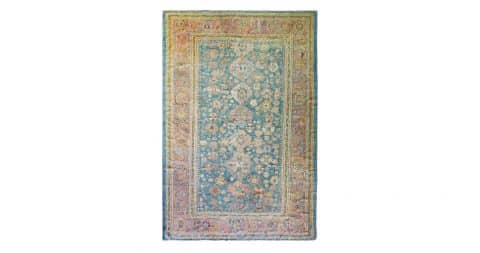 “I’ve always loved Oushak rugs. The color combination in this one is sublime.” 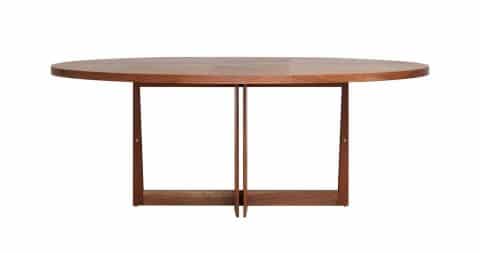 “This table is sensuous and would bring warmth to any dining room. Love the combination of this table with the Oushak and the Zimmerman shelving unit.” 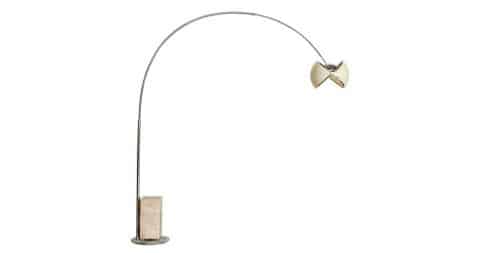 “This classic lamp is sculptural and would bring a wow factor to a space.” 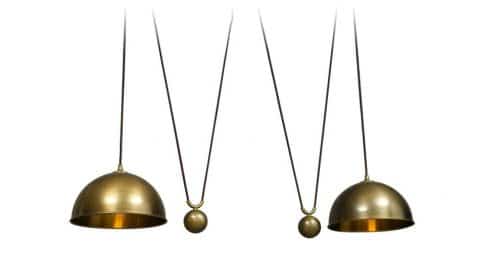 “This pendant goes well with the Swan dining table — I love its authentic and minimalist nature.” 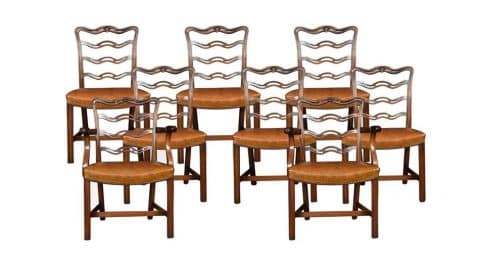 “I like the ribbon-like quality on the backs of these Chippendale dining chairs, and I think they would complement the Swan table nicely. I would cover the seats in a white cowhide.” 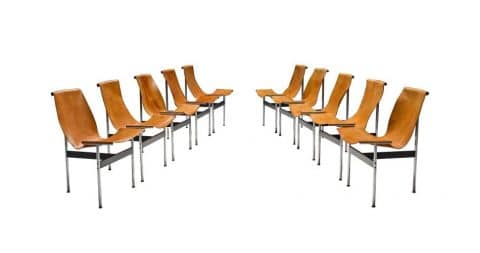 “I’ve always been a fan of these elegant T chairs. This set would be another option to go with the Swan table.” 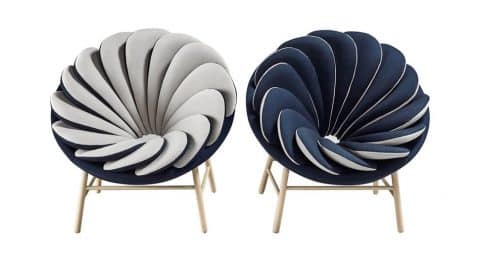 “These are showstoppers — fun and bold for an entryway or even in the corners of a dining room!” 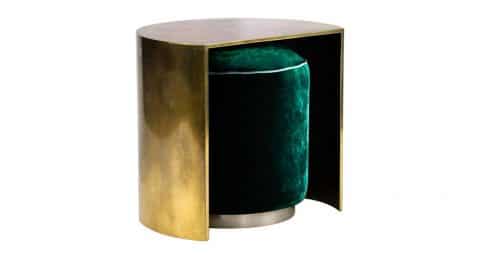 “Very clever! Great for small New York City apartments, where you get multiple uses from one item”