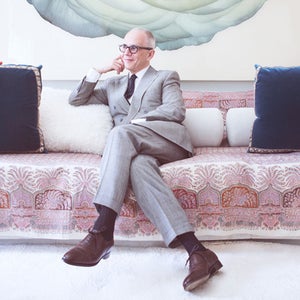 With a deep understanding of the classical, internationally acclaimed interior designer Robert Couturier brings his inimitable style and wit to each and every project. Décor, Couturier believes above all else, must be appropriate to the architecture, to the clients and to the setting. The last thing he sees his interiors as are stage sets–rather, they are spaces for living people to move through and function in and in fact, they work superbly. Above all, Robert Couturier can be said to lend a sense of connoisseurship, imagination, and even experimentation to the traditional design landscape. As he likes to say himself, recalling the rich interiors in which he spent his childhood and youth, “It is to both grander and greater ends that one invents when one can start with one’s own past.”

A graduate of the Ecole Camondo in Paris with a degree in interior architecture and design, Robert relocated from France to New York City in 1978. Nine years later, in 1987, Robert opened his own company when the billionaire financier Sir James Goldsmith entrusted 32-year-old Couturier with what would amount to the single greatest private commission of modern times: the re-conception, execution, and continuous embellishment–down to the last gilded detail–of Goldsmith’s 20,000-acre kingdom on the Pacific Coast of Mexico.