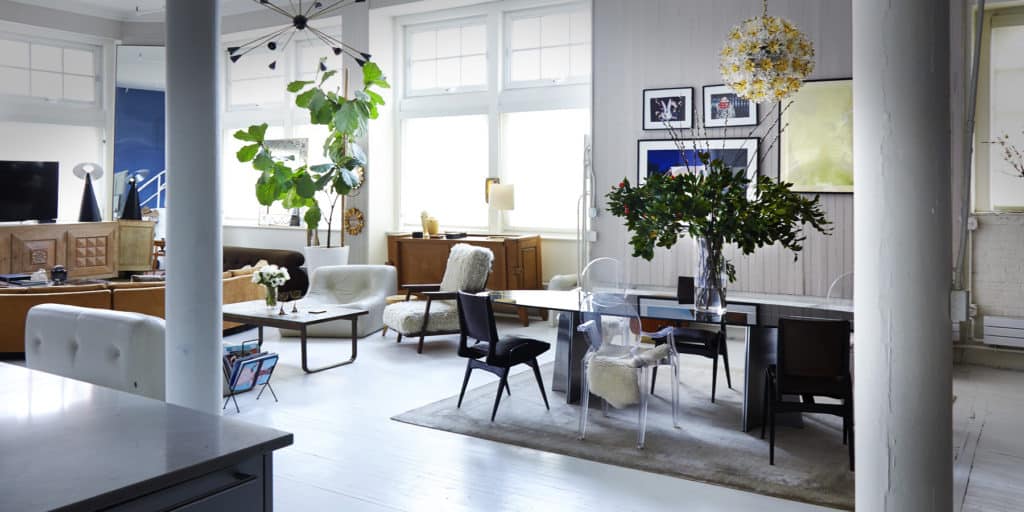 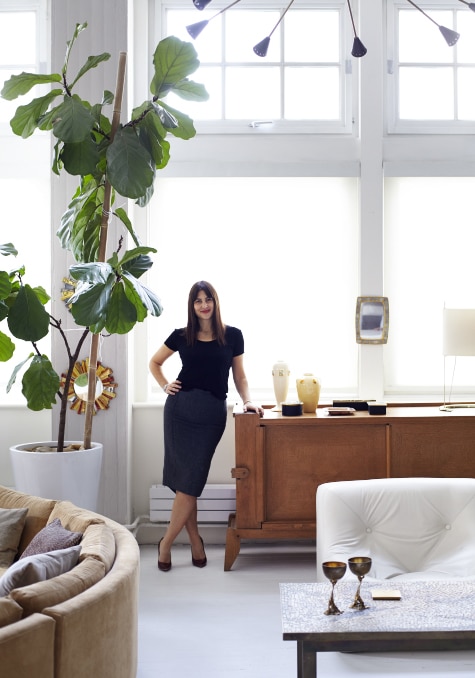 May 8, 2017Alana Varel and her husband, James Grant, built their successful business, the Starworks Group, on connecting fashion brands and celebrities. Now she has combined her entrepreneurial talents and passion for furniture in This Place, a shopping “experience” held in her home, which has earned her clients like Gucci and The Webster. Top: Varel’s Tribeca loft doubles as a showroom for This Place pieces, including ones by Milo Baughman, Luigi Saccardo and Guillerme et Chambron.

Alana Varel built a thriving business by helping fashion designers get their clothes on the right celebrities — in ads or simply paparazzi shots — thereby transmitting their message to the public. For her latest venture, Varel is exercising her own tastemaking prowess.

Her sideline gig, called This Place, sells vintage furniture, much of it mid-century European. “I’ve always been a furniture aficionado,” Varel says, sitting on a French sofa in the chic Tribeca loft she shares with her husband, James Grant, and their three daughters. “It was always my passion.”

As Varel and Grant turned the company they founded, the Starworks Group, into a powerhouse, they opened satellite offices in London and Los Angeles — and acquired homes in those cities, which Varel promptly furnished. About a year and a half ago, she decided to consolidate and shipped the furniture back to New York.

“You know that book If You Give a Mouse a Cookie?” she asks with a laugh, referring to the children’s favorite in which one simple act leads to increasingly chaotic, comedic events. “It was like that.”

But in Varel’s case, moving her trove of tables, chairs, sofas and such to the U.S. led to another promising business. She set up the furniture in her loft and held an “event,” inviting people to come peruse. She sold the lot. “It tapped into my creative side I don’t always use,” says Varel, a tall brunette with a thick curtain of bangs. 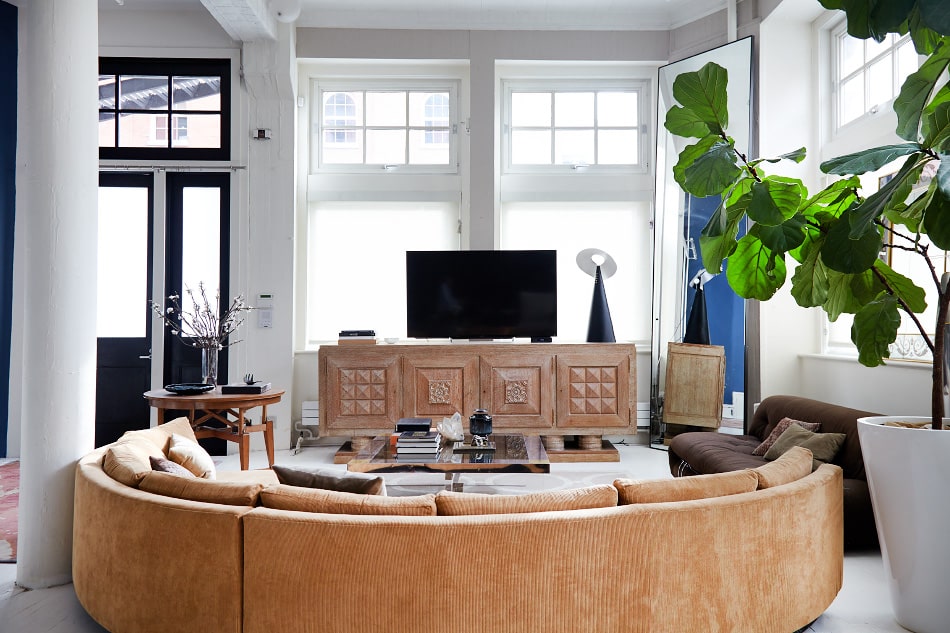 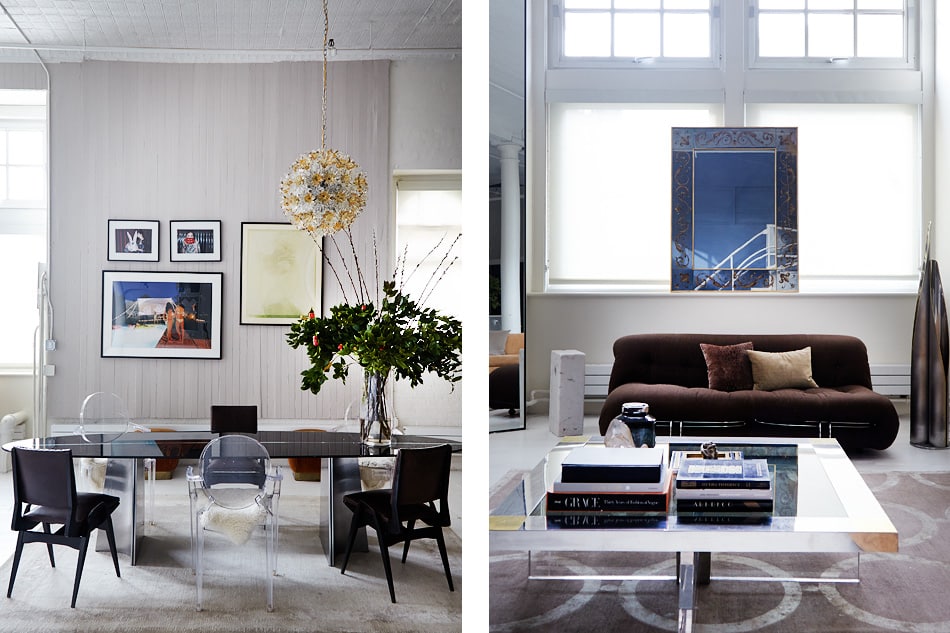 Left: An Italian sputnik chandelier hangs over the Luigi Saccardo dining table by Maison Jansen, which is surrounded by Maurice Pré chairs. The artwork is by Terry Richardson, Bert Stern and Tierney Gearon. Right: A custom iron mirror leans against the windows above a Soriana settee by Tobia Scarpa. The coffee table, which Varel is not parting with, is by Romeo Rega. 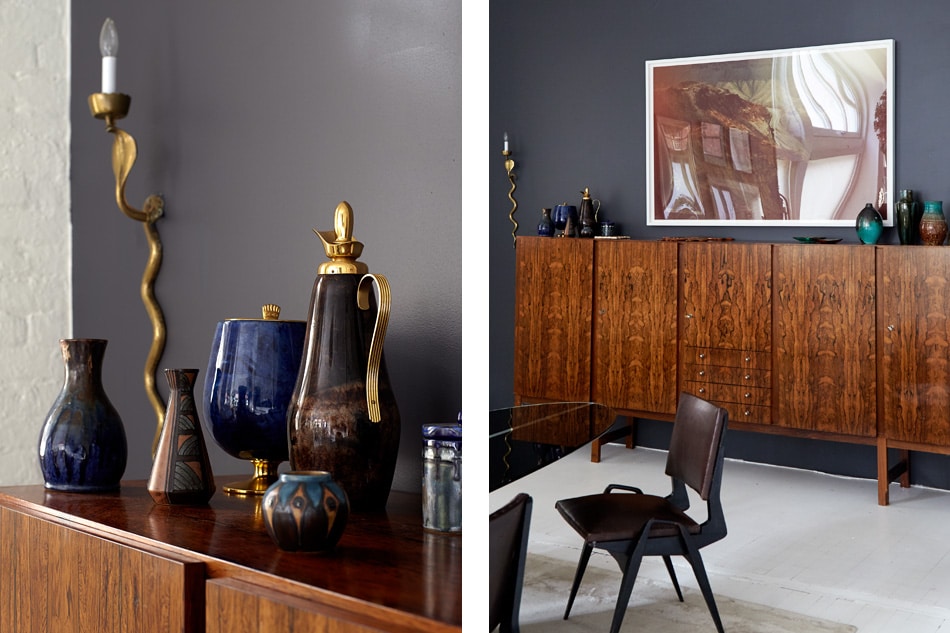 Left:Bronze cobra sconces are mounted by a set of ceramic pieces, including one each from Quimper, La Borne and Aldo Tura. Right: A Guy Aroch photo hangs over a Danish highboard cabinet. 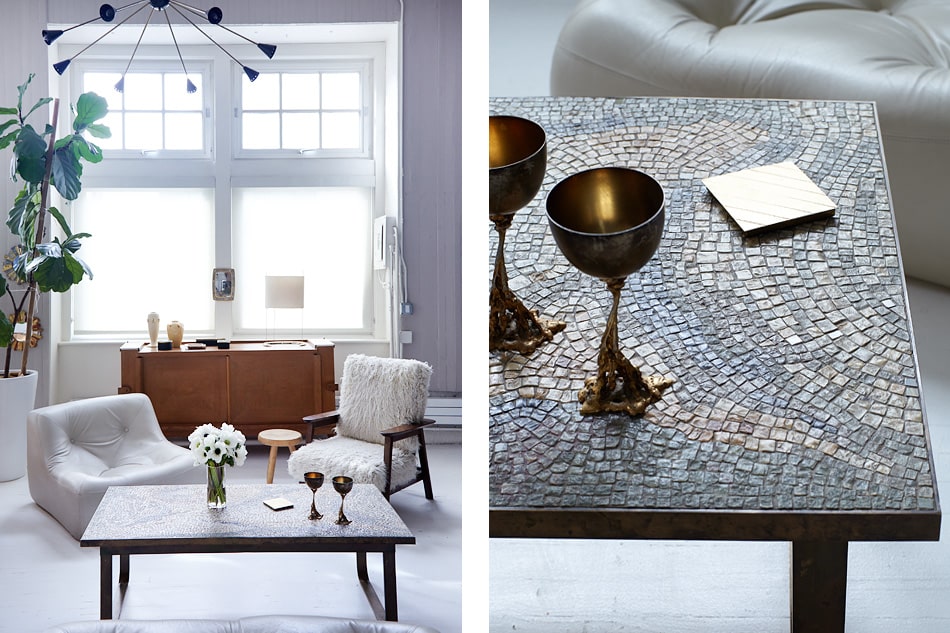 Left: A Michel Ducaroy for Ligne Roset leather chair is paired with a Charlotte Perriand high stool and a René Gabriel lounge chair in front of a Guillerme et Chambron wooden sideboard. Right: A pair of Gabriella Crespi chalices and a brass card box are displayed on a mosaic-top coffee table.

Varel didn’t want to open a store. Instead she hoped to create what she calls an “experience” a few times a year, either in her own home or at strategic venues. Last May, for instance, she set up an installation at the Robert Kuo showroom in SoHo. She expects to hold her next event later this month. Her finds are available year-round on 1stdibs, where her prices range from less than a thousand dollars for a set of Jacques Blin ceramic cups or vases to about $14,000 for a Danish rosewood sideboard. Her loft is also open by appointment. 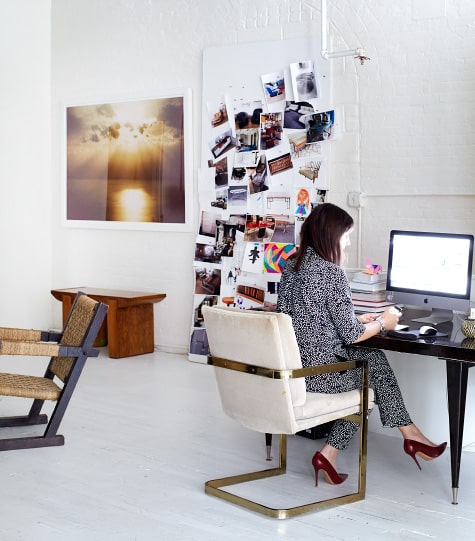 This Place is not dedicated to a particular era or nationality, but it tends to be heavy on French and Italian designers. “I love Deco,” Varel says. “I love the fifties. I love the sixties and the seventies.”

On buying trips — mostly during her frequent jaunts to Europe — Varel relies on her own taste and lifestyle. “I’m not a snob at all. I will buy from anybody as long as I like an item,” she says. “Of course, it brings more glamour if it belonged to Marilyn Monroe, but it’s also OK if it’s from someone’s garage.”

Lately, she’s been excited about French steel pieces from the ’70s. “We’ve seen chrome. We’ve seen brass,” she says. “Steel is a material that feels fresh.” Her current dining table, from Maison Jansen, has a brushed-steel base and smoky-glass top in the shape of a surfboard and is surrounded by a charmingly eclectic mix of chairs.

The question is not just hypothetical: She rearranges the loft every few weeks, collaborating with her friend, the creative director Melissa Bowers, of M.A. Bowers, Inc. “My kids are amazing gauges, like, ‘This is itchy, Mom,’ or, ‘This is awesome,’ ” Varel says. After the pieces are examined and photographed, she sends them to storage and starts over again. (She stows some inventory in her basement, most in a warehouse.)

Some pieces are harder to part with than others. Eyeing a circa 1960s De Sede leather daybed, she says, “It’s so comfortable and so nice, it’s hard to cast off. I think it’s a keeper.” (Still, she listed it on 1stdibs for $8,750.)

On this cold, rainy fall morning, Varel has just finished unpacking and arranging a new shipment. The 1960s sofa she’s sitting on, by Guillerme et Chambron, is curved, with a wood frame and green cushions. “They did a lot with this folksy, heavy wood in the mid-twentieth century,” she says. “My daughter says it looks like a cat-lady couch.”

There’s another curved sofa nearby, an Italian piece from the ’50s in blue velvet. In yet another sitting area, a large circular corduroy couch by Milo Baughman dominates with a kind of haute rec-room feel. Next to it is an inventive table by Marcel Gascoin from the ’50s equipped with a mechanism to adjust its height for use as a dining, side or cocktail table.

The ambience is low-key, although Varel jokes, “Having Russian roots, I like a little bit of sparkle.”

Varel was born in Russia, emigrating to Canada with her family when she was four years old. They  settled in Vancouver and later moved to New York. By the time she was 20, she was assisting a club promoter,  soon becoming a model booker. She met the British Grant while on vacation, and in 2000, when she was 26 and Grant just 22, they started Starworks. 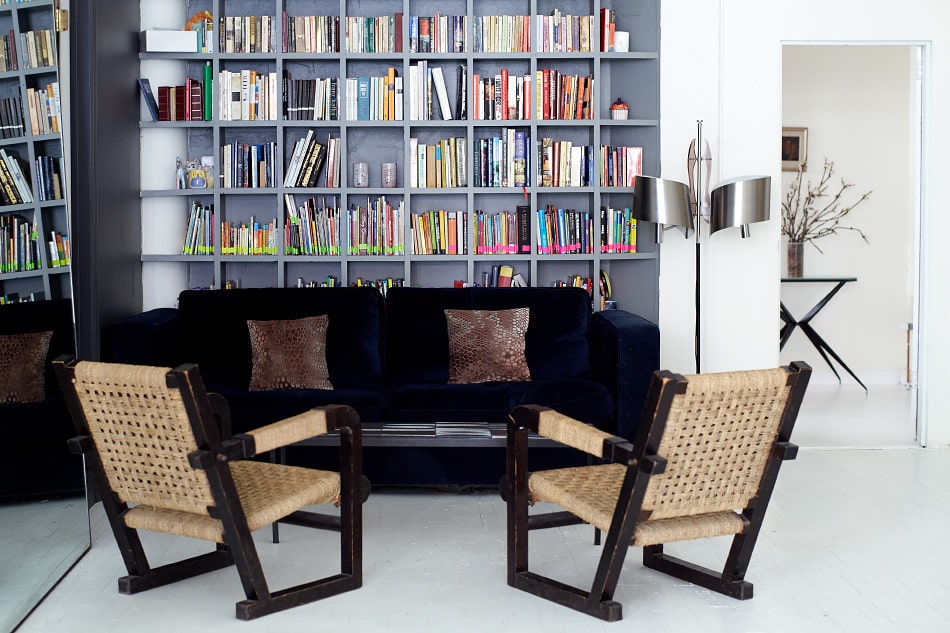 In the library area, a pair of woven chairs attributed to Francis Jourdain face a Navette coffee table by Roger Capron. The floor lamp is by Maison Charles. 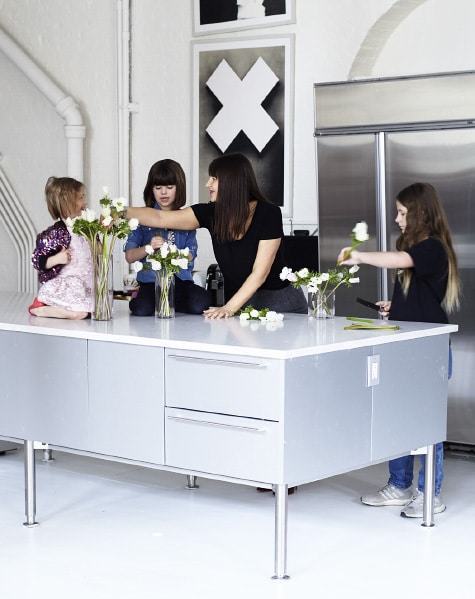 Varel arranges flowers in with her daughters, from left, Ophelia, Delilah and Ava Lily.

They launched the agency just as fashion companies — and fashion magazines — were beginning to favor celebrities over models for ad campaigns and editorial layouts. Most designer brands, however, lacked solid connections to Hollywood. Starworks became the bridge between the two worlds. “I was always really good at sensing what was on the cusp,” Varel says.

The first couple of years were slow. “We’d pick up the phone and go, ‘Starworks,’ and they’d be, like, calling Starbucks,” she recalls.

But business soon boomed, and Starworks expanded to several other related services, including public relations and representing makeup artists, stylists and other industry talent. Today, Starworks is considered one of the leading brand strategy and creative agencies connecting brands to global youth audiences. (As testament to their success, Vice Media bought a large stake in Starworks last summer; Varel and Grant continue to run the operation.)

With This Place, Varel says, she’s tapped into a whole new crew of people as furniture-obsessed as she. “I could talk about furniture all day long. Now I’ve met other people who can, too,” she says.

She also has plenty of crossover clients from the fashion world, whose denizens tend to swoon over good design of all types. “Fashion and decorative arts go together,” Varel says. “You want to see things in a certain way, whether it’s on you or around you.”

Visit This Place on 1stdibs