In Her Dramatic Italian Home, Annette Klein Shows Us Her Cache of Historic Earrings 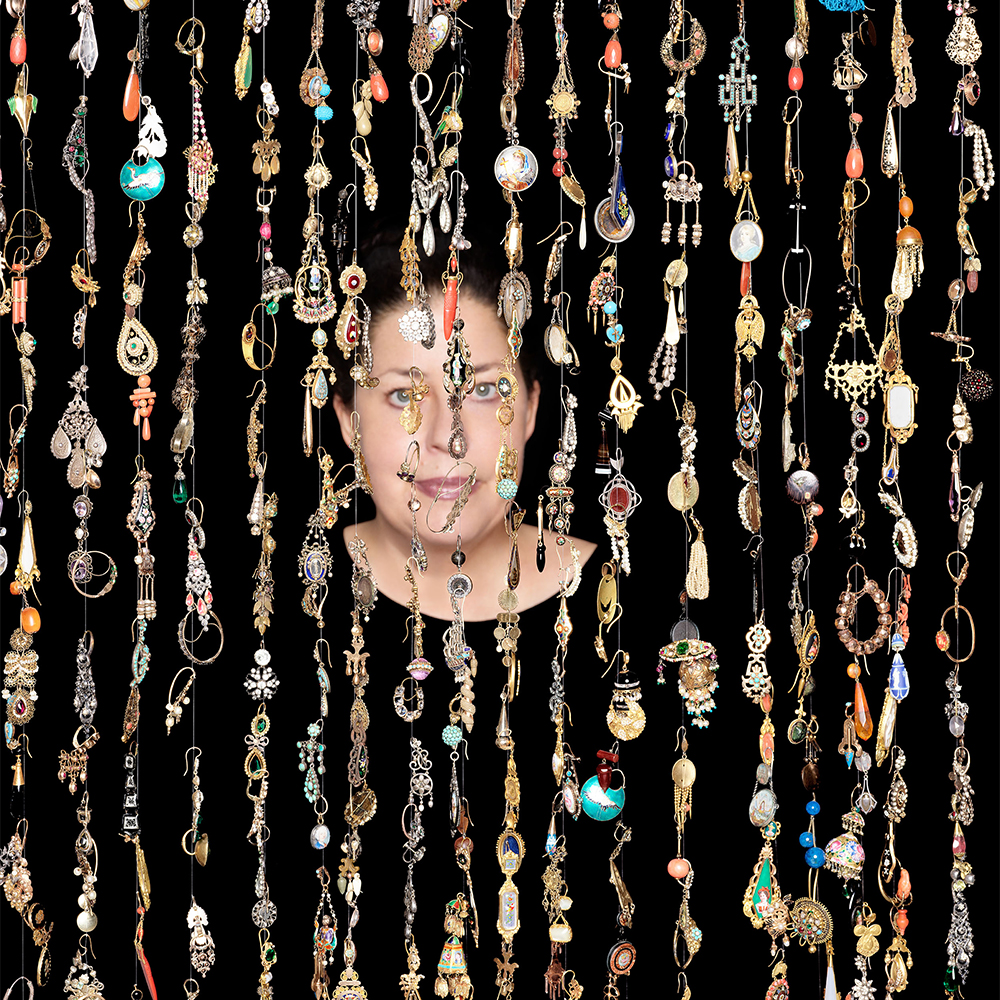 An academic with a keen eye for the market, Klein has had a passion for collecting since childhood. Photo by Giovanni Romboni + Andrea Dalleluche

December 5, 2021When is an earring more than an earring? Always! says collector Annette Klein, whose interest in these adornments is fueled not just by their physical beauty but also by the clues they convey to the social and economic standing, religion, even profession of the women who originally owned them.

For her, uncovering the mystery behind each piece is a large part of the fun of collecting. “Putting earrings back into their regional and historical context is preserving their significance and remembering the women who wore them,” she says.

Klein’s collection — comprising more than 2,500 sets of earrings, most of them European from the 18th and 19th centuries — illustrates her point. Among her treasures are a 20th-century English pair whose amethyst and peridot stones reflect the signature colors of the suffragist movement and Neo-Renaissance-style ones, decorated with miniature painted portraits inset with real diamonds.

Beyond the intriguing backstories, “collecting antique jewelry is also a very good investment,” says Klein. “I am always observing the market, and the prices have been going up constantly, so you can’t really lose.”

The German-born Klein, who lives in a restored 14th-century church in Lucca, Italy, with her husband, famed photographer Massimo Vitali, has been collecting earrings since childhood. With a PhD in theater history, she considers the jewels to be works of art in much the same way that costumes are and brings an art historian’s approach and eye to her pursuit.

In fact, on her colorful and chic Instagram site, @mypendeloque, she posts examples from her holdings paired with contemporary photography and historical paintings showing similar styles of earrings.

Klein’s dream is to exhibit her complete trove in a museum for the general public to look at and learn from. In the meantime, she sat down with Introspective to discuss why earrings are such personal and revealing adornments.

Why earrings? What do they tell us about specific places and periods?

Pierced earlobes for earrings are the oldest way there is to transform the body. I have always been fascinated by their stories, learning about the provenance and the historical context, like the Italian earrings I own that were for the daughters of bakery owners. They are shaped like shovels used to put bread in the oven — at least that’s what the legend says.

Materials also tell us something about the regional resources. Italians, for example, made jewelry with what they found directly in front of them: coral from the sea, pearls from the water, lava rocks from volcanoes.

You have so many fun things from the Victorian era. Can you tell me what is special about that time in the history of jewelry?

The industrial fabrication of jewelry started during the Industrial Revolution of the mid-nineteenth century, especially in England. Jewelry became more fashionable, and the market grew incredibly, because the process went from purely handmade to more manufactured.

The Victorians were always looking for something new. They were so full of ideas and insatiable about novelty that they would come up with everything. Jewelry was made out of the heads of hummingbirds, translucent fish scales, tiger claws, milk teeth or real scarabs. They used woven sheep and cat gut, braided human hair or horsehair.

And they played with messages and symbols. I have a pair of earrings in the shape of a Maltese cross with the enameled letters D-O-N-T and a Vauxhall glass bee in the center as an encoded message: Don’t Be Cross!

What is your favorite period for jewelry?

My favorite time is right after the French Revolution. I am quite a minimalistic person. I like simple things. So, after the opulence of the rococo period, there was this incredible shift in fashion to chemise dresses and short hair and from big jewelry like the girandole style to a very simple style. During the First Empire/Directoire period, women got rid of their corsets, and everything became lighter, with less artifice.

This lightness is reflected as well in the jewelry. Typical for this period is the poissarde, a creole-type earring with a decorative element like a stone or a filigree. They became hugely fashionable. It is said that originally the fishwives wore them at Les Halles, in Paris, hence the term.

Some of your earrings are so delicate and elaborate — the chandelier-style girandoles and the intricate pendeloques. Do you ever wear them?

When I get a new pair, I wear them at least once — it’s a rule I have. But for security reasons, I keep the whole collection in a vault at the bank.

I do keep three or four pairs at home and swap them out. Right now, I am wearing a beautiful pair of onyx earrings with white enamel from the eighteen seventies or eighties. They are American, very modern in style and somehow recall the promise of the New World. They feel like optimism and pledge prosperity.

You’ve been collecting since you were five years old, when you bought a single antique earring at a flea market. How do you collect now? Do you have a wish list?

I am sort of a truffle pig. I go to incredible places to find earrings. And I do it on quite a modest budget, which is becoming more and more difficult.

My process has changed as I have learned more about jewelry. I might buy a pair not knowing anything about it because something about it talks to me, and later I do the research for it.

Trading with dealers is also a fun way to enlarge the collection. I collect only earrings. But sometimes I find interesting items that a certain dealer might be interested in, so we make an exchange, and it becomes the perfect win-win. 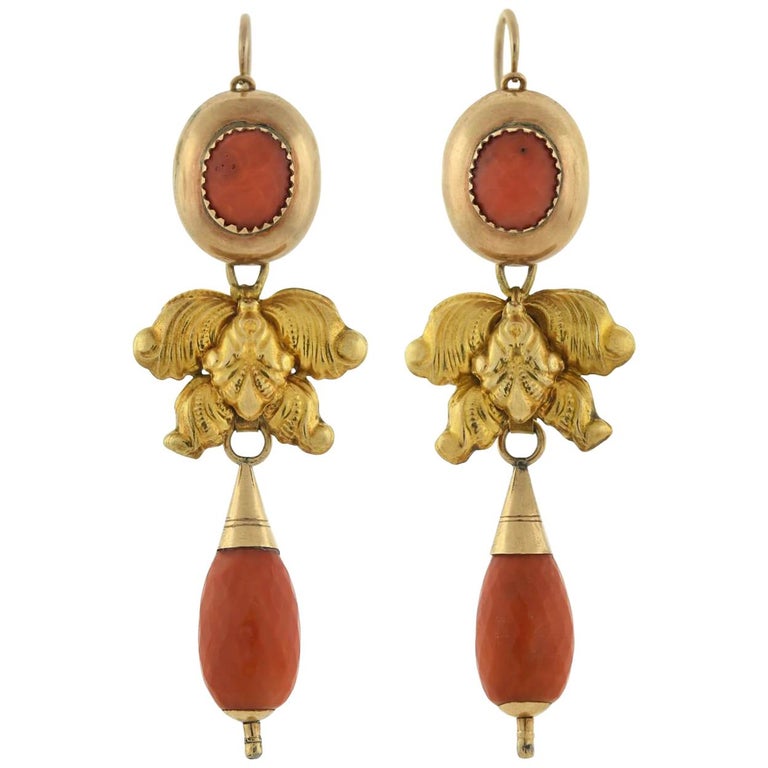 “Coral for me is Italy! The ‘red gold’ as ornamental material goes back to ancient times, and this coral has been harvested and processed along the Mediterranean coast of Europe and Northern Africa for centuries. This wonderful pair recalls the Pendeloque style and is typical for Italian coral earrings with the unpolished and soft red hue of the coral.” 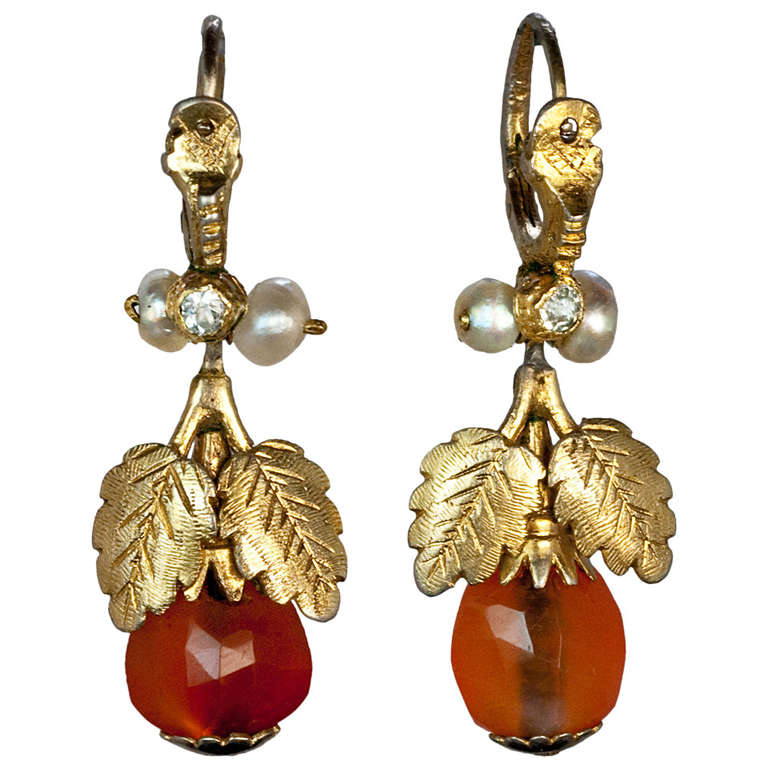 “One of my favorite styles ever. Quite difficult to find and so flattering when worn, these Russian earrings go back to the second half of the eighteenth century and have a very distinctive design. A drop of stones like garnet, amber, ruby, emerald but also coral and colored glass is suspended from the fitting with a two- or sometimes four-pearl-secured hinge flanking a small gem. Another repetitive motif is the ouroboros which serves as the back-to-front closure.” 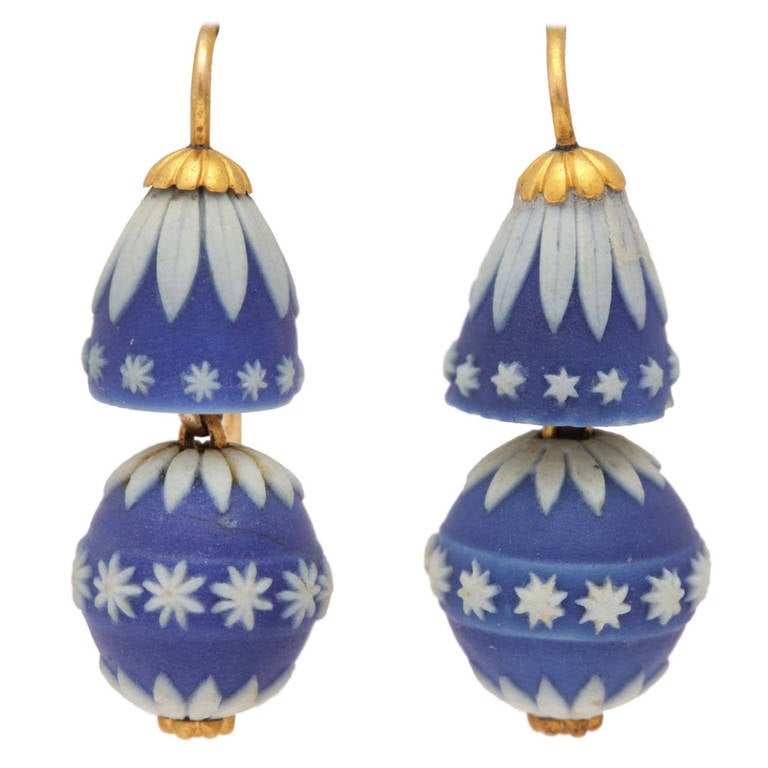 “Quite rare are these lovely Georgian Wedgwood earrings. Not that many have survived the last centuries. Josiah Wedgwood had increasing success in Europe and became famous for his jasper-ware, which was supposed to look like ancient cameo glass. This pair of earrings shows the very typical pale blue color of the early jasper ware. ” 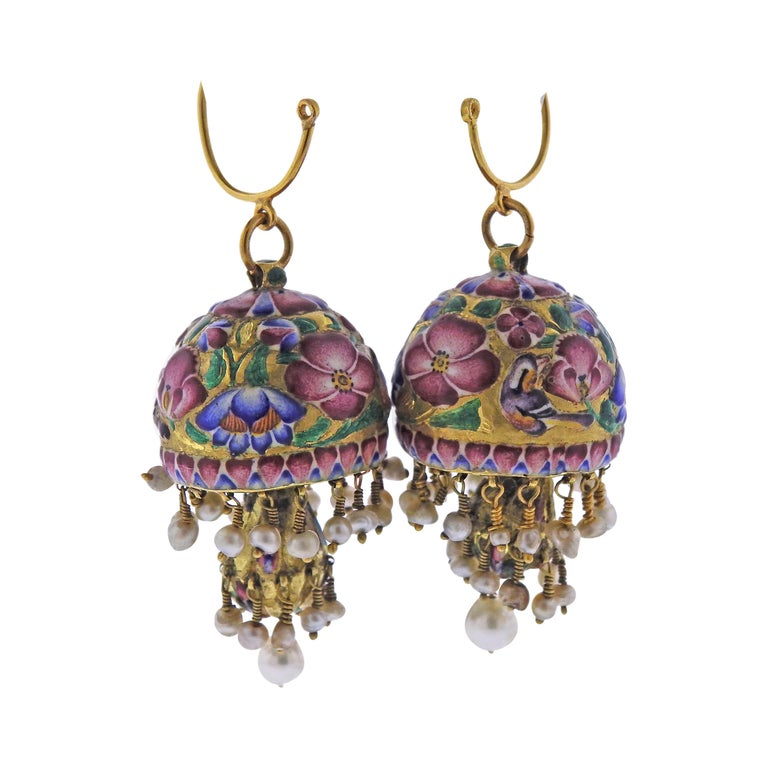 “Like the Indian culture, Persia had a persistent tradition of fine enameling. These typical cone-shaped earrings, usually of a quite substantial size, are richly enameled with blossoming flowers and tiny pearls, which create a lot of movement.” 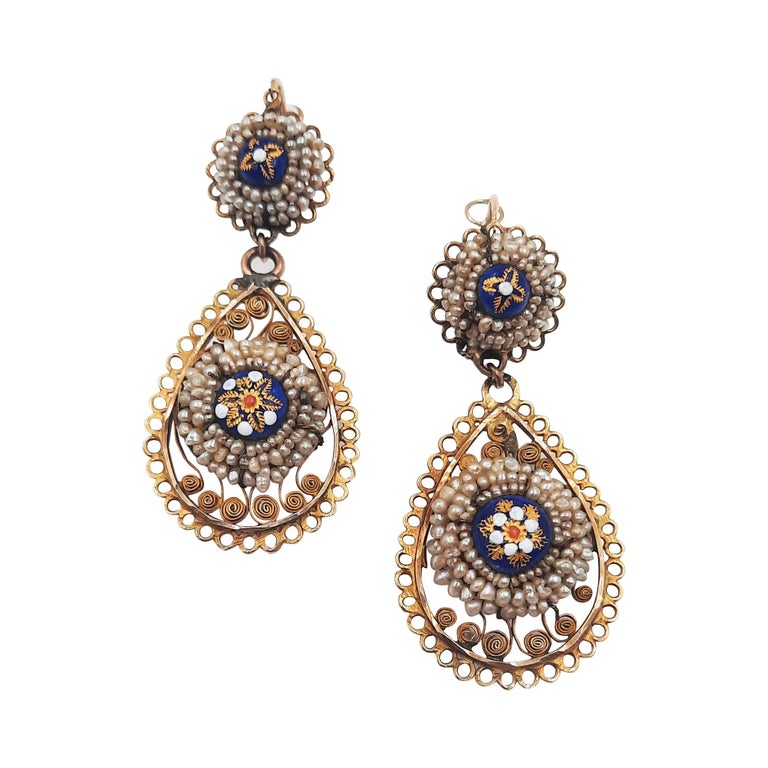 “I can hardly resist Italian traditional earrings, which were worn with the many traditional costumes in the various regions of Italy. This medium-size pair is interesting, combining Italian craftsmanship and design with the enamelled plaques from Bourg-en-Bresse, the so-called Emaux Bressans, which shows a form of — early — globalization and the constant exchange and trade between the different countries.” 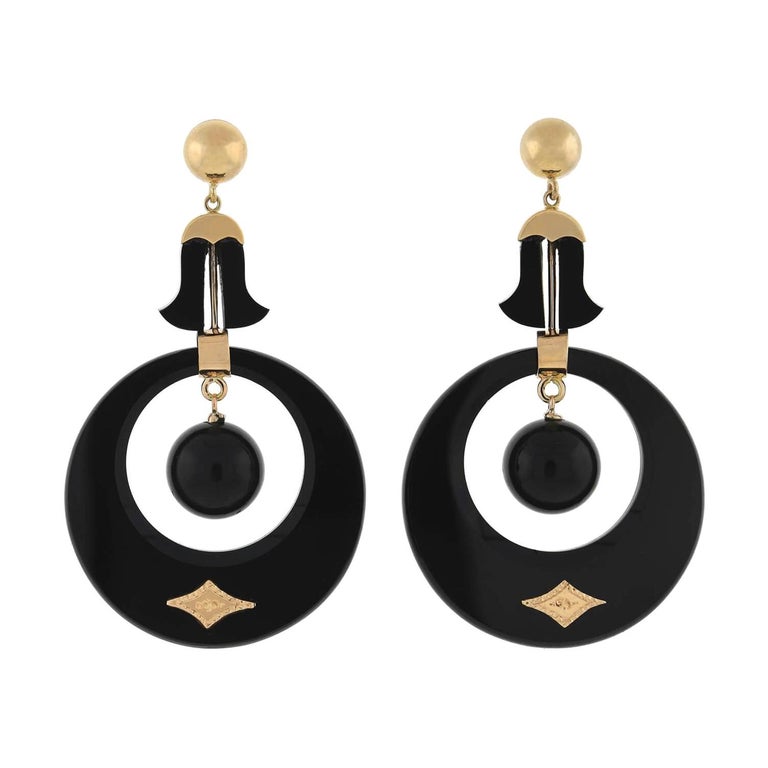 “In the 1880s, black jewelry was no longer only worn for mourning reasons but became a fashion statement. French Jet, Whitby Jet, Gutta Percha or Vulcanite were the less expensive materials that flooded the market. Bold and polished onyx shapes applied with gold elements, black enamel or white enamel dots created the quite dramatic and very modern style that is characteristic of pieces made in the U.S.A. between 1880 and 1890. This pair represents this fashionable design very well.” 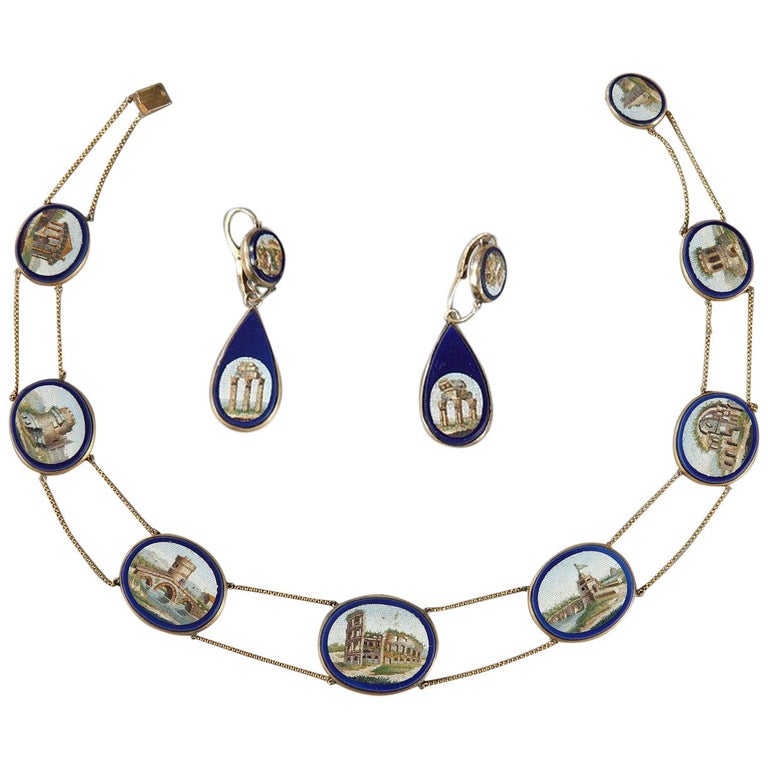 “After Marie-Louise, empress of France, received a micromosaic parure with antique sceneries for her wedding in 1810 as a gift from her future husband Napoleon I, micromosaic became increasingly popular. This parure dates to around 1820 with the typical festoon design and the distinctive Roman ruins and landmarks.” 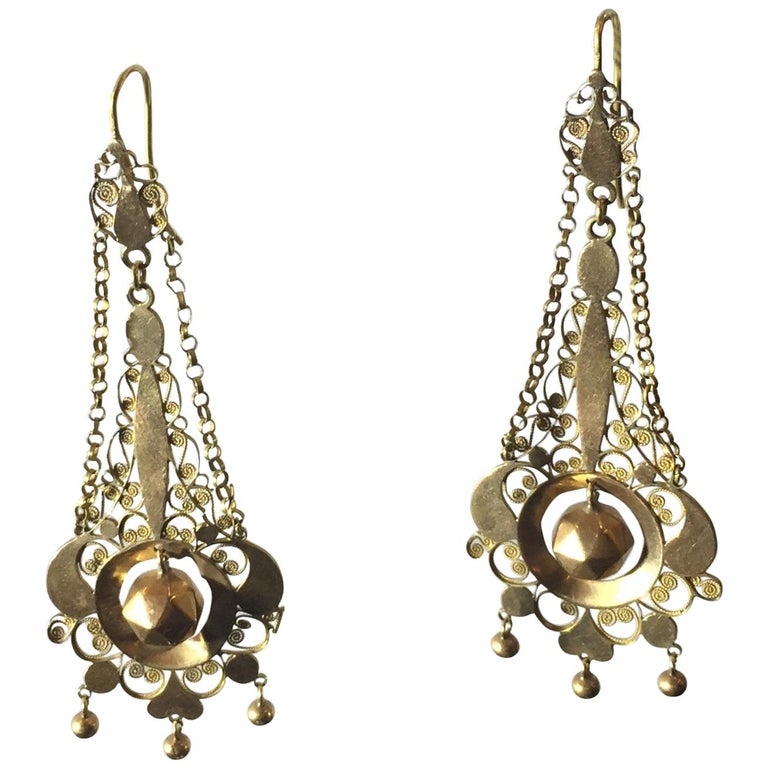 “These long and wafer-thin earrings, often made with chains and in at least three sections with multiple dangles, became very popular in post-revolutionary France as well as in Italy. Gold was expensive and this technique allowed the use of a small quantity to make less appear to be more. Gems were substituted mostly by enamel. This style, ‘à la Grècque,’ was favored for its simplicity and considered classical and therefore tasteful. They are very light to wear and, being made of various sections, move beautifully.” 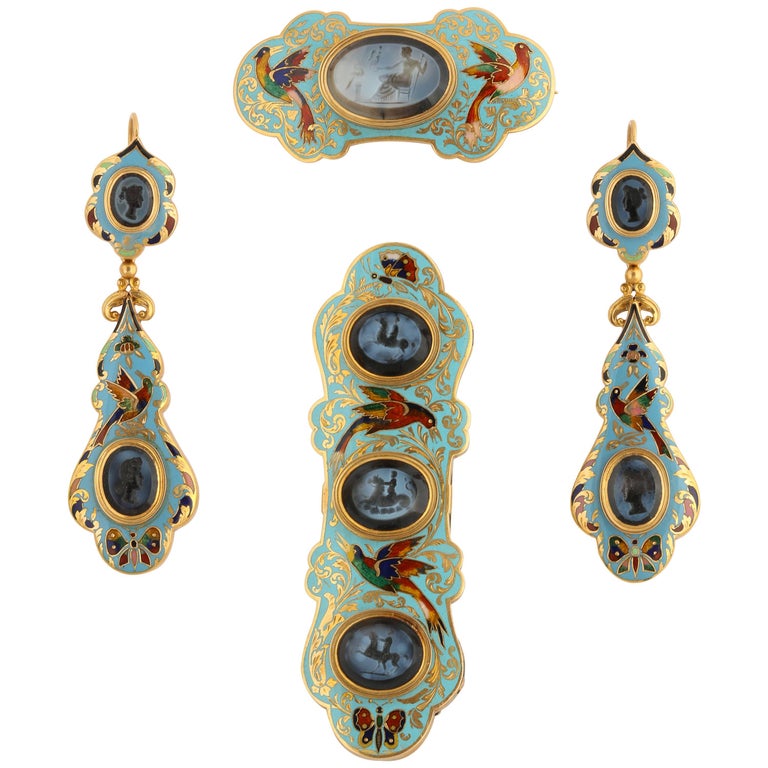 “Please let me find this stunning parure under our Christmas tree! This Falize-style set is truly stunning in the combination and contrast of the joyful enamel with colorful birds and cheerful butterflies and the cloudiness of the agate intaglios, which almost look like Grisaille miniatures. The belt clasp could be transformed into a hair clasp — just imagine a hair knot with this clasp! Although there are many beautiful and desirable earrings, this remarkable parure is definitely my number one.”