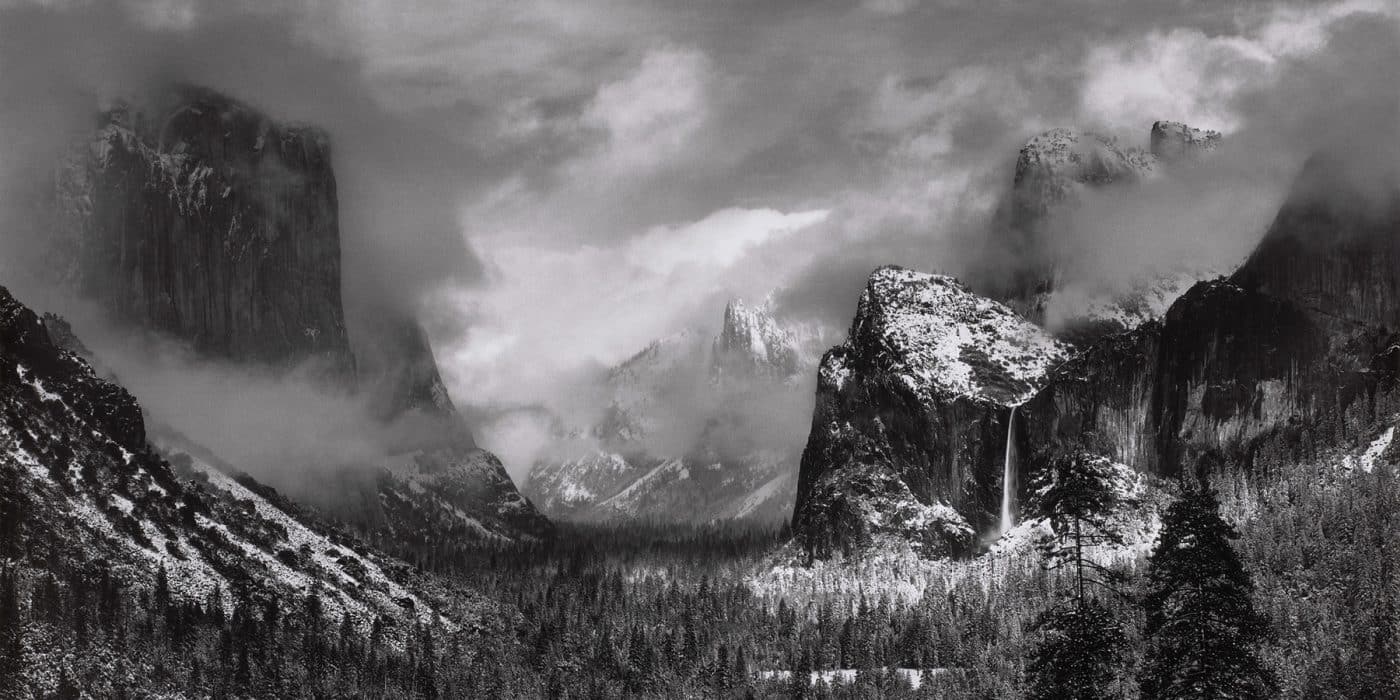 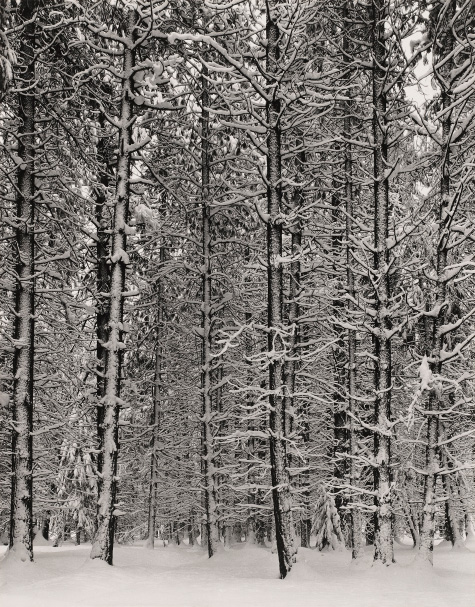 Ansel Adams’s crisp, monumental black-and-white images of a pristine American wilderness did much to shape the public’s view of the Western landscape and popularize photography as an art form in the mid-20th century. “He’s this larger-than-life character, often treated as though he rose from the ashes of nothing,” says Karen Haas, curator of photographs at the Museum of Fine Arts, Boston, which in 2012 received from philanthropist Saundra Lane the almost 500 Ansel Adams prints she and her late husband, William, had collected, the largest such holding in private hands. “What I think is interesting is to see how nineteenth-century artists were discovering many of the views and how Adams, sixty or more years later, was going in and codifying those views, now permanently in so many of our minds. If you are a photographer of the Western landscape today, Ansel Adams is the five-hundred-pound gorilla everyone has to deal with.”

Haas has drawn on the Lane gift in organizing “Ansel Adams in Our Time,” on view at the MFA through February 24. The exhibition uses Adams as a pivot between 19th-century images by such artists as Carleton Watkins, Eadweard Muybridge and Timothy O’Sullivan and 21st-century responses to his iconic views by more than 20 contemporary artists, including Catherine Opie, Abelardo Morell and Richard Misrach. 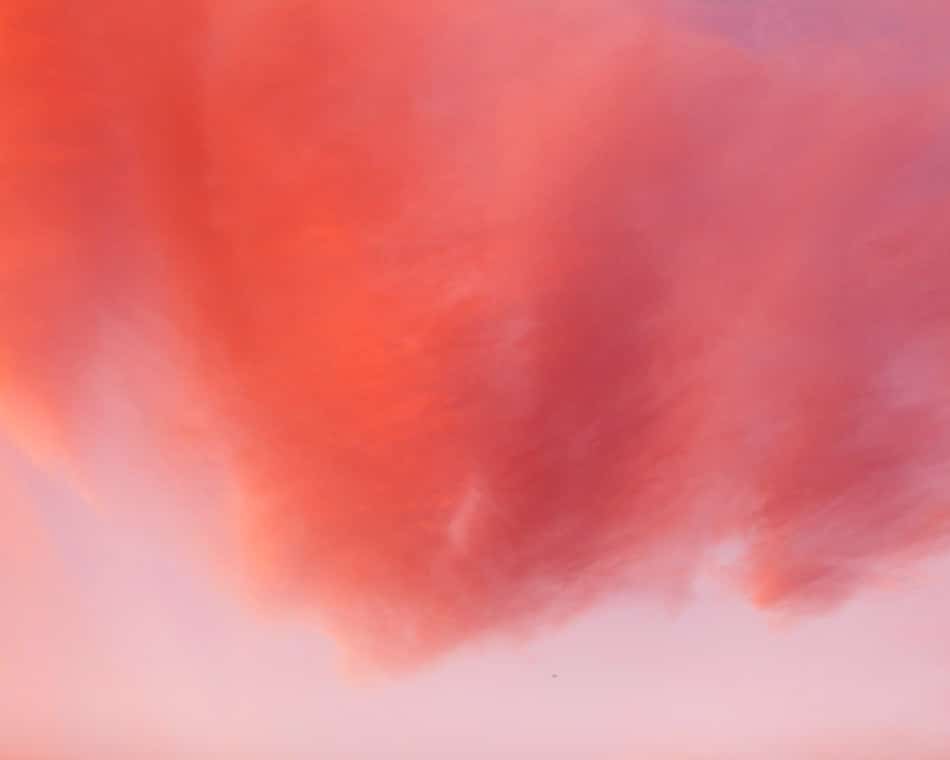 This premise — a fresh take on Adams, who has been the subject of many monographic chronological exhibitions — is established in the first of the show’s eight galleries. Adams began taking photos with his new Kodak Box Brownie camera as a teenager in 1916, on his first trip to Yosemite National Park. The show opens with some of these early images echoing similar views on an adjacent wall by Watkins, who as a survey photographer trekked into the wilderness with mules carrying supplies for his portable darkroom and wet-plate collodion process. “Watkins is laying the groundwork and cutting the path,” says Haas.

On a third wall of the gallery are contemporary images by Mark Klett, born in 1952 and now based in Arizona. Klett collaged copies of Adams’s and Watkins’s images into large panoramas that he shot of the same views, almost fanatically matching the time of day and year and showing what’s beyond the frame of the original images. “In large part, he’s wanting to explore how things have changed,” says Haas, pointing to all the people paddling down the river in Klett’s 2003 Panorama showing Carleton Watkins’s camera position for Yosemite Falls and Merced River, a composite the artist made with his frequent collaborator Byron Wolfe. “The popularity of these wilderness views has turned these spaces into veritable parking lots in the summer.”

The next gallery looks at how Adams marketed the view, turning his hobby into a profession at a time when there were no galleries devoted to photography. It features the 18 images of the High Sierras that he published as a portfolio in 1927 in an edition of 100 selling for $50 each. “He didn’t think anyone would buy something called a photograph, so he called them Parmelian prints and put them in a box,” Haas says.

The exhibition goes on to show Adams taking up the large 8-by-10 camera and becoming a master of sharp, modernist prints. Shown side by side with O’Sullivan’s 1873 view of Arizona’s Canyon de Chelly is Adams’s meticulous 1941 rephotographing of the work (a copy of which he owned), along with two other Southwest images Adams made that year. Adams shot one of his most famous photos, Moonrise, Hernandez, New Mexico, after noticing the drama of the scene in his rearview mirror and pulling off the highway. He photographed an industrial plant in Carlsbad on paid assignment from the U.S. Potash Company, a mining corporation. 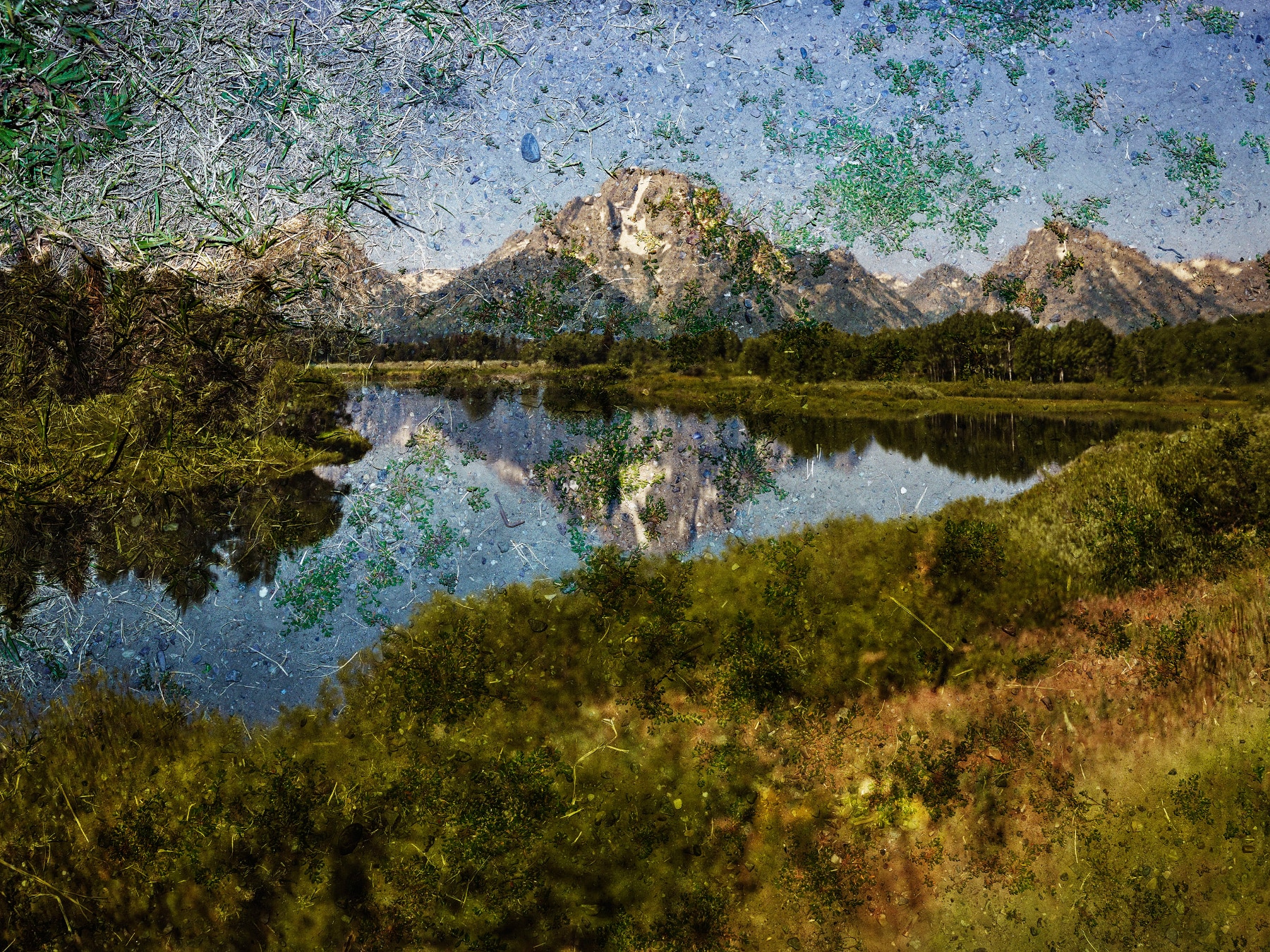 “It’s important to be reminded that Adams needed to make a living,” Haas says. “All these were made on the same trip but coming from different places.”

Another gallery, containing Adams’s mature, symphonic prints of the national parks, considers how contemporary artists have reckoned with his legacy. Photo silkscreens by Matthew Brandt could read as Adams images from a distance but up close are seen to be printed in ketchup and mustard or mole sauce. Catherine Opie made views of Yosemite similar to Adams’s but shot them in color and softened the focus almost to the point of melting. “The idea that the Western landscape has so clearly been historically the white man’s territory was for her a real feminist challenge,” Haas remarks.

Abelardo Morell used a periscope to project the view of Yosemite shot by Watkins and then Adams onto the cracked sidewalk of the adjacent parking lot. “It’s literally paving paradise,” the curator says, noting that Adams had to climb onto his car to crop out the parking lot in the foreground. 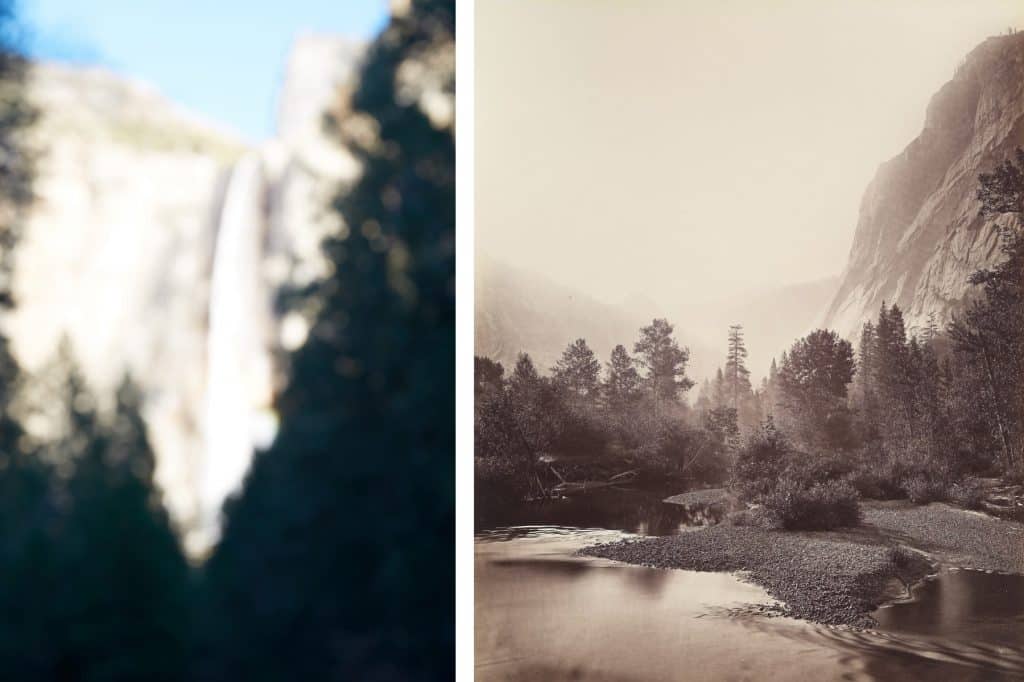 (Both Morell and Brandt are included in another exhibition, “From Ansel Adams to Infinity,” on view through January 27 at the Chrysler Museum of Art in Norfolk, Virginia, framing Adams’s works with those of a half dozen younger artists.)

The last galleries present less-idyllic views of the Western landscape, including Adams’s photographs of the eastern side of the Sierra Nevada, where Japanese internment camps were located. “He’s looking at this as a place where we send people that we basically want to disappear,” says Haas. She has juxtaposed these with Stephen Tourlentes’s images of the maximum-security prisons that have sprouted in the same area and Trevor Paglen’s photographs of drones and surveillance satellites circling the desert spaces. 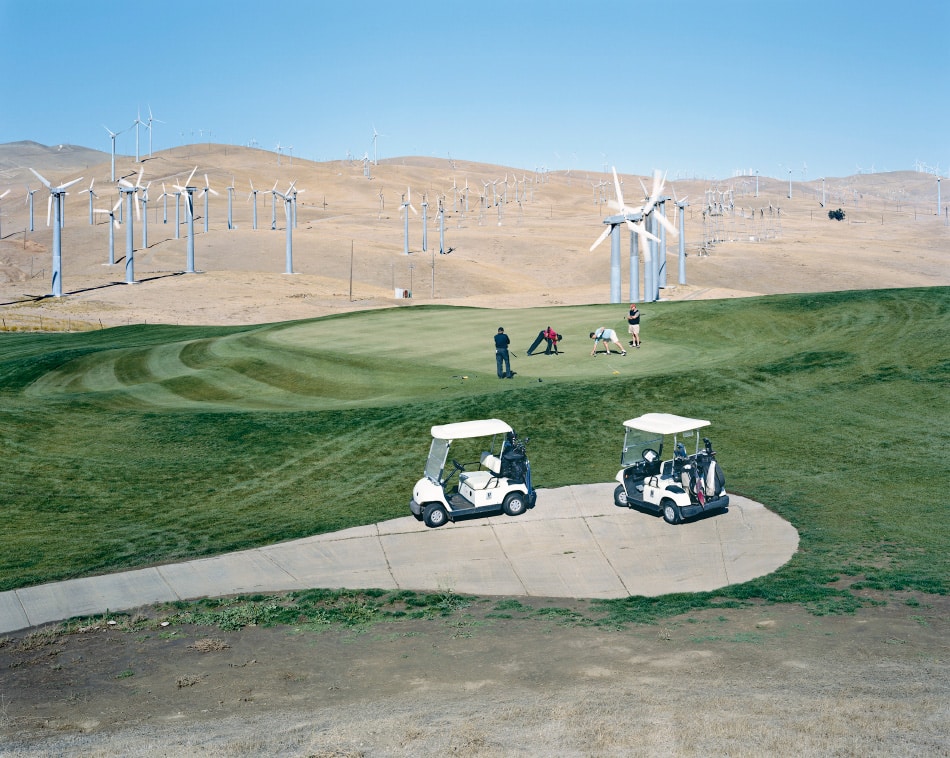 In Adams’s famous 1939 photo of a cemetery in Long Beach, California, a mournful statue of an angel in the foreground rises above distant black oil rigs. Mitch Epstein, also working in Long Beach, suggests a similar commentary with his 2007 image of oil rigs in people’s backyards.

“It was really interesting,” says Haas, “to look at Adams’s images in light of all the ways that we are undoing many of the environmental protections put in place in large part thanks to the work of activists like Adams during his lifetime.”