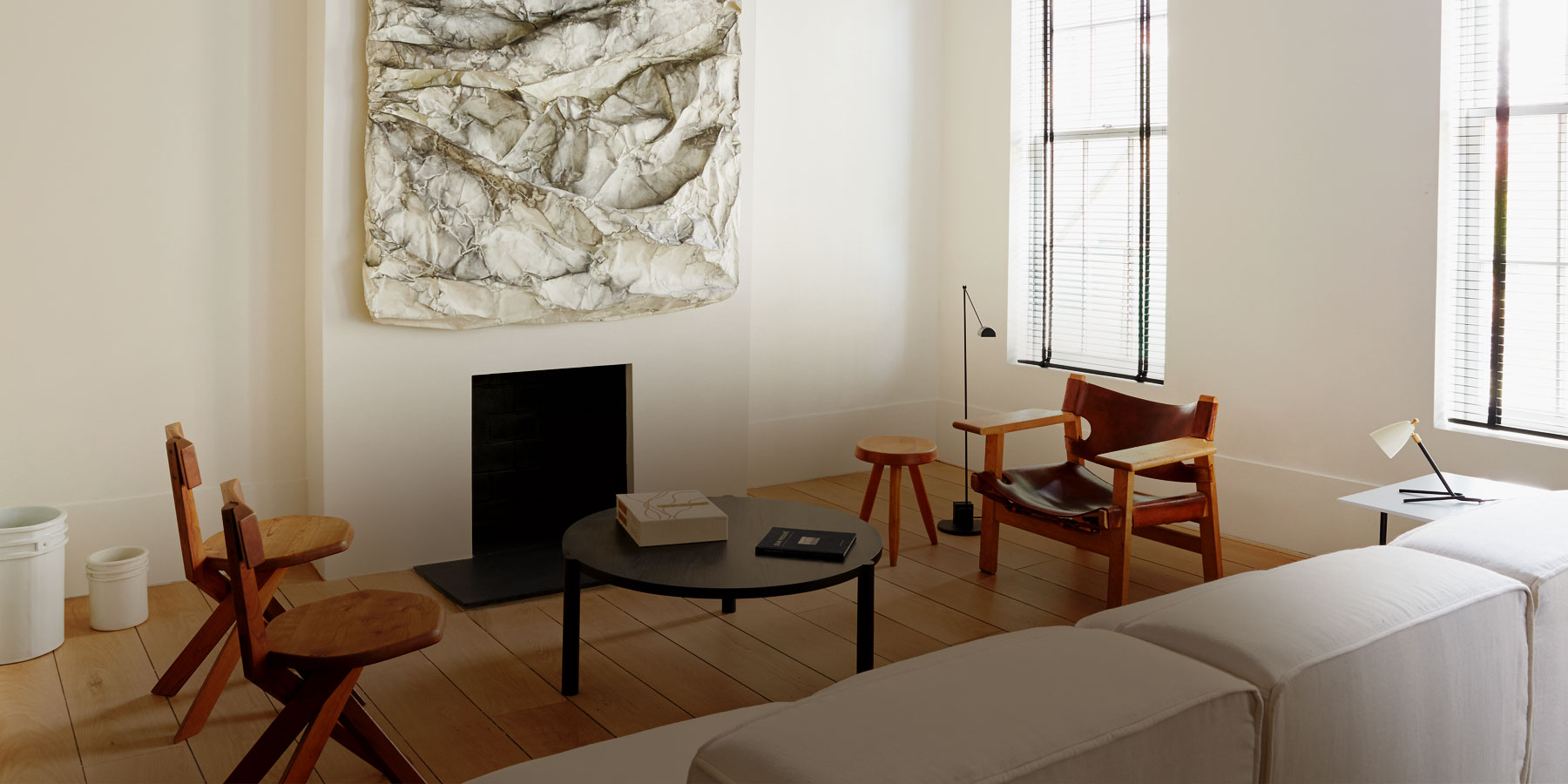 Real estate developers, interior designers, antiques dealers and, with the recent opening of The Dean, in Providence, Rhode Island, hotel owners, Ari Heckman and Will Cooper of ASH NYC have an unquestionably full plate. And they’re only just getting started. 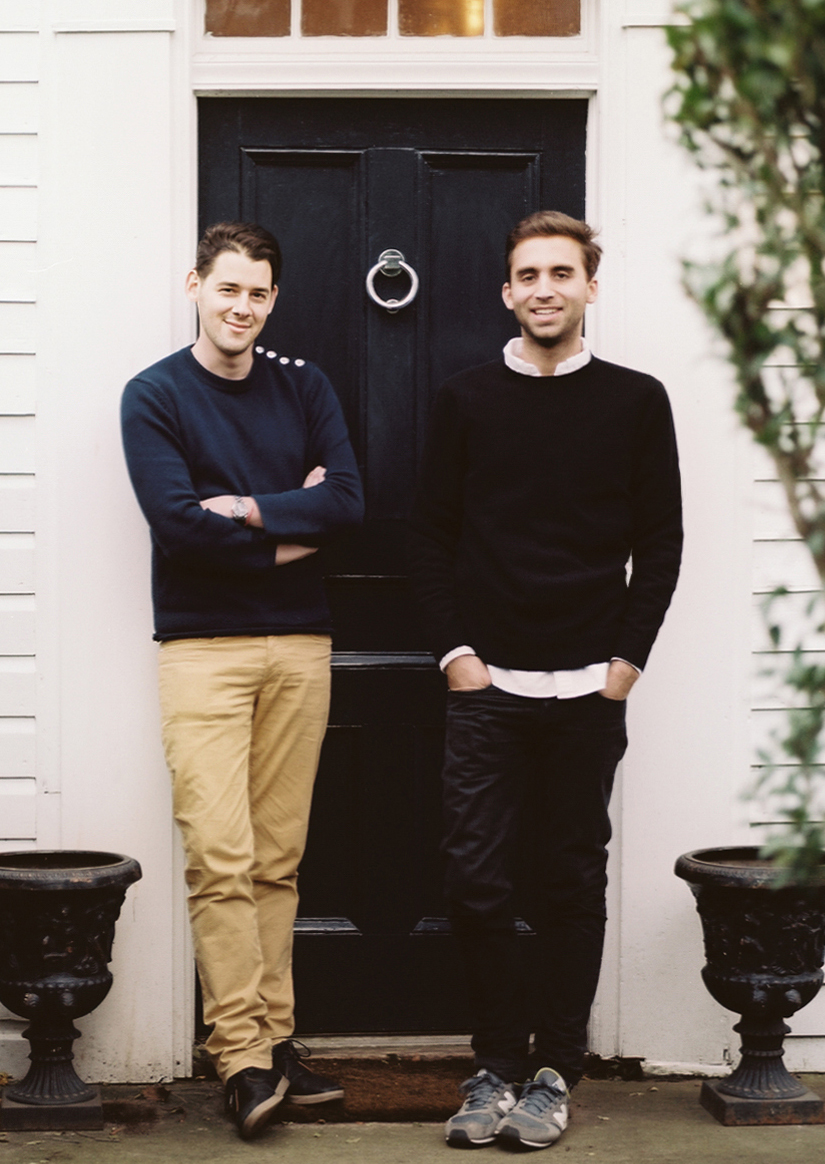 Over a recent lunch with the two principals of ASH NYC, a New York–based interior design and real estate development firm, a simple question appears to ignite a mini existential crisis. Asked why they’re moving their showroom and office, with its staff of around 12 (all under age 30), from one part of Williamsburg, Brooklyn, to another, creative director Will Cooper launches into a thoughtful stream: “I mean, it’s about ‘What are we now? Where are we going? What and who as a company do we want to become?’” Ari Heckman, ASH’s CEO, then chimes in: “We like constant change. We need to constantly reinvent ourselves because it forces definition, both in the present and in terms of where we are headed.”

Admittedly, what ASH is and where it’s headed are intriguing questions. Currently, the five-year-old company not only buys and develops real estate — a 75,000-square-foot former factory turned mixed-use development in Brooklyn’s Bushwick, a pair of gut-renovated historic townhouses in the West Village with ground-floor commercial space — it also undertakes interior design projects (often for young, wealthy bachelors) and sells antiques from its Brooklyn showroom and on a 1stdibs storefront. Last spring, ASH also curated a smart pop-up shop in the West Village, and at present, it does a brisk business loaning furniture for photo shoots, staging model apartments and designing lighting and furniture.

Then, in January, Cooper and Heckman pulled off their biggest coup yet: Opening their very own hotel, the 52-room Dean, in Providence, Rhode Island, whose Brooklyn-by-way-of-Brussels design was praised by the likes of the New York Times, Wallpaper*, Travel + Leisure, Monocle and Lonny before it had scarcely opened its doors. 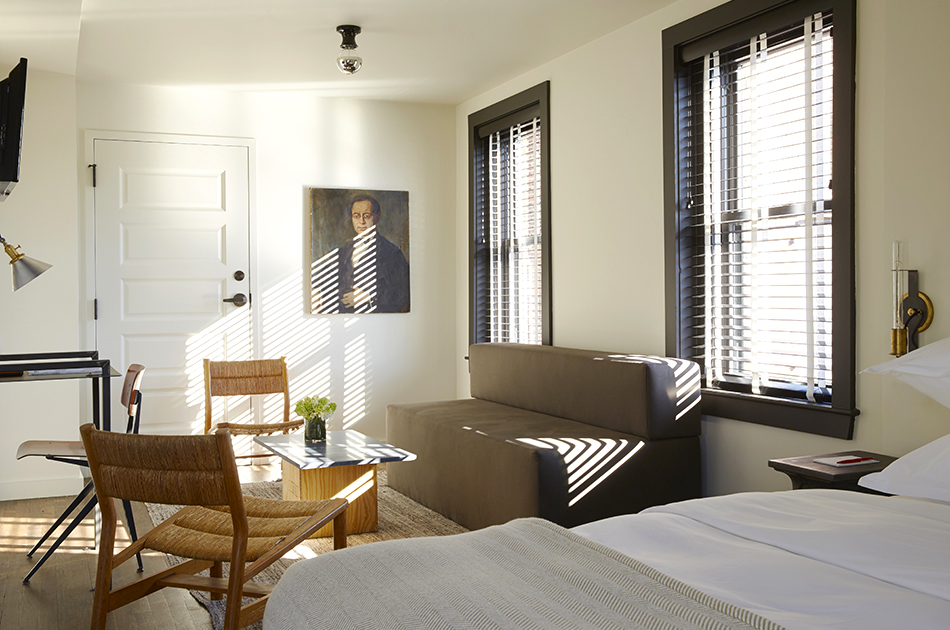 Guests of The Dean traveling as a group may book “The Heights” ­— comprised of four connected guest rooms (two king suites and two queen rooms) — on the hotel’s top floor. Photo by Christian Harder 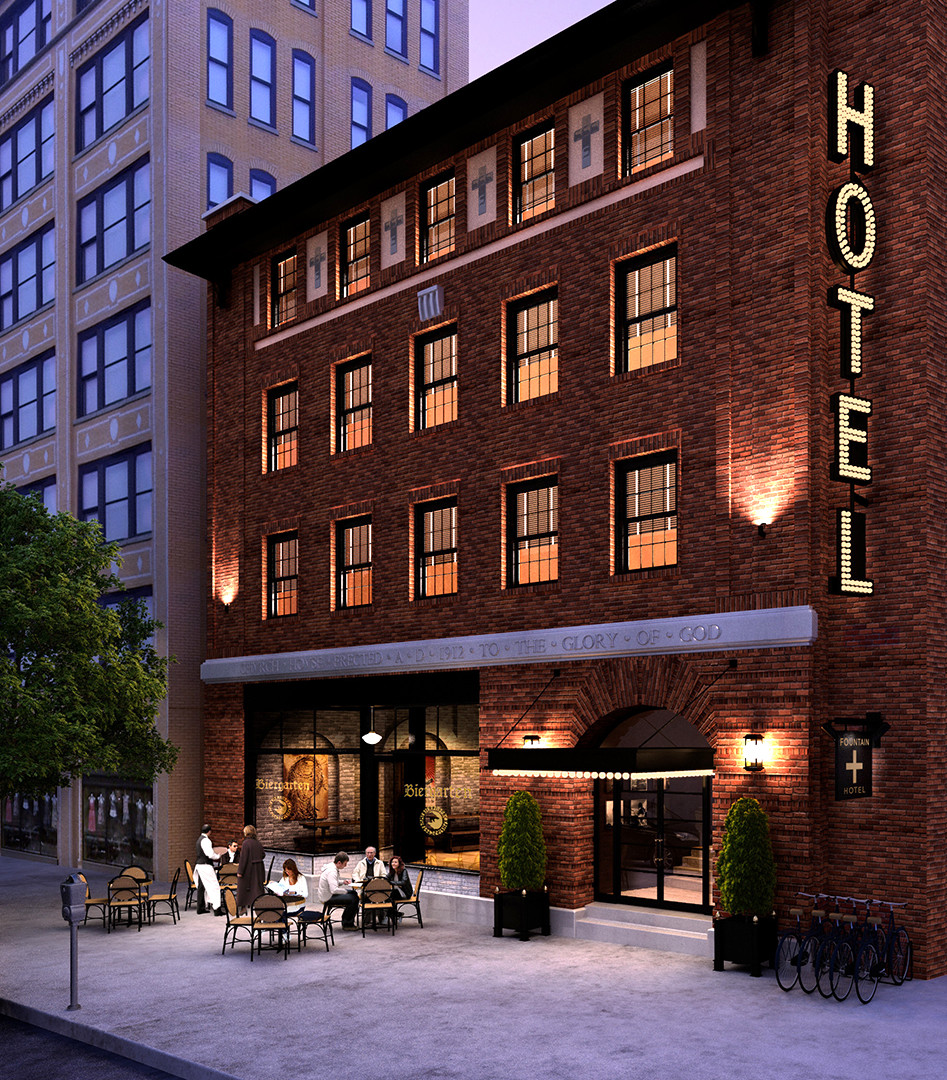 The Episcopal church originally built The Dean’s building in 1912, to house members of its clergy. A few 2014 updates (shown in a rendering here) include a ground-level German beer hall and vintage bikes out front for guests to use.

When asked whether in the future they might do the branding for their projects (the hip Manhattan creative agency Watson & Co. undertook the task for The Dean), Cooper exclaims, “We were just discussing that!” gesturing to a page of scribbled notes, arrows and lists. The duo’s energy — not to mention ambition — practically vibrates across the table.

Set in Providence’s historic Downcity neighborhood, The Dean occupies a 1912 landmark building whose previous occupants included Episcopal clergy members, vaudeville actors and strippers — though not at the same time. But while the hotel’s design choices touch on a saints-meets-sinners trope (how could it not?), its essential character isn’t easy to define: The public spaces range from a Tokyo-style karaoke bar to a tucked-away lounge inspired by Adolf Loos’s American Bar, in Vienna, to a lively German beer hall. The rooms are sleek but full of character, thanks to individual pieces picked up in Europe and around Providence.

“The experience of having our first guests at The Dean has been surreal,” says Heckman. “To see people touching the furniture and inquiring about the provenance while sipping coffee in the lobby is like watching a rendering come to life. It’s the definition of rewarding.”

Heckman grew up in Providence with an interior designer mother and a father who worked in real estate. His grandfather was an architect, and this triumvirate influenced him in ways both subtle and overt. “My grandfather said, ‘Don’t be an architect because they don’t get to make the big decisions. Be a developer or an owner,’” Heckman explains. 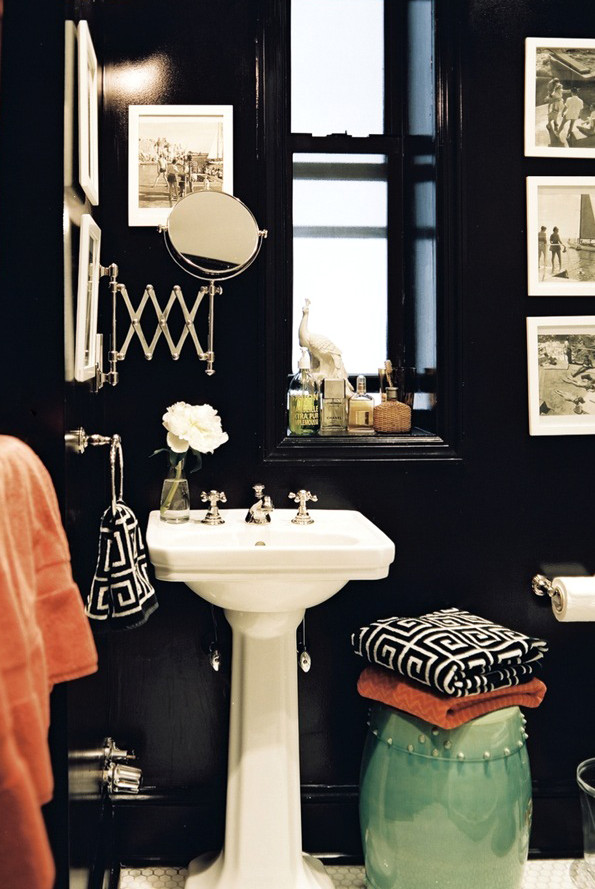 In a bold move, ASH coated the bathroom walls of a West Village apartment in high-gloss Benjamin Moore Black; the project was featured in the June/July 2010 issue of Lonny. Photo by Patrick Cline, courtesy of Lonny

Taking this to heart, he majored in urban studies within the architecture program at Cornell University. After college, he lived briefly in Argentina, worked for a developer back in Providence and then moved to New York to join the real-estate investment firm Cayuga Capital Management, in Brooklyn. There, he met his future business partner, Jonathan Minkoff, and the two founded ASH in 2008. (Today, Minkoff is the company’s chief financial officer.) To Heckman, ASH seemed to fill a natural, yet under-inhabited, niche. “Unlike other developers, we focus both on the business side and the actual human experience of inhabiting a space,” says Heckman. “By focusing on both, we pass on a ton of value to our clients.”

Cooper, meanwhile, who grew up in Fort Worth, Texas, came to New York after graduating from Southern Methodist University, in Dallas. He worked in the creative services department of Ralph Lauren, helping to design stores and displays while soaking up and squirreling away the design and business acumen required to run a many-sided brand. He joined ASH in 2011.

“Our experience is an ongoing education,” says Cooper. A recent extracurricular highlight was their first official buying trip through Europe this past summer, where they snapped up, among other objects, 60 vintage Marko chairs in the Netherlands for The Dean.

The highlight of the trip was an excursion to the legendary Belgian castle and nearby Kanaal showroom-complex of Axel Vervoordt, the noted interior designer and antiques dealer who famously oversees an enterprise consisting of many complementary arms, including real estate, art gallery and nonprofit operations.

“We don’t have many role models for our business,” says Heckman, citing Candy & Candy, in London, and Vervoordt as two. But they’re “much larger, much grander versions of what we’re doing,” Cooper is quick to add with due humility.

“Unlike other developers, we focus
both on the business side and the actual human experience of inhabiting a space. By focusing on both, we pass on tremendous value to our clients.” 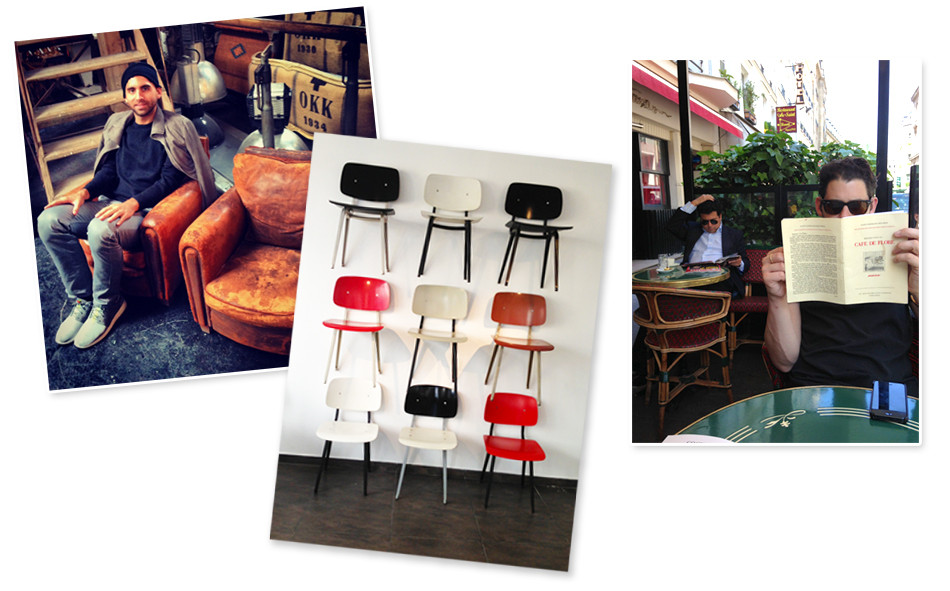 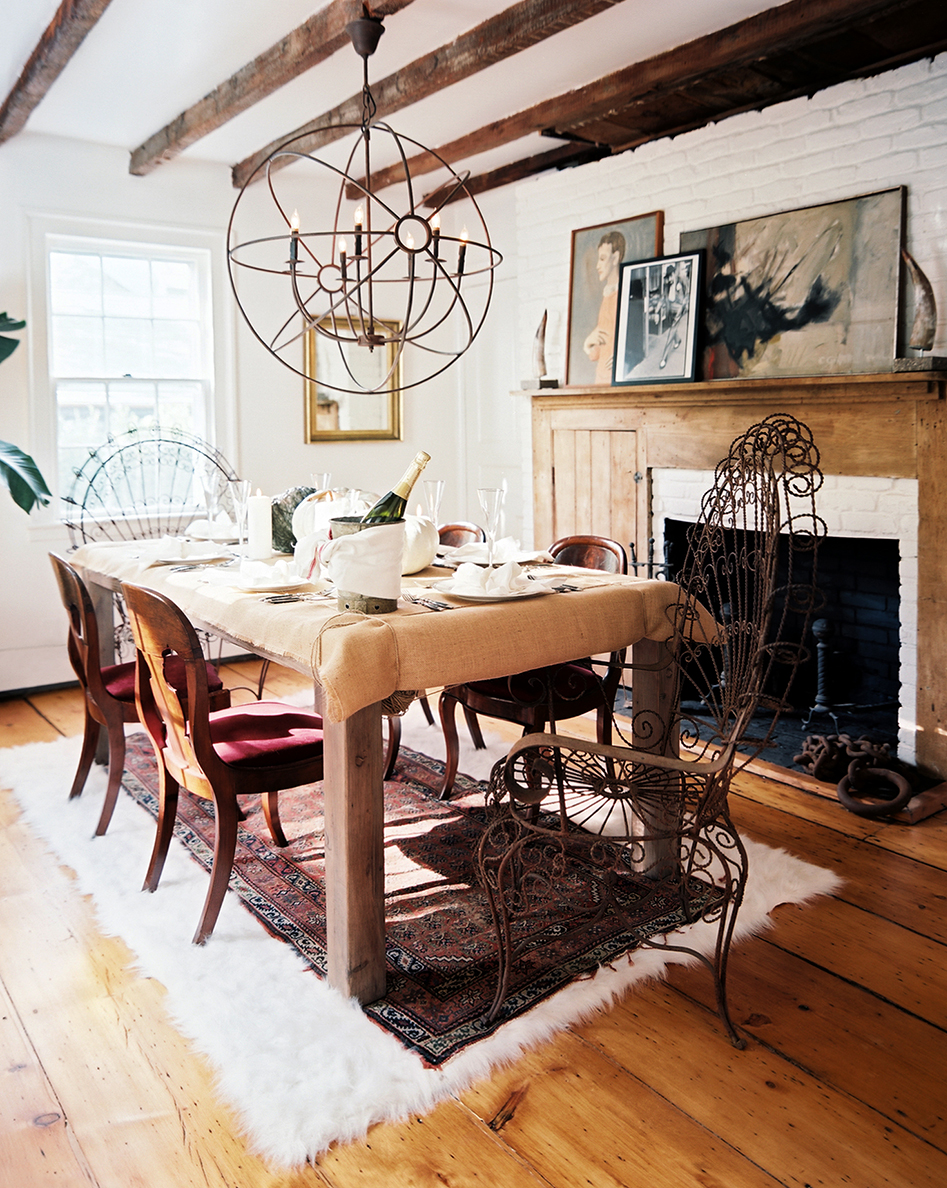 In the dining room of a Sag Harbor house, vintage Regency dining chairs are paired with sculptural metal chairs from Mexico. Photo by Patrick Cline, courtesy of Lonny

The ASH look is often described as “masculine,” and, while it’s not something they especially strive for, it’s not a descriptor they disavow either. At this point, however, ASH is less about a signature aesthetic than a signature approach, which, in short, is a pervasive obsession about every last detail, from the stain of the floor to the finish on the doorknob. They’ll often even furnish residential projects right down to the candles and the soap. When Heckman says it’s these things that keep him up at night, one gets the sense he’s not speaking figuratively.

AH: Growing up in a family of people involved in different aspects of the design and real-estate industries; being told that a “job” isn’t work if it’s something you love doing; learning that no one is stopping you from inventing your own reality. (It’s what we do on a daily basis.)

WC: As a curious kid, noticing each detail in life; rearranging my room until every option was exhausted, perhaps birthing my slight OCD, which is prevalent in every project we work on 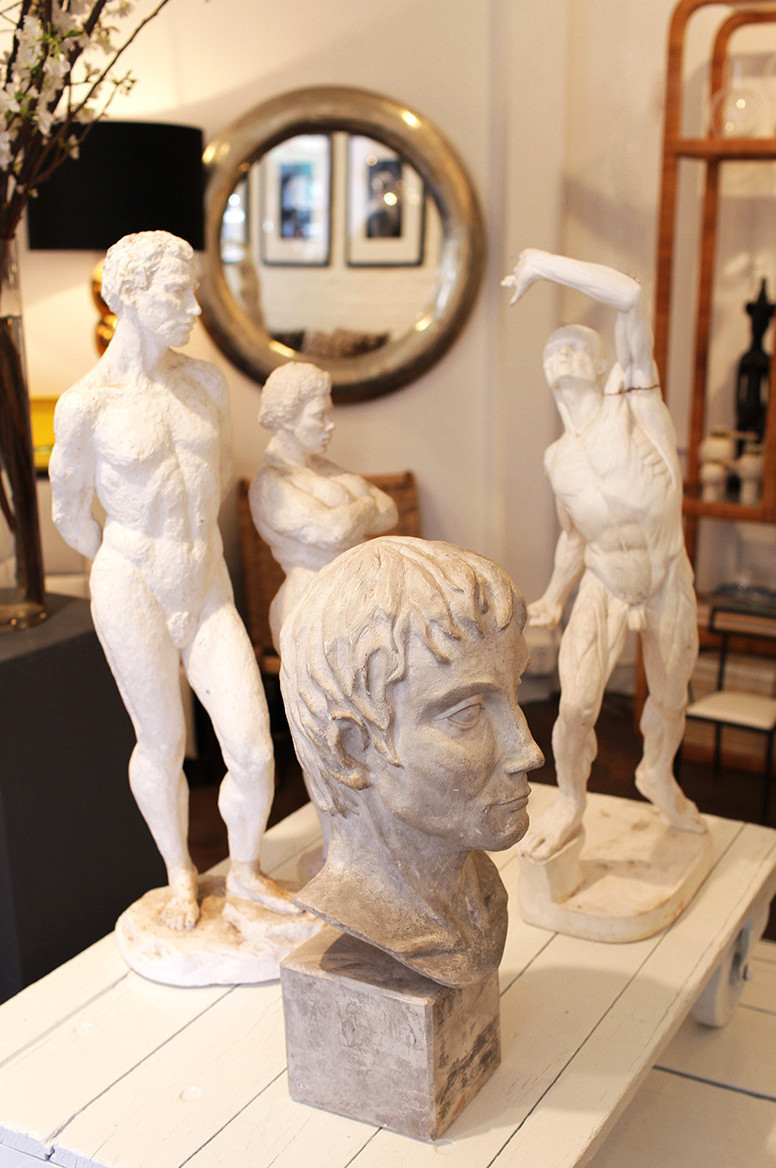 A collection of vintage, mostly French plaster forms and a bust were among the objects on offer last spring at ASH’s West Village pop-up shop, whose items ranged from limited-edition images by fashion photographer Adrian Mesko to furniture by the up-and-coming designer Anna Karlin. Photo by Sascha Pflaeging

AH: Going to the Boston Design Center with my mom and searching for fabrics and wallpapers and observing her collect American and French antiques while learning about style, period and provenance

WC: My dad, with his passion for music and cars; my mom, in her constant search for something greater than herself

AH: Having a series of mentors who empowered me with decisions and projects much beyond my experience; connecting with the “right” people in New York City and elsewhere who have become advocates and cheerleaders

WC: Moving to New York the day after I finished college to work and learn with Ralph Lauren in retail, a priceless education in balancing the creative and business worlds

WC: It starts with a site visit to feel the space. We preserve what we can and take out the rest. We come up with a general concept, feeling, mood. We paint it white, then layer in finds from around the world as they cross our path. We are not traditional in the sense that we plan out every last detail and fabric and fuss all at the beginning. Much is to be said for how a space evolves with time and experiences along the way. This allows for the space to live and breathe forever.

AH: What Will said. 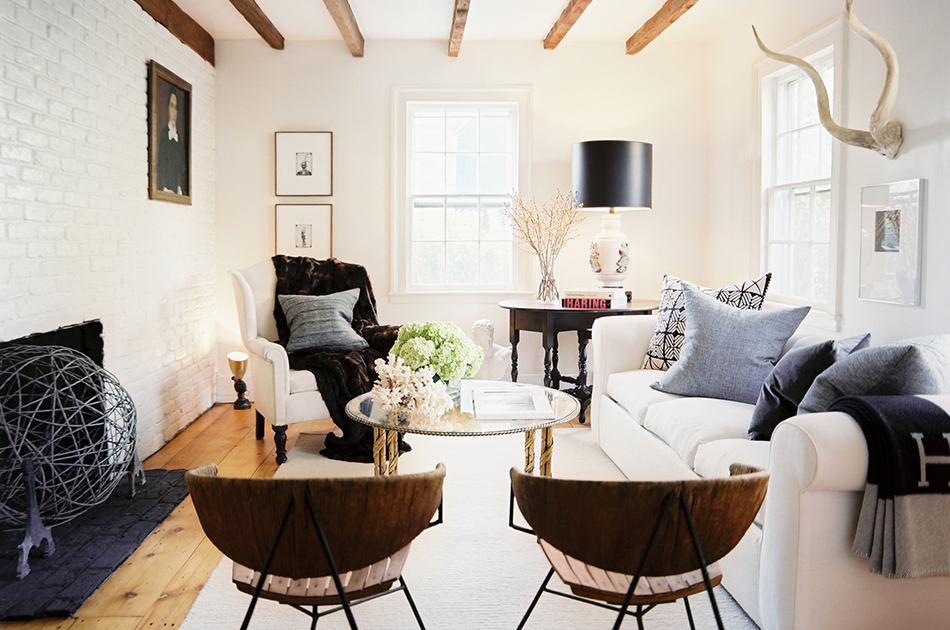 In the living room of the Sag Harbor house, metal-and-rush 1950s chairs by Arthur Umanoff face framed photos by Lyle Owerko on the far wall. Photo by Patrick Cline, courtesy of Lonny 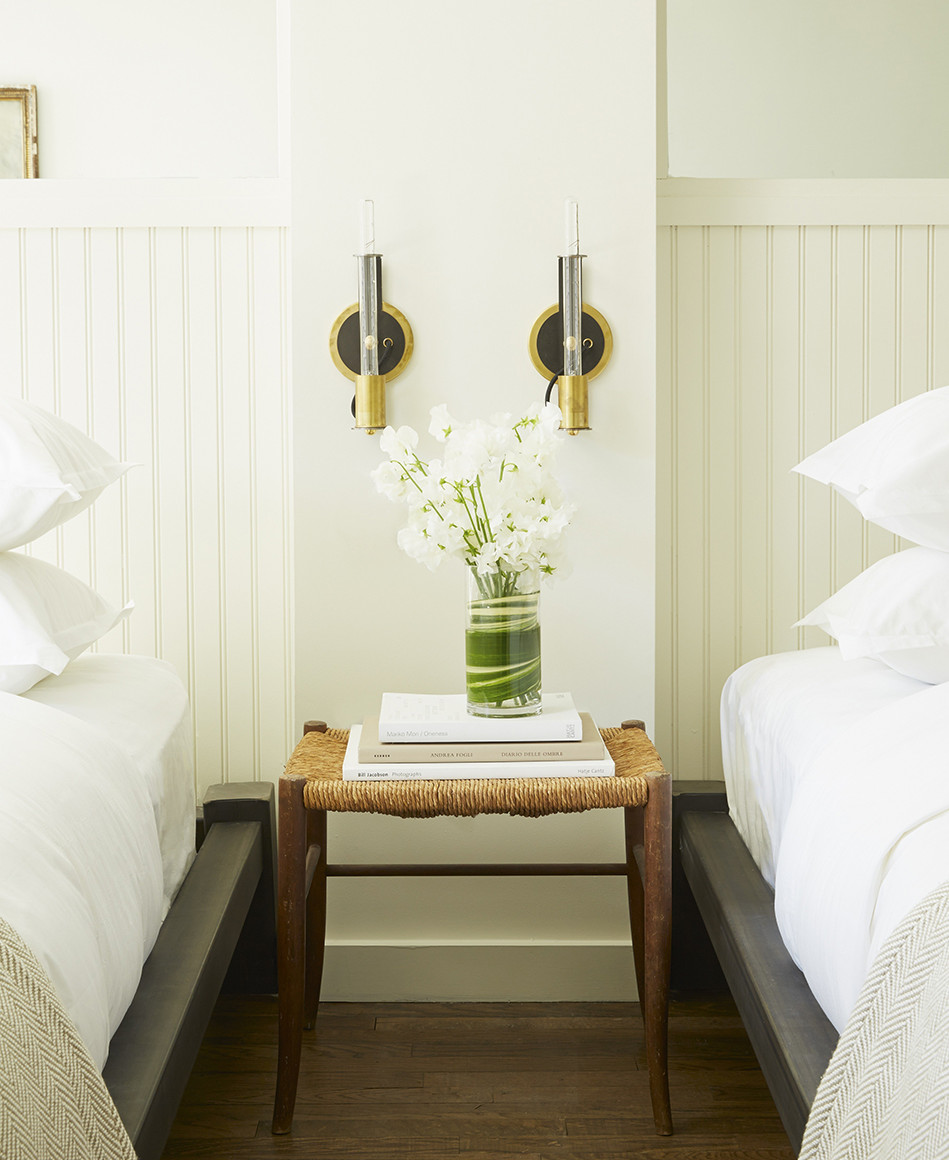 ASH designed all the lighting fixtures in The Dean. The firm is currently at work on a furniture collection that will be available to the public. Photo by Christian Harder