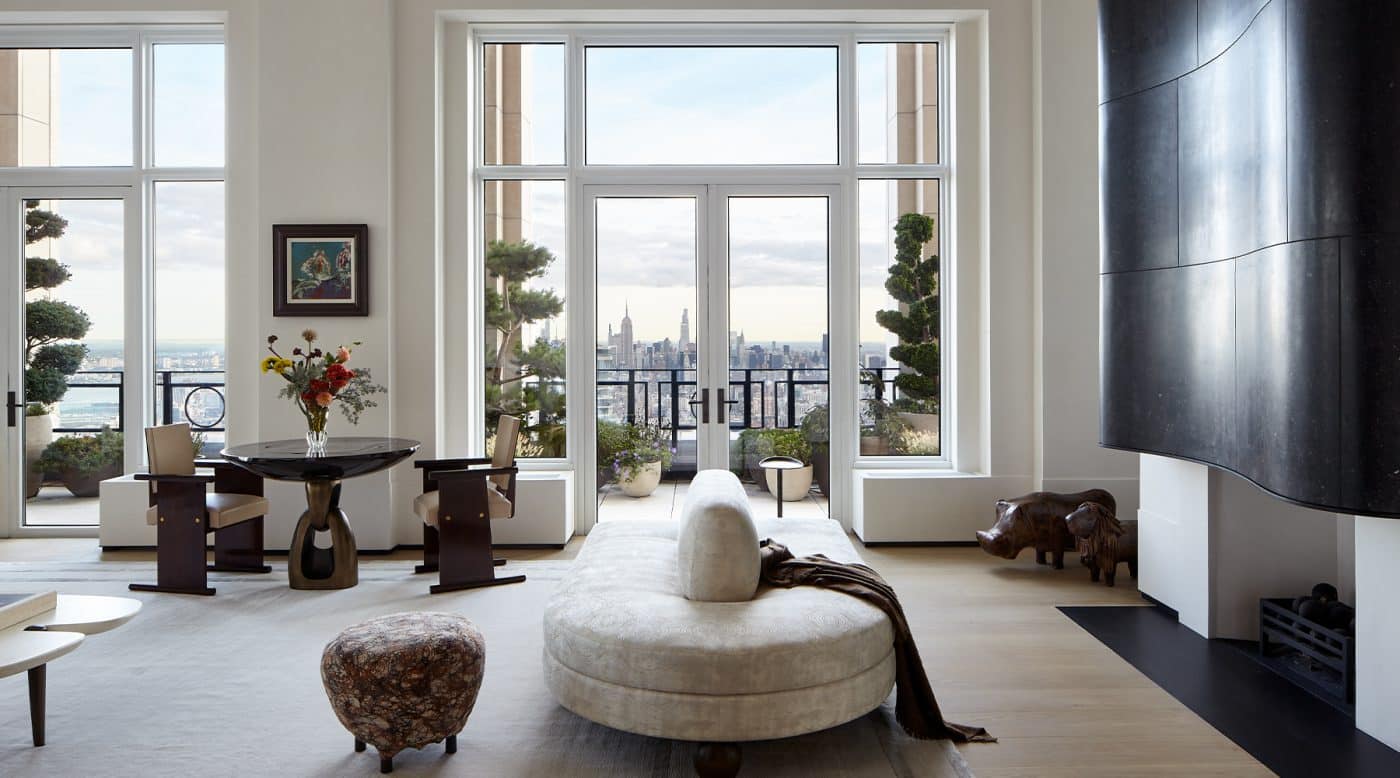 Founder Devin Hines and his talented team made a splash with this project, which highlights their elevated taste and masterful problem-solving skills — not to mention their ability to stick to a tight deadline.

by Fred A. Bernstein photography by Joshua McHugh

January 8, 2023“One of our goals for January is introducing ourselves to the world,” says Devin Hines, referring to Hines Collective, the design firm he founded just over two years ago. “I’m new to running a business,” he adds, “and one of the things I’ve never done is PR.”

Not only is the designer inexperienced at self-promotion, but for a long time, he was too busy to have his projects photographed. That’s because one of those projects was redoing a 6,000-square-foot duplex penthouse in downtown Manhattan at warp speed. The client wanted the whole place — all 25 rooms of it — refurbished in just nine months. “She had nowhere else to go,” Hines explains. So, he and the contractor worked around the clock to satisfy her.

But Hines would never complain about the pressure. “It’s hard to believe we got a chance to do something like this so early in our careers,” the 40-year-old designer says of himself and his small team. “We’re blessed.”

In fact, many established designers would kill for a job that involved not only buying the best of the best (Hervé Van der Straeten, Achille Salvagni) but also commissioning an astonishing number of custom pieces. Hines collaborated with one firm on four églomisé walls for a powder room and with another on a massive steel tree for the owner’s living-room-size closet. Why a tree? Hines explains: “During demolition, a building riser was discovered in the center of the space we planned to turn into the closet. The riser couldn’t be moved. We had about a week to pivot and completely change the closet design to stay on schedule. We came up with some conventional options to conceal the riser in cabinetry and one curveball option, which was to conceal the riser in a tree, which would bring some whimsy to the room and break down the grid of the cabinetry. Our client picked the curveball, one of many reasons why we love her. It was a real lemons-to-lemonade moment.”

True, Hines didn’t have to gut the large apartment. The previous owners had hired the New York–based designer Monique Gibson to upgrade what had been a developer’s white box. Working alongside Gibson, architects from Ike Kligerman Barkley devised a number of permanent improvements, including a system of steel-framed interior window walls that let light pass from one side of the floor-through apartment to the other.

Hines’s client was happy to keep some of those improvements, including the steel staircase leading from the public spaces on the lower level to the more private spaces above, the elegant gray-oak paneling in many of the rooms and a dramatically sculpted fireplace in the living room. But against that backdrop, many things had to change. “Our client’s lifestyle is very different from that of the previous owner,” says Hines, “and that presented opportunities.”

First, they had to modify the layout — making room for several guest suites and the “super closet” on the second floor. To make the corresponding plumbing changes, “we had to open up the entire first-floor ceiling,” he recalls. Then came the frenzy of decorating. The vintage pieces were no problem, schedule-wise, since most were ordered from 1stDibs. But getting the custom work done in time took organization, persistence and luck.

The living room demonstrates what Hines Collective can do. They designed a two-sided sofa, allowing guests to choose whether to face toward or away from the fireplace. And after buying a vintage carved-oak settee by Guillerme et Chambron from MORENTZ, they had the upholstery modified because, with its original cushions, the piece’s latticework construction was visible only from behind. The game table was made to order by the French company R&Y Augousti and its chairs sourced from Bernd Goeckler Antiques. The four-leaf clover coffee table from DeMuro Das has bronze legs and a top of Ivory Carta, a paper-based veneer reminiscent of parchment.

At the end of the living room, what had been a nook with banquette seating became a home office. Its focus is a limited-edition marble desk from Francesco Balzano via Kolkhoze gallery. The cast-bronze stools from Bourgeois Boheme are upholstered in Italian leather. The brass and parchment chandelier was custom-made by Diego Mardegan for Galerie Glustin Luminaires.

The den, a darker and more dramatic space next to the living room, is dominated by a Pierre Dunand lacquer and gilt “painting.” Hines made the triangular side table from marble left over from construction of the apartment’s wet bar and had a vintage Pierre Paulin Groovy armchair, another 1stDibs find, upholstered in a Pierre Frey mohair. The highly articulated sectional sofa is custom, as is the jacquard-covered window seat. The fixtures above the window seat had hung over a desk in the apartment’s past life; Hines had them shortened to provide more headroom.

The dining room, on the other side of the staircase from the living room, accommodates eight sturdy chairs from the client’s last apartment and a table designed by Hines to go with them. The client has a fondness for birds, so the decorator created a tabletop with inlaid avian figures that extrude down to become the table’s sculptural legs. Bronze early-1900s French heron sculptures — more birds! — are from Pittet Architecturals. The windows were left bare — up around the 80th floor there’s no great need for privacy. But to soften views of the strictly geometric metal stair, Hines hung flowing drapes from interior glass partitions.

The designer may have packed the biggest punch into the smallest room. Deciding how to make the powder room pop, Hines thought of églomisé, the technique of coating the back of glass panels with gold or silver leaf. He asked the client to suggest a theme, and she told him that dragons had personal meaning for her. Hines collaborated with Noemi Kozikowska, a Polish-born artist living in Canada, to come up with a design that wrapped a dragon around all four walls. “We wanted to keep the dragon elegant, not cartoony and not scary,” says Hines, who had the panels made by Agency Custom. Even the smallest piece in the smallest room mattered to him: The tiny bronze table is by Hervé Van der Straeten via Maison Gerard.

The stair landing was another place for the firm to exercise its problem-solving skills. The stairwell had contained a large chandelier; Hines replaced it with a pair of 13-foot-high custom, vine-like sconces. “Now we’re framing and complementing it without blocking it,” he says of the Lower Manhattan vista, which includes the top of Herzog and de Meuron’s “Jenga” tower, at 56 Leonard Street.

The client wanted different rooms to convey different feelings. She envisioned the media room as a dark and moody place or, as she pitched it to Hines, a “vampire speakeasy.” He chose an oxblood (emphasis on “blood”) colored velvet to cover the windows and then extended it across the ceiling, so it sort of drips down like you-know-what. The ceiling fixture with pleated silk shades is by Aqua Creations. The walls are lacquered, and the bar has a hand-applied finish that’s meant to look like hammered gold. Hines cut down a vintage wool and silk area rug by Doris Leslie Blau so that it fit wall-to-wall, serving as a platform for a custom sectional sofa and oak coffee table with walnut inlay.

The primary bedroom couldn’t be more different from the eerie media room. “We wanted to keep it light and simple,” Hines says. The wall behind the bed is another example of églomisé but this time with an abstract, airy feeling. Vintage crane sconces, of bronze and alabaster, are from Cache via 1stDibs. The modest Pinocchio floor lamp is by Achille Salvagni via Maison Gerard.

There are no junk rooms, no unfinished storage spaces in this sprawling home. The owner’s closet is a city of cabinets, some finished in hand-applied plaster with bronze trim and some (for shoes and handbags) with transparent fronts and fluted bronze-glass backs. Underfoot, a custom hand-knotted silk rug. Overhead, a double pendant in brass with blown glass shades by Magic Circus from Galerie Philia. But the biggest surprise may be the tree. It was designed by Hines and fabricated by NatureMaker so that some of its large roots lift a pair of leather-covered boxes off the floor, allowing one to serve as a bench, the other as a small counter.

Hines, who was born in Baltimore, studied architecture at Tulane University and then moved to New York. He spent six years working for glass artist James Carpenter and nine years for master interior designer Vicente Wolf. Now, he and his team are designing several Manhattan apartments, two houses in Connecticut and a ground-up house in Florida. Plus, they are the store designer for the luxury mattress and furniture brand Saatva, which plans to open eight more locations around the country by the end of 2023. So, how does Hines feel after just two years on his own? “I can’t believe how lucky I’ve been.” 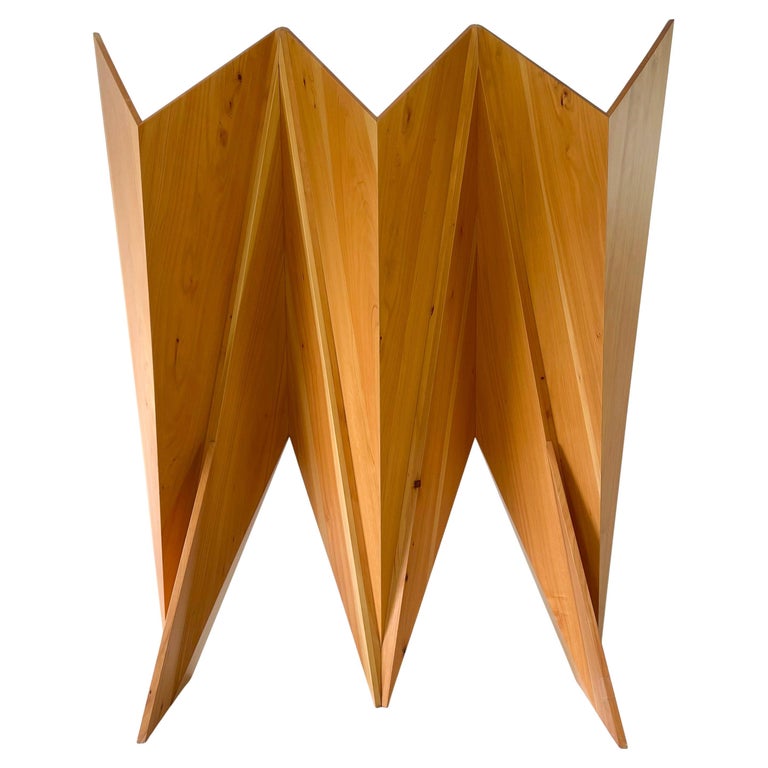 “This screen is functional sculpture — a piece of art that layers, divides or stands alone. Versatile and striking.” 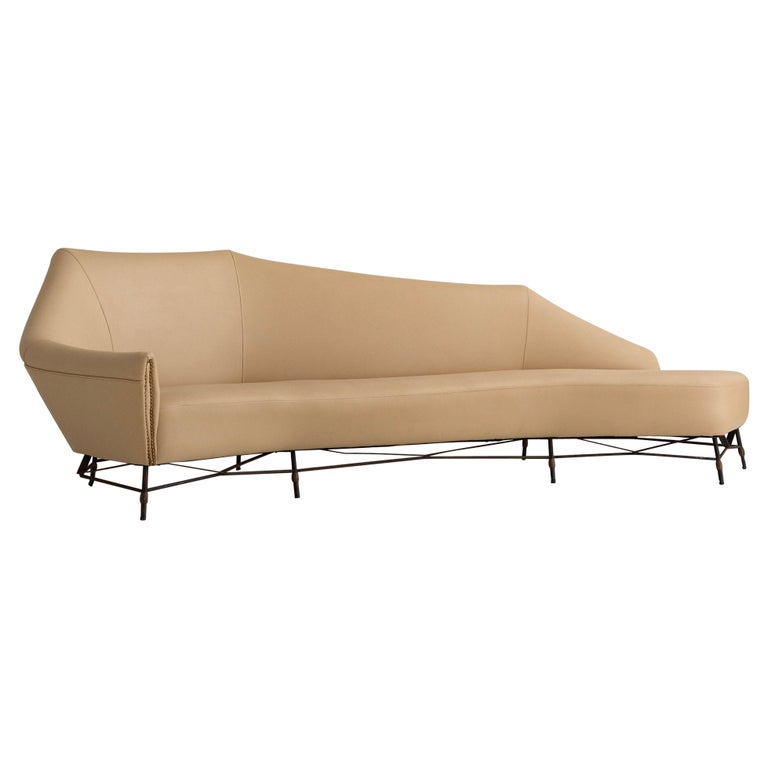 “Curved upholstery dominated in 2022, and the angles of this chaise feel like a fresh direction for the new year.” 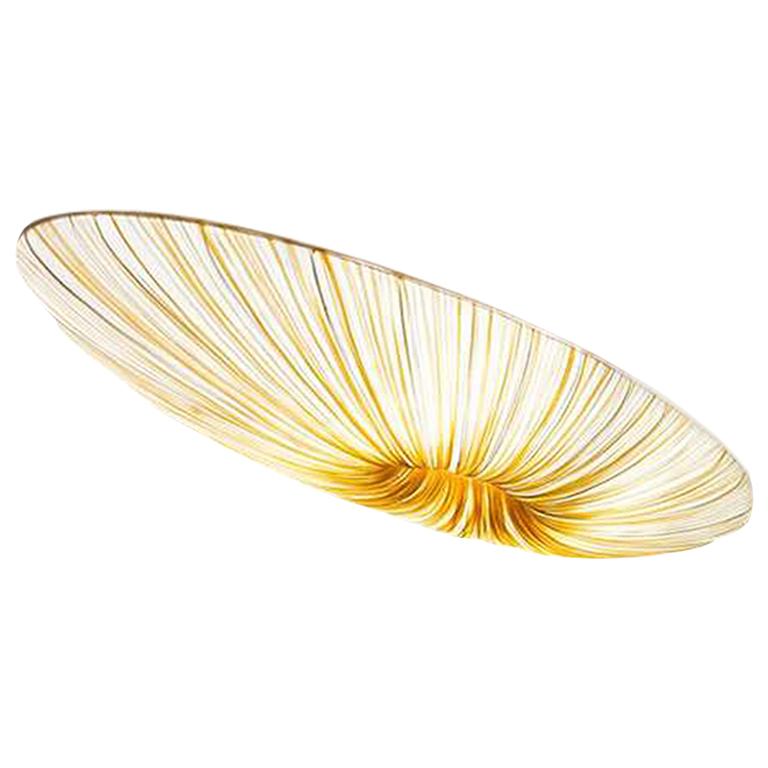 “Fixtures by Aqua Creations bring a softness through form and light to any room. We love the monumental scale of this flush mount.” 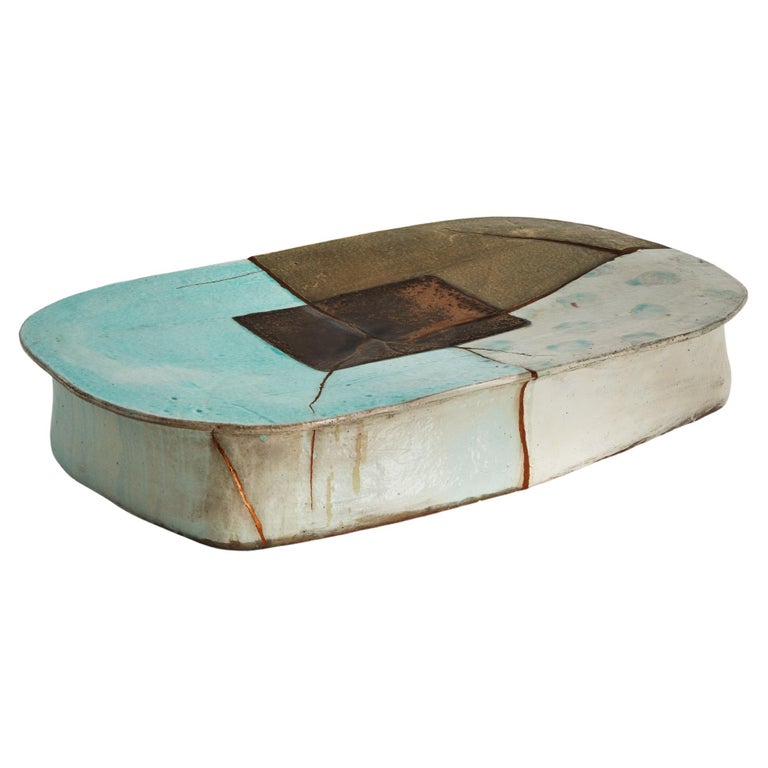 “Art can be present throughout a room in all forms, exemplified by the unexpected medium choice in this glazed-ceramic coffee table.” 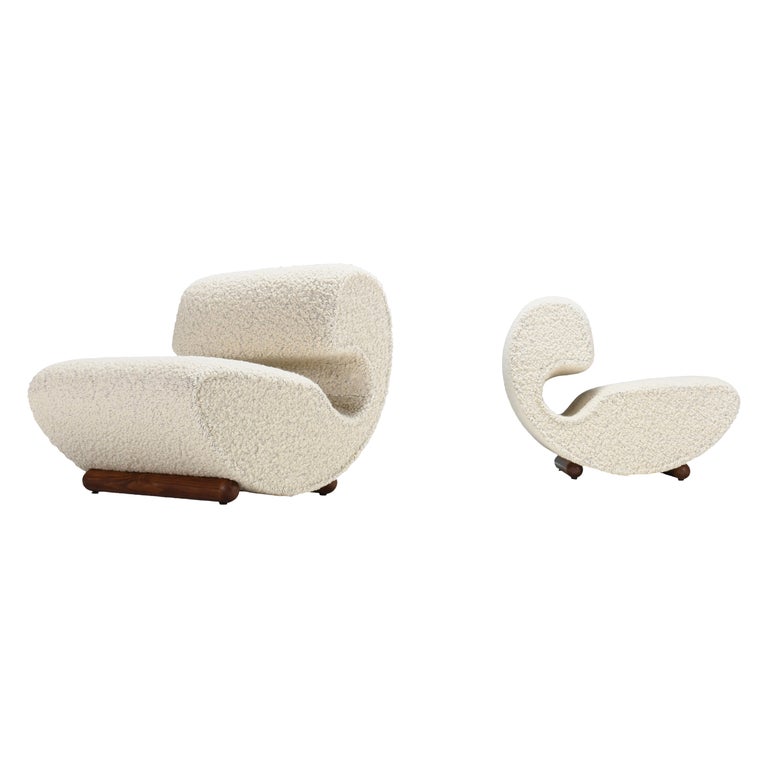 “We love a chair that is captivating from all angles without sacrificing comfort. This pair is bold yet nuanced and inviting.” 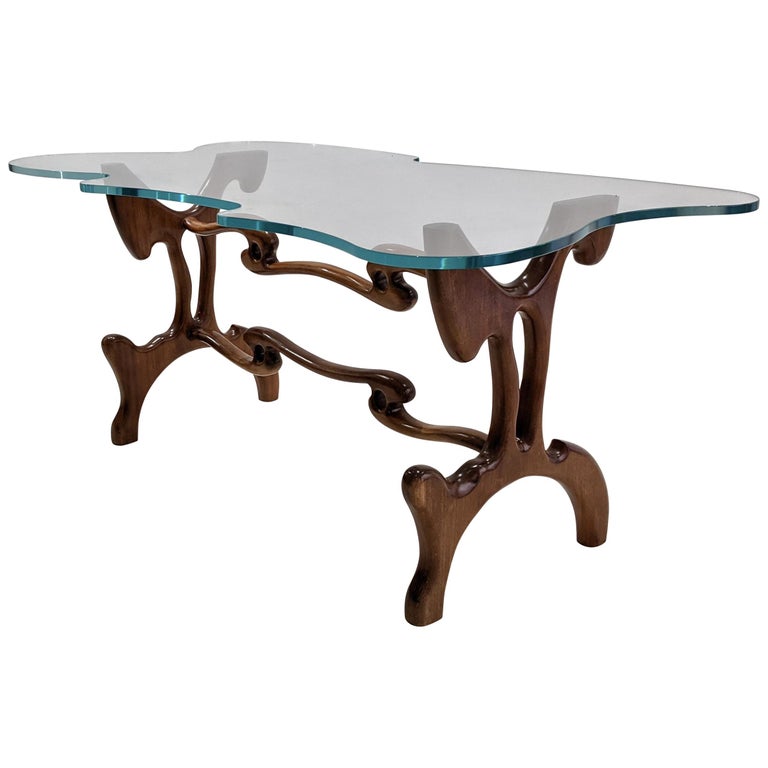 “Timeless craftsmanship makes this a real showpiece. It’s exciting when something asks you to consider, ‘How did they make that?’ “