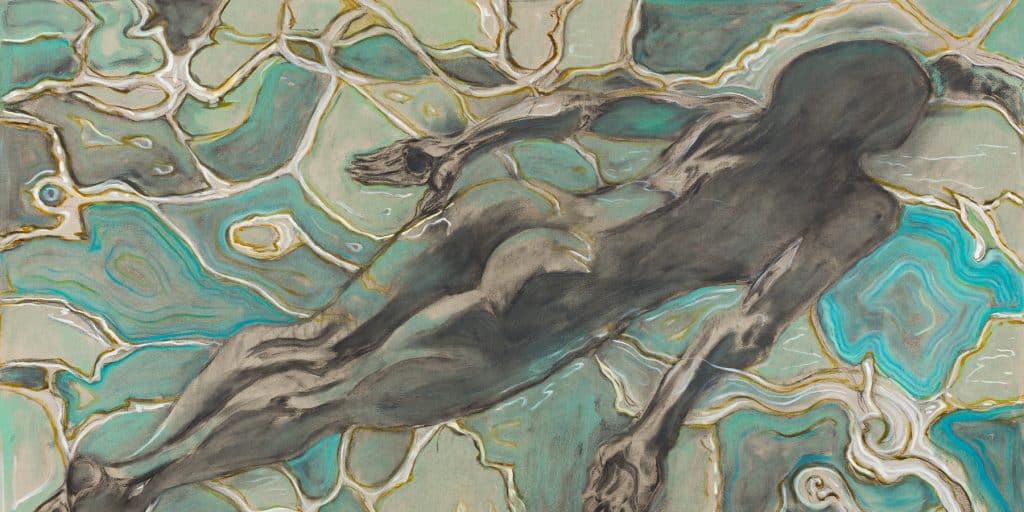 From punk rock to poetry, the talented Brit channels his creative energy into a wide range of genres.

February 9, 2020The British artist and performer Billy Childish is a one-man torrent of unselfconscious expression, producing creative works in many different fields at once — poetry, music, painting, photography, film and probably ones that we don’t know about — and not worrying much about reactions or reviews. He finishes the thing, then he moves onto the next one.

Childish, who sports a seriously bushy mustache, had a show of nine paintings, poetically titled “remember all the / high and exalted things / remember all the low / and broken things,” at Lehmann Maupin’s West 22nd Street gallery in Manhattan in early 2020.

Rendered with figural brio in charcoal and oil on linen, the artist’s works have a cool palette of greens and blues along with a mustard color. Several of them depict a female figure swimming, and the shimmering, wavy lines used to delineate the shapes suggest a journey deep into the mind as much as a dip in the water.

Childish’s brushwork strongly recalls the thick strokes of Edvard Munch, Vincent van Gogh and Paul Gauguin, and the style and subject are decidedly unhip. That is perhaps surprising, given that Childish — who has made dozens of albums in different genres, while also publishing 40 volumes of poetry — was involved in the beginning of punk rock.

Painting has been a constant in his life, starting in childhood and extending through two stints at London’s famous St. Martin’s School of Art, where he met friends like Peter Doig and, after he was expelled for his wild-child behavior, Tracey Emin. For a hot second (January 1999 to June 2001), Childish was associated with the pro-figuration movement Stuckism, which he helped invent and eventually left.

Billy Childish on His Work

From his studio in an old dockyard in North Kent, England, Childish talked with 1stDibs about his unique process and attitude toward creation. But beware: As he puts it, “I’m apt to make flippant, throwaway comments. It’s my style.”

How much of your brain is apportioned to music these days versus art?

Just today, I’ve been messing around with music. I wrote a riff to a song, I said to my wife, “Ah, screw it,” and I just recorded it before I forgot it.

I suddenly started doing about four albums in the last month or two.

The only reason that it all happened was because I was one of the only punk rockers in town in ’77. And some fellow said, “Would you like to sing in a group?” Despite all lack of musical ability, I was sort of like, “Yeah, you bet!” And so it’s all punk rock’s fault.

The works in the Lehmann Maupin show have a strong sense of Edvard Munch and other painters from a century ago. What are your influences, and how far back does your art making go?

I’m not one for gimmicks or reinventing wheels. Of course, Munch, he’s a high point of modernism and free expression. I was exposed to these people when I was really young. Making paintings goes back to what I can first remember. It’s something I was included in and considered good at. I could always make pictures, and that’s what I’ve always done.

You saw the great painters in museums?

Not when I was a kid. I didn’t get to museums, but we had art books in the house, and I’ve still got books from that period. My parents were both interested in art, and so was my older brother. My father painted, and I used to have to pose for my brother when I was a kid. I was looking at Andy Warhol and Francis Bacon and all of these people when I was about nine or ten.

How fast do you do your paintings?

In about four hours. Those paintings in the show were completed in one sitting, very fast, and there’s no preliminary sketching, which is typical of all my work. But I always say to people, it’s forty years, [it’s] four hours — how long does it take to do a heart surgery? Well, if you know how to do it, it’s a lot quicker. But the thing is, there’s no planning, and all of it is an emotional release in a sense.

My job is to make a picture, and my job is to do what the picture requires, and that means that there’s no ego attachment or, in effect, any involvement of “me” at all. And the less of my involvement there is, the easier it goes. If I try to get involved, then there’ll be all sorts of chaos. It’s complete free flow. The dream world made manifest. They paint themselves. 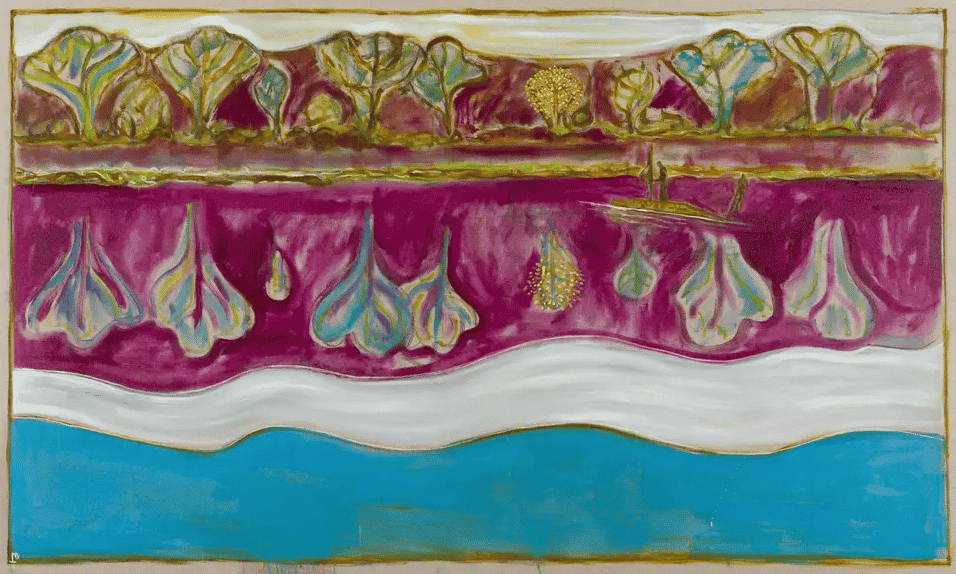 Browse Works by Billy Childish on 1stDibs
Shop All