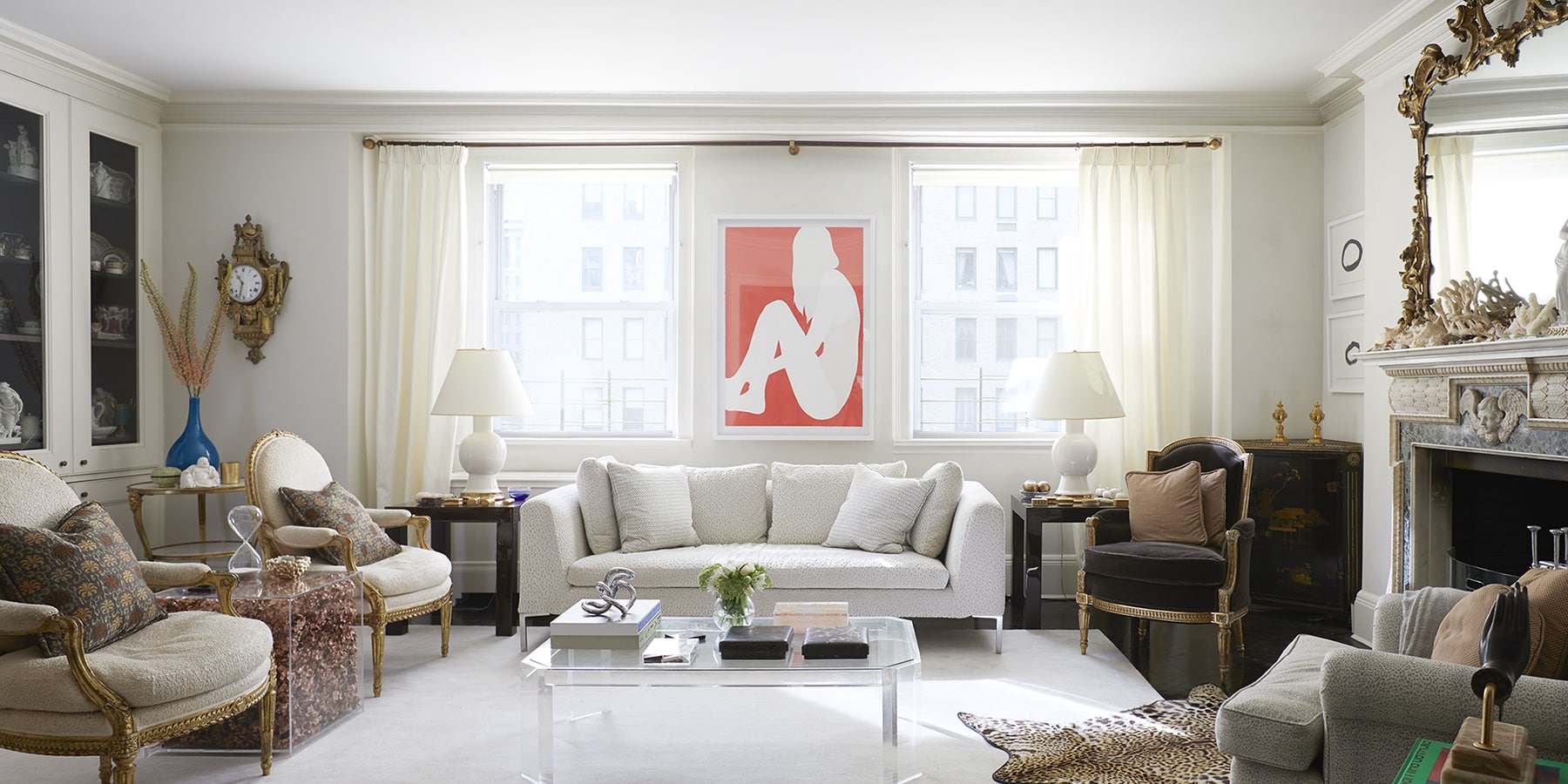 The dealer of contemporary art that's both adventurous and appealing opens the doors of the the New York apartment she shares with her antiquaire husband and their two young daughters. 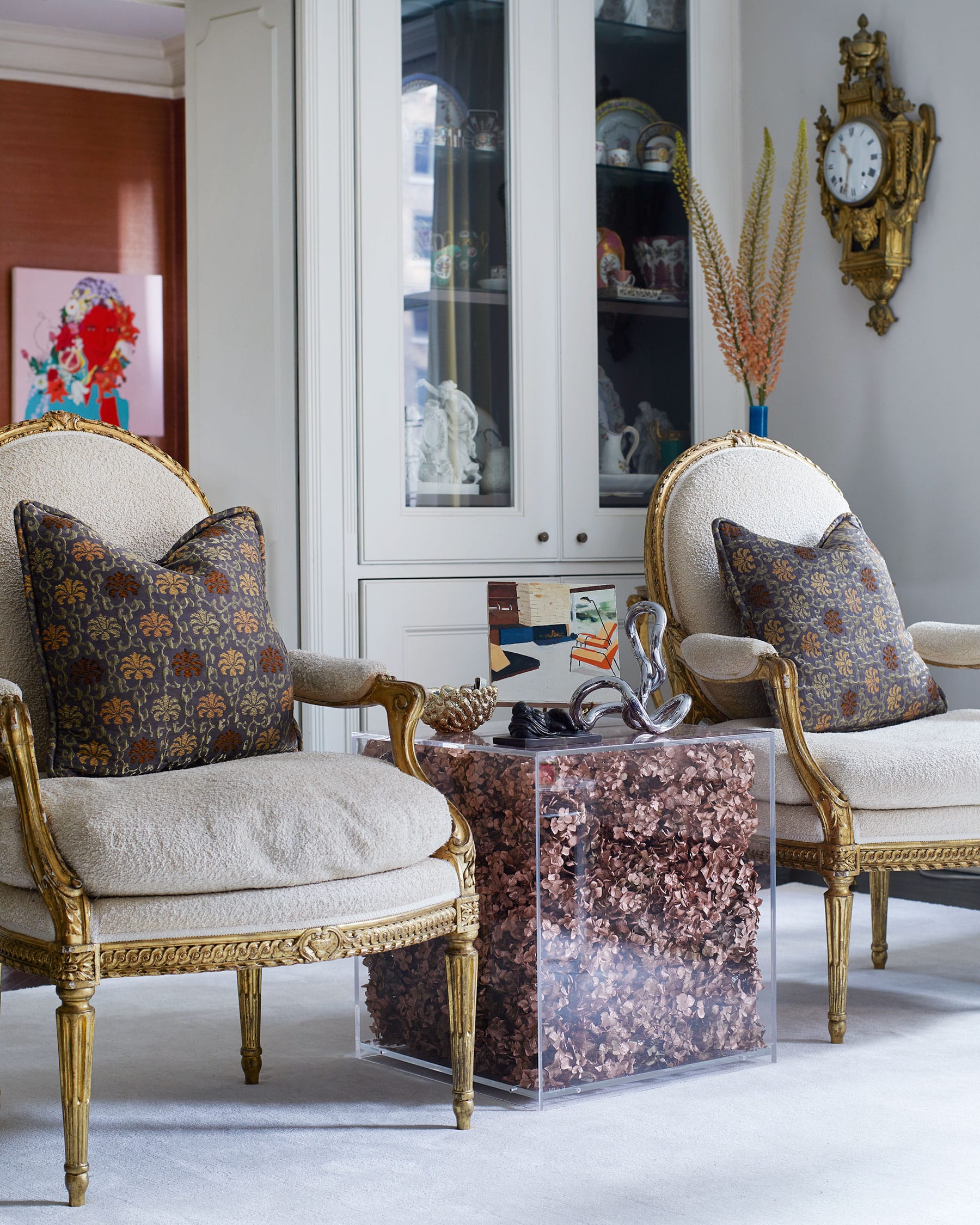 Blair and Alistair Clarke are proof that opposites really do attract. A Southern belle from Georgia, she’s an art adviser and gallerist, representing contemporary talents who make bold, splashy works with an edge. He’s a dapper Brit who is a respected expert on 18th-century antiques; the former head of English and European furniture for Sotheby’s, he’s obsessed with Sèvres porcelain, among other covetable collectibles. Their theme music could well be Gershwin’s Let’s Call the Whole Thing Off (“You like tomato and I like tomahto”). Yet for this über-creative New York–based couple, the whole thing works. Their three-bedroom Manhattan apartment, which they share with their daughters, Poppy and Georgina, and a frisky cockapoo, is the perfect expression of their wildly divergent yet thoroughly impeccable tastes.

In the entry, for example, a vivid painting by the young Spanish artist Gemma Gené depicting a laundry detergent container is juxtaposed with a 17th-century Italian marble bust of a Roman emperor, while in the living room a ribbon-like metal sculpture by Jacinto Moros, another Spanish artist, provides a lyrical counterpoint to a carved-giltwood George II mirror above the fireplace. 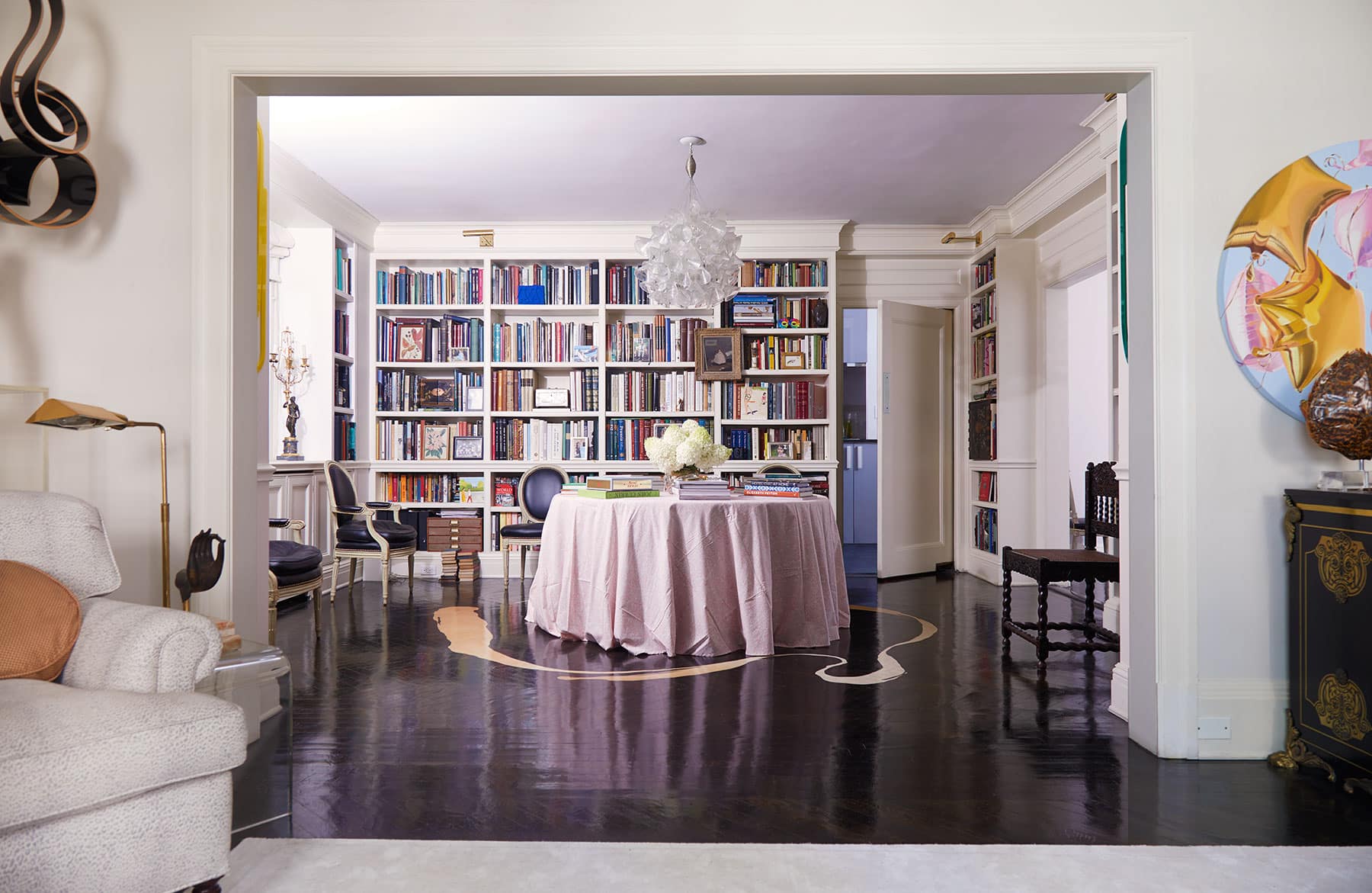 Artworks by Jacinto Moros (left) and Gemma Gené flank the opening to the library, where a skirted center table hides one of Blair’s daughter’s American Girl dolls. Surrounding the table is a masking-tape floor installation by artist Sun Kwak. The fixture above is a Michael Marra Chandelini. To the left of the table are Louis XVI dining chairs and, to the right, an ebony Indo-Portuguese side chair from the late 17th century. The painting at the far right is Gemma Gené’s Happy Birthday To Me, 2017. 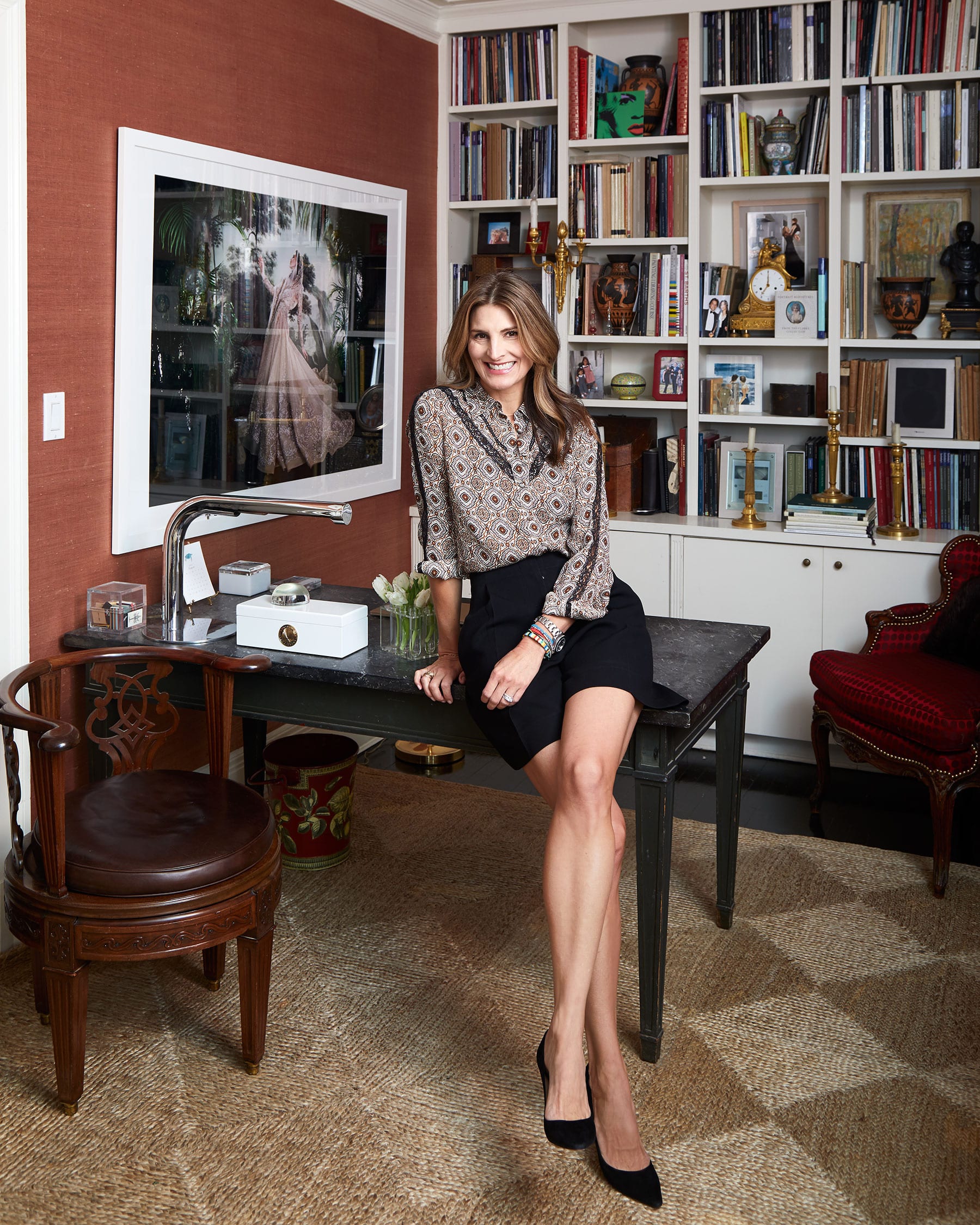 “I like to be loyal to and challenged by difficult art — works that are more conceptual but also visually appealing,” says Blair. “I’m very comfortable with art making you happy.” The chair at left is Louis XVI, the one at right a walnut Louis XV bergere.

“When we first moved into the apartment, we were newly married, and it was a collaborative experience, with Alistair’s having a say on a piece of furniture and my coming up with a work by a new contemporary artist I had just discovered,” Blair recalls. “But it also felt like we were in battle — it was Alistair’s antiques against my artworks. I think we’ve both softened with age.”

To ensure harmonious interiors, the couple abides by a few design rules. “When something new comes in, something has to go,” Alistair explains. (The cupboards, it should be noted, are crammed with his French porcelain, Japanese lacquer and gilt bronzes.) And there can’t be too much furniture. “From a decorative point of view, for contemporary art to be effective, it has to be big,” says Alistair. “If you’re trying to do that, you can’t have too many large pieces of furniture — there just has to be enough to set the mood.”

Fifteen years ago, when the couple bought the apartment —  in an elegant 1920s building designed by Dwight P. Robinson — they performed a gut renovation that included restoring the original hardwood floors, hidden beneath linoleum, and removing walls to create an open living-dining area. They skipped a more formal dining room — “waste of space,” says Alistair — in favor of a library packed with his decorative-arts reference books. (“Alistair always jokes, ‘If I ever get hit by a bus, don’t give away my books — they’re worth a fortune,’ ” Blair says with a smile.) The library’s furnishings include a center table that hides a daughter’s American Girl dolls behind its skirted tablecloth and is encircled with a whimsical floor installation, constructed of masking tape, by the Korean-born New York–based artist Sun Kwak. 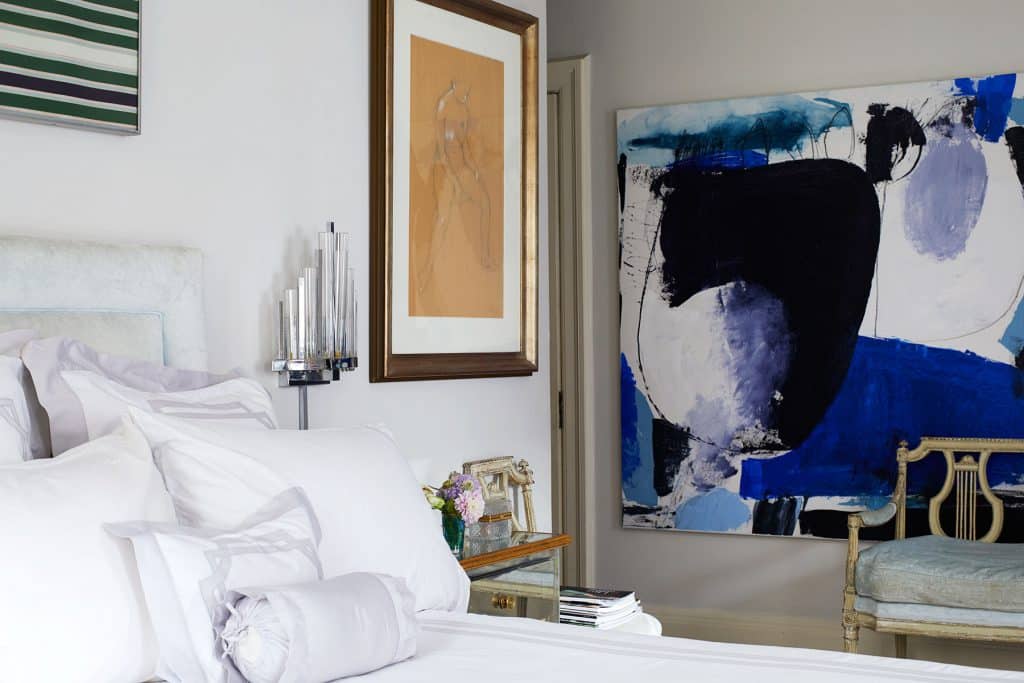 In the master bedroom, Haidee Becker’s drawing Waiting — a gift Blair and Alistair received for their wedding — hangs next to Heather Chontos’s painting Usett, 2017. 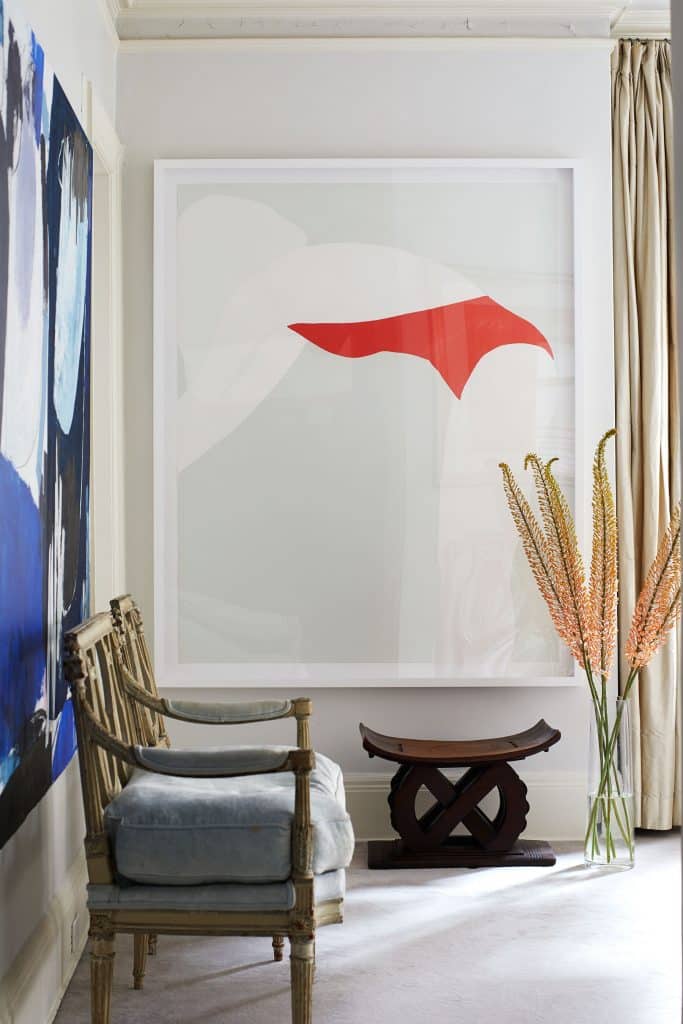 Kitty-corner to the Chontos work is Natasha Law‘s Reaching in Red, 2017. The pieces hang above a Louis XVI marquise and an Ashanti stool. 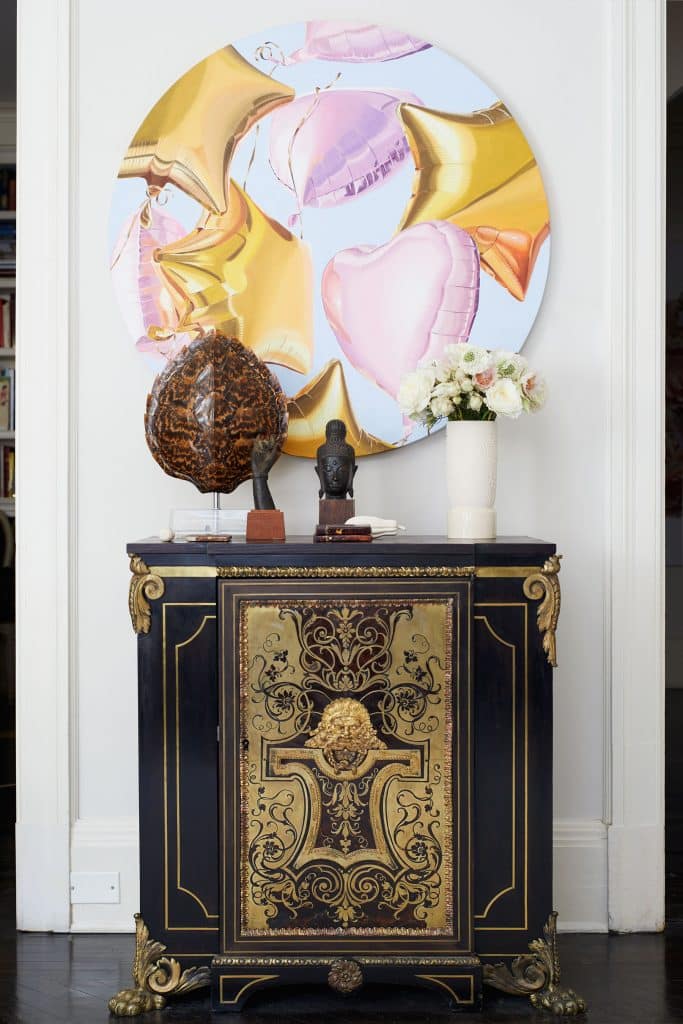 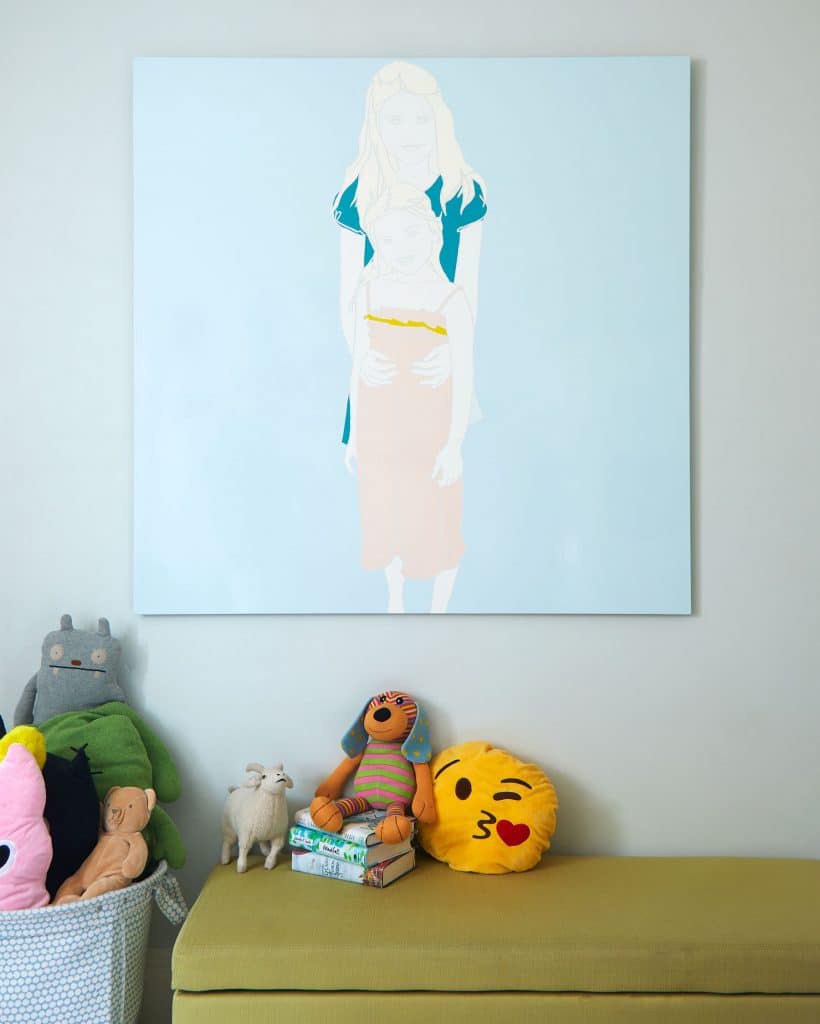 Law’s 2015 Sisters, a portrait that Blair and Alistair commissioned of their daughters, hangs in the girls’ room. 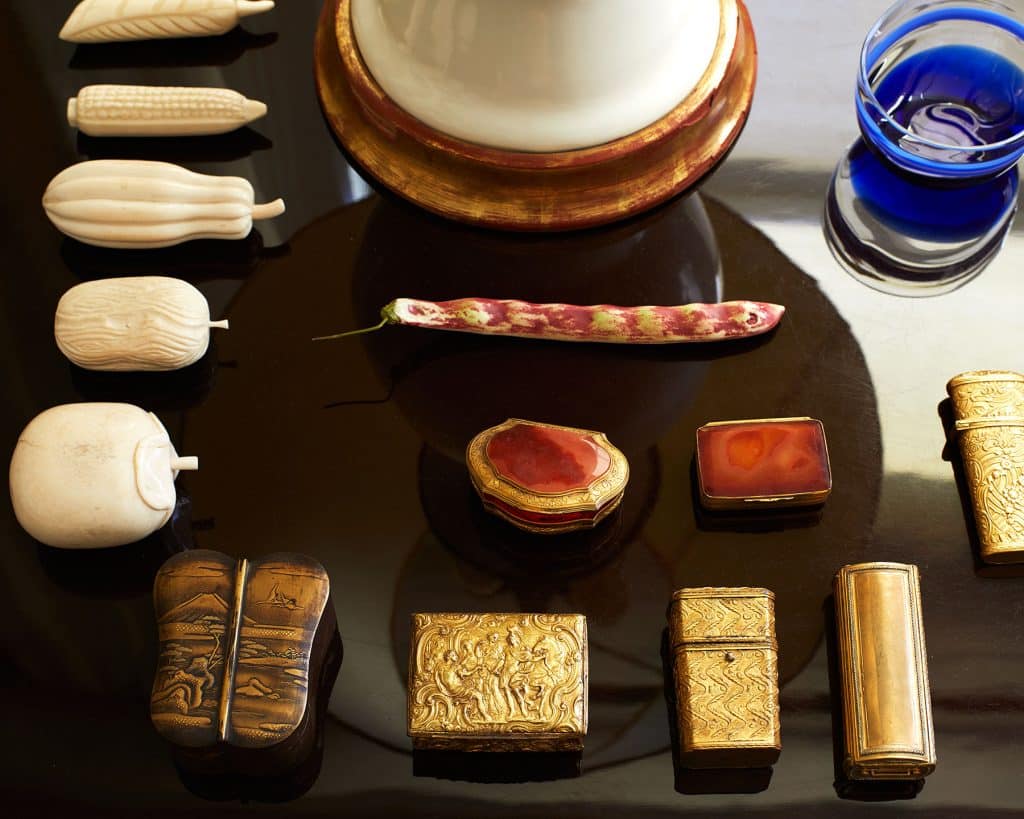 Blair and Alistair’s collection of antique boxes — including a grouping of 18th-century English ormolu examples — surrounds a table lamp in the living room. 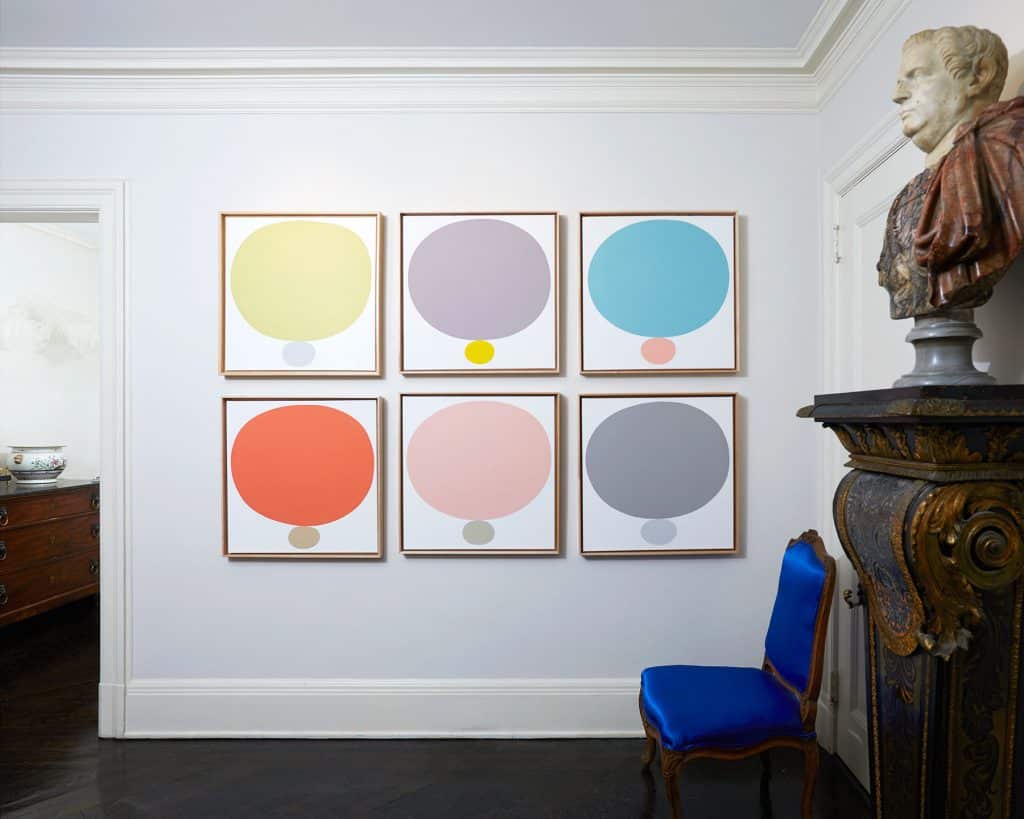 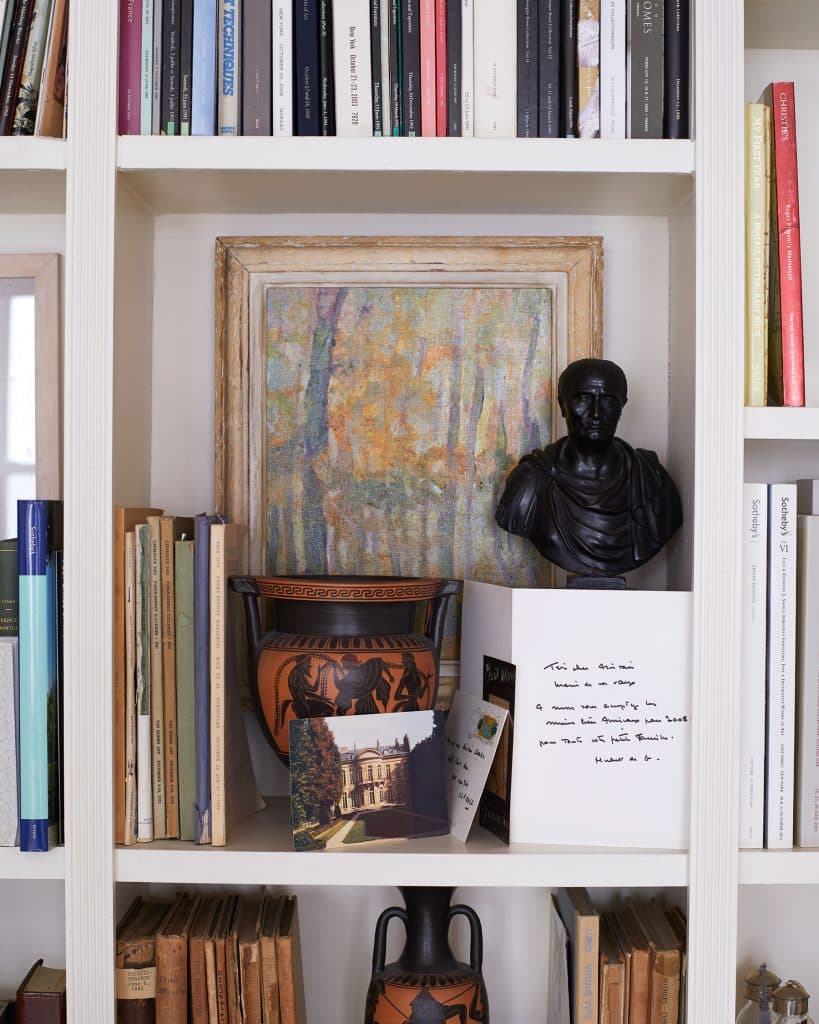 About his collection of design books, Alistair has quipped: “If I ever get hit by a bus, don’t give away my books — they’re worth a fortune.” 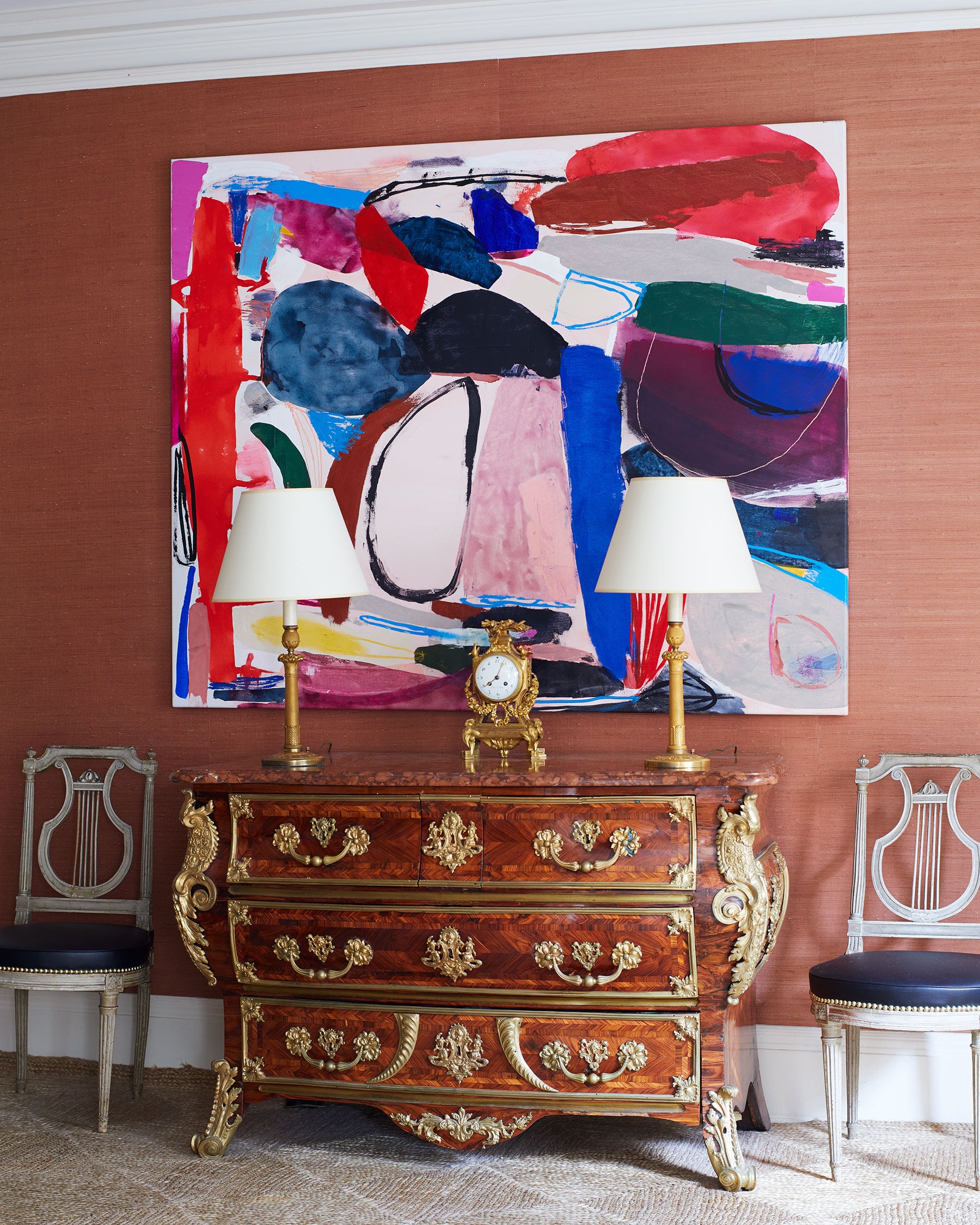 From an early age, Blair knew she would be involved in the arts. She majored in art history at the University of Georgia and figured she would go on to graduate school or attend one of the New York auction-house art programs. Instead, she took a job at Tew Galleries, in Atlanta. Under the tutelage of dealer Timothy Tew, she recalls, “I learned everything about working in a gallery. The art world is evolving and changing every day, and I don’t think textbooks could do me any better than hands-on experience.”

When she launched Voltz Clarke, her art advisory business, in 2003, Blair introduced her American clientele to a number of young foreign artists. Among these were Natasha Law (actor Jude Law’s sister), whose sparely chic silhouettes have since been featured in Vogue as well as in Max Mara and Tiffany & Co. advertisements, and Moros, whose rhythmic sculptures have been exhibited at the New Museum and the Smithsonian Institute. Blair has also partnered with fashion houses, hotels and design firms to exhibit works by her artists.

“Even though our artists work in so many different mediums, there is a common denominator for me,” Blair says. “I like to be loyal to and challenged by difficult art — works that are more conceptual but also visually appealing. I’m very comfortable with art making you happy.” 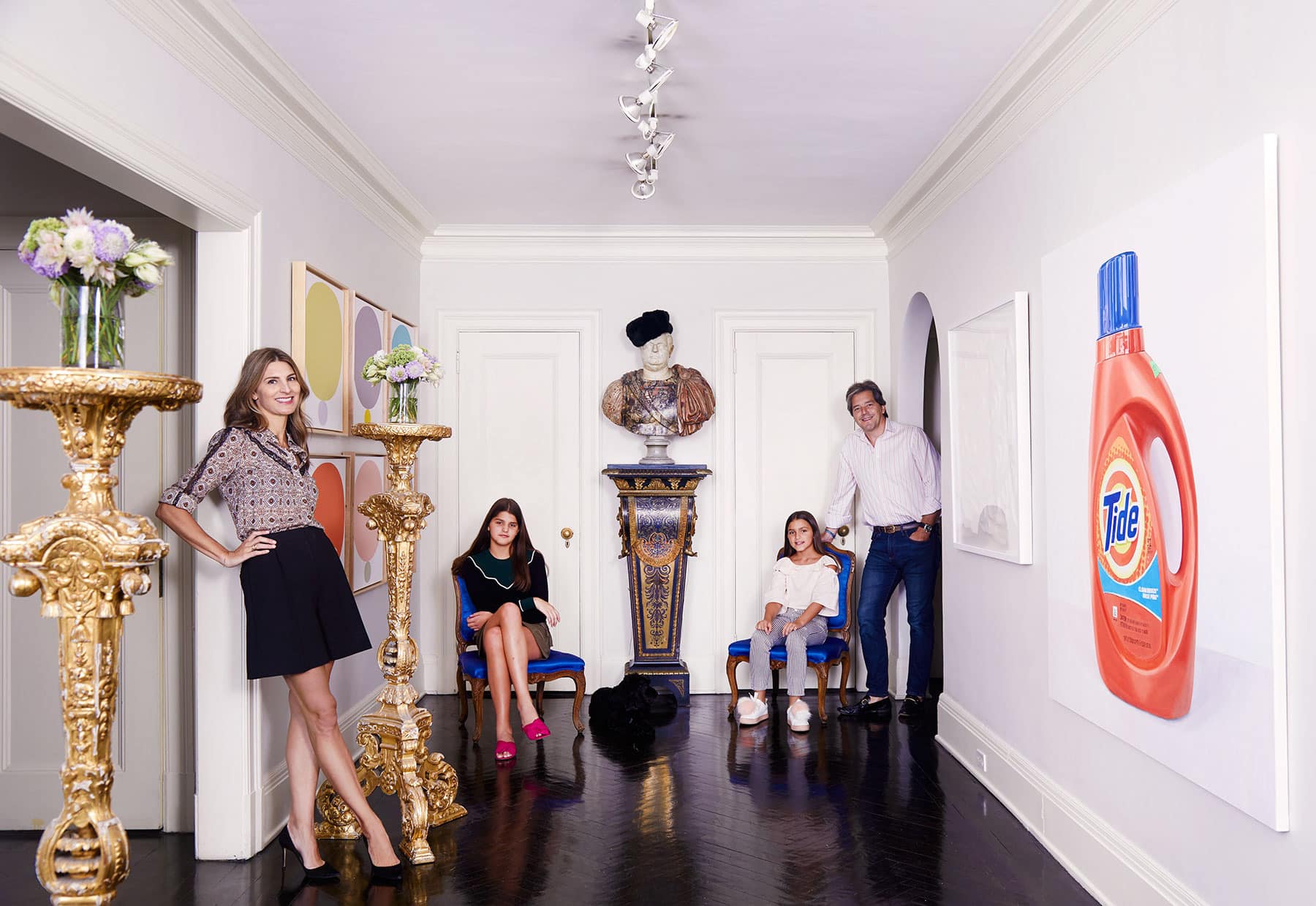 Blair shares her home with her British-born husband, Alistair Clarke — an expert on 18th-century antiques and the former head of English and European furniture for Sotheby’s — and their two daughters. She describes decorating the apartment as “a collaborative experience, with Alistair’s having a say on a piece of furniture and my coming up with a work by a new contemporary artist.” At the far right is Gené’s Tide, 2018. 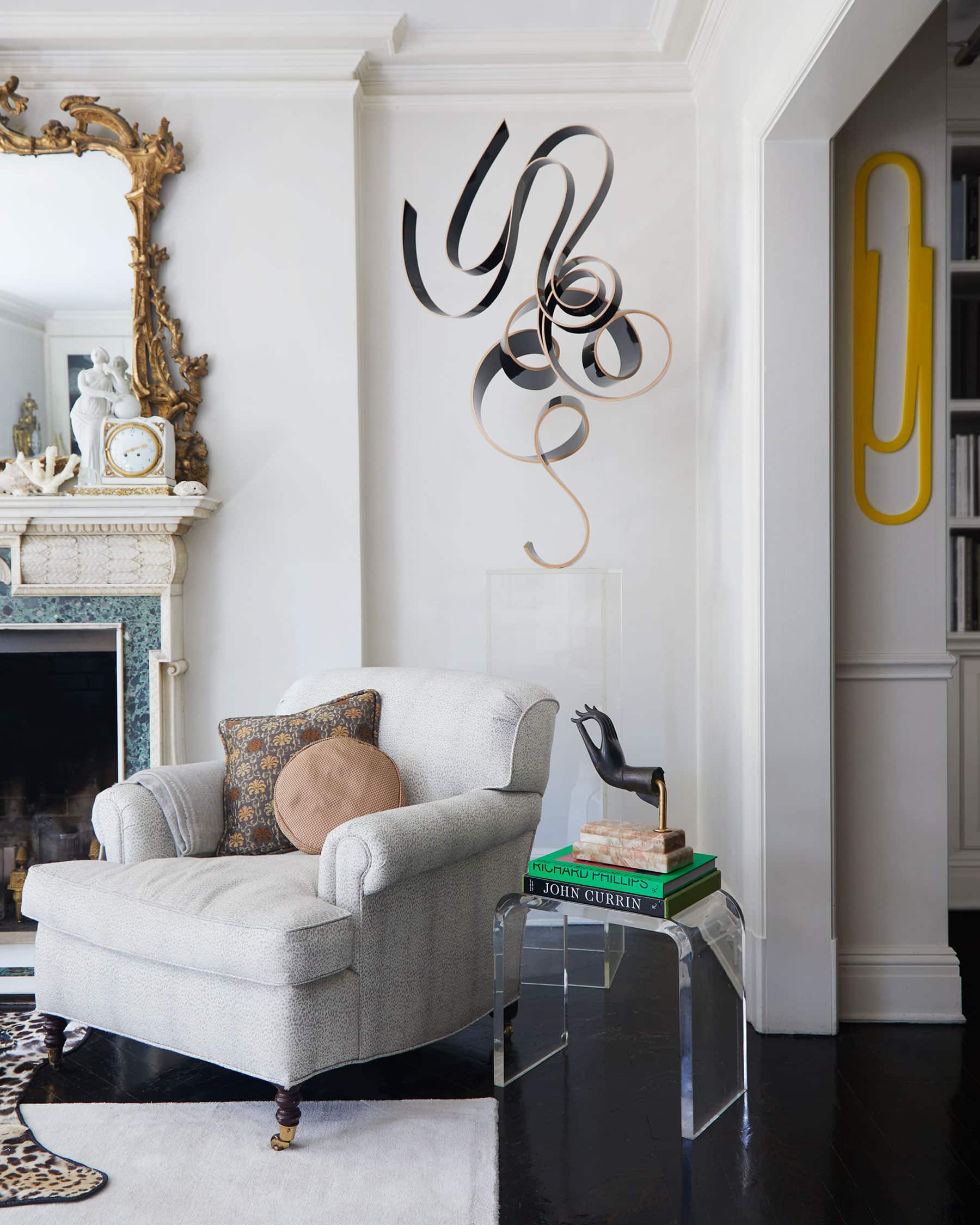 Moros’s rhythmic, ribbon-like sculptures, such as FA4000, 2017, have been exhibited at the New Museum and the Smithsonian Institute. The chair is George Smith and the side table a Lucite piece from the 1970s

Now that she has her own brick-and-mortar gallery space, which she opened on East 62nd Street in 2015, her roster of emerging and mid-career artists keeps growing. “I like to say I take a Southern approach,” Blair says. “It’s all about a very kind, user-friendly relationship. We never had attitude, there was never a dumb question, and the artists felt comfortable with our strategy. They’re like children to me. And along the way, we’ve gained respect from blue-chip collectors for being honest and very approachable.”

That same congeniality characterizes the atmosphere of the Clarkes’ home. The girls spread out their toys on the library floor; a curly black-haired dog leaps on and off the pure-white sofa; and old-world treasures mingle effortlessly with freshly minted cutting-edge art. The couple’s furnishings may be serious, but they don’t take themselves too seriously. When, for instance, Alistair points to a living room wall and suggests, “I would happily hang a great eighteenth-century portrait here,” Blair quips, “I’m getting ruffled feathers over here.”

“We really do like to mix things up, and the art and antiques marinate well with one another,” she adds. “Plus, we like living with these things, so they have to go together.” 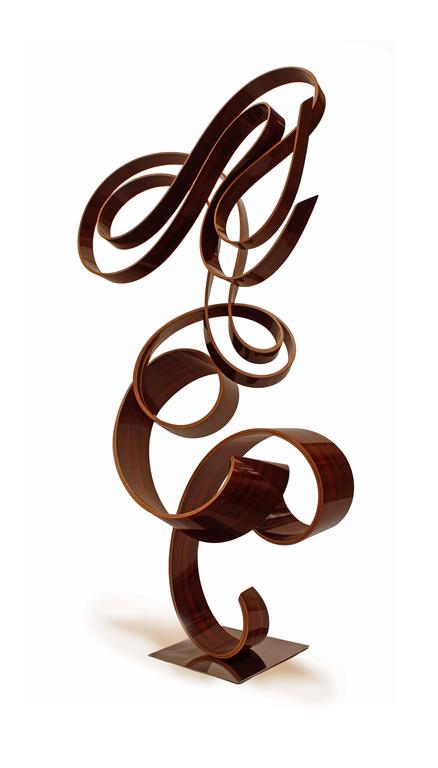 “We love its soaring and expressive lines. Vertical art is powerful and anchors any room.” 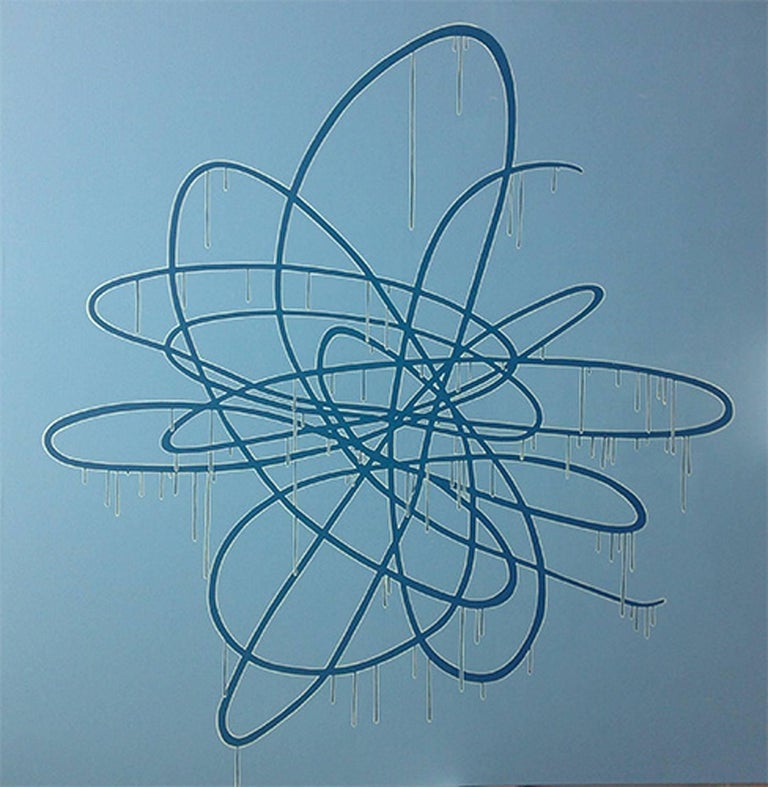 “British painter Lucy Soni pays careful attention to what appears to be a simple scribble, but is in fact anything but.” 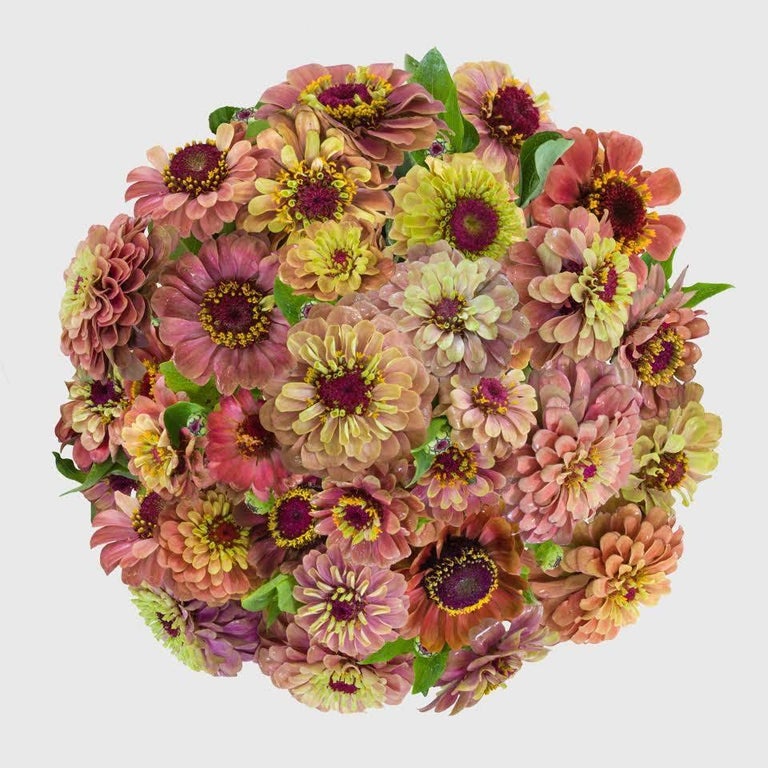 “Richardson likes to joke, ‘Call my artwork anything but beautiful!’ Living with animated flowers is always a good idea.” 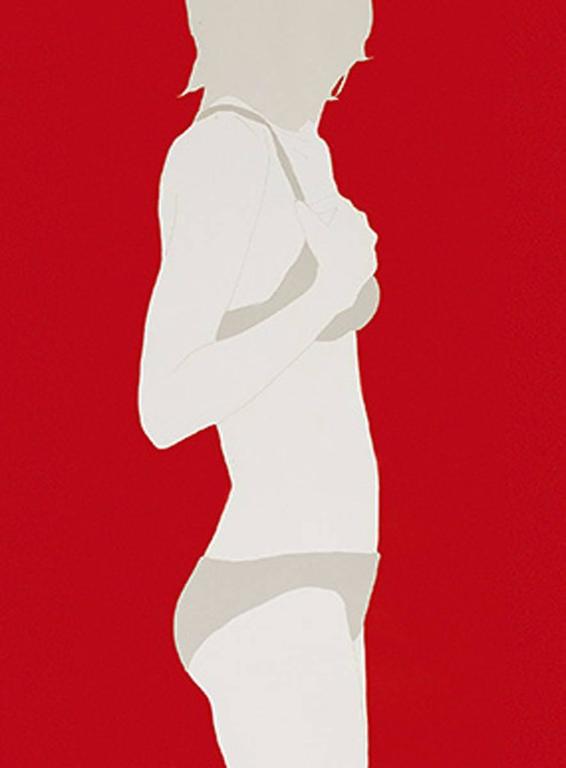 “Natasha Law’s signature silhouettes are a timeless celebration of the elegant female form.” 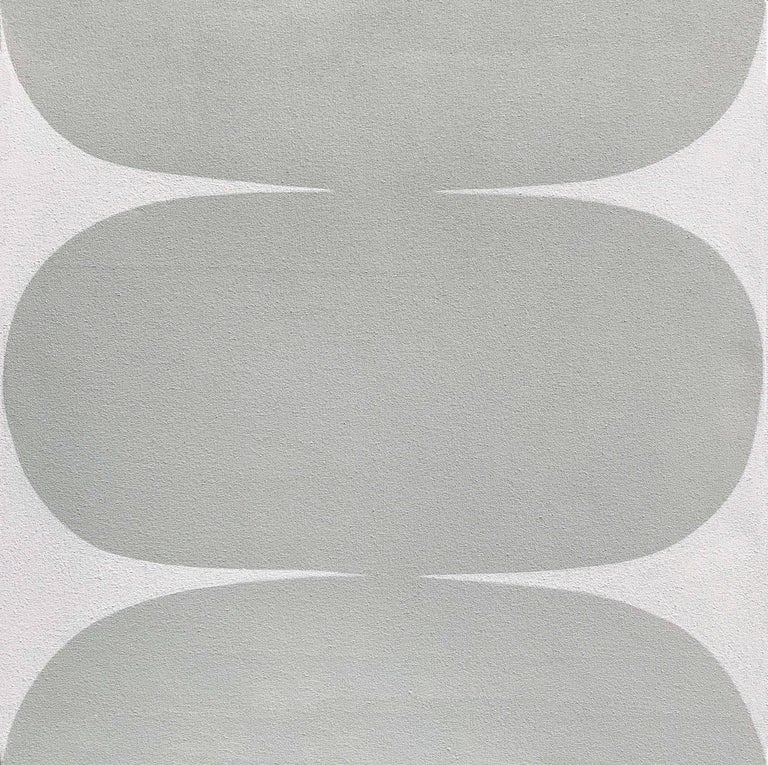 “Sara Genn’s current solo exhibition — up at the gallery until early November — concentrates on her interpretation of wabi-sabi, the Japanese idea of the perfection of imperfection. Her pieces are some of our favorite things to live with, reminding us that life is always unpredictable!” 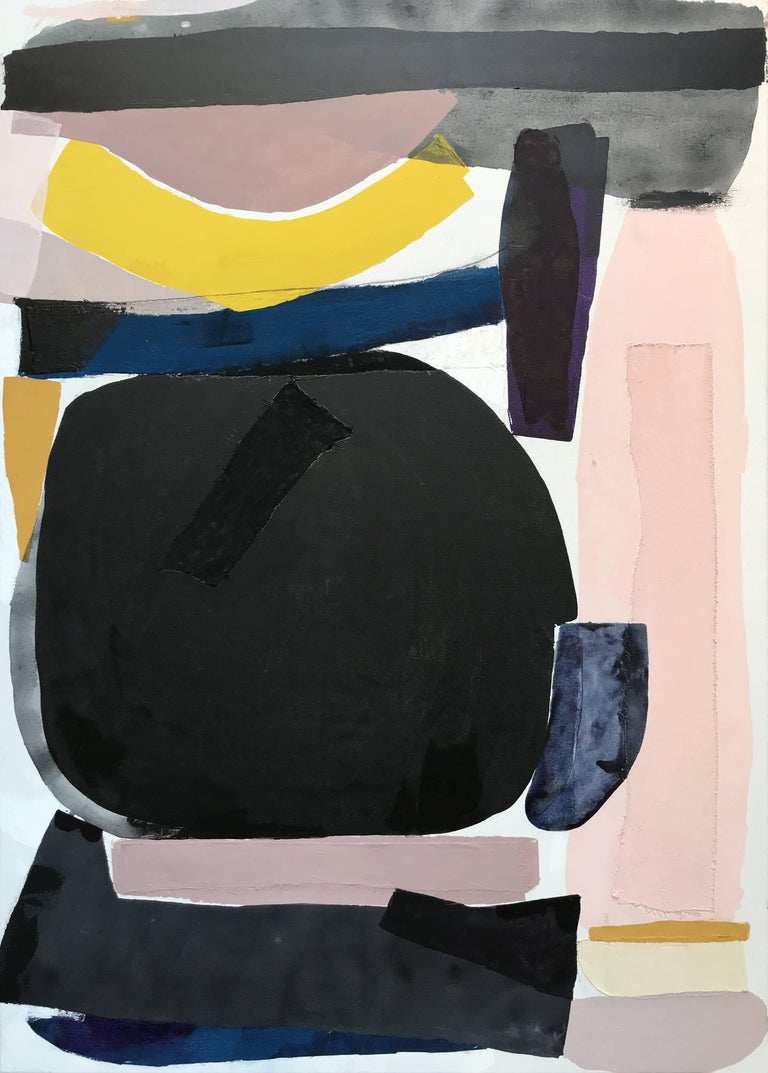 “Speaking of unpredictable, Heather Chontos’s work is always bursting with action and has beautiful harmony — just like our household five days a week!”