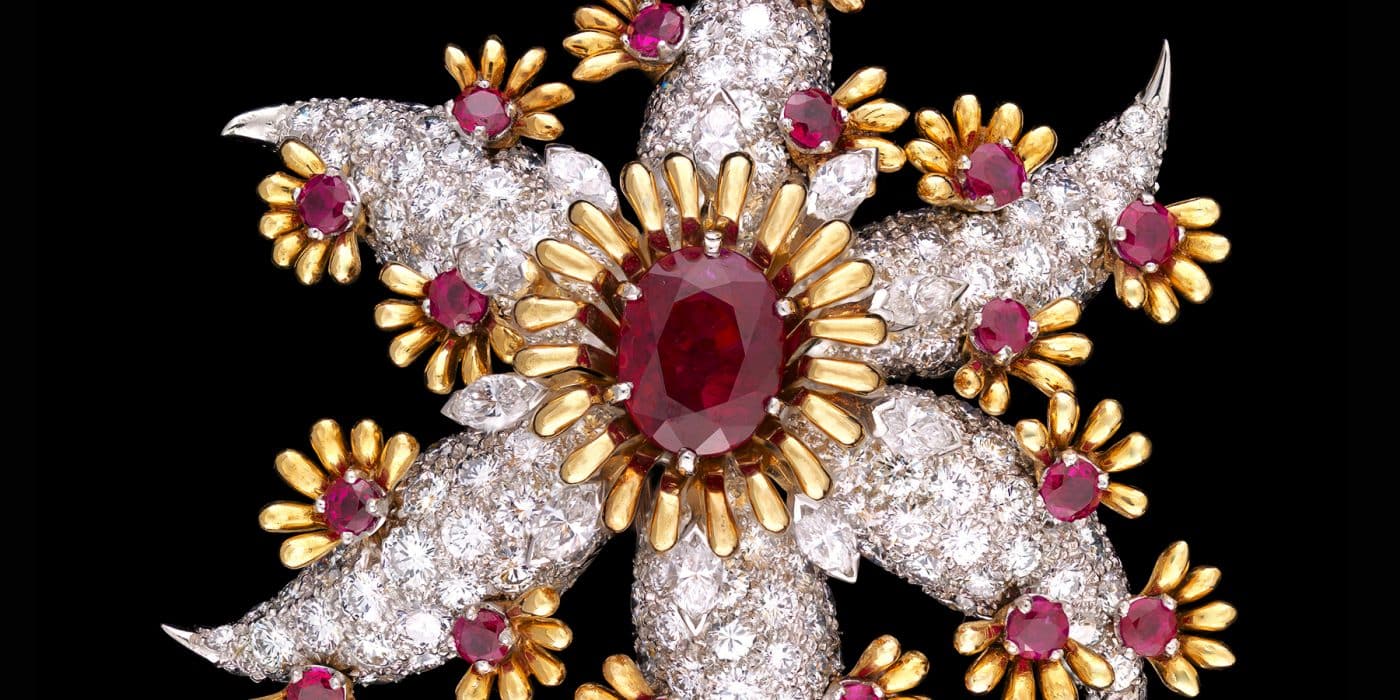 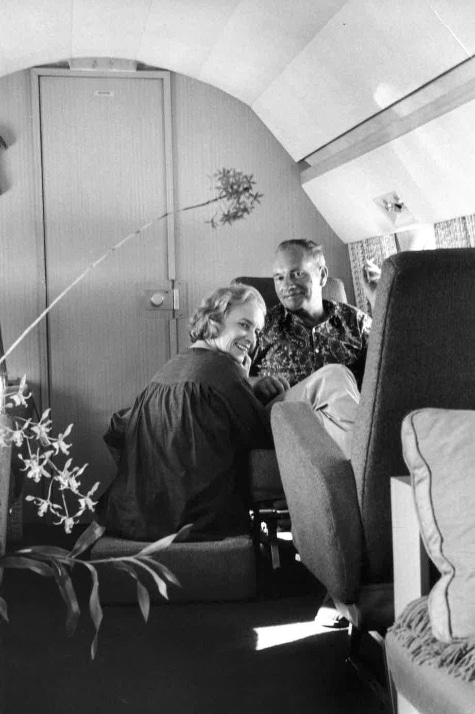 January 13, 2019Bunny Mellon, pictured with Jean Schlumberger on her private jet in this ca. 1970 photo, was a notable collector of the jewelry designer’s work. Her collection is now on display in a museum exhibition and accompanying catalogue (photo by Luc Bouchage). Top: Jean Schlumberger ruby and diamond Sea Star, 1960 (photo by Travis Fullerton, courtesy of the © Virginia Museum of Fine Arts).

Nothing should be noticed. . . . Nothing should stand out,” Rachel Lambert “Bunny” Mellon (aka Mrs. Paul Mellon) famously told a New York Times reporter in 1969 as she surveyed her garden at Oak Spring, the Mellons’ 2,000-acre estate in Virginia hunt country. She would come to be defined by this dictum of quiet, deliberately imperfect perfectionism, but subtlety is relative. Her approach to collecting — art, furnishings, jewelry, design objects, rare books and manuscripts — is best understood through one of her less-well-known proclamations: “It is wasteful to be mediocre.”

Mellon, who died in 2014 at the age of 103, found a fellow champion of organic harmony and sworn enemy of the commonplace in the French-born jeweler and designer Jean Schlumberger, amassing a vast collection of his work, which she donated to the Virginia Museum of Fine Arts. Approximately 140 of those pieces are showcased in “Jewels of the Imagination,” which runs through March 31 at the Museum of Fine Arts (MFA) in St. Petersburg, Florida. A companion exhibition, “Drawn to Beauty” (on view through March 10), explores Schlumberger’s life and creative process, punctuating displays of photographs, sketches, letters and personal items with jewelry that is at once precious and playful, timeless and vital. 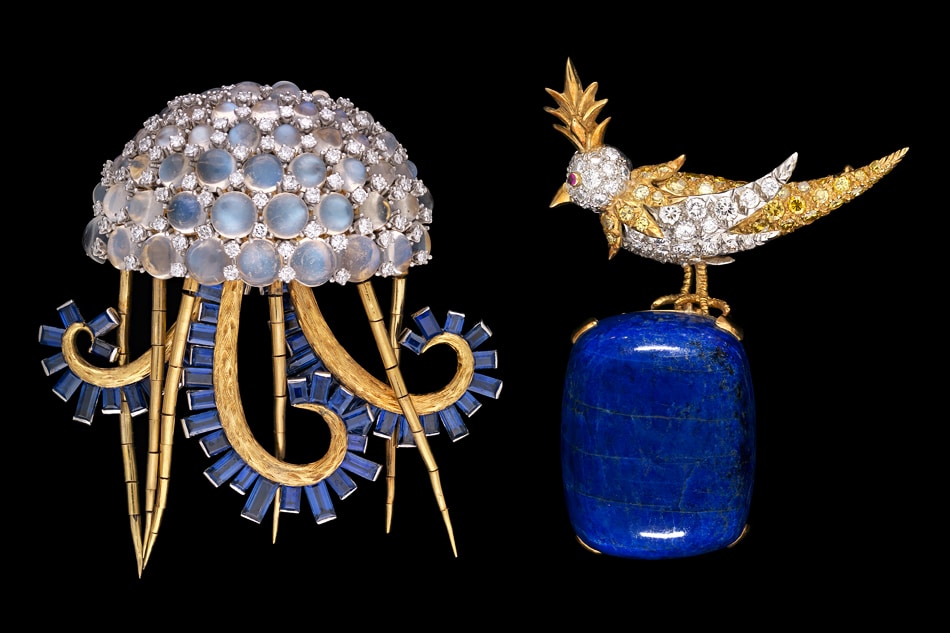 “Jean Schlumberger’s great gift was taking the wildness, the spontaneity and the beauty of the natural world and translating them into spectacular pieces of jewelry,” says Stanton Thomas, curator of collections and exhibitions at the MFA. “Using flowers, sea creatures, insects and birds as his models, he boldly reimaged them into colorful, vibrant gems. Schlumberger truly transformed jewelry design during the mid-twentieth century.” Along the way, he attracted such jet-set clients as Audrey Hepburn, Elizabeth Taylor, Gloria Vanderbilt, Babe Paley, Jacqueline Kennedy and, of course, Mellon, who introduced Kennedy to Schlumberger’s work with the gift of a paillonné enamel piece that became known as the Jackie bracelet.

Born in 1907 to a family of successful textile merchants, Schlumberger received no formal training in art or design. In the late 1930s, his earliest jewelry designs — brooches made from Meissen porcelain flowers harvested from Paris flea markets — caught the eye of fashion designer Elsa Schiaparelli, who hired him to make gloriously unconventional buttons for her whimsical garments. After an aborted stint in the army (he was evacuated from Dunkirk), Schlumberger ended up in New York, where he reunited with a childhood friend, Nicolas Bongard (nephew of fashion designer Paul Poiret). The two opened a jewelry salon in Manhattan and, later, one in Paris. 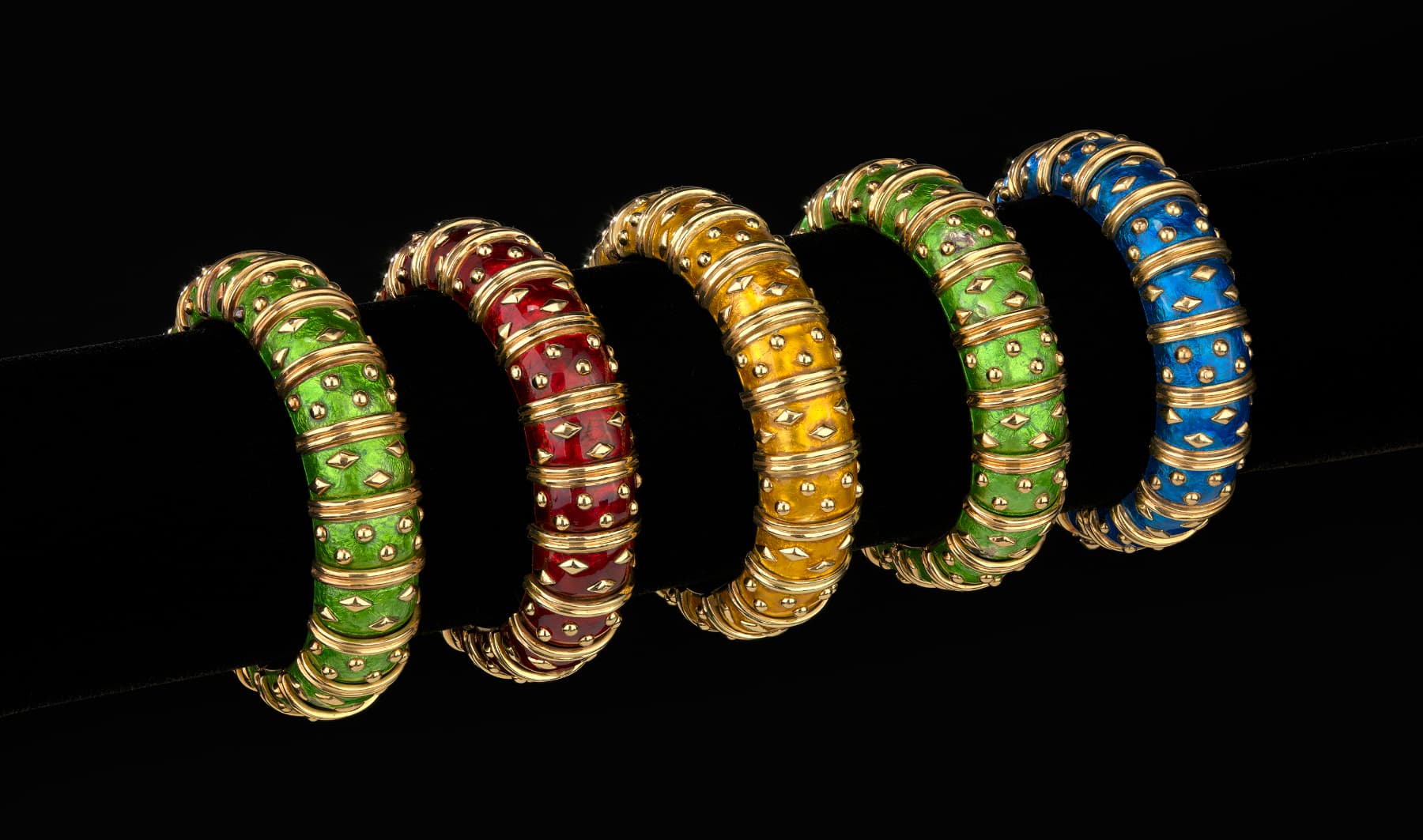 “The designer began each of his three-dimensional works with a graphite drawing on tracing paper,” Kristie Couser, the former curatorial assistant for the Mellon Collection at the Virginia Museum of Fine Arts, writes in the lushly illustrated exhibition catalogue (Yale University Press). “He developed these initial designs with pen and ink and touches of gouache. Bongard then translated the drawings into a wax or clay model.”

Among Schlumberger’s earliest supporters and closest friends was fashion editor Diana Vreeland, whose Trophée de Vaillance clip, a 1941 commission that is considered among Schlumbeger’s early masterpieces, is featured prominently in “Drawn to Beauty.” Inspired by a trophy of gallantry that Vreeland had admired on an 18th-century statue, it manages to artfully combine a shield encrusted in amethysts and rubies, assorted enameled weapons and a platinum breastplate and tunic of dazzling gold and diamond chain mail. 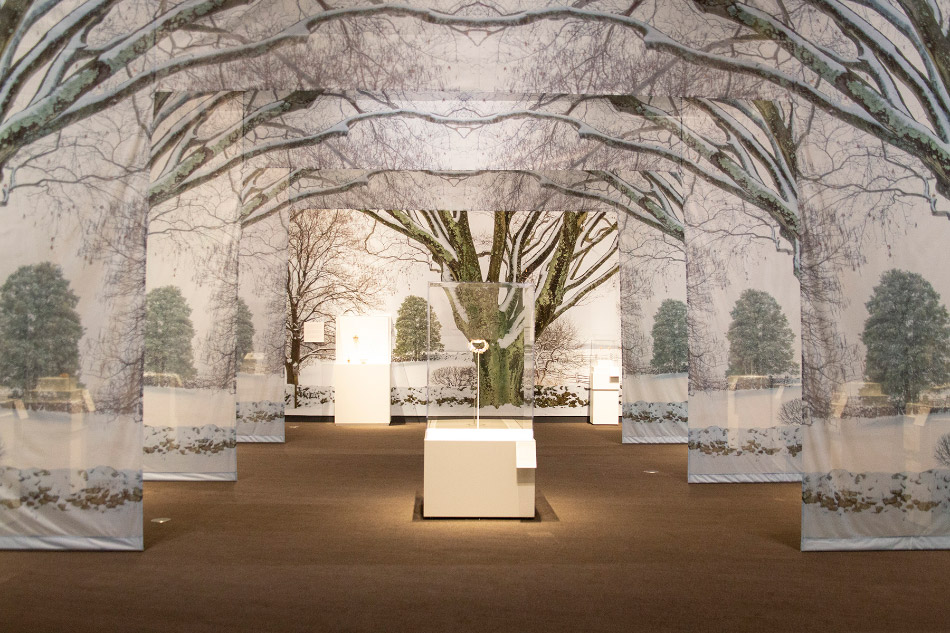 To Vreeland, who kept the jeweled clip propped on her bedside table each night, standing out was a virtue. “It’s not at all subtle,” she once said. “It takes over when a woman wears it. It’s exciting. A Schlumberger lights up the whole room!” 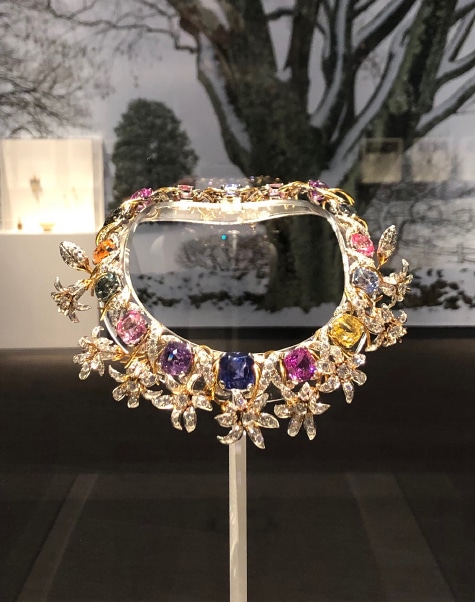 One especially illuminating creation is in the form of a jellyfish. Known as La Méduse, the brooch was designed during Schlumberger’s tenure at Tiffany & Co., where he served as a vice president from 1956 until his retirement, in the late 1970s (he died in 1987), meriting a sumptuous studio-cum-salon of his own on the mezzanine level of the company’s Fifth Avenue flagship store. The example from Mellon’s collection was made in 1967.

Topped by a domed surface studded with cabochon moonstones and circular-cut diamonds, La Méduse evokes not only the bioluminescent glow of a sea jelly but also its movements. Interspersed among a trio of curling tentacles set with a jazzy mix of baguette sapphires are five tapered and articulated ones of polished gold, which dangle freely from the base of the bell and sway gently with the wearer.

“I try to make everything look as if it were growing, uneven, organic,” Schlumberger once said. “I want to capture the irregularity of the universe.” To do so, he looked to flora and fauna for source material (“The most constant feature of the documentation I use is that it has no relation to jewelry,” he explained). He also eschewed selecting gems according to their monetary value, quipping, “You might as well pin a check to someone’s lapel.” 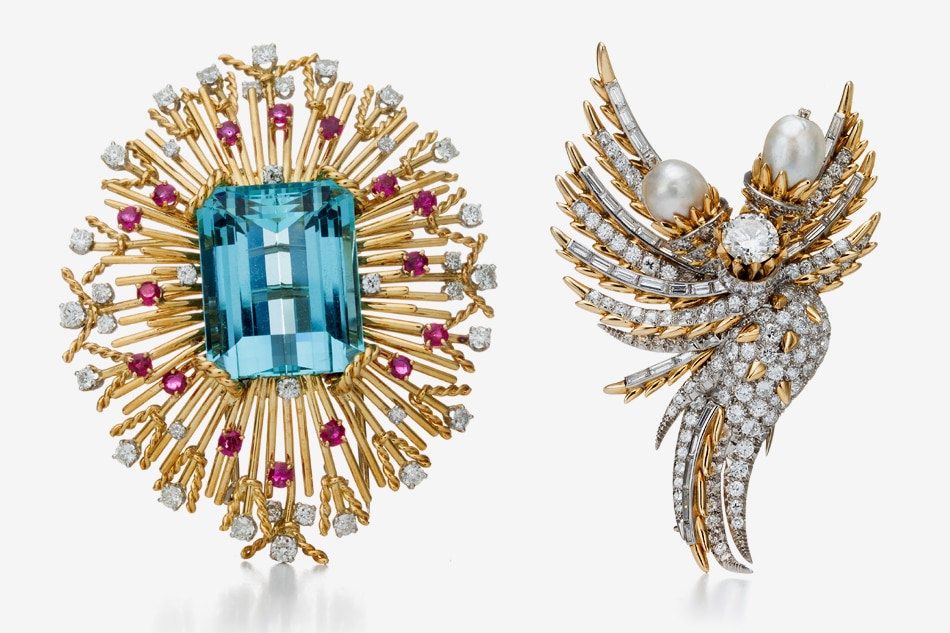 “Schlumberger was a major proponent of juxtaposing diamonds with unusual combinations of gemstones, such as sapphires, peridots and citrines, which became a popular practice in the second half of the twentieth century,” writes Couser. He intensified his preferred palette of colored stones with enamel and 18-karat gold, once encasing a humble terra-cotta pot selected from Mellon’s shed in a lattice of gold to create a fitting home for a golden sunflower with a giant gemstone (originally a rare 17-carat Kashmir sapphire, now a massive amethyst) at its heart. Flower Pot (1960) is a dazzling highlight of the MFA show. 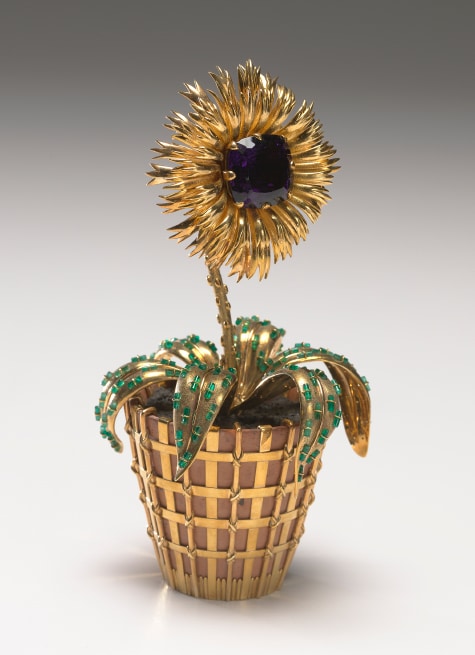 “I think, for him, the idea was not only tapping into the beauty of nature but also considering how it could be done in the most elegant way,” says Rush Jenkins, of WRJ Design, in Jackson Hole, Wyoming, who designed the “Jewels of the Imagination” exhibition. A trained landscape architect and the former director of design for Sotheby’s New York, Jenkins also created the 2014 exhibition that accompanied the auction house’s sale of more than 2,000 of Mellon’s possessions, among other blockbuster preview displays.

“Having visited her gardens in Virginia, I was able to reflect back on the incredible beauty of those grounds and decided that the best way to connect Mrs. Mellon to Jean Schlumberger was through nature,” says Jenkins. Organized thematically to highlight distinct bodies of Schlumberger’s work and Mellon’s collection (which includes such objets de vertu as cigarette cases, candlesticks, salt cellars and the aforementioned Flower Pot), the show’s spectacular installation centers on life-sized images of Mellon’s garden at Oak Spring during the four seasons. The work of garden and landscape photographer Roger Foley, these images also appear in The Gardens of Bunny Mellon, published in October by Vendome Press.

The installation captures the essence of a relationship that transcended both patronage and friendship. “Bunny recognized that Schlumberger was not just ‘a jeweler’ but an artist working in a different medium, just as she was an artist in landscape and garden design, working with earth, plants, stone and, most of all, with space,” cultural landscape historian Mac Griswold told a Virginia newspaper in 2017. A longtime family friend of the Mellons’ who is working on a biography of the late heiress, Griswold continued: “He and Bunny reveled in the intricacy of nature and goldsmithing, and the sense of surprise.”