A Tavola with Casa Cabana and 1stdibs! 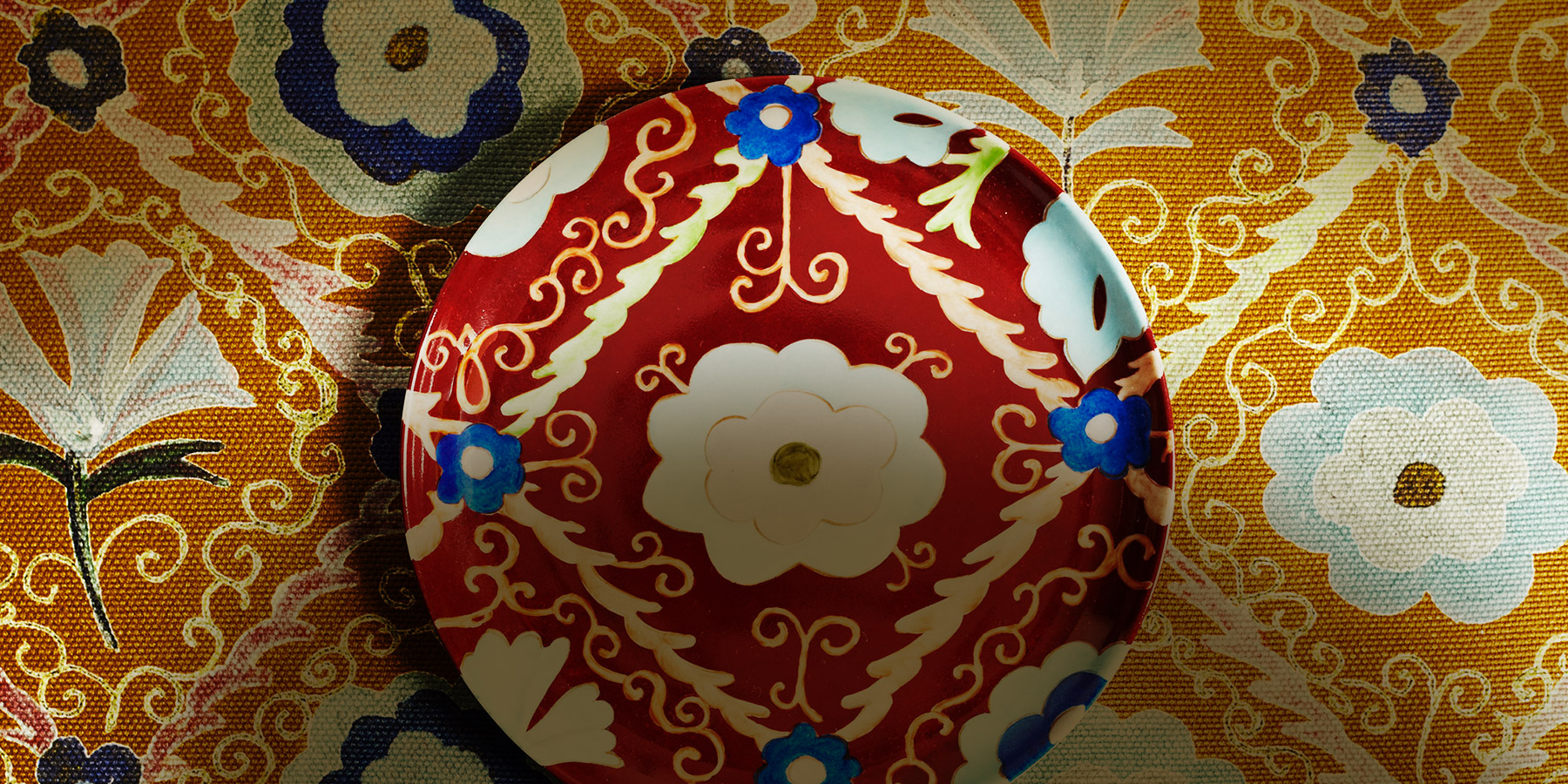 The high-style interiors journal Cabana has launched a collection of artisanal tableware, wallpaper and jewelry inspired by its luxe pages. Read the story behind these maximally patterned collectibles, which are selling fast.

November 9, 2015For the offerings in her Casa Cabana pop-up, the publisher, editor and style-setter Martina Mondadori Sartogo (photographed in her London home by Miguel Flores-Vianna) embraces sumptuous, handmade designs that harken back to craftier times, such as the Cabana wallpaper by Dedar beside her. Top: A suzani-motif dinner plate by Idarica Gazzoni for Arjumand’s World set against Dedar fabric. Photo courtesy of Cabana

Cabana is a humble-sounding name for a design magazine that has touched a nerve with a rarefied group of readers from around the world. “It has exploded beyond our imagination,” says its Milan-bred creator Martina Mondadori Sartogo, the effortlessly chic entrepreneur and socialite who is now based in London.

Now on its fourth biannual issue, Cabana was founded in 2014 as something of a reaction against squared-off, streamlined modernity — you could say that it argues for serifs in a sans-serif world. “Our fans are responding to matters of taste,” says Mondadori Sartogo, the great-granddaughter of the founder of the behemoth Italian publishing house. “They are no longer going for the sleek, functional design which was and still is the biggest trend.” She adds: “People want to be emotional and cozy again — maybe because of how the world is going right now. We want to inspire, more than give practical advice — Cabana is a mood board, almost.”

The fourth issue is loosely inspired by flowers, and it ranges from a conversation with fashion designer Tory Burch to a look at traditional Japanese crafts. Architect and decorator Ashley Hicks (son of design legend David Hicks and Lady Pamela Hicks) writes about the pleasures of not reading a prized 15th-century text in his collection, and there are lush photo spreads of a Russian dacha and a home in Bologna that is intricately layered with wallpaper and fabrics in the manner that Cabana often celebrates. Cabana also celebrates the medium of print itself: Every issue is a collectible design object realized in an array of beautiful papers, every spread lusciously layered with striking images and graphic treatments. 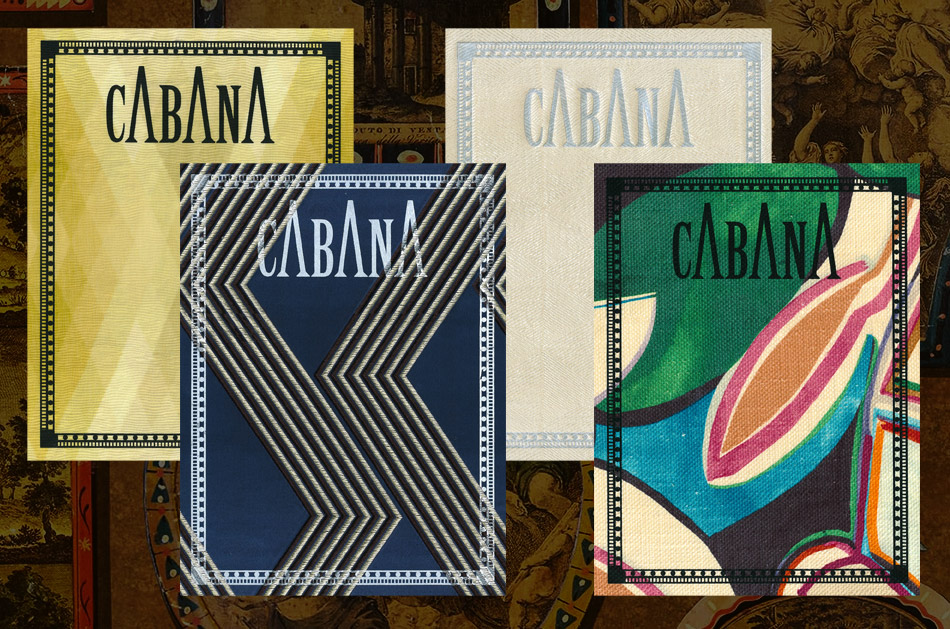 The fourth and latest issue of Cabana magazine comes with four different covers made with fabrics by Dedar. All photos courtesy of Cabana 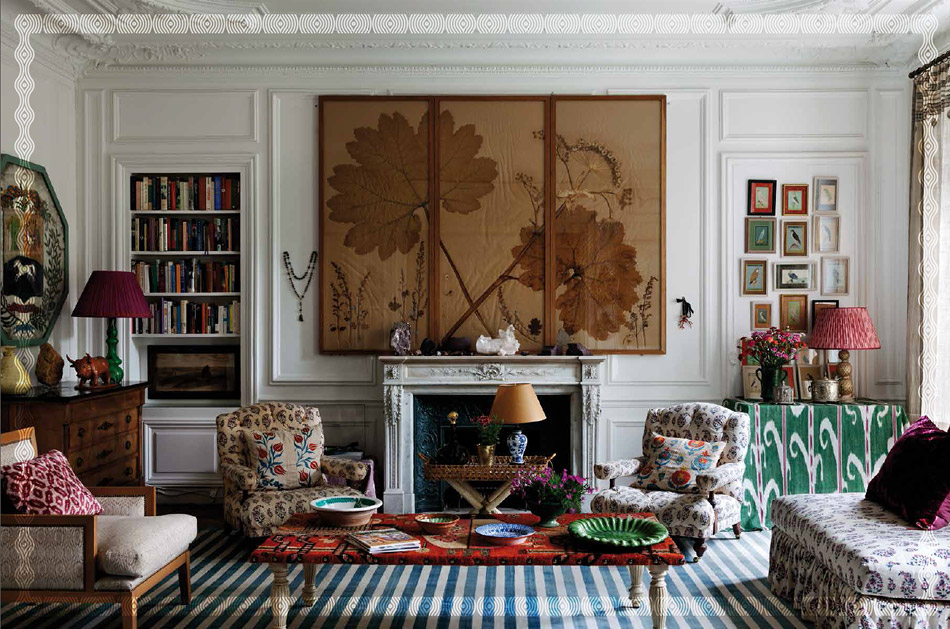 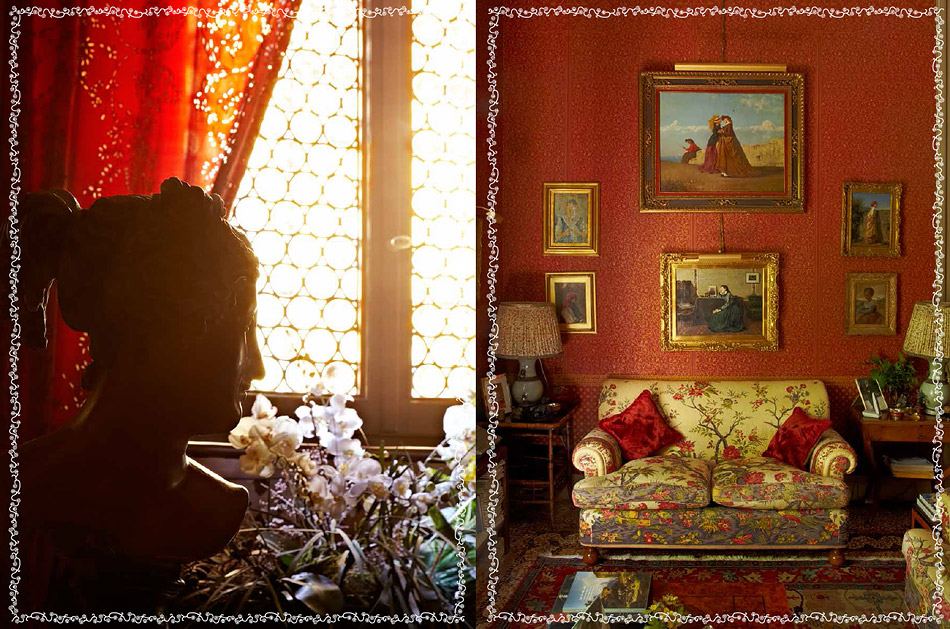 This home in Bologna, built in the 16th century, is realized in shades of burgundy, magenta and terra-cotta, and features artwork by Giovanni Boldini, Federico Zandomeneghi and Angelo Dall’Oca Bianca that depict everyday life. Photos by Guido Taroni 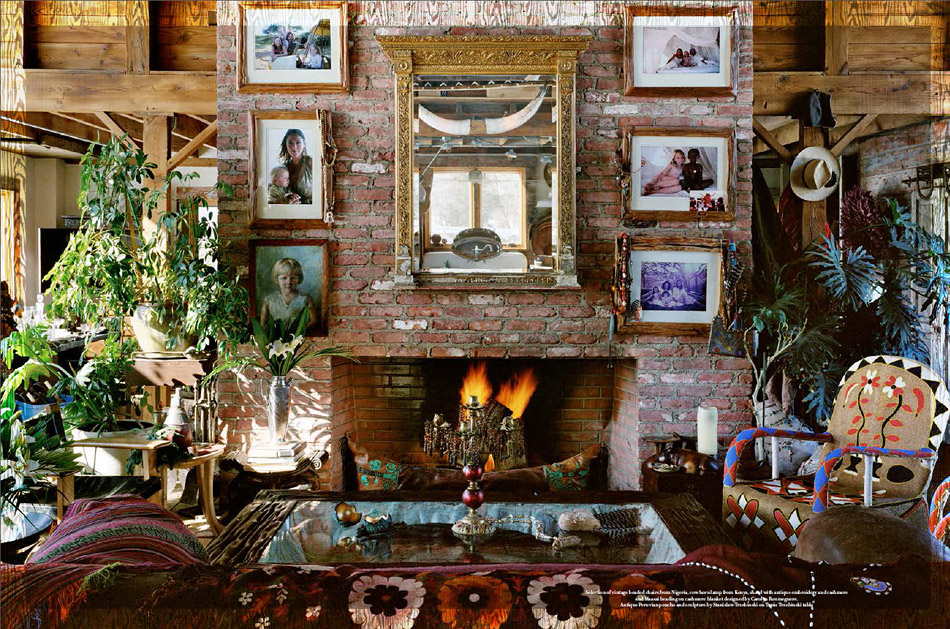 This house is located in Upstate New York, not the African veldt, despite its evocative array of vintage beaded chairs from Nigeria, a cow-horn lamp from Kenya and embroidered textiles with Maasai beading. Photo by Leonora Hamill 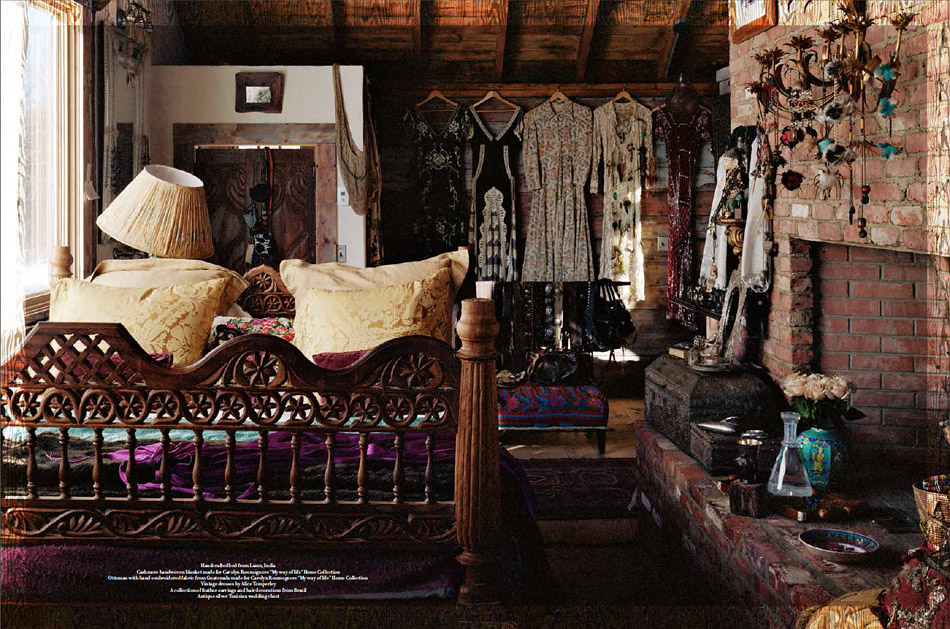 Formerly a barn, the Upstate New York house showcases a handcrafted bed from Lamu, Kenya; handwoven cashmere blanket and ottoman with hand-embroidered fabric from Guatemala made for Carolyn Roumeguere’s “My way of life” Home Collection; vintage dresses by Alice Temperley; and an antique silver wedding chest from Tunisia. Photo by Leonora Hamill 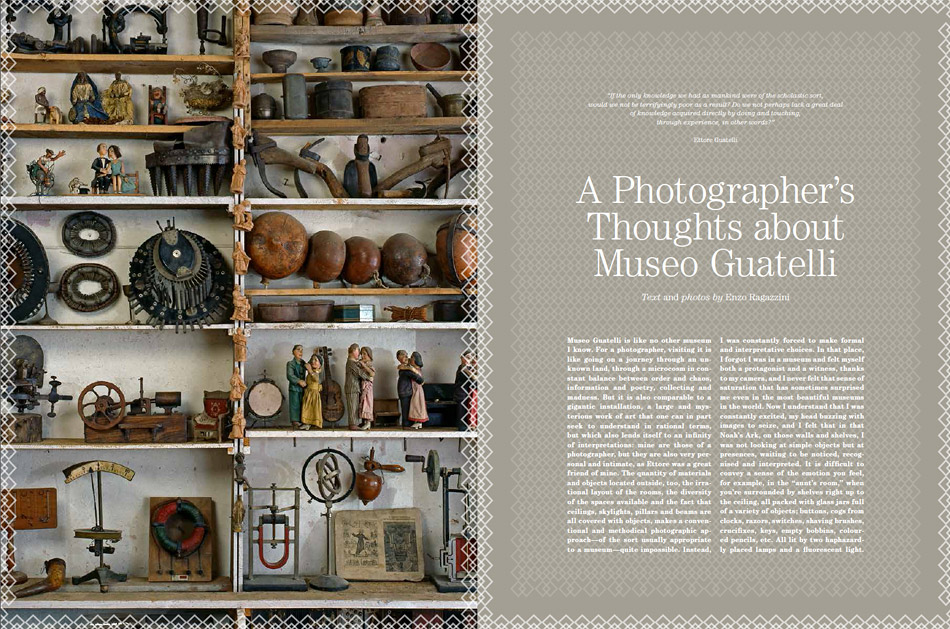 The issue features a story with words and images by photographer Enzo Ragazzini on the Museo Guatelli (near Parma, Italy), an ethnographic museum with an astounding array of objects. 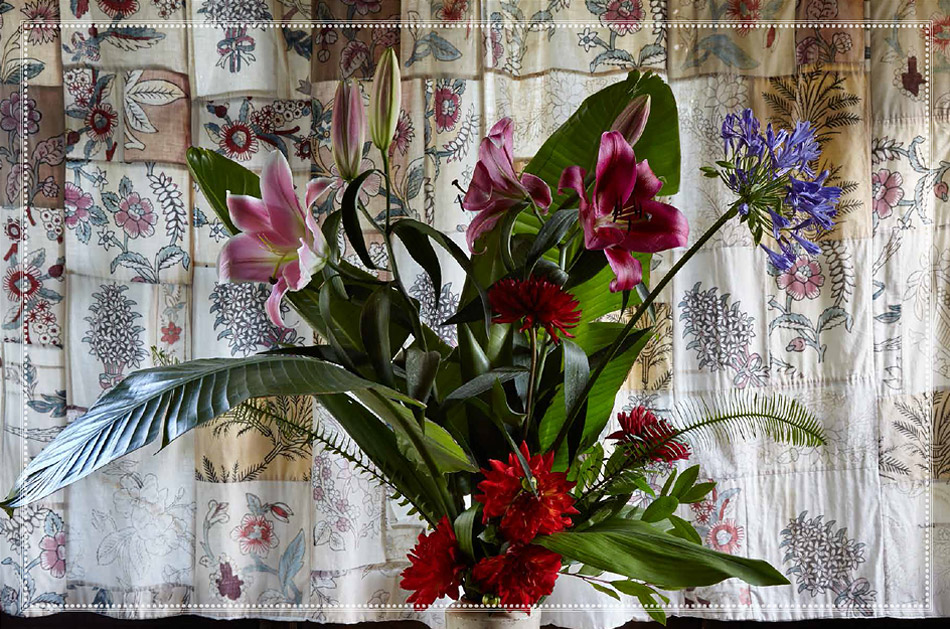 An echt-Cabana house in the Austrian Tyrol offers a perfect still life of a floral arrangement with a complementary textile backdrop. Photo by Guido Taroni 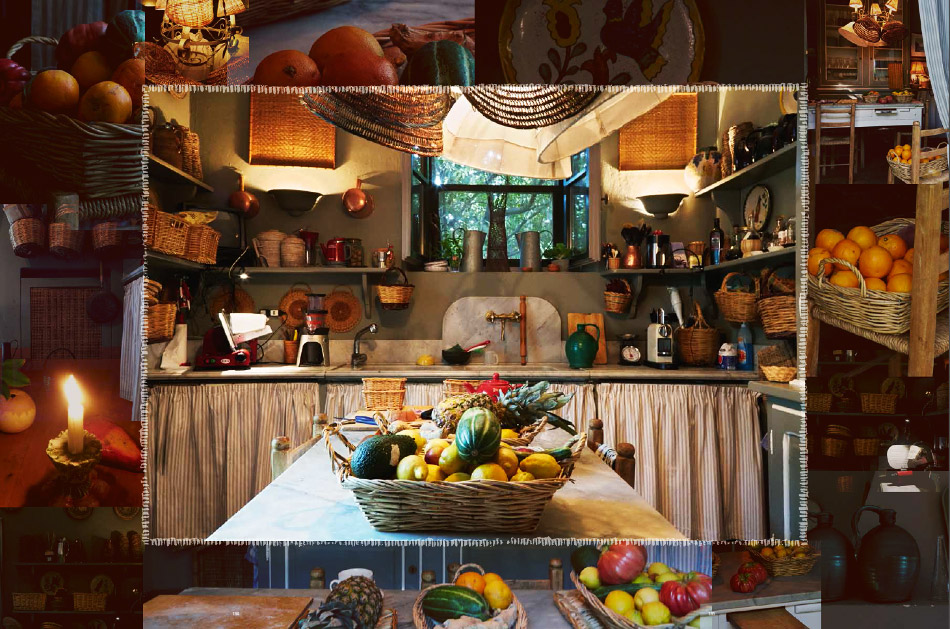 Cabana celebrates still-lives of all flavors, as with these freshly picked vegetables in the southern Tuscan kitchen of Italian businessman Carlo Puri and his wife, Giulia. Photo by Antonio Monfreda and Manfredi Gioacchini 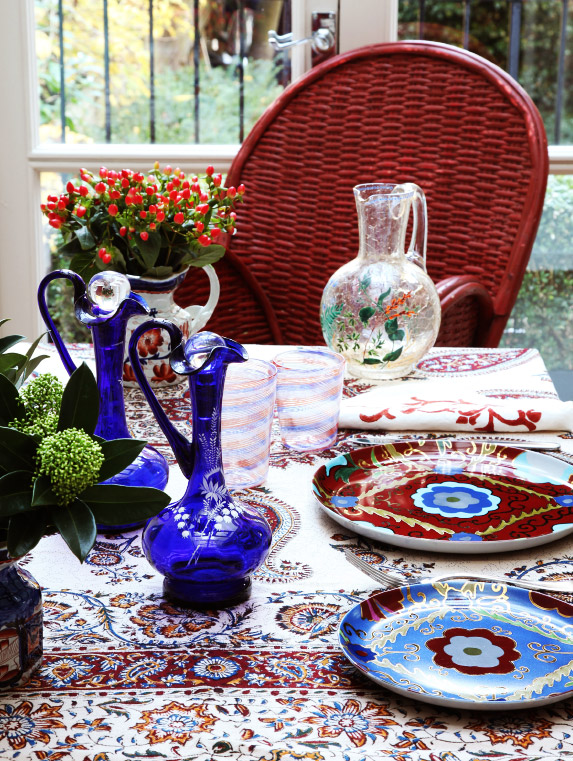 “I like to have a colorful table: patterns and vintage oriental fabrics as a tablecloth, a printed African runner,” says Mondadori Sartogo, whose London townhouse is the setting for a Cabana-worthy vignette. “And I like to layer things.” Photo by Miguel Flores-Vianna

In honor of this latest Cabana, Mondadori Sartogo has partnered with 1stdibs once again for her second online pop-up sale, focused on entertaining and featuring the work of Italian artisans, both topics dear to her heart. She frequently hosts dinners at her South Kensington townhouse for friends and family, serving up her signature pear-chocolate crumble, as well as vegetable cakes and other northern Italian delicacies.

The Casa Cabana sale means that “people can get a piece of the Cabana world,” says Mondadori Sartogo. “My entertaining is very casual, but elegant — very Italian. I like to have a colorful table: patterns and vintage Oriental fabrics as a tablecloth, a printed African runner. And I like to layer things.” Don’t expect a matchy-matchy look if you’re invited over for a meal: “The vases aren’t all the same. I’ll mix a Victorian one with a vintage bohemian example,” she says.

Just last week, Mondadori Sartogo cohosted an 80-guest dinner party (featured in The Study) with 1stdibs and Dedar, the Milan-based fabric and wallpaper specialists, at Iris Studios, a photography space not far from her home. The group included decorators and such style-setters as Nicky Haslam, Jasper Conran, Charlotte Dellal, Jeremy and Lauren Gurvich King and Duncan Campbell and Charlotte Rey, the young creative consultants responsible for the look of the room.

That look was echt-Cabana, showcasing some of the items from the sale, including a custom Dedar wallpaper. “It’s based on a screen that my dad found at a California flea market in the 1970s,” Mondadori Sartogo says of her collaboration with Dedar, which extended to a set of bright red velvet poufs, as well as the covers of her current issue. (As with past issues, the new Cabana has four variants of a cover, all printed on vintage Dedar paper.)

Artisanal objects were at the heart of the party — and are the highlights of  the sale — starting with the hand-painted linen napkins from Stamperia Bertozzi, based in Gambettola, Italy, near the principality of San Marino. “People love the return to craft,” says Mondadori Sartogo, who picked all the items in the sale, and collaborated on the creation of many.

Some of the artisans went outside of their comfort zone for the pop-up. Idarica Gazzoni, of the Milan firm Arjumand’s World, usually makes fabric and wallpaper, but for the sale, she designed a set of four ceramic plates with hand-painted Uzbeki-inspired suzani patterns based on her fabric designs.

“People want to be emotional and cozy again,” says Mondadori Sartogo. “Cabana aims to inspire, more than give practical advice — it’s a mood board, almost.”

“To me, Martina is doing a fantastic job and giving a soul to a world that was forgotten,” says Gazzoni, whose shop is centrally located in Milan, near the famous Duomo. The floral pattern — in keeping with the issue’s theme — comes in red for the six dinner plates, and blue for the six dessert plates.

Osanna Visconti di Modrone, another Milanese artisan, has created several sets of elaborately turned cutlery in silver, as well as two sets of rough-hewn bowls and two vases in bronze. They are all are a departure from her usual specialty, jewelry. “Nature is my inspiration,” says Visconti, who is married to the nephew of the great Italian film director Luchino Visconti. 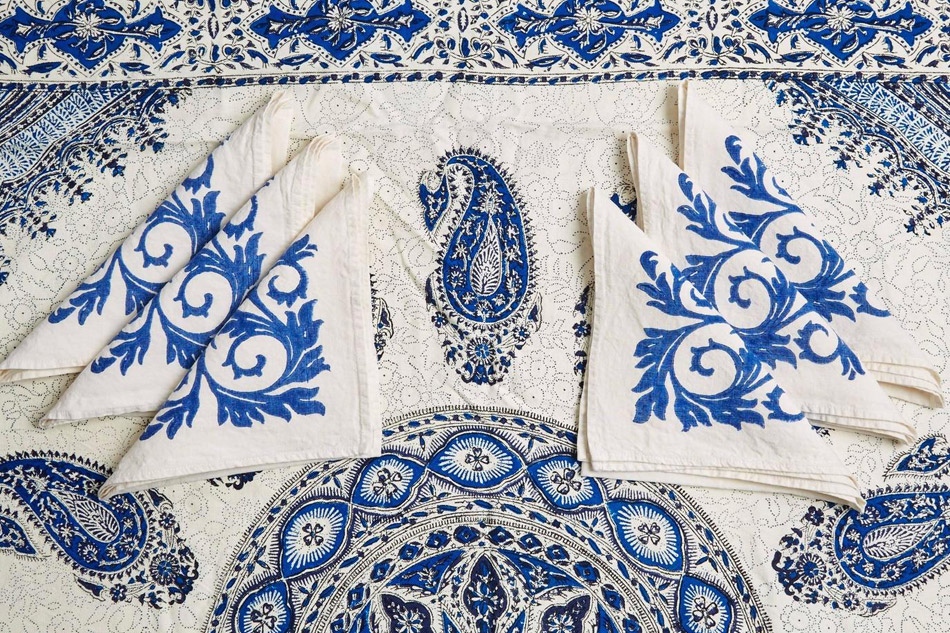 Since the 1920s, the Bertozzi family has been making hand-painted and hand-printed items, like these blue-and-white napkins inspired by the Acanthus plant that grows naturally in the woodlands and hillsides of Italy. Photo courtesy of Stamperia Bertozzi 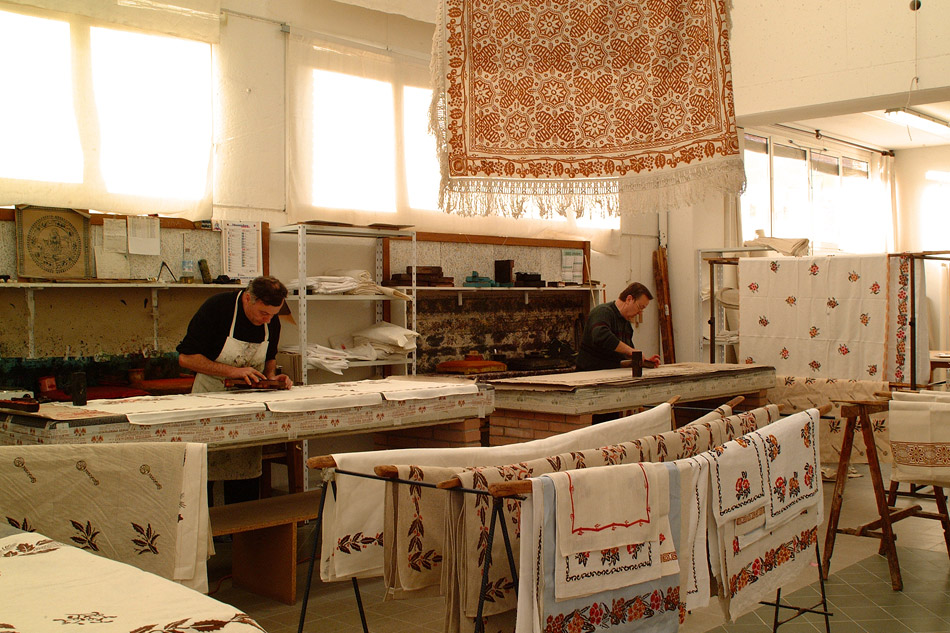 Pierpaolo Bertozzi (right) and a colleague work in their studio in Gambettola, Italy, 45 minutes south of Ravenna. Photo courtesy of Stamperia Bertozzi 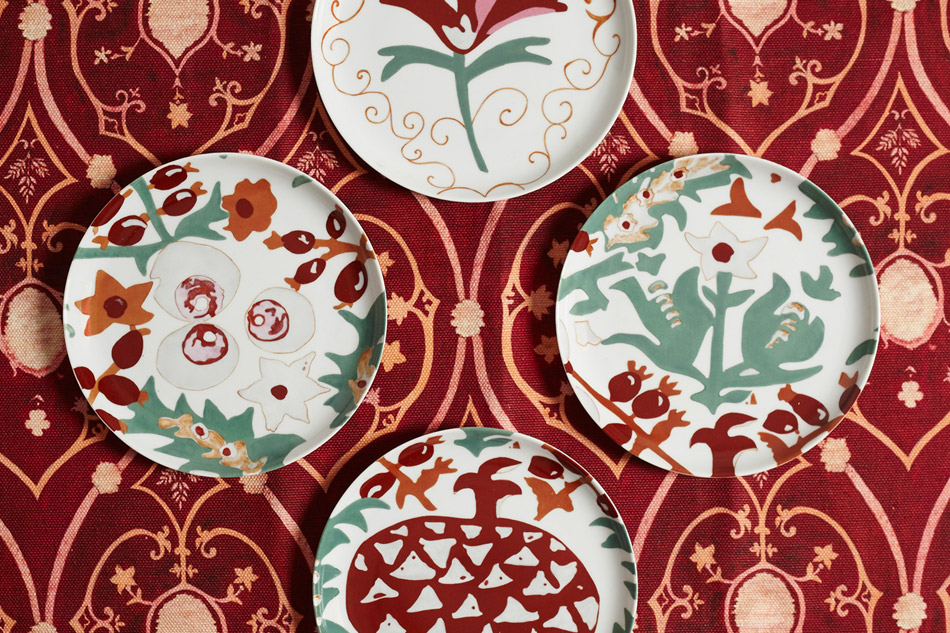 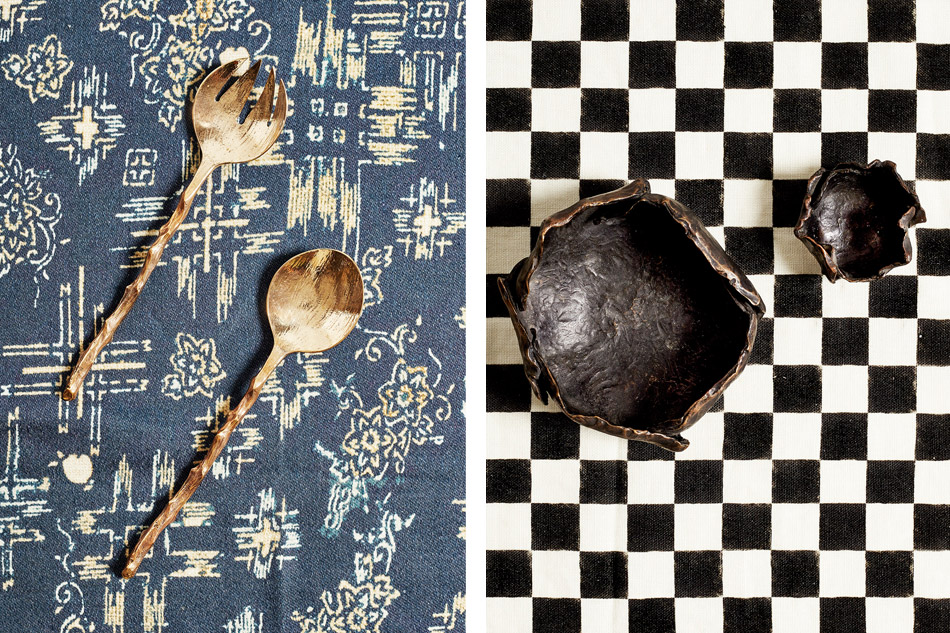 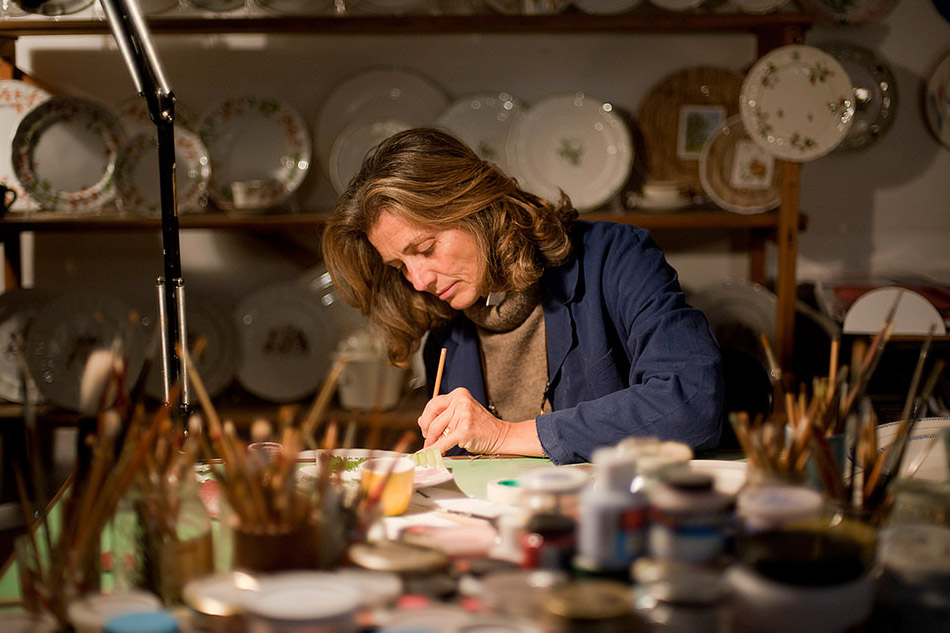 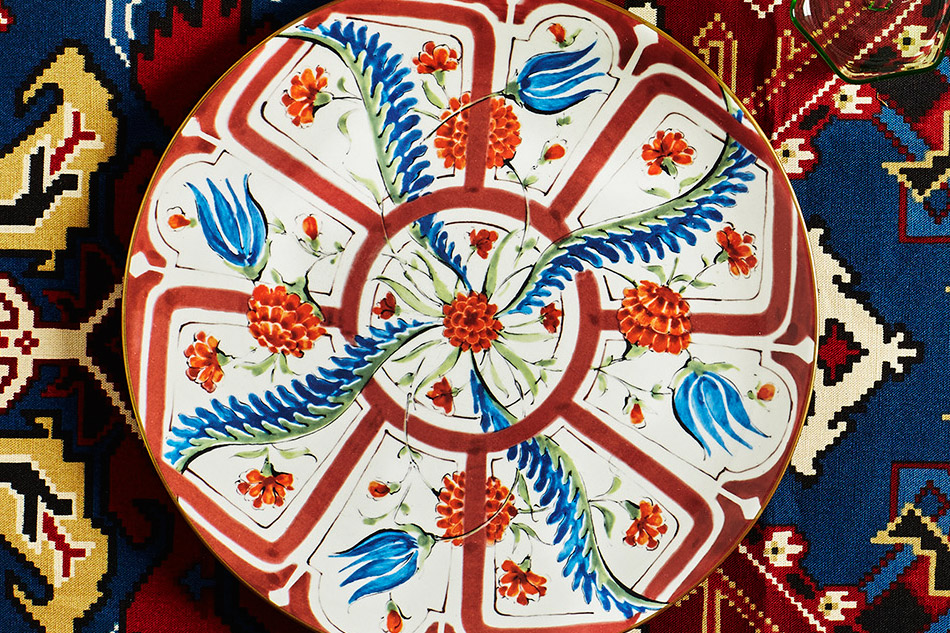 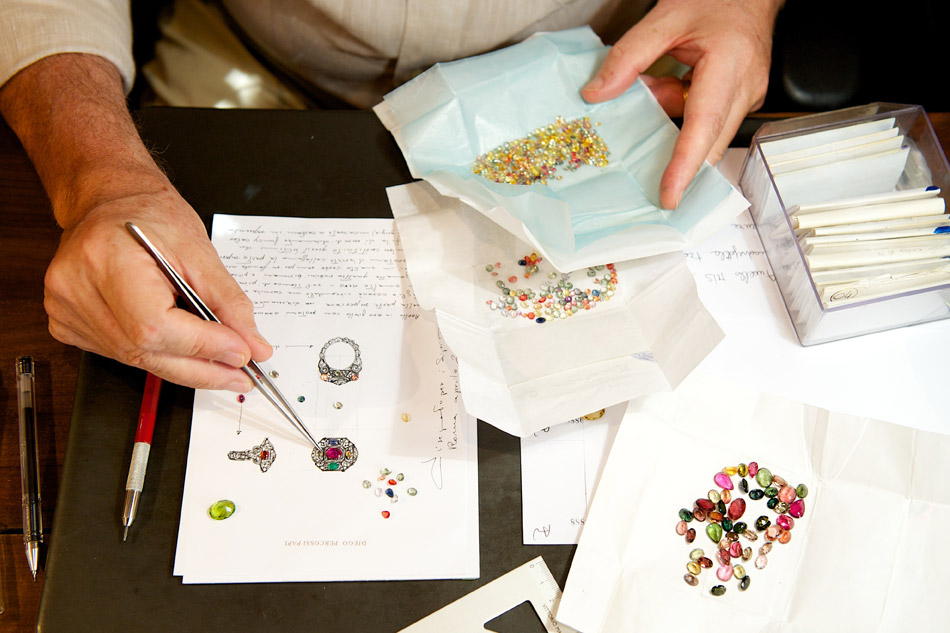 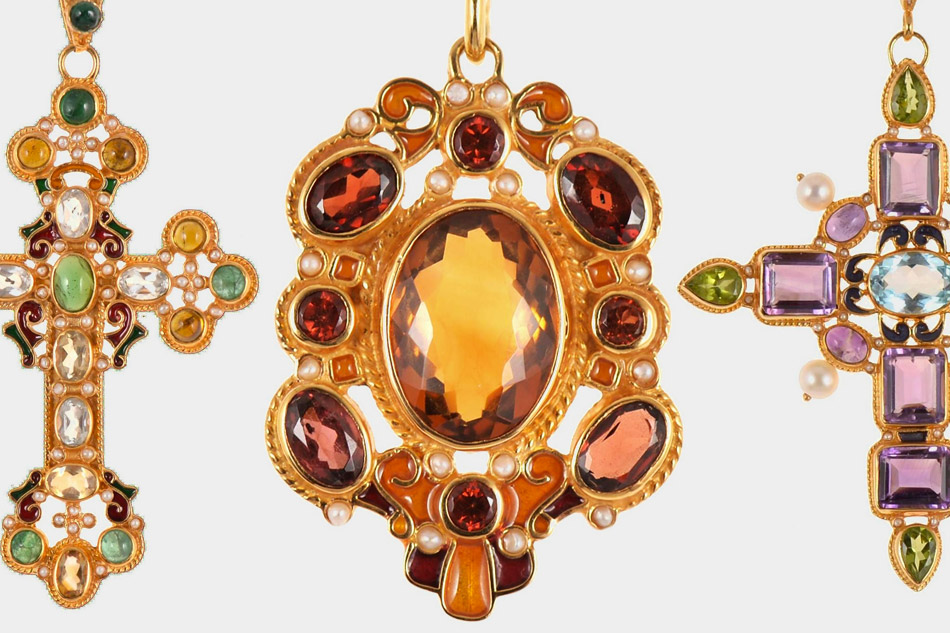 She has been operating Studio Visconti for 20 years and now collaborates with her daugher, Madina, on the lost-wax process that creates bronze pieces like the bowls. “The shapes are very organic,” says Visconti, “something between a cabbage and a peony.”

Another Milanese mother-daughter team, Constanza and Benedetta Paravicini, has created a set of four ceramic dinner plates with an Iznik flower motif. “We personally hand-paint them, and the designs are ours,” says Benedetta, and they collaborate with another artisan on the firing of the ceramics. “We work quite well together, my mother and I.” A less expensive version of the plates is printed, rather than hand-painted, but based on the original. 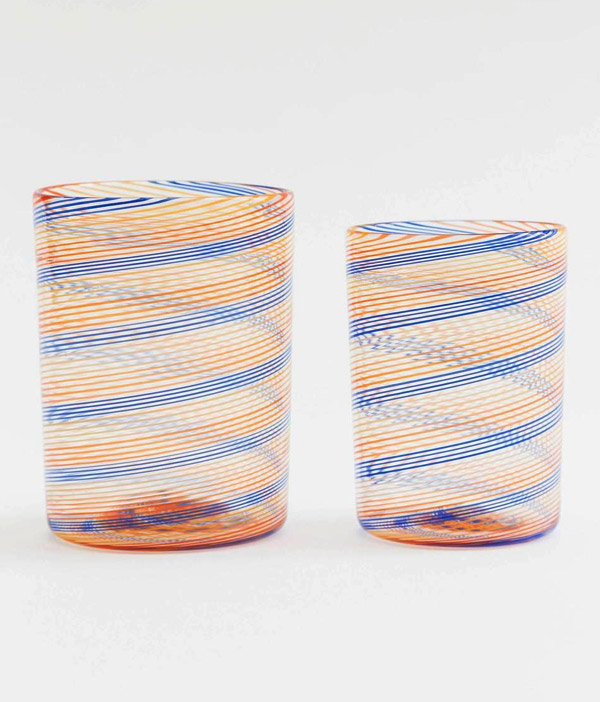 One exception to the home theme in the sale is a series of Baroque-inspired, cloisonné enamel jewelry pieces from Rome’s legendary Percossi Papi, loosely modeled on Greek and Latin crosses and embedded with precious and semiprecious stones — “a sophisticated and striking look,” says Mondadori Sartogo.

Returning the pop-up to the table in a most beautiful and practical way are hand-blown Murano tumblers in red, blue and yellow. Marcoantonio Brandolini now runs the glassworks Laguna B in Venice, founded by his mother, the late Marie Angliviel de la Baumelle. “It’s really thin glass,” says Brandolini, who is the nephew of the decorator Muriel Brandolini. “You can feel the texture of the filigrana” — a special process for making colored glass — “and you can sense the passion of it.”

Brandolini is only 24, but he daily supervises two experienced glass-blowers. “This kind of artisanship is getting lost,” he says, which is why he was happy to do the tumblers exclusively for Cabana. “Martina is a great fan of ours; she uses the glasses at her home in London.”

The tumblers are further proof that, as Mondadori Sartogo says, “You can express yourself on the table just as dramatically as you can with the clothes you wear.”