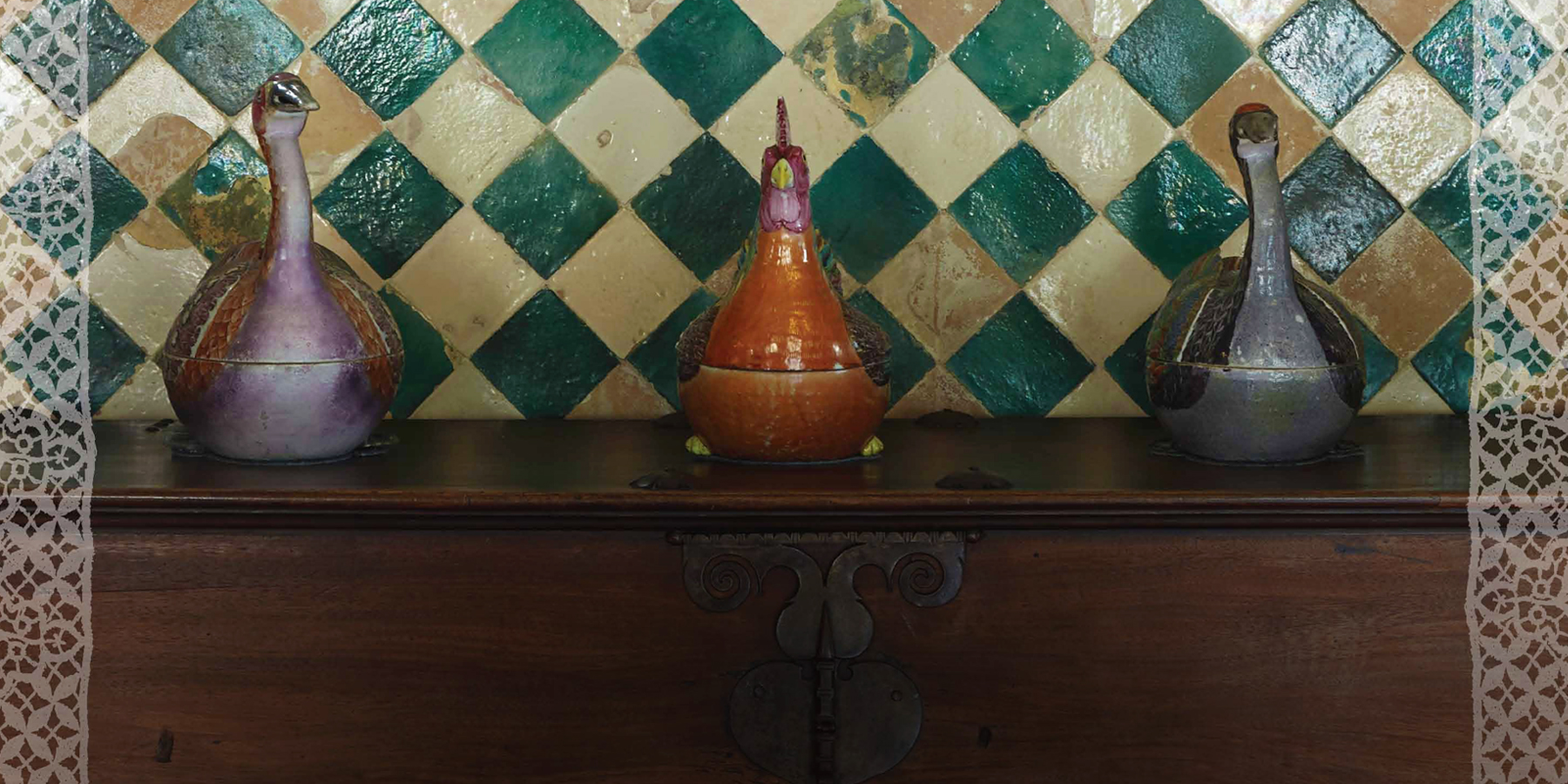 After just three issues, the international design magazine Cabana has become a coveted commodity, as much beautiful objet as must-read publication. Now Cabana's stylish founder, Martina Mondadori Sartogo, is offering pieces she's collected on her travels in a pop-up boutique at Milan's MiArt fair — and, for one month only, on 1stdibs. 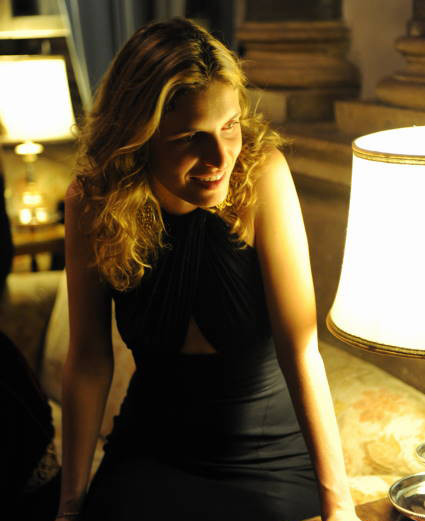 April 6, 2015Cabana magazine founder Martina Mondadori Sartogo has curated objects from her global travels for a pop-up boutique at Milan’s MiArt fair from April 9 to 13. The pieces will also be available online, exclusively through 1stdibs. Top: A detail of Lisbon’s Palacio Sintra from a story in the new issue of Cabana (photo by Miguel Flores-Vianna). All images courtesy of Cabana

Martina Mondadori Sartogo does not seem even slightly bothered when a visitor puts a water glass down on a pale wooden side table. “I like a house that is lived in, not done to the nines,” she says. “We love mess at Cabana.”

The Cabana in question would be the gloriously opulent magazine that the Milan-born and -raised Mondadori Sartogo founded last year, which gives a whole new meaning to the idea of a design publication. Its covers are made from designer fabric or wallpaper, and interior pages use different kinds of paper — from high-gloss to thick matte to transparent onion skin — depending on the subject at hand. As someone recently described it to Mondadori Sartogo, the semiannual Cabana is the haute couture of publishing, an art object in itself. “If you are going to do print, you might as well do it beautifully,” she says during a conversation at the house she shares with her husband, Peter, and their two children, Leonardo and Tancredi, in London’s chic South Kensington neighborhood.

Mondadori Sartogo has, as she puts it, print in her DNA. Her great-grandfather founded the Mondadori publishing company, today the biggest in Italy, in 1907, when he was just 18. Although Mondadori Sartogo’s father sold the company in the 1980s, he continued to serve on the board, with Martina taking his place in 2003 after his death.

But Cabana hasn’t remained entirely a print phenomenon. From April 9, the date that the third issue of the magazine will appear, through April 13, a Cabana-inspired pop-up shop at the MiArt modern and contemporary art fair in Milan will feature unusual and beautiful objects — also available on 1stdibs through April 30 — that Mondadori Sartogo has been assiduously collecting from flea markets, antique shops and contemporary craftspeople in Italy, London, Paris and Marrakech. Here, she talks about growing up with art-loving parents, the need to feel cozy and what she would pick from her pop-up. 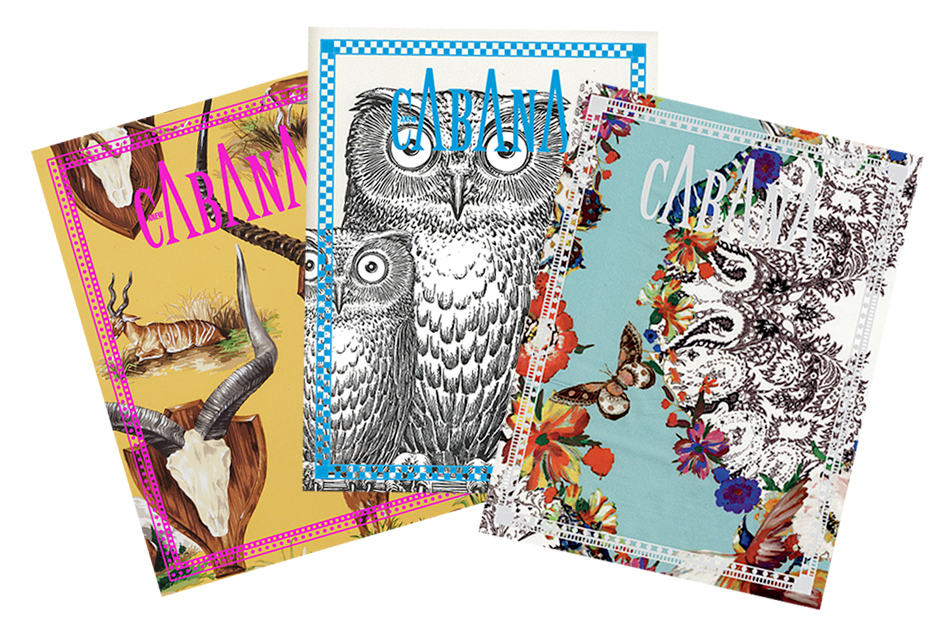 Mondadori uses actual wallpapers for Cabana’s covers, selecting for each issue a range of different designs from a single producer. The first issue (left) featured Pierre Frey patterns; the second (center), Piero Fornasetti for Cole & Son; and the just-released third, those from the Italian fashion house Etro. 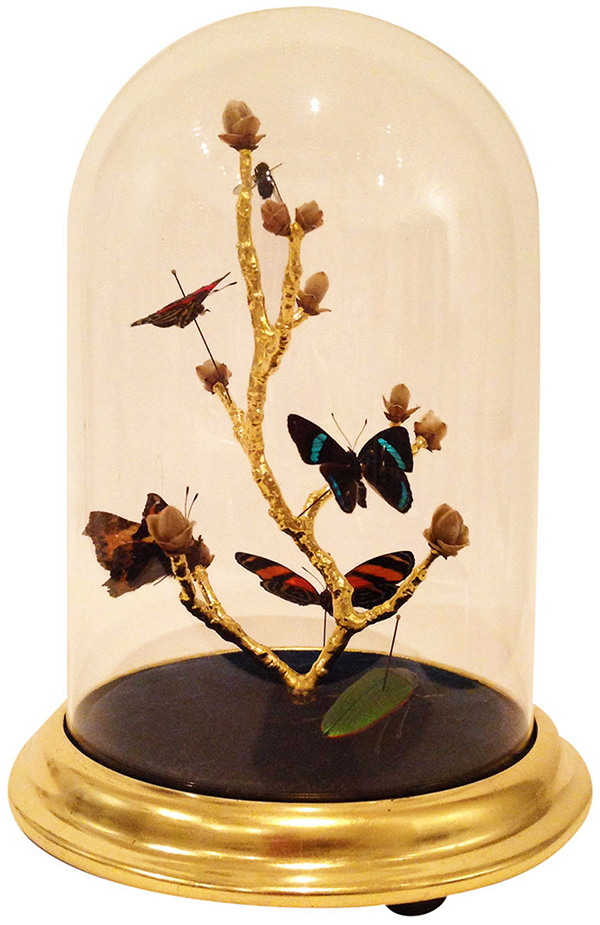 A 2014 piece by the Scottish artists Tennant & Tennant — comprised of a glass dome with a 23-carat gold base housing a gilded twig decorated with butterflies, insects and iridescent green beetle — is among the one-of-a-kind offerings in Cabana’s pop-up shop and 1stdibs storefront.

I’ve always been a very visual person. As a high school student in Italy, I did the liceo classico, which meant I studied Latin and ancient Greek, but also art history. Even my graduation thesis in philosophy was on aesthetics.

My father was a collector, not just of paintings, but of objects. I used to travel a lot with him, and we would go from tiny villages in Turkey to antiques shops in Paris; I think I got that eclecticism from him. My other inspiration comes from one of my mother’s best friends, the designer Renzo Mongiardino, who decorated the house I grew up in. His houses, his inspirations, the mood boards I would see in his studio, are behind every page of Cabana.

You were running a creative agency in Milan and had already founded a semiannual fashion magazine, Anew, when you started Cabana. What was the impetus?

It was like connecting the dots. A few years ago, I was in London and visited Frieze Masters [the spin-off of the well-known contemporary art fair that features works created before the year 2000]. I realized that every single object or artwork was about quality and beauty, which you can’t say about contemporary art, which is often about shock value. There were the obvious famous names but also wonderful discoveries, like stands with only Native American objects or medieval ivory miniatures. Never mind the latest artist launched in L.A. by Gagosian!

I was talking with Christoph Rudl, the art director of Anew, about this and about a gorgeous Rudolf Stingel exhibition I had seen at Palazzo Grassi in Venice — where he had covered the floors, ceilings, everything, using a wallpaper made from an antique kilim — and we agreed that there had been a shift. Perhaps since 9/11 and a difficult economic time, people wanted and needed to feel cozy again, to be in an environment that wasn’t the sleek, clean, cold design that had been so fashionable. 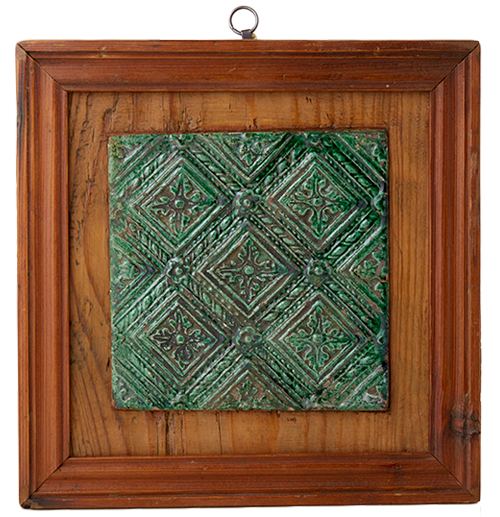 Several 15th-century engraved-ceramic Austrian tiles are among Cabana’s other offerings.

There are a lot of design titles out there, but they are all mass market and often country based. We thought, we’ll do something different: an interiors magazine that showcases a very specific mood without a defining country or style and with worldwide distribution. And we’d make it a beautiful object that is itself collectable.

Cabana is an extraordinary mix of topics, objects, visual essays, even email exchanges between you and your friend, design impresaria Ambra Medda. Contributors have ranged from Martino Gamper, Patrick Kinmonth and Christian Louboutin to Barnaba Fornasetti and Andrea Branzi. How do you put it all together?

A lot of it is by feel. There are some constant features. We always have a piece on collectable items. In the first issue, we did Ex-Voto religious objects and photographed them against antique rugs. We always do a story on a contemporary craftsman; in the second issue, we looked at a kimono-maker in Japan and illustrated every aspect of his process. We also do something unusual, which is to shoot rooms in six or seven houses in a specific city, and then blend them in one portfolio to create a kind of dream house. It has a more narrative, poetic quality than the usual design feature. Christoph’s experience and taste is so important, too; I can come up with an editorial idea like that, but he has to make it possible.

The fact that we are not a monthly magazine means we don’t have to show the latest item. We can be more inspirational, more detailed. It can be about the inspiration of a particular corner of a room, the color, the objects. We want to give the reader the tactile sensation of being right there. 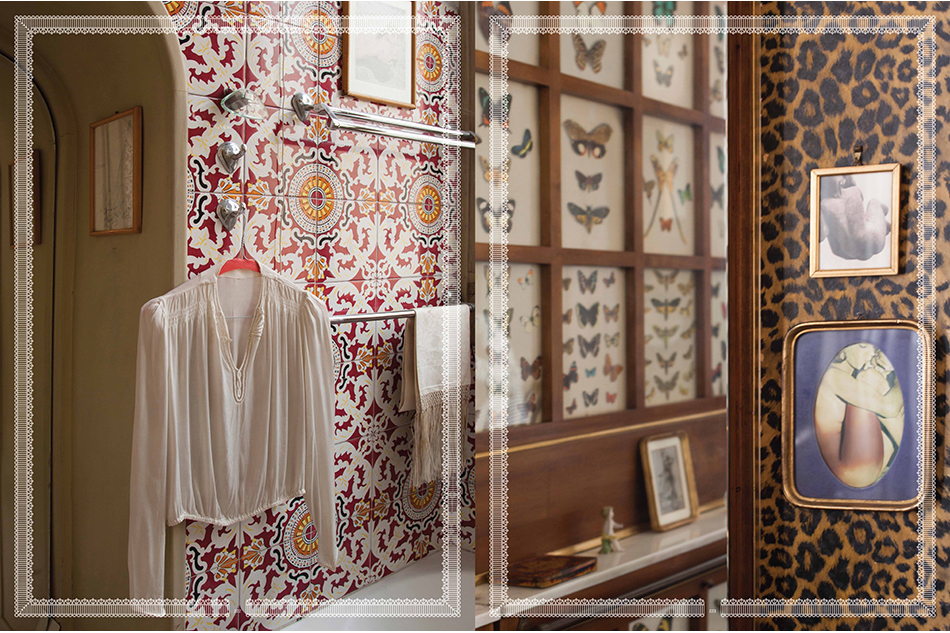 Mondadori’s just-released third issue of the semiannual Cabana features a portfolio of interiors from the Turin home of mid-20th-century Italian architect Carlo Mollino. 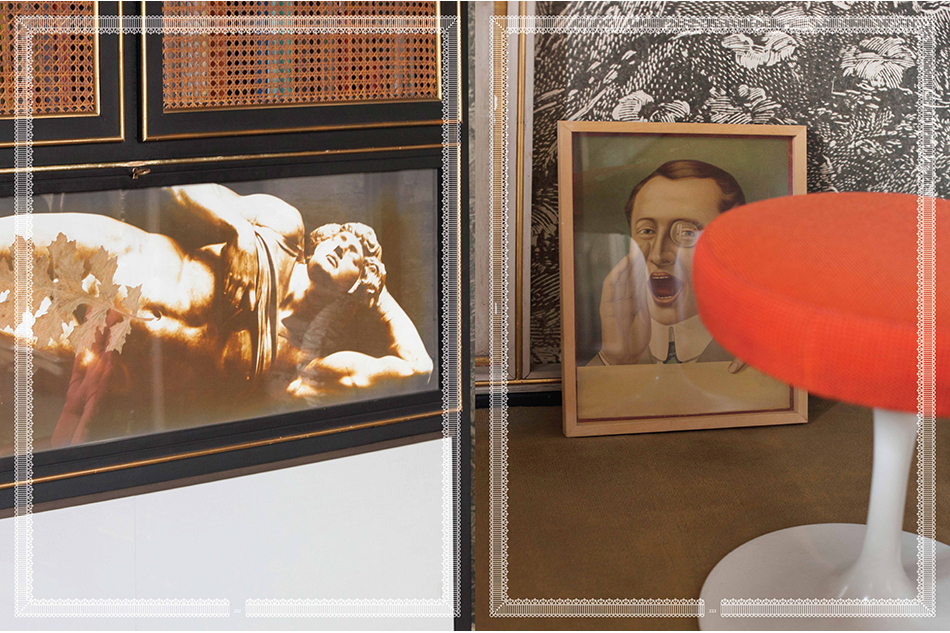 Milan-based photographer Giovanna Silva took the pictures for and wrote the short text accompanying the Mollino portfolio, which includes a variety of specific detail shots, in addition to those that show off entire rooms. 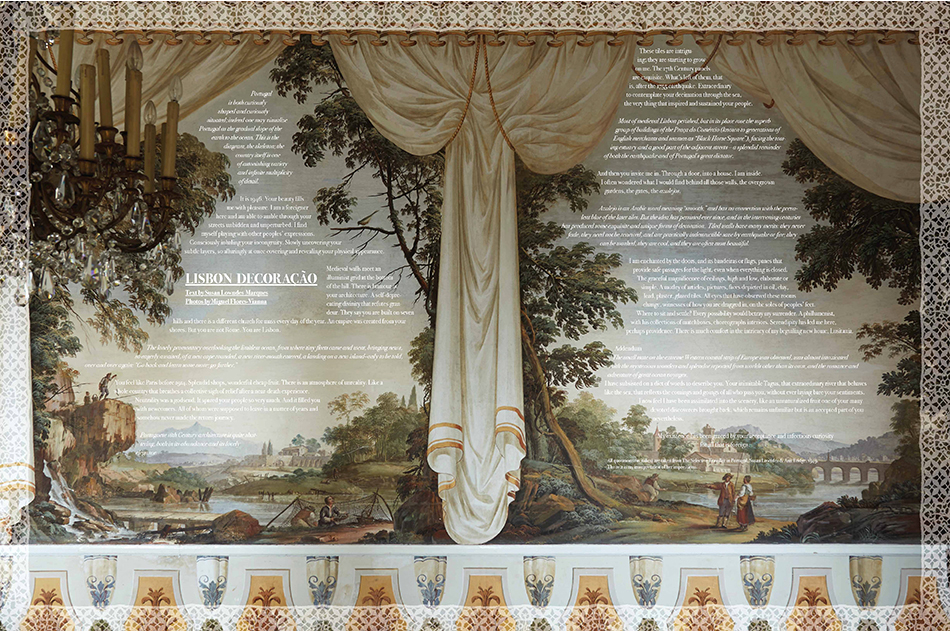 Another story in the new issue focuses on Lisbon, Portugal. Like other single-city portfolios the magazine has done, this one includes images of rooms from various homes, assembling them into a layout that creates what Mondadori describes as “a kind of dream house.” 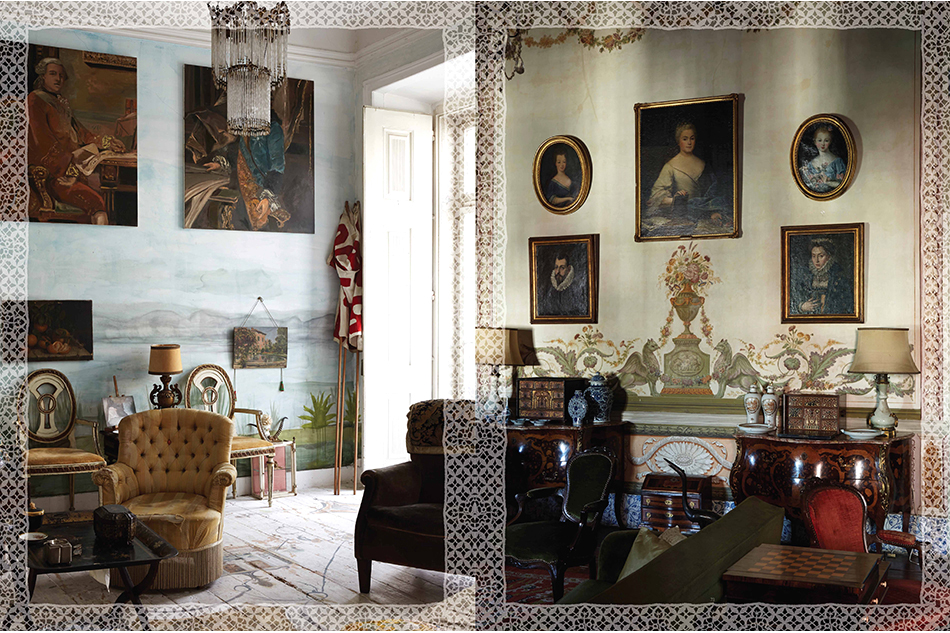 Noted interiors photographer Miguel Flores-Vianna shot the Lisbon portfolio, with much of the text accompanying it taken from writings by Susan Lowndes Marques, a British-born author and journalist who died in 1993, after living and working in Portugal for more than 50 years. 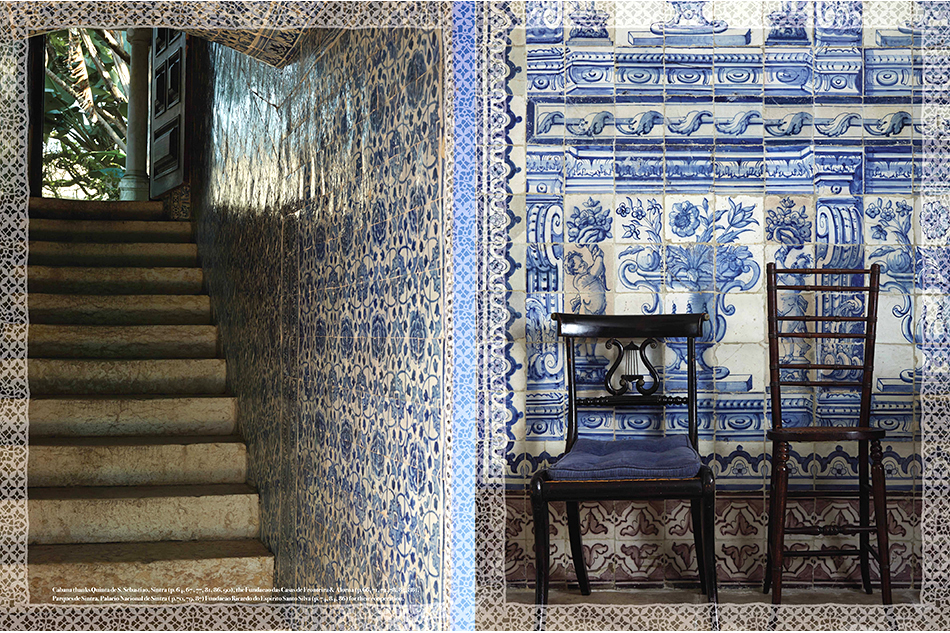 The Lisbon spreads show off a particular fascination with the hand-painted blue-and-white tiles — used to cover surfaces of all kinds — that are a signature of the city. 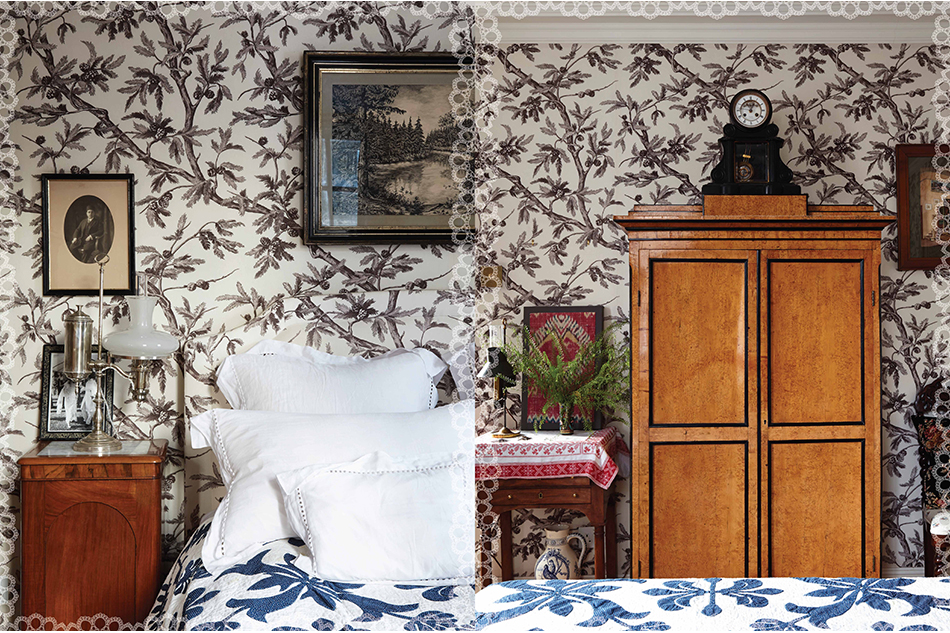 Flores-Vianna also shot the new issue’s story on a home in London’s Chelsea district belonging to Nathalie Farman-Farma, a textile designer and producer who makes pieces in the style of Central Asia and beyond. 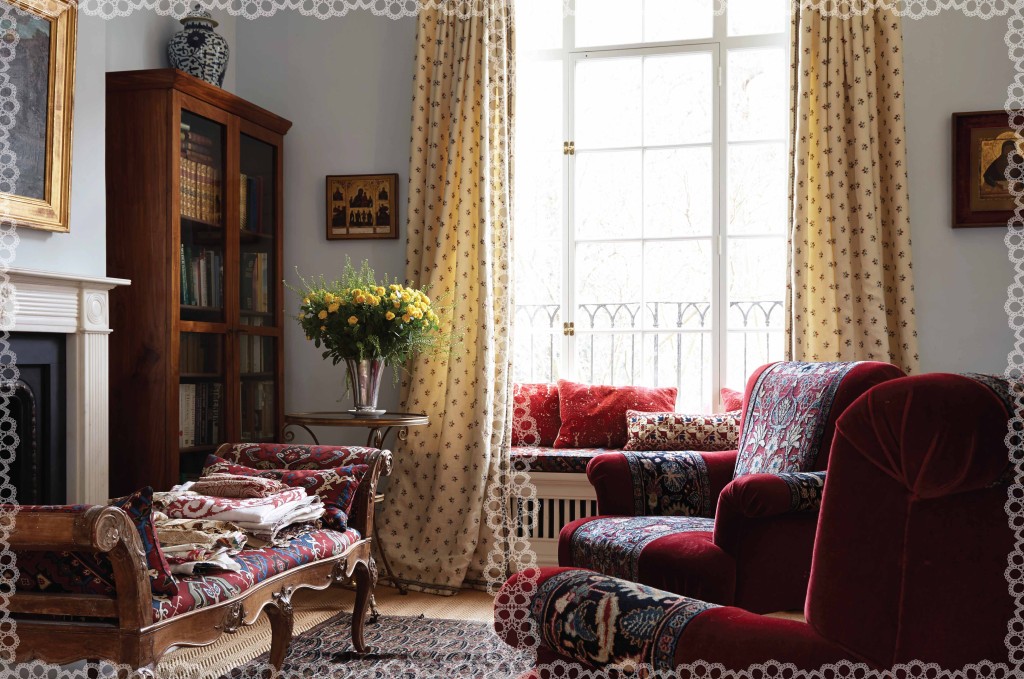 The Farman-Farma story was written by Angelica Hicks, daughter of British architect Ashley Hicks, who is himself the son of renowned 20th-century British designer David Hicks. She describes the home’s aesthetic as “the tale of a Parisienne, married to an Iranian, with a fascination for the Orient.”

“It’s like a cabinet of curiosities,” says the Milan-born and -bred Mondadori of the pop-up. She hopes to stage similar events in the future, perhaps to launch every successive issue of Cabana.

Why did you want to do a pop-up, and do you have plans for future ones?

I think there is some expectation now around the appearance of a new issue, and that’s how the idea of the pop-up shop happened. It’s a way of extending the Cabana experience and developing awareness of the brand. The magazine is like a shop window, and with the pop-up, you can bring people inside and provide an experience related to its style and identity. It’s like a cabinet of curiosities, so there are, for example, cushions by Rifat Özbek, objects by Stella Tennant and others selected for us by Duro Olowu. I hope we will do a pop-up every time a new issue comes out, wherever seems like the right place. Venice, maybe, or Los Angeles.

What are your favorite objects in the Milan pop-up and 1stdibs online shop?

I am always trying to create a story, so a lot of my favorite objects are things you can group together. I love a bunch of Bohemian enameled bottles that were made in the late 19th century for the Persian market. I found some in Marrakech, then more in London, and I now have several in my house. I also love tiles I found that were part of a 15th-century Austrian heating device; later blue-and-white tiles became popular, but these are green, which is very rare, and each one is different. I am also particularly fond of hand-painted dinner sets that I commissioned from a workshop in Milan. The designs are executed in four different colorways, and the idea is to mix them up. It’s so much nicer when everything isn’t perfect.

CLICK HERE TO VISIT CABANA’S 1STDIBS POP-UP SHOP; CHECK BACK ON WEDNESDAY 9AM (EST) TO ACCESS THE FULL INVENTORY 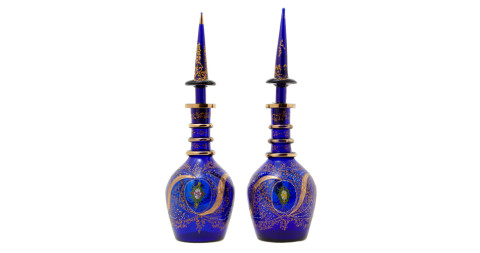 These lidded decanters were made in Bohemia in the late 19th century, created for the Middle Eastern market, most probably Persia. It is an immaculate pair. They are hand painted and decorated with floral motifs. 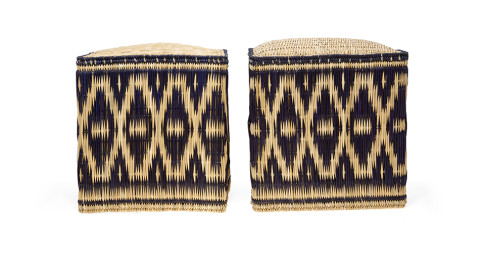 This pair of hand-woven pieces, with a naturally dyed decorative border and detailing, can be used as stools or small tables. They are made to order in Morocco, with an estimated delivery time of 60 days. 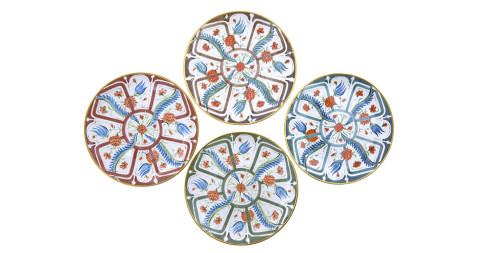 This dinner set is made to order and was created exclusively for the Cabana pop-up by Italian design house Laboratorio Paravicini. The plates come in dinner and dessert sizes and in four colorways: red, blue, green and brown, each with a hand painted gold border. The idea is to mix the four different colors in one setting. The design was inspired by an antique Iznik tile, and each plate is hand made, thrown on a pottery wheel one by one. 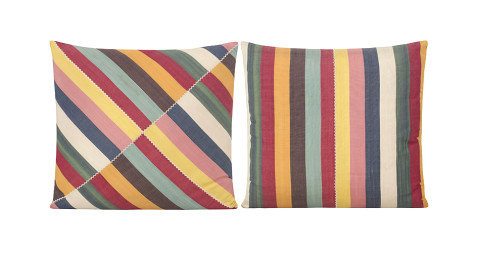 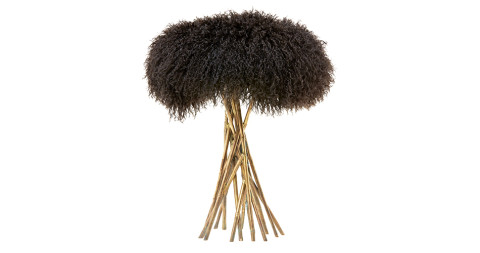 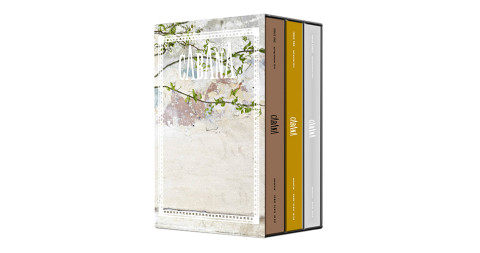 This is a limited edition (1 of 7) box made specially for the pop up store that includes the first three issues of Cabana.