The Master of Mobiles Comes to LACMA 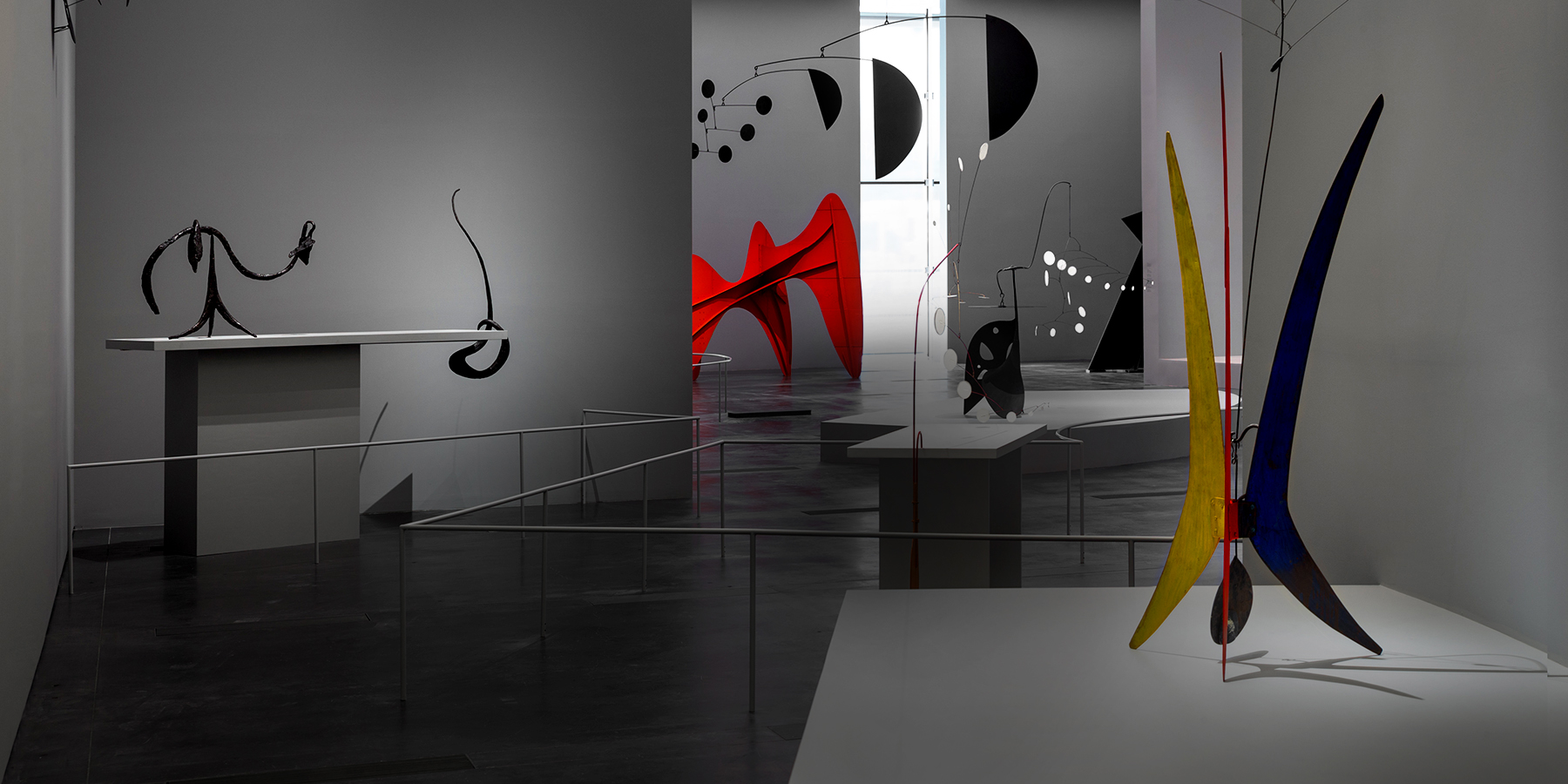 The Los Angeles County Museum of Art’s relationship with Alexander Calder dates to the early 1960s, but only now is the institution focusing on the artist’s modernist sculpture. Curator Stephanie Barron reflects on his avant-garde achievements. 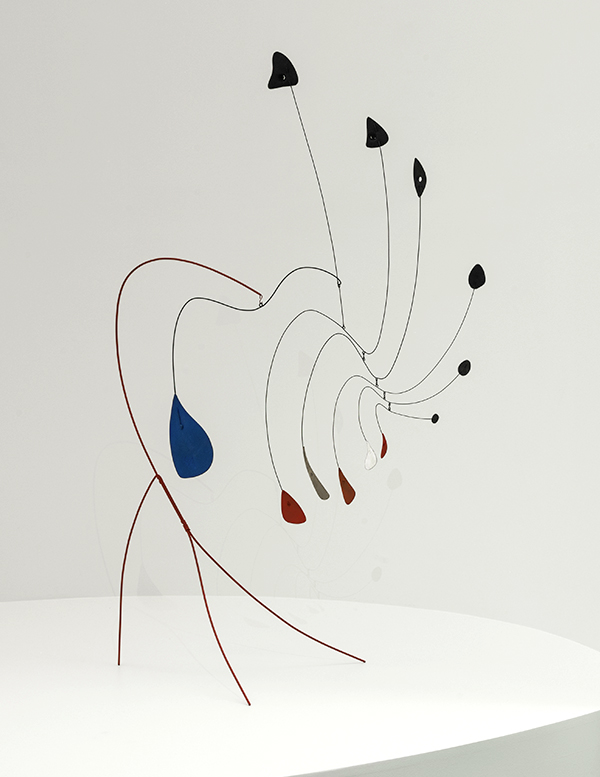 March 26, 2014“Calder and Abstraction,” now on view at the Los Angeles County Museum of Art, tracks the artist’s early and career-altering shift from figurative work to abstraction, and features his La Demoiselle, 1939. Top: An installation view of the show includes Yucca, 1941, in the foreground. All photos © Calder Foundation, New York, photo © Fredrik Nilsen.

As inspiration for “Calder and Abstraction: Avant Garde and Iconic,” on view at the Los Angeles County Museum of Art (LACMA) through July 27, the museum’s senior curator of modern art, Stephanie Barron, didn’t have to look further than the institution’s longstanding creative relationship with the world-renowned sculptor.

In 1964, LACMA commissioned Calder to create the large-scale mobile sculpture Three Quintains (Hello Girls) for its grand opening the following year. Originally designed as a site-specific fountain whose moving parts would be randomly choreographed by water jets in a pond on the museum’s grounds, the work was moved to a hillside in the museum’s sculpture garden and then loaned to the Art Center College of Design, in Pasadena. It was eventually returned to the Director’s Roundtable Garden at LACMA, where it now resides.

Reviewing the archives related to the fountain’s itinerant history, Barron realized that there had never been a major Los Angeles show devoted to Calder. To remedy this, she conceived an exhibition of just 48 works, including mobiles, stabiles and maquettes for larger outdoor works, each strategically selected to highlight the artist’s very early and career-altering move from figures to abstraction.

Born in Pennsylvania in 1898, Calder came from a family of noted but traditional figurative sculptors, and he grew up with some of America’s earliest modernists frequenting his home. He was a tinkerer and a science enthusiast who also happened to love art, and so he did the socially acceptable thing in the early 20th century and completed a degree in mechanical engineering (an education that would not be wasted on his later work), enrolling at New Jersey’s Stevens Institute of Technology. In 1926, a few years after graduating, he headed to France, where he befriended key avant-garde artists and thinkers and began using deftly bent wire to make his playful, and now well-known, circus characters. 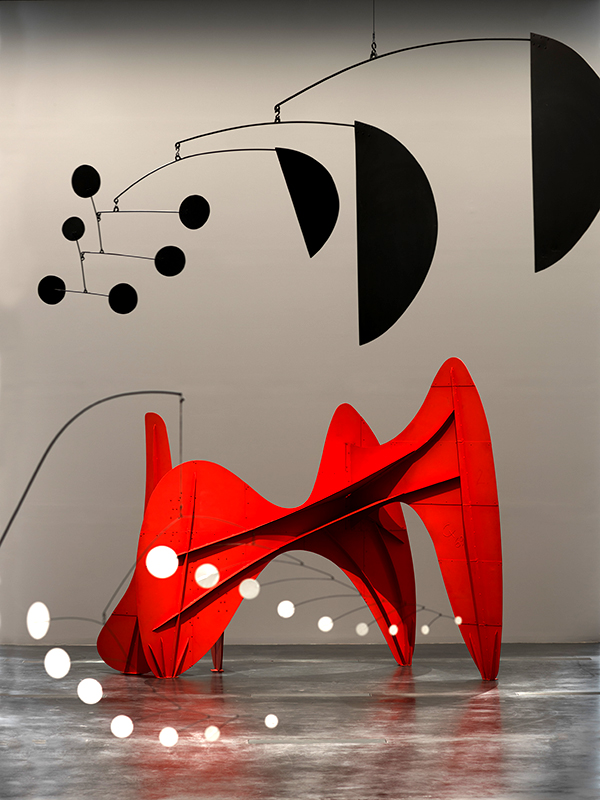 For the LACMA show, Barron decided to focus on the period shortly after the circus works of the late 1920s. This era saw a sea change in Calder’s career: Clearly influenced by Piet Mondrian’s hard-edged systems of color and Joan Miró’s amoeba-like surrealist forms, Calder abruptly stopped making figurative art of any kind and began instead to play with hanging and moving abstract shapes.

Calder wasn’t the first to incorporate motion into art, of course: Victor Tatlin and Marcel Duchamp did so earlier. But Barron suggests that Calder went beyond these influences to create something unique: moving art conceived to demonstrate — in playful but elegant ways — the constantly changing spatial relationships around us. To advance her view, Barron recruited the architect Frank Gehry, a frequent collaborator, to design the exhibit. Gehry’s scheme radiates from a centerpoint, with open nooks and areas choreographed to concentrate our attention on important groupings while remaining open enough to allow formal discoveries among more distant works.

“There may have been moving sculptures prior to Calder, but he single-handedly invented the mobile,” says Barron. Case in point: In one of his first abstract works, A Universe, 1934, Calder set ovals and metal lines in motion, using a motor to propel them. The result? Infinitely varied relationships between the overlapping shapes, their positive and negative contours and the shadows they cast. Duchamp, for his part, loved the works, dubbing them “mobiles.” The label stuck.

With the rise of Adolf Hitler, Calder returned to America, refining his ideas in gorgeous, whimsical pieces like Constellation, 1942, or Constellation with Two Pins, 1943, both of which are included in the LACMA show. By the 1960s, the artist’s accessible style had become the go-to choice for the most important public projects, including the LACMA fountain.

With the exhibition now in full swing, curator Stephanie Barron spoke with Introspective about her inspiration for the show, working with Frank Gehry and why the 1930s was such an important period for Calder’s work. 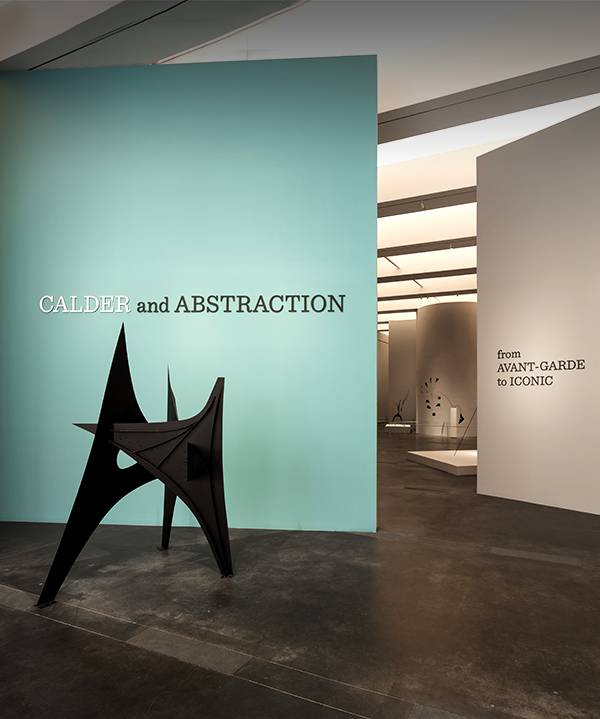 There have been major shows of his work at the Museum of Modern Art, the Guggenheim and the Met, but not here, despite LACMA’s long relationship with Calder. I decided it was time.

Are the works in this show borrowed from those institutions?

I was extremely fortunate that Calder’s grandson, Sandy Rower, who runs the Calder Foundation, was completely behind this and made very fine early works fully available to us. Then we filled in from major collections.

The show is refreshingly intimate. What prompted you to keep it at a relatively small scale?

I could have done a show of three hundred works that would take you three hours to see, and you would spend perhaps five seconds on each work, or I could select about fifty key works and give them the space they need. We were after a show that invited a slower kind of engagement.

What was the collaboration with architect Frank Gehry like?

I’ve worked with Frank on a variety of shows since the 1980s. He designed the “Degenerate Art” show featuring works censored by the Nazis, and, most recently, he did a gorgeous design for our Ken Price overview. Frank always responds brilliantly, freshly. He lets himself be inspired by the art and the premise. In the same way that his architecture is very sculptural and reflective of its context and site, he designs displays with the same creativity. 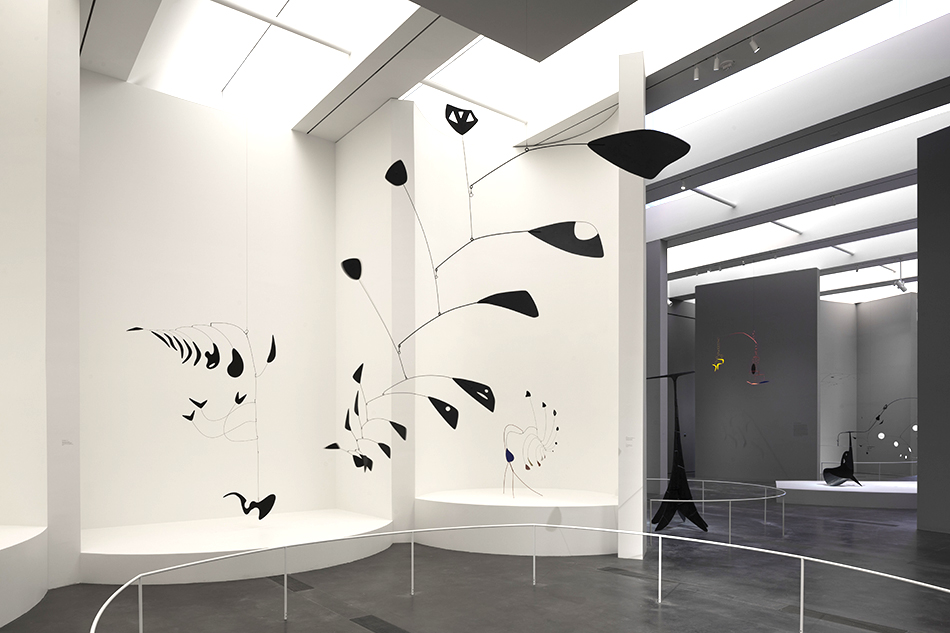 Calder’s knowledge of engineering and mechanics is clear in works like Little Face, 1962, in which a series of wing-like segments hang in effortless balance. At left, Eucalyptus, 1940, is thoroughly abstract yet evocative of bending stems, defying gravity and succumbing to it at the same time. 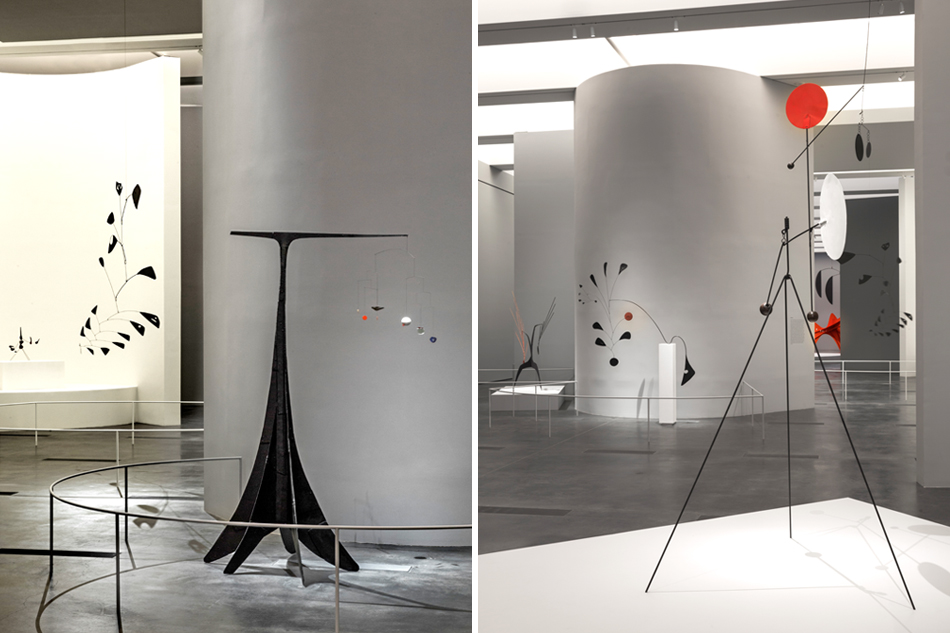 Left: One of Calder’s major breakthroughs was the creation of hanging sculpture. In Tree, 1941 (foreground), he suspends the mobile from the work itself. Right: Untitled, 1934 (foreground), one of the earlier works in the exhibition, shows Calder’s definitive move away from figuration. 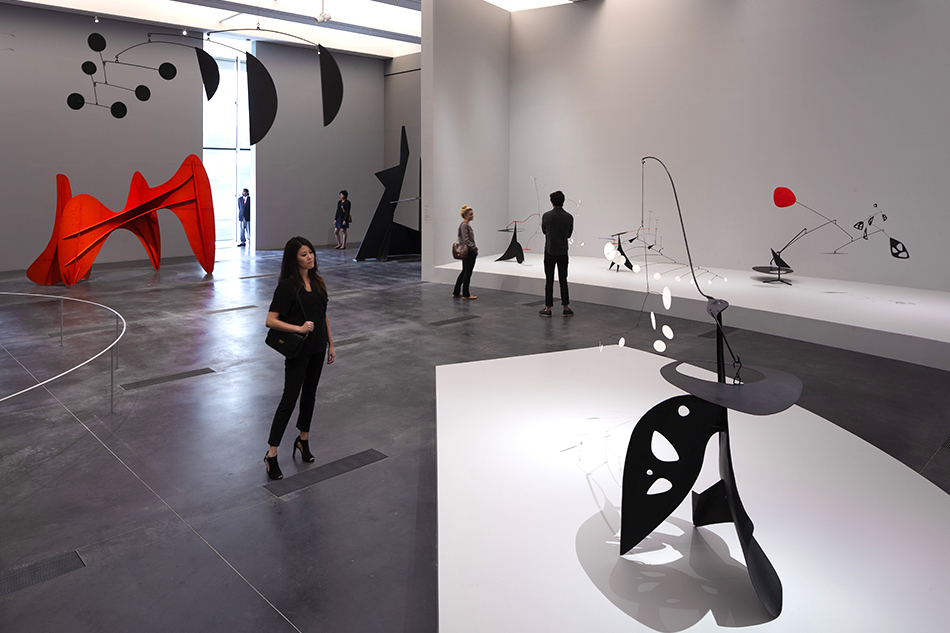 Focusing on Calder’s output during the 1930s, the exhibition firmly situates the sculptor among the cutting-edge creators of the 20th century. Duchamp, a noted fan, coined the term “mobiles” after seeing Calder’s work. 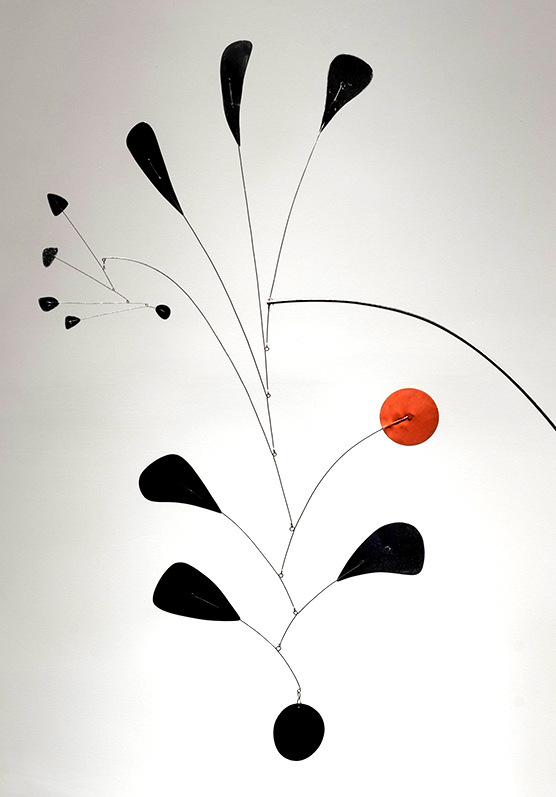 Red Disc, 1947, is a good example of how Calder drew with metal, creating three-dimensional works from lines and flat forms.

How did you approach this show together?

We decided that we wanted to slow down the looking so that viewers could make connections between and among the groupings and sightlines that Frank so beautifully orchestrated.

What inspired you to focus on this bracket of time in Calder’s career, starting in the very early 1930s?

I found the works that Calder made then were the most interesting, the most avant garde. They reflect the artist at his most curious, when he was experimenting with all the revolutions of modernity surrounding him in Europe at the time. Also, Calder, along with Henry Moore, moved very quickly into large public commissions. By the 1960s, as American modernity took off, Calder had become the sine qua non, must-have artist associated with large-scale abstract sculpture. I chose pieces demonstrating the exploration and imagination that got him to that late-career point.

When you step back and look at these 50 formative works with the benefit of hindsight, what do you see?

The Resnick Pavilion is the perfect open, generous space for seeing patterns. The presentation is chronological, so I see Calder, year after year, heading toward comfort with, and mastery of, materials, toward such formal clarity and visual beauty that today all the works feel historical and enduring.