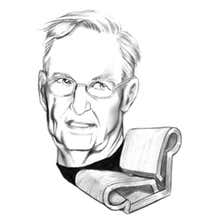 With magnificent buildings such as the Guggenheim Bilbao , Disney Concert Hall in Los Angeles and the new Foundation Louis Vuitton in Paris, Frank Gehry (b. 1929) has changed the nature and spirit of contemporary architecture. Yet the world’s best-known living architect has also enjoyed a prolific career as a designer of artful and functional objects, ranging from furniture to jewelry, that even at smaller scale are as lively and captivating as his architectural designs.

Gehry was born in Toronto and moved with his family to Los Angeles in 1947. He received a degree in architecture from the University of Southern California in 1954 and—after several years of casting about that included a stint in the U.S. Army and studies at Harvard — Gehry opened his architectural practice in L.A. in 1962. Idiosyncratic renovations to his small, traditional house in Santa Monica — such as cladding portions of the exterior in chain-link fencing and corrugated metal — drew attention to Gehry in architectural circles. Corporate and institutional commissions added to his reputation, culminating in the global acclaim that greeted the opening of the Guggenheim Bilbao in 1997. But the combination of visual dynamism and structural integrity expressed by that building had been evident for decades in Gehry’s designs. In 1972 he introduced a much-admired line of furniture he called Easy Edges. The curves and flowing lines of the pieces seem antithetical to the material are made from: cardboard—a presumably flimsy material that, when stacked, laminated and folded, is actually extraordinarily sturdy.

Many of Gehry’s designs feature an abstracted fish motif. For the architect, it is a symbol of vitality, strength and flexibility. The fish appears in a group of 1982 plastic lamps created for Formica (and exhibited by The Jewish Museum in New York in 2010). Gehry used the motif in crystal goblets for Swid Powell (1990), his Pito kettle for Alessi (1992) and as earrings for a 2006 jewelry collection for Tiffany that also includes torqued rings, necklaces and bangles. Gehry returned to furniture design in 1992 with a remarkably energetic line of furniture for Knoll with frames and seating made of bent, lightweight wooden strops. (The pieces have names, such as Power Play and Cross Check, derived from ice hockey.) In 2004, Heller released a group of twisted, faceted furnishings in molded polyethylene meant to evoke Gehry’s architecture. But — whether its tableware, jewelry, or furniture — all Gehry’s designs do that--sharing an animated aesthetic built on a solid foundational core. To possess a piece of Gehry design is to own one of his buildings, in miniature.

Iconic Designs from Frank Gehry
Explore timeless pieces that have earned their place in history. 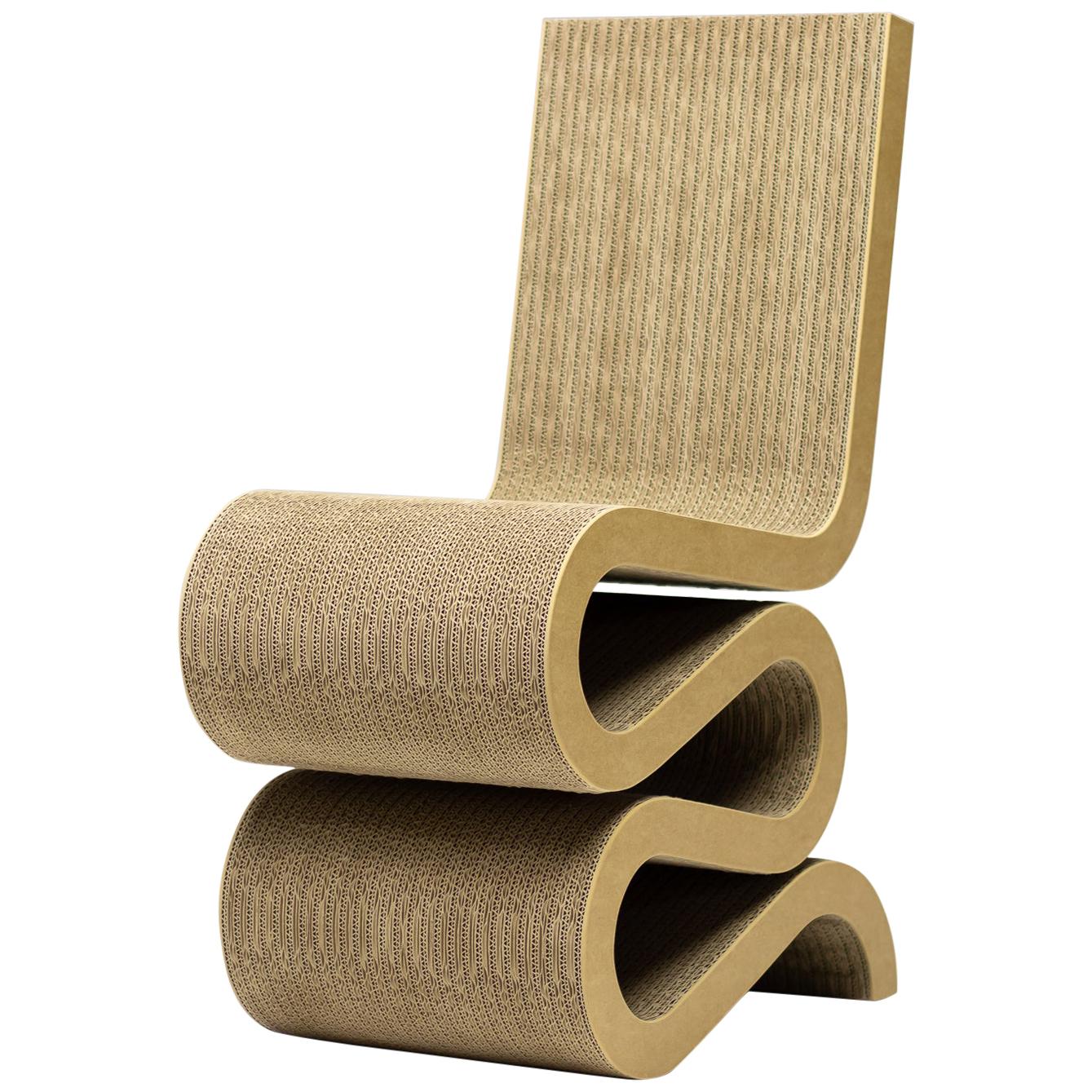 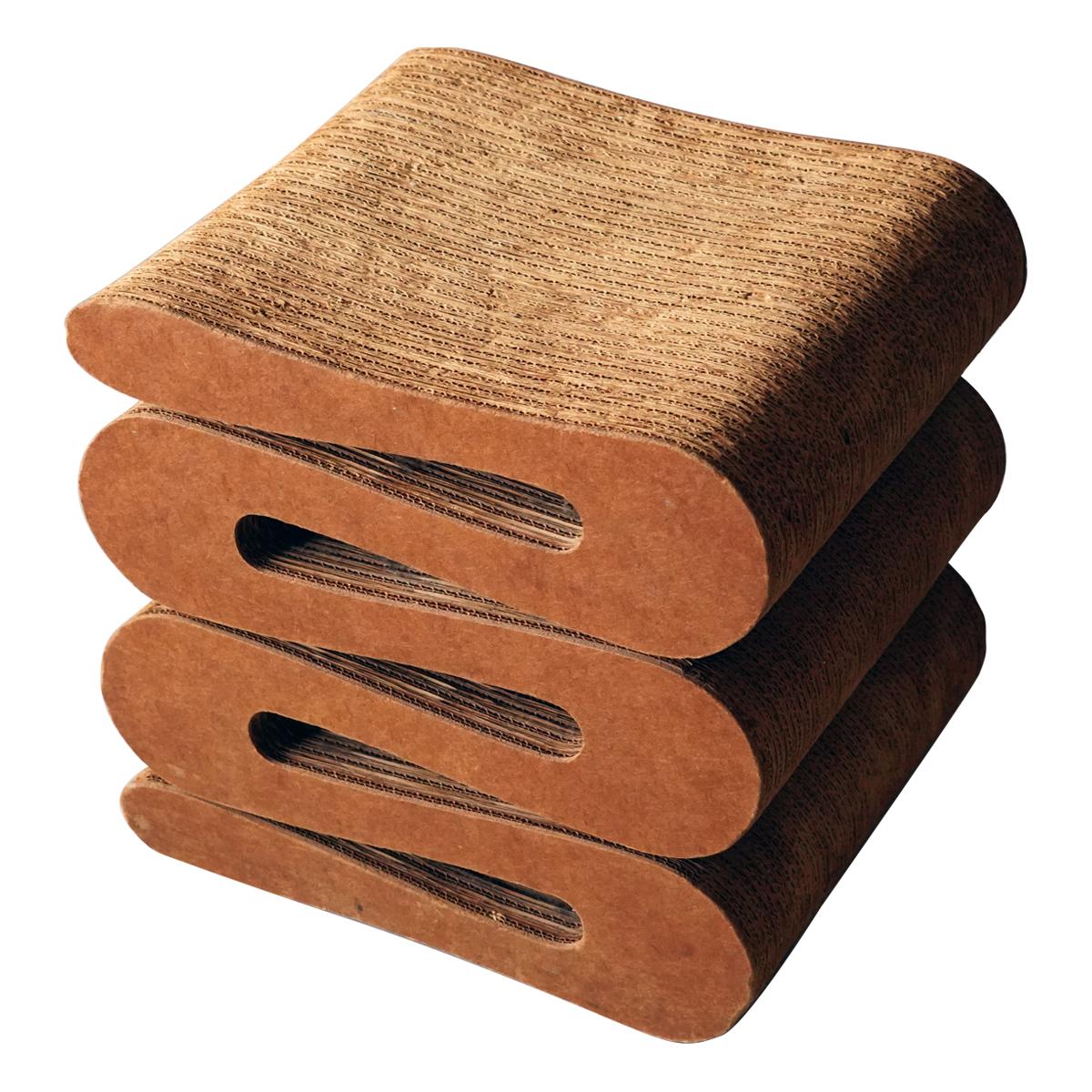 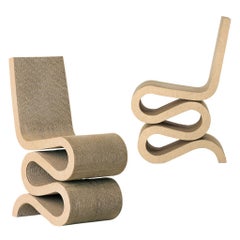 Pair of Frank Gehry for Knoll Cross Check Chairs
By Frank Gehry, Knoll
Located in Saint Petersburg, FL
Inspired by the apple crates he had played on as a child, Pulitzer prize-winning architect Frank Gehry created the ribbon-like design of the cross check chair with interwoven maple s...
Category

Easy Edges Table by Frank Gehry
By Frank Gehry
Located in Dronten, NL
Iconic early original Frank Gehry cardboard and masonite easy edges series table or writing desk. During the many years of careful use the shape of the base has slightly twisted as ...
Category

Off Side Ottoman / Wall Sculpture by Frank Gehry

Frank O Gehry, The Complete Works by Francesco Dal Co. Modern Architecture Book
By Frank Gehry
Located in Philadelphia, PA
One of the world’s great architects, Frank O. Gehry has produced an astonishing body of work. With the artistry of a sculptor and the brilliant articulation of an engineer, Gehry cre...
Category

Frank Gehry Custom Design Birch Plywood Dining Table for MIT
By Frank Gehry
Located in Portland, ME
In 2004, Frank Gehry designed the Ray and Maria Strata Center at the Massachusetts Institute of Technology, Cambridge -- including the interior spaces. This table was designed for us...
Category

Pair of Early Frank Gehry Easy Edges Wiggle Side Chairs, 1972
By Frank Gehry
Located in San Francisco, CA
A rare pair of early 1970s Wiggle side chairs by Frank O. Gehry from his innovative and iconic Easy Edges collection of cardboard furniture. Conceived in 1969 and launched in 1972...
Category

Frank Gehry Side Chair in Cardboard for Vitra Edition
By Frank Gehry
Located in Denton, MD
Gehry's experimentation with cardboard furniture grew from his extensive use of it in architectural models. To show the strength of the laminated cardboard material, he famously phot...
Category

Frank Gehry Side Chair in Cardboard for Vitra Edition 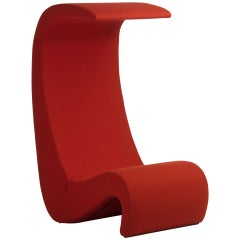 Previously Available Items
Dining Table and Four Chairs Designed by Frank Gehry for Knoll, 1997, USA
By Knoll, Frank Gehry
Located in Jersey City, NJ
"Face-Off" dining table with a white laminate top and maple base. Around the table are four "Hat-Trick" side chairs also in maple wood. The set was fabricated in 1997 by Knoll and ha...
Category

H 33.5 in. W 20 in. D 22.5 in.
Contemporary Modernist Frank Gehry Knoll Face Off Dinette Table Hat Trick Chairs
By Frank Gehry, Knoll
Located in Keego Harbor, MI
For your consideration is an extravagantly designed dinette set, including what is called a face off table and four hat trick armchairs, by Frank Gehry for Knoll, made in America, ci...
Category

H 34 in. W 14.25 in. D 26 in.
Maple Bentwood Cross Check Armchair by Frank Gehry for Knoll
By Knoll, Frank Gehry
Located in Boston, MA
Frank Gehry designed the Cross Check armchair in 1990 as part of his collection of bentwood furniture for Knoll. Inspired by the apple crates he played on as a child, the whimsical a...
Category

H 34 in. W 19 in. D 23 in.
Early Hat Trick Side Chair by Frank Gehry for Knoll
By Frank Gehry
Located in Boston, MA
Frank Gehry designed his lightweight Hat Trick side chair for Knoll in 1990, using strips of laminated maple veneer in a series inspired by traditional bushel baskets. We also have ...
Category

Early Hat Trick Side Chair by Frank Gehry for Knoll

H 33.5 in. W 23.38 in. D 22.25 in.
Dining Table and Four Chairs Designed by Frank Gehry for Knoll 1997, USA
By Knoll, Frank Gehry
Located in Jersey City, NJ
"Face-Off" dining table with a white laminate top and maple base. Around the table are four "Hat-Trick" side chairs also in maple wood. The set was fabricated in 1997 by Knoll and ha...
Category

H 33.5 in. W 20 in. D 22.5 in.
Frank Gehry, Easy Edges Cardboard Console Table, circa 1973
By Frank Gehry
Located in Doylestown, PA
A rare Frank Gehry console table in cardboard and masonite, from the Easy Edges collection, circa 1973, in very good original condition. The table was won in a charity auction and im...
Category

H 26 in. W 60 in. D 15 in.
Dining Table & 4 Armchairs by Frank Gehry for Knoll Signed & Dated 1994 USA
By Frank Gehry
Located in Jersey City, NJ
The "Face Off" dining table and the four "Hat Trick" armchairs were designed in 1992 by Frank Gehry and produced by Knoll.
Category

H 29 in. Dm 36 in.
Cross Check Bent Plywood Arm Chair by Frank Gehry for Knoll
By Knoll, Frank Gehry
Located in Boston, MA
This exquisite sculptural chair won Time Magazine’s award for best design 1992. This example was produced in 1993 and is signed and dated. Though this chair is still in production...
Category