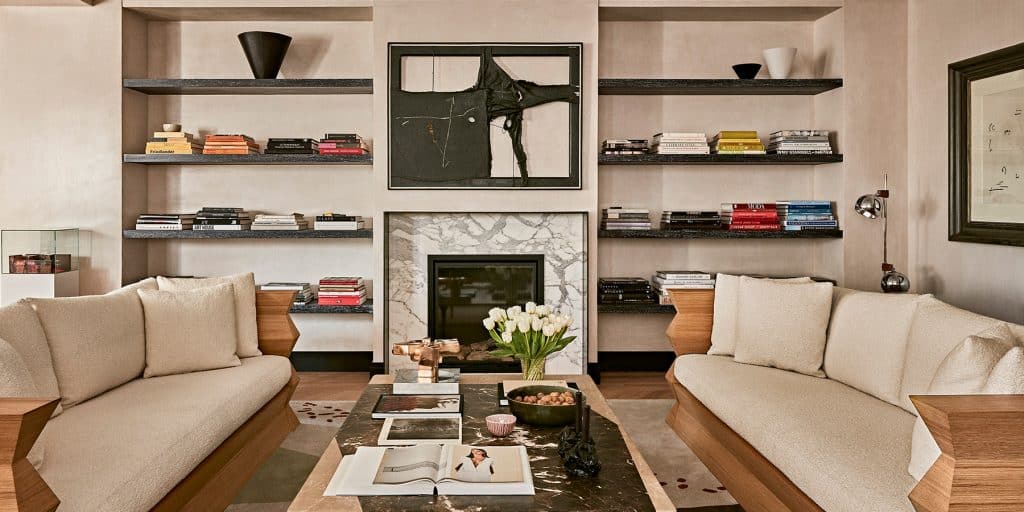 The Madrid studio of Gonzalo Machado and Mafalda Muñoz handles homes for the most fashionable clients. 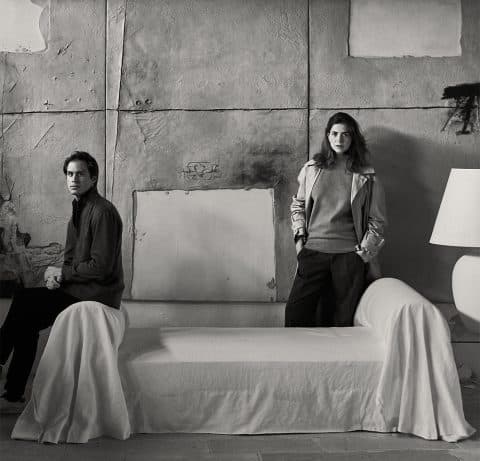 February 16, 2020Husband and wife Gonzalo Machado and Mafalda Muñoz set up their Madrid interiors studio, Casa Muñoz, in 2014. Top: One of their first commissions was the home of Spanish supermodel Eugenia Silva, in whose living room they placed a Manolo Millares artwork, a Von Pelt coffee table (which the designer created especially for the duo’s now-closed gallery) and sofas of their own design. All photos by Gonzalo Machado

Shortly after launching their Madrid-based interior design firm, Casa Muñoz, in 2014, Mafalda Muñoz and Gonzalo Machado landed a plum job. They were commissioned by Spanish supermodel Eugenia Silva to decorate her new apartment: a 3,800-square-foot space in a 1950s building overlooking the city’s Parque del Oeste. She gave them carte blanche. “Their talents put together are a fantastic combination,” say Silva. “I really wanted their vision.” The result is decor marked by a neutral palette, strong architectural lines and an intriguing mix of furnishings. These include a sculptural, easel-like wooden chair created circa 1990 by Italian designer Anacleto Spazzapan, purchased on 1stdibs, as well as a mobile-like pendant light by Michael Anastassiades in the library, a Claude Lalanne–inspired metallic chair in the master bedroom and a series of graphic marble stools by Alvaro Catalán de Ocón. There are also artworks by the likes of Louise Bourgeois, Donald Baechler and Antonio Saura. “For me, the house is very masculine,” says Muñoz. “It doesn’t look like a supermodel lives there.” 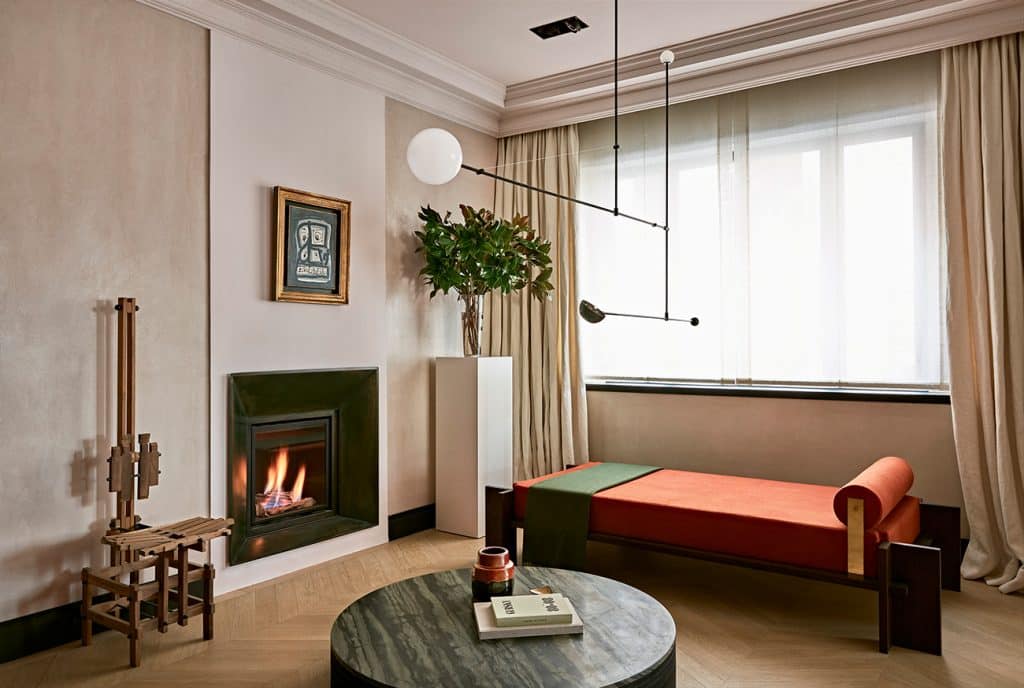 In the library of the Silva residence, a Michael Anastassiades pendant lamp hangs above a coffee table and daybed of Machada and Muñoz’s own design and a sculptural wooden chair by Anacleto Spazzapan, purchased on 1stdibs. The work above the fireplace is by Antonio Saura.

Together, the husband and wife project a glamorous presence on the Madrid design scene. “They are so smart and good-looking they are almost unbearable,” quips Daniel Garcia, the director of the Spanish edition of Icon Design magazine. Adds Paris-based decorator Cyril Vergniol, “Mafalda is like a sun. She’s always lively and smiling.” Photos of the couple’s 2013 wedding were published in the local edition of Vanity Fair, and their names appear with regularity on the pages of Spanish society magazines. 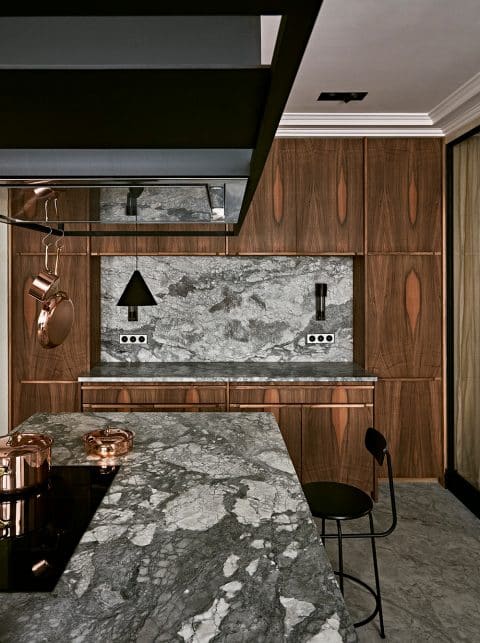 The home’s kitchen, the designers explain, was realized in materials that match those used in the rest of the house, so it complements the other interiors.

Machado initially trained in industrial design, at the Istituto Europeo di Design Madrid, but he became disillusioned with the standard of the course and dropped out after a year. He turned his hand to photography instead and was soon employed as an assistant to Mario Testino. His very first assignment with the Peruvian lensman, in 2005, was for American Vogue; they shot in Venice with über-stylist Grace Coddington and Russian supermodel Natalia Vodianova. “It doesn’t get much better than that,” Machado says over coffee at the Casa Muñoz offices. He went on to work on his own for such titles as AD France and GQ Spain. He still takes pictures, recently shooting a portrait of architect Sir Norman Foster’s wife, Elena, for Vogue Spain. According to his wife, Machado’s experience behind the camera has given him a particular gift for interior design: “He has a real eye for seeing spaces and proportions,” explains Muñoz, who met and began dating Machado when they were both teenagers (they married in 2013). “He can project the image of what a project will look like before we start.” 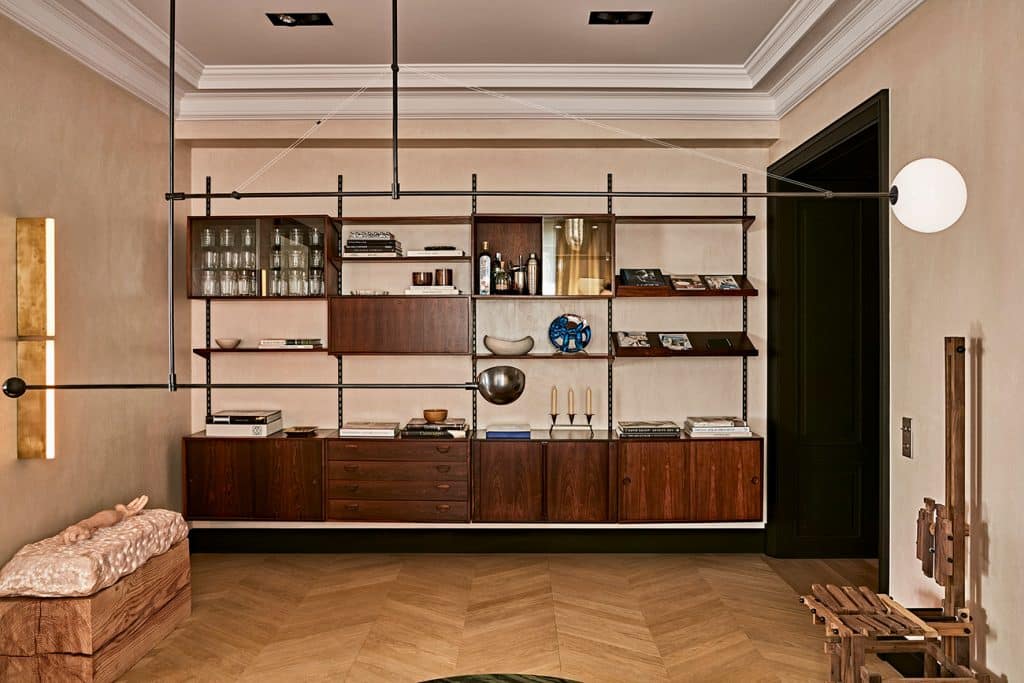 Elsewhere in the library, a Kai Christensen shelving system wall unit from MORENTZ forms a backdrop for the Spazzapan chair and a stone sculpture by Louise Bourgeois. 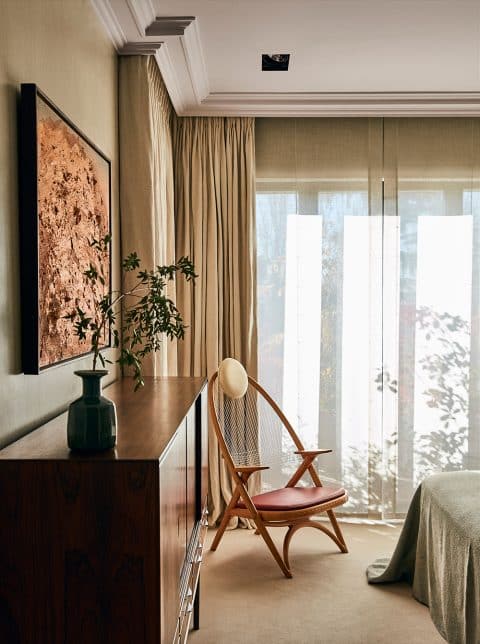 An artwork by Miquel Barceló hangs over a Danish cabinet next to a Helge Vestergaard Racket chair in a bedroom.

Muñoz herself has been steeped in the world of interiors since birth. In fact, the upholsterer the duo used for Silva’s apartment made Muñoz’s cradle. Her French-born mother, Sabine Déroulède, is a decorator, and her late father, Paco Muñoz, is an icon of Spanish design, founder of the home decor companies Casa y Jardin, in 1951, and Darro, in 1959. “Back then, there was no culture of interior design in Spain,” says Muñoz. “Nothing. It was like a desert.” Casa y Jardin, for its part, grew to 300 employees, produced some 20,000 furniture designs and had a client list that included the royal who is today king of Spain. The opulent family home where Muñoz was born was even featured on the October 1977 cover of American Architectural Digest. She herself trained in interior design at the Escuela Técnica Superior de Arquitectura de Madrid and also earned a degree at Christie’s in London, after which she spent two years working in Vergniol’s Paris office. At the time, he was busy decorating the guest rooms at the Hôtel de Crillon, on Place de la Concorde. 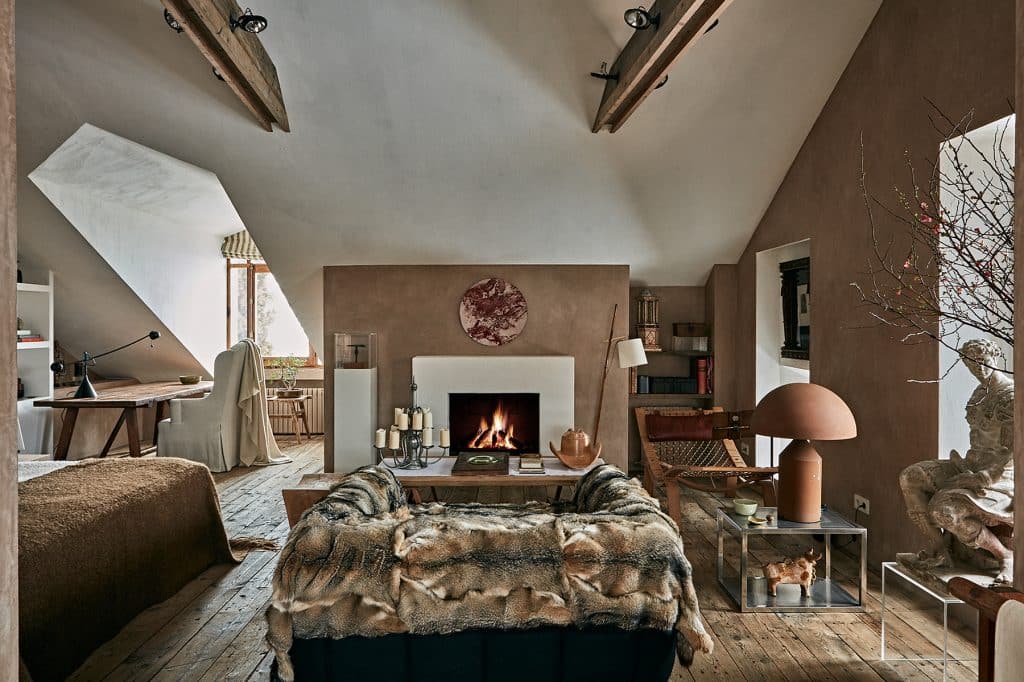 The couple decorated their own apartment in the Muñoz family’s country home, in Pedraza, north of Madrid. In front of the fireplace, they set a 1970s sofa designed by Muñoz’s father, Paco, a legend of late-20th-century Spanish design, pairing it with a Hans Wegner hammock chaise longue and a metal coffee table from Casa y Jardin topped by a Vico Magistretti Atollo lamp.

Her time in Paris, from 2012 to 2014, coincided with Machado’s living and working there as a photographer. On their return to Madrid, six years ago, she and Machado not only set up their own interiors studio, they also opened a contemporary design gallery, Machado-Muñoz, in the Chamberi district. “It was groundbreaking, something unheard of in Spain,” says Icon Design editor Garcia. Their first exhibition, in February 2015, paired the work of London-based Anastassiades with lighting, furniture and photographs by French artist and craftsman Philippe Anthonioz. (He is perhaps best known for cast-bronze pieces reminiscent of those of Diego Giacometti, with whom he collaborated in the early 1980s.) The catalogue impressively included an interview with Anastassiades and Anthonioz conducted by the celebrity Swiss art curator and critic Hans Ulrich Obrist. For the brochure that accompanied another show, “Still Life – Apartamento,” they persuaded the British designer Jasper Morrison to write a foreword. Over the next few years, Machado-Muñoz showcased the work of both budding international stars (Fredrikson Stallard, Von Pelt, Anton Alvarez) and homegrown talent (Catalán de Ocón and Lucas Muñoz Muñoz, who happens to be Mafalda’s cousin). They closed the gallery in July 2018 but are planning to revive it in a different form this May. The couple is currently renovating a grand second-floor flat close to the Paseo de Recoletos whose front rooms will host a showroom and gallery space while the rear part will serve as a family home for them and their two young children, Paco and Maxima.

Next to the bed is a nightstand of their own design, made of Piedra de Sepulveda stone, on which sits a Carla Venosta table lamp. To the right is a 17th-century Spanish walnut desk topped by a Calder lamp by Enrique Franch Miret for Metalarte. The wingback chair at the desk, also by the couple, is upholstered in linen.

The Casa Muñoz offices, where they work with a team of eight, are a short walk away. The decor there includes a small table by Fredrikson Stallard, a vintage Adrian Pearsall sofa, a brass floor lamp by Paavo Tynell and a jute tapestry on the wall by the late Catalan artist Aurèlia Muñoz (no relation).

Asked to describe their overarching aesthetic, the couple demurs. “Style in interior design is something I have problems with,” says Muñoz. “I think the houses that are beautiful do not have a style.” That said, the interiors they create have a number of common denominators: a generally neutral palette, lots of textural raw finishes and a pleasing mix of antiques, 20th-century design and contemporary furnishings. “You can feel restraint, but indulgence too,” Garcia says of their work. “There is something plush, warm and traditional, but also edgy and raw, in everything they do.” 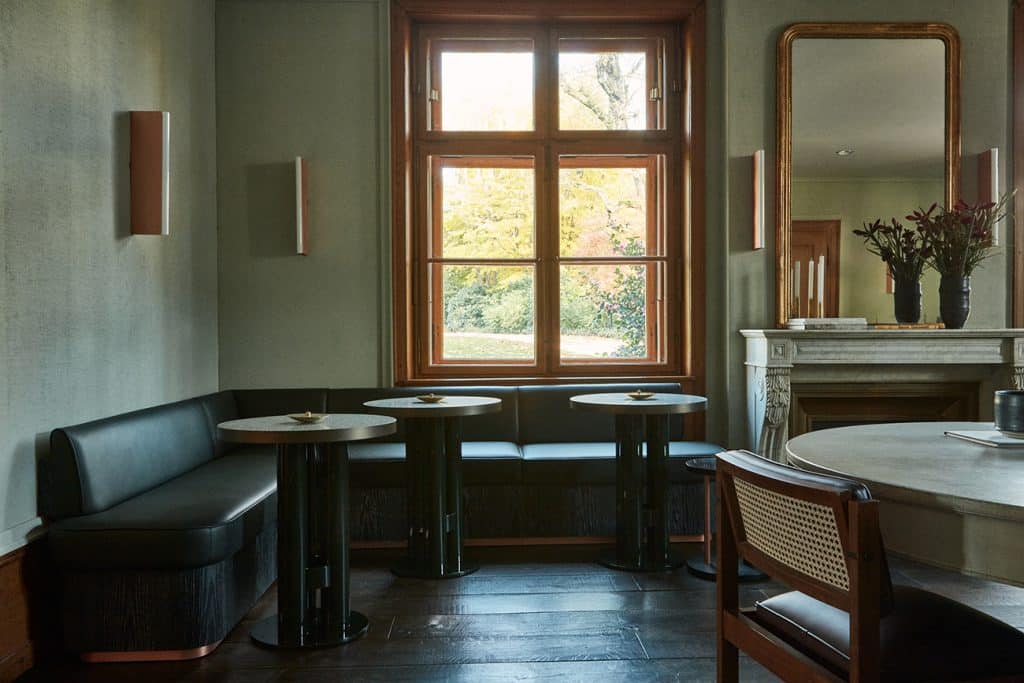 For the new restaurant at the Beyeler Foundation, in Basel, Switzerland, which opened this past November, Machado and Muñoz selected more lighting by Anastassiades plus a 19th-century Swedish center table (at right). The couple created the chair at the table based on one made by Darro, the Spanish design company founded by Muñoz’s father. The banquette and the lacquered terrazzo-topped café tables are their own design. 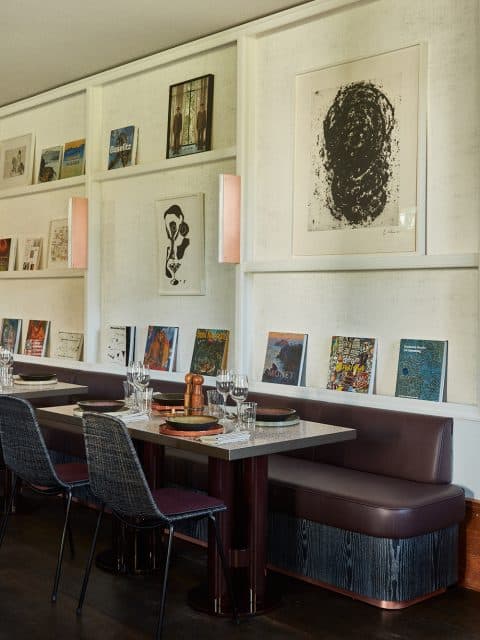 The couple decorated the walls of the Beyeler restaurant with prints from the foundation’s collection. The chairs were designed in the 1960s by Swiss architect Gian Franco Legler.

The couple’s own apartment on the top floor of the country house of Muñoz’s family, in the medieval village of Pedraza, north of Madrid, is a perfect example. They installed an 18th-century wood floor salvaged from a convent in Segovia, gave the walls and ceiling a limewash finish and furnished it with a varied mix of pieces, including a Spanish 17th-century walnut desk, a 1970s Paco Muñoz sofa and a Vico Magistretti Atollo lamp. The overall look is strangely reminiscent of both an alpine chalet and an Axel Vervoordt interior.

Neither Muñoz nor Machado has a predefined role in their collaborations, although she tends to oversee the more technical aspects. “I enjoy taking care of the problems and solving them on site,” Muñoz says. Among their commissions to date are an apartment on New York’s Madison Avenue and some projects in Switzerland, including a chalet in Gstaad and the new restaurant at the Beyeler Foundation, in Basel, which opened last November. The calmly sophisticated dining room features leather benches, Douglas fir tables, copper-alloy sconces developed in collaboration with Anastassiades and jute-covered walls. Currently on the drawing board are the renovation of a 16th-century house in Pedraza; several projects on Mallorca, not least a 48,000-square-foot villa; a new-build house designed by celebrated Spanish architect Emilio Tuñón to the north of Madrid; and two flats in the center of the city. 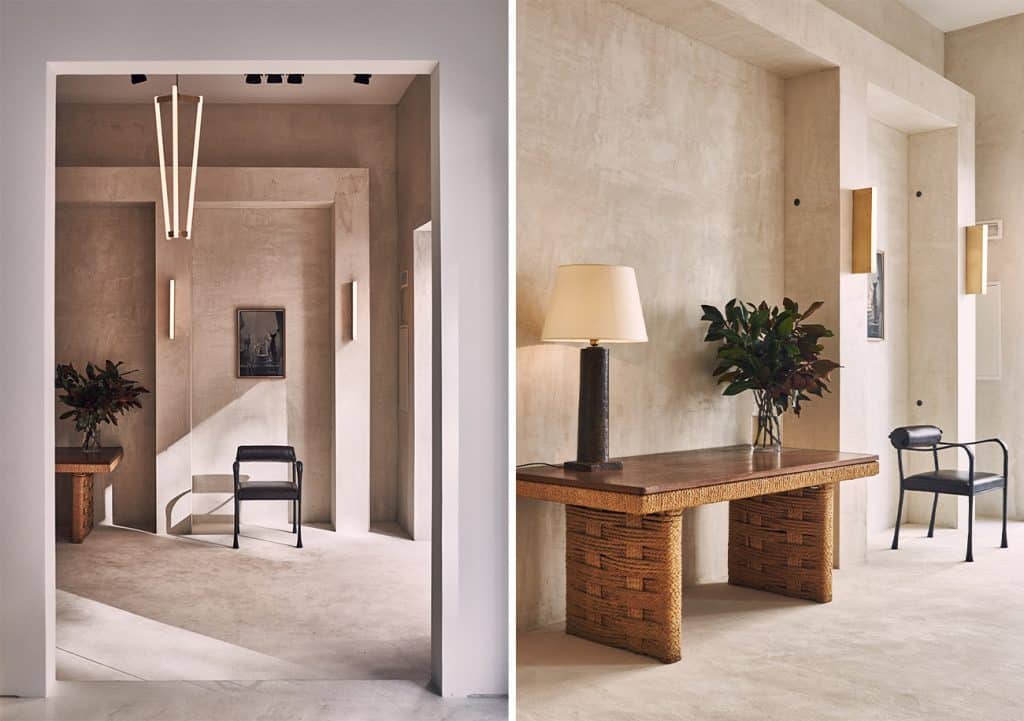 Left: The first show in the couple’s design gallery celebrated the lighting of Anastassiades and the work of French artist and furniture designer Philippe Anthonioz, one of whose photographs hangs above a chair of his design. Right: An Anthonioz lamp sits atop a table by Adrien Audoux and Frida Minet.

With so much going on, the Muñoz family’s design star seems guaranteed to continue shining brightly as the couple’s work adds to an already proud heritage. “Mafalda has lived in beautiful surroundings her entire life,” says Eugenia Silva. “So, she knows very well what a good house needs.” Adds Garcia, “They are not afraid of letting their taste and heritage show. Paco Muñoz was one of the pioneers in modern decoration in Spain. That sticks and only adds to all the other qualities Mafalda and Gonzalo have.” 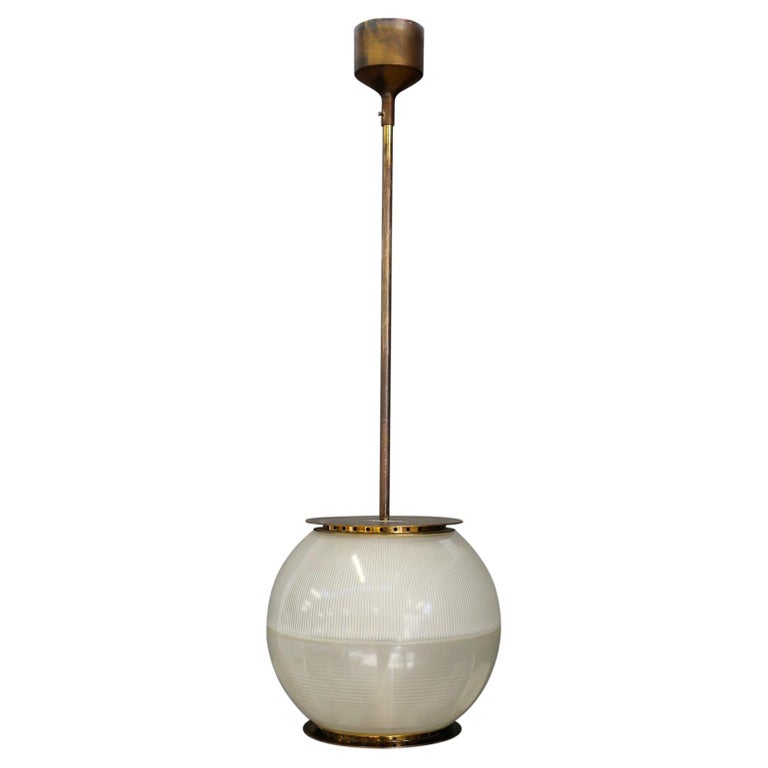 “Iconic design. Perfect for a kitchen” 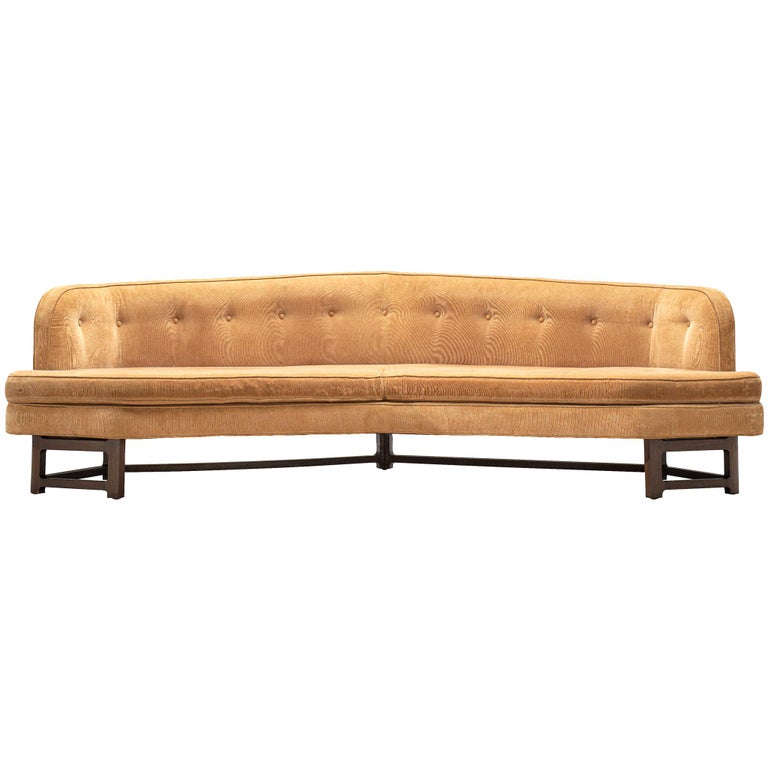 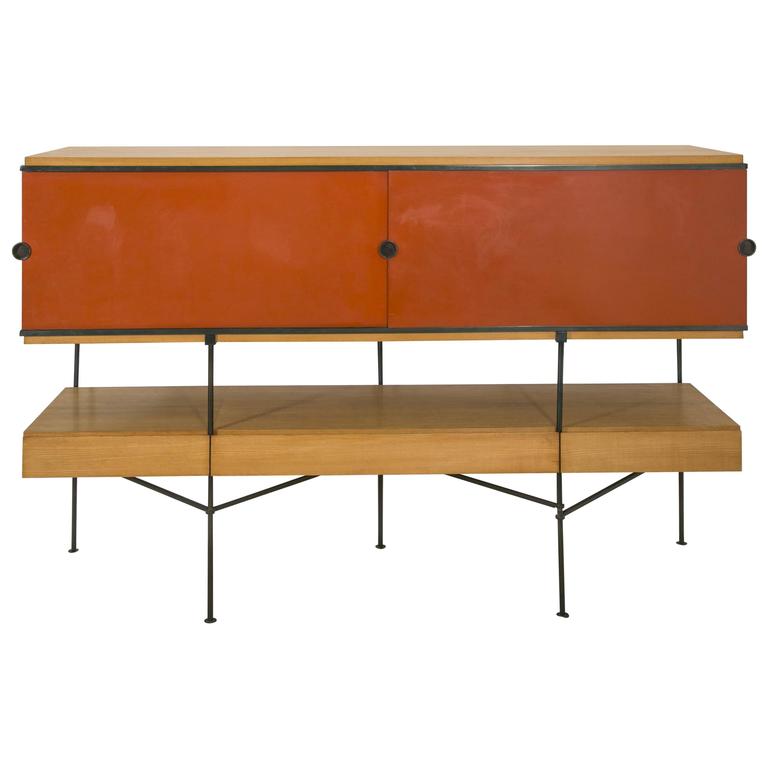 “We have fascination with French designers, and this particular piece should help anyone understand why that is.” 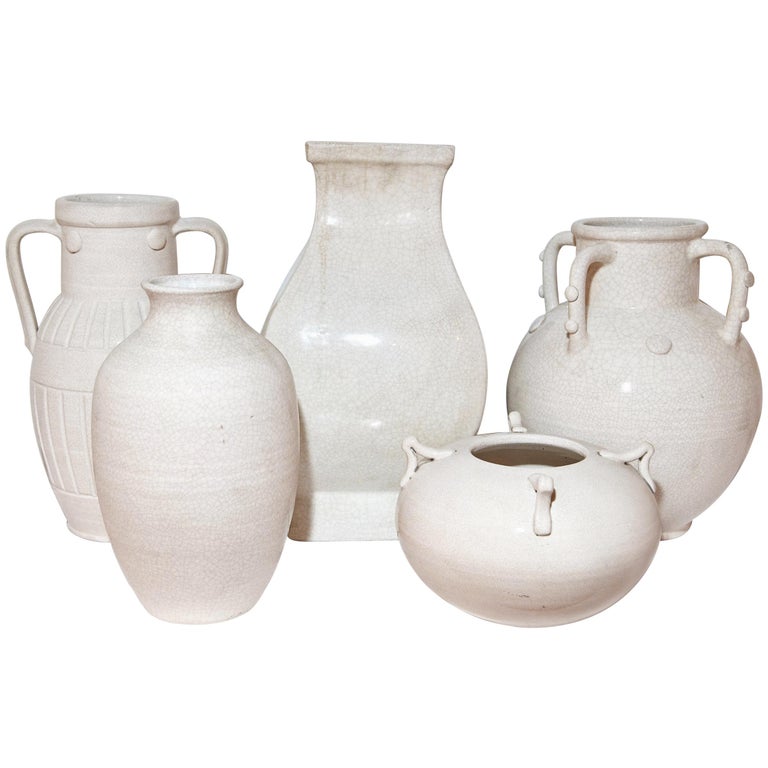 “This is an amazing set by one the most important ceramists of the twentieth century. The simple shapes and the crackle finish makes them timeless.” 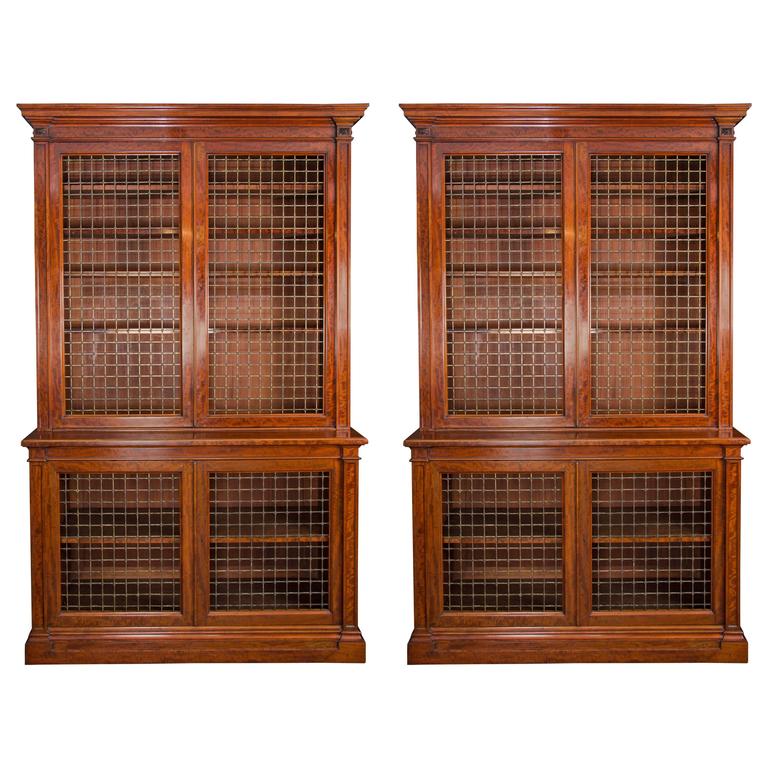 “We have always had a crush on English furniture. This pair of bookcases impresses with its outstanding mahogany and metalwork.” 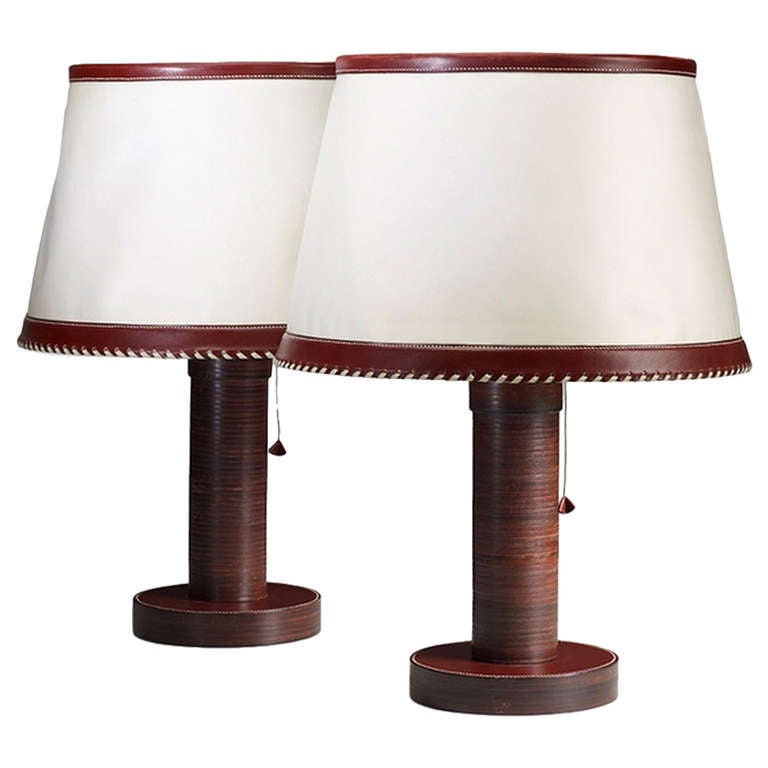 “Probably my favorite designer, Dupré-Lafon developed a very particular language. He had an incredible ability to mix leather, wood and metal.” 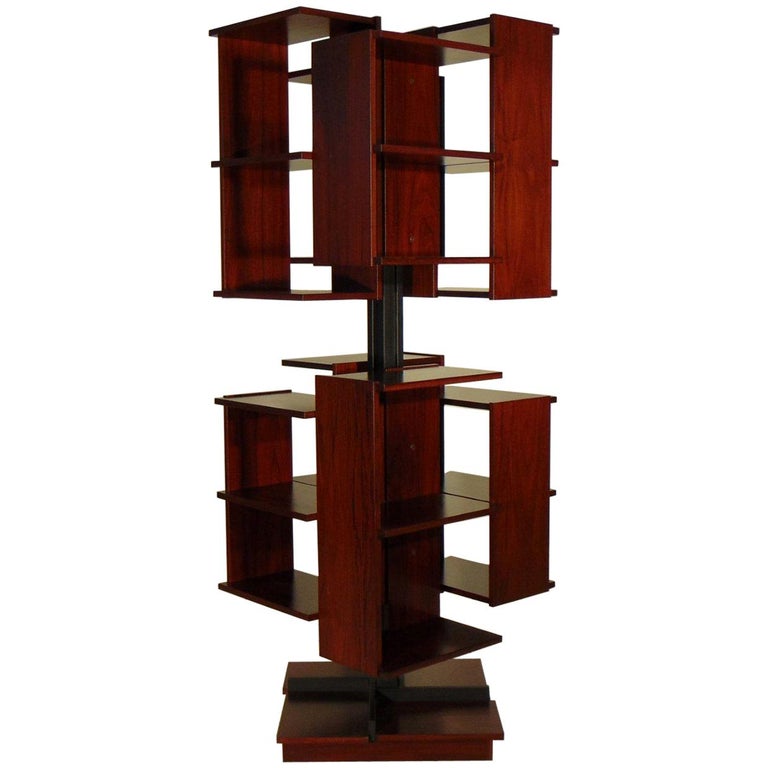 “This piece recalls an English revolving library but with the additional perspective of Italian design.” “One of the most particular talents of twentieth-century decoration. It has a primitive and very sharp appearance. It’s the kind of piece that makes a room.”