These Surreal Chairs at R & Company Are Unmistakably Works of Art 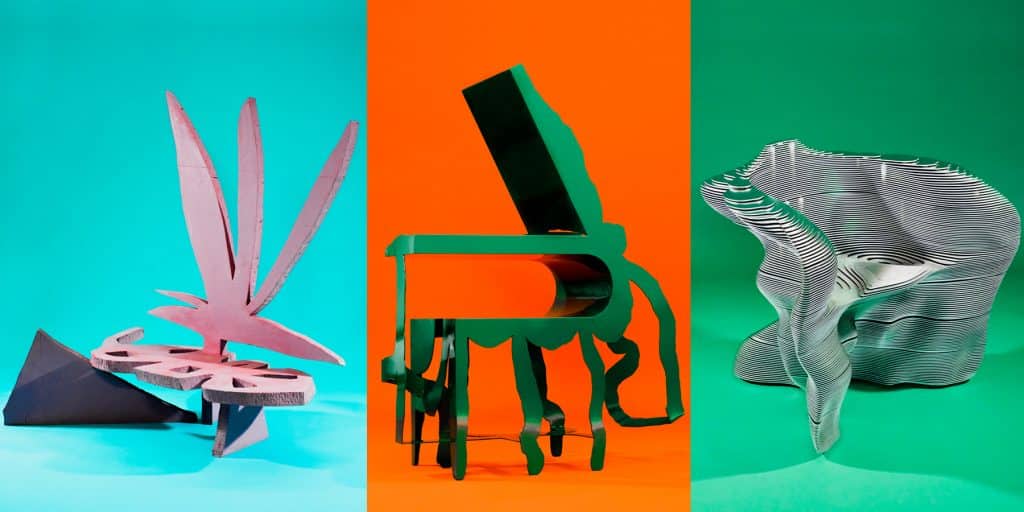 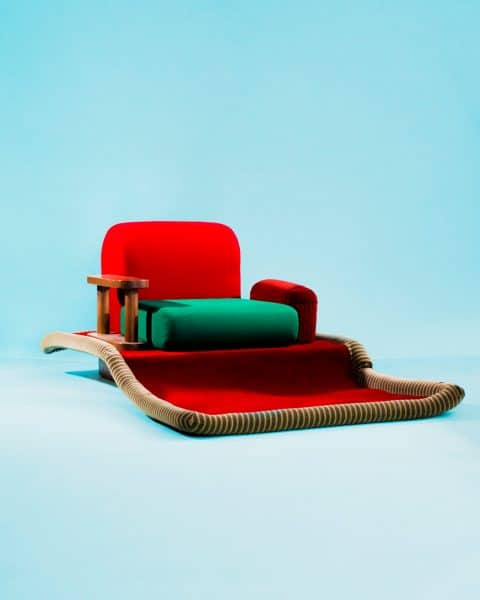 Raquel Cayre, a 28-year-old wunderkind of the design world, uses the Instagram handle @ettoresottsass — her nod to the late Italian designer. So it’s no surprise that she included a piece by Sottsass in a show of chairs she curated at Tribeca design gallery R & Company. The work, from 1974, is a showstopper. Resembling a flying carpet (which is what he named it) with arms and backrest, it would work at the beach or in a harem. It looks like it might even be comfortable, which makes it one of the tamer pieces in the show. “Chairs Beyond Right & Wrong,” on view through October 19 at the gallery’s 64 White Street location, tests the limits of what a chair can be. In her curator’s statement, Cayre, referencing a Joseph Kosuth installation, urges the reader to imagine a room containing a chair, a photograph of a chair and a definition of a chair. How many chairs, she asks, are in the room? 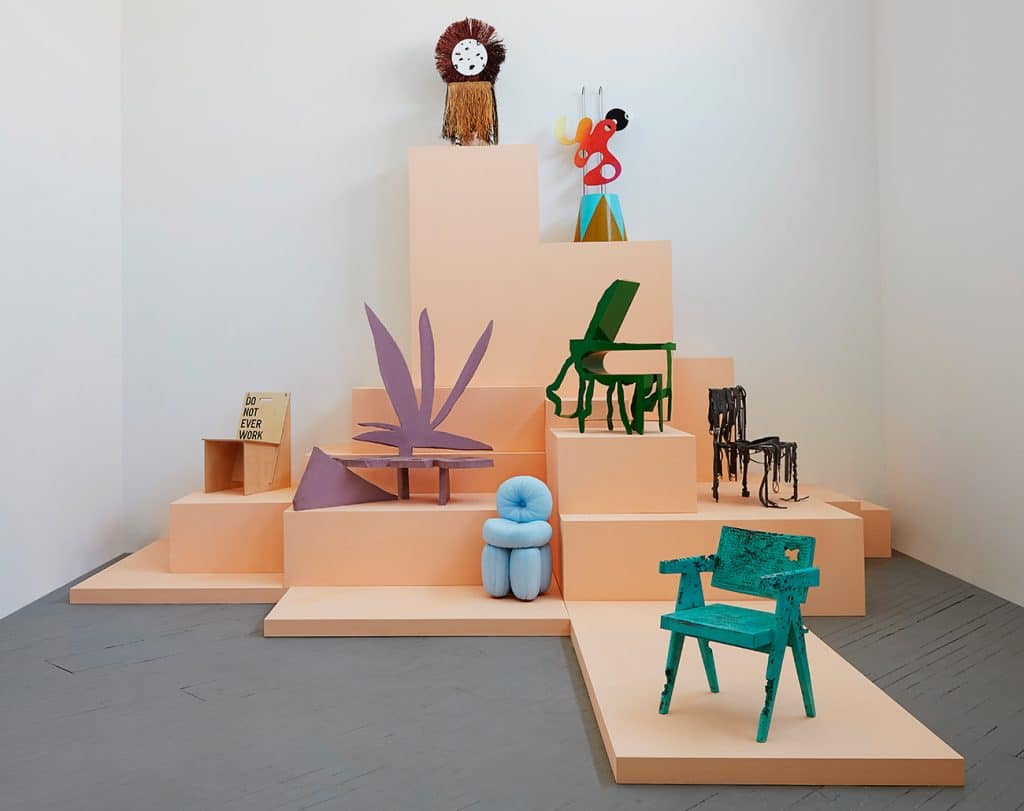 In her curator’s statement, Raquel Cayre encourages gallerygoers to imagine a room containing a chair, a photograph of a chair and a definition of a chair. How many chairs, she asks, are in the room? Photo courtesy of R & Company

Some of the show’s many pieces are chairs, and some are “chairs.” All are unmistakably artworks; among the hundreds of people at the opening, none tried to sit, according to Cayre. (One of the first items visitors see — a bentwood café chair wrapped around a column by Mexican artist Mario Navarro — sets the tone.) So well-respected is R & Company that it was able to borrow pieces from galleries like Gagosian (which helped install a chair with one leg balanced on a glass Evian bottle, a creation of the Gagosian-represented artist Urs Fischer) and David Zwirner (which loaned three paintings by artist Nate Lowman, one of which is displayed on a paint-splattered chair from his studio). 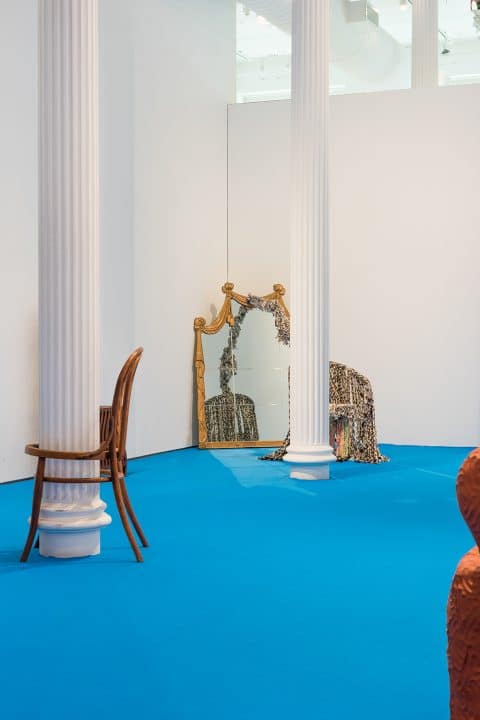 There’s no risk visitors to R & Company will take an unauthorized seat in Mario Navarro’s Future Islands, 2019. In the back corner is Lucy Dodd’s Grandma Serpent, 2017. Photo courtesy of Nicole Cohen

A number of artists who had never made chairs before agreed to do so for the show, says Cayre. They include the Brooklyn-based painter Reginald Sylvester II, creator of a curved stainless-steel chair, its shape based on a shoe belonging to his mother. Sylvester is known, according to his gallery, London’s Maximillian William, for paintings that are “trigger provoking and often disconcerting.” His chair is neither of those things.

Maarten Baas, who first gained attention for torching classic chairs (his Smoke series, beginning in 2002), isn’t in the show, but his influence is felt in numerous pieces that riff on icons. These include artist Daniel Arsham’s bronze interpretation of Pierre Jeanneret’s scissor-legged Chandigarh armchair; Al Freeman’s self-explanatory Soft Chubby Reitveld chair; and Thomas Barger’s Ornament Is a Shaker Crime, a Shaker chair exploding with embellishment. Baas is also known for his Clay collection, launched in 2006. Among its progeny here — chairs that look like caricatures of chairs — are the delightful powder-coated-metal pieces of the Romanian-American artist Serban Ionescu, who seems to have assembled two-dimensional sketches of oddly anthropomorphic chairs into three-dimensional constructions. (R & Company has a larger installation of Ionescu’s pieces at its 82 Franklin Street space.) 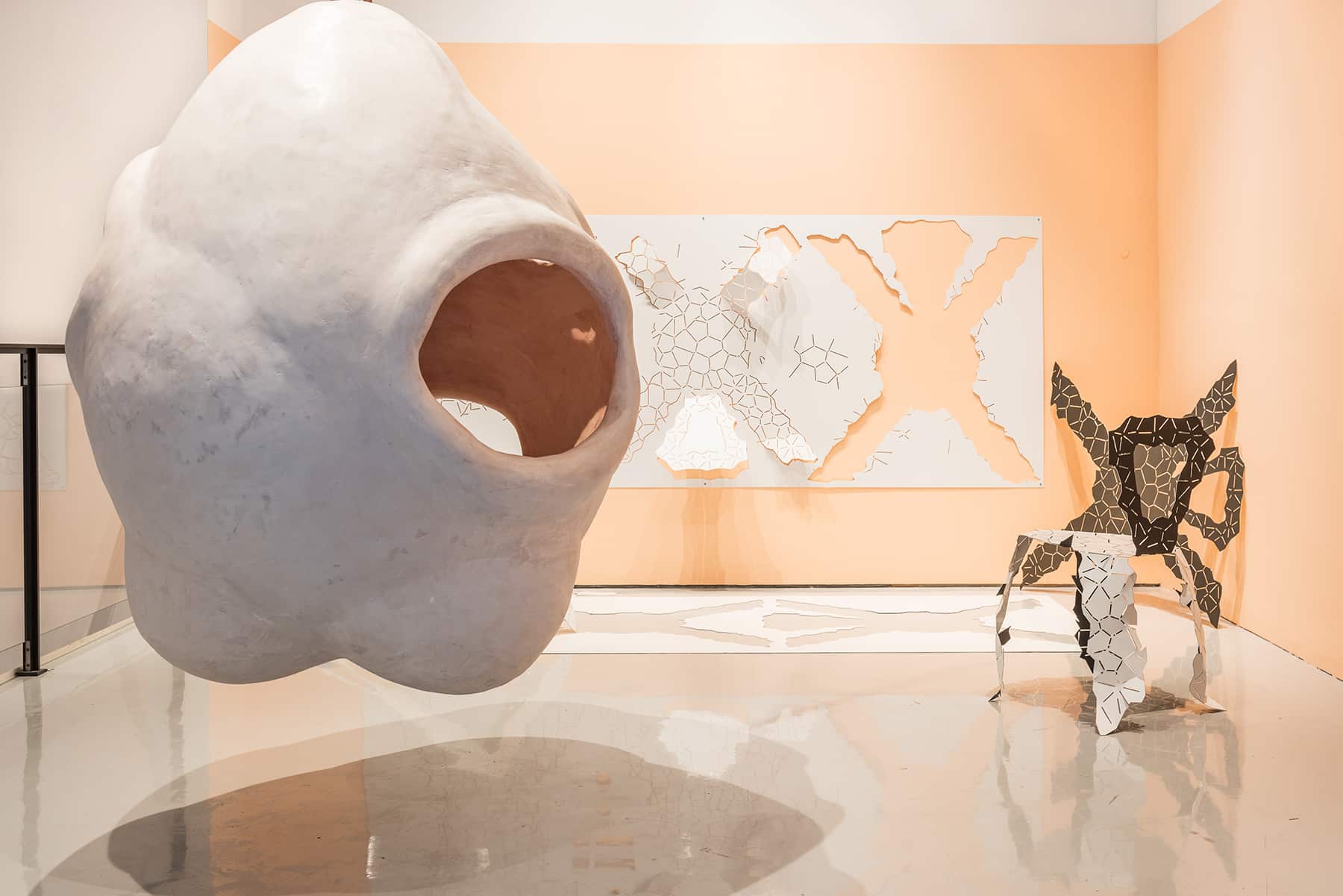 Rogan Gregory‘s Hermaphroditee sitting environment, 2019, is suspended in front of a 2017 Seth Price work made of baked enamel and CNC-router-cut aluminum. Called Chairs Beyond Right and Wrong, the Price work gave the entire exhibition its name. Photo courtesy of Nicole Cohen 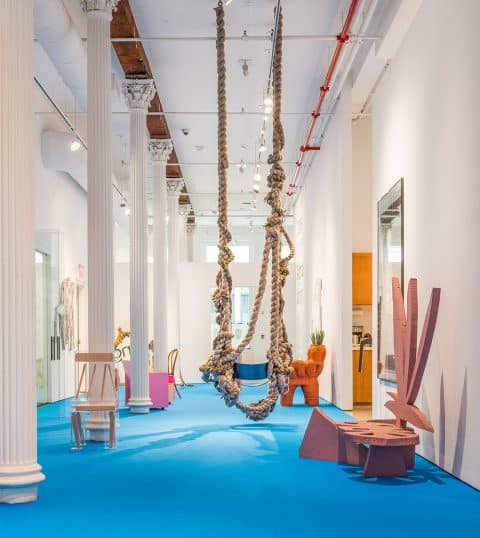 Artist Alex Israel silkscreened the word Infrathin on a flimsy director’s chair, turning it into an homage to Marcel Duchamp, the father of readymades, the coiner of the undefined word infrathin and the apparent inspiration for many of the pieces in the show. Jordan Wolfson festooned a caned Josef Hoffmann chair with garish handmade bumper stickers, less provocative than some of his art but provocative for a chair.

Katie Stout created a series of ceramic pieces. These include a club-footed, front-backed chair that is part of a body of work the gallery’s website describes as pushing “just past the threshold of what is comfortable — encouraging her audience to consider elements of the so-called deranged and demented in their everyday lives.” 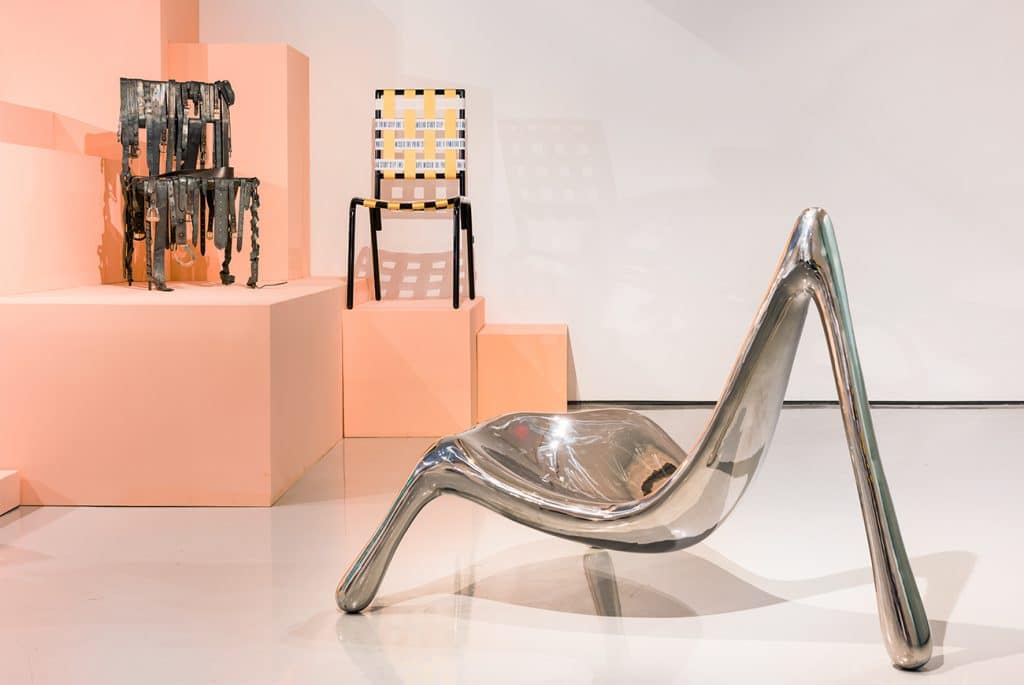 The least surprising chair in the show may be the collaboration between the Brooklyn-based Pop artist KAWS and the Brazilian furniture designers the Campana Brothers: KAWS designed a plush toy based on the characters that populate his work, and the Campanas attached dozens of the stuffed creatures to a chair-shaped frame, as they have done with stuffed animals in previous works. 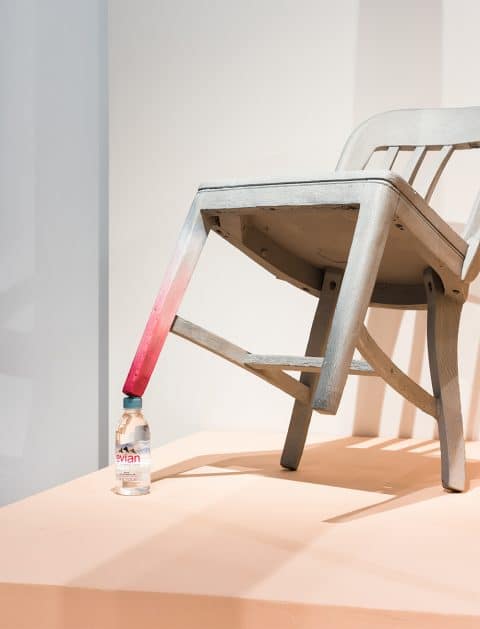 One leg of an untitled 2014–16 piece by Urs Fischer balances on a glass Evian bottle. Photo courtesy of Nicole Cohen

But who said you can’t teach an old designer new tricks? The most surprising chair in the show may be the eight-foot-high Grown chair in gray felt by Gaetano Pesce, age 79 — it’s a departure for the Italian master, most of whose work is anything but gray and felty.

Grown is one of several very large pieces on display; a second is Rogan Gregory’s gypsum Hermaphroditee “sitting environment” (a cementitious pod with orifices, which hangs from a gallery ceiling). Gregory, a former fashion designer, creates works that the R & Company website describes as “inspired by feminine beauty and fertility, marine life and the mysteries of outer space.” The exhibition’s other hanging chair, by Dana Barnes —  who also got her start in fashion — is woven of cashmere, flax, hemp and other fibers and is a lot less forbidding than Gregory’s.

Additional attention-getters include a chair by Jim Lambie seemingly layered with leather belts (they’re actually black-painted metal) and a chunky, carved-walnut chair by the Haas Brothers.

These chairs have strong personalities; sitting on them might insult them. As Cayre writes in her curator’s statement, which could be the manifesto of a seating-liberation movement, “Chairs no longer gravitate toward a table. They take on their own meaning.”

Shop a Collection Inspired by “Chairs Beyond Right and Wrong” 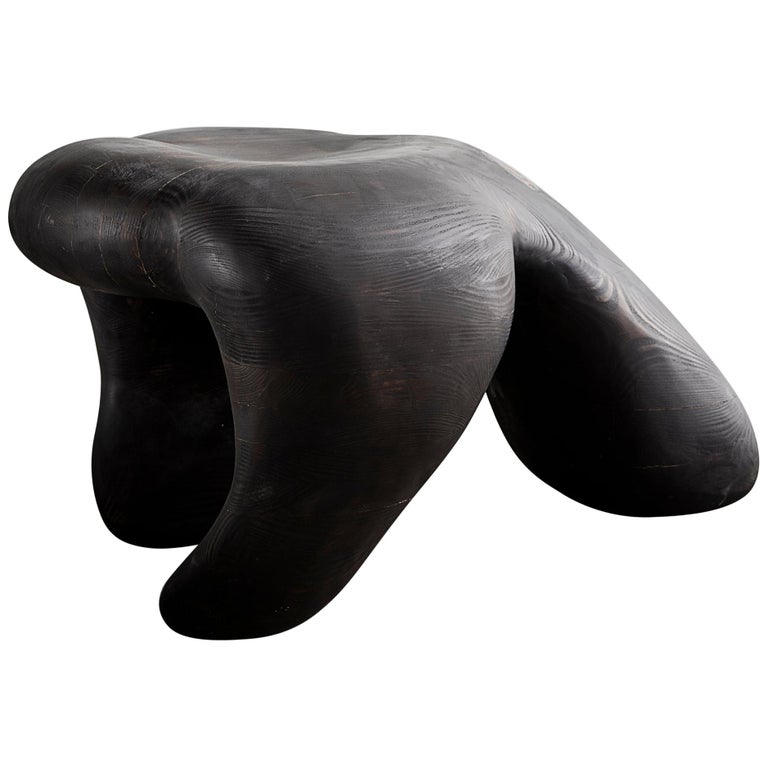 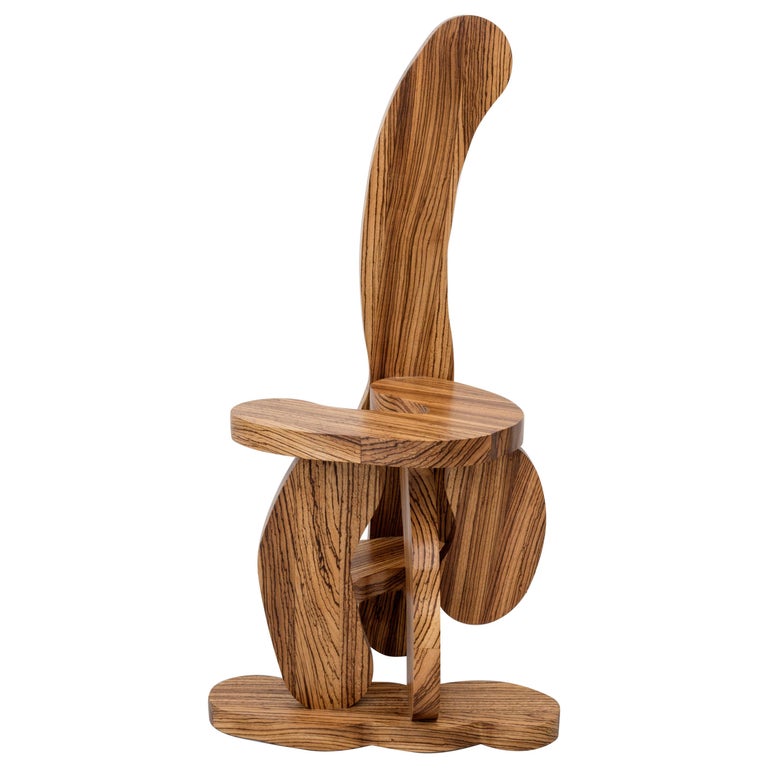 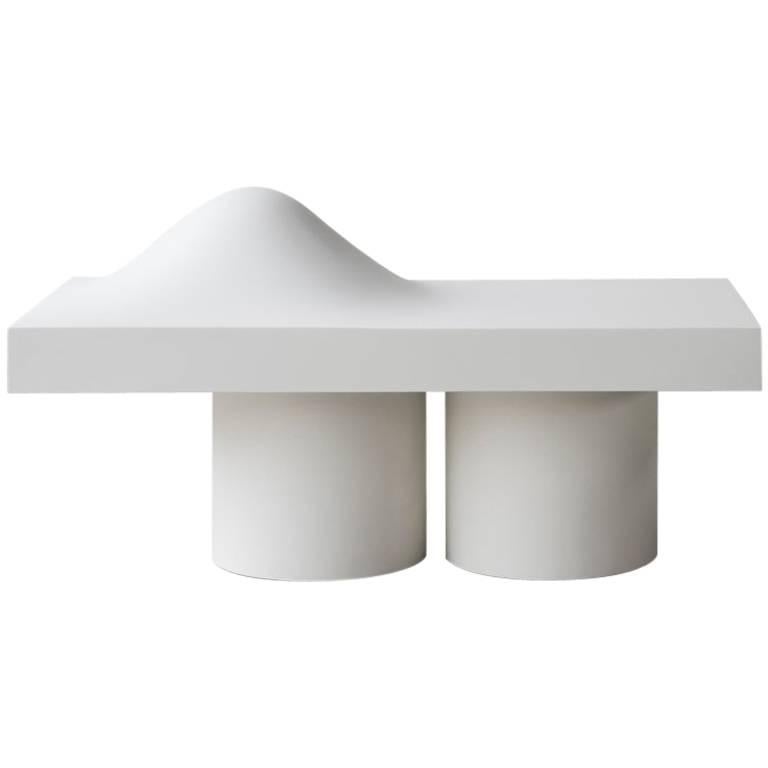 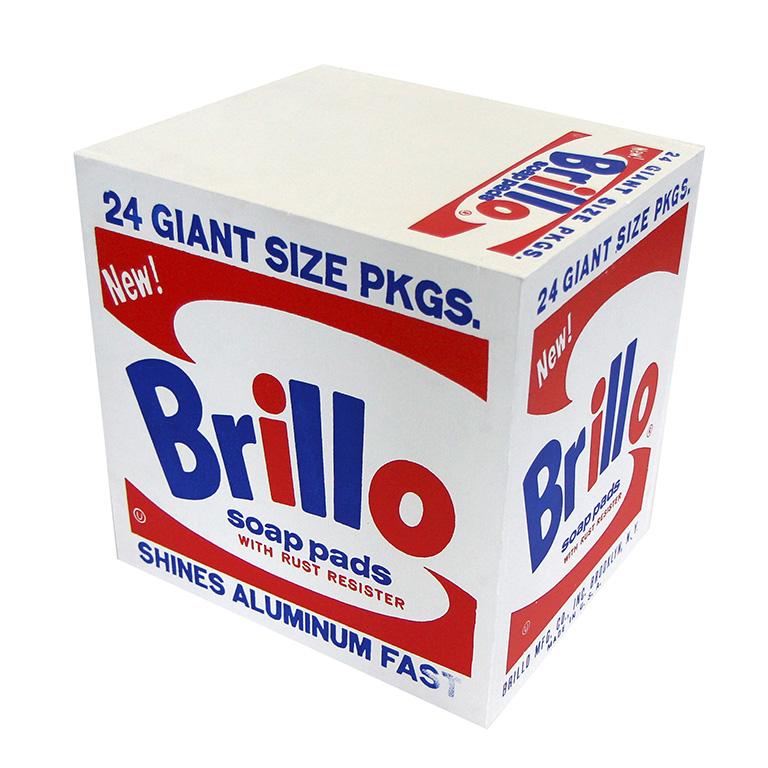 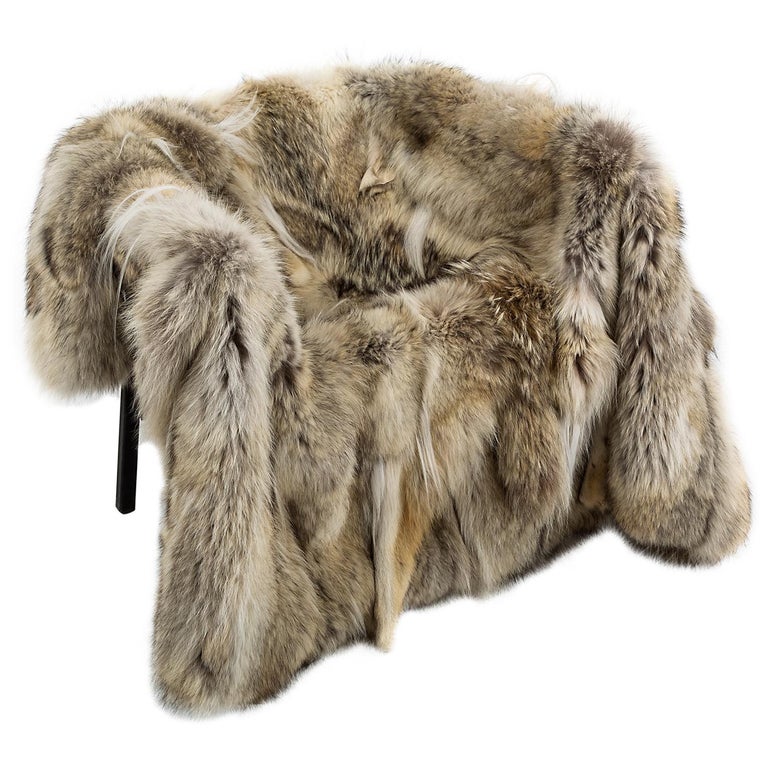 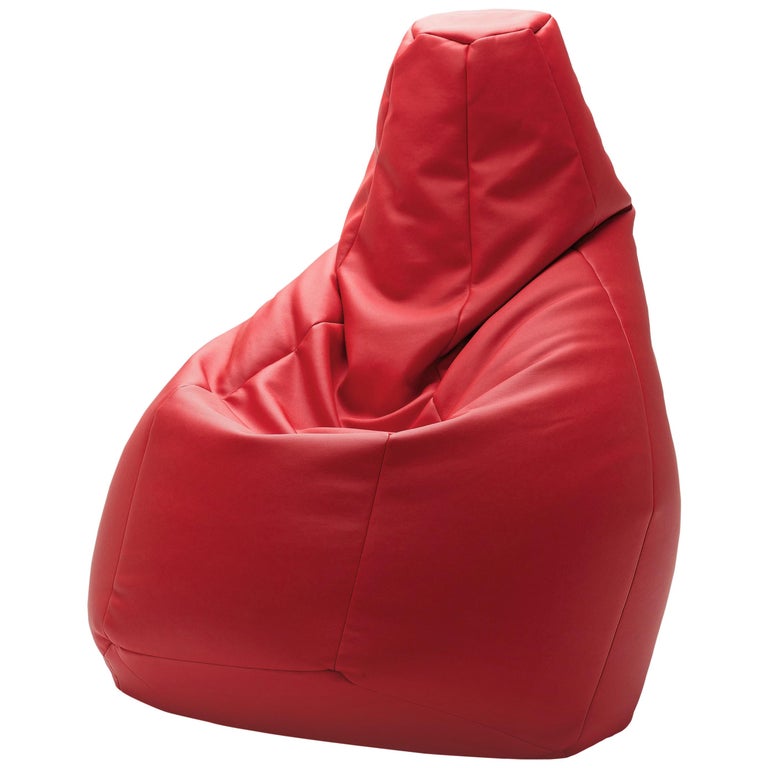 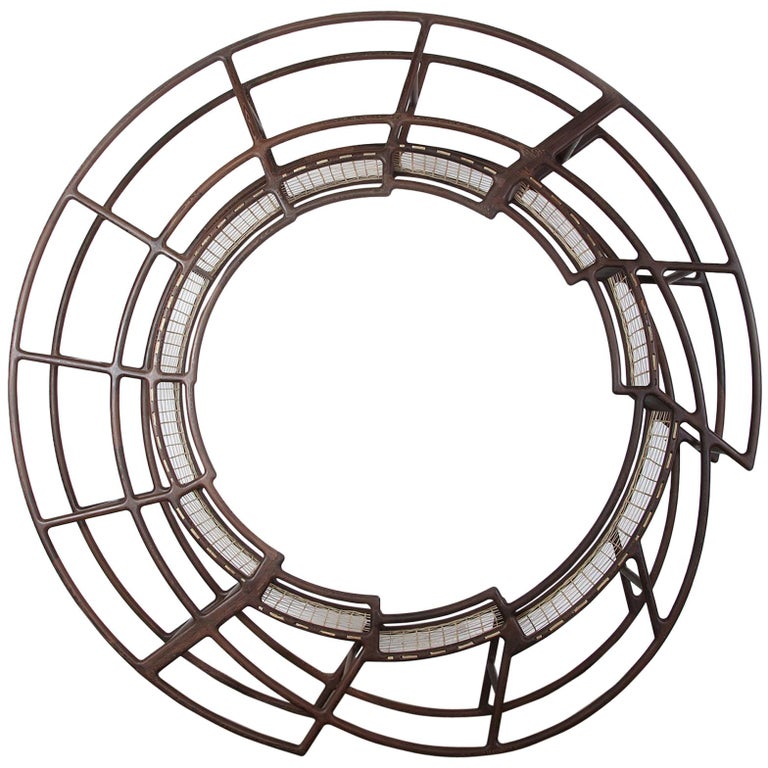 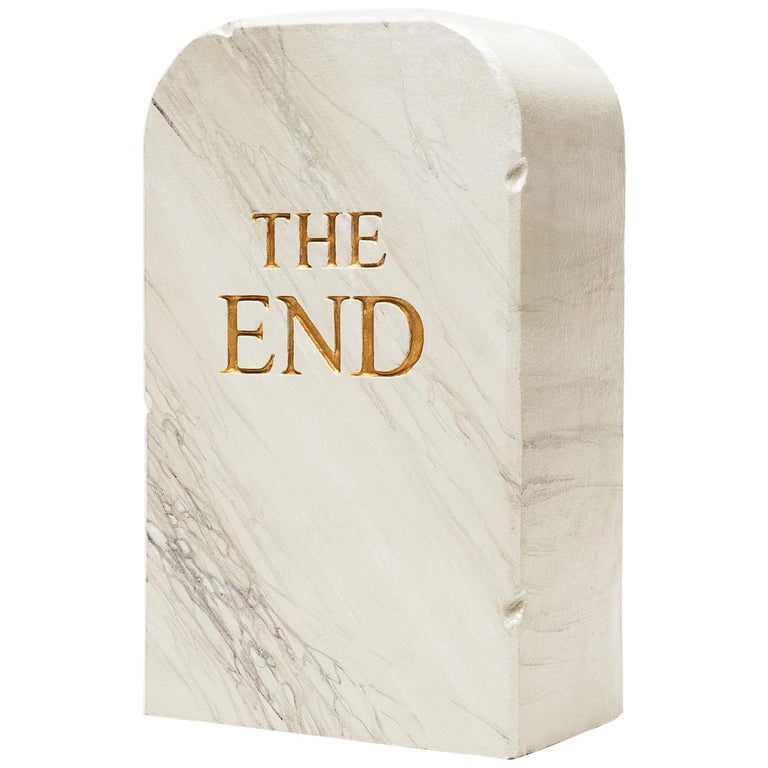 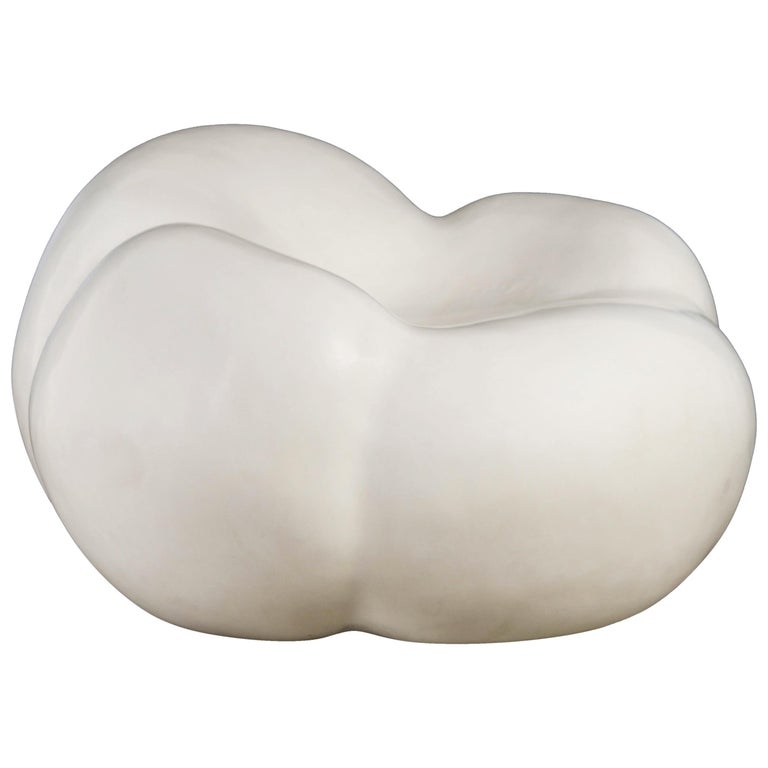 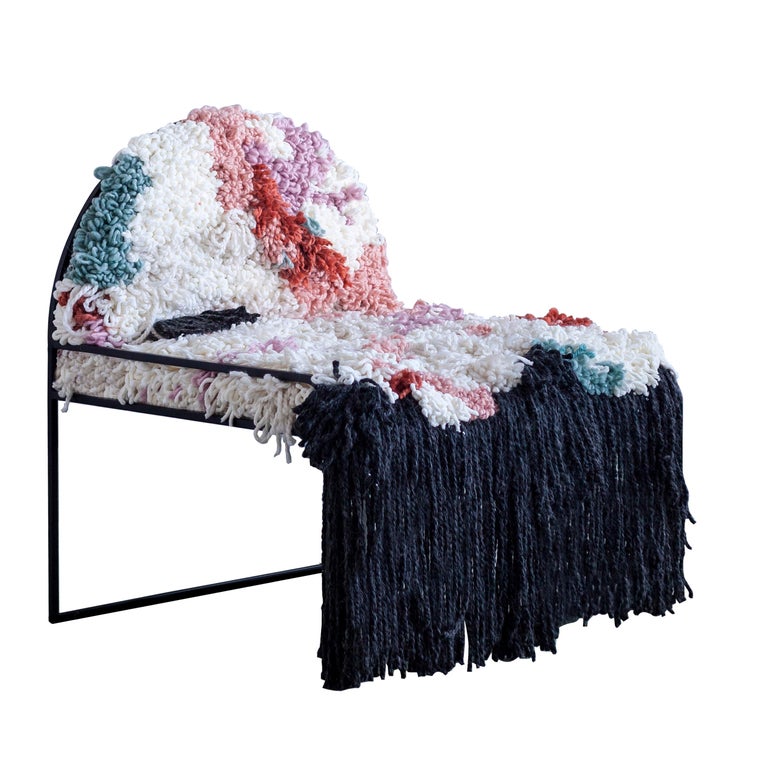