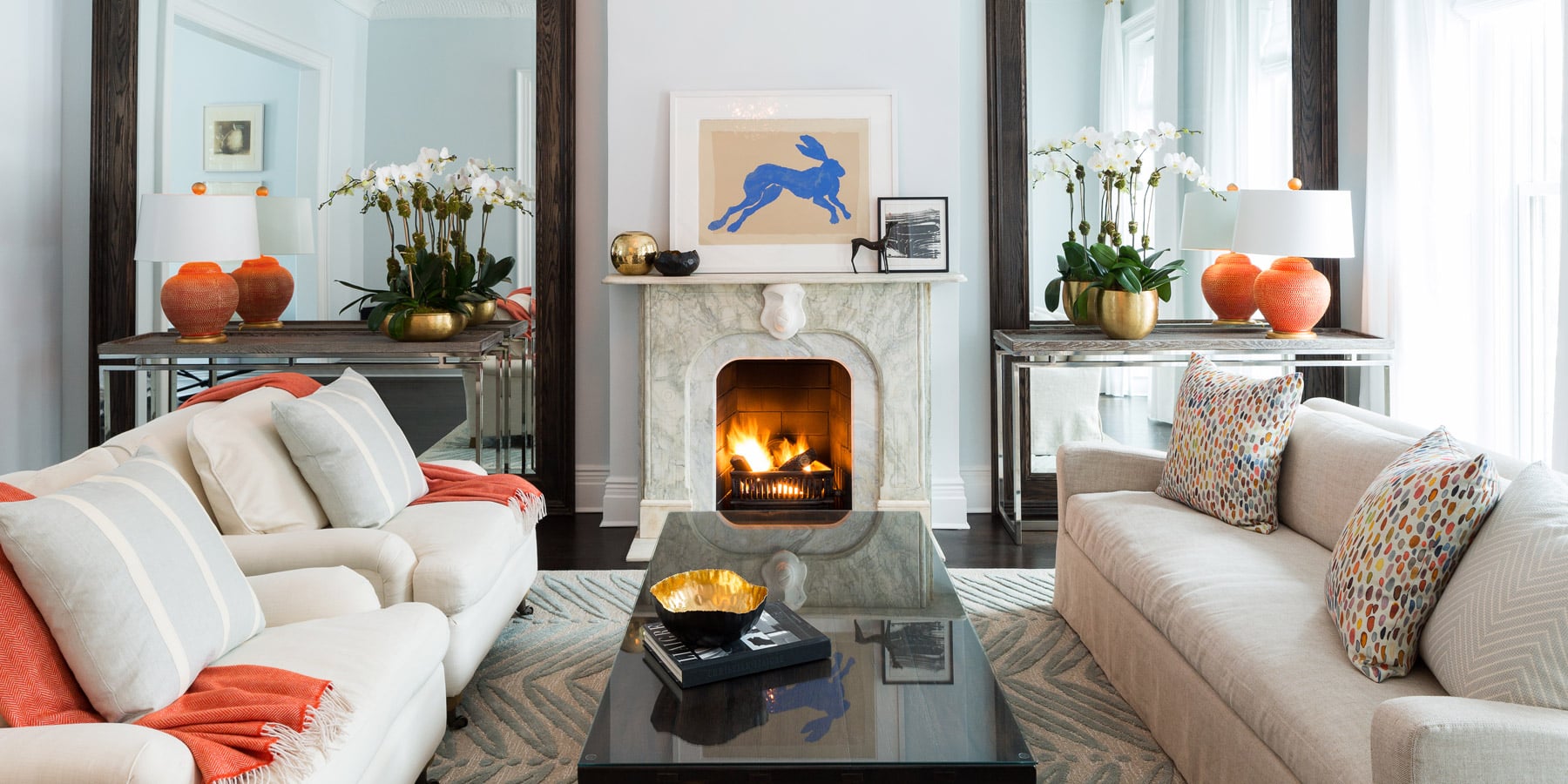 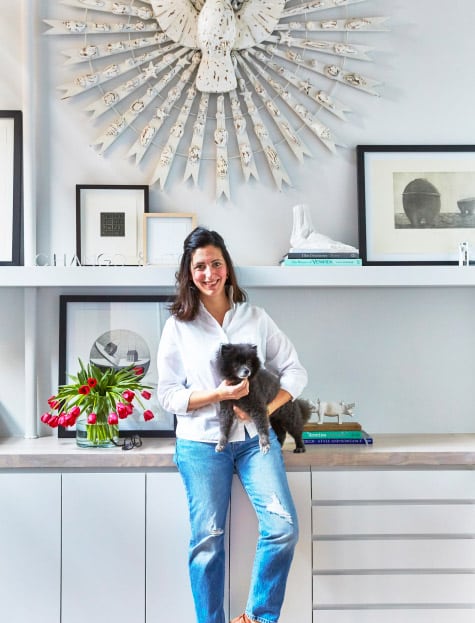 Susana Simonpietri, who founded Chango & Co. with her husband, Josh Kay, stands in her Brooklyn office with San, her Pomeranian. “We have a very dog-friendly office,” she says. “There’s a dog here almost every day.” (portrait by Jacob Snavely). Top: The living room of this Park Slope, Brooklyn, home features a custom sofa and chairs, plus custom mirrors flanking the fireplace. Photo by Ball & Albanese

Susana Simonpietri has had so many projects going on — among them, a lakefront home in Connecticut, a new-construction house on Long Island’s North Fork and a recently completed 12,000-square-foot ground-up project on 250 acres in Upstate New York — that if the pace keeps up, says the 38-year-old designer, “I may have to clone myself.” What’s remarkable is that her Brooklyn design firm, Chango & Co., with 13 full-time employees, is only a decade out of the gate and only two years out of the Brooklyn brownstone Simonpietri shares with her husband and business partner, Josh Kay.

Lately, work has been nonstop, with projects being completed as fast as Domino and Architectural Digest can publish them. Last year, Chango opened a 1,600-square-foot retail store, selling distinctive textiles, ceramics and other home goods, in the same cast-iron Williamsburg building where its offices are located. The firm’s profile was raised still higher by an article that appeared in April in the New York Times real estate section about the 1970s East Hampton saltbox Simonpietri and Kay bought for themselves last summer and renovated in three weeks, while also working on their Bed-Stuy brownstone and having their first child — Oliver, who will be a year old in August.

Every so often, a design force appears whose work is markedly different. That is certainly true of Chango’s distinctively graphic interiors, often created for young families for whom tradition is not top of mind. But neither are the firm’s homes trendily modern. They’re punchy, fresh and tailored to their owners — “client-specific as well as site-specific,” as Simonpietri puts it. Adds Kay: “We’re never going to repeat ourselves. We’ll invent something new every time.” 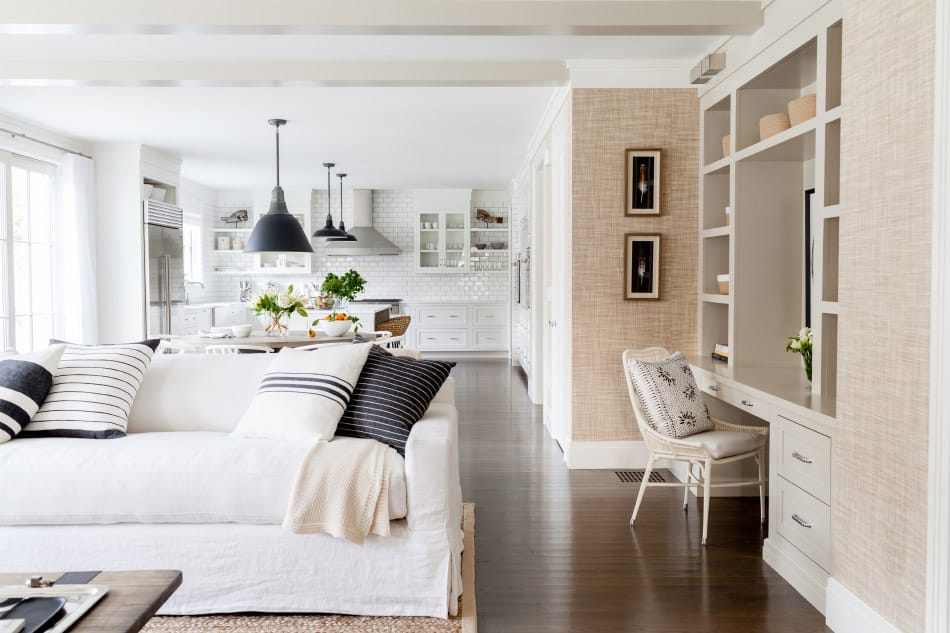 A neutral palette unites the open-concept kitchen, living and dining space in this Westport, Connecticut, home. The living area features a custom white linen sofa topped with throw pillows from Chango & Co. The pillow on the desk chair is also from the firm. Photos in this slideshow by Raquel Langworthy 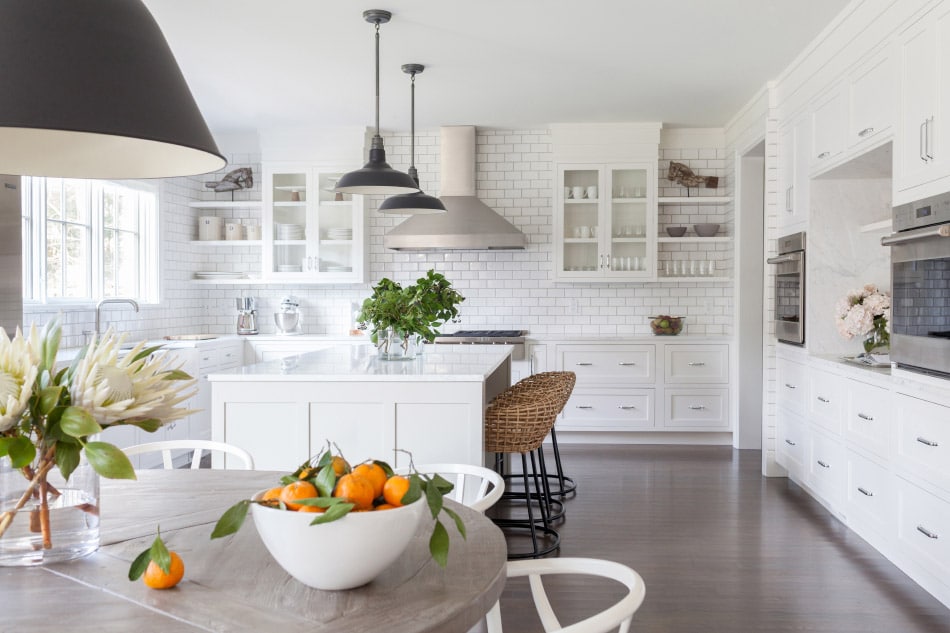 White subway tile and a mix of open shelving and glass-fronted cabinetry give the kitchen an airy, casual feel. A set of Hans Wegner Wishbone chairs surrounds the round wooden dining table. 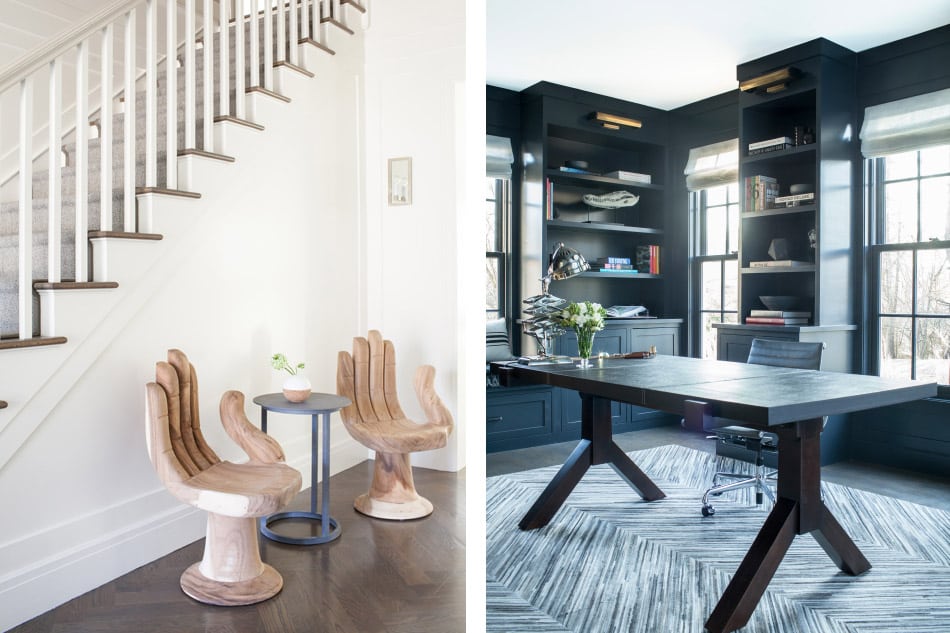 Left: The entryway includes a pair of wooden hand chairs and sconces from Circa Lighting. Right: The study contains built-in shelving and storage and a custom desk by CasaMidy. 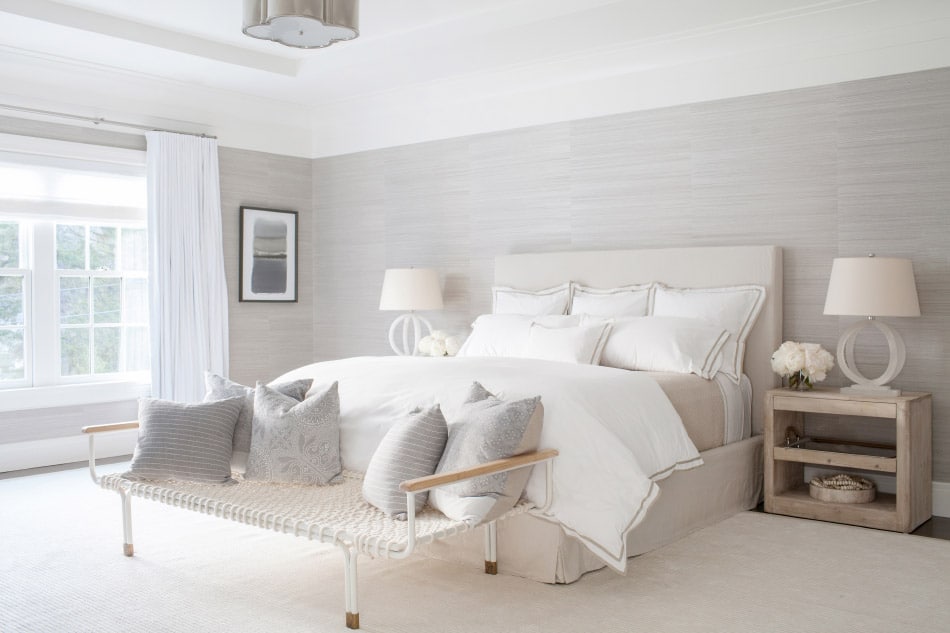 The serene master bedroom was designed with light colors and soft textiles, as in the bed upholstery and the Chango & Co. throw pillows topping the bench. 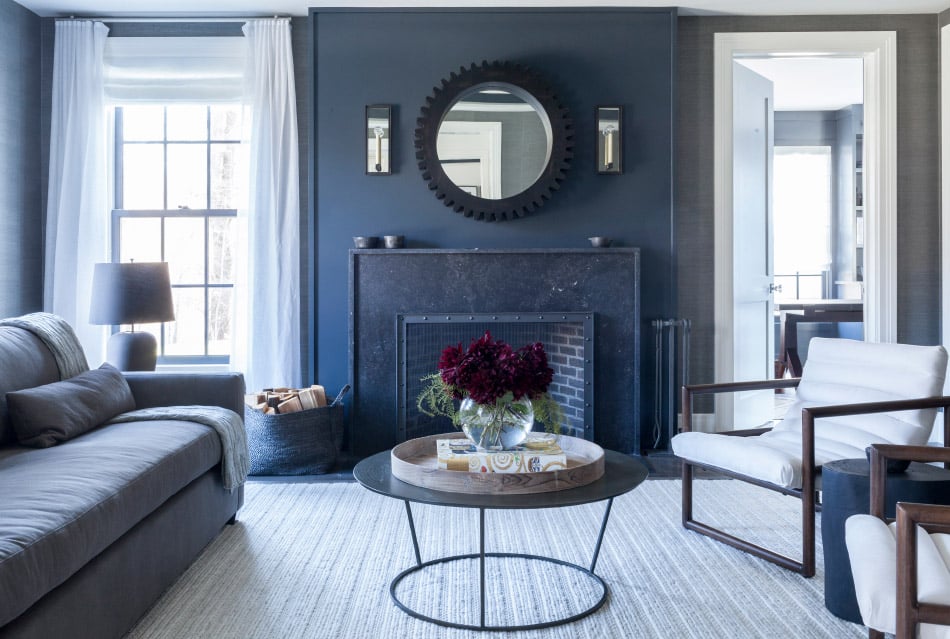 Simonpietri chose a deep blue gray for the living room walls, creating a contrast with the other spaces that helps them achieve the Scandinavian lightness the homeowners desired. 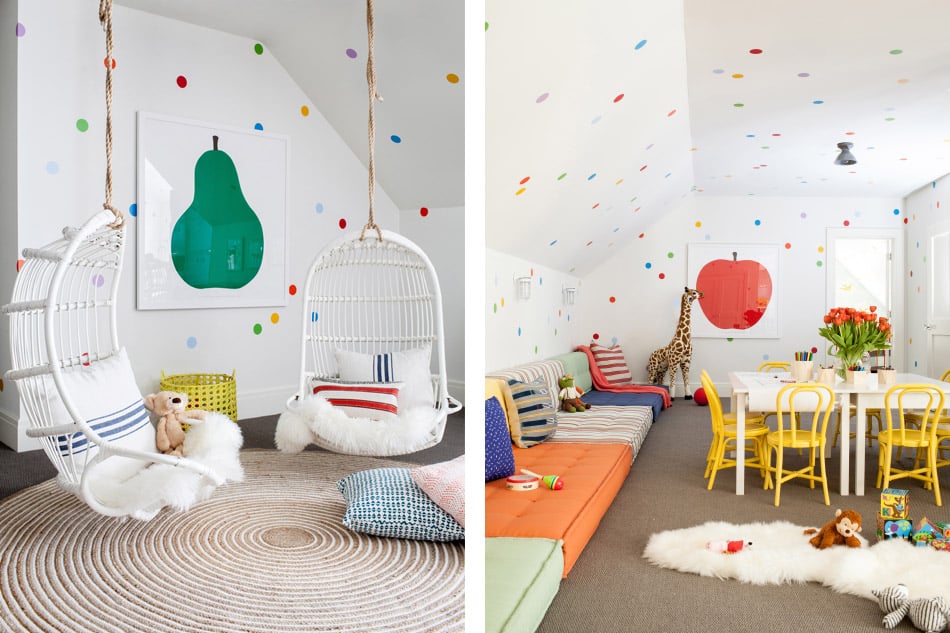 Left: Chango & Co. converted the attic into a playroom with colorful dotted walls and vibrant art and furniture. Here, two swinging chairs are topped with sheepskin throws and Chango & Co. pillows. Right: The space also includes an art table surrounded by bright yellow bentwood chairs and an eclectic collection of tufted cushions along the wall. 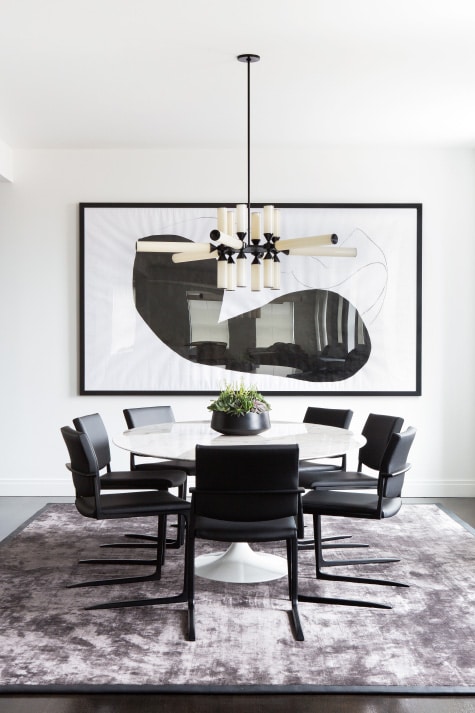 A Roll & Hill chandelier is mounted over a Design Within Reach table and Holly Hunt chairs in this Tribeca dining room. Photo by Sarah Elliott. Check out Simonpietri’s tips for creating family-friendly dining rooms on The Study.

Even the company name is a departure in a field where design firms are frequently eponymous. Chango, explains Simonpietri, is a grackle found in her native Puerto Rico:  “a bird with a playful spirit that seems to find itself in the middle of everything.” It’s an apt mascot for a busy young firm whose projects confidently deploy bold colors, bright stripes and patterns and that is becoming known in particular for outstanding children’s rooms.

And that’s not the half of it. Chango is a full-service operation, involved in everything from architecture and interiors to landscaping. It often works with outside architects from the get-go on new construction and is responsible for layouts and finishes — even roofing choices.

Simonpietri grew up in a 1950s house in San Juan with parents who were serious collectors of modern art.“The house was covered from floor to ceiling in art — mostly abstract Latin American paintings, sculpture and works on paper — which was a great influence on me,” she says. “The house was a revolving door of artists coming in and out.”

There were early inklings that interior design was to be her calling. As a child, Simonpietri recalls, “I would move my bedroom furniture around in the middle of the night. Nobody could figure out how I did it, I was so little.” But she didn’t initially consider the field as a career, instead studying comparative literature and modern languages and spending time in England and France. She was on the verge of sending off her application to NYU’s graduate program in creative writing when “something in me said, ‘Don’t do this.’ ” She shifted gears and enrolled at Brooklyn’s Pratt Institute, where she got a master’s degree in interior design, then gained real-world experience working for top New York firms, including those of Benjamin Noriega-Ortiz and architect Mark Zeff. 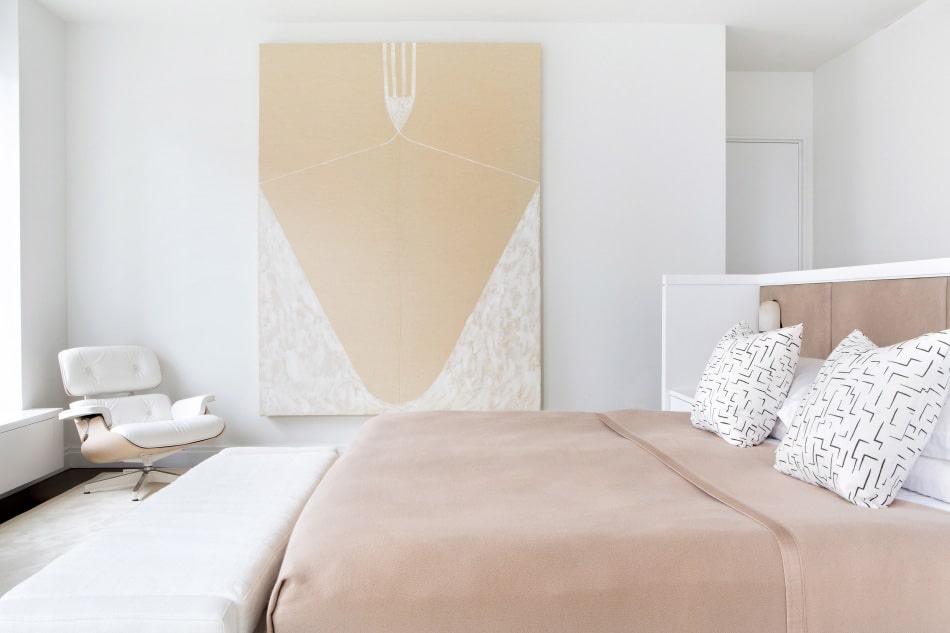 White Ray, by Aschely Vaughan Cone, hangs on the wall of this Tribeca master bedroom, which also features a Charles and Ray Eames lounge chair and a custom bed and bench. Photo by Sarah Elliott 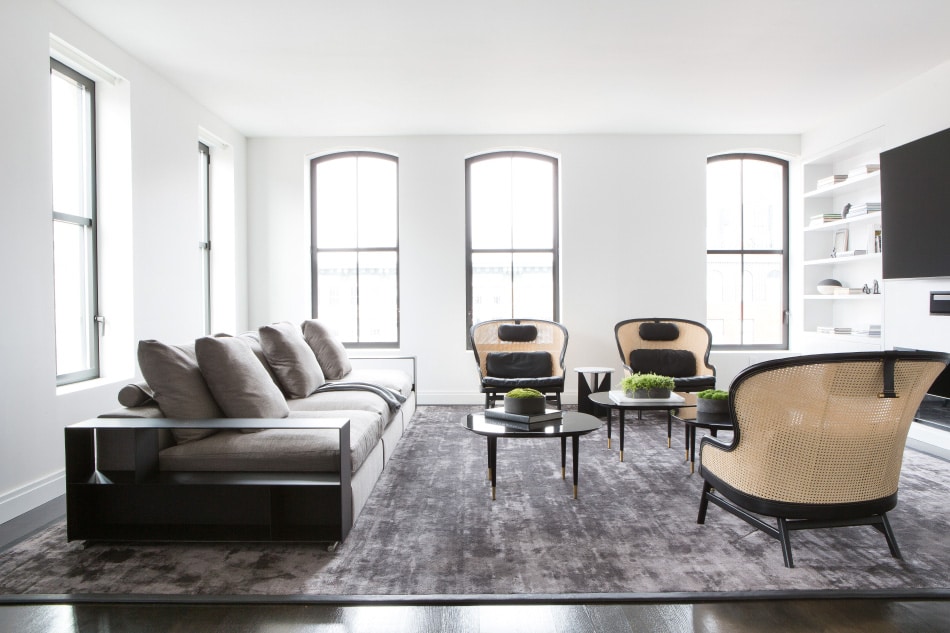 The living room is outfitted with a Flexform sofa and a trio of cane-backed chairs. Photo by Sarah Elliott 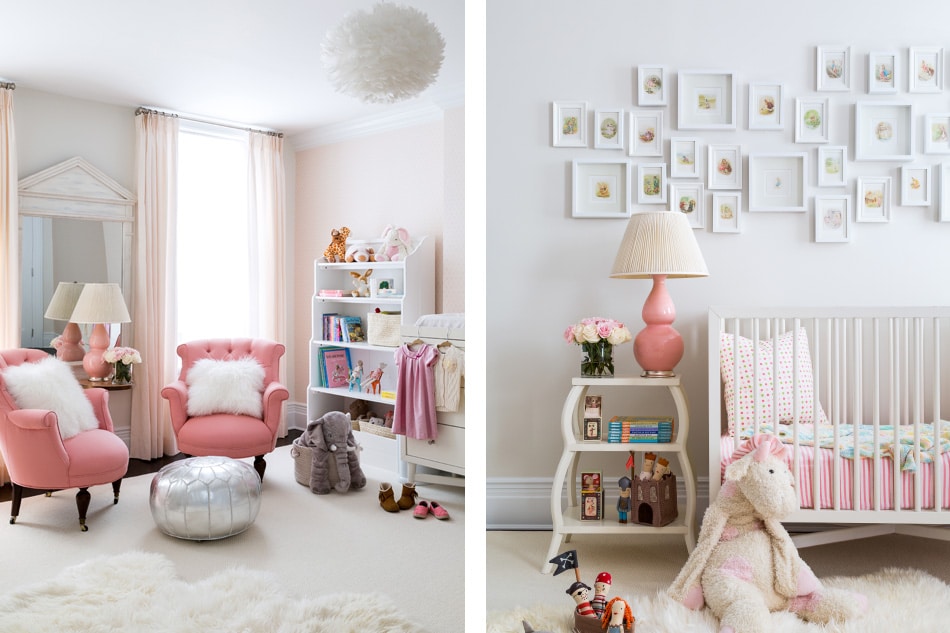 Left: In this Park Slope, Brooklyn, nursery, a pair of custom pink tufted armchairs are topped with fur pillows, while a silver Moroccan pouf serves as an ottoman. Right: White-framed artworks are hung gallery-style. The homeowners’ vintage table lamp rests on a side table next to the crib. Photos by Ball & Albanese 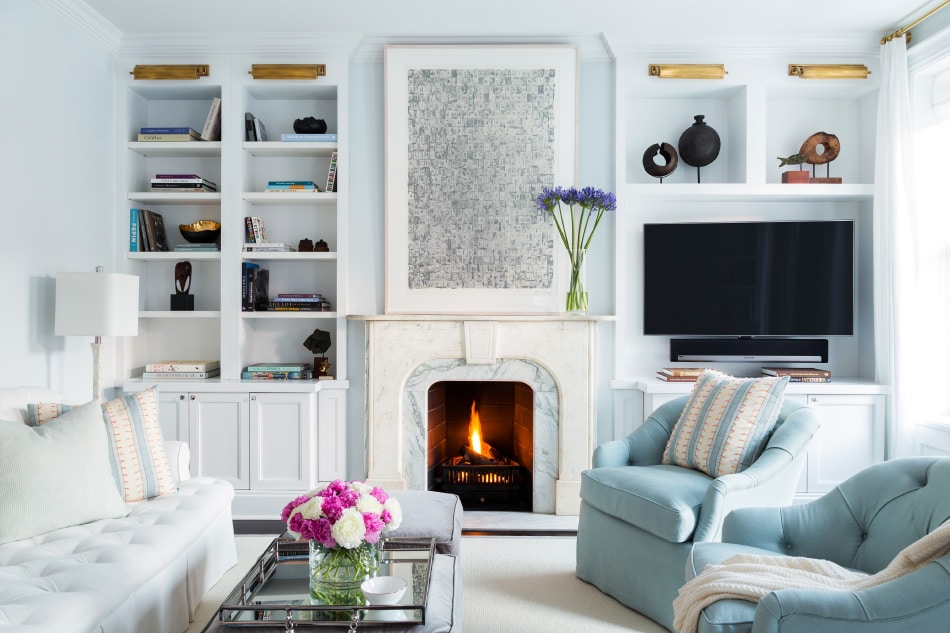 In the Park Slope home’s family room, the pair of custom chairs and the sofa are upholstered in Lee Jofa fabric. The artwork hanging above the fireplace is by Jasper Johns. Photo by Ball & Albanese 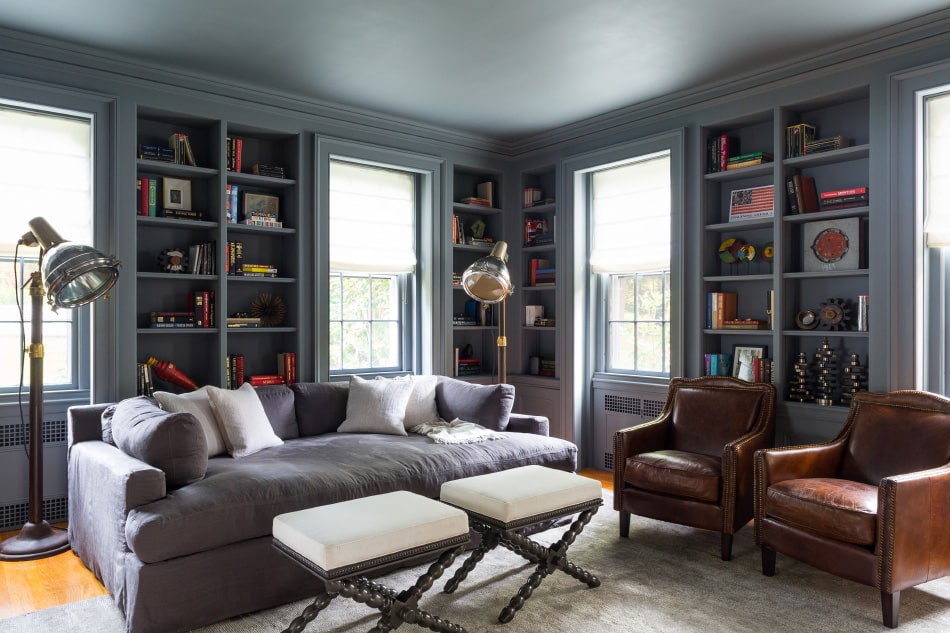 The library of this Litchfield, Connecticut, home features a daybed-like custom sofa flanked by a pair of vintage floor lamps. Photo by Ball & Albanese 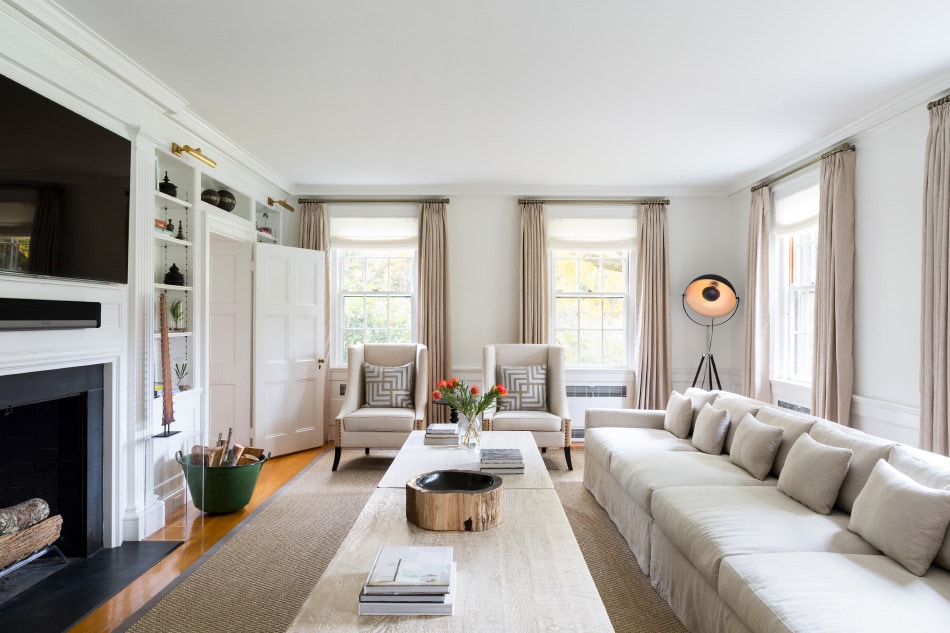 An extra-long custom sofa runs along the wall of the sunny living room, which contains a sisal rug and a light-wood coffee table. Photo by Ball & Albanese 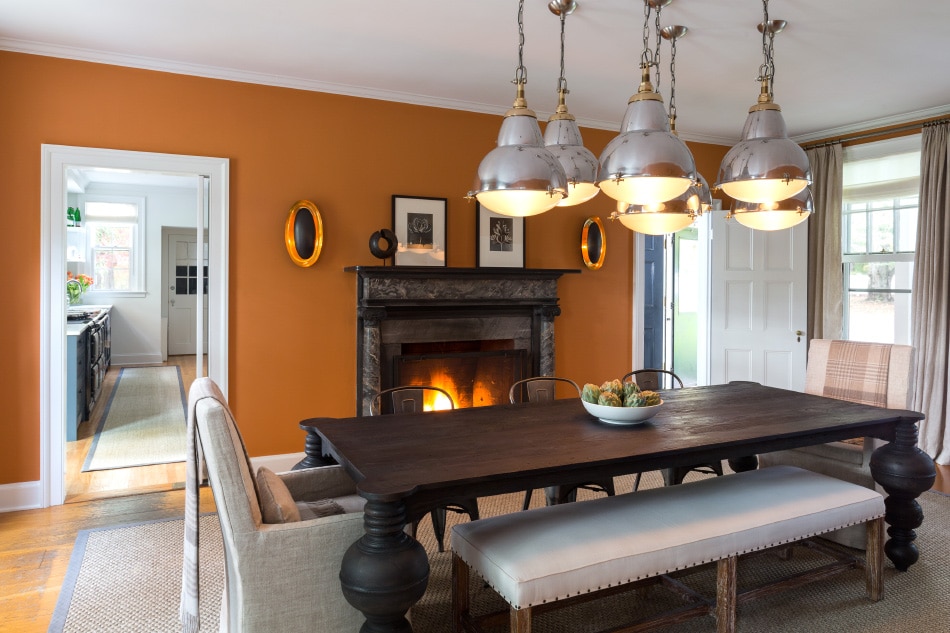 The dining room includes sconces by Arteriors, industrial-style pendant lights and an eclectic mix of seating. Photo by Ball & Albanese 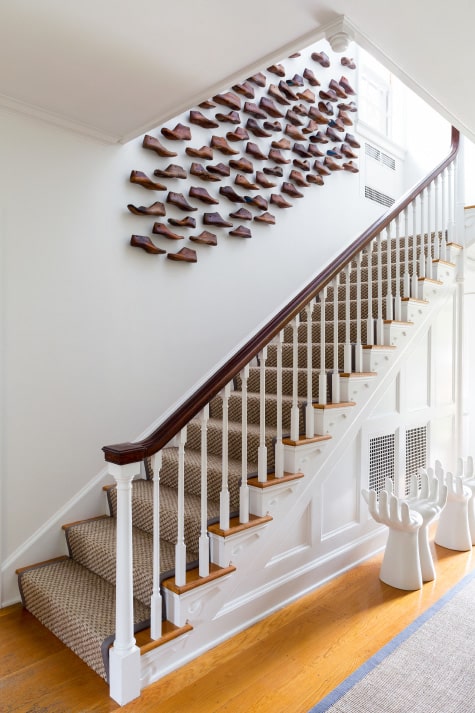 For this country retreat in Litchfield, Connecticut, Chango & Co. mounted a collection of vintage shoe molds along the wall above the stairway. Photo by Ball & Albanese

Among Chango’s recent commissions is a weekend home in Westport, Connecticut, where the task was to make a historic farmhouse feel modern and bright. The homeowners “were looking for a Scandinavian lightness,” Simonpietri says. Counterintuitively, she went with dark walls and woodwork in some of the rooms, using deep blue gray, for instance, in the study and the living room, which is used mostly in winter. “By contrast, it makes other areas feel so much lighter.”

In a Greek Revival on five acres in Litchfield, Chango combined several small rooms to create one great kitchen with a fireplace and Aga range. The owners, an English couple, wanted to preserve the house’s historic character. To that end, the firm kept the wood floors as they were, without refinishing them and intentionally leaving some worn spots. Inspired by the beauty of the surrounding landscape, Simonpietri pegged the decor to the changing colors of the foliage through the seasons. “The living room is pale and summery, the library more of a cozy winter room. The green and white kitchen is very much spring,” she says. The russet-colored dining room, which the family uses most around the holidays, is richly autumnal.

In Park Slope, Brooklyn, Chango set about restoring a 19th-century brownstone’s soul, which insensitive developers had stripped away. The firm added moldings and wainscoting to the plain walls, along with extensive built-in storage, and created a plan for all-new furnishings, lighting, window treatments and art. Fourteen-foot-high mirrors on either side of the front parlor’s fireplace mantel are a typically bold stroke.

As always in Chango projects, the overall effect is of a breath of fresh air, upbeat and uplifting. In doing what she does, says Simonpietri, “I want to have fun.” It shows. 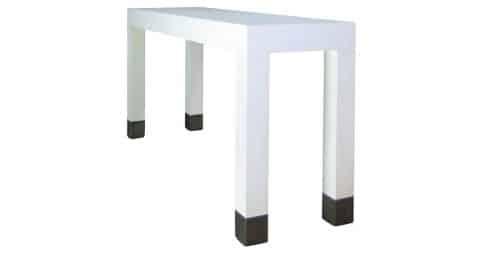 “We used this table in a recent project and loved it. It is a new-production item, so it can be customized, which is fantastic.” 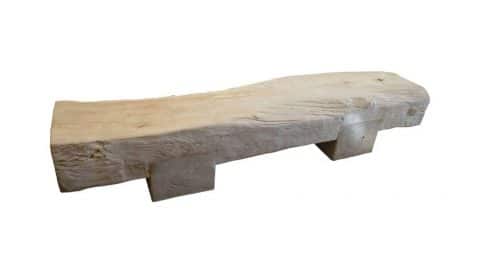 “We often use large benches like this to fill in hallways and add a little interest to corners, which are usually forgotten.” 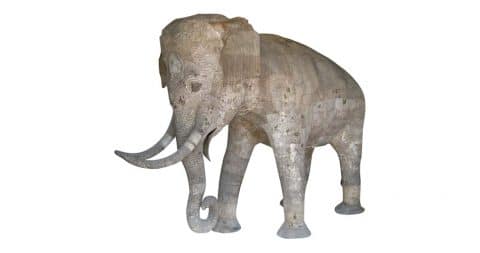 “I saw this guy in person at Dos Gallos, in Los Angeles. Ever since then, I’ve been praying for someone to call me with a 20,000-square-foot home that has a room to be filled with a life-size papier-mâché elephant. I haven’t gotten that call yet, but, hey — maybe one day!” 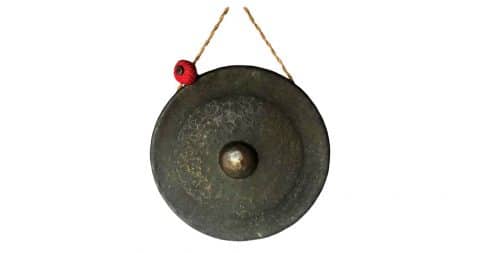 “Put one of these next to your kitchen in that large country house you use on weekends, and bang it when it’s time to beckon the kids to meal time. :-)” 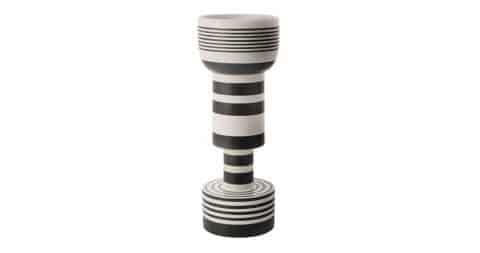 “I love nice statement vases in a space. They look perfectly lovely empty or filled, taking away the stress of having fresh flowers in your home.” 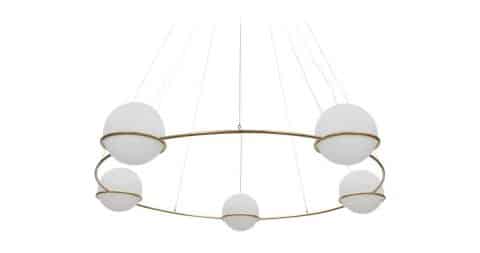 “I’m waiting for the perfect-scale room to be able to use this chandelier!” 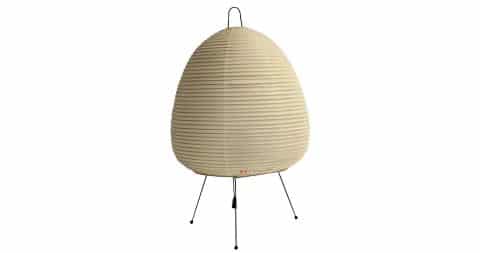 “I love everything about Isamu Noguchi lights. They have a way of making you feel deeply welcome to any room you enter where they reside.”