Welcome to the Wonderful, Carved-Wood World of Christopher Kurtz 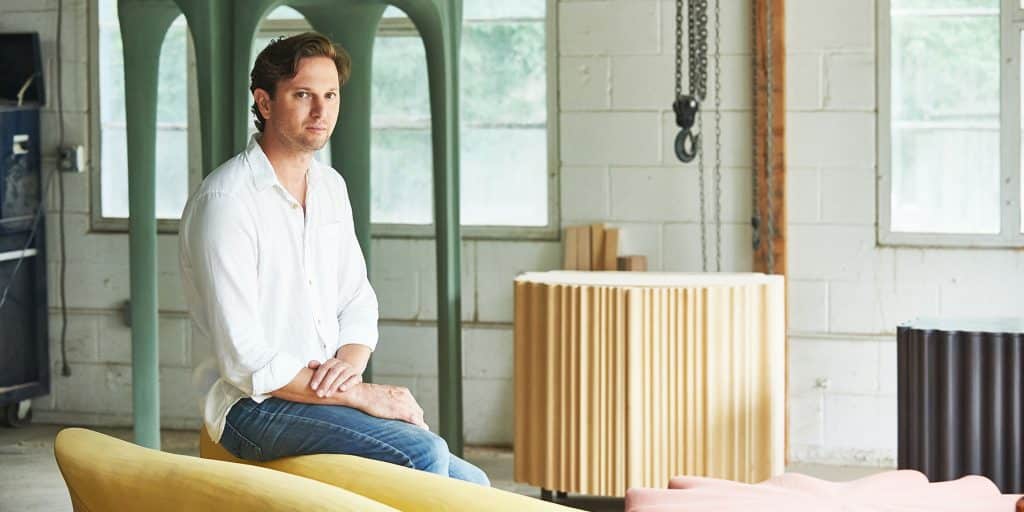 At his workshop in Upstate New York, the artist and designer shows us how he handcrafted the fantastical furniture on display in his latest exhibition.

by Tim McKeough | photos by Jen May 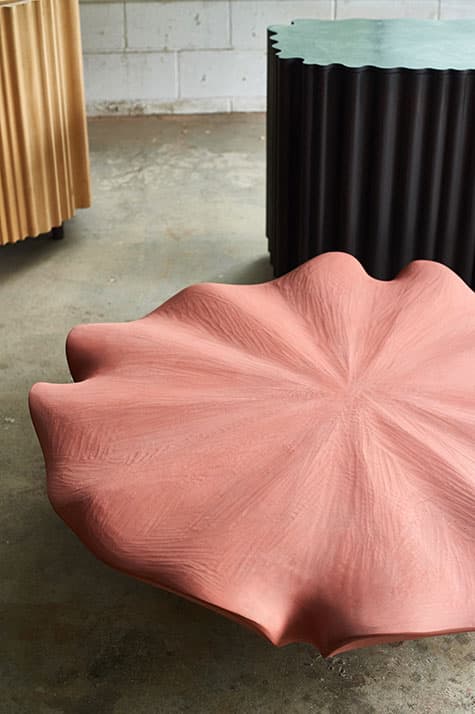 September 16, 2018The red-milk-painted Saddle table and black credenza are among the carved creations by Christopher Kurtz (portrait at top) featured in his new show at Patrick Parrish gallery, in New York.

Christopher Kurtz’s bewitching ways with handcrafted wood borders on the magical. Some of his creations, such as his monumental clusters of interconnected hand-carved spikes, can only be described as sculpture, while others, like his perfectly plain Quarter Round chairs, come off as sensible furniture. He sees no need to choose between art and design.

“For the most part, I don’t see much difference,” says Kurtz, 42, who works out of an industrial, light-filled studio near Woodstock, New York. “I use the same tools whether I’m making something that’s fantastical and poetic or designing a very functional chair.”

In fact, he views these two facets of his practice as entirely complementary. “I like the practical, engineering and structural concerns of furniture because it keeps me grounded. But then, I get a little restless and want to reach up for the stars, and the furniture work allows me to do that without completely floating away,” he says.

Sometimes, the yin and yang of this practice come together with surprising, discipline-spanning results, as in “Sculptures of Furniture: A Windsor Alphabet,” Kurtz’s current solo exhibition at Patrick Parrish gallery, in Manhattan (running through October 13). On the eve of the show’s the opening, Introspective visited his workshop to take a look at what’s to come. 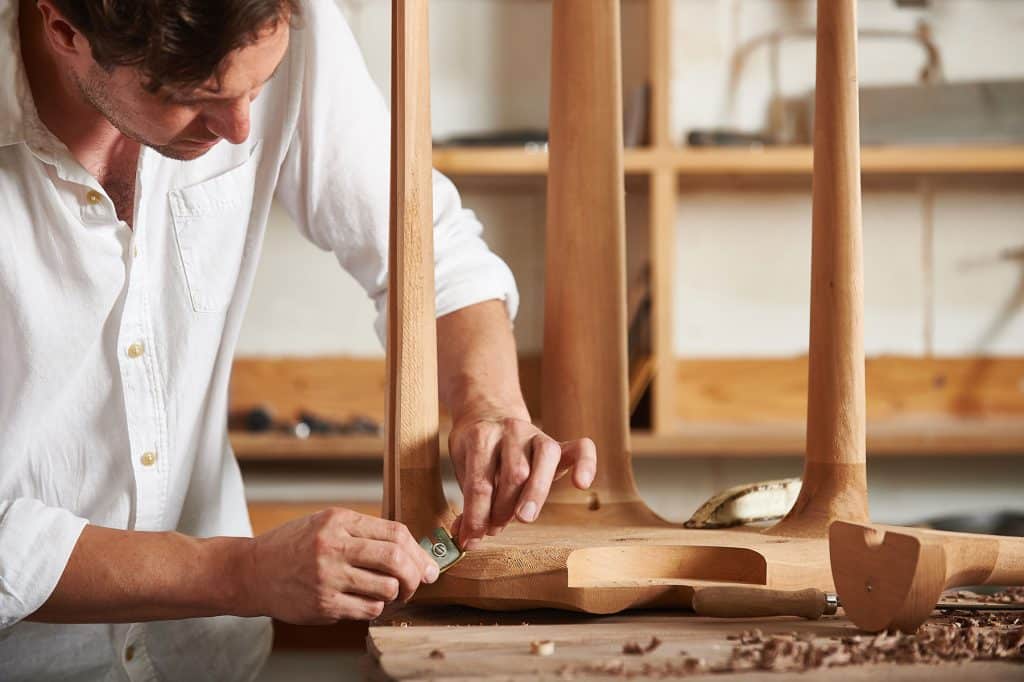 Here, Kurtz works on the cherrywood Pavilion stool in his studio in Woodstock, New York. ​He is carving with a luthier’s spokeshave, a tool typically used to make musical instruments.

At first glance, these new pieces appear to be inspired by nature. The yellow Duck Bill Miter bench swells from the ground like a beanstalk, and the rosy-hued Saddle table has a top that ripples like a flower petal. But spend a little time studying them and you might come to a different realization: Their forms were actually born from the components of the birdcage Windsor chair, originally made in Boston in the early 1800s. The Duck Bill Miter, for instance, recalls the crest rail on the Windsor’s backrest; the Saddle grows out of its wavy carved seat. 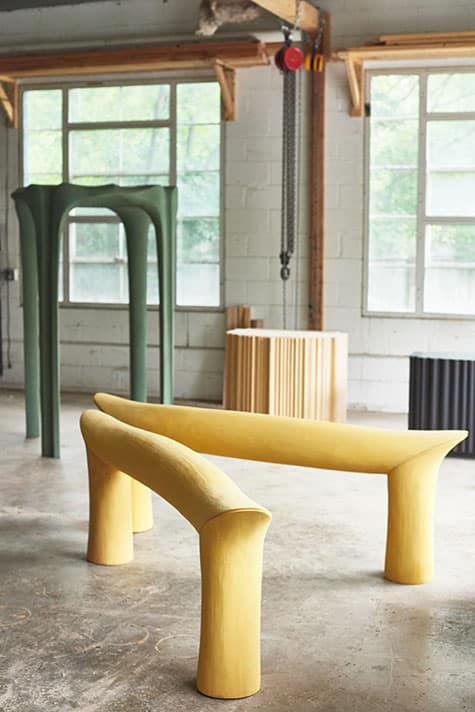 The shape of the yellow Duck Bill Miter “mimics the backrest, or crest rail, in Windsor furniture,” Kurtz explains. “But the function of the crest rail is reconfigured as a bench, thus challenging how we might engage with this object.”

“The birdcage Windsor seems like such an approachable, folksy piece of country furniture, but it’s so damn sophisticated,” says Kurtz, whose first furniture commission was a reproduction set of the chairs for a friend’s parents, in 2004. “It became an encyclopedia and muse for me. You can trace almost anything I’ve made back to that chair.”

The forms of Kurtz’s creations are amplified by his unwavering dedication to craftsmanship — a commitment that has made him a favorite among such architects and interior designers as Steven Volpe, Tom Kundig, Brad Ford and Michael K. Chen.

“He is an extraordinary artist and a master craftsperson,” says Chen, who has commissioned numerous pieces of furniture from Kurtz for client projects. “In his hands, wood takes on supple, biomorphic and uncanny forms. The pieces elicit an almost bodily emotional response when you experience them in person.”

Patrick Parrish echoes that sentiment. “Even after talking to him and handling the pieces, I still don’t entirely get how they’re made,” he says. “Even in the most polished, beautiful cabinet, you still see his hand.”

Although Kurtz spent his childhood in a farming community outside Kansas City, Missouri, he has been focused on making art for as long as he can remember. His parents are both artists, and his father was a longtime instructor at the Kansas City Art Institute. “I grew up on that campus, literally watching people make full-body plaster molds of themselves,” says Kurtz. “It was an environment where people were encouraged to manipulate materials and go after ideas that might look absurd to outsiders.” 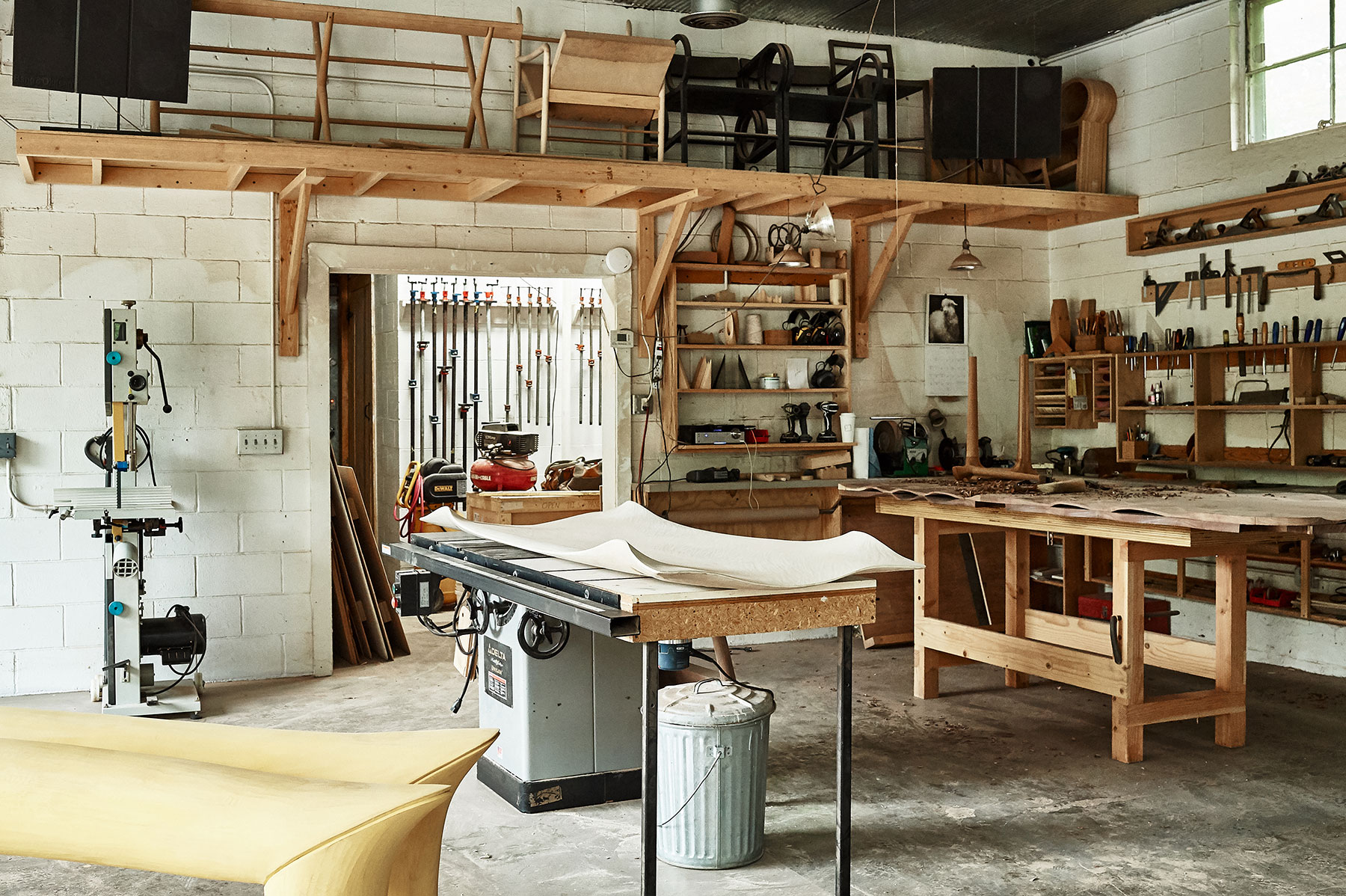 “My studio is a relatively simple woodshop,” Kurtz says. “I incorporate electric tools but rely heavily on hand-carving tools. For the most part, this shop would look familiar to the Shaker furniture makers and the Windsor-chair-making shops in early America.” 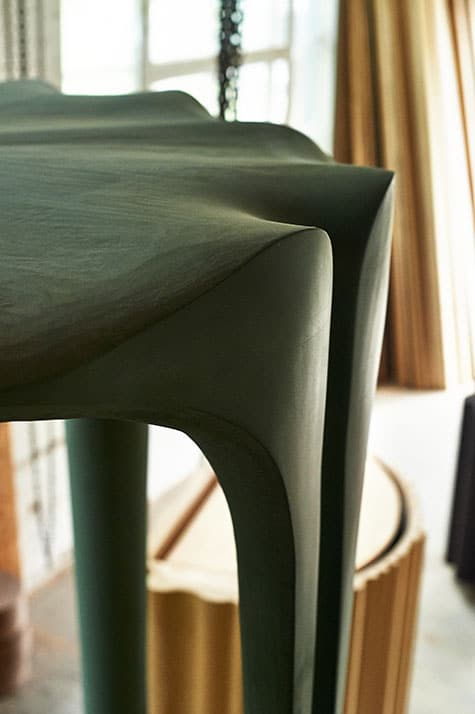 A detail of the six-foot-tall Pavilion sculpture showing one of its hollowed-out, bifurcated legs

So when it came time for college, there was no question about what he wanted to study. But as Kurtz pursued his fine art degree — first at the Kansas City Art Institute and then at Alfred University, in Allegany County, New York — he found a disconnect between what he was learning in the classroom and his desire to make things with his hands.

“At the time I went to art school, in the late nineties, the culture in art education was very post-studio,” he says. “Making objects was not really valued. We were being asked to do more conceptual works that engaged community activism, or ephemeral works like performances.”

Searching for a different focus, possibly as a land artist, he enrolled in a summer landscape architecture program at Harvard’s graduate school of design. There, he came upon a show of works by mid-century Italian furniture master Giò Ponti. “They had Ponti’s chairs exhibited on pedestals like sculptures,” says Kurtz. “I started to see design not as a product that you just buy from a store but as a collectible, significant part of culture.”

After graduation, he went to work in the studio of Martin Puryear, a sculptor who shared his appreciation for craft. “He had values similar to what I held dear,” Kurtz says. “It ended up being a five-year working relationship and a lifelong friendship. Martin is the most curious person I’ve ever met. I’ve never seen him become complacent or comfortable stylistically or technically. He will not imitate himself.” 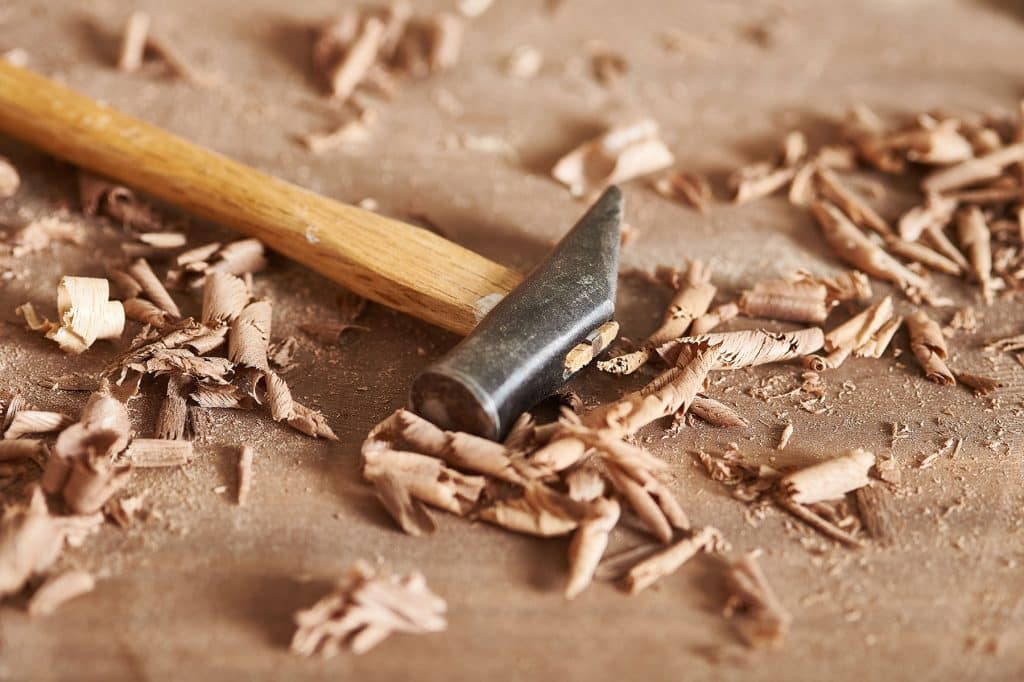 “This little hammer is something that I picked up in a hardware store in Japan and has a perfect balance in the hand,” says Kurtz. “It is a tuning hammer, used to tap the front or the back of a hand plane to decide how to adjust the depth of a cut while planing and carving.”

Working full-time in his own studio since 2008, Kurtz has walked a similar path, producing pieces with no definitive style. Some, like his three-legged redwood writing desk, have the organic appeal of Art Nouveau, while others, like the Inverness dining table, which has a top with holes that descend into randomly spaced hollow legs, have an almost futuristic appearance. On occasion, he translates his wood sculptures into other materials, including precision-made spiky brass objects developed with E.R. Butler & Co.

All Kurtz’s disparate works, however, have the same origin. “It’s always just a response to manipulating materials at the bench,” he says. “Every time I cut a piece of wood or use a spokeshave or a chisel, there’s a fork in the road — it could become a different piece.” In the wood itself, he adds, “there’s an endless supply of ideas.” 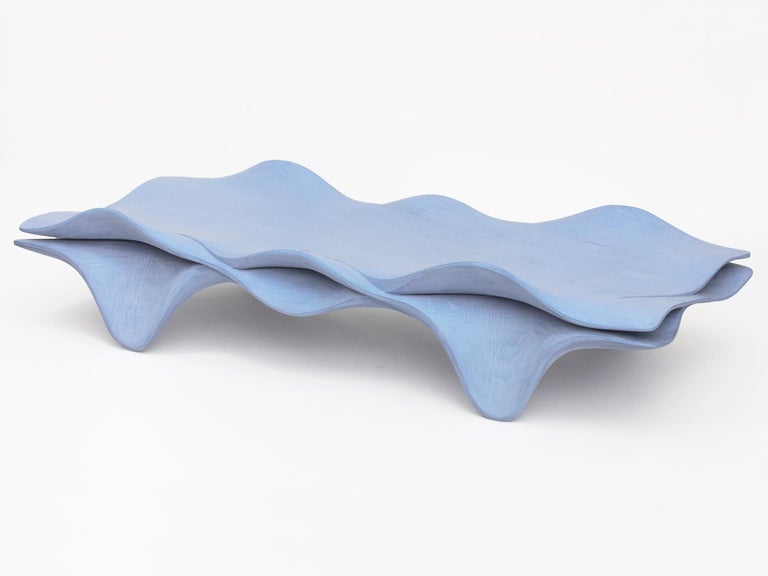 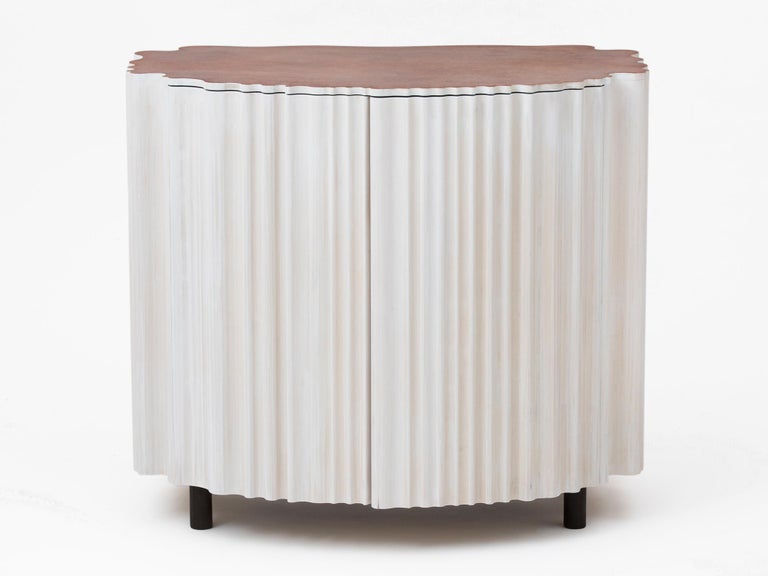 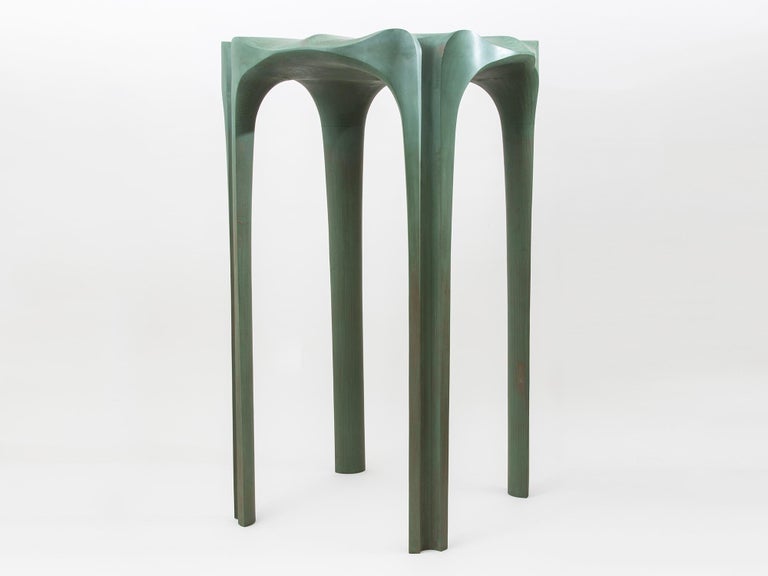 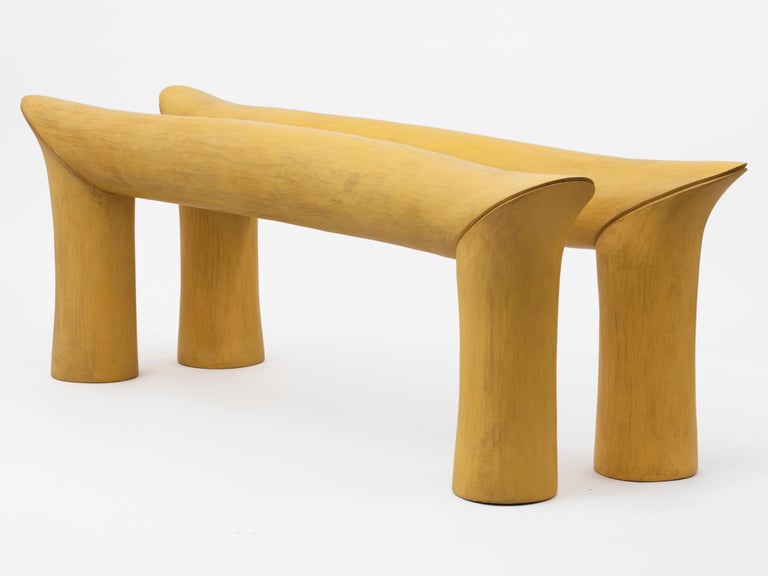 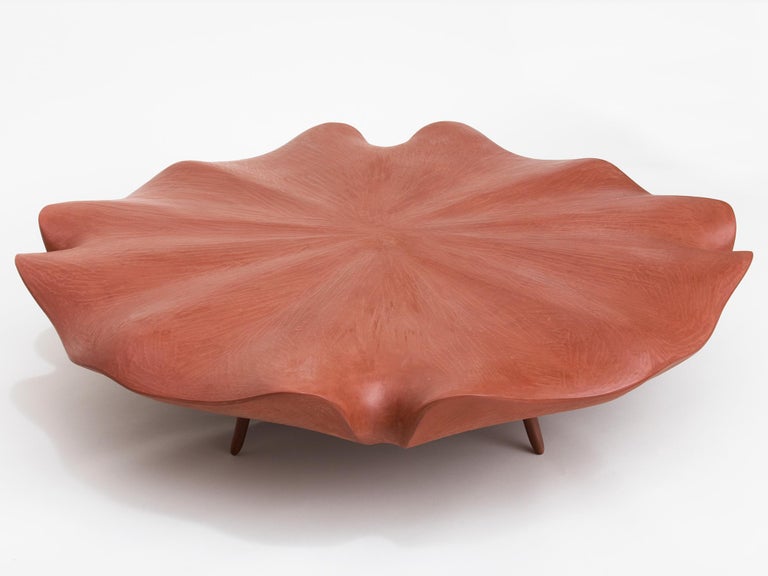 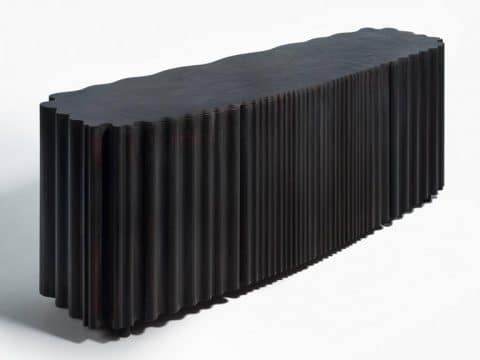 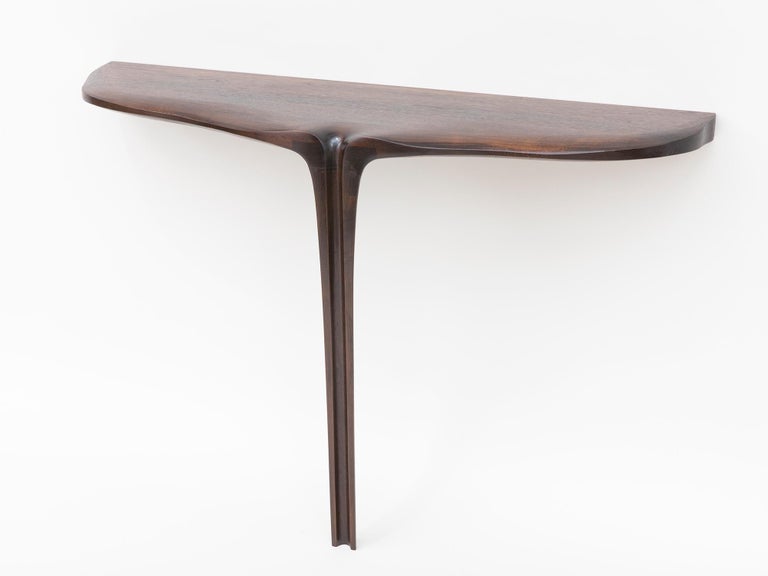 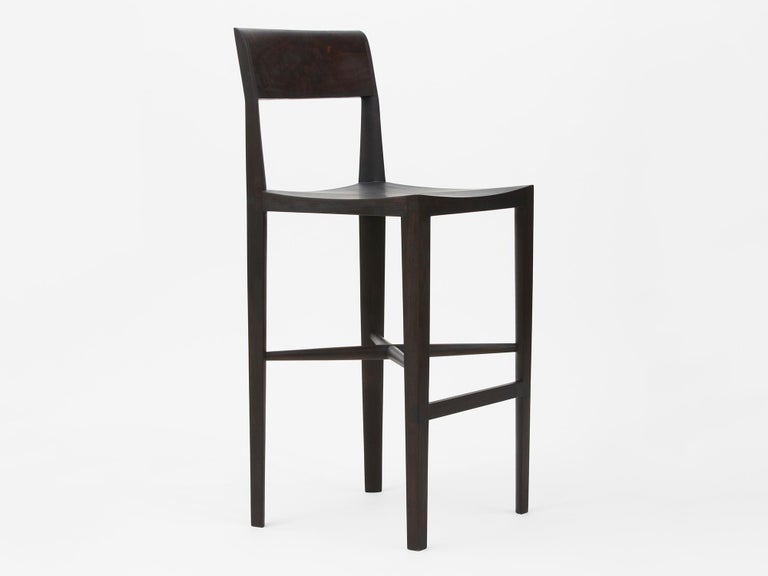 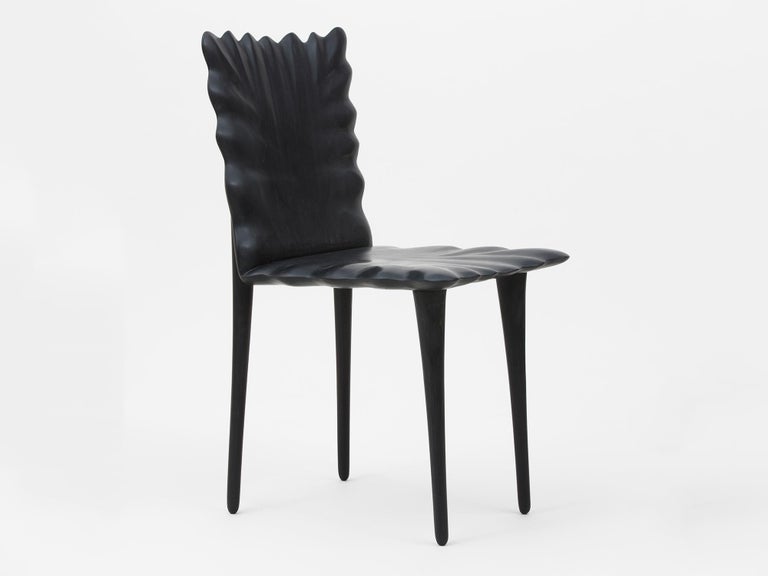 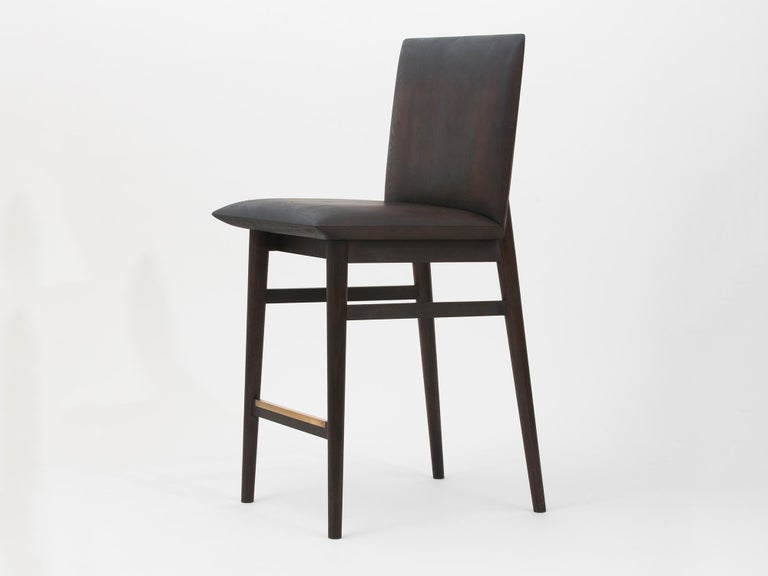 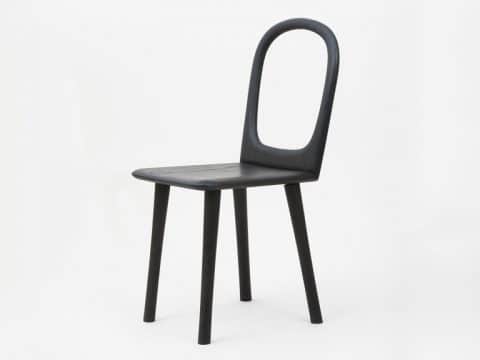 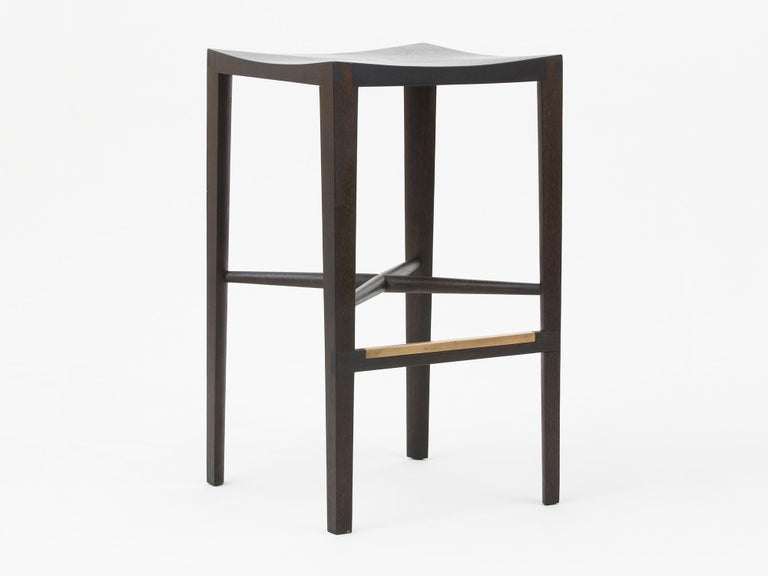 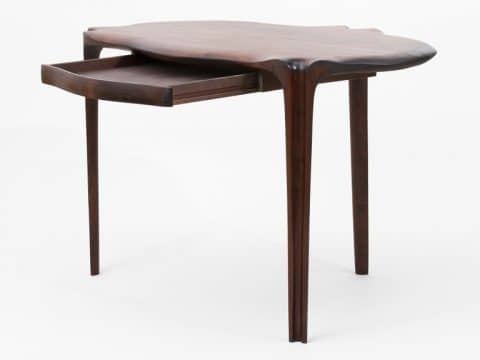