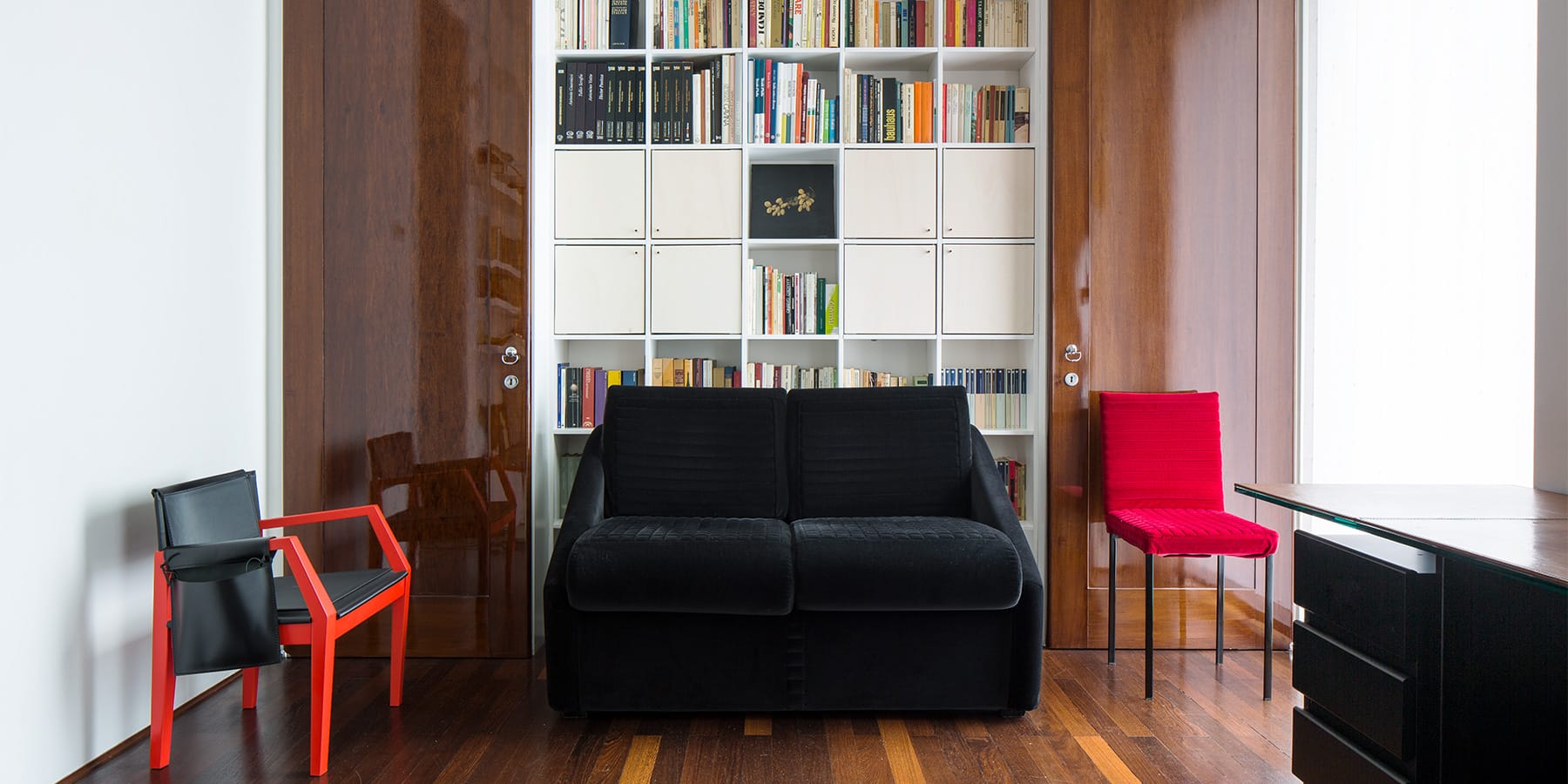 The Italian architect's longtime home is filled with antiques, family heirlooms and his own groundbreaking designs.

by David A. Keeps | photos by Filippo Bamberghi December 8, 2019

“Never ask the age of women,” Francesco Soro states, with a smile. “Or architects.” The Milanese design hyphenate — whose portfolio includes public buildings, private residences, hotels, interiors (including the showroom of Nilufar in the 1980s) and furniture for De Padova, ICF and Driade — is nonetheless a man of a certain age. Old enough to remember being a child during the British airstrikes on his native city during World War II, Soro earned an architecture degree from the Polytechnic University of Milan and emerged as a fresh new talent during the heady 1970s and ’80s heyday of international postmodernism, Italian minimalism and Memphis Milano design. 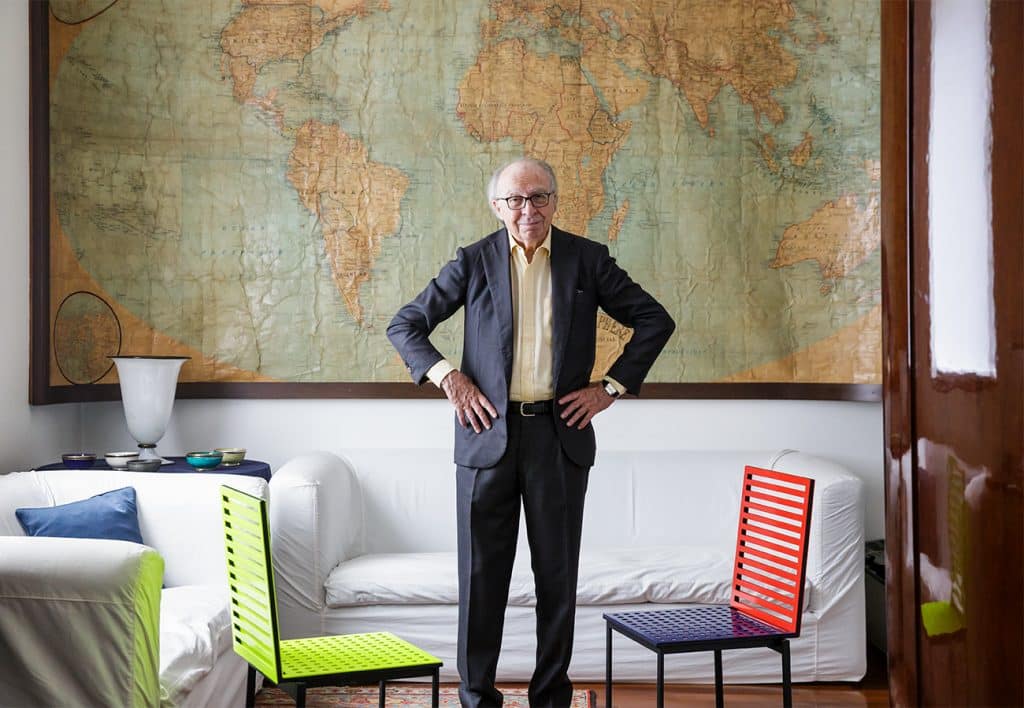 Architect Francesco Soro, in the Milan apartment where he has lived since 1978, stands between the fluorescent yellow and Manhattan versions of his 2014 Tanit chair; the slipcovered sofas are early studies for his 1981 Siglo XX design. On a draped round table between the sofas, a late 1980s Barovier & Toso lamp sits amid a collection of bowls. The 1930s French map, a gift from Soro’s father, was too long for the space, so he devised a curved frame for it. He mounted it as a focal point on the wall opposite the bedroom, “so when I get up in the morning, I can see the world,” the designer says. Top: Soro’s library features prototypes for a modular bookcase, desk and loveseat for the Tanit collection. To the left is his 2014 beechwood armchair, Lilith Up, which comes with a pocket that can be secured to the armrest to hold newspapers or magazines. “It’s the most beautiful thing,” he says of the chair’s reclining backrest. “When you are tired of reading, you can just lean back.” 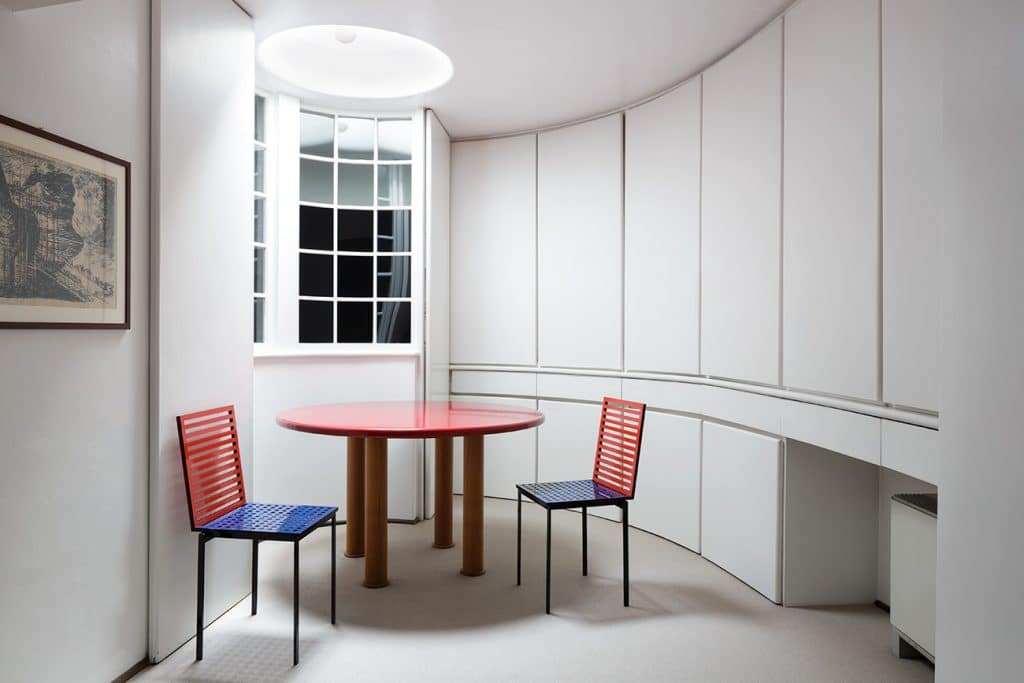 Soro reconfigured the apartment’s kitchen and this breakfast space with a circular sweep of cabinetry that complements the rounded bay of windows. Their curves are echoed in the 51-inch-diameter metal top of the designer’s dining-height Smalto table, finished in scratch-resistant enamel and supported by four teak columns. This piece is partnered with two Manhattan version Tanit chairs, whose color scheme is an homage to the U.S. flag. “Ever since I was born, I was always thinking about America,” Soro explains. “It was the mythology of my childhood.”

“It’s an extraordinary and effective way to reach people all over the world,” Pietro explains, acting as translator for his father (who speaks Italian, Spanish and French) during an evening of apertivi (prosecco and savories). “We hope that in the wide 1stdibs audience, there may be people who appreciate and fall in love with his original design philosophy.” 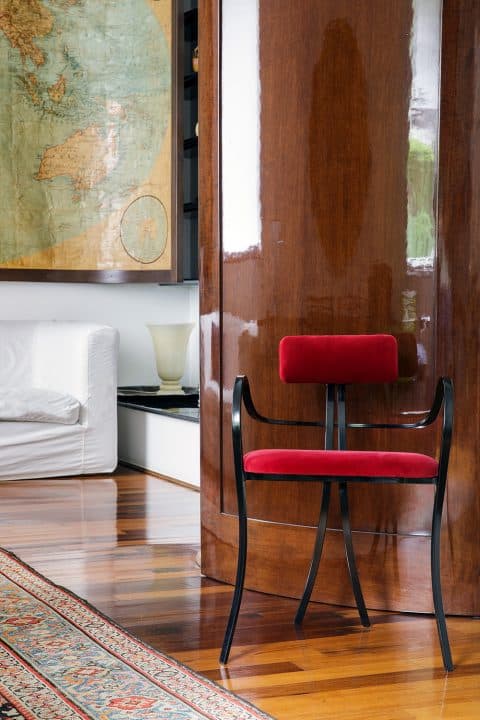 In front of one of the gleaming wooden doors in Soro’s library is a Violet chair in red.

Father and son share the same address, a mid-century apartment building on a leafy street near high-end furniture showrooms, living in separate one-bedroom units on separate floors. Both apartments, which were connected to serve as the family home when the architect’s children were growing up, display Soro’s aesthetic signatures: rigorous spatial planning, stately-yet-inviting proportions and scale, dynamic interplays of rectilinear and curved volumes and the elevation of humble materials and surfaces.

Soro could not have found a more appropriate place to call home. The building was designed in the mid-1960s by Luigi Caccia Dominioni, the acclaimed father of postwar Italian modern architecture and founder and chief designer of the iconic furniture brand Azucena (now owned by B&B Italia). Soro discovered it in 1978. “I walked in and looked through the window, and there was snow in the garden,” he recalls. “I thought, ‘This would be the place for my life.’ ” 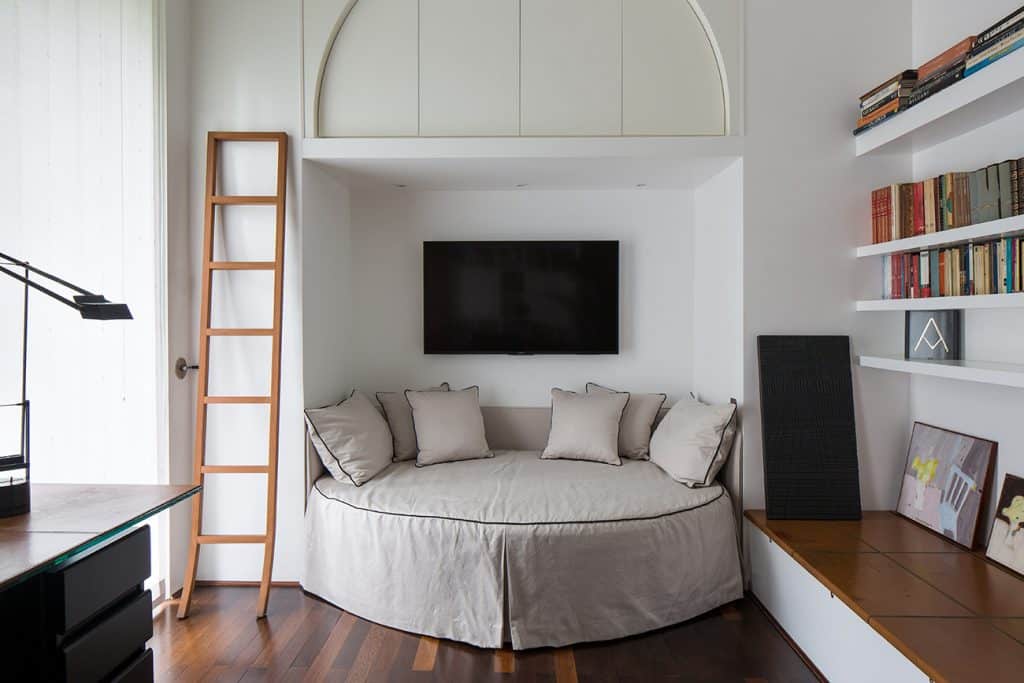 Soro’s design for a circular divan references the arched millwork above it. The teak ladder, he says with a wink, “is useful for hanging up dresses.” To the right is a black Urano Palma artwork, resting against the wall next to a shelf holding Soro’s Golden Compass award. The desk, a prototype, holds a Tizio table lamp.

Soro reconfigured the original long but narrow (around 16 feet wide) floor plan, dividing it with symmetrically placed tall, skinny polished wood doors and built-in bookcases that create distinct spaces. “Order and discipline, executed with accuracy, creates harmony and balance in a home,” he explains. “Establishing that frees you to include objects of various kinds, taste and age.” 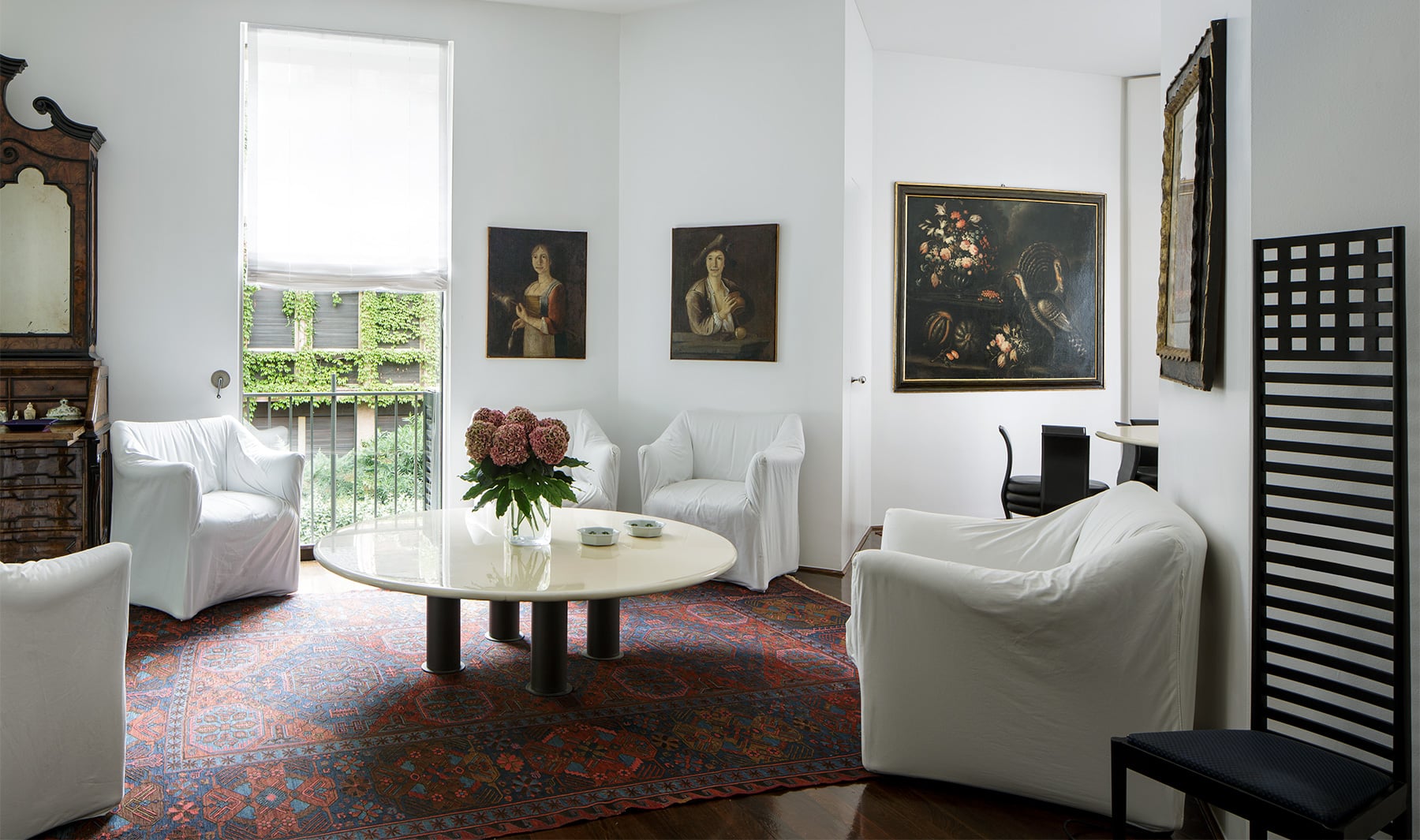 Proof that minimalist interiors need not be cold, hard or boring: Identical Soro armchairs float on a massive Persian carpet around the coffee table version of his updated 1990 Smalto design. Offsetting the contemporary pieces are antique accents: on the left, an 18th-century secretary; on the right, a high-back chair by Scottish architect Charles Rennie Mackintosh, which had a clear influence on Soro’s Tanit chair.

After 40 years, Soro’s home has become a repository of design and decoration, documenting his life through a mix of antiques, sentimental family heirlooms (including a massive 1930s world map his father gave him and a painting by his mother) and prototypes and production pieces from his decades of exploration in furniture design. During our visit, we settle into early renditions of his groundbreaking Siglo XX, a slimmed-down, slipcovered version of a Chesterfield sofa that sits on a steel armature. Despite its traditionally British shape, Soro says, the piece is “not too imperialistic, more Milan than London.” 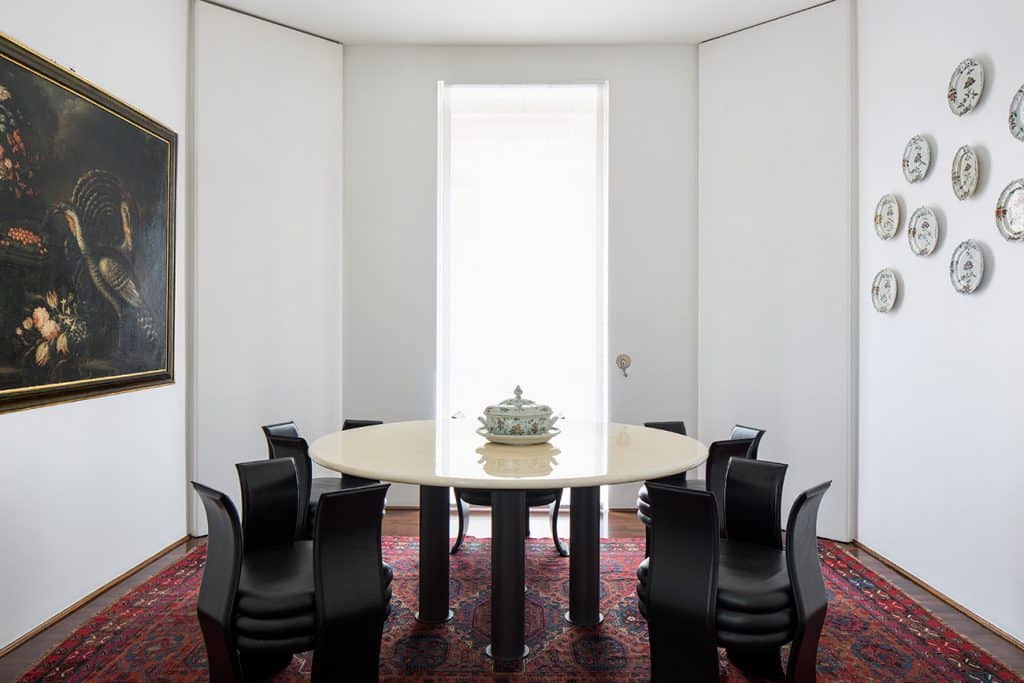 In the dining room, Soros’s  curvaceous and columnar Dame de Coeur armchairs form an elegant composition with an iron-legged, marble-topped 19th-century Lombardy table. Mounted on the right-hand wall, the decorative floral dishes that Soro’s wife found in an antique shop form a light counterpoint to the dark still-life painting opposite.

For connoisseurs of Italian modernism, the design is a classic. “I’ve had two,” says Milanese gallerist Rossana Orlandi, “and they are the most comfortable sofas I’ve owned.” Designed for De Padova, the Siglo XX earned Soro the ADI Golden Compass award in 1981. “It is the Oscar of architecture,” he notes in perfect English. 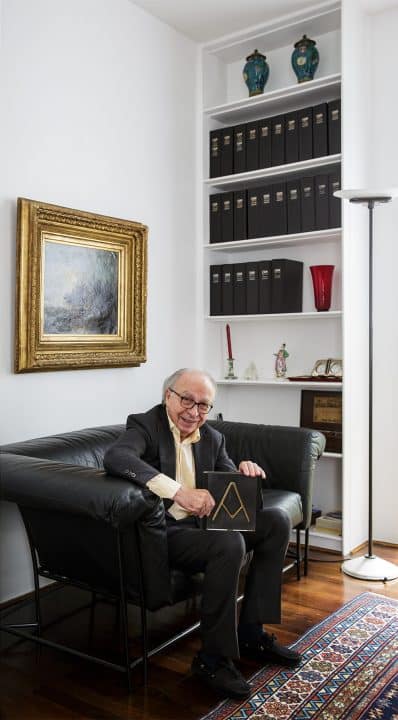 Soro, who created a 1stdibs exhibition in Milan’s tallest building, Torre Breda, during Salone di Mobile 2019, sits on a leather version of the Siglo XX sofa; its design earned him the prestigious 1981 Golden Compass award he is holding. The pre-Impressionist painting above him and richly toned Persian rug under his feet add warmth and color to the space.

Raised in a household that married art and commerce — his father, Giuseppe, managed the family’s textile company, for which his mother, Piera, designed fabrics and dresses — Soro grew up obsessed with rugby and automobiles. (To this day, he has vintage rugby balls and handmade wooden cars on his sitting room shelf.) He was also fascinated with the colors and textures he encountered at the family fabric store, and his strict Catholic school education sparked an interest in Greek and Roman classicism.

“In the beginning, I was afraid of architecture,” Soro admits. “It was massive and huge. Then I had a professor who was good friends with Le Corbusier, and he said, ‘To be an architect you need to travel.’” After a trip to Ibiza, where he developed the urbanized masterplan of a golf area, Soro began a long-term collaboration with the renowned architect and industrial designer Vico Magistretti, hitting his stride with residential commissions on the same Spanish island. “In the nineteen seventies,” he remembers, “there were no celebrities there, only Pink Floyd. There weren’t warehouses with building materials, so you had to be very creative.” Accordingly, Soro embraced what postwar Italians called arte povera (poor art, or folk art). “That means being brave enough to use very simple materials that last many years.” he explains.

He also produced custom furniture for his projects. “I am an architect,” Soro declares. “My generation never used the word designer. We would use our pencils and go to craftsmen with our ideas. They were created in that moment.” 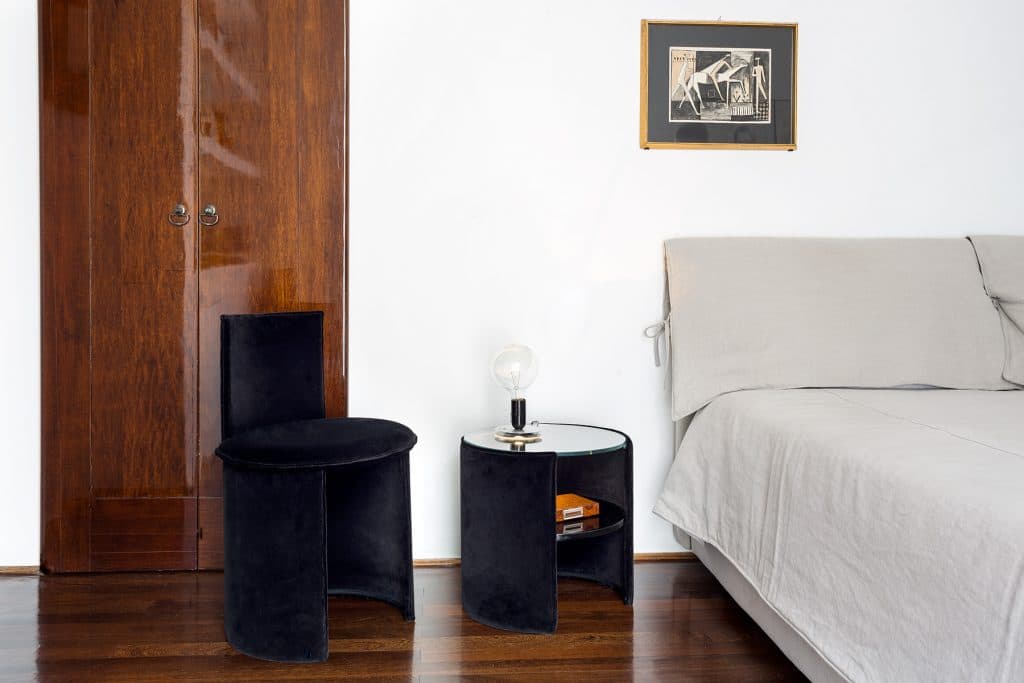 A minimalist cocoon, Soro’s monochromatic bedroom features two of his designs: a Drum chair and a prototype for his Drum table, each of which is made from a curved sheet of birch paneling and can be clad in leather or velvet. On the table is a classic FLOS Lampadina by Achille Castiglioni. A 1955 Gianfranco Ferroni artwork hangs above the bed. 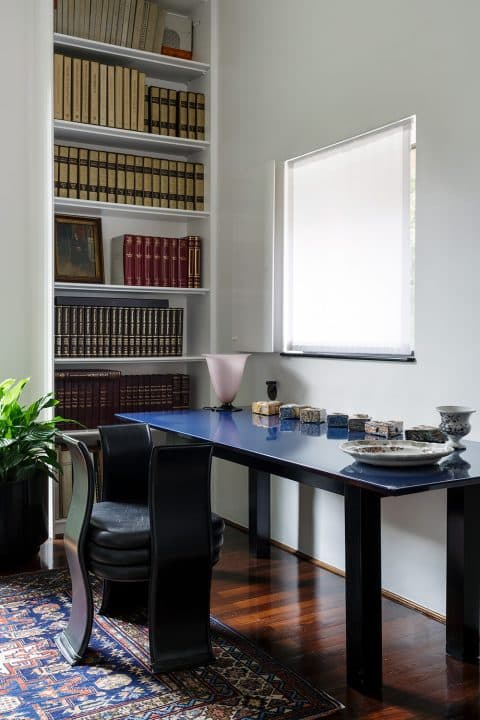 Soro’s Dame de Coeur armchair, ca. 1990, sits at a console that doubles as a writing table. It holds a collection of 18th-century Talavera boxes from Madrid.

Widely published in international design magazines, Soros’s Tanit chair is a masterful geometric structure, referencing ladder backs and woven seats with aluminum stripes and grids, that is lightweight yet uncompromisingly sturdy. The versatile composition allows for customization, with natural, beige and black versions, as well as a fluorescent yellow and a red and blue one, which evokes the stars and stripes of the American flag. For added comfort and style, the Tanit Soft chair comes with a channel-quilted cover in velvet or linen.

Collage has also given Soro the opportunity to revisit and refine earlier creations. His latest edition of the glass-topped Jonathan table, first designed in 1978, includes a Mondrian version in which the three metal rectangles that form the base are epoxy coated in yellow, red and blue. He has also updated the 1992 Violet chair — a Jean Royère–esque construction sporting a ribbon-like frame that, he says, “recalls the sinuous, rounded shapes of a woman” — with velvet upholstery and a backrest that adjusts for comfort.

Soro motions for me to try it. In contrast to the Tanit chair, which supports an attentive upright posture suitable for dining or work, the Violet is a seat for languid repose. I sink into it and mimic kicking off my shoes. “Bravo!” Soro says, waving his hands with a flourish. “Amore. Love of materials, love of good taste, the chair you are sitting in. This is what makes a house a home.” 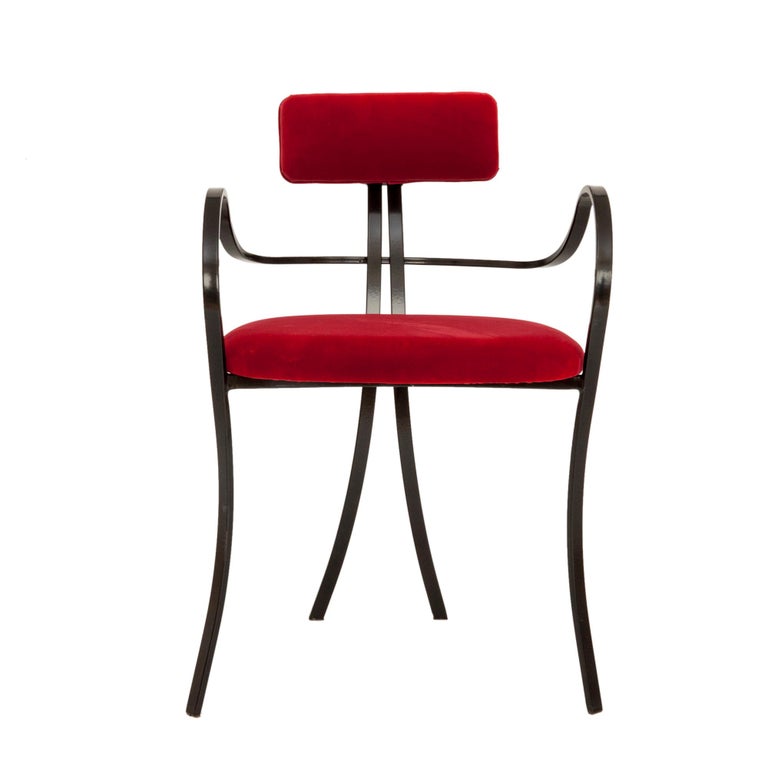 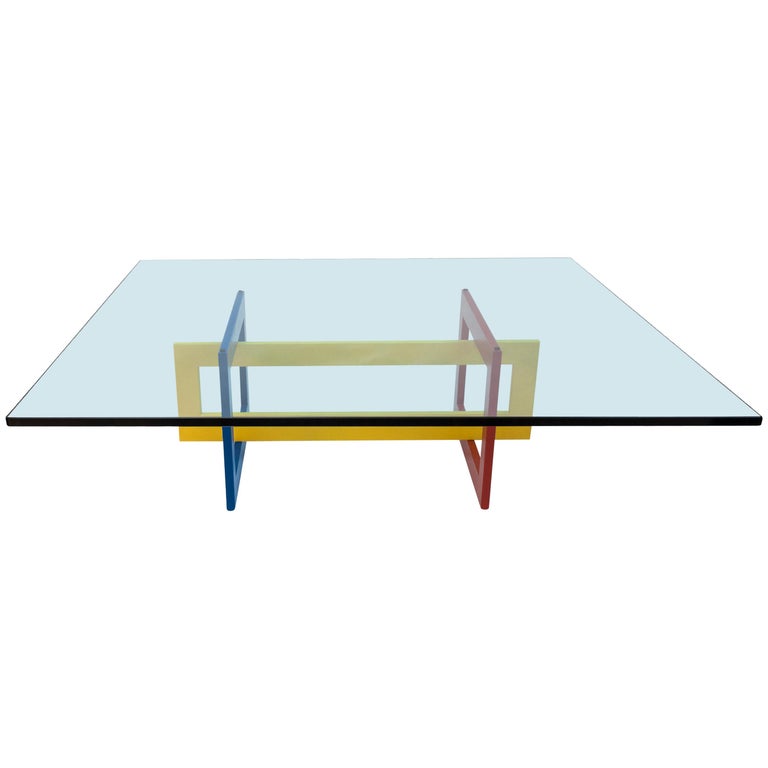 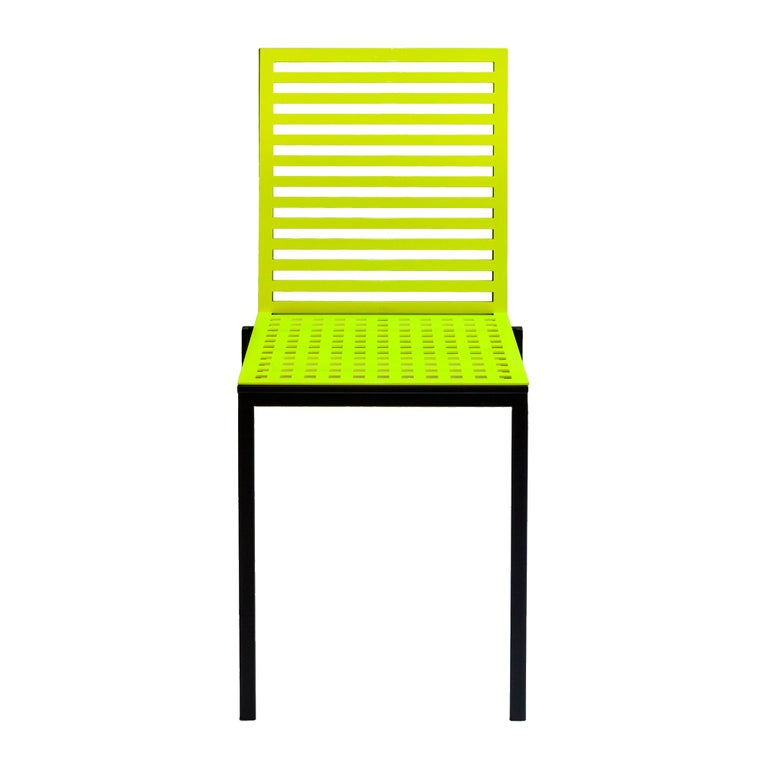 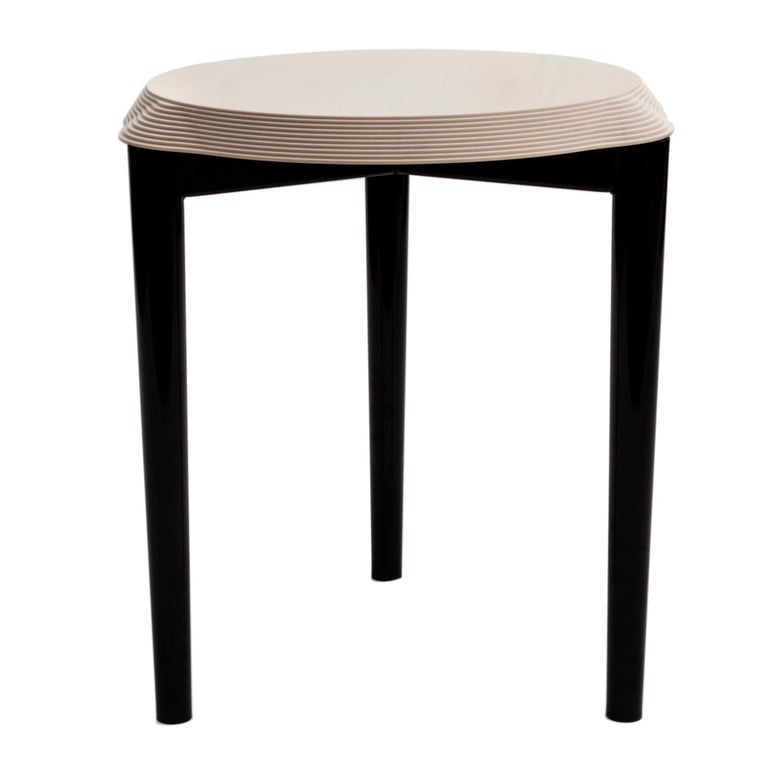 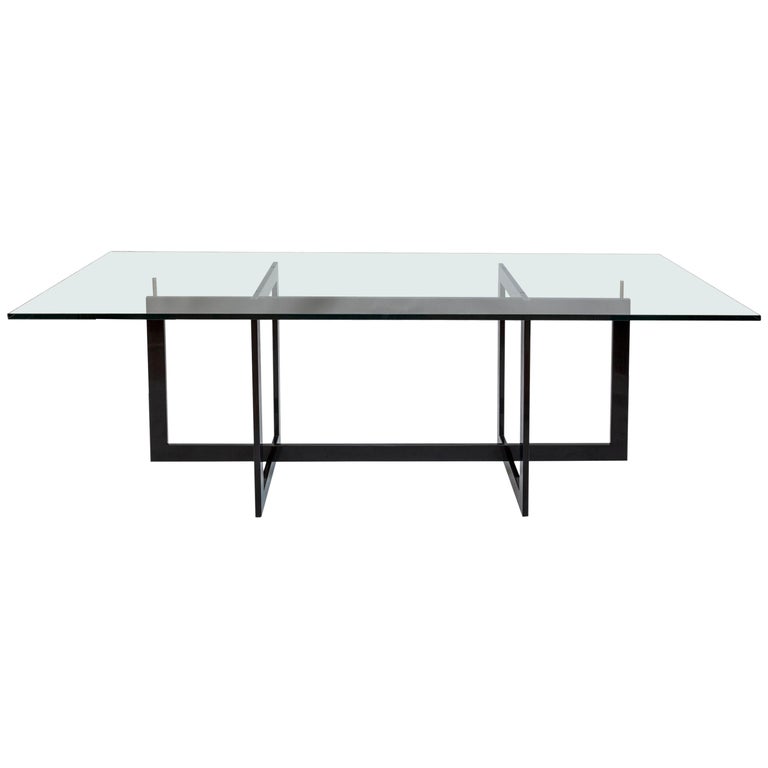 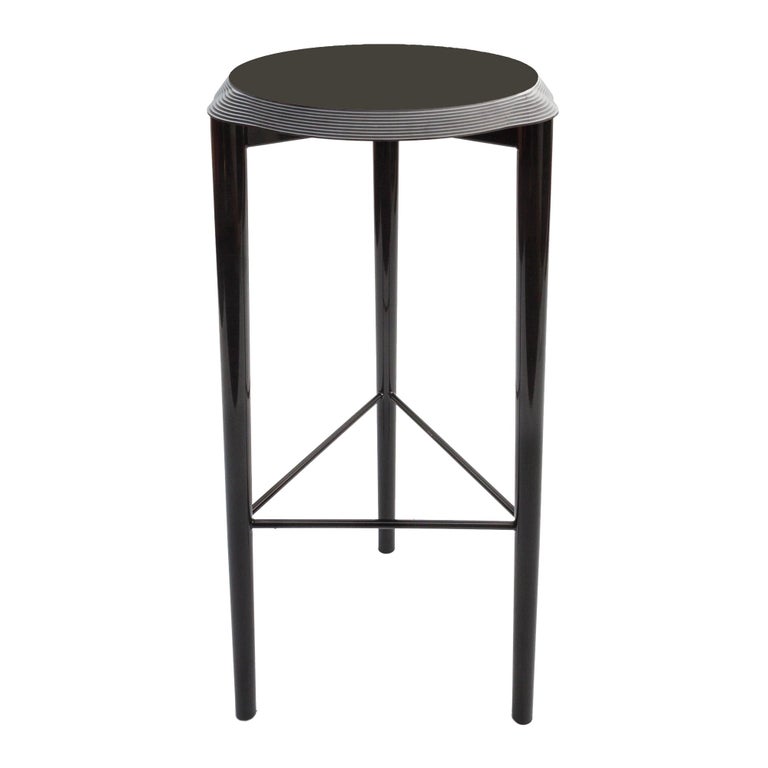