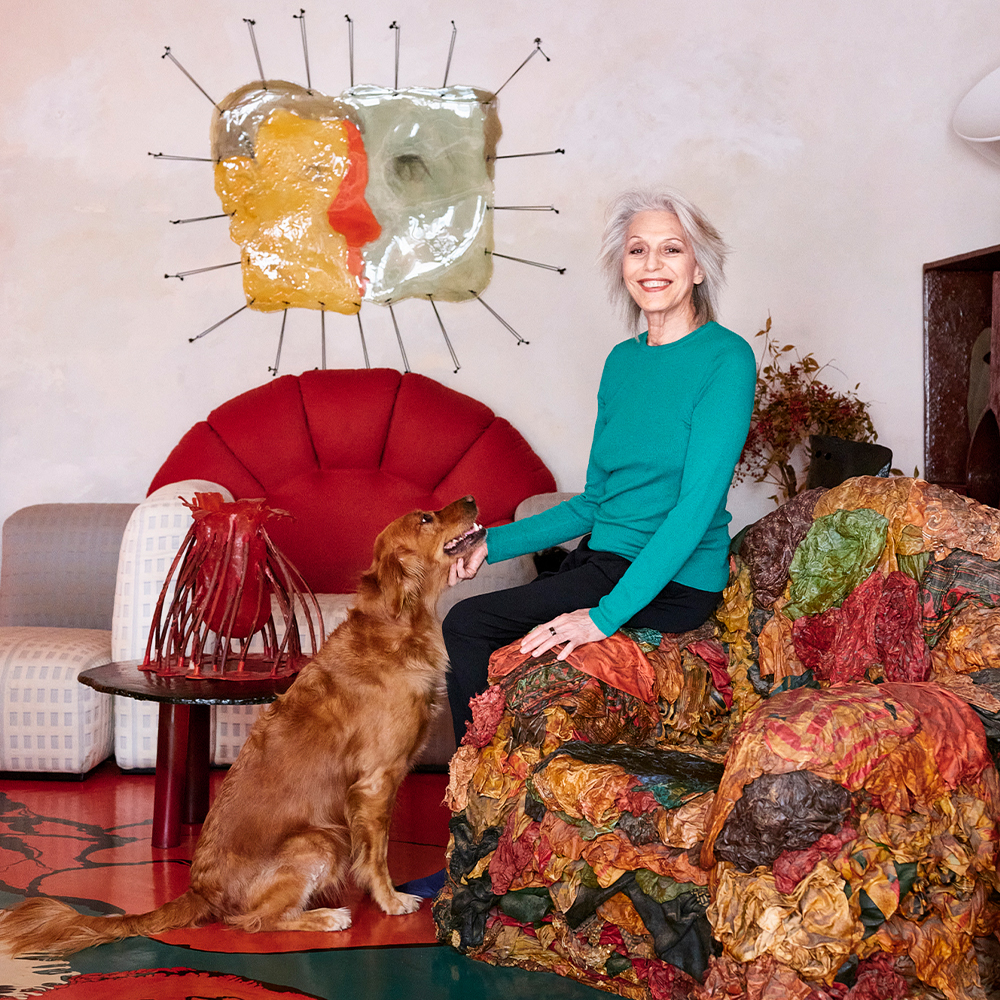 Over the years, Shuman has filled her Park Avenue penthouse with the Italian designer's radically colorful creations. Here's how it all came to together.

June 6, 2021Entering Ruth Lande Shuman’s Upper East Side apartment in a formidable prewar building is like walking into an abstract painting: You’re immediately immersed in a riot of colors, swirling lines and biomorphic forms that extend throughout the rooms. It’s a far cry from the height-of-chic International Style in which Shuman had decorated the space. That was before she met avant-garde Italian architect and designer Gaetano Pesce, who took one look at the colorless rooms and asked, “Why doesn’t this home look like you?”

She quickly hired him to redo it, a decision that also started a 30-year pursuit of his work, including prototypes of some of his most famous (and radical) furniture designs.

The apartment, with its happy rainbow of floors, walls, doors and furniture that sprouted from Pesce’s prolific imagination, could be a project from Publicolor, the organization Shuman started in 1996.  An outgrowth of her postgraduate work on the psychological effects of color, the not-for-profit uses color and design to engage students at some of the city’s most challenged public schools, enlisting them to repaint their classrooms in bright, sunny hues.

On a recent rainy day, we sat on cheery matching Canareggio sofas designed by Pesce that, Shuman says, “envelop you but always make you feel supported,” and discussed what it’s like to live in and with so much color.

You met Gaetano Pesce in 1989 when you were a graduate student at Pratt, studying industrial design. What were your first impressions of his work?

I went to his workspace in Soho, filled with huge gorgeous drawings and his “skins” — drawings in resin — and his Canareggio sofa was there, too. It was an explosion of energy and color, and it felt primal to me. The space touched me deeply and reminded me of the Four Corners area in the Southwest — the warm colors and the natural forms in that part of the country.

Through him, I have become much more interested in new materials and new methods of construction. He’s always experimenting with materials and technology. He used industrial felt for the Feltri chair. Instead of arms, he used one piece of felt for the whole chair, with the sides wrapping around you like a blanket.

I had never seen anything like his work before, and I loved the sense of discovery that I still feel every time I see something of his. There is also humor and great personality to his work.

You see that humor and personality everywhere in this apartment.  But that’s only one aspect of his work. What else speaks to you?

He’s provocative, and he’s antiestablishment. Who was using color back in the sixties, seventies, eighties? Nobody! Who was using new materials? Nobody!

I do believe he was the father of design as functional art. There were some wonderful Italian designers — Vico Magistretti, Achille Castiglioni, Mario Bellini — working at the same time, and they made beautiful objects. But they weren’t making a statement about reality or current events in their work.

Gaetano’s work often incorporates a political statement. Even when not, there’s a layering of meaning. It’s not just what you see. There’s more to it.

When I look at his pieces, I feel like there’s something melting, there’s something soft. The legs of his tables and the back of his chairs can wobble and be pushed back — the movement, the flexibility. Being flexible is such an important quality in our lives.

What are some of the most interesting pieces in your apartment?

My first piece was the first Rag chair he made. And I just loved it because he made something beautiful from things — old rags — that had been discarded.

There’s a bit of a parallel to what eventually became Publicolor, focusing on students who are overlooked and at high risk of dropping out of school and seeing great potential in them. And empowering them for success in school, college, work and life.

The Sunset in New York sofa is really beautiful. In the mid-nineteen eighties, Pesce was traveling a lot to Japan and was really concerned that Japan was going to eclipse New York as the leader in the design world, and that really touched me. He made something incredibly beautiful out of that expression of concern.

The green chair in the library with the things sticking up is from a line called Nobody’s Perfect. I love that thought. And what’s magnificent about the Nobody’s Perfect line is that the pieces come apart and are shipped to you in a flat box, so the shipping doesn’t cost much. And then you can put it together easily, because it’s so simple.

Do you still have pieces on your wish list?

I don’t have any room for it, but I would like an Up chair. The Donna Up chair is a masterpiece. He designed it fifty-one years ago from his observation that women are imprisoned by men. The chair looks like a woman’s torso, and there’s a ball as the footstool, but that ball is connected to the chair with a chain.

It’s made with foam and comes in a little package with a zipper and when you unzip it, it fills up with air and becomes a huge life-size object. Nobody is doing anything like that even today. Recently, the city of Bologna asked if it could have a huge version of the chair to celebrate the Year of the Woman.

What would you advise someone who wanted to have an apartment done by one designer? How do you make sure your space is representative of you?

You really need to work with someone who is able to create a three-dimensional portrait of you. A lot of designers are stuck in their style, and so each residence they design looks like all the others they designed. Some friends were shocked when they first saw this apartment after Gaetano designed it.

There’s a lot of energy here, which perhaps captures mine. And supports it too! And there’s color. People who know me would say that I certainly am not beige! Many, though, are afraid of color. For me, color is energy, it’s joy, it’s inspiration, it’s safety. It’s happiness and warmth.  When it envelops, it makes you feel protected. But color is like music — you have to know what you are doing.