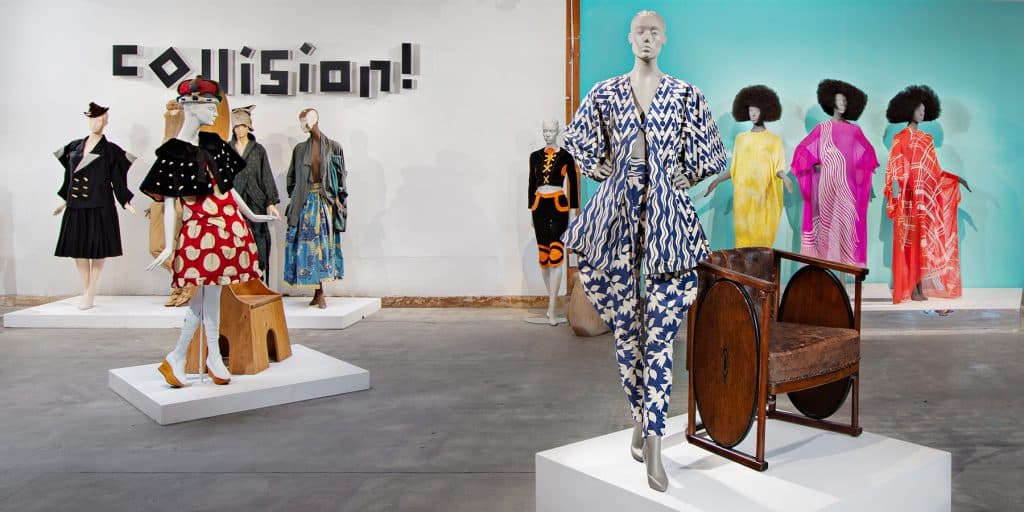 Bianca Chen and Lynn Pickwell explore more than a century of functional and decorative design in their Los Angeles exhibition. 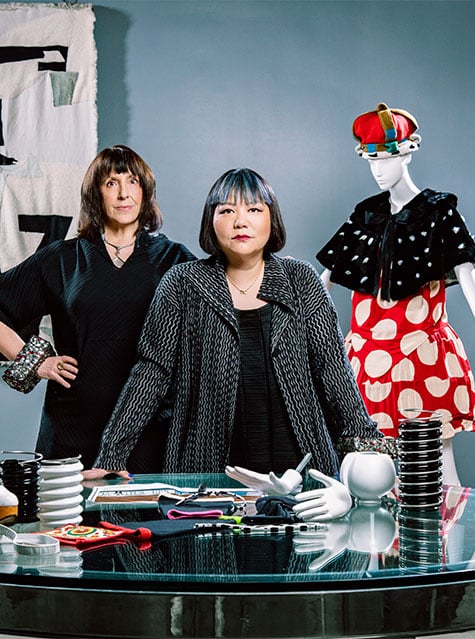 April 21, 2019Lynn Pickwell and Bianca Chen curated “Collision,” now on view at JF Chen’s C Project gallery, to showcase exceptional fashion and furniture. In the background is a mannequin in Vivienne Westwood‘s 1985 “Mini Crini” dress, cape and crown. Top: The exhibition features pieces like Alice Pollock’s ca. 1965 blue-and-white dove-print ensemble and Josef Hoffmann‘s 1907 No. 422 inlaid armchair in beechwood, marquetry and leather. On the right, a trio of mannequins are wearing caftan dresses by Halston. All photos by Ben Easter

“We’re so into fast fashion, fast furniture and Instagram feeds these days,” Chen declares. “This show reminds the world of the enduring power of design.” 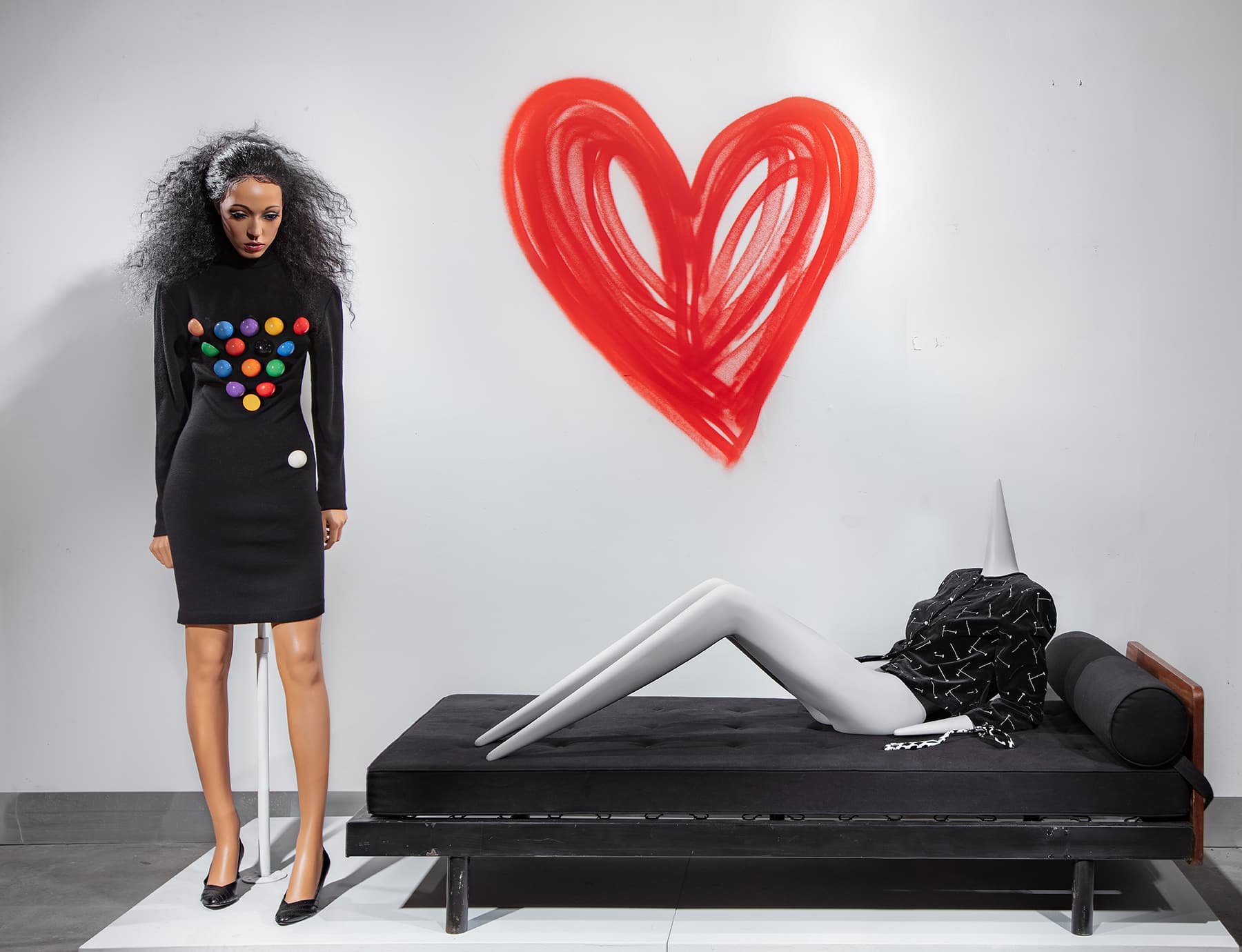 In a display showcasing the late 1980s designs by Patrick Kelly, wood-and-metal Jean Prouvé daybed is among the classic mid-century pieces highlighted in the show.

“We are creating a new dialogue, a new way to view the past and look toward the future on 1stdibs,” adds Pickwell, who will be selling selected pieces from the show on the site. A former costume designer for pop music giants and filmmakers like Bruce Springsteen and David Fincher, she now advises collectors and makes documentary videos. One of her videos, on mirror and glass-jewelry designer Andrew Logan, plays during the exhibition.

“In mounting “Collision,” Pickwell proclaims, she and Chen are “not trying to replicate a million-dollar boutique or a museum.” In some ways, however, “Collision” outdoes both types of venues, revealing commonalites between furniture and fashion through harmonious couplings like that of a highly textured 1990s Comme des Garçons dress by Rei Kawakubo and an “Abakan” ball sculpture by Magdalena Abakanowicz. “They are both fiber-art pieces,” explains Chen, noting that the exhibition showcases Kawakubo’s talents in both fashion and furniture design. “She created the most amazing table in 1985 made from two two-tone triangles that split in half, so Lynn got this 2007 black-and-white Minnie Mouse outfit, so named for its three-D appliquéd hands, and posed the mannequin with its feet turned in coyly like a Nobuyoshi Araki photograph.” 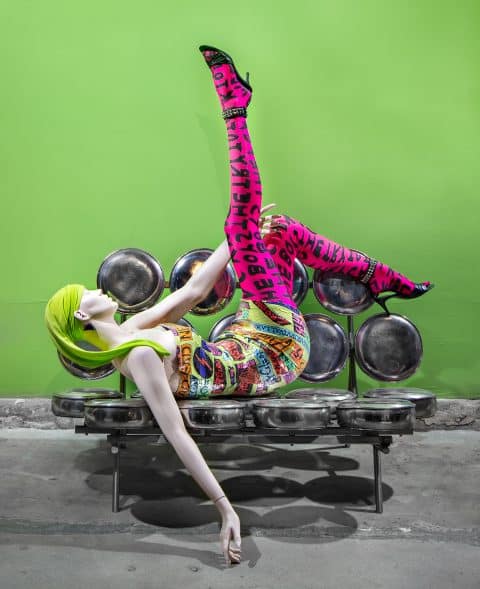 A mannequin in a Stephen Sprouse ensemble reclines on a Cheryl Ekstrom’s stainless-steel version of George Nelson‘s Marshmallow sofa.

In addition to making obvious connections — Noguchi furniture with an early Miyake cartoon shirt and reed belt, a voluptuous Rudi Gernreich unitard adorning a mannequin perched on a prototype of architect Greg Lynn’s undulating Ravioli chair — Chen and Pickwell have created dramatic abstract displays that challenge their audience and each other. Pickwell, for instance, had never seen Fernando and Humberto Campana’s Favela chair, which looks like a ragtag construction of kindling wood. “I didn’t quite understand it,” she recalls. “And Bianca kept walking by it, and I said, ‘You’re putting that with whaaat?’ ” Chen’s chosen pairing was with an ensemble from Vivienne Westwood and Malcolm McLaren’s 1982 Punkature collection featuring Keith Haring graffiti.

“The chair is chaotic, and so is the outfit,” she explains. “When I found out that it was called Witches, I thought of witches burning at the stake.”

As dishy as she is scholarly, Pickwell understands how fashion designers function as provocateurs. “In the early nineteen sixties, Paco Rabanne did what Marcel Duchamp had done with his painting Nude Descending a Staircase,” she notes. “Rabanne released what he called Twelve Unwearable Dresses, sending models down the runway barefoot in space-age chain-mail dresses that weighed a ton. People were horrified.” 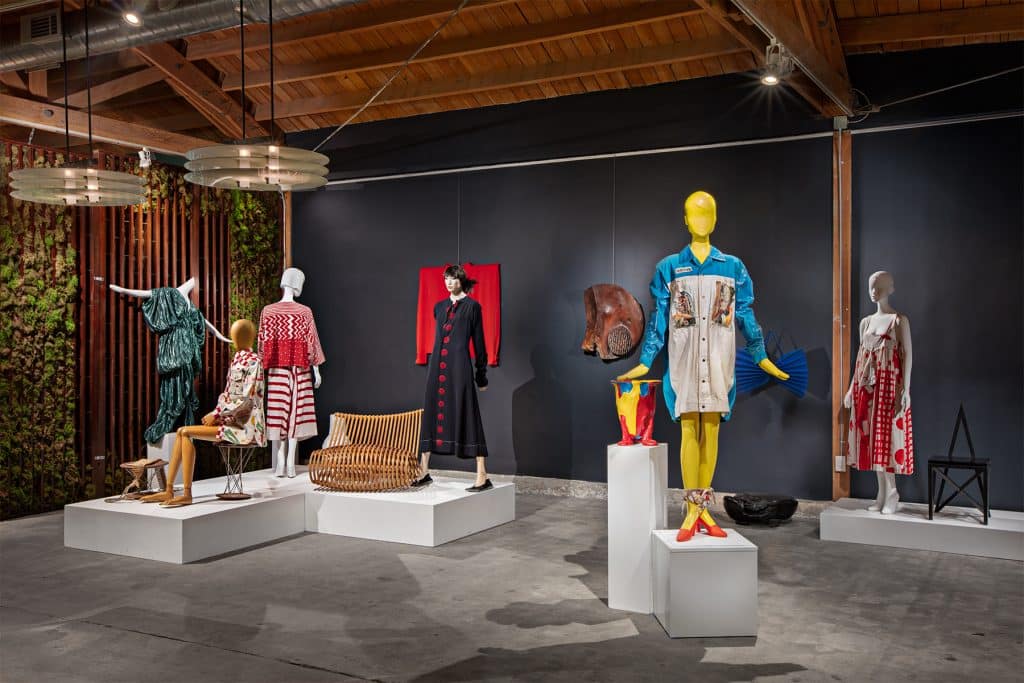 Just a few years later, however, the French label Robe K produced a Puzzle dress made of interlocking pieces. “It came in a can with instructions, so women could use their imaginations and make their own outfits,” says Pickwell, who fashioned the parts into a mini dress for the show. “My first reaction,” Chen says, “was ‘Who put it together?’ and Lynn said, ‘I did, and, trust me, it’s never being made into anything else.’ ” The dress is partnered with Spootnik, an audio speaker resembling a space-mission rover that was recently released by Hervet Manufacturier, longtime collaborator with Daft Punk. “It’s all very futuristic,” Chen adds. 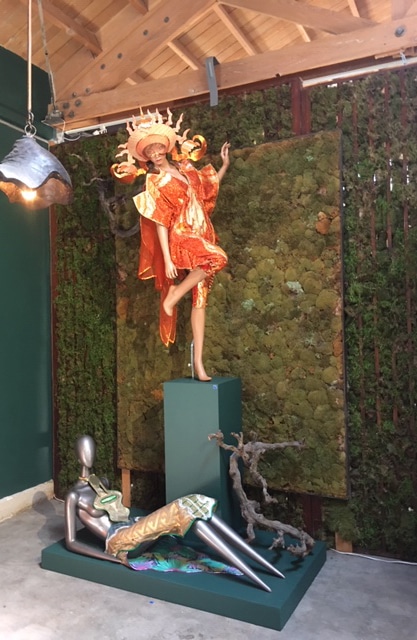 A black-walnut lamp by Michael Wilson hangs over mannequins sporting Kaisik Wong designs and posed against a moss wall, a nod to Kaisik’s love of nature.

Pickwell mined the past, as well, uncovering obscure gems. Among these is a demure, solid-color raw-silk dress by Emilio Pucci, who was famed for kaleidoscopic prints. “We call it the un-Pucci,” the fashion curator says with a smile. “We wanted people to walk around it and say, ‘What the hell is this?’ ” She also pays poignant homage to designers who passed too soon, like the neon-graffiti-sequin-obsessed Sprouse, who succumbed to heart failure at age 50, as well as Patrick Kelly and Kaisik Wong, who both died of complications related to HIV.

Chen honors Kelly, who decamped to Paris and famously dressed Bette Davis in her last days, by having a mannequin draped in one of his signature button-and-bows-bedecked dresses lounge on a Jean Prouvé daybed. The San Francisco–based Wong — a nearly forgotten pioneer of wearable-art couture whose exotic one-of-a-kind costumes referencing ancient cultures and futuristic realms were favorites of Salvador Dalí­ — is represented in what is perhaps the showstopper of “Collision.”

“Kaisik made his work by hand and documented it with the multimedia artist Steve Arnold,” says Pickwell, who acquired Wong’s hand-painted lab coat for the show. “He was the subject matter and the design.”

To amplify the otherworldliness of Wong’s designs, Chen illuminated them with a free-form black-walnut hanging lamp by Michael Wilson. “Kaisik spent a lot of time out in nature,” she explains. “I wanted to build him a knoll, so I began filling a slatted wall with moss.” No good maximalist deed goes unpunished, though. “It was my nightmare,” Chen admits. “It took like four days, and I might’ve bought all the moss in Los Angeles.” 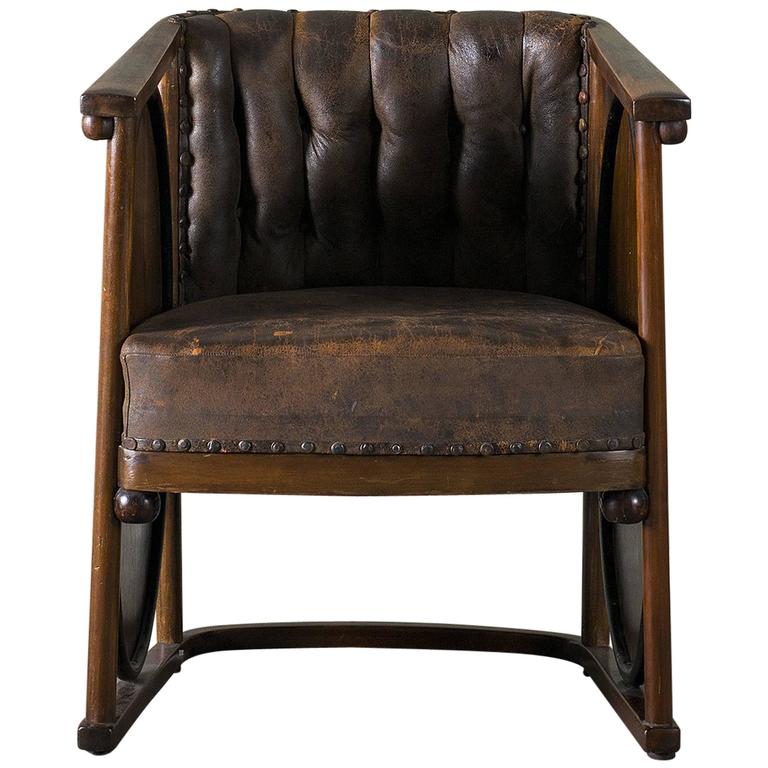 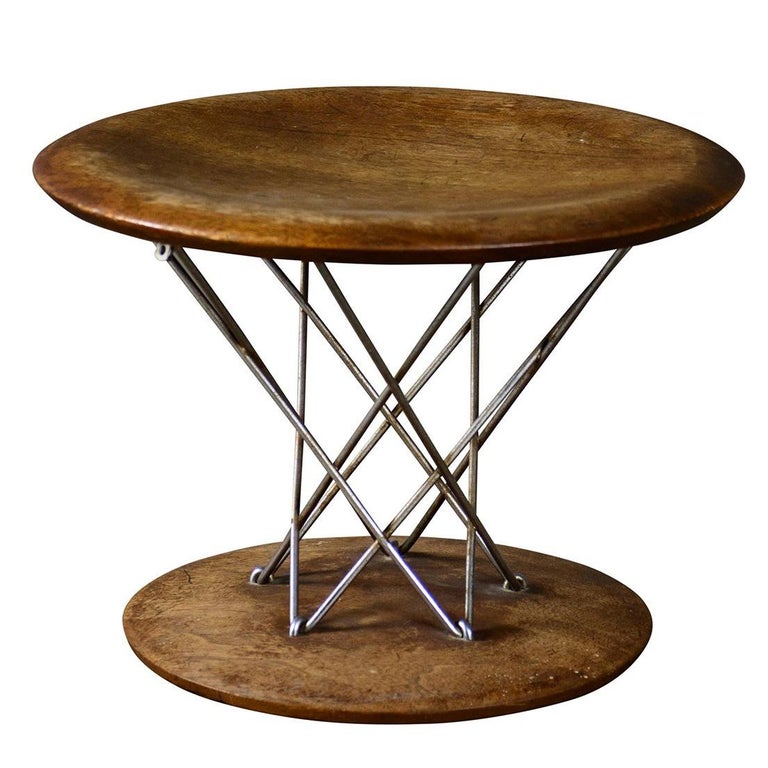