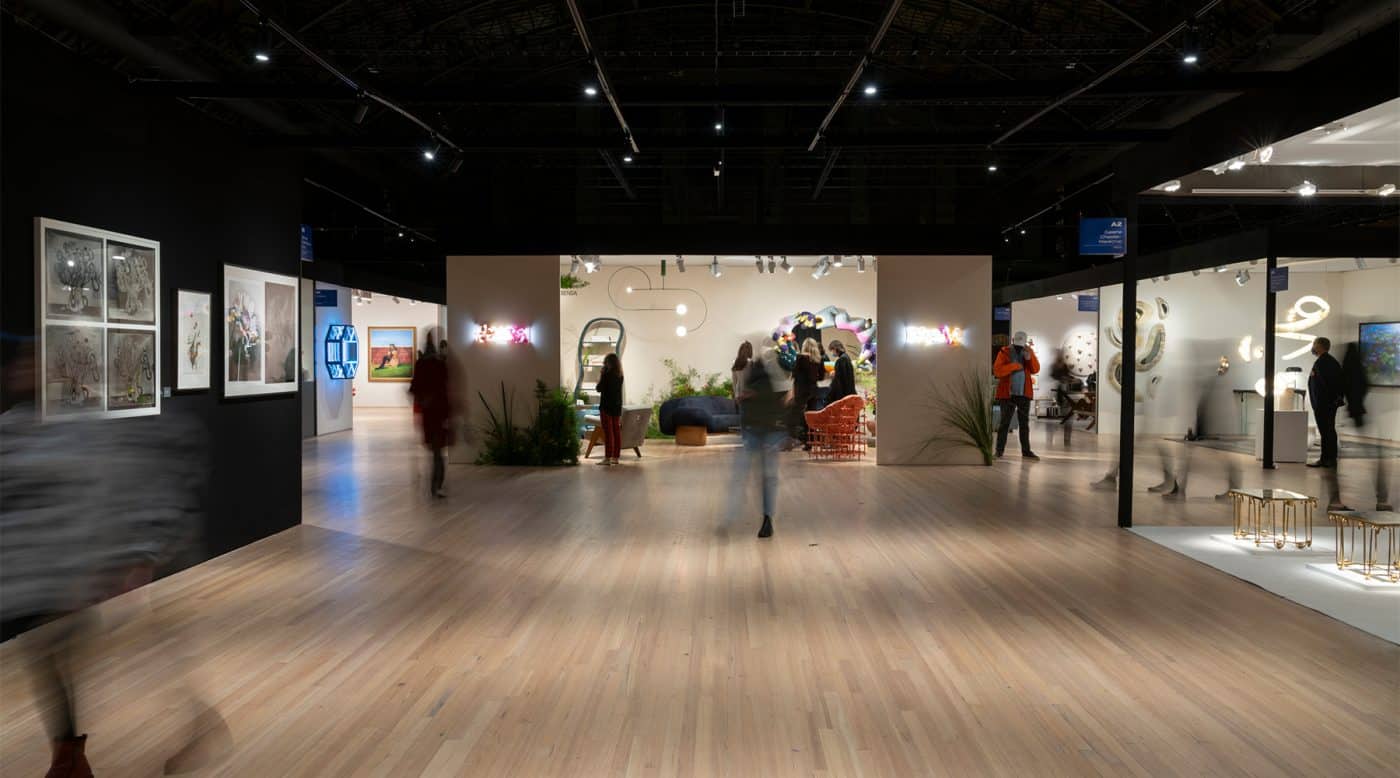 Once again, the fair arrives at New York’s Park Avenue Armory, filling it with covetable pieces offered by top galleries from across the city and around the world.

November 6, 2022“It’s one of those fairs that we always go back to because we love the people involved and the crowd that they bring,” Evan Snyderman, cofounder of the estimable furniture gallery R & Company, says about New York’s Salon Art + Design. “It’s one of the most popular fairs with the architecture and design communities. They always turn out.”

Still, why does R & Company go to the trouble of renting and outfitting a booth just four miles north of its permanent home, in Manhattan’s Tribeca neighborhood? “At Salon, we always reconnect with clients we don’t see in other places,” says Snyderman, “including New Yorkers who never come downtown.”

That’s music to the ears of Jill Bokor, the executive director of Salon, which runs through November 14 at the Park Avenue Armory, on the city’s Upper East Side, after opening with a November 10 preview to benefit the DIA Art Foundation.

“This is our first real post-pandemic year,” she notes. What would have been the ninth Salon Art + Design, in 2020, was canceled. In 2021, the fair opened with fewer dealers than usual, though Bokor says she’s amazed it happened at all. Now, eight of the exhibitors that stayed away last year are back, including three from New York and others from as far away as Stockholm and Shanghai. Bokor is expecting record sales for the exhibitors (28 of which are 1stDibs sellers). “We’re all spending more time at home than before the pandemic. And that means there are things in all our homes we’d like to fix.”

To Bokor, whose husband, Sanford Smith, founded the fair in 2012, it’s important that dealers display both art and design. That, after all is what distinguishes Salon from its competitors. (Design/Miami, because of its ties to Art Basel, can’t show anything that qualifies simply as art.) She also likes galleries to combine vintage pieces (roughly one-third of the items in the fair, she estimates) with newly produced work.

One Salon dealer who does it right is Cristina Grajales. Her booth will feature a travertine console by Aaron Poritz and cabinets by Christophe Côme, whose metal and agateware tile surfaces are the result of Côme’s experiments with the materials during the pandemic. Hanging on the walls will be silver sconces adorned with handblown-glass flowers, by Randy Polumbo, and works by the Iranian-British-American photographer Firooz Zahedi, who is married to nonpareil collector Beth Rudin DeWoody. Overhead will be a Trapeze chandelier by Paula Hayes along with a Loominair fixture by Betil Dagdelen, and underfoot a Victor Vasarely–inspired rug by the Colombian textile atelier Hechizoo.

Philadelphia’s Wexler Gallery has also mastered the design-art balance. Wexler will show oil-on-linen paintings by Valerie Campos alongside large sculptural works by Harry Morgan, who combines glassblowing and concrete casting to create pieces that look like neither glass nor concrete. The booth will include furniture by Ethiopian designer Jomo Tariku, as well. Tariku’s Nyala chair, made of black ash with inlaid brass, is named for a southern African antelope whose horns inspired the shape of the chair’s back.

Klove Studio, based in New Delhi, will present a collection of eye-catching Art Deco–inspired light fixtures made with precious metals and gemstones (including tourmaline, topaz, pearl, onyx and moonstone). The studio’s young makers, Prateek Jain and Gautam Seth, employed motifs that ancient Egyptians, Native Americans and members of the tribes of Northeast India would recognize.

Salon uses every part of the Armory, not just its giant Drill Hall, to present art and design. The show starts in the foyer’s reception area, which the Los Angeles gallery TWENTIETH will outfit with Thomas Newman Studio chairs made of sapele, an African hardwood, cerused to a warm gray finish and sculpted into shapes derived from nature (shades of Art Nouveau). “The point is for the pieces to set the tone as visitors enter the Armory,” says the gallery’s owner, Stefan Lawrence. Additionally, Twentieth will show a new sculptural floor lamp by Newman and his studio’s already iconic Pearl chandelier.

Also in the foyer will be interior designer and curator Amy Lau’s two-part mini-exhibition “Beauty of Brutalism.” A term most often associated with raw-concrete buildings, brutalist can also describe furniture, lighting and accessories with bare, unfinished surfaces, including glass as rough as sandpaper, crusty ceramics and distressed, patinated metal. Among Lau’s examples are a pair of lounge chairs designed by William Westenhaver for Witco in the 1960s. Though plush in the front — they’re upholstered in sky-blue velvet — they have backs of Pacific Northwest cedar shaped by a chainsaw.

Lau included, as well, a console with a facade of white-gold-leafed metal blocks by James Bearden, a former graphic designer with a welding shop in Iowa. Another selection is an astonishing light tower, by the Verona-based master Albano Poli, of metal-framed glass panes that project emerald, ruby, honey and amber light. (Poli, who is 87, is the first one to arrive at his studio every morning, at 8 a.m., his assistant says.)

In the collector’s lounge, London gallery Charles Burnand will show three pieces by Puerto Rican maker Reynold Rodriguez from his Before the Fantastic… collection: a chaise longue in white plaster; another chaise in hand-carved, hurricane-felled mahogany and almendro wood; and a chair in gypsum plaster.

The special exhibitions continue in the back of the Drill Hall with a furniture collection by Parisian interior designer Charles Zana. Being shown in New York for the first time, it includes his monumental patinated-bronze Calanque Two coffee table and his Franck Bridge chair, with a thin oak frame and thick suede-covered seat. Also in that section of the Drill Hall, Brooklyn-based Ottra will display a mirror eight feet in diameter on a ball-like wooden base and a new oak-framed sofa and loveseat by firm owners Sofia and Adam Zimmerman.

Towering over the Zana and Ottra furniture will be a colorful 22-foot-high outdoor sculpture — or architectural folly — presented by R & Company. Called Tower for an Hour, it is the work of Romanian-born designer Serban Ionescu. Ionescu’s more familiar pieces, which will populate the separate R & Company booth, are almost-functional tables and chairs made of wood or metal cut into the shapes of characters from Ionescu’s imagination. “He makes inanimate objects come to life,” says Snyderman.

Alongside Ionescu’s designs in the R & Company booth will be 3D-printed ceramic sculptures by Jolie Ngo, who recently graduated from Alfred University. “You can buy one of her pieces for a couple of thousand dollars,” says Snyderman, who adds, “It’s exciting to be launching a new generation of talents. It’s design’s next wave — and so a great time for people to come see what we’re doing.”

Bokor shares his enthusiasm. A hands-on chief executive, she likes to visit galleries before inviting them to join Salon. As happy as she is to encounter work by design greats, “I’m always most excited by new material,” she says.

When she signs up new exhibitors — there are eight this year — she shares a few pointers. First, she tells them to think of their booths as “immersive environments.” Visitors to Salon — architects, interior designers and, of course, collectors — are more likely to buy a piece, she explains, if they see how it looks in a room. For the same reason, she also advises dealers to avoid pedestals and anything else that shouts “display.” And she recommends keeping their booths uncluttered. She wants visitors to feel comfortable moseying around, unconstrained. Browsing, after all, can lead to buying.

She should know. Bokor herself sometimes buys, quietly, at her own fair. For years, she lived with craftsman furniture, almost all of it dark wood. But in recent years, while renovating a Manhattan townhouse, she says, “I’ve lightened up a bit.” When the house is finished, she plans to blend the wood furniture with newly acquired pieces by the likes of Ionescu and two British designers: Faye Toogood and Barnaby Barford. “When you mix your old stuff with contemporary stuff, it seems to work incredibly well,” she says. She could be speaking about Salon.