Damian Loeb’s Paintings Are Truly out of This World 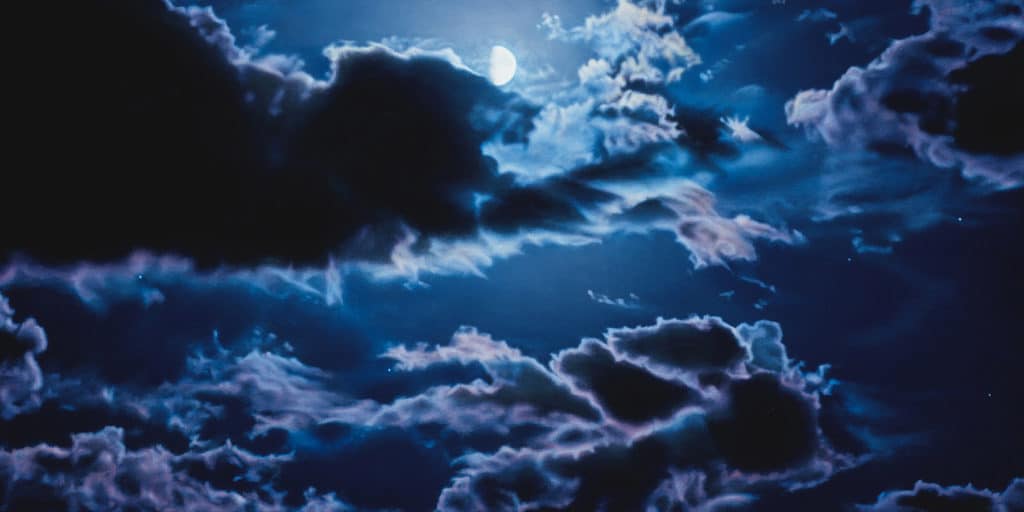 The New York artist has been studying astronomy and high-tech photography to produce works that reveal the wonders of space. 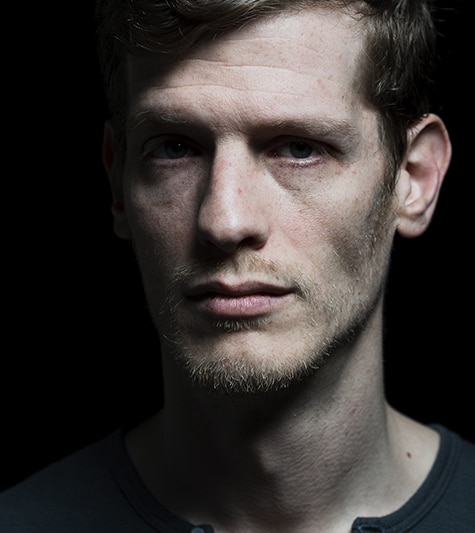 March 20, 2017Artist Damian Loeb’s new show at Acquavella Galleries features his astronomical “landscapes,” which are paintings based on his own photography as well as images from NASA. Top: Scorpius, 2016. Images of Loeb’s work courtesy of Acquavella Galleries and the artist

In Damian Loeb’s large-scale painting Penumbra, a dark, raking shadow encroaches across the radiant surface of a heavenly orb pushed up close to the picture plane. Rendered with cinematic clarity and tension, the topography at the north pole of the globe seems on the verge of plunging into darkness or annihilation.

The scene actually depicts the shadow of the earth passing in front of its moon, painted from a photograph Loeb shot from his rooftop in Tribeca with a handheld camera during a lunar eclipse. “When I got this picture, it terrified me,” says Loeb, who’s been a self-described “sci-fi nerd” since seeing the original Star Wars at age 7. In his photograph, a crater with sprawling white fingers looked to him like a metropolis that was about to get wiped out. “Having this huge Death Star shadow coming across the face of your planet means you’re screwed. I wanted to look at the moon and feel like it was something in another galaxy.”

Penumbra is one of a dozen new canvases dramatizing astronomical objects and events on view through April 6 in Loeb’s exhibition “Sgr A*” at Acquavella Galleries, in New York. These “landscapes,” as Loeb calls them, marry the 19th-century idea of the sublime — depicting nature as both beautiful and terrifying — with 21st-century technology that allows him to take a deep dive into the close observation of outer space. 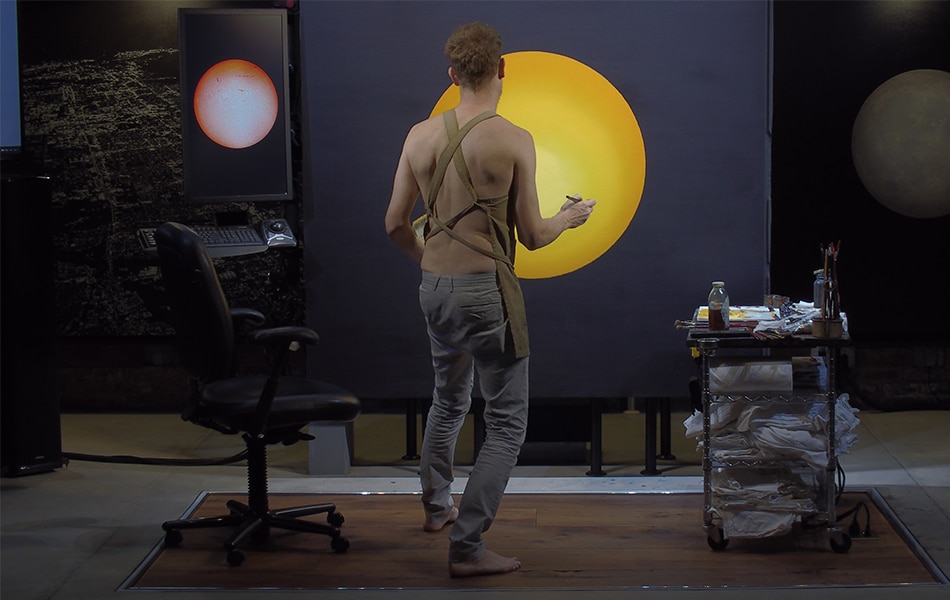 Loeb at work in his studio, which is located beneath his Tribeca home and includes large monitors with live feeds from a camera on the roof. 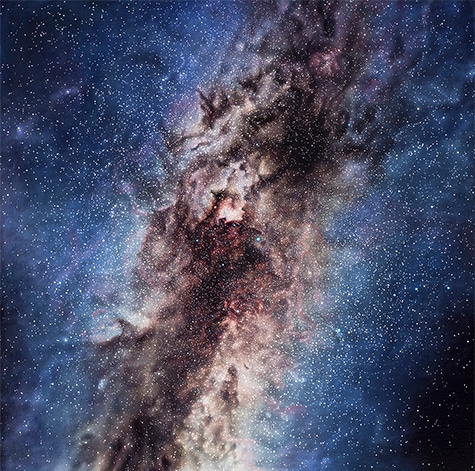 The 46-year-old artist works in a subterranean studio below his Tribeca home, which he shares with his wife — the subject of an earlier series of portraits — and their two young children. His windows on the world are several large monitors relaying live feeds, including one trained on the Empire State Building. With a remote control, Loeb flips through a series of preset vantage points of the neighborhood, surveillance-style. “It’s a big camera on the roof whipping around,” he says, admitting to an obsession with new media.

A wall of metal drawers is filled with the cameras and lenses with which he has shot a digital archive of more than 300,000 images. Many are of the sky viewed from New York or less light-polluted nights in the Dakotas or Maui. “I spend at least half my time on the computer,” says Loeb. Using an application that provides highly detailed NASA images correlated with specific dates, times and locations, Loeb was able to see that the four specks near his own shot of Jupiter were not static but in fact moons. “To me that’s just stunning that I would be able to capture four moons of Jupiter from my roof with a regular camera,” says the artist, who worked with Adobe Lightroom and Photoshop to layer his image with those from NASA to enhance resolution. He then superimposed another image of vaporous red clouds over his computer composite to complete the picture that he would later render in paint. He cites as influences the landscape paintings of J.M.W. Turner and Frederic Edwin Church, with their expressionistic skies. 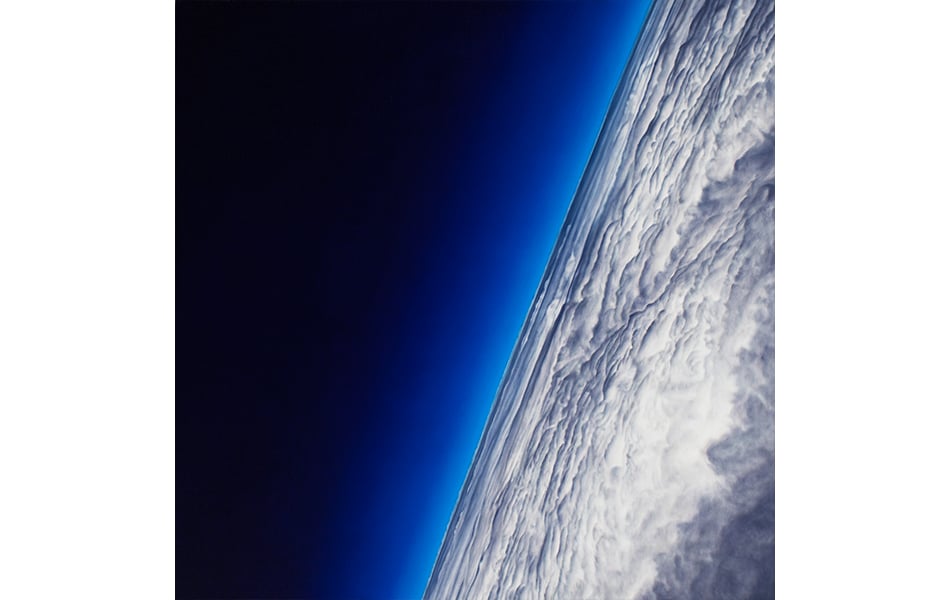 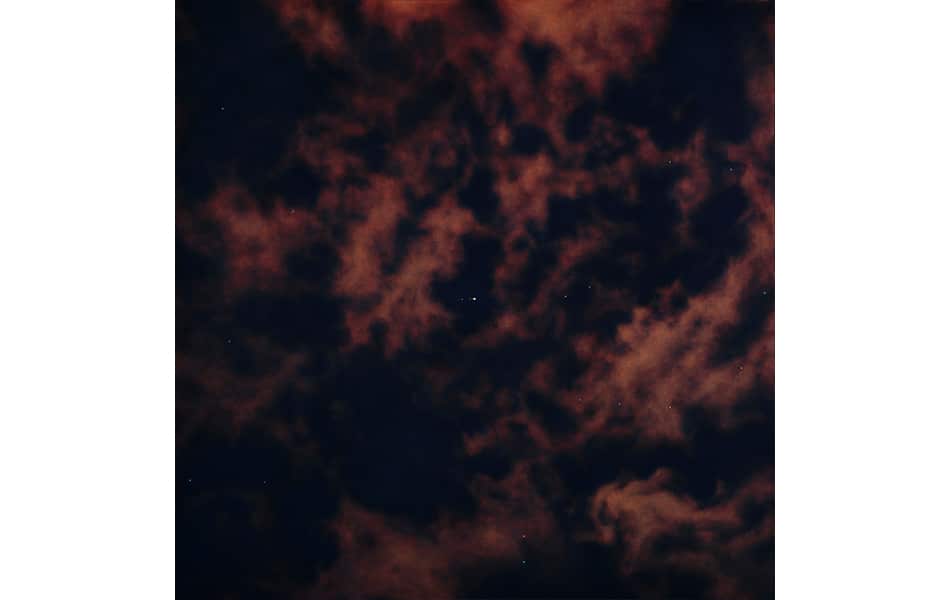 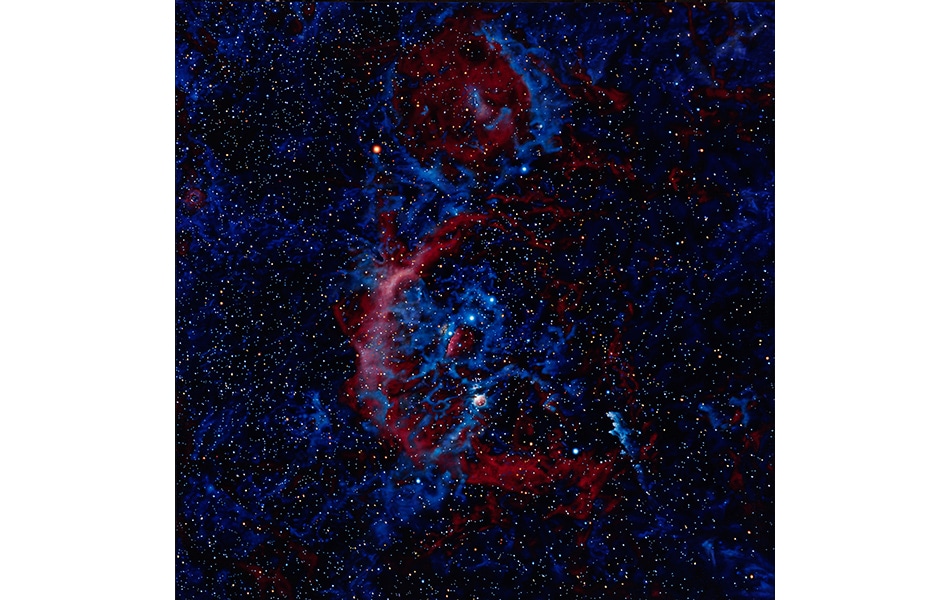 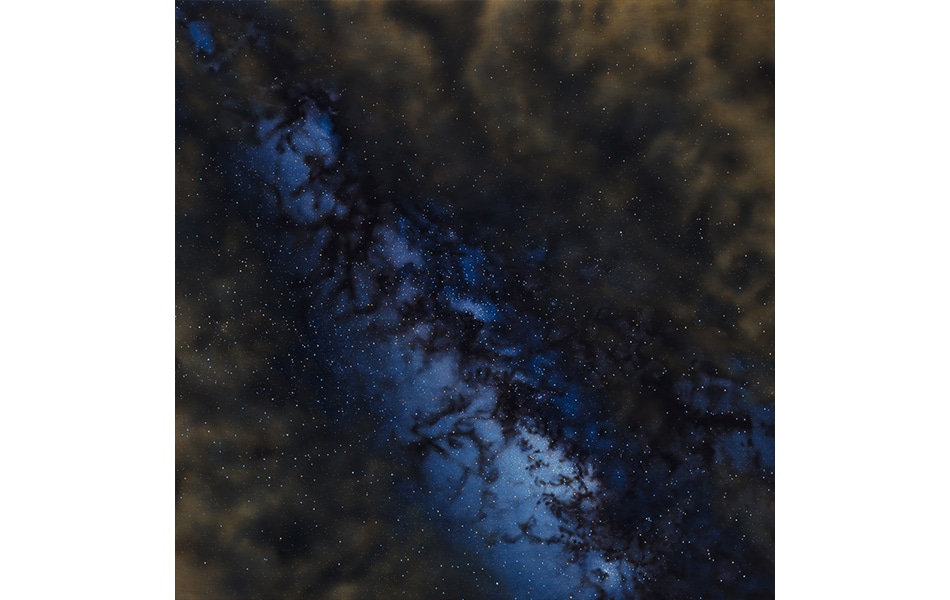 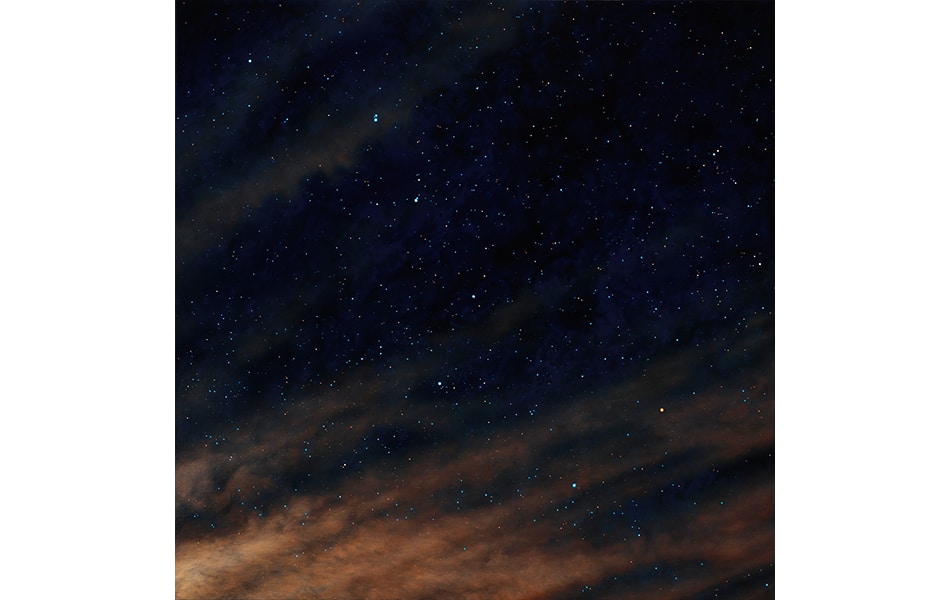 “I’m not a photorealist,” says Loeb, rebutting the label often applied to him by exposing just how much fabrication went into his piece Jupiter and 4 Moons. “It looks like a lonely little solar system. I’m just trying to be faithful to the way I felt about that moment when I looked at it.”

Over the past decade, Loeb has tunneled into learning about high-tech photography and hardcore astronomy to support his boyhood infatuation with space, just as he did when he taught himself how to paint. Growing up in Connecticut, he would take the train to New York on weekends and stare at Mary Boone Gallery on West Broadway, dreaming of what it would take to show there. He dropped out of high school at 17 and moved to the city the following year. Living illegally in a downtown office building where he had a studio, he began painting from collages of other people’s images, everything from erotica to National Geographic. At a coffee shop in 1997, he befriended then-emerging painter Cecily Brown, who had been discovered by Jeffrey Deitch, and she introduced Loeb to the dealer. Deitch connected him with Mary Boone, who gave him his first solo show in 1999. (He has been represented by Acquavella since 2008.) 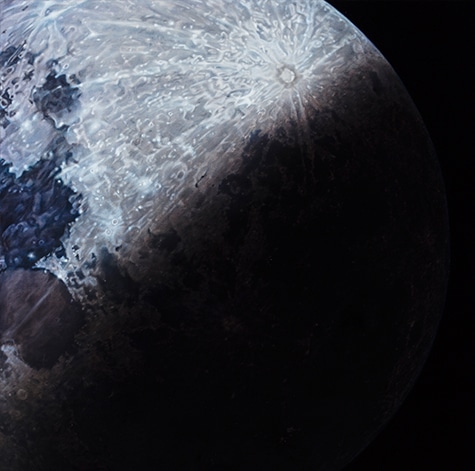 With success came trauma. Loeb faced multiple lawsuits over copyright issues. “I had what I wanted all my life, but I did not foresee this part of it,” says the artist, who lost a lot of money settling with photographers. He shifted to appropriating film stills (Hollywood didn’t sue) and began teaching himself photography. He painted very long canvases of suburban scenes imbued with sexual or violent foreshadowing. “I studied how cinematographers make you look where they want you to,” says Loeb, noting that simple compositional changes like tilting something can make the viewer feel unsettled.

He now applies his finely tuned narrative sensibilities to the heavens, which he welcomes as a form of “utter escapism.” His painting Cygnus is based on his photo of the North America Nebula, in the constellation Cygnus. Its shape reminded him of the creepy hawk statue found in the desert at the beginning of The Exorcist. On the computer, he runs through all the versions of his digital composite — showing his original photo of a starry night sky and then how he brought out the menacing bruise-colored diagonal structure within the stars, pushed their whites in contrast to the midnight-blue background and created an abstracted composition that could read simultaneously as something under a microscope and cosmically vast.

Loeb took pains to project those stars onto the canvas and paint each one the right size and in the right position before further embellishing his color and atmospheric effects. “Those are like the pin points,” he says, “that I can hang my version of the story on.”