A French Designer With An Artisanal Touch 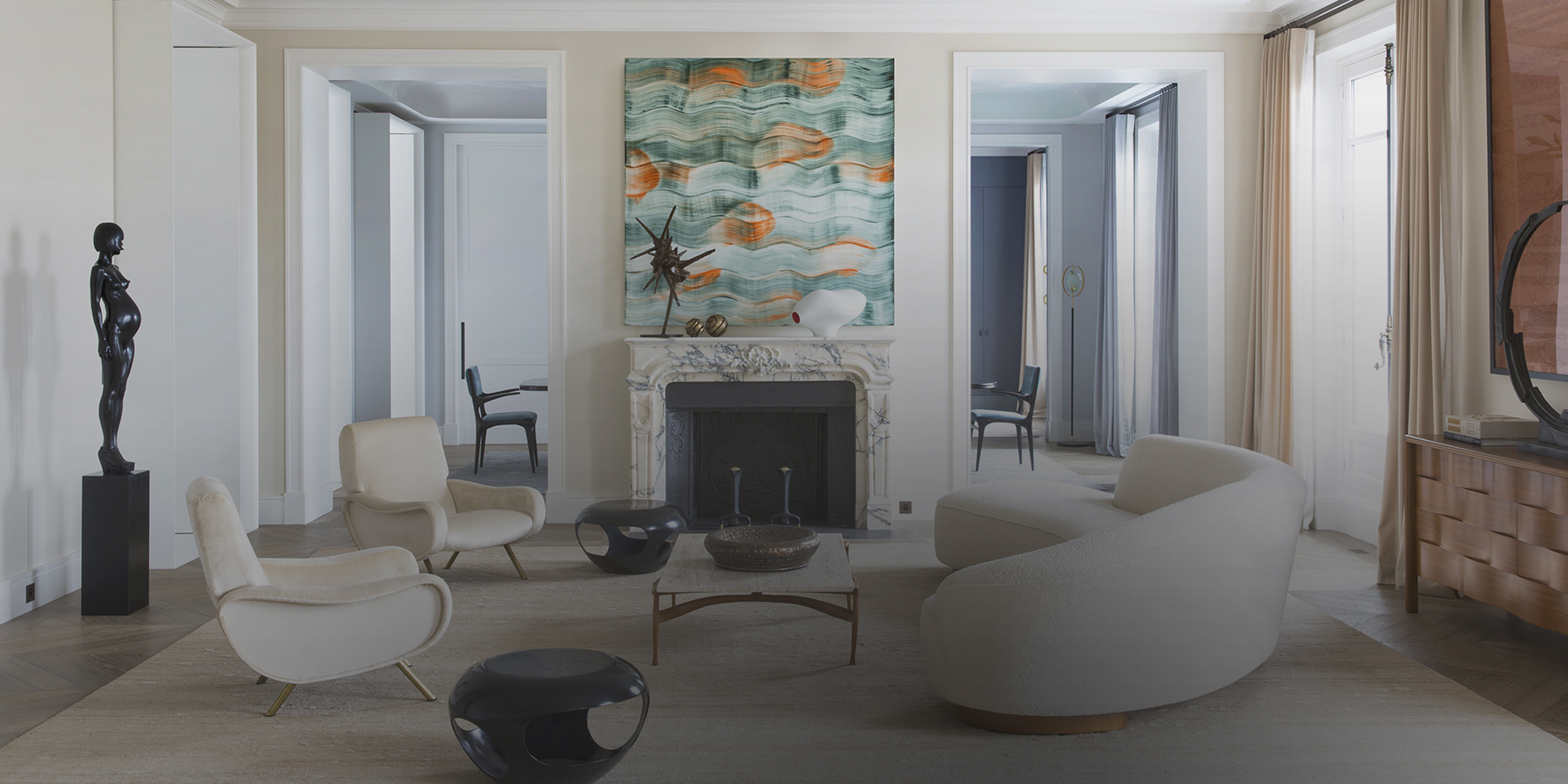 Damien Langlois-Meurinne has created a constellation of projects — ranging from chandeliers inspired by the stars in a clear night's sky to soothing and stylish interiors for homes and boutiques. These have earned him a rising reputation as a man on the move. AD France has taken notice, and now Americans are, too. 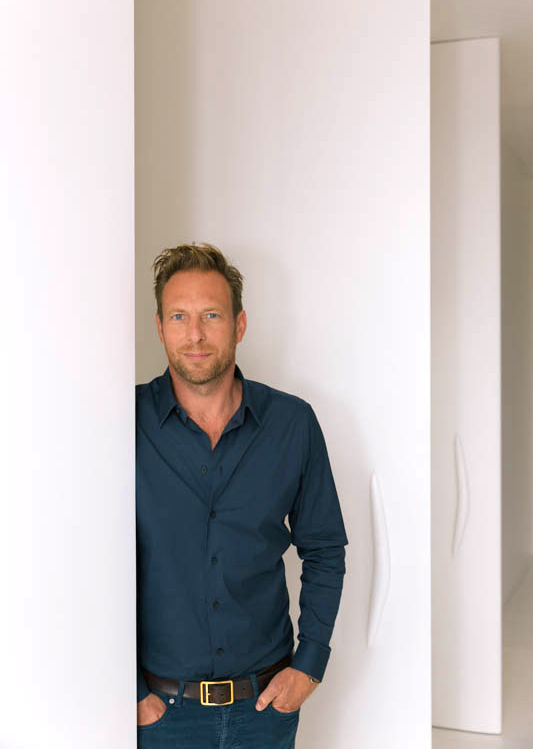 November 2, 2015A designer of both furnishings and interiors, Frenchman Damien Langlois-Meurinne (above) often incorporates his own pieces into the spaces he creates, as in the living room (top) of a 4,300-square-foot apartment on Boulevard Saint-Germain in Paris, where his items mix with those of 1960s vintage. All photos by Stephan Julliard/Tripod Agency unless noted

One of French designer Damien Langlois-Meurinne’s best-selling creations is a chandelier called Branch, from his Last Night lighting collection. It consists of an angular arrangement of lacquered metal branches and shorter stems at the ends of which are spherical shapes housing light bulbs. The inspiration for its form, he says, was a clear summer night sky. “I wanted to develop the idea of having a multitude of scattered points of luminous dots just like stars,” he explains. In many ways, it is a throwback to his childhood holidays in Greece’s Cycladic islands. “We’d visit little unknown islands like Kimolos, where tourism was still in its infancy,” he recalls. “We’d go to deserted coves and sleep under the stars on the beach. It was quite extraordinary.”

Today, the 43-year-old presents his furniture in his showroom-cum-office in the trendy northern part of Paris’s Marais. Fans of his work include interior designer Muriel Brandolini, former Lanvin creative director Alber Elbaz and French racecar driver Alain Prost. He is sought-after as an interior designer, too. To date, his projects have comprised a house in Saint-Tropez, a flat in Megève and a series of boutiques and day spas in several Chinese cities for Biologique Recherche. This September he was one of the participants in the latest AD Intérieurs showhouse, organized by the French edition of Architectural Digest, for which he created an ultra-sophisticated circular boudoir filled largely with his own custom creations, such as a pair of sleek banquettes and a series of golden rock-like coffee tables.

A 4,300-square-foot apartment on Paris’s Boulevard Saint-Germain counts as his most stunning commission to date. It features a dazzling all-white entry hall, while its master bedroom is enveloped with undulating walls clad in spruce-wood veneer. “They look rather like curtains,” he says, “which brings a real softness and sensuality to the space.” 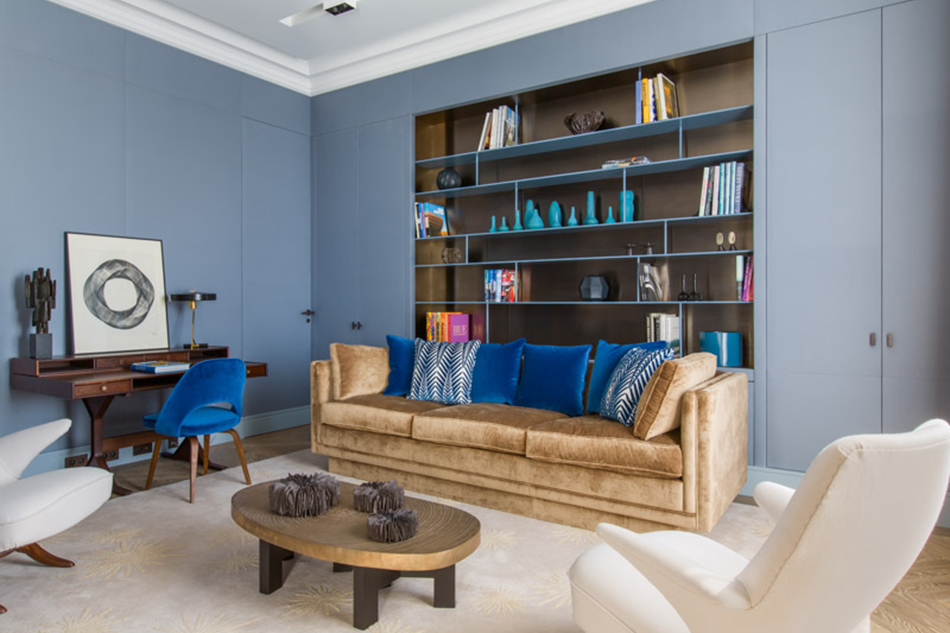 In a guest room of the Boulevard Saint-Germain apartment, the designer’s penchant for introducing rounded, curvaceous forms into rooms otherwise notable for their rational and rectilinear architecture is very much on display. 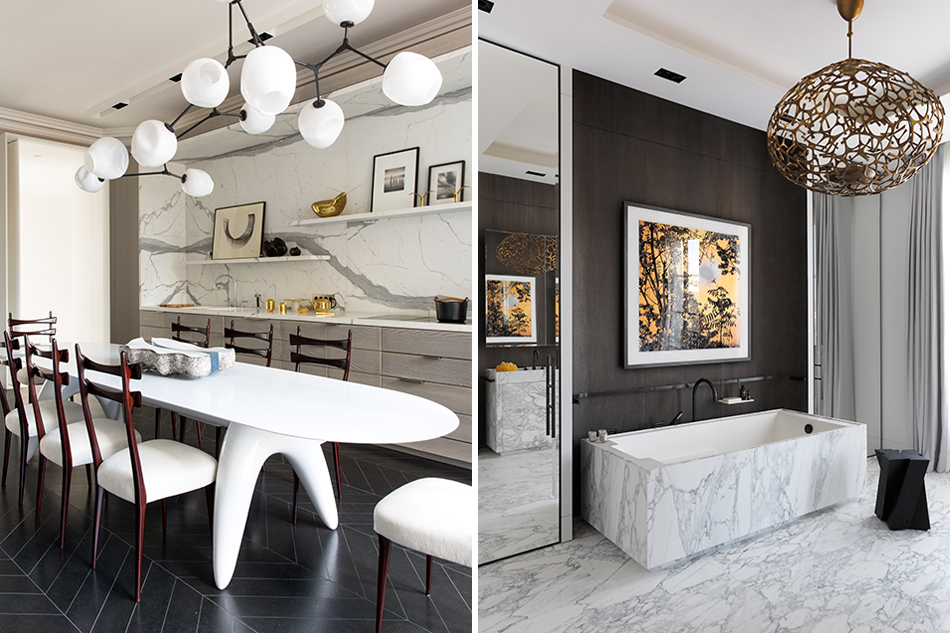 Left: A chandelier by Lindsey Adelman hangs over a table of Langlois-Meurinne’s own design in the Boulevard Saint-Germain kitchen; the surrounding chairs are vintage Italian. Right: The apartment’s master bathroom has another dramatic light fixture above a bathtub and floor of white-gray-grained marble. 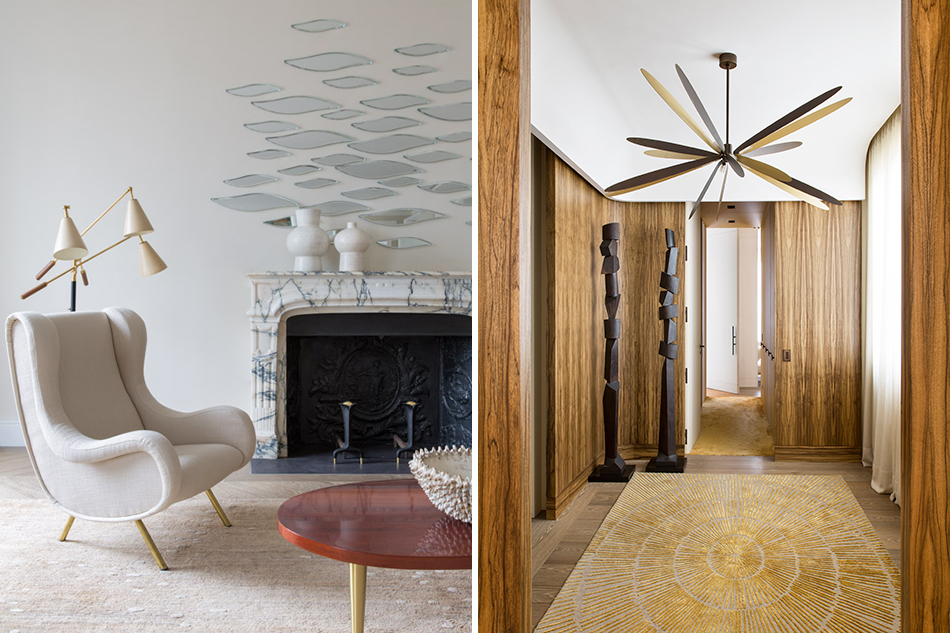 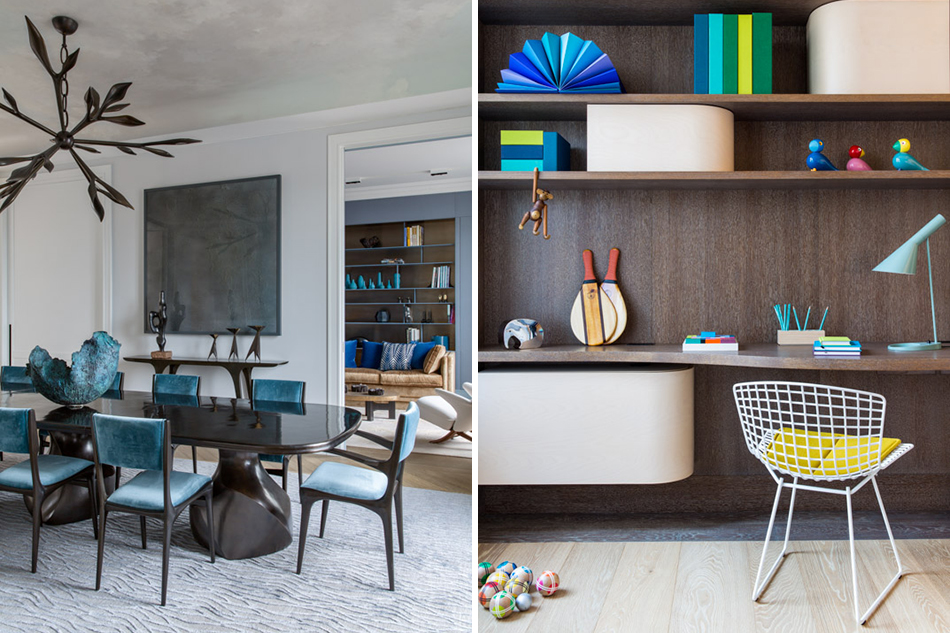 In both the dining room and a children’s room, pops of color break the largely neutral hues of the Paris home. 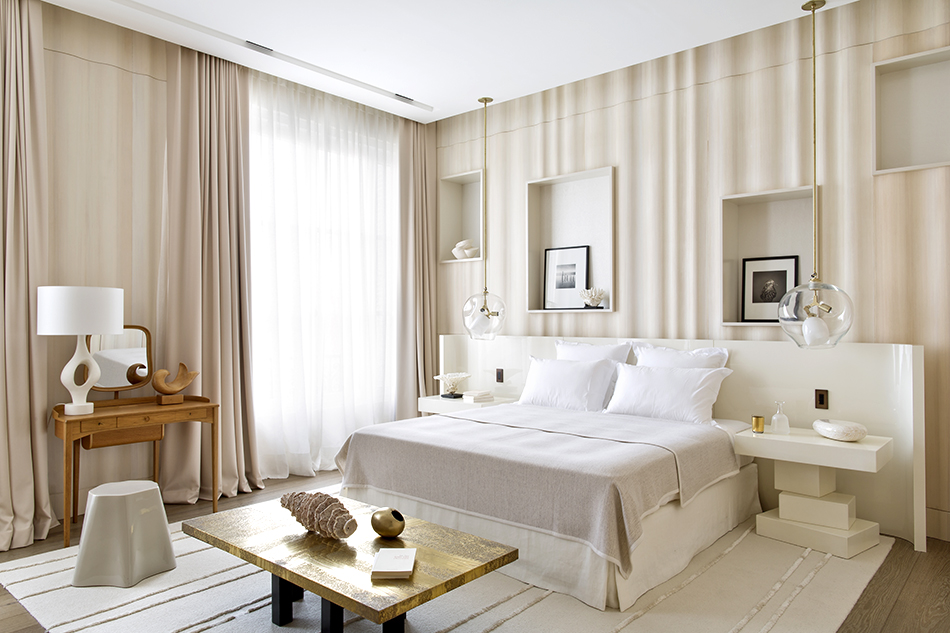 Undulating spruce-wood veneer covers the walls of the master bedroom in the apartment. “They look rather like curtains,” the designer says, “which brings a real softness and sensuality to the space.” 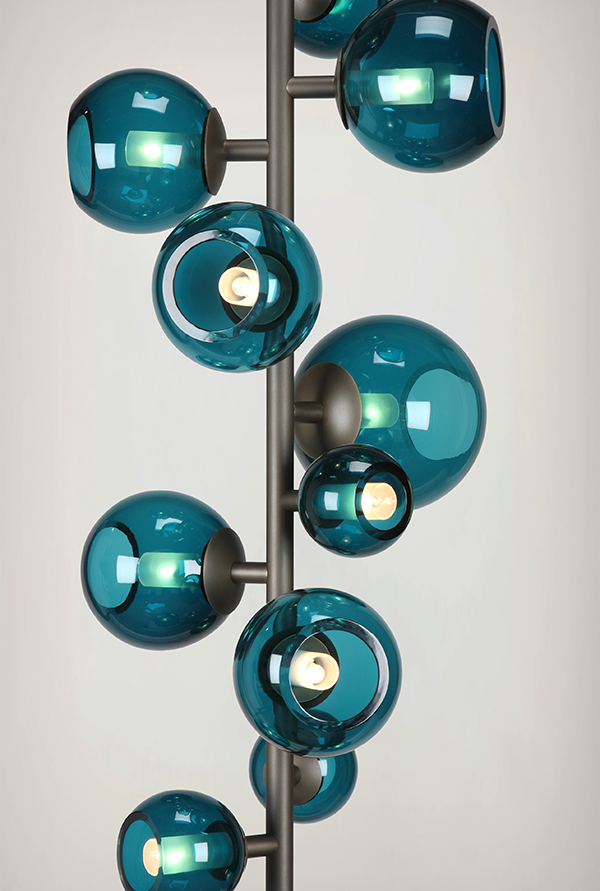 Langlois-Meurinne’s passion for his profession was triggered at an early age. His family owns a property dating from 1700 surrounded by 2,500 acres of woodland in France’s Dordogne region, where he would construct intricate tree houses with his father. “We’d go to a yard to cut the wood,” he remembers, “and create structures that would last ten years with doors that would lock, where you could sleep.” When he was 17, a friend showed him a book on the work of Philippe Starck and he was immediately hooked. “I could see how from a drawing you would make an object that was not only functional, but also had a poetic quality to it,” he says. “I said to myself, ‘That’s the direction I want to take in life.’ ”

After graduating from the distinguished École Camondo, in Paris, he worked for three years on interiors projects in the office of Christian Liaigre, setting up his own firm, Agence DL-M, in 2003. One of his early clients was the German fabric company Zimmer + Rohde, which asked him to design a line of furniture for them. Other collections followed for both Sé London and Pouenat. “His work is very ethereal, pared-down, elegant and beautifully proportioned,” says Pouenat CEO Jacques Rayet. “His products are visually striking, but never overwhelming.”

A large number of them are named after the titles of songs. There is the Close To Me console for the classic by the Cure, the Past in Present dining chair for the Feist single and the See Me Now mirror for the Kanye West hit. The latter looks like a kind of gigantic silver squiggle. “It reminds me of a car’s frozen windshield that you scrape with your finger to try to see through,” notes Langlois-Meurinne, who likes to dream up looking glasses. “Apart from their reflective surfaces, these are objects with few constraints,” he declares. “So they offer a great possibility for expression.”

“His work is ethereal, pared-down, elegant and beautifully proportioned.” 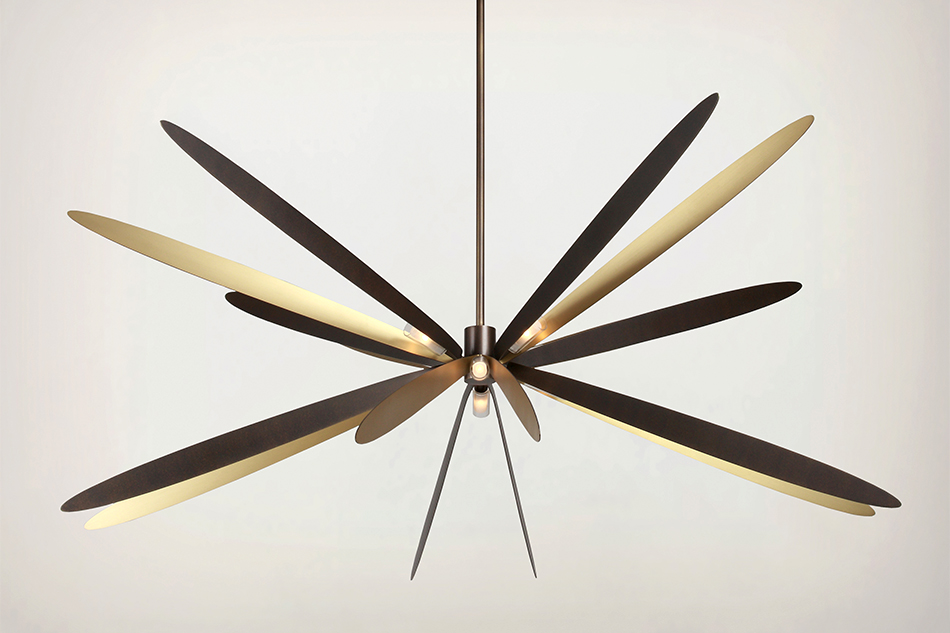 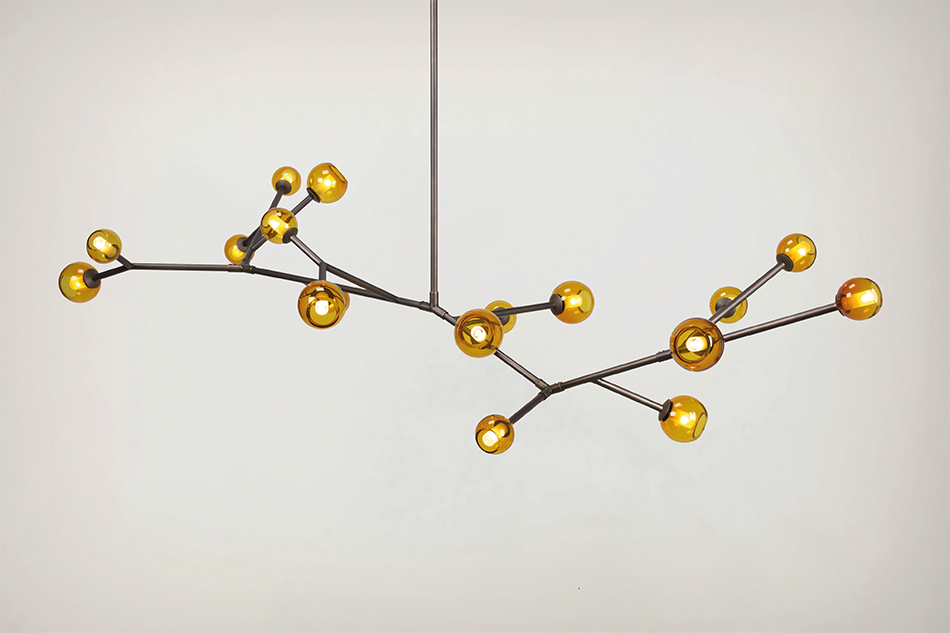 The designer dreamed up the Last Night collection’s Branch chandelier as a stylized homage to the stars of the clear night skies he remembers seeing over the Greek islands where his family vacationed when he was a boy. Photo courtesy of Agence DL-M 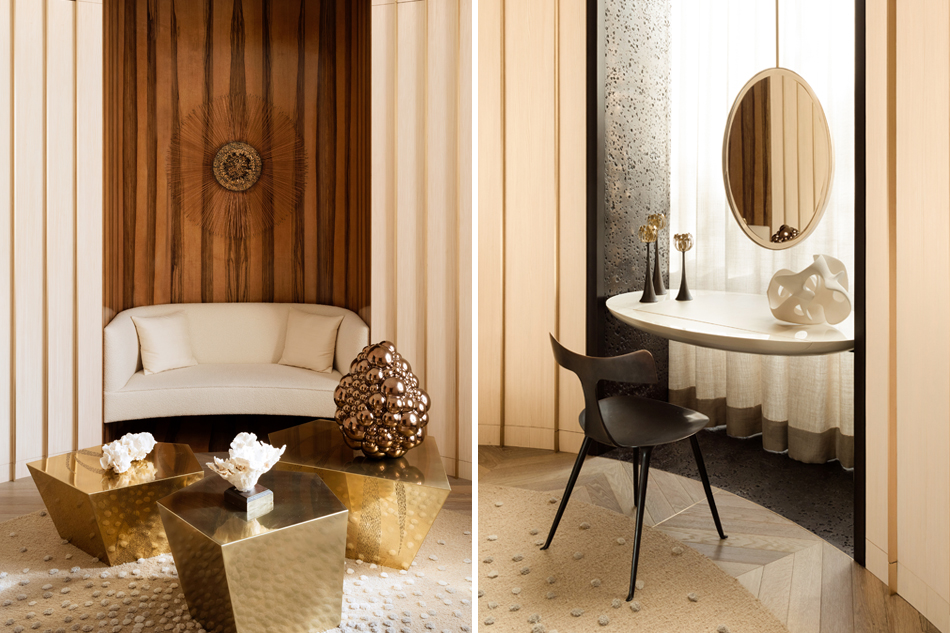 Langlois-Meurinne designed a circular boudoir for French Architectural Digest’s annual AD Intérieurs show house this September, filling it for the most part with his own custom pieces. Photos courtesy of Agence DL-M 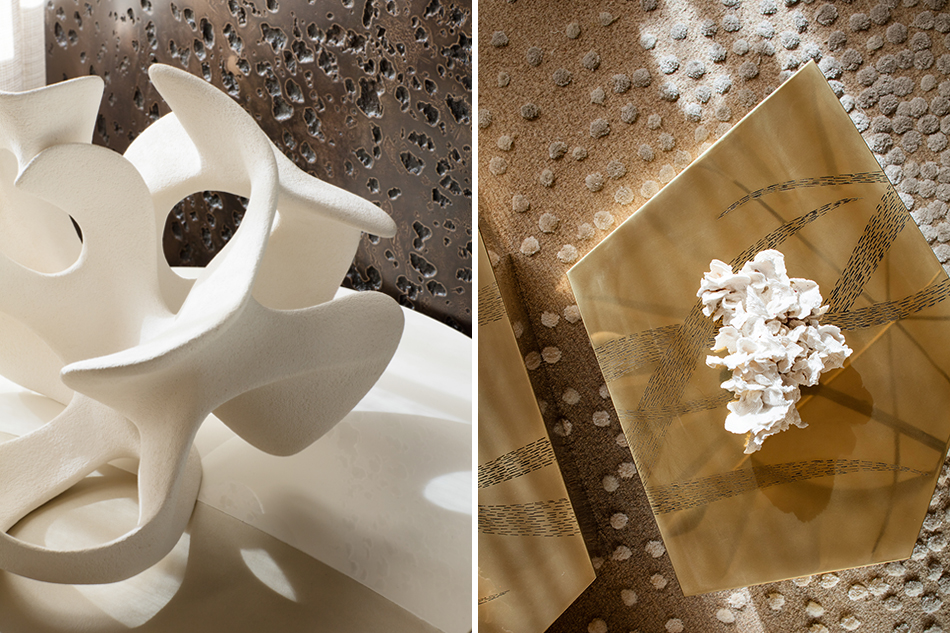 Left: The designer dedicated the boudoir to curves, softness and timeless femininity, as in this sculpture atop the dressing table. Right: One exception to the curvilinear theme is the room’s faceted, sharply shaped gold-hued coffee tables. Photos courtesy of Agence DL-M 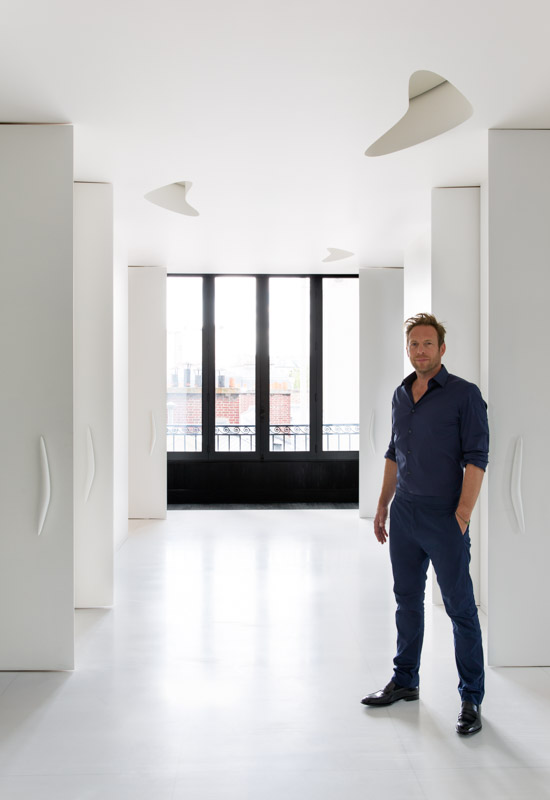 “For me, the real goal is to find a subtle balance between simplicity and a healthy dose of sophistication,” says the designer, seen here in the all-white entry hall of the Saint-German apartment.

Another constant in his work is the influence of nature. “It’s the starting point for everything I do,” he asserts. “I think it’s impossible to come up with an extraterrestrial form.” The interiors he creates are often populated with papier-mâché animal sculptures or framed insects and butterflies. Even his favorite vintage design — the quirkily sculptural Penguin lounge chair by Danish designer Theo Ruth — bears the name of an animal. “It’s expressive, endearing and elegant,” he says of the 1957 classic.

His approach to interior design is also largely based on the juxtaposition of contrasts. While the actual architecture of his rooms is often very rational and rectilinear, the furniture he places in them largely incorporates more rounded, curvaceous forms. He is a fan of niches and alcoves (“They help to create intimacy”), postwar Italian and Scandinavian design and the color blue. “I have a very strong attachment to the sea and the Mediterranean,” say the designer an avid kitesurfer who regularly travels to such exotic spots as Cape Verde, off the northwest coast of Africa, to practice the sport. Probably most important of all for him, however, is the possibility to work with fine craftsmen: “For me, the intervention of the artisan’s hand is decisive. It undeniably gives an object a soul.”

The desire to endow his spaces with a sense of spirit no doubt also explains his rejection of what is probably modernism’s most famous dogma — Ludwig Mies van der Rohe’s legendary “Less is More.” “I’m not certain that people want such purity nowadays,” he says. “We’re not ascetics and no longer aspire to live in completely bare interiors. For me,” he concludes, “the real goal is to find a subtle balance between simplicity and a healthy dose of sophistication.” 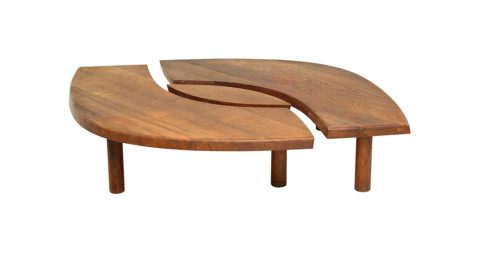 I like the fluidity evoked by this table, the softness of the line of its curve. 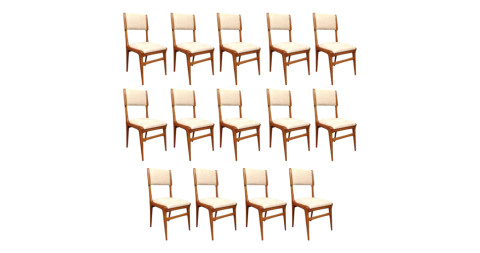 These chairs are full of grace and elegance; they combine strength and finesse. 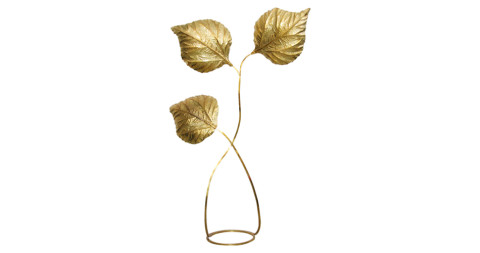 I respond to this mostly for its sculptural, poetic and elegant aspect. I like the rods’ curves: They reply to each other, bringing freshness into a room. 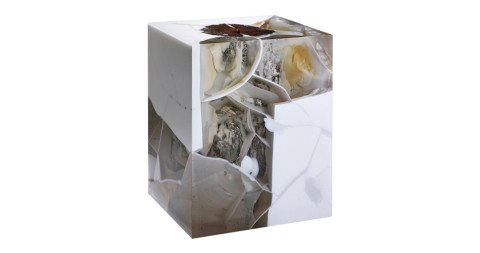 The material is incredible, and the piece is out of time: On one hand, it’s extremely contemporary; on the other hand, archaic. 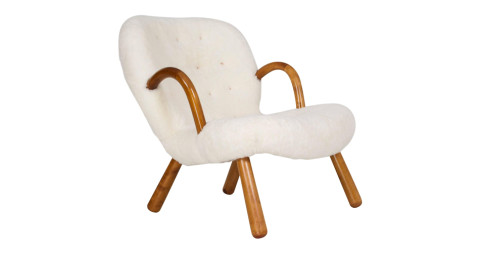 This chair is alive. It is not necessarily gracious, but it has plenty of character; it seems animated, welcoming and soft. 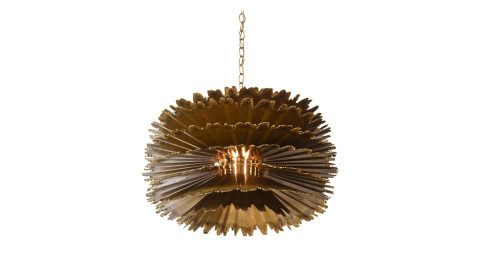 I like to use some Brutalist pieces in my interiors to insert a certain dynamic into the space. Turned on and inhabited by light, this lamp softens. In addition, the light radiation associated with metal makes for a very lively feeling.