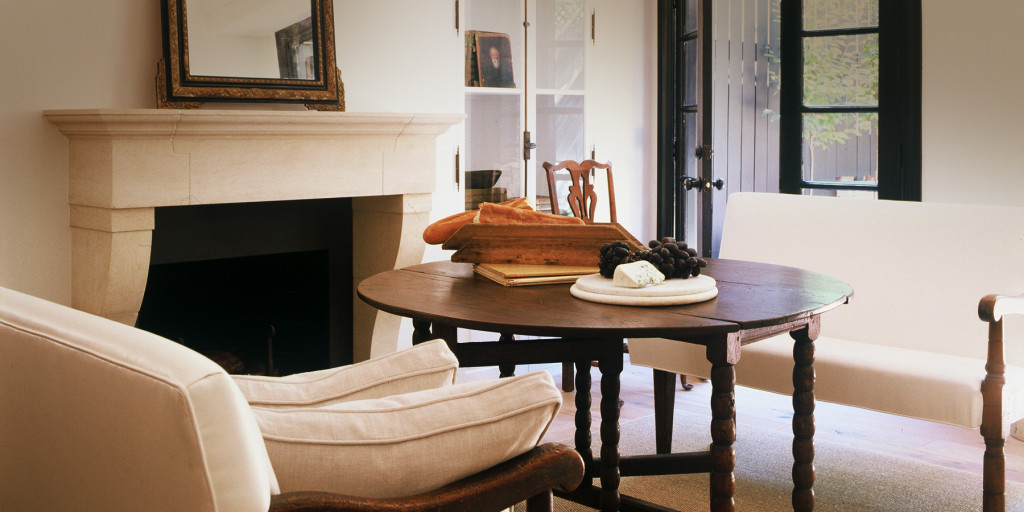 Based almost solely on the strength of the aesthetic of a single project — his own home — the designer has built a thriving interiors business reinterpreting the past for some of today's most powerful politicos and society grandees. 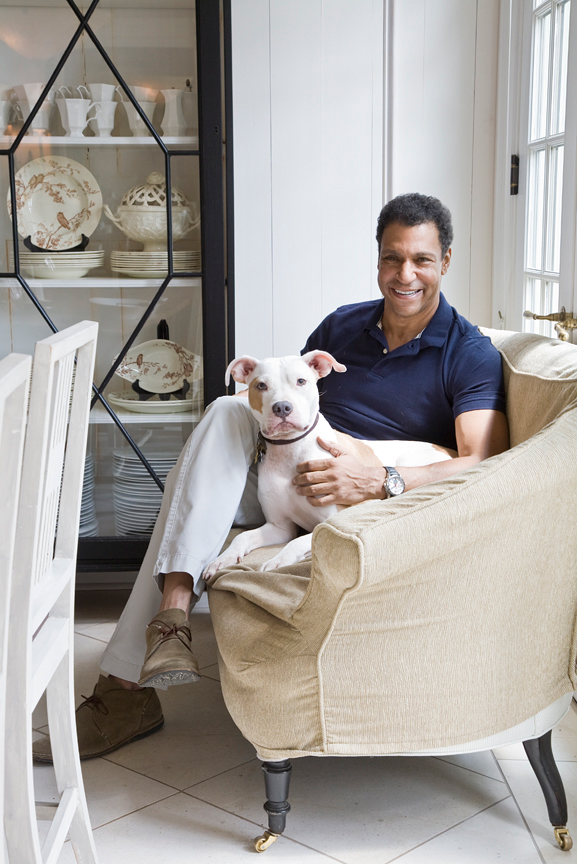 September 30, 2009Washington, D.C.–based designer Daryll Carter rose to prominence in the late 1990s, after the magazine Metropolitan Home put his dining room on its cover and proclaimed him as “The New Traditionalist.” Top: Carter’s aesthetic — sculptural silhouettes, architectural details, a curatorial approach — was a welcome break from the mid-century modern rage at the time. All photos by Gordon Beall

To understand the success of Washington, D.C.–based designer Darryl Carter, one has to recall what was happening in design at the turn of the millennium, when he sprang fully formed into the world of interiors, like Athena from the head of Zeus.

For years, shelter magazines had been plying us with austere, beige-greige rooms and mid-century modern furniture, and frankly, the look had evolved from merely monochromatic to monotonous. Even Metropolitan Home magazine, one of the earliest and most messianic proponents of this aesthetic, was casting about for alternatives to what had become a formulaic fad, much like the Doc Martens, preppie Hilfiger clothes and hip-hop hoodies of the day.

It was in the spring of 1997 that Met Home, now sadly defunct, knocked on Carter’s door at the Altamont, a venerable 1920s Beaux Arts building in D.C.’s Kalorama neighborhood, where he had reunited four separate apartments to return the residence to its original footprint. There, the editors found their new statement: graciously proportioned rooms with lots of architectural detail; tall, stately Parisian-style windows; wood floors stained white and overlaid with casual sisal; and a spare assortment of antique furnishings, many warmly weathered and worn, that had been assembled with a curator’s rigorous eye. When the November/December issue of the magazine hit newsstands, it was Carter’s Altamont dining room readers found on the cover, accompanied by the legend “The New Traditional.”

Some months later, the apartment experienced another wave of publicity. It was featured in Jan Cigliano’s book Private Washington, a glossy peek into the capital’s most exclusive residences. Suddenly Carter found himself fielding phone calls from the district’s powerful politicos and café society. No one was more surprised than Carter himself. His first major client, the owner of a highly respected public relations firm, marveled at the inverse pyramid of Carter’s rise to stardom, noting that most people build a portfolio and a business so they can acquire visibility and publicity — but he’d done just the opposite. 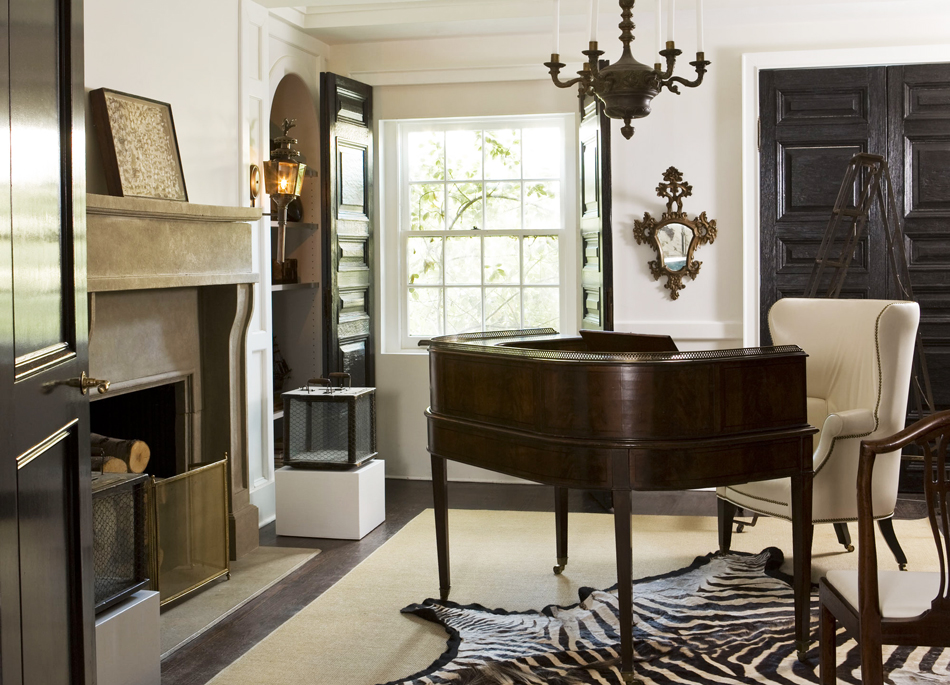 In the study of Carter’s current home — a townhouse on D.C.’s Embassy Row — an antique desk keeps company with an upholstered wing chair of his own design. 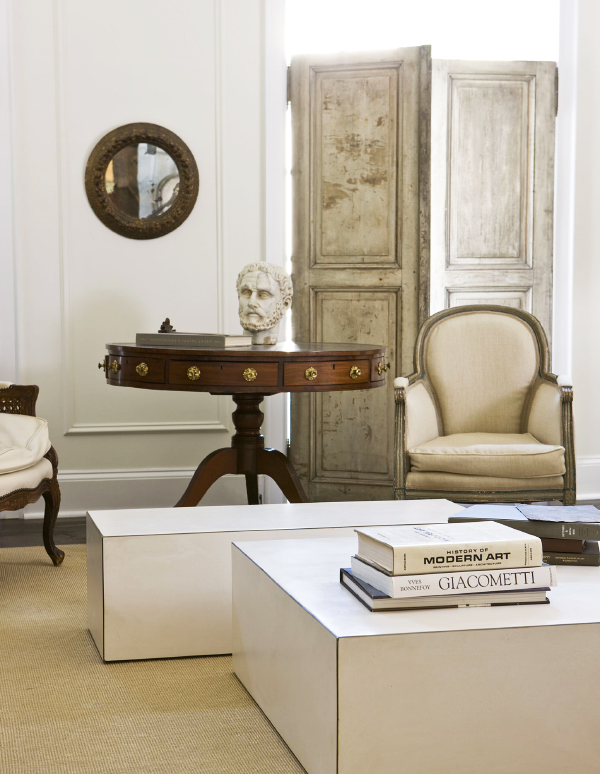 Carter’s juxtapositions of style and period are both sculptural and conversational. Here, reclaimed Belgian farmhouse shutters and antique art and furnishings are in dialogue with gypsum-cement tables designed by Carter.

“I had no portfolio but the book and the magazine,” he says, seemingly still a little dazed. “My client said to me, ‘You have visibility but no business!’ ” Thankfully, this client cast a generous eye on his inexperience. “It wasn’t like they hadn’t worked with an interior designer before,” he remembers. “They were very forgiving.”

Carter has come a long way since 1997. In addition to his interior design work, he has created two collections of furniture — one for Neiman Marcus, the other for Thomasville. His line of door hardware for Nanz is forthcoming, a licensed bedding line is also under development, and Carter is one of several top designers selected by Benjamin Moore Paints to endorse a palette from their thousands of colors. (For a while, his visage was ubiquitous in paint ads on the sides of New York City buses.) He says array of hues is “a nuance-driven collection that suggests shadow and discreetly articulates architecture.”

Carter also consistently appears on prominent who’s-who lists such as the Washington Post Magazine’s “Top Designers in Town” and, most recently, Elle Decor’s “A-List: 30 Designers We Love” (June 2010 issue). Aside from these publications (and Metropolitan Home, of course), his work has been featured in House Beautiful, O at Home, Traditional Home, Southern Accents and Town & Country.

Anyone who knew Carter before the fortuitous events of 1997 could have been forgiven for not seeing it coming. Little in his background predicted this professional destiny. He was raised in a Bethesda, Maryland, home he calls “very Brady Bunch” (1950s pitched roof, shag carpeting and “more color than I was comfortable with”) by a businessman father and a psychotherapist mother. And although he pored over design magazines from the age of eight, dreamed of becoming another Albert Hadley and was actually accepted to the Rhode Island School of Design, he says, “My father thought it better I pursue a liberal-arts education.”

At the turn of the millennium, Carter sprang fully formed into the world of interiors, like Athena from the head of Zeus. 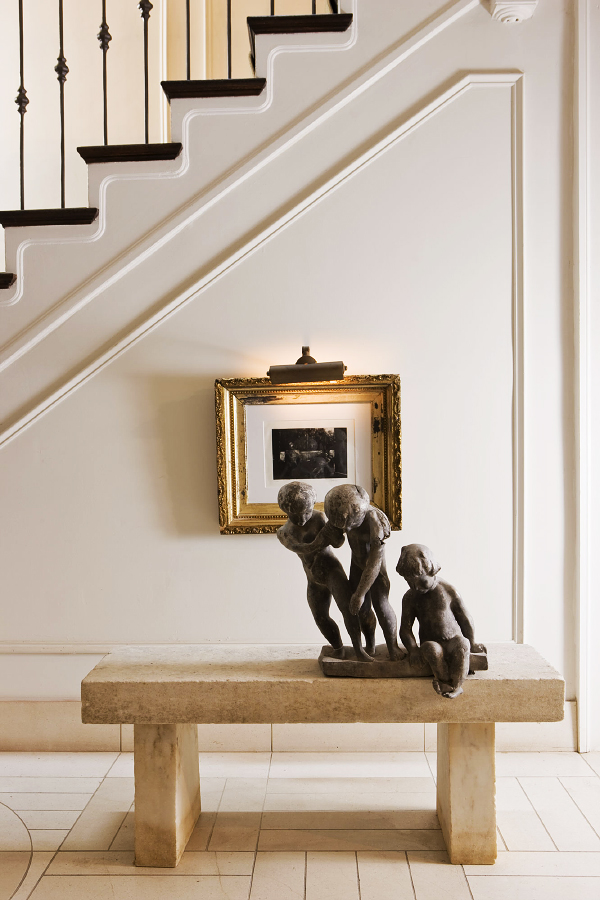 Near a staircase in his townhouse, Carter created a fine art tableau.

Carter complied. Following undergraduate studies with law school at Georgetown University, he joined his father’s firm as legal counsel. His creative restlessness, however, surfaced irrepressibly every couple years, manifesting itself in regular, major renovations of successive homes. Anyone looking closely would have concluded that law was not the career path Carter would follow for long.

His forays “off road,” so to speak, started with a tiny Capitol Hill row house featuring exposed brick walls that “I instantly turned white,” he recalls. “Sisal rugs went down, and in came low-key furniture and large modern canvases. That formula has remained, but it ‘steroided’ over the years.” Then there was a Dupont Circle apartment where he went through “my Berber-carpet phase, and the furniture became more modern: marble, glass, chrome.”

Next he moved into the Altamont, and when he received “the proverbial offer I couldn’t refuse” for that place, he bought the old chancery of Oman on Embassy Row, where he lives now. Carter calls this townhouse a “laboratory,” where he continually experiments with and refines his aesthetic. But because it is, at this point, such a perfectly tuned environment — and because the medical profession has apparently not found a cure for his obsessive desire to renovate — Carter also escapes these days to a 19th-century farmhouse in the bucolic horse country of Virginia.

“It’s always been about spare,” he says by way of explaining the evolution of his style. “But now it’s about the gravity of the pieces I place in my own homes. It’s about curating things I love that you wouldn’t necessarily think go together.”

In the townhouse, for example, a concrete dining table of his own design and a Murano glass chandelier suspended over it are, seemingly, “two things that should never cohabitate.” But, somehow, Carter makes the pairing work.

The curator metaphor is not misplaced. His juxtapositions of style and period are both sculptural and conversational. Carter’s fondness for white rooms heightens silhouettes of the furniture placed within them, so that they exude an unmistakable sculptural presence. And often, he observes, “it’s the dialogue between the pieces” — the way one curve echoes another or how a peeling, flaky texture is contrasted by a smooth one — that brings a kind of narrative tension to a space.

Provenance is of no concern, unless a client specifies this as an interest. Rather, Carter is looking at form, texture and composition as any good artist or curator would. He is also a fervent admirer of the work of Van Day Truex, the Kansas-born decorator who was design director of Tiffany’s in the 1950s and an erstwhile president of Parsons School of Design. So much so that Carter has taken Truex’s mottos as his own: “Control, edit, distill.”

In Carter’s words, his aesthetic is “about curating things I love that you wouldn’t necessarily think go together.”

Though he tends to anchor his rooms with 18th- and 19th-century American and Continental antiques, Carter is not averse to injecting modern flair where appropriate. He can pull this off smoothly only because he intuitively understands design’s more subliminal psychological threads. By exploiting them, what he strives to do is actually evoke a palpable feeling and a tactile response. “The forebear to the [Arne Jacobsen] Egg chair is the wing chair,” he declares, acutely perceiving the sense of shelter and embrace that underlie the allure of both, though on the surface they could not appear more different. “They make perfect sense together if handled thoughtfully.” 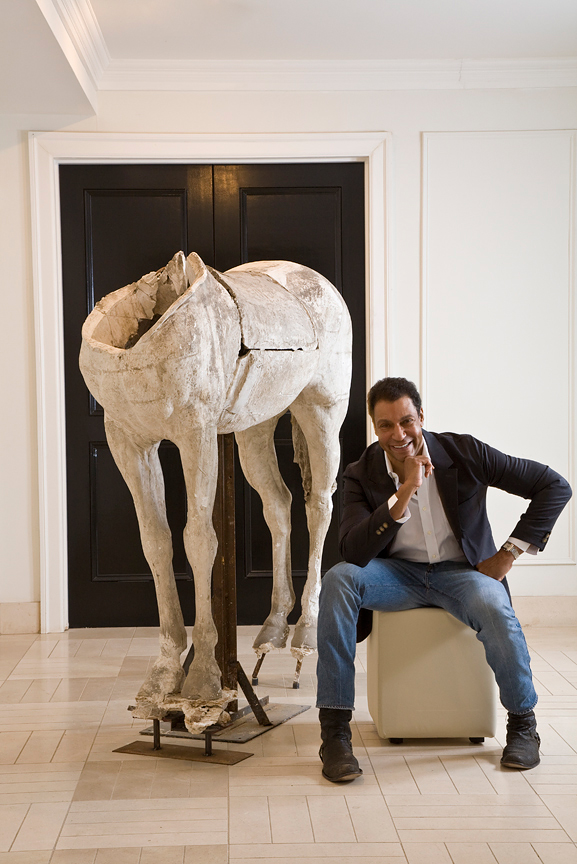 Carter sits next to an equestrian sculpture by Paul Wayland Bartlett in the foyer of his D.C. townhouse.

Against the backdrop of the current rage for idiosyncratic interiors, it may be easy to miss the tremendous nuance of Carter’s process. But who else would take a stained and broken ceiling rosette and install it in its fractured state in order to both bring texture to a space and communicate something about the ephemeral nature of time? It is that sort of thoughtful but unexpected detail, inserted as part of a harmonious mix, that is important to Carter’s flawless élan.

“A house singularly populated by antiques can look stilted and unwelcoming,” he cautions, “But eclecticism can be just as hackneyed. Often it’s a license to commit crimes. There has to be discipline and subtlety.” In a way, his lawyerly instincts are particularly useful here, since the delicate balance of disparate elements is nothing if not a kind of arbitration among seemingly opposing parties.

Carter’s style could hardly be more suited to Washington’s younger milieu. “I often get the second generations of big families, which tend to live in important homes,” he says. “The first words out of their mouths are ‘I don’t want my grandmother’s house.’ ” His deep respect for architecture and his innate love of classicism assure the maintenance of a home’s historic family context.

But his more practical, contemporary sensibilities make the rooms relevant for today. “I don’t restore anything,” he says. “Things that suggest wear also suggest use, and thus the invitation to use them.” This is a thoroughly modern notion, grounded in the busy pace of contemporary living and our need for approachability and comfort.

But could another career change be afoot for the 48-year-old Carter? “I collect cufflinks, watches and buttons,” he says. “For several years, I have designed and had hand-tailored many elements of my wardrobe — jackets, shirts, vests and pants are among them. In addition to these are things such as cufflinks and luggage of my own design. . . . I think designing cufflinks would be a fun thing to do.” And who knows? Maybe all will finally come full circle and the cufflinks we’ll see on the wrists of lawyers in the nation’s capital and beyond will be designed by Darryl Carter. Lord knows that crowd is long overdue for a makeover.