The Manhattan-based interior designer has given the Upper East Side residence of a pair of stylish empty nesters a graceful decor befitting their refined taste. 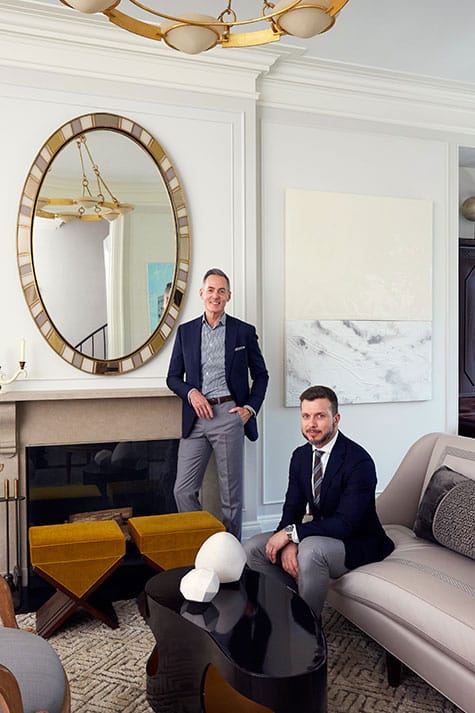 July 1, 2018David Kleinberg, standing, and partner Sean Matijevich take in the ambience of their recently completed Upper East Side project. Surrounding them is a curated collection of contemporary and vintage pieces, including X-frame stools by Axel Vervoordt, a lacquer table by Jacques Jarrige and artwork by Theodore Boyer. Styling by David Yarritu

When a style-savvy Manhattan couple moved from one Upper East Side residence to another after their daughter was grown and gone, they knew exactly whom to call for interior design of the highest caliber — and it wasn’t for the first time. David Kleinberg, long one of New York City’s top design talents, had decorated their previous apartment, so he knew which furnishings they had owned since “bachelor days,” Kleinberg says, and which pieces “they had every intention of keeping.”

Truth be told, the empty nest, a duplex with high ceilings and a curving staircase in a gracious prewar building overlooking the gardens and limestone walls of the Frick Collection, wasn’t much of a downsize. “They slightly reduced their overall square footage,” says Kleinberg, who founded David Kleinberg Design Associates (DKDA) in 1997, after 16 years at the venerable design firm Parish-Hadley. The new residence is, however, “configured in a very sybaritic way,” he continues. “It actually gives both husband and wife more space than before.” Two of the three bedrooms have been converted to other uses, one into a pretty study and glamorous dressing room for her and the other into a luxurious mahogany-lined dressing room for him.

These changes were part of a total reworking of the apartment’s layout, which dated from an era when hired help scurried through cramped hallways. Renowned architect Peter Pennoyer oversaw a transformation that pivoted on one small but critical gesture: the recasting of an existing powder room under the staircase into an elegant bar and passageway with a window framing the Frick. “Peter’s master stroke was figuring out how to make use of that lost space,” Kleinberg says. “He created a connection between the living room and dining room by doing so, changing the circulation of the apartment and making it much more contemporary.” A fitting upgrade for a modern couple who like to do the cooking and cocktail mixing for themselves and for guests.

When it came to choosing furnishings, Kleinberg says, “the intention was for the duplex not to feel rooted in any particular time or place. We didn’t want mid-century or old English — something less defined than that, but urbane and sophisticated and collected over time, which in fact it is.” A serene palette of silvers and grays unifies the wide-ranging, often unexpected, mix. Here, Kleinberg and DKDA partner Sean Matijevich, the project designer, take Introspective room by room though the design decisions that add up to a quintessentially Manhattan commission. 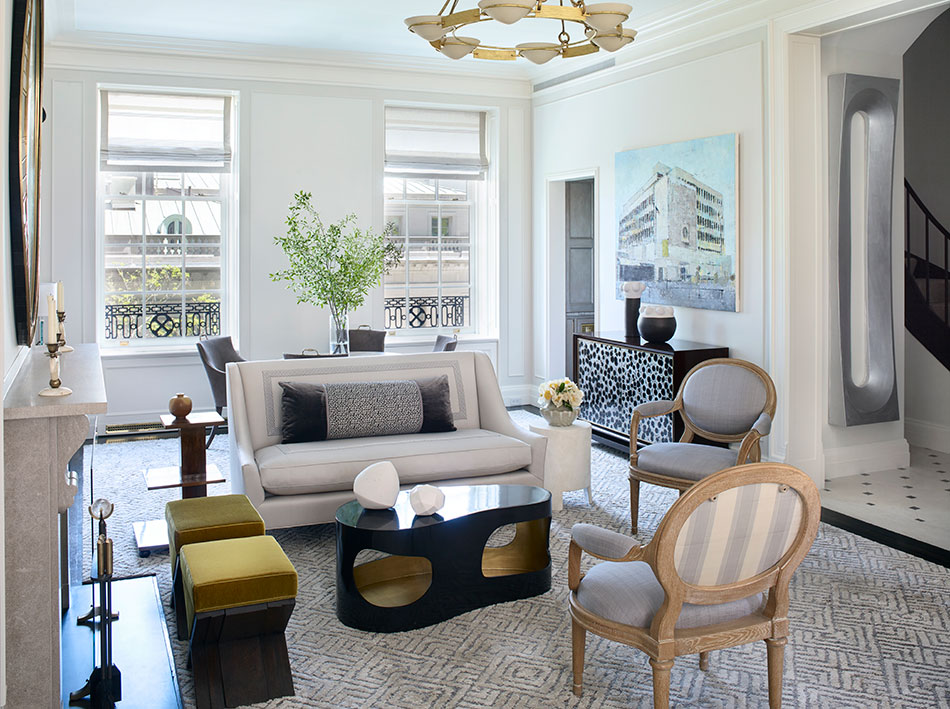 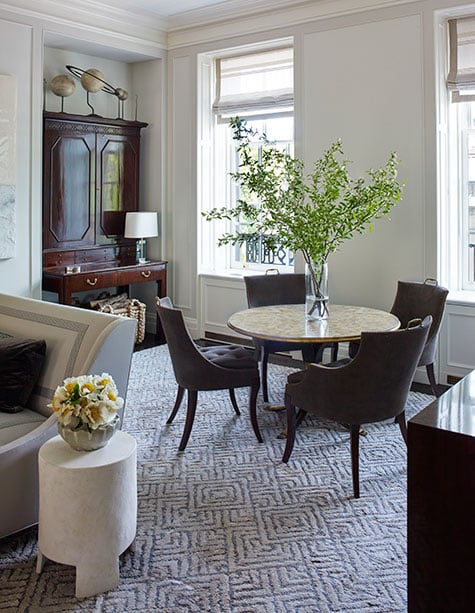 A couple of key pieces in the living room, including a round Maison Jansen table and tall antique mahogany English architect’s desk bought decades before, came along with the homeowners from their previous apartment. All the upholstered pieces, including a settee by the fireplace that is modeled after one in a 1940s magazine photo, were newly designed by DKDA to suit the scale of the rooms and custom made by Anthony Lawrence-Belfair, a Long Island City–based upholsterer with whom DKDA often works. Seating for at least a dozen includes a pair of 1970s whitewashed-oak oval-back armchairs made in Paris for designer David Hicks and purchased from 1stdibs dealer Louis Bofferding; a pair of custom DKDA-designed armchairs upholstered in Scalamandré fabric; and, in front of the fireplace, two simple, “kind of constructivist” X-legged benches from the Antwerp- and Hong Kong–based dealer Axel Vervoordt. A contemporary amorphic, pearl-gray-lacquered coffee table by Jacques Jarrige, with a gold-leafed interior, and an oval 1970s Italian mirror encircled with colored glass declare this room independent of any particular design party line. Softly lighting the space is a contemporary chandelier of gilded iron and alabaster from Alexandre Biaggi in Paris. The custom cabinet in a corner is one of a pair designed by DKDA, with paneled fronts of hand-finished glass silvered and oxidized by Brooklyn-based artisan Vesna Bricelj. 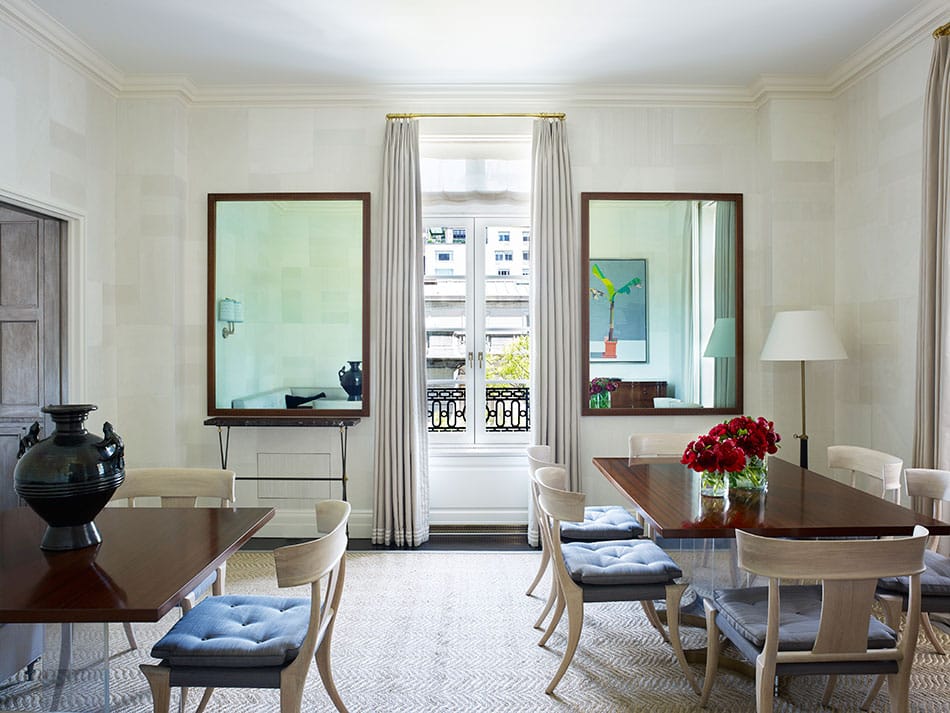 In an unconventional dining room setup, DKDA used not one but two custom tables: a large one for entertaining and one more intimate in scale, with a banquette, for the homeowners to use when dining alone. The two pieces, which can be combined for sizable groups, both have bases of Lucite and steel designed by Alessandro Albrizzi — acquired through 1stdibs dealers Showplace Antique Center and Louis Bofferding — and tops custom-crafted of ribbon mahogany. Ten Klismos-style chairs by Stewart MacDougall for Glenn of California, obtained through 1stdibs dealer Dragonette Ltd., were originally stained dark, but Kleinberg took a different tack. “We bleached them to get a matte finish and a dried-bone color, in keeping with the cool tones that run through the apartment,” he says. The treatment pairs well with walls of Venetian stucco, done in a patchwork of textures and patterns. 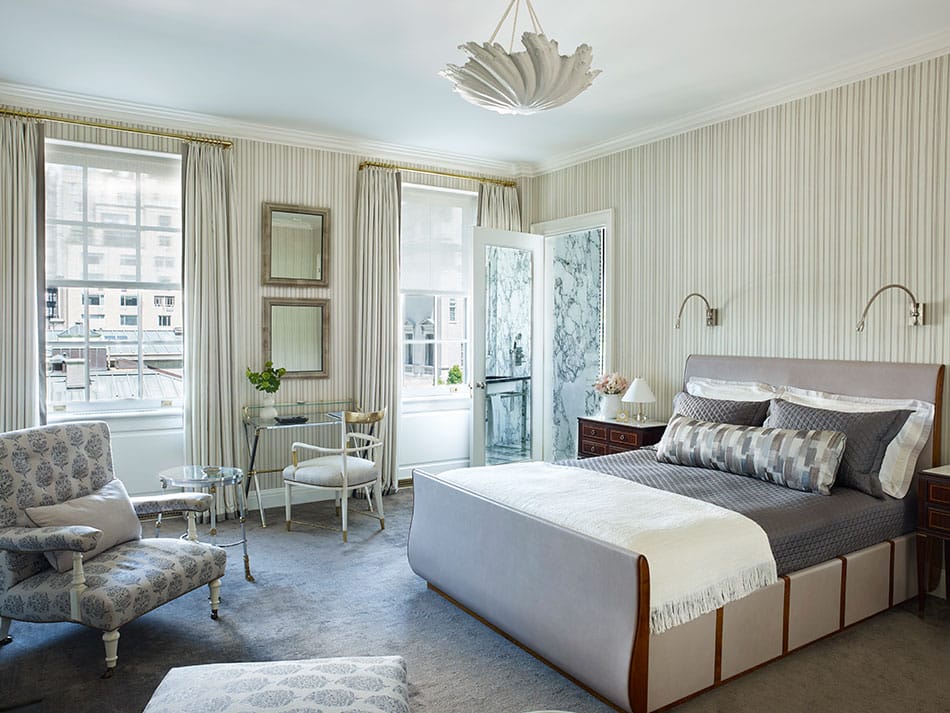 Taupe-striped wallpaper in the master bedroom sets off an unusual pair of 1940s four-drawer cabinets with fluted fronts by Frances Elkins, from 1stdibs dealer Full Circle Modern. Many of the other furnishings were sourced from 1stdibs as well, including a glass and metal Maison Jansen writing desk from Little Paris Antiques, a pair of Bakalowits table lamps from HPS Design Interior and Paolo Buffa bedside tables from Karl Kemp Antiques. DKDA designed the bed, which is upholstered in leather with mahogany side rails. 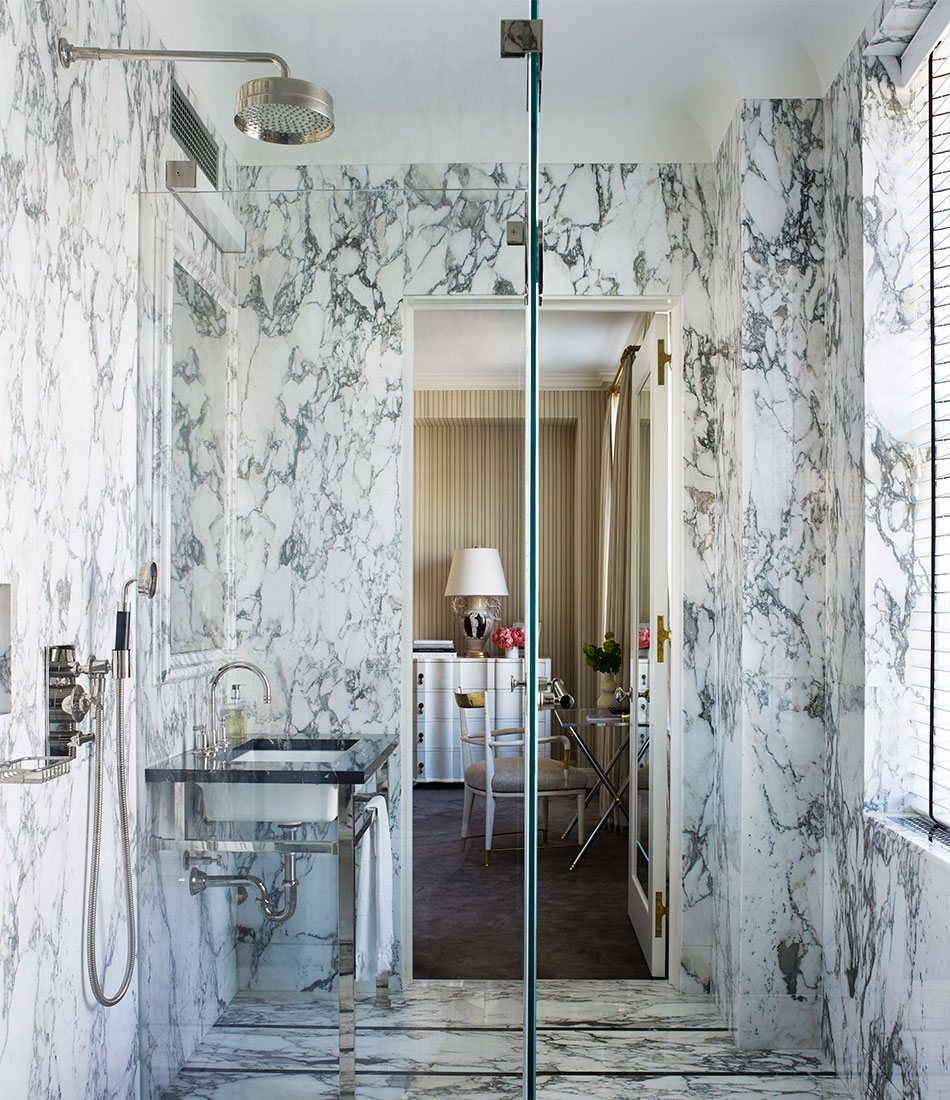 The master bath is clad in highly figured Arrabescato marble, with black marble accents. It was inspired, Kleinberg says, by similar treatments in Milan’s Villa Necchi Campiglio, a chic 1930s residence designed by Milanese architect Piero Portaluppi that is now a historic house museum. (It was also a silent costar in the 2009 film I Am Love). 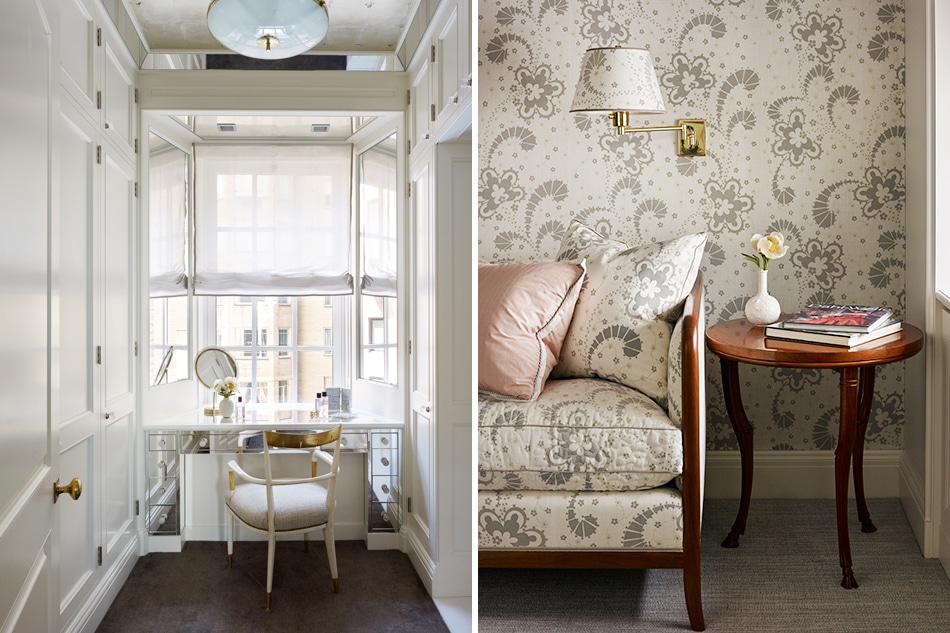 In the wife’s pale pink and gray study, even the swing arm lamp is covered in the same sweet custom-colored floral print as the walls and upholstered pieces. Called Gemma, it came from Zina Studios, which offers “a trove of vintage hand-blocked print designs,” Kleinberg says.

Custom cabinetry in the dressing room incorporates a built-in vanity table with a mirrored front, which is accompanied by a cream lacquer and gilded Giò Ponti chair. The John Widdicomb desk was sourced through 1stdibs dealer Assemblage. 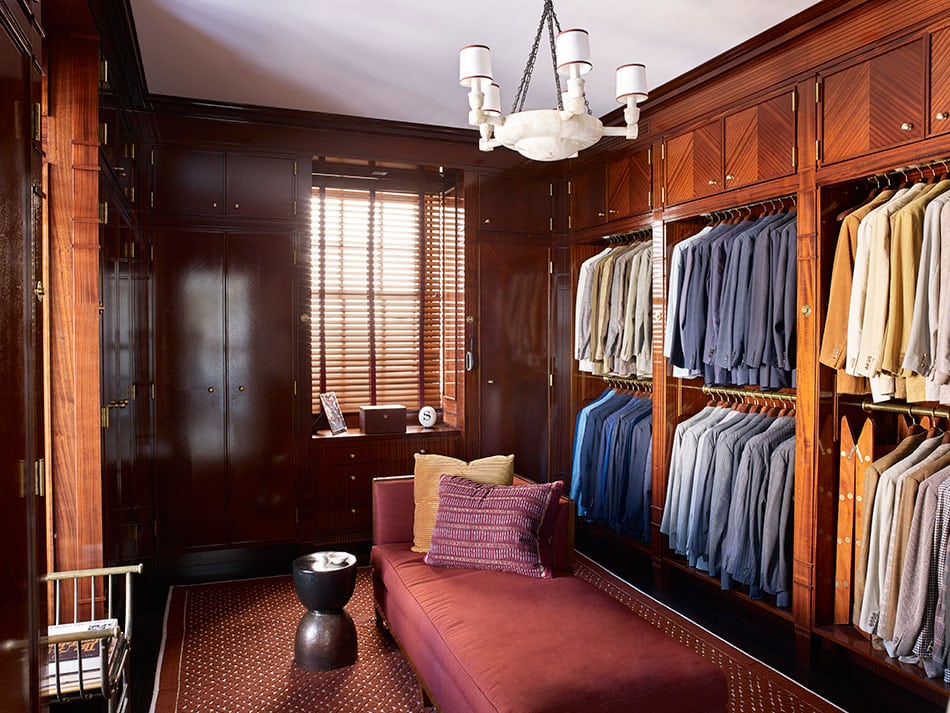 “A nineteenth-century idea of a man cave” is how Kleinberg describes his client’s custom mahogany dressing room, complete with chaise longue. “He’s a very natty gentleman who enjoys his clothing and wanted a beautiful place to stretch out and read the paper,” the designer says. There’s even a small TV. The metal and glass console by Pierre Vandel came from Roark Modern. 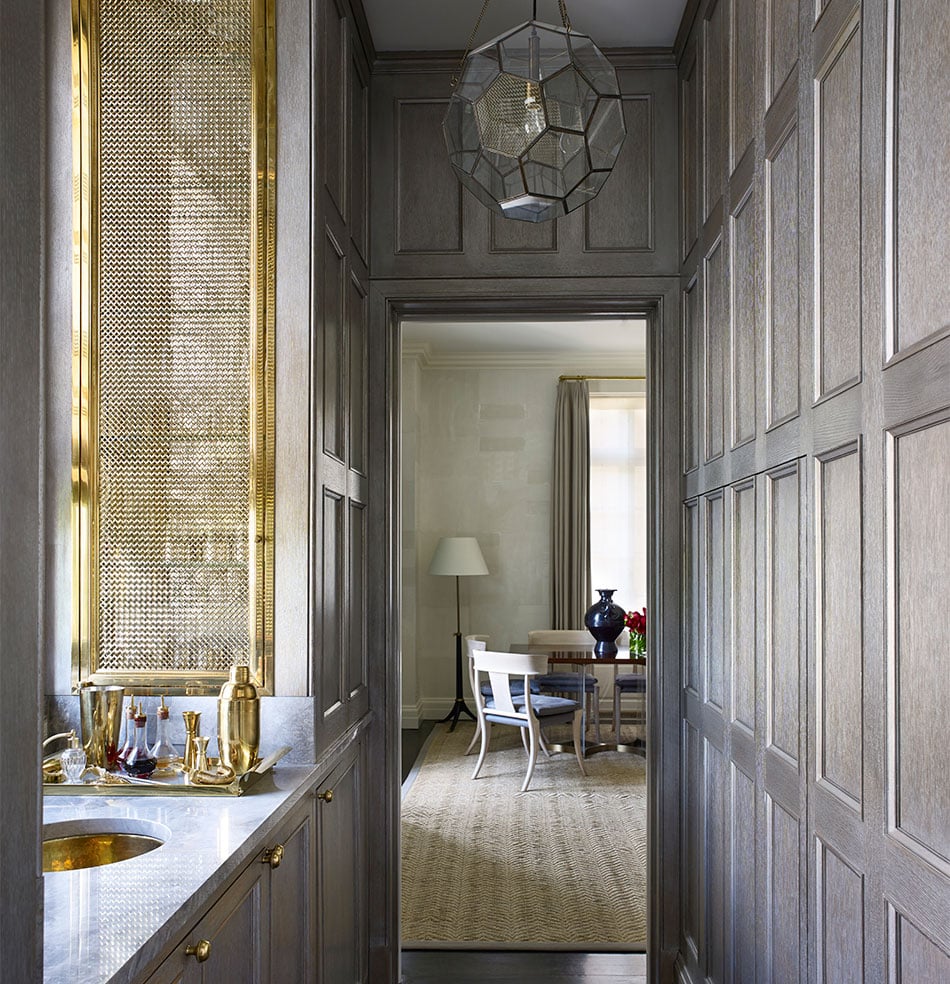 Oak-paneled walls stained gray, delicate brass grillwork and faceted brass pendant lights from Arteriors confer glamour and importance on the former powder room, converted by Peter Pennoyer into what has become, as Kleinberg puts it, a “bonus entertaining space.” 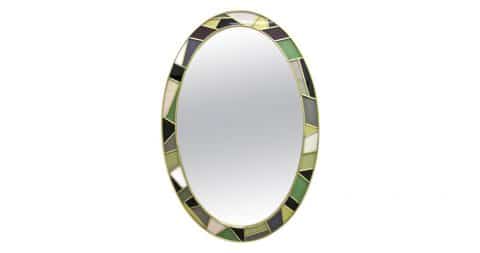 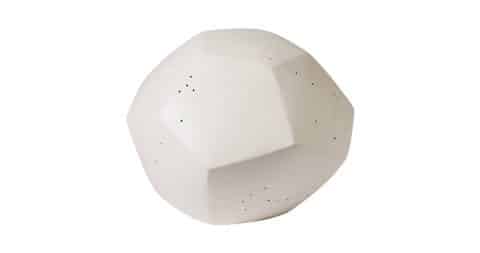 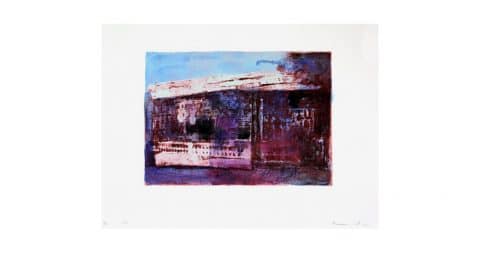 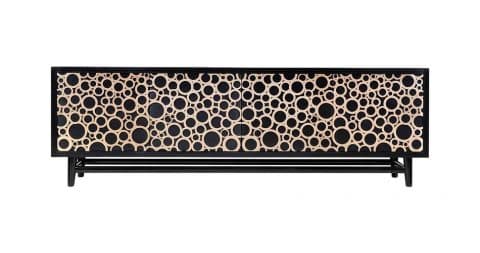 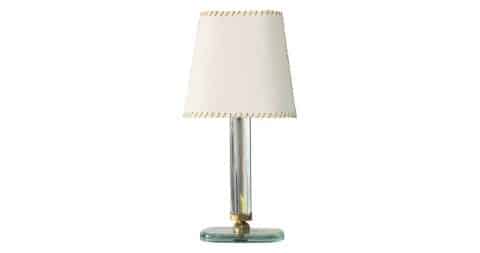 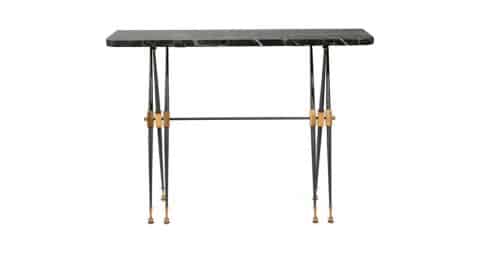 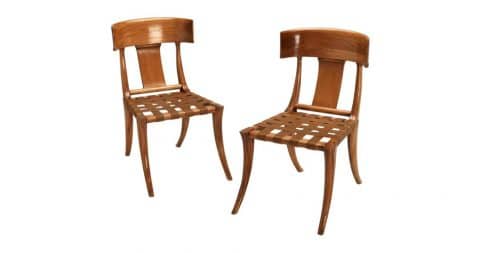 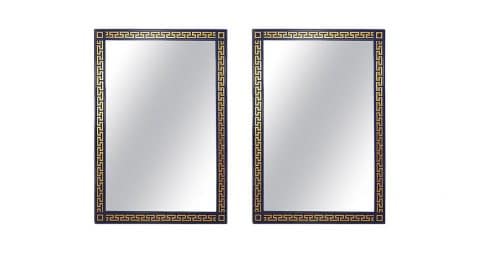 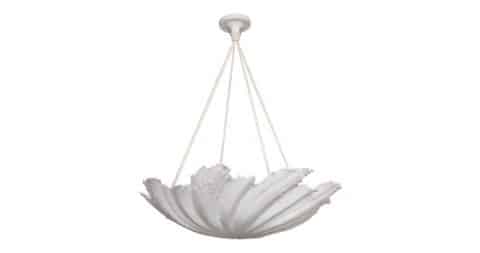 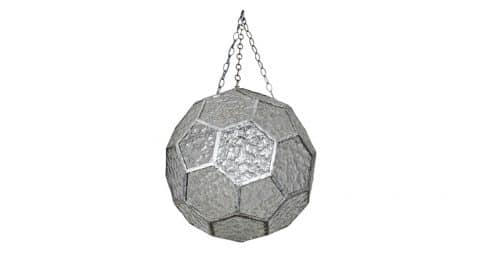 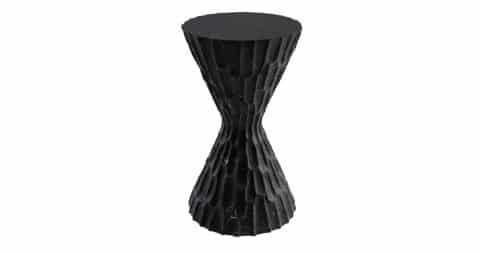