How Villa Necchi Campiglio Plays Muse to All Sorts of Designers

Creatives have channeled the mystique of this Milanese mansion into a variety of media.
by Cara Gibbs
Pin
Share
Tweet
Email

Perhaps it is Villa Necchi Campiglio’s ability to stand against time that beckons admirers to its perimeter for a closer peek. The timeless Milan villa has long acted as muse for creative types spanning all different art forms. Most notably, it was cast in a leading role by Luca Guadagnino for his 2009 film I Am Love.

The director has said he was drawn to the home’s “restrained sensibility,” expressing that “it shows the obsession with perfection and details that the Milanese bourgeoisie have.” Guadagnino’s movie sparked a new resurgence of enthusiasts, who flocked to Italy’s fashion-forward city in search of inspiration from the mansion. 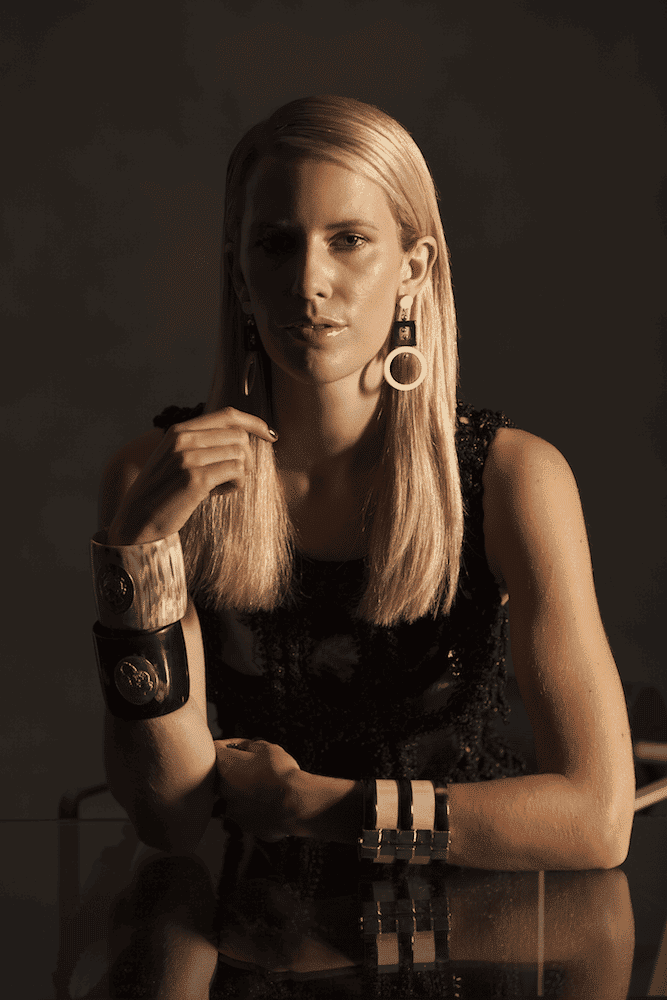 The combination of wood and cow horn in these custom cuffs by Clair Fouché mimic the marble patterns in Villa Necchi. Photo by Franco Pasti

Case in point: artisan-minded British jeweler Claire Fouché turned to the Italian villa for guidance when dreaming to life many of her standout pieces. “I’ve been to Villa Necchi several times, as I’m often in Milan visiting my husband’s family,” Fouché says. “The chic simplicity of the architecture of the villa as well as the interiors have influenced my signature pieces. In particular, the villa’s elaborate monochromatic marble floors, textured wood ceilings and bronze features on the doors and walls have inspired my cuff designs.” 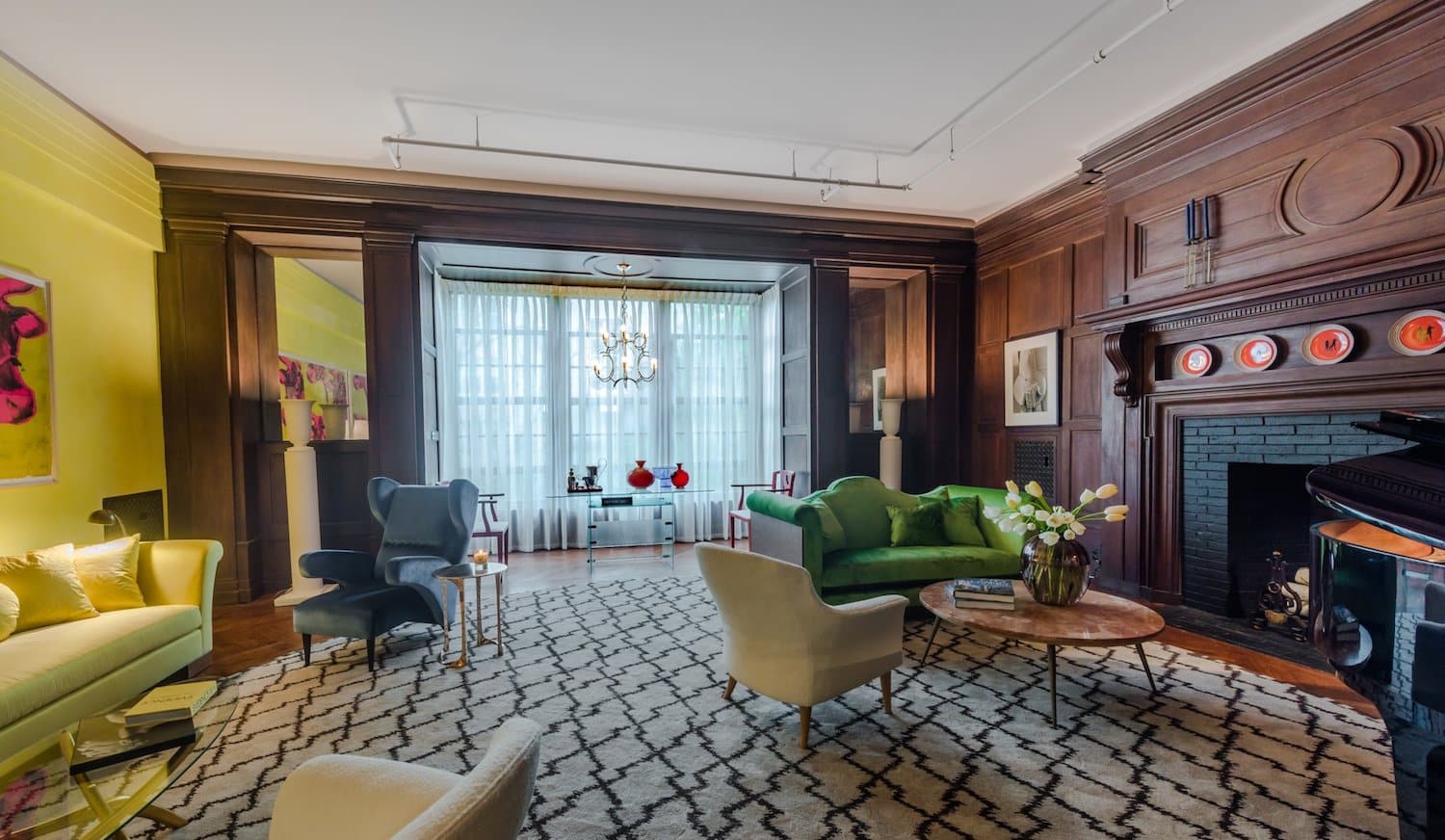 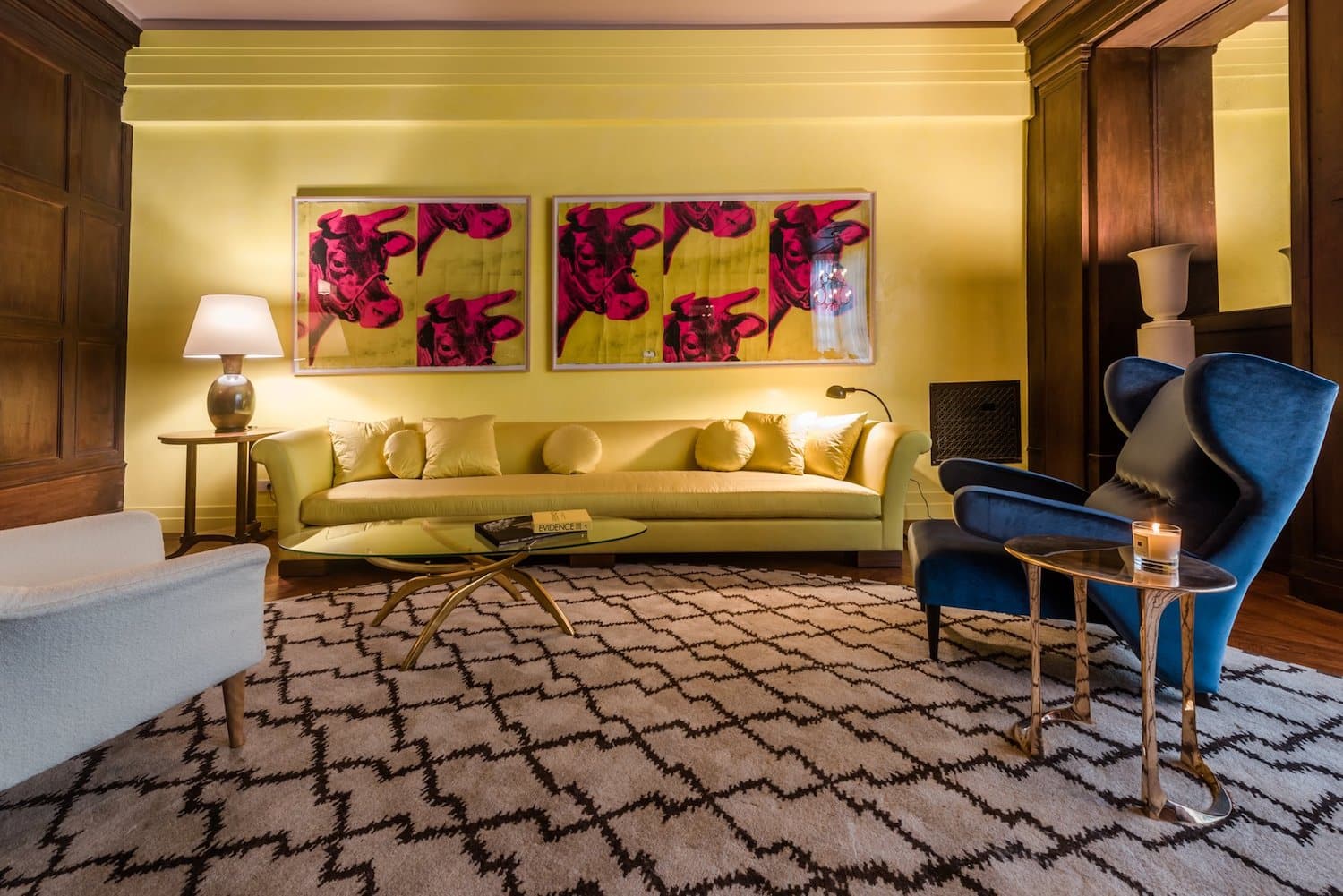 Another view of RAMSA’s Kips Bay living room shows work by Andy Warhol and Italian and French furniture from the 1930s through the ’50s. Photo by Alan Barry Photography 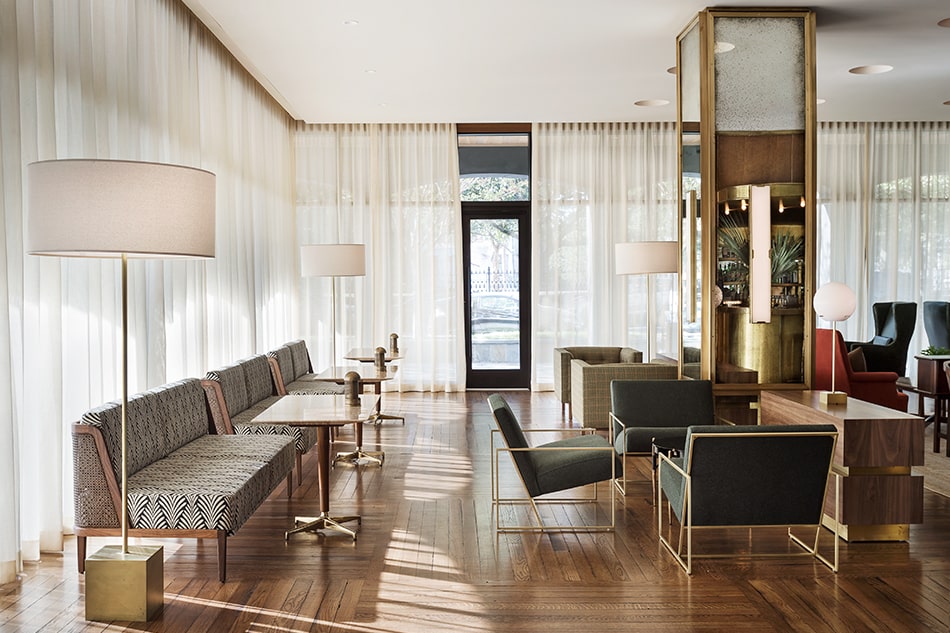 Workstead’s design for the recessed lights at the Dewberry hotel in Charleston, was directly influenced by fixtures in Villa Necchi. Photo by Matthew Williams 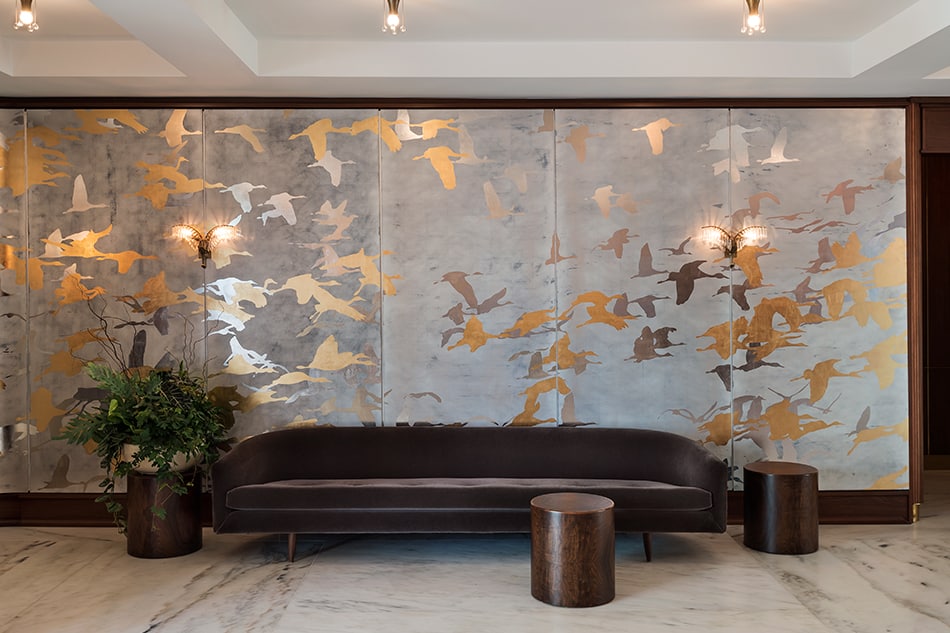 More Villa Necchi vibes are found in the entryway of the Dewberry. Photo by Matthew Williams

And last year, the esteemed architectural firm of Robert A.M. Stern reentered the world of designer showcases, taking on a ground-floor space in New York’s Kips Bay Decorator Show House. When assembling his living room, Stern, in collaboration with Lauren Kruegel and Ross Alexander, turned to the famous villa as a source of inspiration.

Stern says: “Villa Necchi, which we admired for its stripped-down classicism in the film I Am Love, inspired us to combine a selection of Italian furniture dating from the 1930s through the 1950s with modern French pieces from the same period.” The home’s influence can be felt throughout Stern’s design and evokes undertones of the mansions careful mixture of impressive artistry and deliberate restraint. 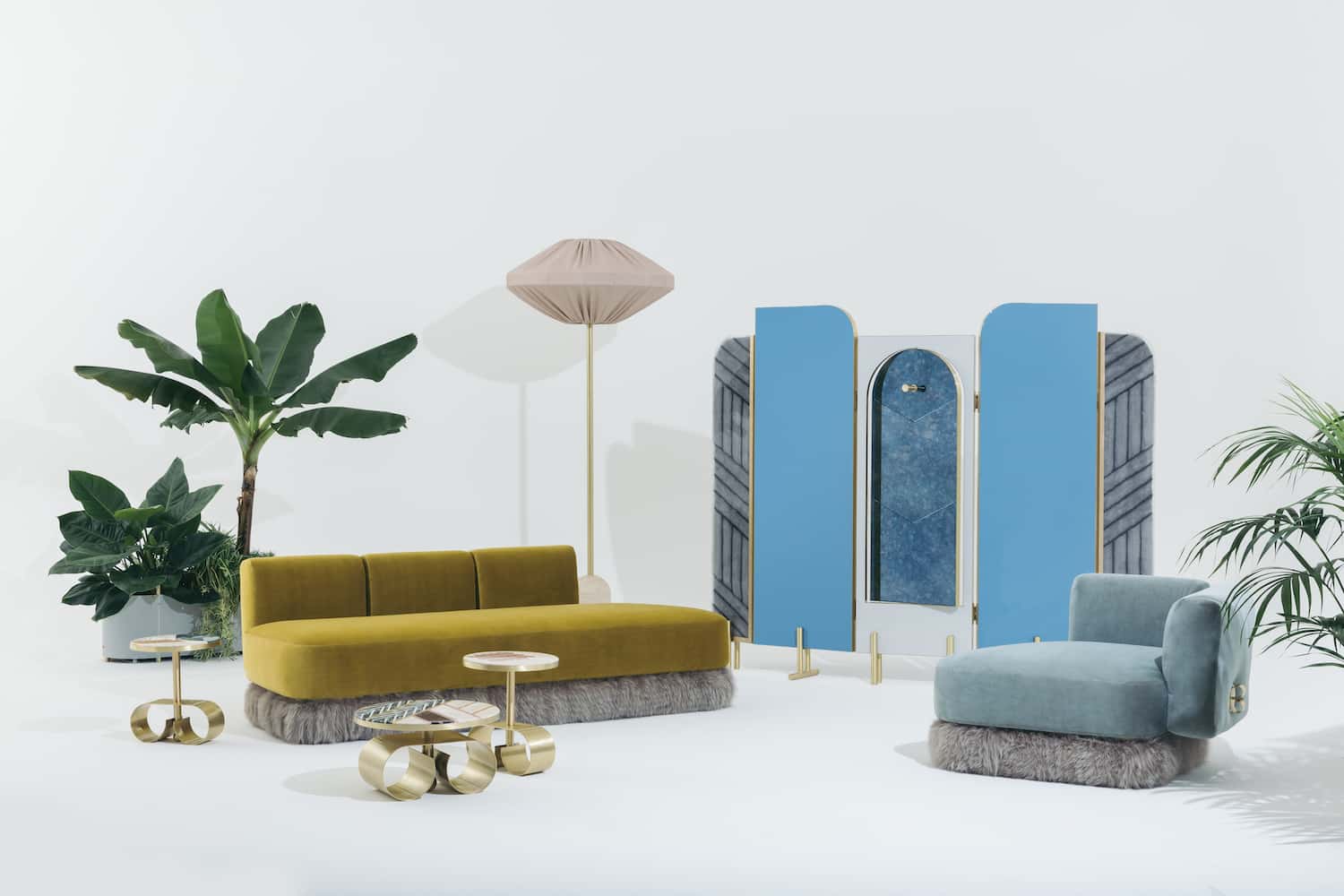 Italian design darling Cristina Celestino is also enamored by the mansion’s mystique. “It’s the ability for the architecture to be classic and contemporary at the same time,” she explains. “There’s something magical about a very detailed and well-finished design that also appears simple and sober.” Celestino also points out the home’s tech-savvy advances: “Just think about the ventilation and heating system — they’re so highly functional and cleverly hidden and concealed within the rigorous beauty of Piero Portaluppi’s interiors.”

The mansion’s vibrations can be felt throughout Celestino’s work, from her uber-chic product design like the Happy Room furniture she created for Fendi to her interiors like the Sergio Rossi concept shop in Paris. “The exaggerated but dignified beauty of this house and garden, hidden in the center of Milan, represents the spirit of the city.” 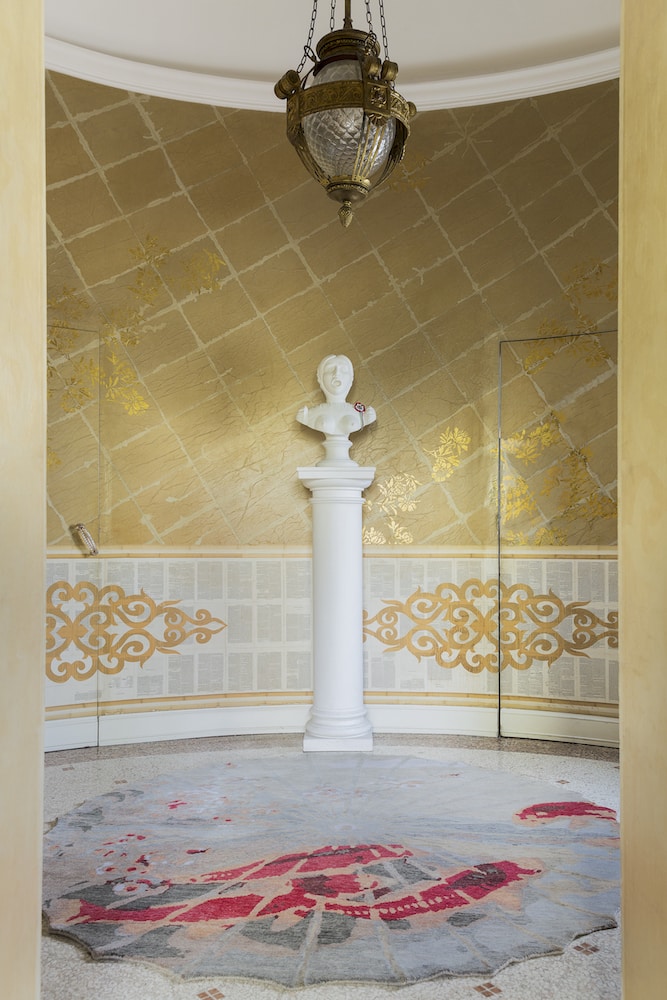 Vito Nesta found inspiration for his Wagasa carpet in the elaborate textiles throughout Villa Necchi. Photo by Andrea Pedretti

Burgeoning product designer Vito Nesta turns to the villa for cues that inform his varied collections. “The tapestries of the house have certainly influenced my work. Observing them has strengthened my approach and my understanding of design as it relates to decoration,” explains Nesta, referring to the home’s vast anthology of 17th-century masterpieces.

“The ancestral union between ancient and modern has always intrigued me,” he continues. “Despite being a period house, it remains very contemporary. Everything exhibited at Villa Necchi seems to give an evident message of beauty.”

The geometric pattern of the wood veneer in this cabinet by Pietro Russo clearly nods to the wood paneling in Villa Necchi. Photo by Filippo Bamberghi

A true artist first and foremost, Milan-based designer Pietro Russo draws inspiration from the mansion’s early rationalist character. Russo says: “It’s the perfect revisitation of late-1800s decoration. You can feel the more contemporary Nordic influences in the way the space is organized and designed, but also the Italian touch in the materials and details, which give a warm and intimate feel.” And by the look of the shapely silhouettes of Russo’s pieces contrasted with his use of fine lines and geometric patterns, comparisons with the iconic residence are easily devised.

Even a big-name brand like Italy’s own Kartell uses the mansion’s unwavering charisma as the backdrop for its latest collection. In the marketing campaign, bright, modern furniture pieces seamlessly fit in the nearly century-old architecture, proving that the appeal and artistry of Villa Necchi Campiglio is anything but fleeting.