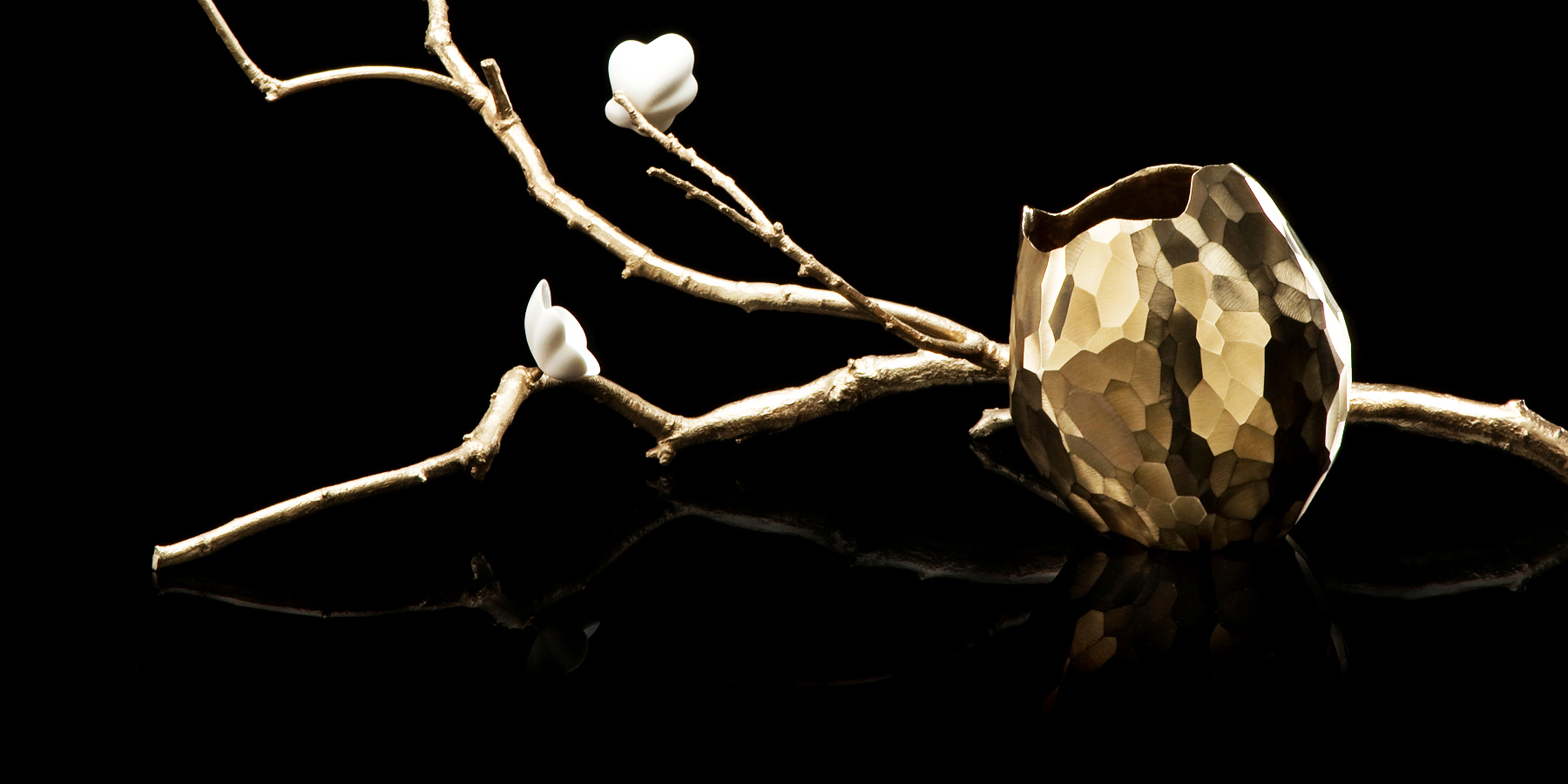 Committed to the bygone notion of handcrafted ornament, Los Angeles–based artisan David Wiseman finds inspiration in nature's forms, from crystalline snowflakes to the petals of a flower, to create meticulous, subtly surreal pieces of furniture, lighting, tableware and more. 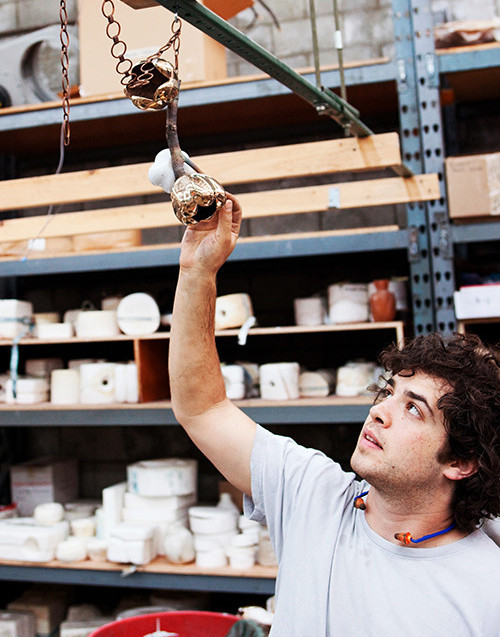 April 10, 2013David Wiseman, seen here at work in his Los Angeles studio, speaks of “bringing ornament back” with his creations (photo by Mark Hanauer). Top: The bronze-and-porcelain Table Branch, 2011, and bronze facet vase, 2008–10, are available through New York gallery R & Company. All photos by Sherry Griffin except where noted

The contretemps over the role of ornament in good design has raged for centuries, maybe even millennia. (One can imagine the cavemen of the Ardèche disagreeing over how many handprints were “too much.”) To Adolf Loos, ornament was a crime; to Louis Sullivan it was the very identity of his buildings. And, of course, the Bauhaus and successive modernist movements eschewed the frilly stuff altogether.

For his part, the young artist, craftsman and designer David Wiseman offers up yet another, more moderate view. “It’s a passion of mine to bring ornament back,” says the Los Angeles–based Wiseman, speaking about the slightly surreal, nature-inspired furniture, lighting, objets d’art and tableware he creates from porcelain, plaster, bronze, terrazzo, enamel and glass. But Wiseman’s work doesn’t merely revive a bygone art. His more ambitious aim is to ennoble ornament by imbuing it with function and meaning. Even more resolutely than historic decoration lovers such as Hector Guimard and Antoni Gaudí, or more contemporary ones like Marcel Wanders, he actually seems to start with ornament and work backward toward utility.

“Most of the time it’s about coming up with an idea that excites him and then figuring out how to make it functional,” says Rodman Primack, an interior designer who is an avid collector and commissioner of Wiseman’s work. “To him, decoration is not a pejorative statement, as if it doesn’t have conceptual validity and weight. David has flipped that claim and said that decoration is inherently beautiful.” 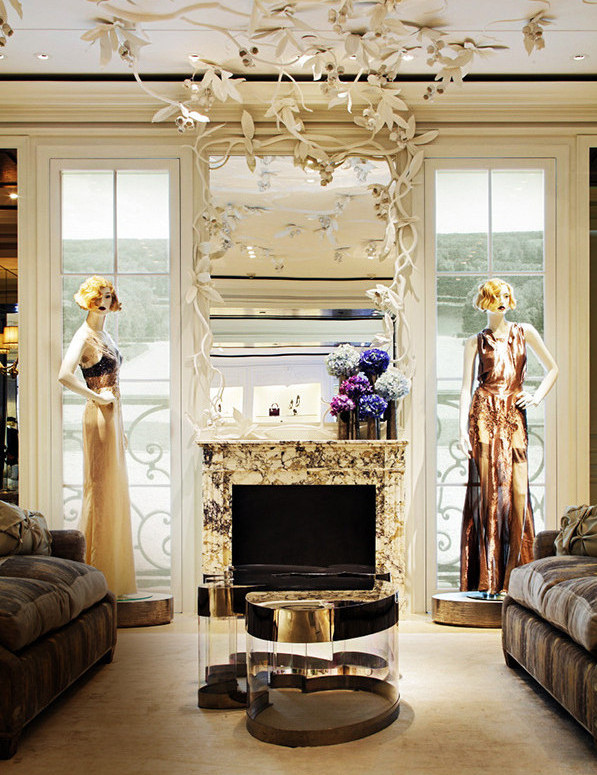 For the Peter Marino–designed Dior flagship in Shanghai, Wiseman installed hundreds of porcelain lily-of-the-valley blossoms along the walls and ceilings. Photo by Kristen Pelou

This approach has already made Wiseman, only 31, wildly popular with a diverse group of art, design and fashion cognoscenti: Primack has commissioned several ceiling reliefs from Wiseman for projects on both coasts; Peter Marino contracted him to create a “Lily of the Valley” ceiling installation for the Christian Dior flagship boutique in Shanghai; and he is currently juggling a dozen additional projects around the U.S. and in London and Brussels.

“David captures nature in the most beautiful and elegant way,” says Wendi Murdoch, who collects Wiseman’s work with her husband, Rupert. “He uses old-world techniques and craftsmanship but with a modern twist.” And Anne Crawford, the socialite and ambassador for fashion accessories house Roger Vivier, believes that the artist “will be appreciated and valued the way the Lalannes are today; his work has that same magic.”

“We’ve never had an exhibition sell through as quickly as David’s,” says Evan Snyderman, co-owner with Zesty Meyers of the New York gallery R & Company, which represents Wiseman and mounted a show of his limited-edition furniture, lighting and tableware items, as well as a specially commissioned wall relief last November. “People didn’t buy just one thing; they bought three or five.”

Last month, Wiseman traveled with Snyderman and Meyers to Design Days Dubai, and, on April 16, as part of a series of 1stdibs-sponsored lectures centered on the subject of collecting at New York’s Museum of Arts and Design, Wiseman and Meyers will discuss the subject of art patronage before an audience. 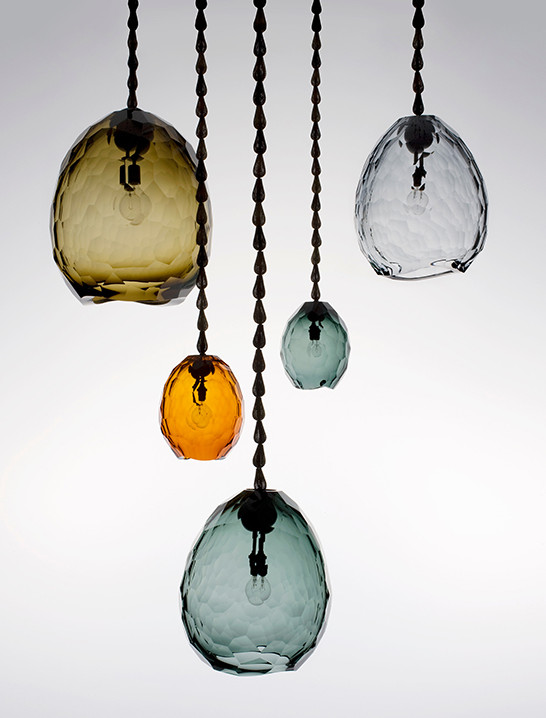 “Much to my dad’s disappointment, the science gene skipped a generation,” says the Pasadena-born Wiseman, son of an oncologist father and social-worker mother. Indeed, Wiseman’s older brothers, Josh and Ari, also have creative careers: Josh, who lives in Israel, is a painter, while Ari is deputy director of the Guggenheim in New York.

Wiseman attended the Rhode Island School of Design, where he majored in furniture design and took courses in ceramics, woodworking and metalworking. In his sophomore year, he created a wall-mounted hat hanger of fiberglass-infused gypsum that looked like a deer — a chapeau could hang on its ear — and he sold multiples of the design in such hip stores as Plastica, in Los Angeles, and The Future Perfect, in Williamsburg, Brooklyn. For his degree project, Wiseman created his first “wall forest,” casting fallen branches in water-based resin and affixing them to a gallery wall. Primack saw this installation and hired Wiseman to create a site-specific “Cherry Blossom Canopy” in a Los Angeles home he was designing. That year Wiseman also met Todd Oldham, who brought him to New York to work on his do-it-yourself craft book Handmade Modern, for which Wiseman created functional and decorative objects out of hardware-store finds.

Feeling homesick in New York, Wiseman returned to California in 2005, setting up shop in his parents’ garage and beginning to build the commissioned-installation arm of his business. The next year, his work was selected for “Design Life Now,” the 2006 Design Triennial at the Cooper-Hewitt. Then came his association with R & Company, which brought him to the 2008 edition of Design Miami during Art Basel, where his work was an instant hit.

“David captures nature in the most beautiful and elegant way, using old-world techniques and craftsmanship,
but with a modern twist.” 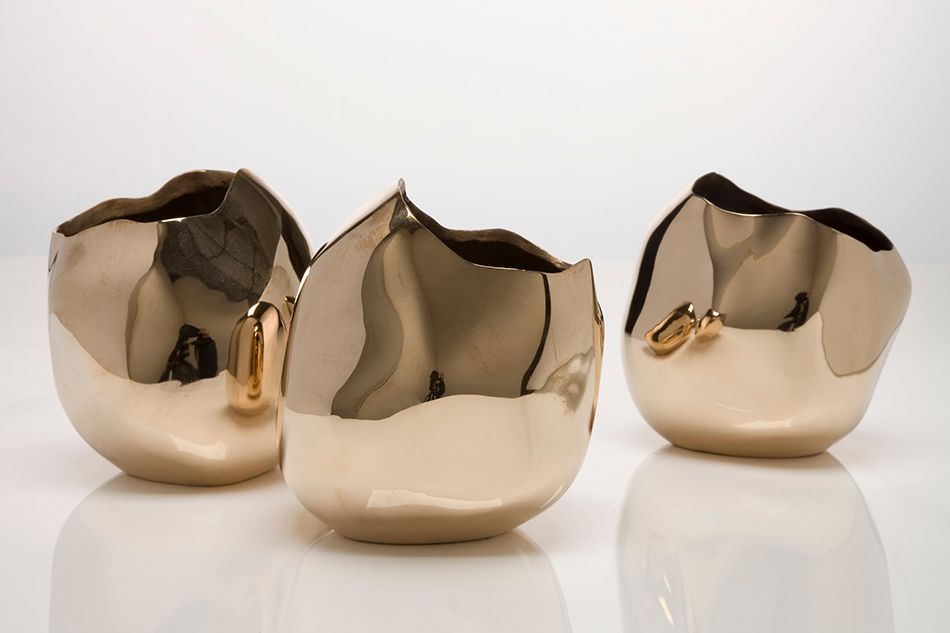 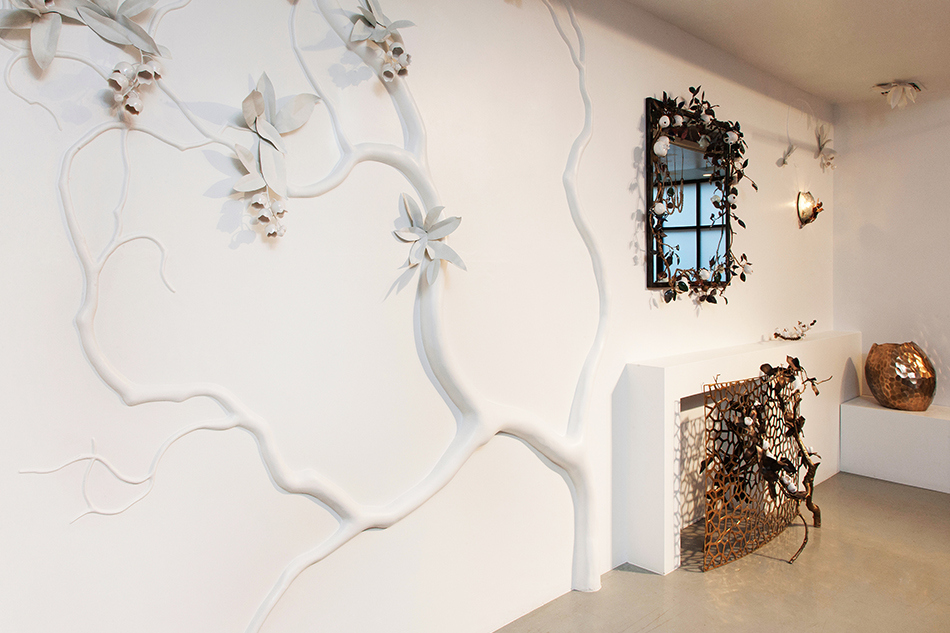 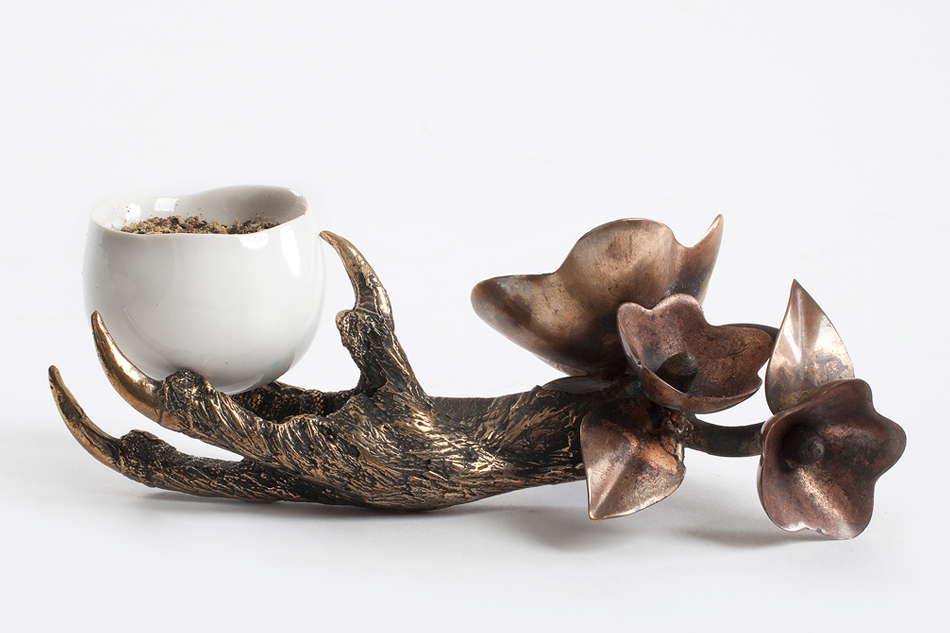 The Talon pepper well in bronze and porcelain, 2012

Wiseman designed an assortment of tabletop items for his 2012 exhibition at R & Company.

Today, Wiseman employs four full-time assistants at a 2,200-square-foot atelier in L.A.’s Atwater Village, with another 1,000 square feet outside. Here he forms and fires porcelain, casts bronze, experiments with enameling, mixes his own terrazzo, does water-jet and computer cutting and hand-silvers mirrors.

All this is in service of his naturalistic forms, which reference a dizzying array of periods and styles: the spiky Baroque decorative vocabulary of the Wiener Werkstätte’s Dagobert Peche; Claude Lalanne’s eroticized surrealism; Japanese porcelains; the lattice-like patterns created by grouting on the stone walls surrounding the Korean country houses called hanoks. No single aesthetic prevails; instead Wiseman combines them all in endlessly original ways, filtering them through his own unique point of view.

“He’s in love with nature, in awe of it,” says Primack. “But he’s not afraid to change it. Like a scientist, he’s creating new kinds of plants and trees.” Case in point: An installation where gingko leaves hang from branches more closely resembling oak, a hybrid Wiseman created because they gave the composition a more “sinewy” quality.

“It’s so easy to be literal when you cast from nature,” explains Wiseman. “The trick is to bring a sort of narrative to it.” And in his work, those narratives are palpable. When he designed the deer hat hook, for example, Wiseman imagined the fantastical landscape the animal lived in, with “faceted volcanoes” that later became vase and crystal pendant forms. A tablescape in the R & Company show, meanwhile, was a universe unto itself — branches turned into candleholders, an entire forest floor of pod-like forms morphed into salt-and-pepper wells. (Just as Robert Mapplethorpe’s photographs of flowers were inherently sexual, so too does Wiseman’s oeuvre exhibit a certain sensual fecundity. “I’m happy to walk that line,” he says. “But I’m coming from a slightly more naïve perspective.”) 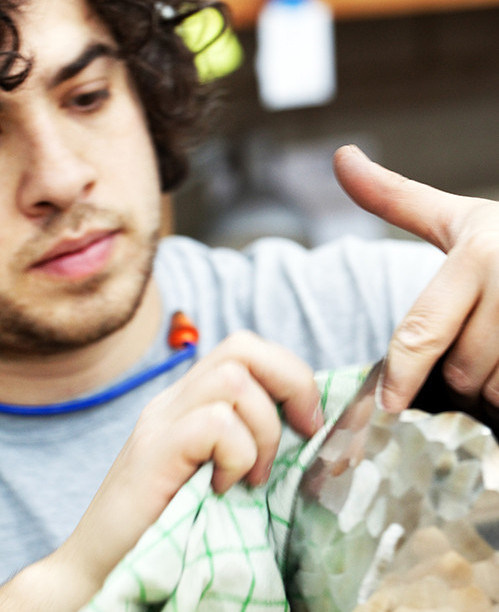 “He’s in love with nature, in awe of it. But he’s not afraid to change it,” says Primack of Wiseman. Photo by Mark Hanauer

In some works, ornament functions as the structure of a piece — a chain motif serves as a support leg, a hanok-style lattice comprises an entire table — transcending its “decorative” character to become something fundamental. “It heightens the integrity of ornament to use it as structure,” says Wiseman.

Wiseman also brings new meaning to the concept of collage. Because he experiments with so many materials, he says, “My studio was becoming an installation in itself.” So, drawing on his fondness for Dadaist assemblage, he began creating the three-dimensional illuminated ceiling sculptures he calls “collage chandeliers,” mixing porcelain castings of ropes and flowers with bronze chains and branches, crystal pendants and other forms.

Wiseman’s work is beguiling in part because it covers so much ground, both materially and aesthetically. People can discover a variety of different ways to engage with it. “He’s creating classic design, but it’s also about the moment,” concludes Snyderman. “The attention to detail, the craftsmanship, the quality of the materials, the history behind it. There’s one artist per generation who can do that, and to my mind David is that one.”