Unfair as it may seem to single folks, the old saying is probably true: Two heads are better than one. When life partners work together in the art and antiques business, they’ve got other advantages as well: two sets of eyes for scouring the listings, four hands for moving furniture, double the energy, double the imagination.

In honor of Valentine’s Day, we’ve asked five couples from our 1stdibs dealers’ roster to tell us what it’s like being a design duo. Are their tastes similar or wildly divergent? Who does what, and how do they decide? How do they balance each other’s strengths and foibles? Read on to find out.

Cordelia Lawton and Patrick Mull met in 1994 at the famous Iowa Writers’ Workshop, where they edited each other’s stories. They’re still editing each other’s work, but now this consists of visual narratives composed of furnishings and artwork of unusual refinement, unbound by style or period. At Lawton Mull, they help their clients build collections of art and objects spanning centuries, from romantic oil portraits to impeccable modernist furnishings. They also offer poetic pieces of their own design, like the Daedalus table, whose patterned top is made of goose feathers under glass.

Their eyes have long been attuned to beautiful things, wherever they may find them. As a teenager, Mull picked up a piece of steel chain in a shipyard and, considering it a “ravishing work of art,” hung it on his bedroom wall. “I once convinced a fruit vendor to give me his price sign, written in marker on cardboard,” Lawton recalls. “The Arabic letters were visual poetry.” 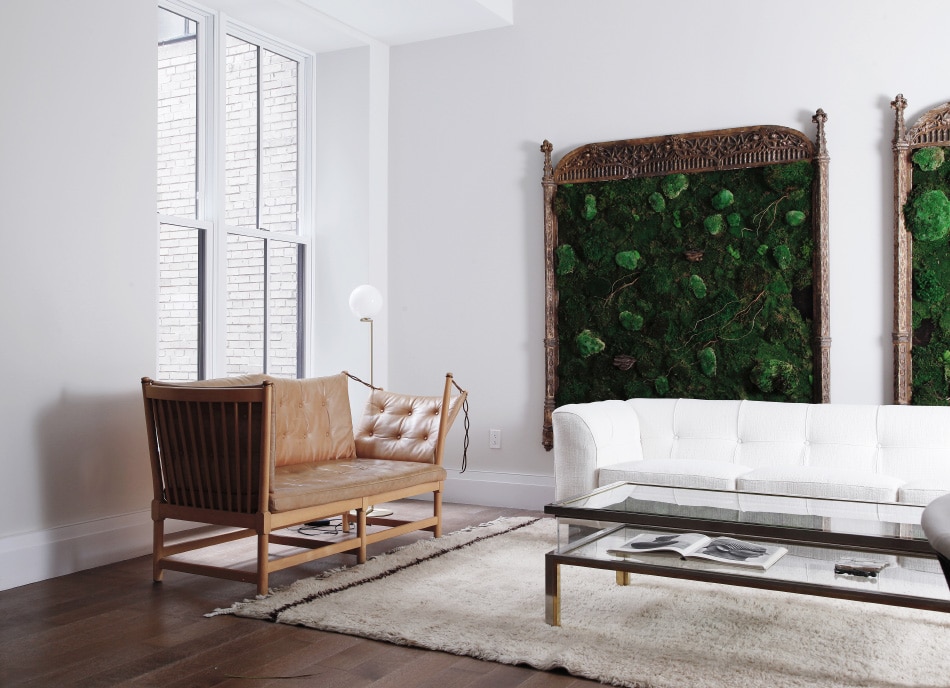 Lawton and Mull staged this luxury residence for sale in Brooklyn Heights using inventory from their collection, including their own original Moss Follies. The space shown here includes a spoke-back leather loveseat by Børge Mogensen for Fritz Hansen, an Arne Norell sofa, a Romeo Rega vitrine table and a vintage Moroccan Beni Ourain rug. Above: Lawton and Mull in their Long Island City design studio. Photos by Patrick Mull

As partners in life and business, working out of a space in Long Island City and the 1stdibs showroom at the New York Design Center, “we each wear a lot of hats, and they are mostly one size fits all,” says Mull. “One day, I’ll be making drawings for a new design and Cordelia will be hunting for mohair velvet. Later, we might head to Brooklyn for a studio visit. The next day, one of us might be at a museum research library while the other takes a chair over to our restorer.”

Administrative tasks, correspondence and social media generally fall to Lawton. Mull, she says, “has a great gift for the hunt” and is responsible for photographing their works. Both move furniture and handle art, although Lawton refuses to drive the U-Haul.

Together, they make up what Lawton calls “an ideal collector, with an insatiable appetite for beauty and wide-ranging curiosity. Our roles combine in so many ways that whatever we create, whether it’s a work of decorative art or a staged model apartment or a new installation in our showroom, is a true collaboration.” 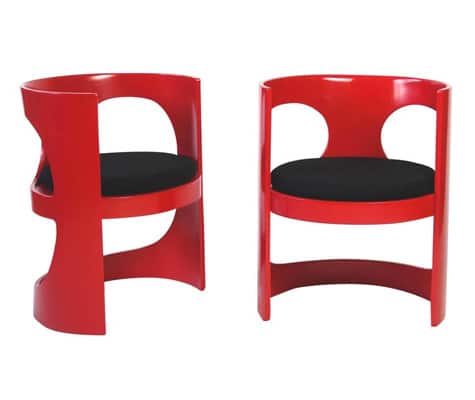 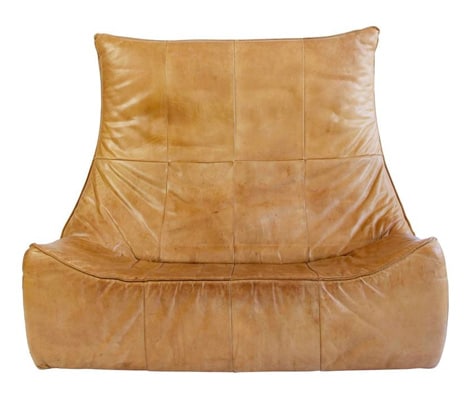 Scotsman Andrew Duncanson and Swede Isaac Pineus met in an Edinburgh pub in 1993, moved together to Gothenburg, Pineus’s hometown, two years later, and to Stockholm the year after that. In 1998, Duncanson opened Modernity, an encyclopedic gallery of 20th-century Nordic design. Pineus kept his day job as a reporter for Sweden’s largest daily newspaper until 2012, when he started working at the gallery full-time. From an elegant 19th-century building in Stockholm’s Östermalm district, they sell rare and museum-grade furnishings, glass, ceramics, lighting and jewelry, some by hallowed names like Wegner, Jacobsen and Aalto; others by designers who are less well-known but eminently worth discovering.

Perhaps because their roles are clearly defined — Duncanson buys, sells and shapes the aesthetic of the business, while Pineus handles finances, administration, business development and human resources — things run quite smoothly. “I’m actually surprised we don’t clash more,” Pineus says. “Having the same goals and vision for our business certainly helps.” 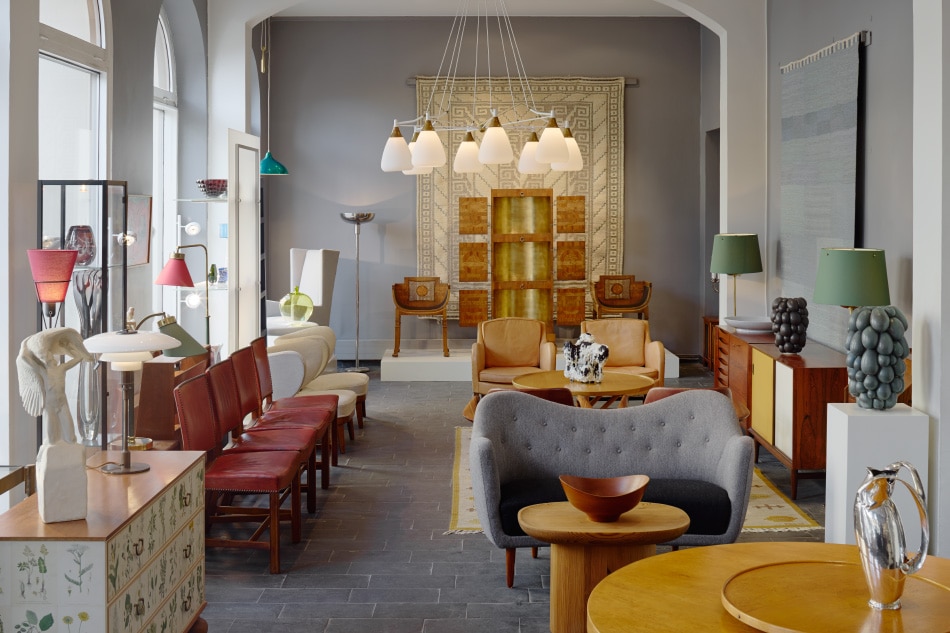 Modernity‘s Stockholm showroom features mid-century Scandinavian modern furniture and objets. The gallery sold the golden cabinet at the back, created by Carl Hörvik for the 1925 Paris World Exhibition, to the National Museum of Sweden. Above: Andrew Duncanson (left) and Isaac Pineus. Photos courtesy of Modernity

Defining their respective tasks was fairly obvious, says Duncanson. “Just look at my desk — I’m not a particularly organized person. I like dealing with clients, and I’m at our showroom in Stockholm on a daily basis.” He also mans their exhibits at six fairs annually: “It’s crucial for me to be there from opening to breakdown.”

Pineus admits he’s less knowledgeable about art and design history. “What I really enjoy is the management part, being the engine inside the beautiful machine Andrew has designed,” he says, adding that although their tastes have converged over the years, “if we happen not to agree, I tend to let Andrew have the last word. I trust his instinct.” 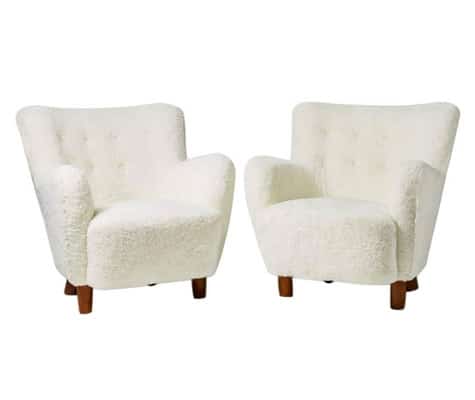 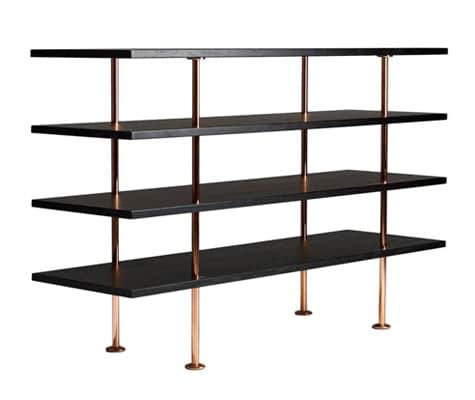 Christian Swafford and Lauren Larson, who met a decade ago as students at New York’s Parsons School of Design, put in their time working for big-name interior designers: Swafford for Studio Sofield; Larson for Victoria Hagan, among others. A few years ago, the couple, who have been dating since 2010, decided to meld their talents and launch Material Lust.

From a space in Manhattan’s Soho, they’ve birthed an expanding collection of furnishings, lighting and accessories in unique shapes and forms — fabricated locally and in Florence, Italy — that could be called Nouveau Gothic. The Twin Peak velvet sofa would be at home in the Addams family living room; the Crepuscule floor lamp in brushed brass looks like a cyclopean undersea creature.

Working together as designers was rocky at first. “In the beginning, we fought a lot and were super-defensive and got discouraged,” Swafford says. Building trust took time. When Christian designed the Pagan chair in blackened steel with a black Lucite seat, “I didn’t understand it.” says Larson. “But he was so passionate about it, I let it go, and it became one of our iconic pieces.” 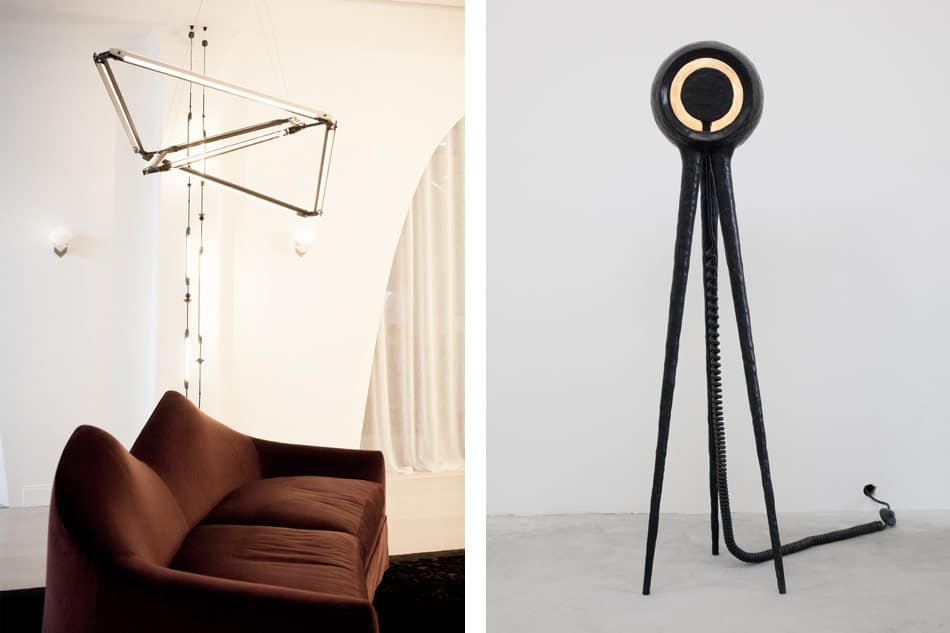 “We’re both Type A, but in different ways,” notes Swafford. “Lauren is schedule-oriented and on top of things, and I am more last-minute.” Says Larson: “Christian likes to wait until he’s in the creative mood. I’m always pressuring him to start working. But over the years, I’ve learned he will get it done.”

They’re both so involved in the design process that it’s not always clear who is responsible for a particular piece. Swafford introduced Larson to books of ancient and alchemical symbols, which became the impetus for their first line of furniture, called Geometry Is God. “I started drawing them over and over, and they turned into three-dimensional forms,” she says. “He rendered them on computer and figured out how they could actually be made.”

Two headstrong designers working together “makes things a little impassioned,” Swafford says. “But we’ve realized that strife is part of the process, and we’ve learned to embrace it.” 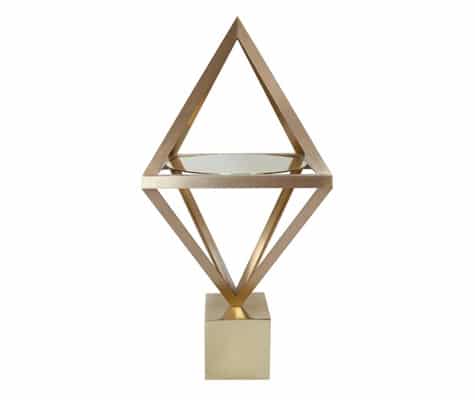 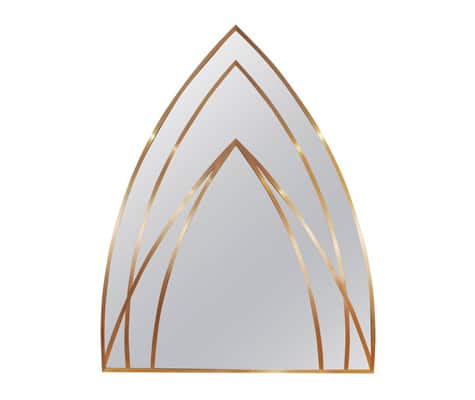 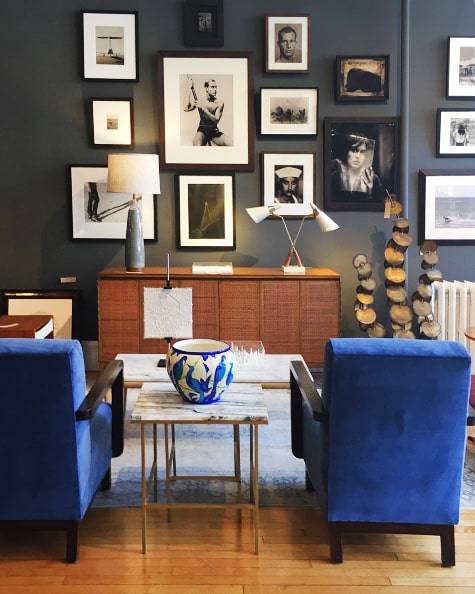 This tableau at Finch Hudson features a pair of 1940s blue velvet Danish armchairs, a Paul McCobb credenza and a lamp by Stone and Sawyer. Top: Andrew Arrick and Michael Hofemann (standing) with their wirehaired pointers, Matilda and Gunnar, during their new location’s opening weekend. Photos courtesy of Finch Hudson

Michael Hofemann and his husband, Andrew Arrick, took a major plunge several years ago. They gave up their Williamsburg, Brooklyn, loft and urban careers – Michael’s in finance and operations, Andrew’s in luxury fashion – and moved full-time to their circa 1797 farmhouse in upstate New York, hoping to establish themselves as dealers of vintage modern furnishings in the historic river town of Hudson. “That was unnerving,” Hofemann says. “We went from two good incomes to essentially none.”

But it has paid off. Their business, Finch Hudson, has prospered, and they’ve expanded their space twice. They’re now based in a 4,800-square-foot-gallery in one of the town’s exceptional marquee storefronts. Most of their stock is prime mid-20th century, but there are also antiques, including 19th-century oil portraits and pieces from the Arts and Crafts and Art Deco eras.

“We’re that annoying couple that rarely argues,” Hofemann says, perhaps because they have what he calls “different and very complementary skill sets. Basically, I buy it, and he places it.” That’s one thing that sets Finch Hudson apart from other vintage modern stores: Their wares are displayed in exquisitely composed vignettes. “Too often in vintage stores, one finds lots of furniture jammed together,” Hofemann says. “Great pieces, for sure — if you can see through the jumble. We create a visual context to show how people can include the furniture in their lives.” 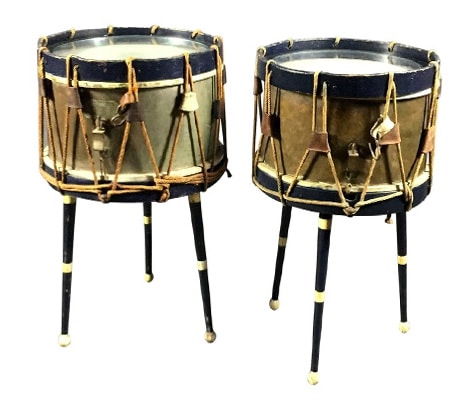 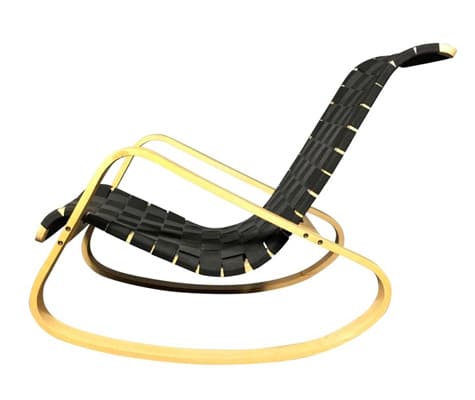 Lennox and Susan Cato discovered their common interest in art and antiques soon after meeting in a tiny music club in Brighton, England, some 40 years ago. Their partnership has endured, producing two now-grown children and Lennox Cato, their thriving business selling furniture and decorative arts of the Georgian and Regency periods in the town of Edenbridge, Kent.

Lennox has been plying the antiques trade since age 16, and he’s a familiar presence on the BBC’s Antiques Roadshow. “He’s the one with the knowledge,” Susan says. “He’s the specialist and buyer of our stock, and the one our clients generally want to deal with. I handle the administrative duties, marketing and bookkeeping, and keep the wheels moving smoothly.” Both enjoy setting up their stands at antiques fairs and arranging the gallery and window displays.

One secret of their longevity: “In general, we have very similar tastes, and Lennox will often ask me for my opinion,” Susan says. “We don’t always see eye to eye. If he buys something I don’t like, I will let him know. But he usually gets it right and will sell the item fairly quickly. I also know when to stand back!” 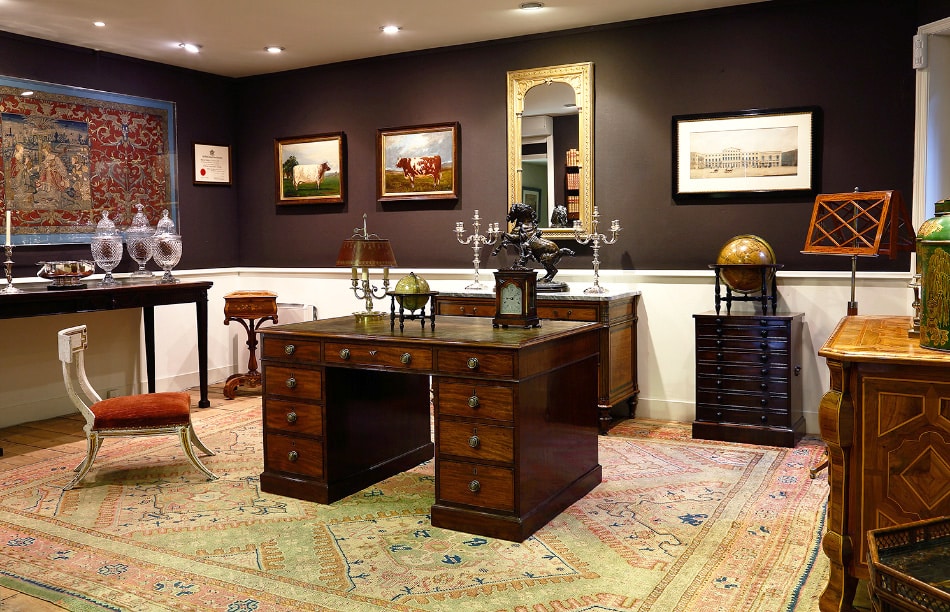 Lennox Cato‘s Edenbridge, Kent, showroom features a pedestal writing desk once owned and used by the late Geoffrey Godden, a world-renowned ceramics dealer in Sussex. Hanging on the wall is a large rectangular embroidery, ca. 1530, that depicts a scene from the Old Testament: Susanna and the Elders. Above: Lennox and Susan Cato. Photos by Kourosh Monirzad, Unica Art Services 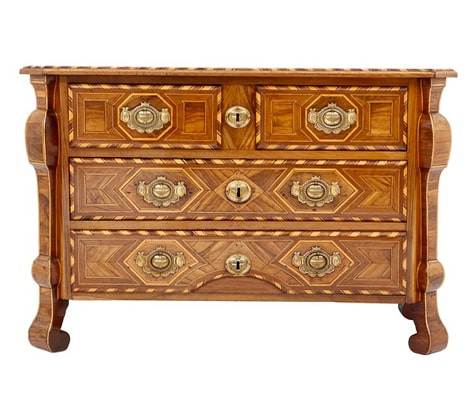 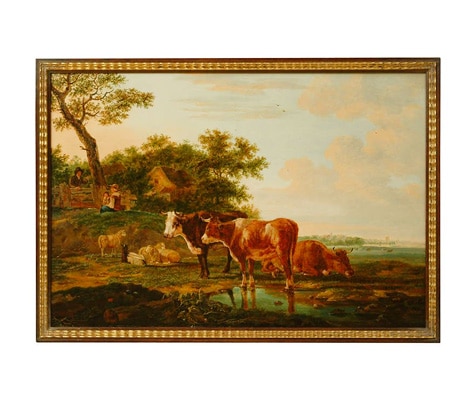