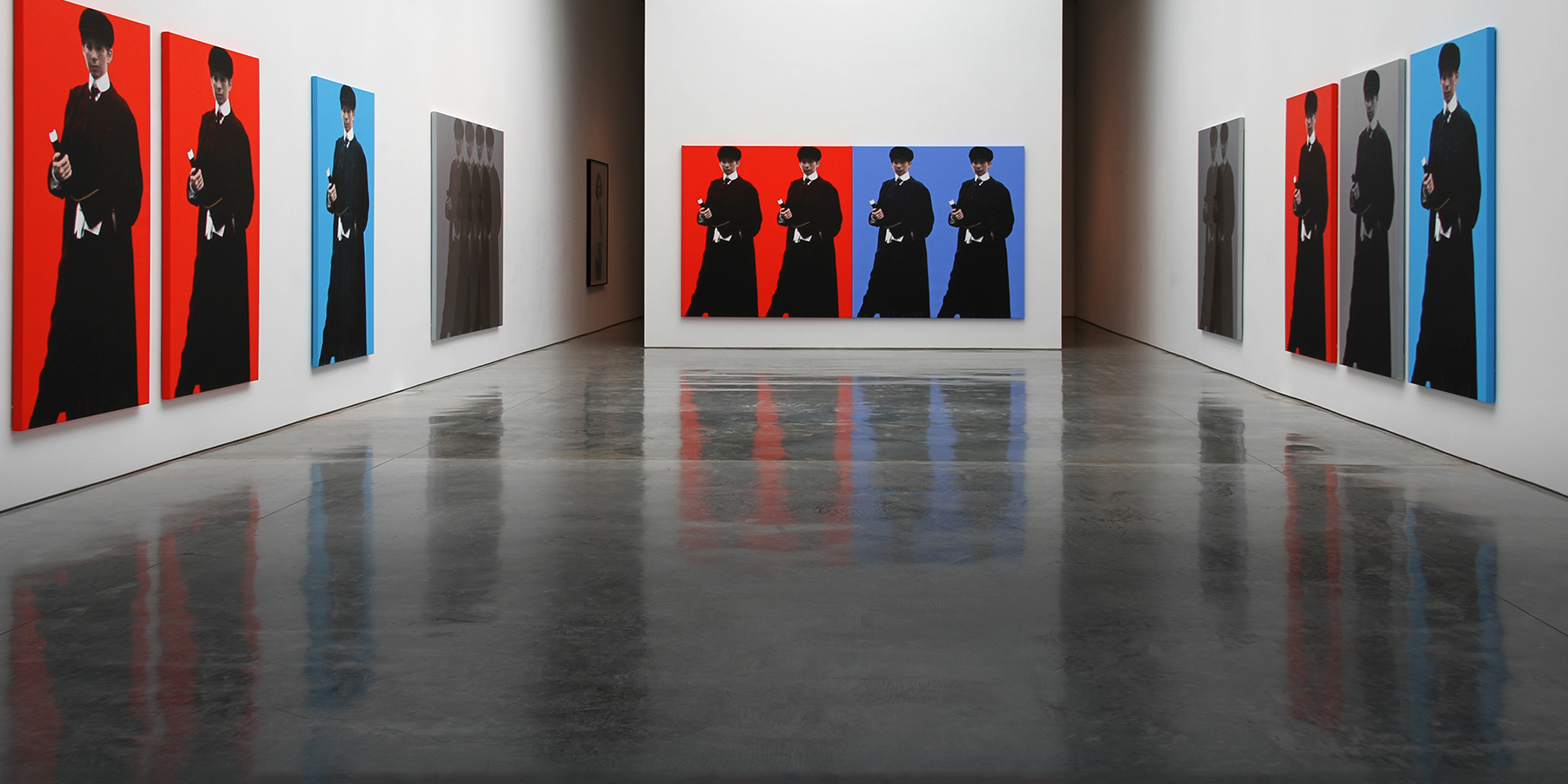 The ever-evolving artist believes in dissolving boundaries, elevating female artists and the genius of Barbra Streisand. 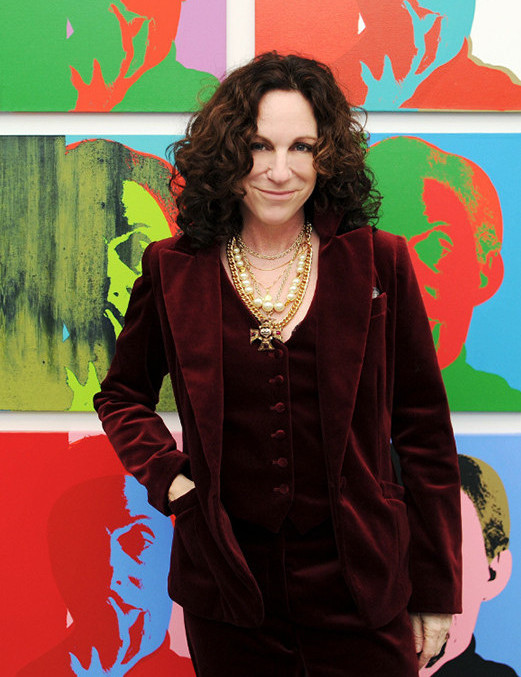 The signature paintings of Deborah Kass, done primarily in the 1990s and often riffing on the imagery of Warhol, come together in “My Elvis+” at New York’s Paul Kasmin Gallery through February 23. Image courtesy of the Billy Farrell Agency, LLC, all other images courtesy of Deborah Kass/Paul Kasmin Gallery and Artists Rights Society (ARS), New York. Top: An installation view at Kasmin shows a room full of paintings depicting Barbra Streisand in the movie Yentl, a popular motif for Kass.

Deborah Kass made her name in the late 1980s and early ’90s riffing on postwar greats from Jackson Pollock and Robert Rauschenberg to, most famously, Andy Warhol, giving their signature styles her own brand of feminist cheekiness. Her Warholesque silk-screen series of Barbra Streisand — portrayed both in profile (the star’s prominent, un-retouched nose the spiritual epicenter of the pictures) and as the cross-dressing protagonist of Yentl — said all that Kass felt needed to be said about women, beauty, ethnicity, assimilation and the art world.

But in discussing her “Barbras” 20 years later, Kass does not feign coolly detached irony. She does not resort to artspeak nor pretend that the choice of Streisand as muse was a purely intellectual one. Au contraire. Kass was and is Streisand’s number-one fan.

“I went to both concerts at the Barclays Center,” she gushes excitedly, referring to Streisand’s return to her native Brooklyn last fall. “I’ve seen all of her concerts since ninety-two or ninety-four — well, one of each.”

Kass, a musical-theater buff, refuses to pay scalpers’ premiums but admits to dropping $750 for a spot in the 16th row to see the great star, right behind the “famous people,” as she puts it, and “directly on her profile.” She continues, her native Long Island inscribed in her voice: “This is a tax deduction for me. This is legit.”

“Then I saw Ross Bleckner, who said, ‘Were you at the concert? Barbra gave me tickets.’ ” Kass rolls her eyes at the injustice. 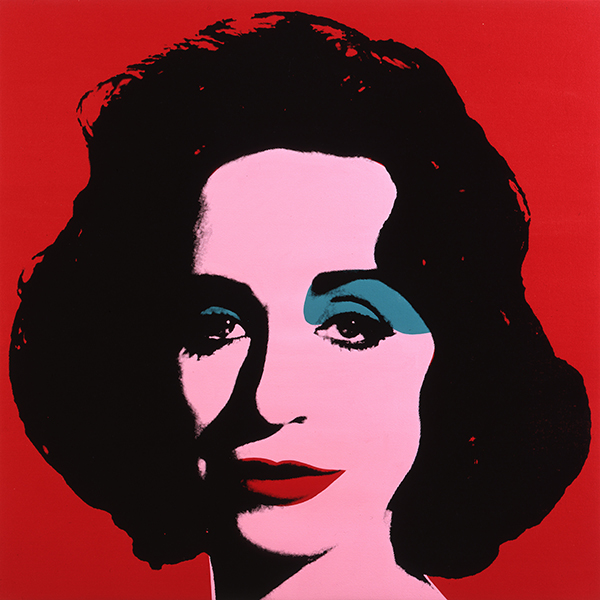 Red Deb, 2000, one of the final paintings in the artist’s “Warhol Project,” portrays Kass as Elizabeth Taylor.

Kass is short with thick, wavy, reddish-brown hair and blue eyes. She is sitting in the Paul Kasmin Gallery, where “My Elvis+” is on view through February 23. The walls of the long front room are lined with life-size silk screens of her “Yentls,” a nod to Warhol’s “Elvises,” in red, blue and gray. The effect falls somewhere between a hall of mirrors and a shrine. Most of the canvases are vintage, but a few are new; Kass finally got around to finishing some extras the printer had originally made.

The Kasmin show comes on the heels of her first museum retrospective, which was well received at the Andy Warhol Museum in Pittsburgh last fall. One critic wrote that she “pays affectionate homage . . . to an art-world society with which she maintains a close bond, even as she castigates it for sins and omissions.” Another compared her to Virginia Woolf.

The daughter of a dentist whose passion was playing jazz sax, Kass grew up in Rockville Centre, Long Island, a bastion of upper-middle-class assimilated Jews. “It was boring, but I was never bored,” she says. When she was old enough, she would use her babysitting money to take the train to Manhattan and roam the Museum of Modern Art, where she noticed a dearth of female artists, but “it didn’t stop me from falling in love with Cézanne or Stella or Warhol,” she says. 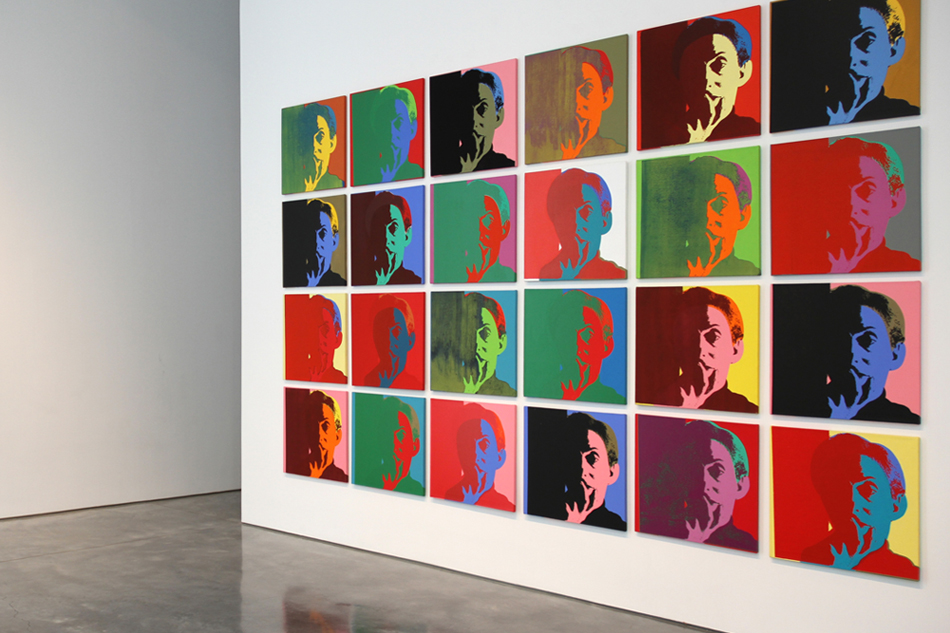 Portrait of the Artist as a Young Man, 1994, was the first piece in Kass’s “Warhol Project.” 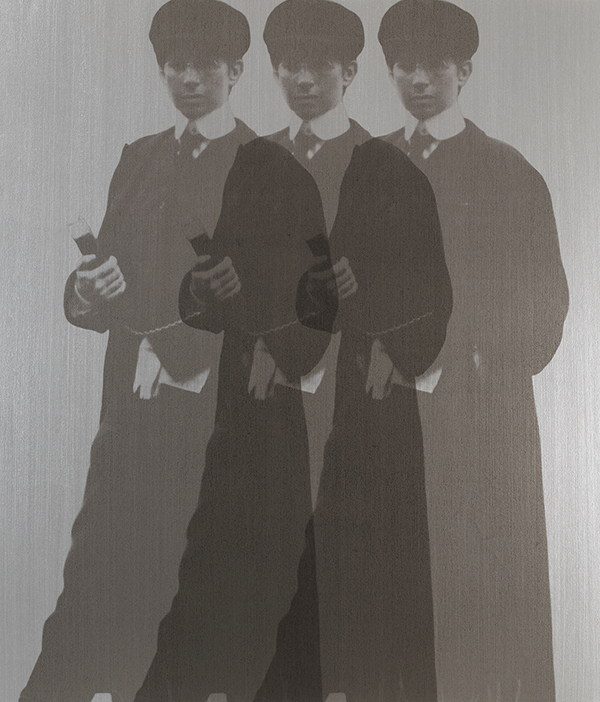 After attending the Whitney Museum Independent Study Program and earning a BFA at Carnegie Mellon University in 1974, Kass hightailed it back to New York, where she concentrated on expressionistic landscapes. “There was no shortage of women painters or women artists,” she recalls. “That’s what people were looking at. The zeitgeist was about feminism and women.” Elizabeth Murray, Pat Steir, Joan Snyder and Mary Heilmann were a few of her heroes.

Yet when the Reagan Era hit, as Kass sees it, women were shunted aside. “The eighties really obliterated women and painting,” she says. “I see less and less opportunity for women as the decades go by.” There are always exceptions — Kass cites Marlene Dumas, Lisa Yuskavage and Dana Schutz as three — but “the art world really changed and became about business. Business is about competition, in a different way.”

Kass responded with mash-ups of male-dominated art history, references to other female artists and her own imagery. Then came the “Warhol Project.” In 1991 she made Before and Happily Ever After, which paired Warhol’s painting of a woman pre- and post-nose job with a close-up of the prince placing the glass slipper on Cinderella’s foot. There were her “Barbras” in profile, which she dubbed “The Jewish Jackie Series,” as well as more self-portrait parodies, including “The Deb Suite,” a takeoff of Warhol’s Elizabeth Taylor series.

Kass’s work blends notions of gender, identity and sexuality, as in Altered Image #2, 1994-95, her self-portrait as Andy Warhol vamping as Marlene Dietrich in men’s clothing.

Kass was deeply influenced by Warhol himself — a gay Catholic who sought acceptance in the culture — as well as Cornel West, Elaine Showalter and other theorists in black and feminist studies. “I thought Jewishness belonged in the discourse of multiculturalism,” she says. “Barbra was a celebration. I was tired of talking about my absence. I wanted to talk about my presence.” That her work, aimed at heralding women’s contributions, relies to a large extent on those of men does not bother her. She sees no need to downplay the men in order to give the women a shout-out. The men she references “deserve to be on pedestals. These are artists I love,” she says. The problem is not their inclusion in the canon but rather what she calls the “omissions.”

About a decade ago, Kass began “Feel Good Paintings For Feel Bad Times,” text-centric, graphically rendered canvases that play her emotions and politics off her love of popular culture, particularly Broadway. Works include Oh God I Need This Show (which references A Chorus Line), If I Were a Wealthy Man (Fiddler on the Roof), Nobody Puts Baby in a Corner (Dirty Dancing) and Sing Out Louise (Gypsy).

The musical Gypsy and its lyricist, Stephen Sondheim, are two more obsessions for Kass. She considers any revival of Gypsy a must-see, comparing it to a new production of Tosca for an opera fan. “You want to see every Mama,” she explains. “You have to.” Kass is downright giddy revealing that Sondheim owns one of her “Barbras” and that he wrote her a gracious letter in reply to an exhibition invitation she sent him. 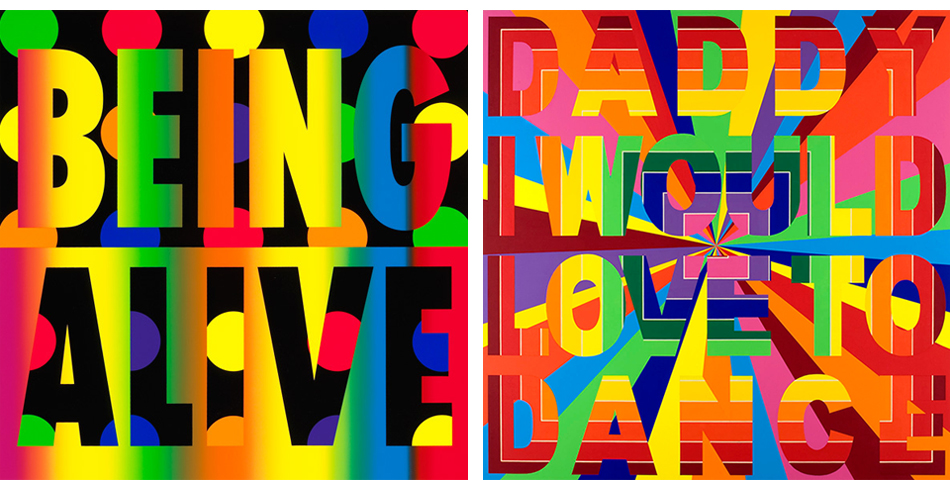 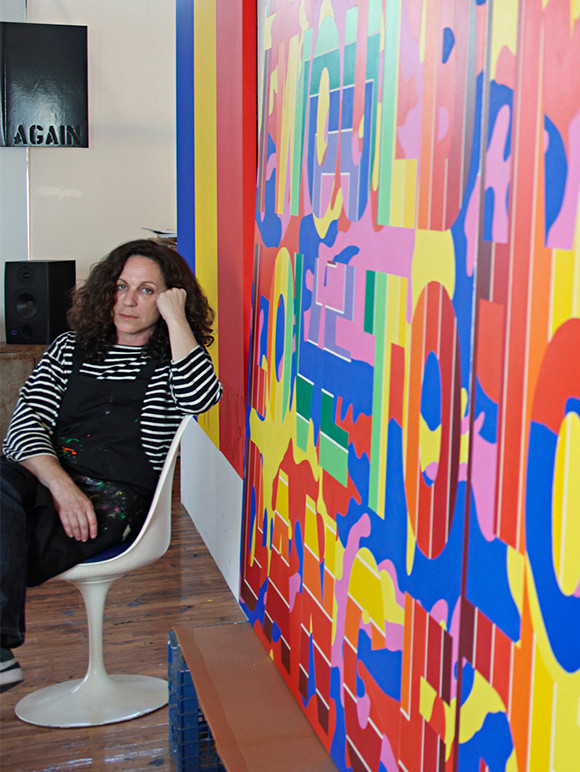 “To make something that was accessible and complicated at the same time was always the goal,” says Kass.

But no, Kass volunteers before being asked, she has never met or heard from her primary muse, despite regularly sending Streisand catalogues filled with her image. Twenty years ago, Kass says, she was scared to meet her idol, but now, at 60, she’s feistier — and a little miffed at being ignored. Still, Kass won’t grovel. “I need to be called,” she says with slightly faux indignation. “I need to be summoned.” She breaks into a laugh. “Then I’m there.”

The pop culture references throughout Kass’s work are an instant touchpoint for most viewers. Kass describes that accessibility as “totally conscious. It’s part of the politics of my work, I would think. I have a real problem with mystification and art,” she adds. “I have a problem with bullshit. To make something that was accessible and complicated at the same time was always the goal.”

Nor does she make any apologies for the unabashedly personal nature of her art. “I am of the generation that said the personal is political. The political is fucking personal,” she says. “If you’re not represented, that’s personal, and that’s political.”

To that end, Kass married her longtime partner, artist Patricia Cronin, on July 24, 2011, the first day same-sex marriage was legal in New York State. Still, nothing irks her more than a review or feature labeling her a “Jewish lesbian” in the lede. “If ever there were an artist whose work was about the utter dissolution of boundaries,” she says, “it’s mine.”