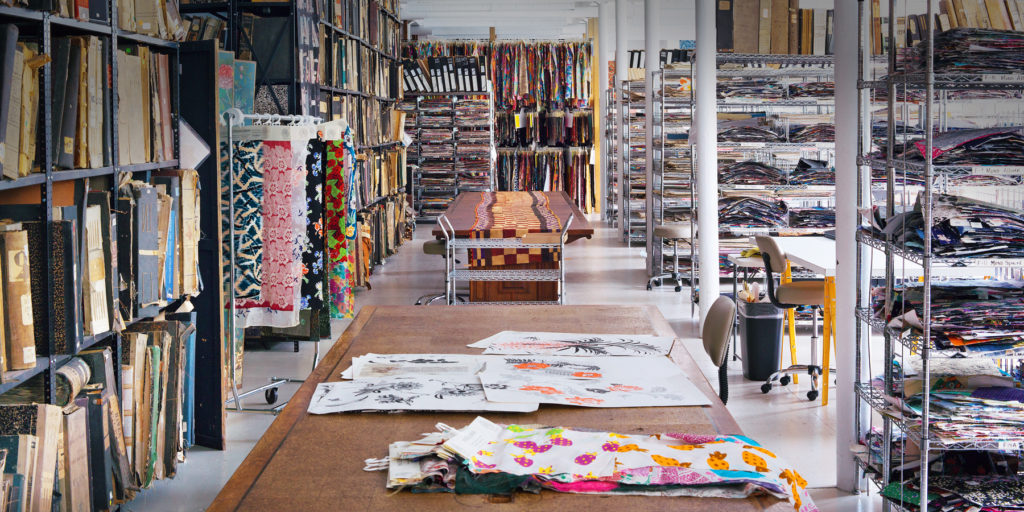 The Design Library — and the millions of fabric patterns it houses — are off-limits to the public. But a new book unlocks this vault of visual riches. 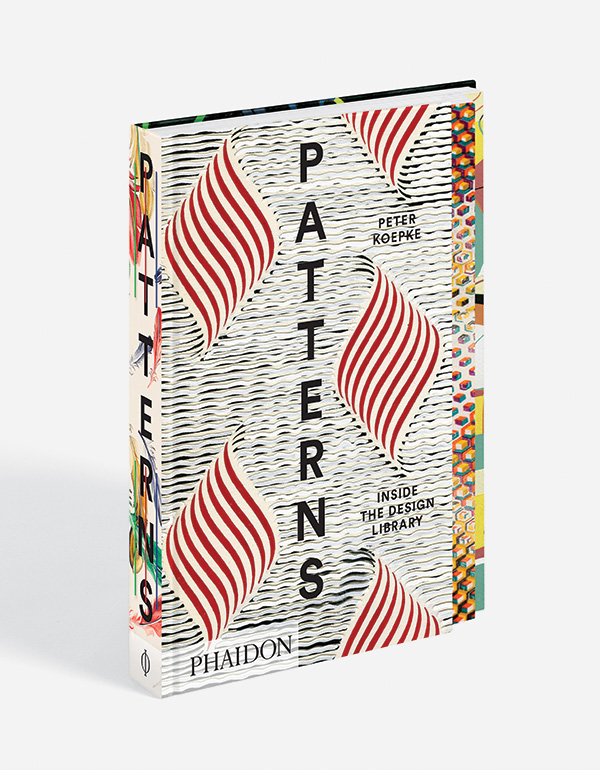 September 26, 2016Phaidon’s new book Patterns: Inside the Design Library offers an inside look at an Upstate New York repository of patterns and textiles spanning three centuries (image courtesy Documentary Designs, Inc. d/b/a the Design Library). Top: Open only to members of the design trade, the library contains some seven million samples. All photos by Mark Mahaney unless noted

Despite boasting one of the world’s most extensive archives of sumptuous decorative patterns, the Design Library occupies a building that, in stark contrast to what’s inside, is not much to look at.

Professionals passionate about textiles nonetheless make their way to the circa 1907 former mill, on whose light-filled second floor the company has its headquarters. Located in a hard-to-find industrial park in the Hudson River Valley, it sits just east of the mighty waterway itself, about 75 miles north of Manhattan.

Aficionados come here because the Design Library contains some seven million textile and pattern samples spanning 300 years. Most are of fabrics used for clothing and home furnishings, but they also encompass categories you wouldn’t imagine, like wrapping paper and tribal textiles.

“We’re the first-idea people,” says the Design Library’s owner, Peter Koepke. He means that his for-profit business exists so that inspiration-seeking creative professionals can purchase or license  the designs from its holdings of historic fabrics and patterns, which they then often modify for modern uses. Koepke’s clients include “everyone from Tom Ford to Target,” he says, not to mention Nike, Calvin Klein and Pottery Barn. “We never give a design to two people at the same time,” he adds.

Accessible to the trade only, the Design Library’s trove — collected over more than four decades — is off-limits to civilians. That is why the October publication of Patterns: Inside the Design Library (Phaidon) is such a big deal. It’s a small taste of the visual riches of the company’s archive — one that everyone can now savor — a golden ticket that gets the reader inside the vaults.

“Most people aren’t aware that the patterns they are wearing came from someplace in history,” says Koepke, who decided to do a book to help educate the public about design as well as to highlight the unique nature of his business. 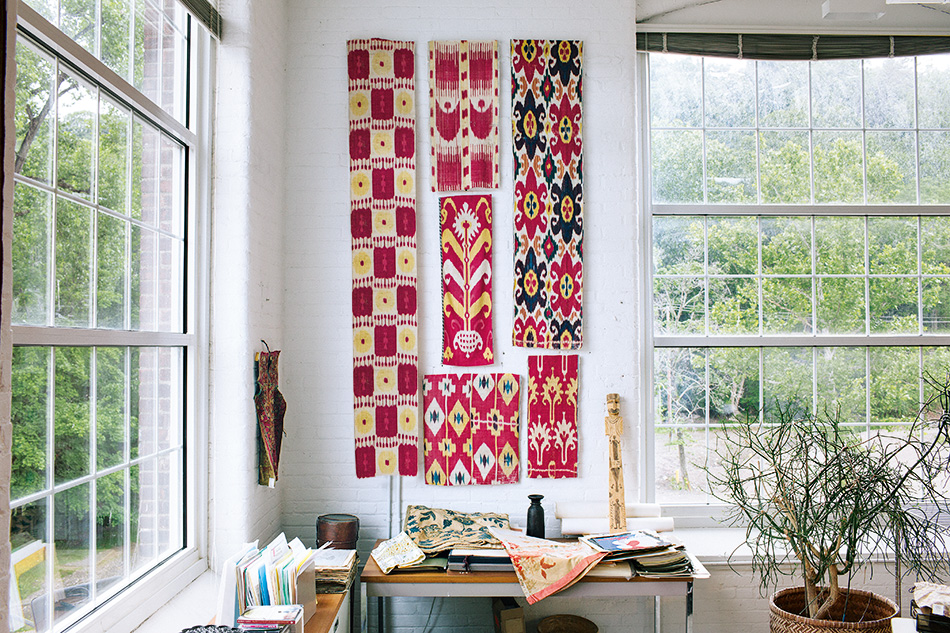 Set off against a white-painted brick wall at the company’s headquarters, woven 19th-century silk ikats from Uzbekistan hang over the desk of Design Library owner Peter Koepke. 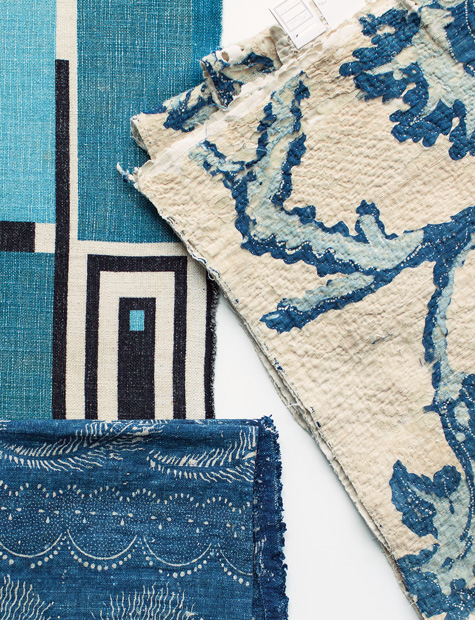 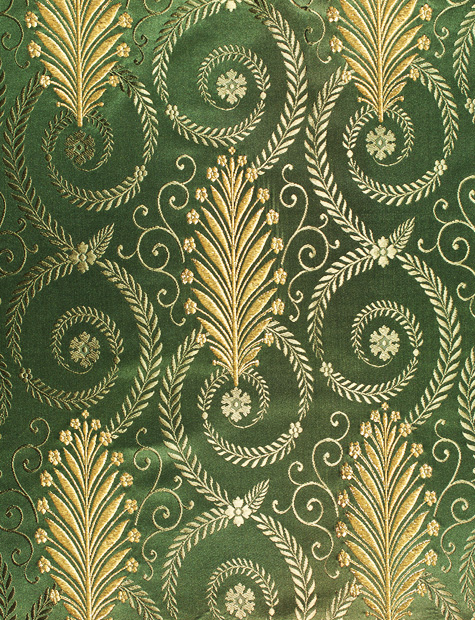 This woven French fabric from the mid to late 19th century appears in the section of the book devoted to textiles deemed “haute.” All following images in this slideshow courtesy Documentary Designs, Inc. d/b/a the Design Library 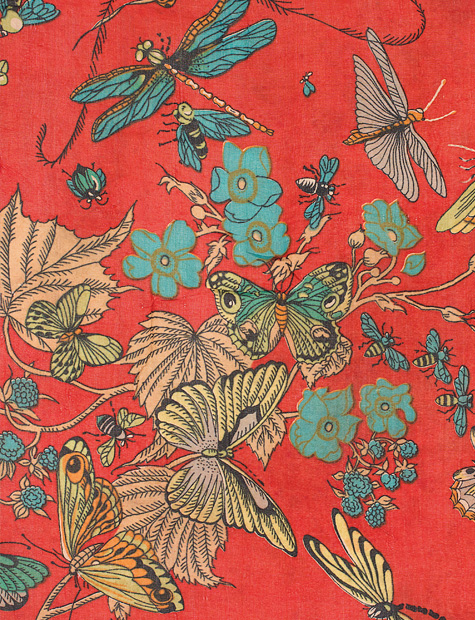 The “Insects” section includes this printed fabric made in France in the middle of the last century. 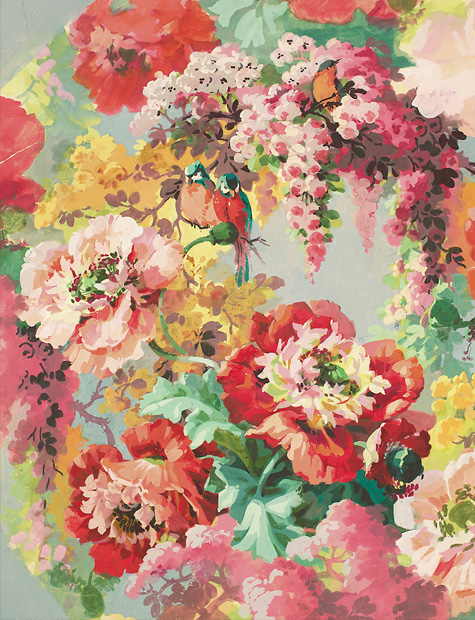 The pages of the book that celebrate romance feature another French sample, this one a hand-painted paper designed in the early 20th century by Studio Eugene Wolfsperger. 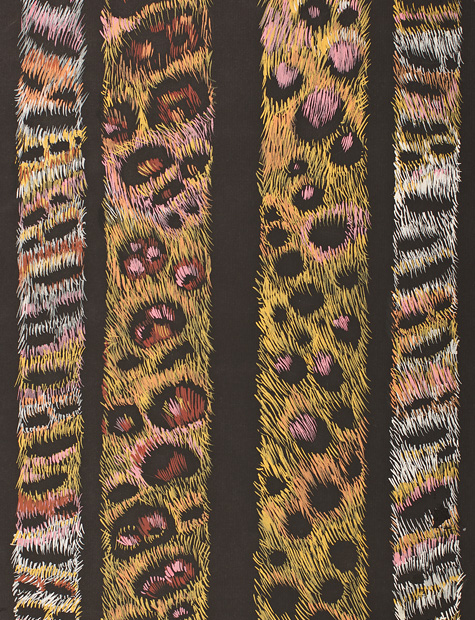 The “Skins” section showcases samples emblazoned with animal prints and patterns — such as this hand-painted late 20th-century French paper by Studio Michelle Berthet — as well as more abstracted designs only loosely based on mammalian pelts and reptilian scales. 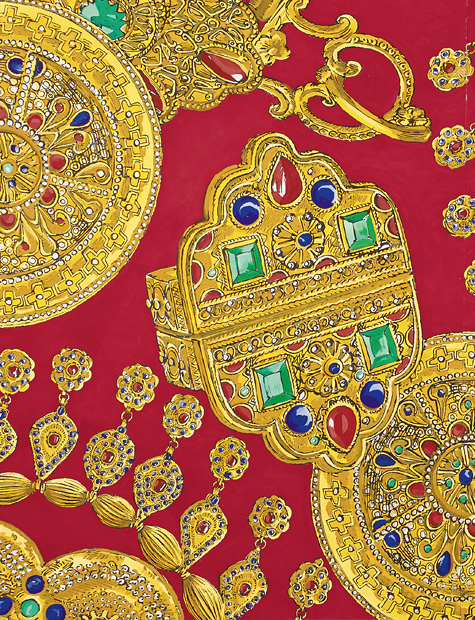 The book’s “Bling” portion sparkles with patterns inspired by gems and jewelry. Italy’s Studio Giorgio Taroni Disegni created this hand-painted paper toward the end of the last century.

Koepke wrote an introduction detailing his unusually large holdings — from 18th-century paper impressions by the French firm Oberkampf et Cie (one of the first modern print works) to 20th-century fashion collections from Christian Dior, Yves Saint Laurent, Balenciaga and the like. (For many of its modern samples, the Design Library owns the rights, though it does not convey copyrights as if it created the fabric; for many older pieces, like those from defunct mills, rights are not an issue.)

The bulk of the eye-popping volume (a thoughtfully designed object in itself) is devoted to colorful samples in an A-to-Z list of categories that are themselves fun to think about, from “Abstract” and “Bling” to “Yummy” and “Zig-Zag.” At the end, there’s an instructional section detailing how professional designers from companies like Clinique — which has used the samples to create prints for its cosmetics bags — turn the patterns into designs they can use. Francisco Costa, the creative director for women’s wear at Calvin Klein, tells how he took a 20th-century French velvet pattern from the Design Library and used it for the heralded dress Michelle Obama wore to the Nobel Peace Prize ceremony in Norway in 2009, when President Obama received the award.

Founded by Susan Meller — the author of Abram’s Textile Designs, a popular and still-in-print 1991 book that remains a go-to reference on the topic — and her late husband, Herb, the Design Library turns 44 this year. Koepke, a former dealer of South American art who for nearly two decades spent half of every year living in the Amazon, started with the company in 1990 as an employee, eventually purchasing it from the Mellers and moving it from Manhattan to the Hudson Valley. Today, he employs 11 full-time staffers, three of whom run the one branch office, in London, which holds a seasonally rotating selection of 65,000 patterns that are heavily in demand in the British market.

Koepke and his employees travel a lot, but much of their business is done in the company headquarters. “We just had a visit from the complete staff of the Costume Institute of the Metropolitan Museum of Art,” says Koepke, referring to one of the relatively rare purely educational meetings held at the Design Library. Despite the company’s name, it’s not an archive in the public trust.

The museum initiated the meeting because the institute’s curators had heard about the library’s holdings and wanted to have a peek for themselves. “I said to them, ‘First of all, let’s agree our missions are different,’ ” Koepke continues. “They want their pieces to be the same condition one thousand years from now. Our mission is to allow the pieces to get back out into the world.” 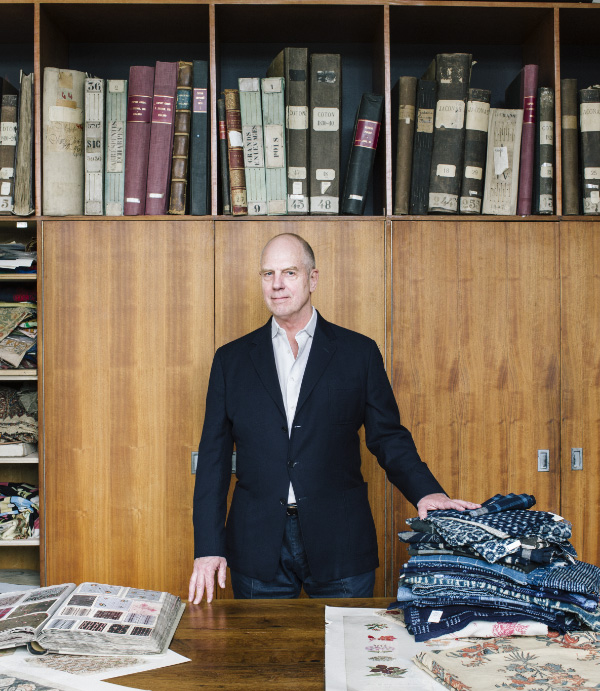 “Most people aren’t aware that the patterns they are wearing came from someplace in history,” says Koepke, who works with aesthetic arbiters from such major brands as Calvin Klein, Nike, Pottery Barn, Target and Tom Ford.

Koepke’s office is full of dusty old tomes, beautiful in their own right, many of which hold the records of textile mills in centuries past.

For every design produced, a swatch was pasted in the mill’s record book, and flipping the pages from, say, a circa 1840 French production line is like gorging on visual candy. Among other things, it’s a reminder that the 20th century didn’t invent the use of brazenly bold colors and patterns. Some of these 175-year-old designs are downright psychedelic.

Most of the Design Library’s patterns are held in manila folders, and perhaps the most fascinating aspect of the place is its organization: Koepke and his team have devised a kind of design Dewey Decimal System to allow them to help clients find what they’re looking for. The folders have long descriptive titles, such as YD 17: Stripes Cotton Sport Wide & Awning, as well as Monochromatic Allover Large & Medium 18th & 19th C.

Some 1,200 categories are represented in the system, which offers two main avenues into the collection: the beginner binders and the advanced binders. If people want to browse and aren’t sure what they’re looking for, the beginner binders steer them in a general direction, or several directions. In these books, large swatches become the starting point of what you might call a Choose Your Own Adventure fabric journey. “They’re the keyhole,” says Koepke. 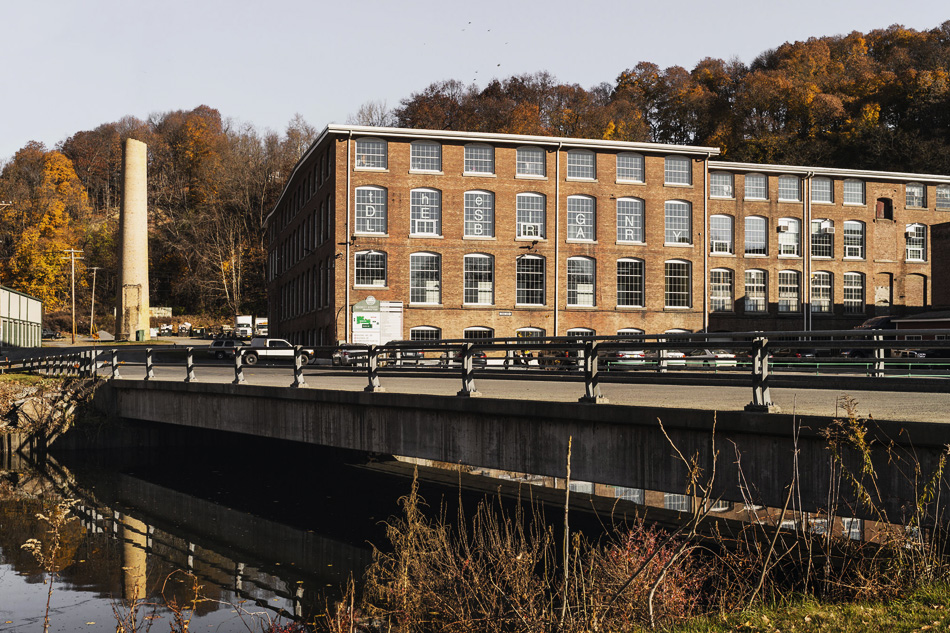 The Design Library occupies the second floor of an unassuming former mill in the Hudson River Valley town of Wappingers Falls, 75 miles north of Manhattan. Photos in this slideshow by Mark Mahaney 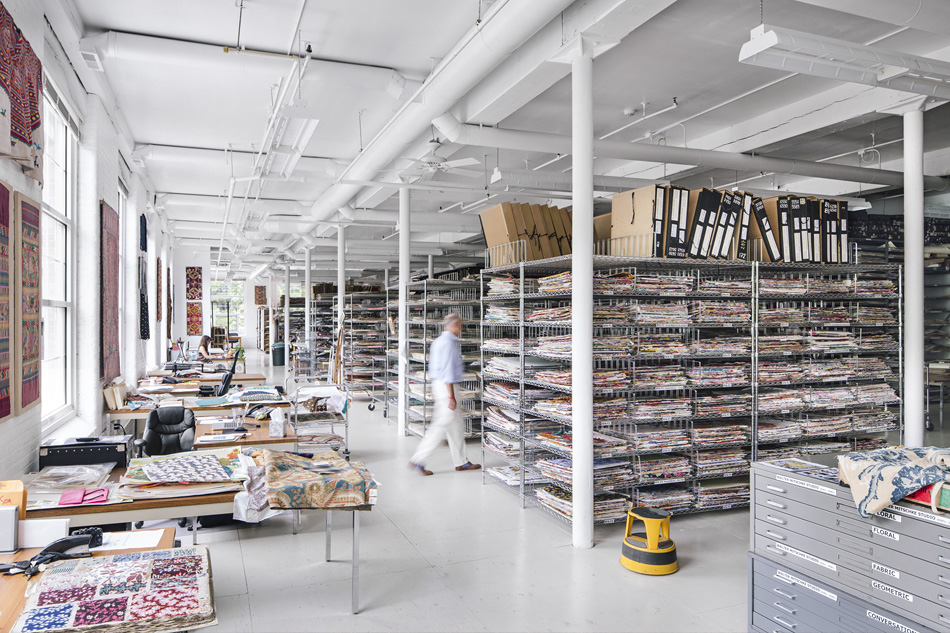 The library is spread over some 11,000 square feet of well-organized light-filled space. 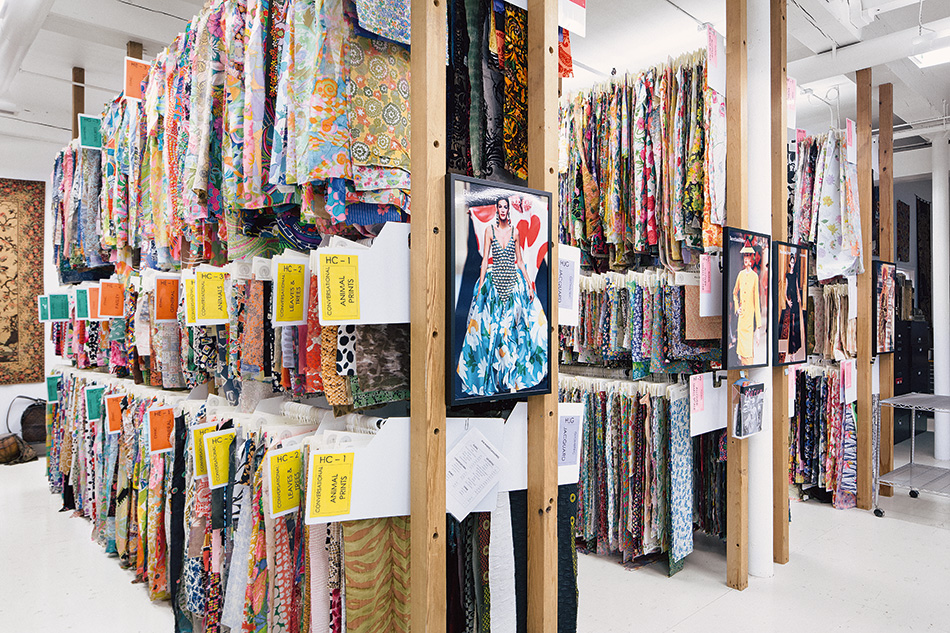 A Dewy Decimal–style cataloging system apportions the samples into categories like “Animal Print” and “Leaves & Trees.” This area of the library contains thousands of examples acquired from French fabric house Bianchini-Férier. 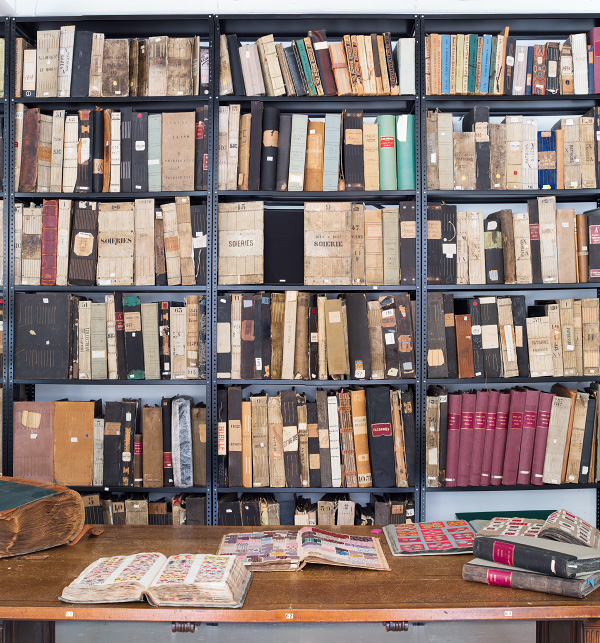 On the Design Library’s east wall are shelves containing books full of swatches and original drawings for textile patterns from the early 1800s through the late 1900s.

Many who come here, however, are on a highly targeted mission. These usually start with the advanced binders, which break the holdings down more granularly. “Most people know exactly what they’re looking for and have already sent us a brief,” says Koepke. “We can find them something in under a minute, and it’s totally analog.”

You read that correctly: In this era of instant online searching, here is one place where your fingers have to do the walking. (The library also offers an online subscription service called Kosmos, which gives subscribers access 24/7 to a digital pool of nearly 20,000 designs that is  added to monthly.) Clients can borrow the physical objects or scan them and then deal with the scans as they please; the Design Library doesn’t modify patterns itself and has no claim on future royalties.

Despite having millions of patterns on hand, Koepke is actively buying more samples, especially contemporary work but also increasingly rare antique examples, if he can find them. “I have thirty spies all over the world,” says Koepke. “When they know of something, hopefully I get to hear about it first.” He’s heartened that paisleys and Art Deco patterns are back in vogue after a long spell out of fashion, and he’s tickled that the old Oberkampf et Cie designs are gaining new relevance for clients.

By informing people that there’s a buyer out there for their old volumes of swatches, the publication of Patterns will, perhaps, bring even more designs and samples into Koepke’s swelling store of stuffed manila folders. But even if he never finds another textile mill record again, the Design Library has plenty of choices to feast on.