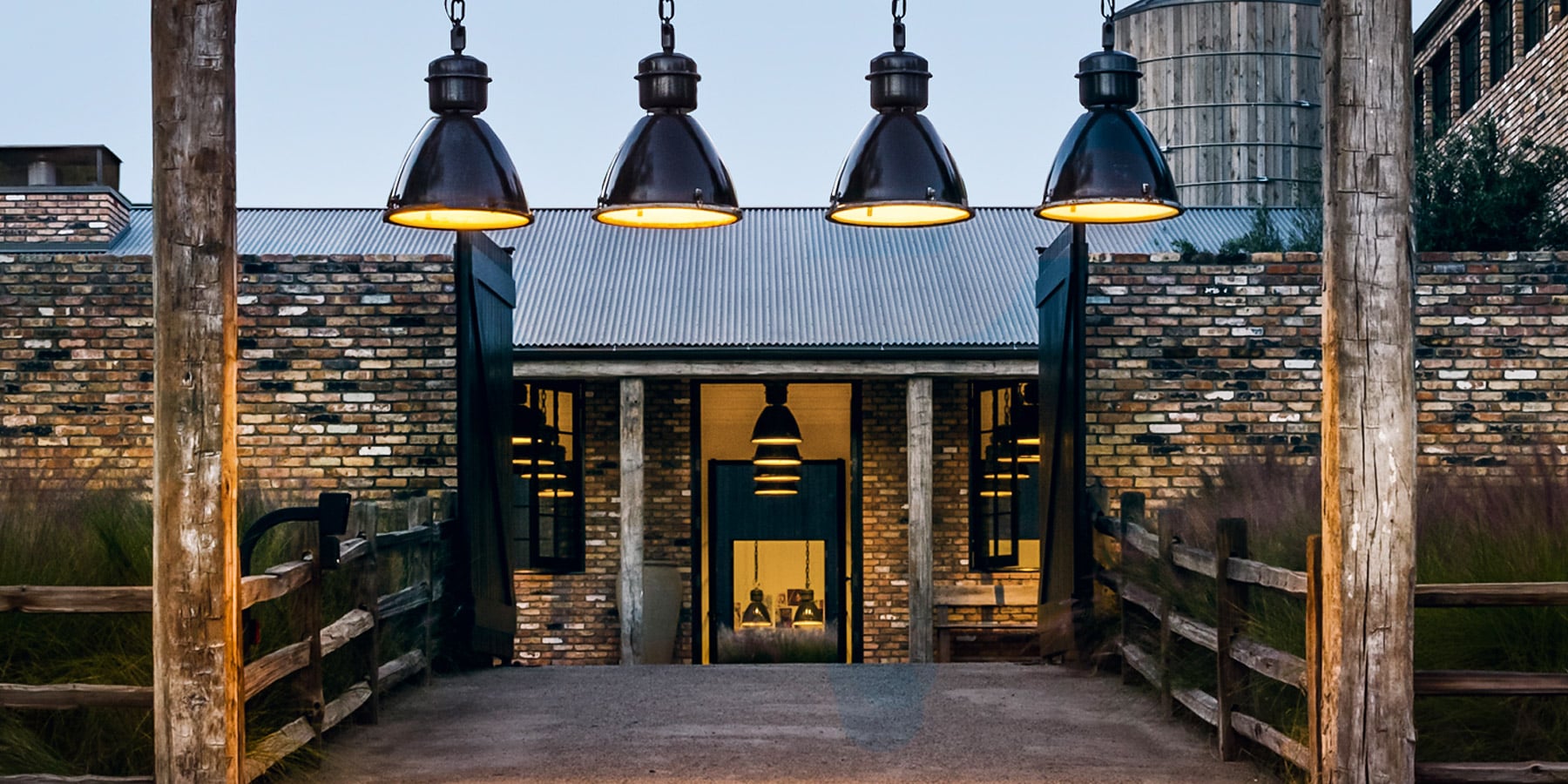 The Academy Award–winning actress and design maven tells us how she turned to the image-collecting site for inspiration in planning her new house. 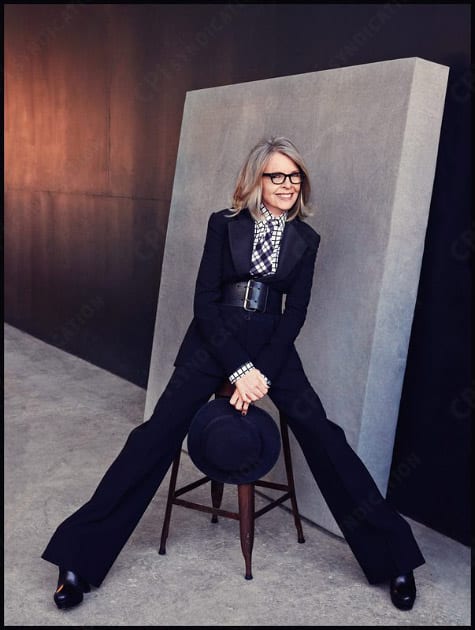 I’ve been a tear-sheet person all my life,” says Diane Keaton, a serial renovator who has bought and sold more than a dozen houses in the past three decades. But her life changed about five years ago when her friend Nancy Meyers, who directed Keaton in Something’s Gotta Give, told her to take a look at Pinterest. “ ‘Pinterest? What’s that?’ ” Keaton remembers asking. “’Just check it out,’ ” Meyers replied. At a page called Le Style Studio, Keaton found 158 pins devoted to doors. “In less than the instant it took to click … I was hooked,” she writes in her new book, The House That Pinterest Built (Rizzoli).

Keaton’s newfound devotion to Pinterest coincided with her decision to build a house — for the first time in her life —from the ground up, on a site she owned in Brentwood. So, she writes, she began pinning ideas, never doubting that the “thousands upon thousands of inspirational photographs would easily morph into a three-dimensional standing structure that would shelter human beings, specifically my family and me. Never.”

While being interviewed by phone for Introspective, Keaton was walking around her kitchen, library and living room. I asked her what surprised her most about the finished house. “The surprise is that when you walk barefoot on the brick, it feels good,” she says. “I like being barefoot, and I like the texture created by the spacing of the bricks. I like feeling the substances the house is made of.” 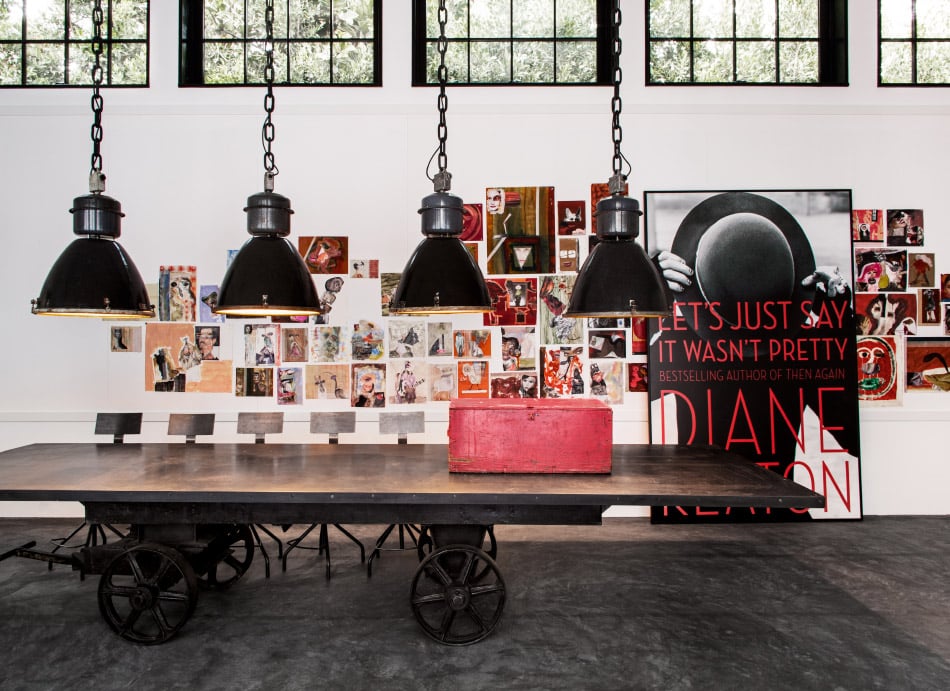 “Before plunging into the ‘office’ images from Pinterest, I had to think about what I wanted, or rather what I needed, yes, that was it, what I needed to make my new office more effective,” Keaton writes. Photo by Lisa Romerein

More than half the book is filled with photos Keaton found on Pinterest. But the last 100 or so pages are devoted to shots of the finished house, which, Keaton says, took 1,278 days to build and required some 75,000 bricks. Nestled among the photos are essays by Keaton, a gifted writer who, at one point, describes how the needs of her daughter, Dexter, and son, Duke, informed the design of the house. Duke, she says, is a hoarder, requiring lots of storage for his collections, in both his own room and a nearby guest room. Dexter is away at school. “With mountains of pillows and tons of space in her bathroom for lipstick and shampoo and perfume and nail polish and a blue painted wall to remind her of Maui, her favorite place in the world, and a great shower, surely she’ll want to come home more often,” Keaton writes. 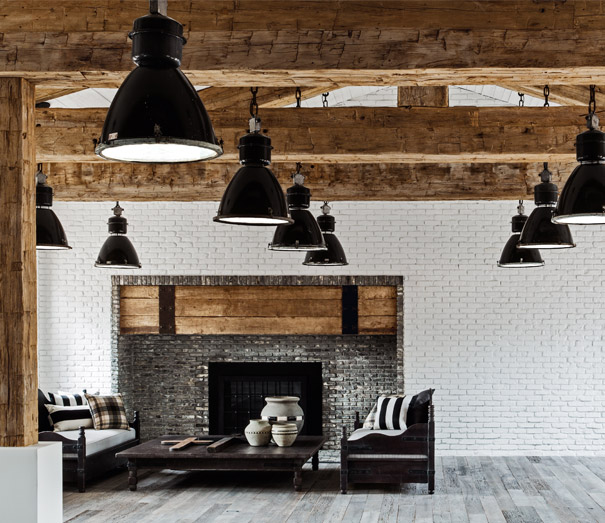 Keaton writes that she had trouble conceptualizing the living room, which has always been her “least favorite room.” So, she took to Pinterest and was inspired by the Long Room of Trinity College Library, in Dublin, built in 1732. Rows of industrial-style enamel pendant lights hang from the vaulted ceiling. Photo by Lisa Romerein

Keaton knows design, and some of the images she pinned were of buildings by architects Tom Kundig, Lake/Flato, Annabelle Selldorf, and Howard Backen. “There are so many great architects out there,” she says. But she didn’t turn to any of them. Why not? “I admire them from afar. But if I hire one of them, where am I then? I’d have to follow orders from headquarters. No interest at all.”

Besides, Keaton knew what she wanted. The overall look would be industrial/farmhouse. She recalls that her mother used to read her “The Three Little Pigs,” and she knew she would someday live in the one kind of house that the Big Bad Wolf couldn’t blow down. That explains her love of brick. As for galvanized metal, she notes that for the first few years of her life, her family lived in a Quonset hut. Its galvanized surface came to symbolize home. 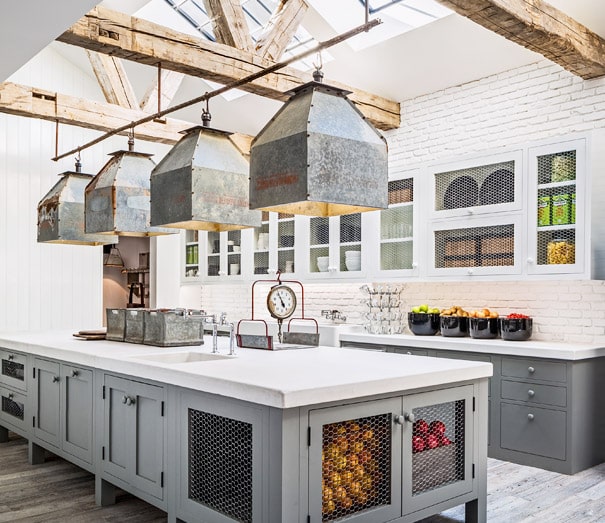 Keaton refers to the kitchen as “the heartbeat” of the house, and she wanted hers to reflect the differing play of light throughout the day. “I wanted to open my eyes to more ever changing shadows and light passing through a kitchen where clouds can’t be blocked and reflections can’t be hidden.” Photo by Lisa Romerein

At the core of the new house would be a 1,000-square-foot kitchen. But what form would it take? On Pinterest, she was struck by a photo of a kitchen with “reclaimed wood beams thrusting themselves out from under skylit steel casement windows,” she writes. “At the left was a small door that opened to a pantry, or so I thought. In the foreground, stretching across the width of the kitchen, was my favorite object: a long table with chairs resting underneath the trusses.” But the photo left a lot to the imagination, which meant many more hours searching online. “I knew this was a half-assed way to create a kitchen, much less the heartbeat of a home, but I loved every stolen moment, and every excuse to amass new pins.”

She had at least as many ideas for bathrooms, which she presents in the book as a series of lessons learned during her 70-plus years. For example, she writes that given the harshness of most bathroom lighting, “[d]immers are a saving grace. The more the better. It is always wise to add a couple of linen-covered sconce lights, placed approximately three feet apart and slightly above eye level, to enhance the natural glow on your face.” And so on. 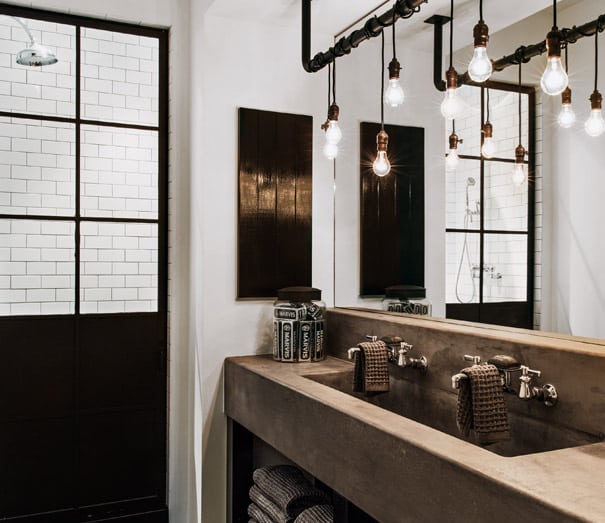 “Men shave in close up. Women apply their makeup in extreme close up. This means one thing: mirrors in bathrooms have to be flattering,” Keaton writes. Photo by Lisa Romerein

As Keaton freely concedes, she had too many ideas. So, she brought in Cynthia Carlson and Toben Windahl, of Cynthia Carlson Associates, to help her focus. Windahl patiently created computer renderings. But the rendering program, Keaton writes, was “almost as addictive as Pinterest. After several months, we finally arrived at our first rendering of the house. I stress the word first. Months became more months. After six of them, we finished the exterior, only to arrive at the interior, a much more daunting process. A year came and went, and we hadn’t even broken ground.”

She invited architect David Takacs to join the team, followed by interior designer Stephen Shadley, a longtime collaborator and friend. Keaton says that she had a hard time envisioning complex details in three dimensions, so to move things along, Shadley would say, “Let’s mock it up.” Workers would build a full-size model, and she’d know what she was going to get. Keaton considers the team of designers, as well as the artisans and builders who worked on the house, her cocreators. “I was one of the participants,” she says. “No one, including me, is the author of the house. We all explored together.” She praises the team for what it accomplished “in spite of a constant influx of photographs that had to be considered and pondered in deference to the owner’s obsession.” 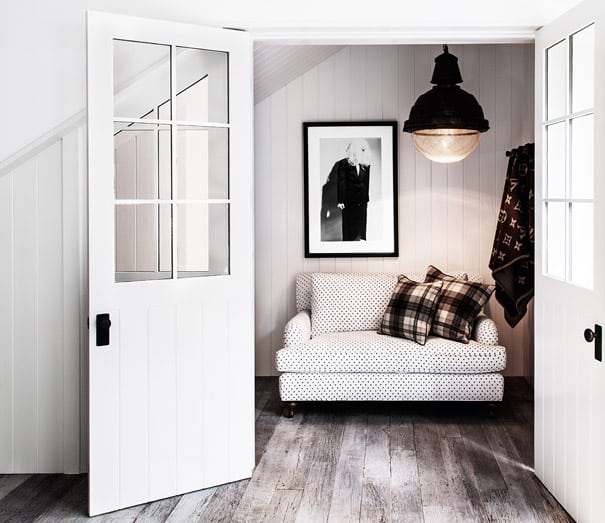 “I still believe bedrooms like every other room should reflect the simple-is-as-simple-does life. I wanted a down home dream home unencumbered with fancy,” Keaton writes. Photo by Lisa Romerein

The hardest time for her, Keaton says, was when she was in Italy shooting HBO’s “The Young Pope,” which kept her away from the construction site for months. Now that she’s moved in, she sees some flaws, including a library that isn’t well proportioned. Its dimensions, she says, make it “hard to just grab a book.” Is it her fault, or Pinterest’s?

Keaton is willing to take the blame. She writes that her house is “made from the gifts of other people’s addictive yearnings for the perfect home. It illustrates my choices of your choices. You might think: ‘Hey that’s my kitchen. She copied my kitchen.’ ” 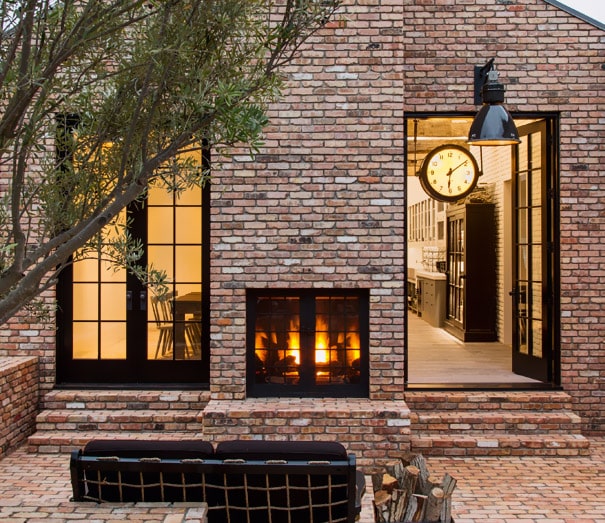 Conserving water and respecting the environment were top of mind when Keaton was considering the landscaping. “By also adding a walled in brick patio, as well as D.G. [decomposed granite] paths, and an area designated for deer grass I was confident I could hold my environmentally responsible head up high if I ever have the great opportunity to meet Governor Brown,” she writes. Photo by Lisa Romerein

It helps that Keaton has a sense of humor. The book includes comments from neighbors and passersby who are confused by the house’s windowless street facade and wonder what’s behind it. Some think it’s a museum, others a winery. “I’m flattered,” says Keaton, explaining that if she had wanted a standard-issue house, “I would have bought one.”

Inspired by Diane Keaton’s home? Take a note from the actress and start compiling mood boards for your own dream house with items sourced from 1stdibs. Get started with these key pieces. 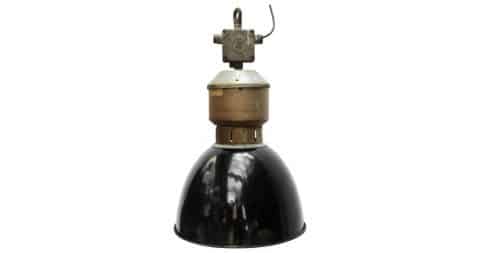 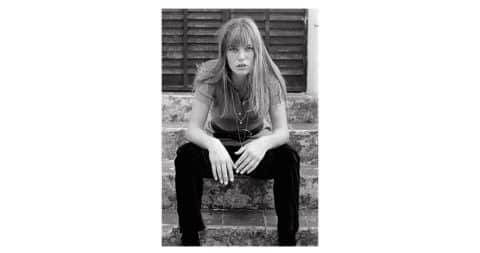 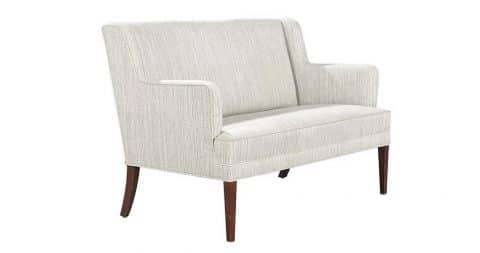 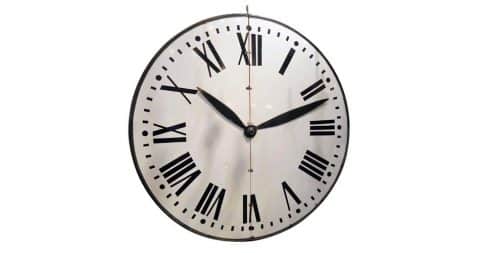 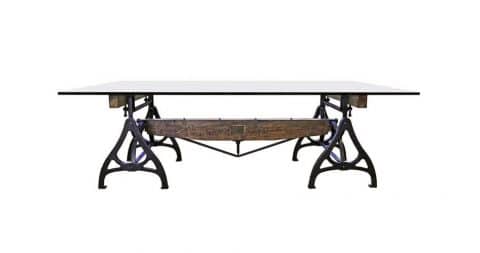 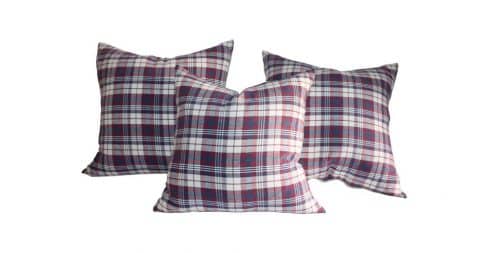 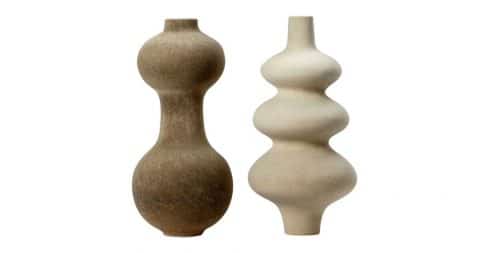