Meet a Modernist Architect Who Really Understands What His Clients Want 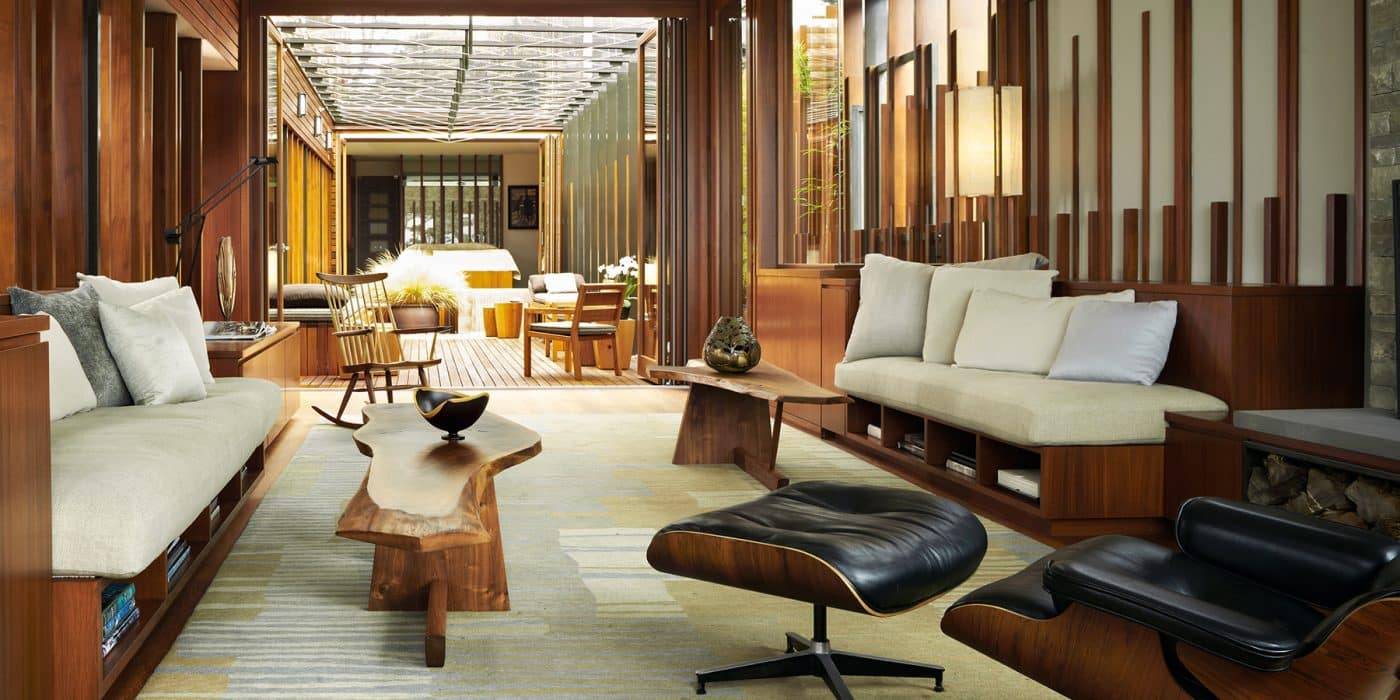 Working from his studios in Chicago and New York City, Dirk Denison designs residences that are uniquely tailored to the individuals who call them home. 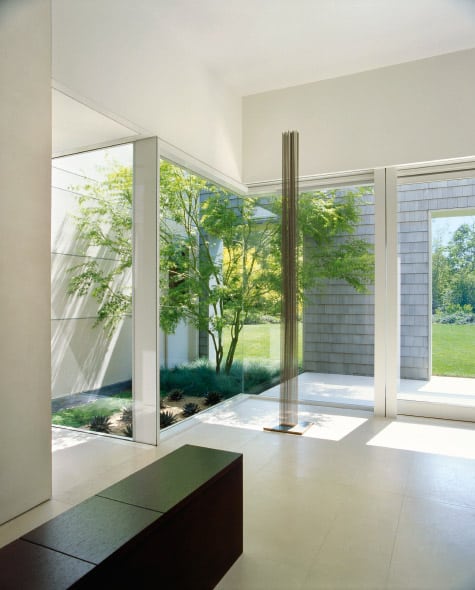 October 21, 2018The elegant houses of Chicago- and New York—based architect Dirk Denison are as smartly designed as they are sensitive to their clients’ needs. Above: A minimalist but layered space in a home in California’s Marin County features a Harry Bertoia sculpture (photo by Joshua McHugh). Top: The living room of an ingeniously compact Carmel, California, home is outfitted with furnishings by Charles and Ray Eames and George Nakashima (photo by David Matheson).

In 2008, a magazine asked me to write about a new house in Marin County, California. The architect, Dirk Denison, was in Africa, so I went to see the residence without him. It reminded me of the Farnsworth House — Mies van der Rohe’s Plano, Illinois, tour de force — turned inside out. Here, a glass box enclosed not the residence itself but a courtyard at its center. Clearly, Denison owed a debt to Mies. But the real inspiration, I learned, was the clients’ son, Max, who was born with cerebral palsy and moves from room to room by crawling on the floor. Max needed a house that was entirely barrier-free. Denison avoided even the slightest level change, varying the heights of rooms by adjusting their ceilings, and provided built-in furniture that was stable enough for Max to pull himself up onto. Mies’s idea of universal space and Max’s need for universal access came together in an extraordinarily elegant building.

A few years later, writing a story for another magazine about small houses, I interviewed Kathy and Gary Bang, retirees who had decided to downsize. Really downsize: Kathy told me that when she and Gary, who had both lost their previous spouses, got together, they owned four residences that added up to 15,000 square feet on 150 acres. Now, they were living in a single 1,800-square-foot home on a 10th of an acre. 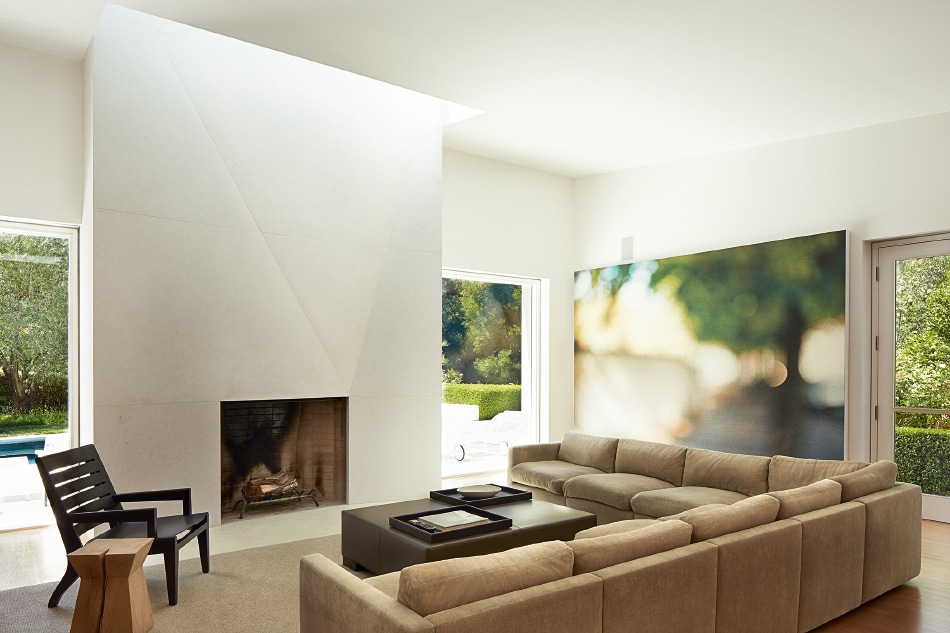 Denison designed the Marin Country house to accommodate the needs of a couple whose son, Max, has cerebral palsy, creating it without any barriers or level changes, which allows him to move freely from room to room. Photo by David Matheson

The structure was in Carmel, California, the seaside enclave where they decided to live full-time. But zoning regulations prevented them from enlarging their existing home there by even an inch. And so, they hired Denison to build them a much better house within the outline of the old one. Kathy described one of Denison’s many inventions: a meditation room that doubles as a guest room, with mattresses stowed beneath tatami mats. “The house is perfect for us,” she said. “It’s not a lot of space, but it’s the right space.”

Eventually, I got to know Denison, and he started telling me about his early influences. We’re the same age, and we both grew up wanting to be architects. Somehow, he realized that ambition, while I didn’t. My career as an architecture writer gives me a front row seat to what architects do. But it’s not the same as doing it.

Meet a Modernist Architect Who Really Understands What His Clients Want 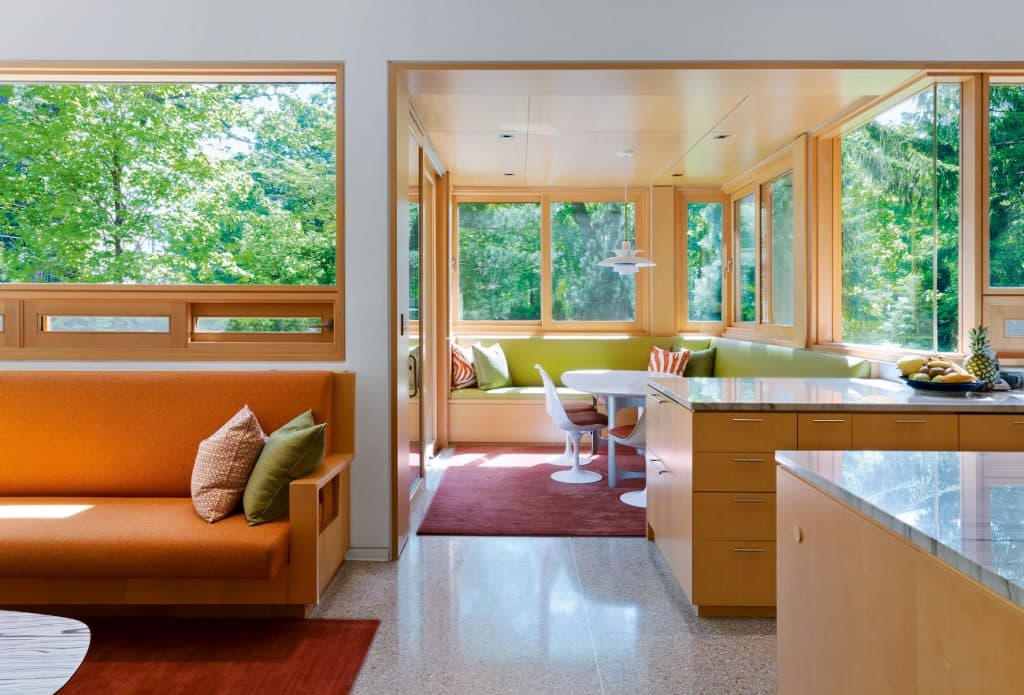 The kitchen of a house Denison designed in Wilmette, Illinois, a suburb north of Chicago, features walls of glass and Eero Saarinen chairs set at a custom table by Denison’s firm.  Photo by Michelle Litvin Studio 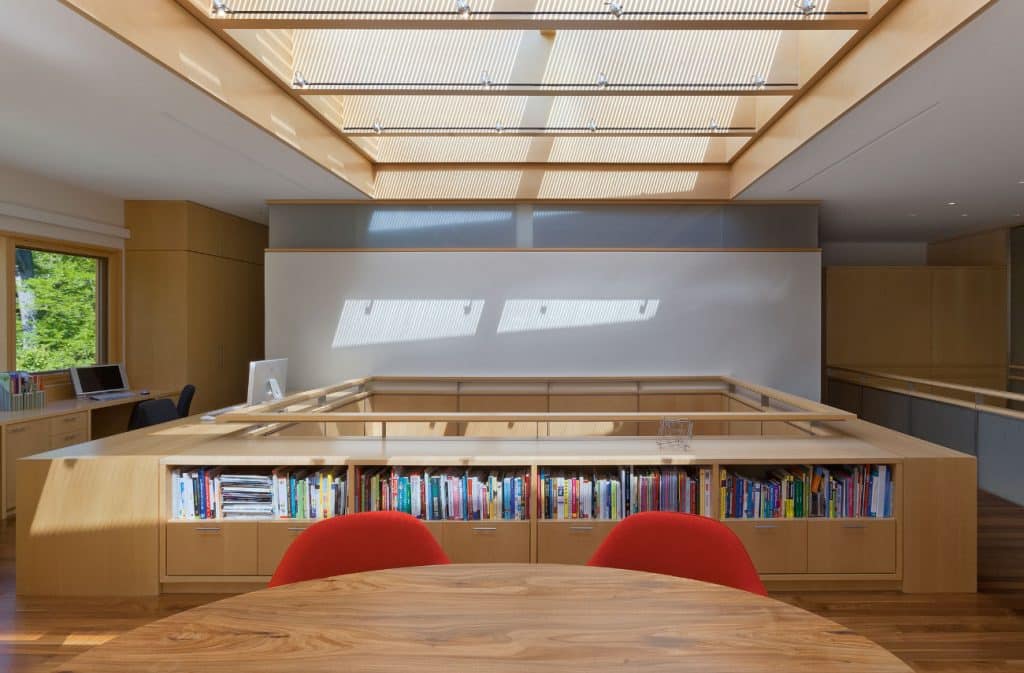 “The clients have three small children, and the wife is particularly committed to education,” Denison says of the Wilmette project in his new book. “From the very beginning, she spoke about wanting a space where all five family members would have individual desks as well as a shared table for projects. That really drove the idea of the skylit upstairs space in the middle of the house, which serves as a multi-generational home office.” Photo by Michelle Litvin Studio 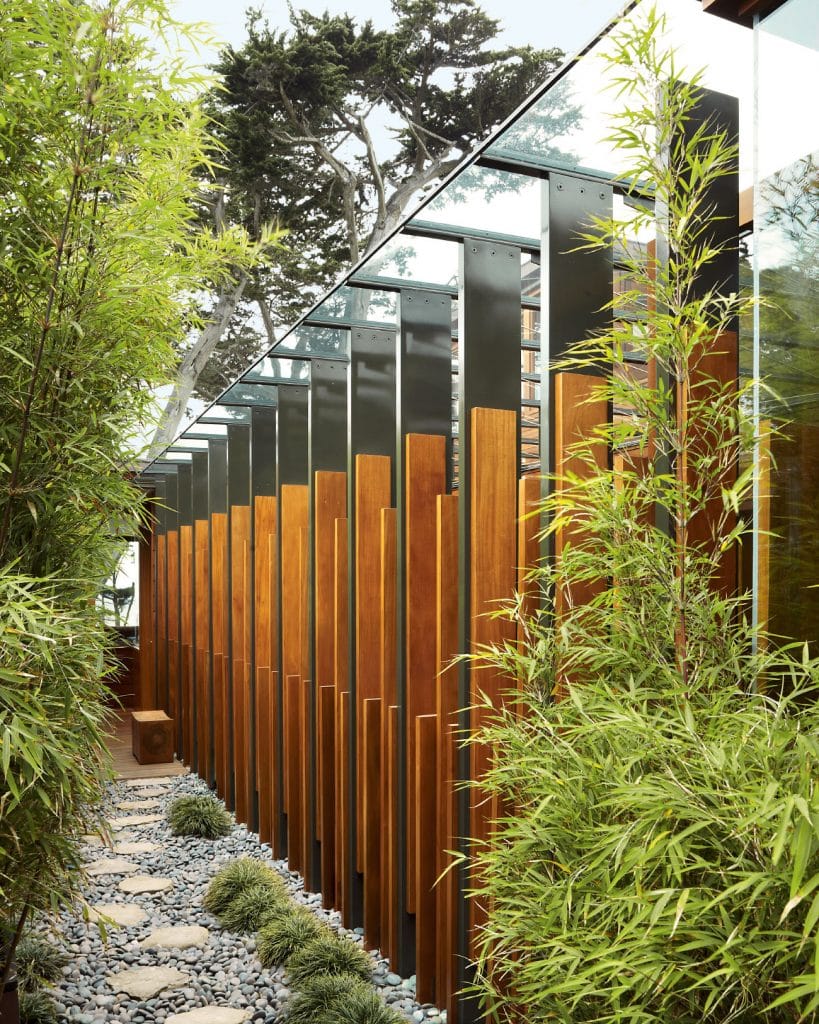 For the house in Carmel, California, Denison created a vertical-slatted screening mechanism that would filter sunlight entering the building. Photo David Matheson 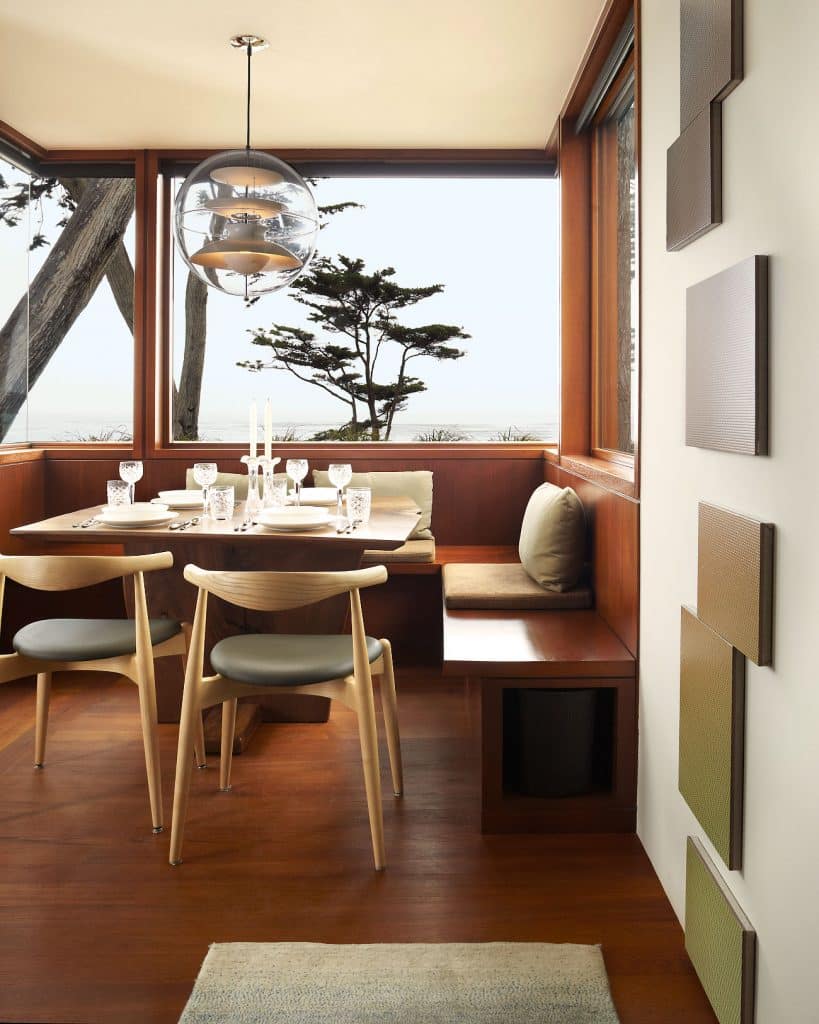 In the breakfast nook of the house in Carmel, Hans Wegner Wishbone chairs sit at the dining table, which is bordered on two sides by a built-in wooden banquette. Photo David Matheson 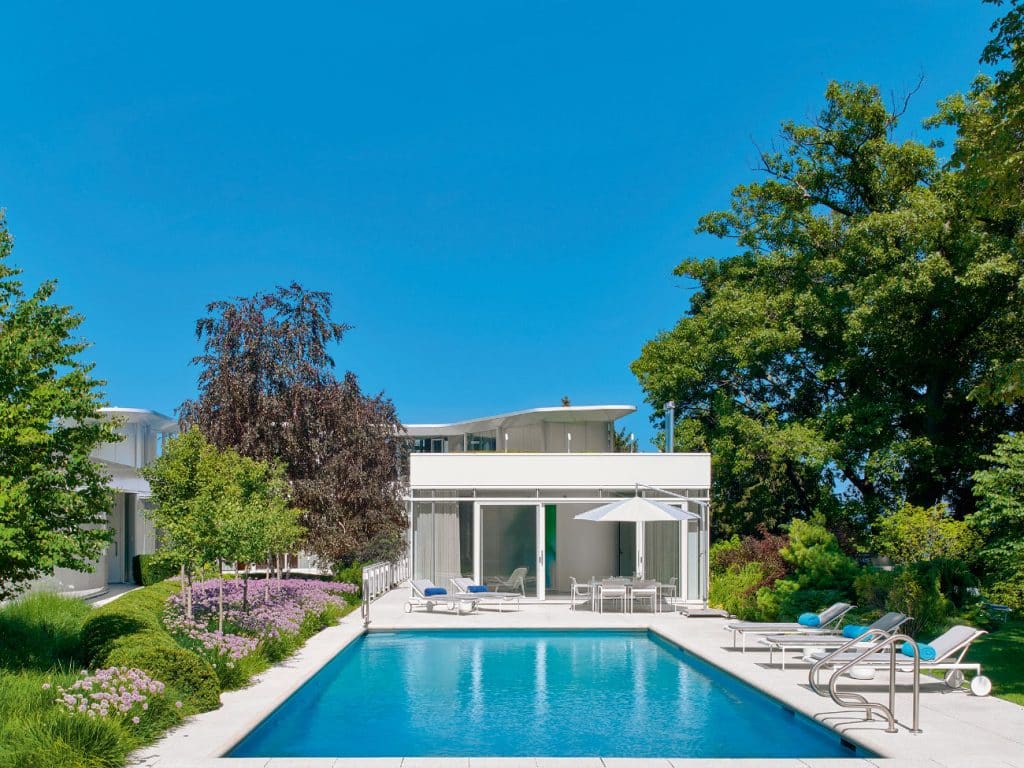 The pool and pool house of a property Denison designed on Lake Michigan, in the Chicago suburb of Winnetka, Illinois. Photo by Eric Laignel 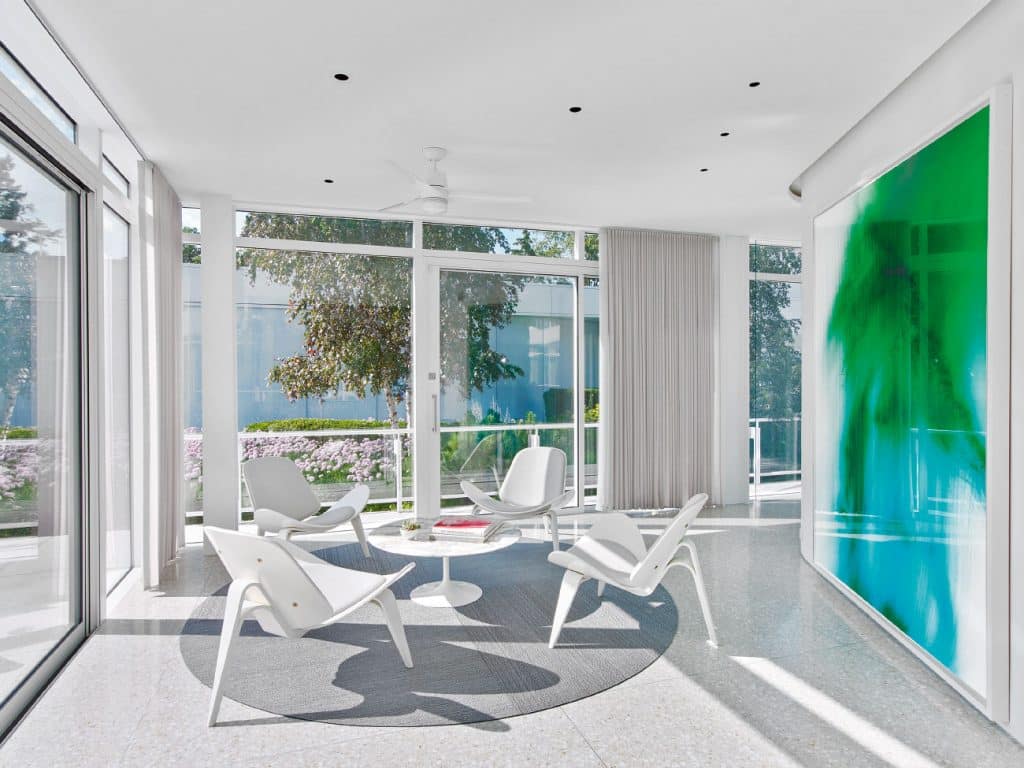 Sunlight floods through floor-to-ceiling windows into the pool house of the Lake Michigan property. The artwork is Wolfgang Tillmans‘s Freischwimmer 132, 2009, and the seats are Carl Hansen CH-07 Shell chairs. Photo by Eric Laignel 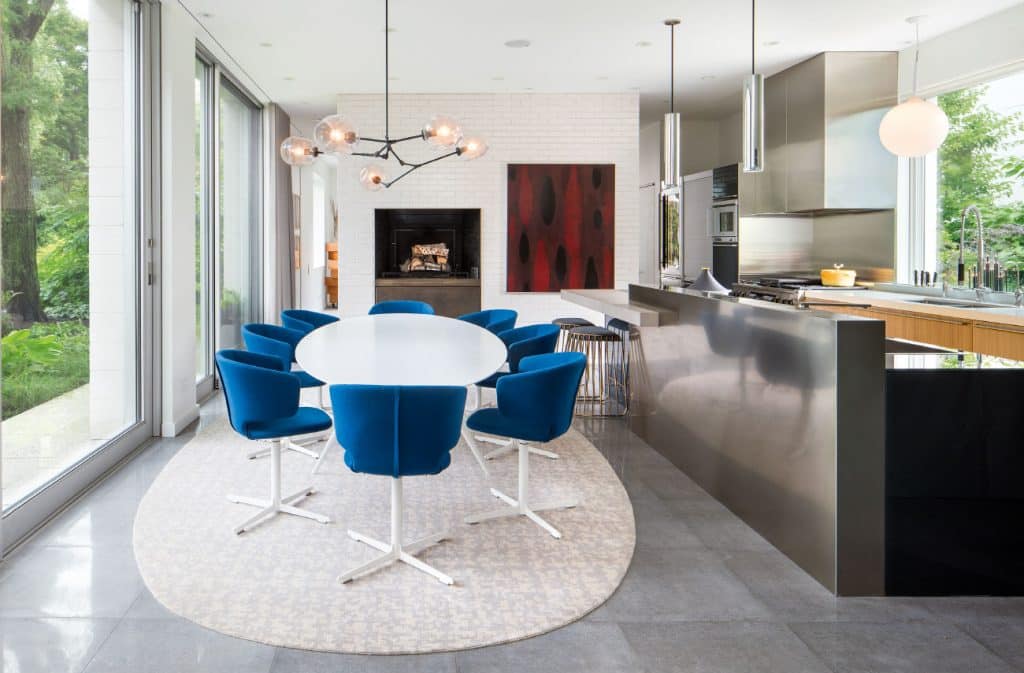 In the kitchen of a house in Chicago’s Bucktown, a chandelier by Lindsey Adelman hangs over an Alias table  surrounded by chairs from the same maker. Photo by Tom Rossite 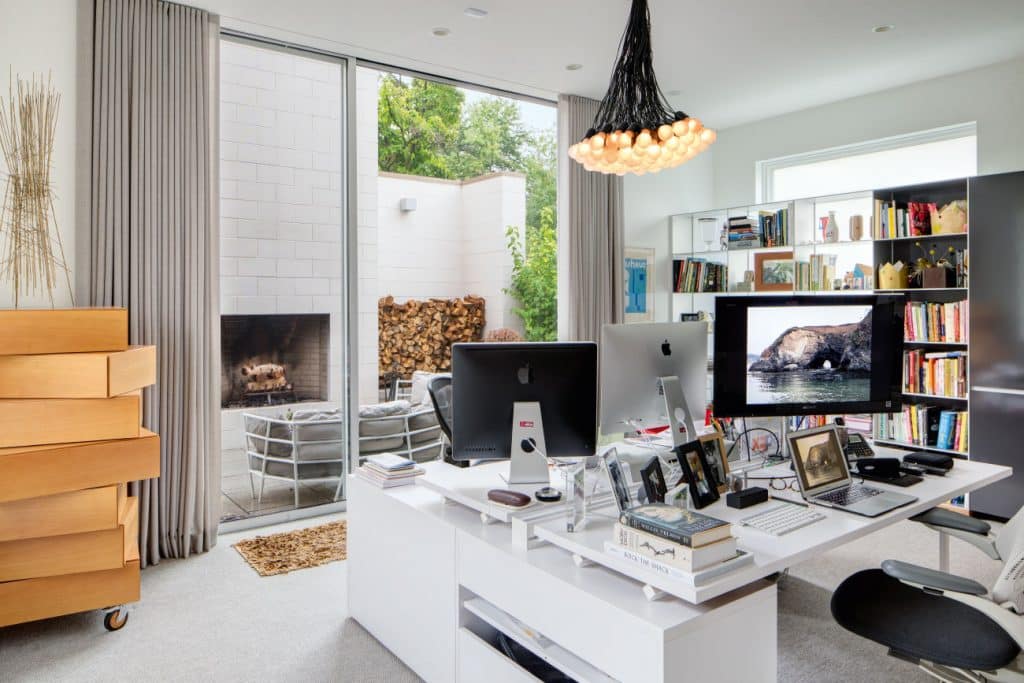 Denison’s work on the Bucktown house — which was an expansion of a building designed by Harry Weese in the 1970s — included the addition of a home office. Photo by Tom Rossite

What made it possible for Denison to follow his dream? One answer is that he grew up in Michigan surrounded by architects. I loved looking at architecture — when Paul Rudolph’s Endo Laboratories was built near my family’s house on Long Island, I was fascinated — but I don’t think I ever met an architect. Nor did it occur to me to, say, drop by Rudolph’s office.

Denison’s experience was very different. His father was an attorney; his mother, active in the Detroit arts community, was best friends with the wife of Myron Goldsmith, a partner at Skidmore, Owings & Merrill who was responsible for some of the firm’s most important projects of the 1960s and ’70s. Goldsmith took the teenaged Denison to see many of them, including Chicago’s sky-scraping John Hancock Center (1969) and Sears Tower (1973). Among the other architects Denison met were Louis Kahn (who came to his house for dinner, thanks to his enterprising mother) and Minoru Yamasaki (architect of the World Trade Center towers, whose office was near the family’s house). Denison’s parents were going to introduce him to the great Mies van der Rohe as a kind of present for his 13th birthday, but Mies died just before that could happen. 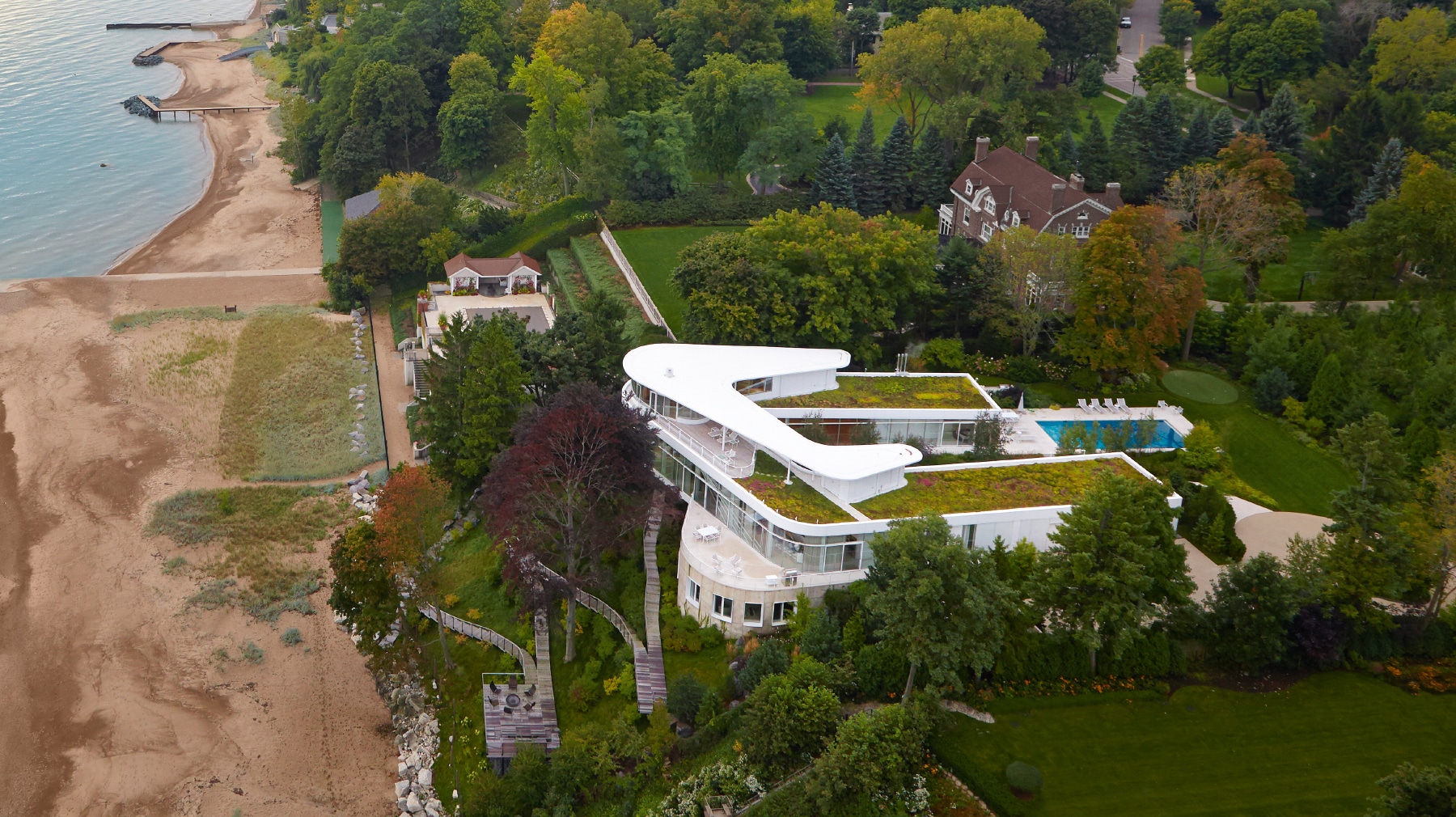 In the Chicago suburb of  Winnetka, Denison built a multilevel — and multilayered — house into the sloping bank of Lake Michigan. The clients, Denison says in his new book, “wanted their own living space to be manageable in size. But they also wanted rooms for their children and grandchildren, who visit frequently. So we made two houses, one above the other.” Photo by Hedrich Blessing

After studying at the University of Michigan, Denison attended “Mies’s architecture school,” the Illinois Institute of Technology (IIT), in Chicago, learning a rigorously gridded form of modernism. He went on to Harvard University’s Graduate School of Design, where his professors included Peter Eisenman, Daniel Libeskind and Henry Cobb, of Pei Cobb Freed & Partners. Not long after he graduated, Denison began teaching at IIT, while also starting his own practice, which today has offices in Chicago and New York. Although he is best known for his houses, he has designed many other kinds of buildings, including restaurants, offices and a forthcoming dormitory at IIT, where he is still on the faculty.

A couple of years after we met, Denison asked if I would work with him on a book about his residential projects. I already knew that his early experiences with architects and architecture were more interesting than anything I could say about his buildings, so I proposed that the text be a Q&A — me interviewing him about his life and his career. The result is the just-published Dirk Denison: 10 Houses (Actar).

A key fact that emerged as we collaborated on the volume was that Denison grew up liking the work of many different architects, ranging from the earthy Frank Lloyd Wright (who designed the Smith House in Bloomfield Hills for friends of Denison’s grandparents) to the ethereal Mies, and he didn’t feel the need to choose among them. That’s why he doesn’t have a signature style. His tastes are varied, and so — luckily for him — are his clients’. 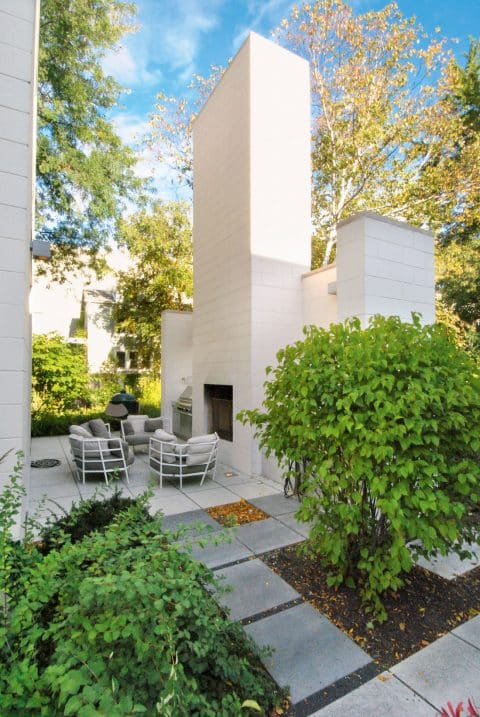 A property in Chicago’s Bucktown includes an outdoor living room that centers on a dramatic fireplace. Photo by Dirk Denison Architects

A successful architect, he might be even more successful if he had a signature style — like, say, Richard Meier, whose white-on-white sculptures riffing on the forms of Le Corbusier are immediately identifiable.

“I’m conscious of the fact that, when you’re establishing yourself as an architect, consistency sells,” Denison relates in the book. “But to me, getting each building right is more important.”

He continues: “Listening to clients, and learning what their lives are about, is the heart of my practice. . . . The challenge of designing houses successfully is that they’re never prototypical, never generic. They’re individual.”

Our discussion begins with Denison talking about the houses he grew up in — first a Foursquare brick house in Birmingham, Michigan, and then a larger structure on a nearby lake. “It was a Southern Georgian Colonial,” Denison tells me, “a big house from the 1920s, with red tile floors, stucco walls with pecan-wood detailing, and heavy carved handrails on the stairway. It was the site that decided it — it had a beautiful rear yard that sloped down to the only lake in Birmingham. And it was in walking distance of downtown, which was important to my mother. I think at heart my mother preferred modern houses. But the benefit of a traditional house was that there were lots of walls for art.”

Recently — after our book was finished — Denison got a call from a couple who wanted him to design a house in Birmingham. (Their contractor, who knew Denison’s work, had recommended him.) When the pair drove him to the site, Denison could hardly believe it: They had purchased his childhood home and were about to tear it down.

Did Denison protest? Not at all. In fact, he says, “I’m excited about the opportunity. The property is beautiful, but the old house has no real relationship to nature. It’s from an era when a house was supposed to protect you from the landscape rather than connect you to it.”

The old house was right for Denison’s family 50 years ago. He has photographs and memories. But the new one, as I learned from getting to know Denison’s architecture, will be right for the new owners. 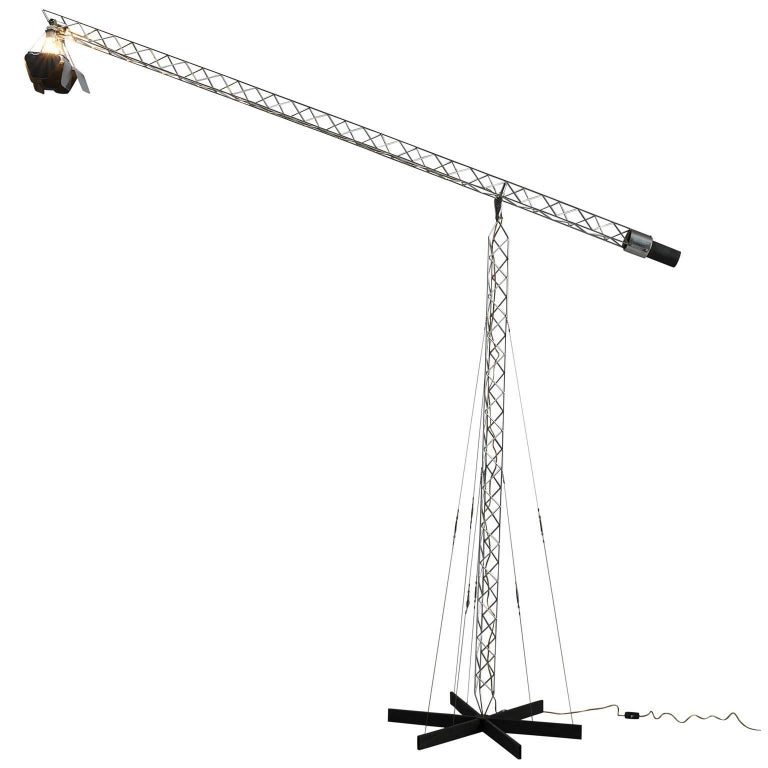 “We have this lamp in our apartment, allowing for overhead light as needed where ceiling fixtures are not possible.” 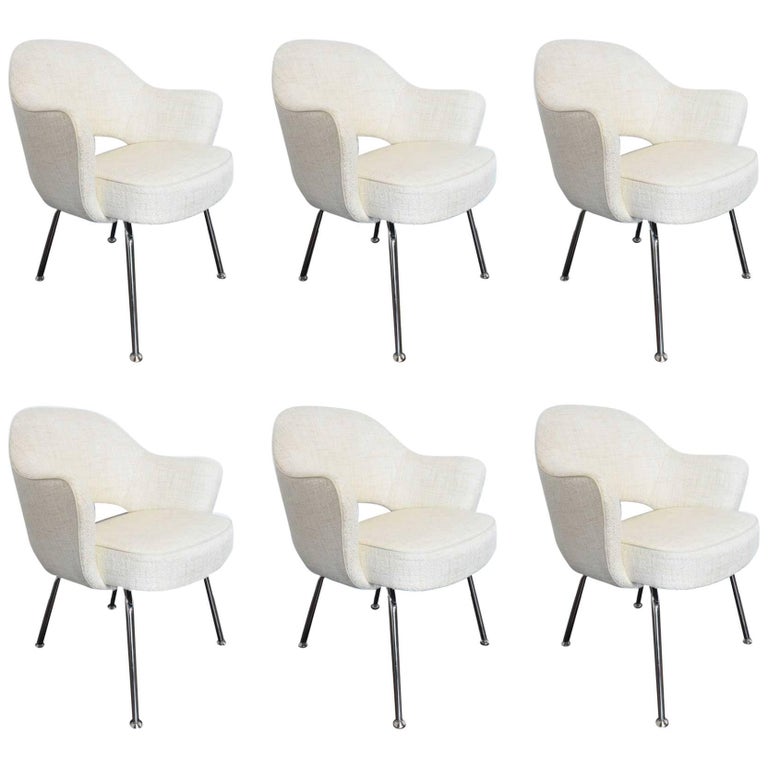 “A perfect chair that we regularly use” 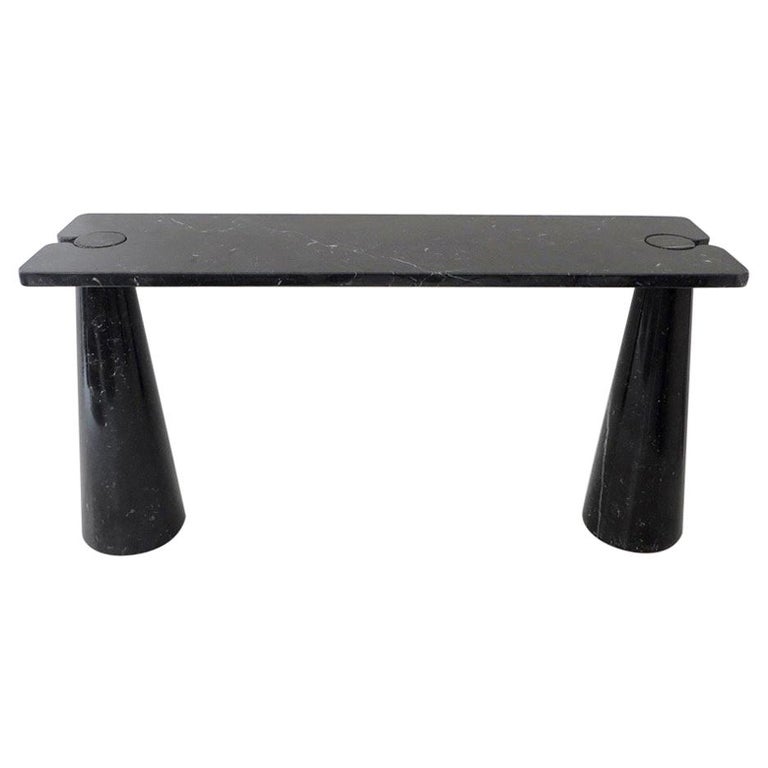 “This handsome piece presents well whether covered with collectibles or as a sculpture in and of itself.” 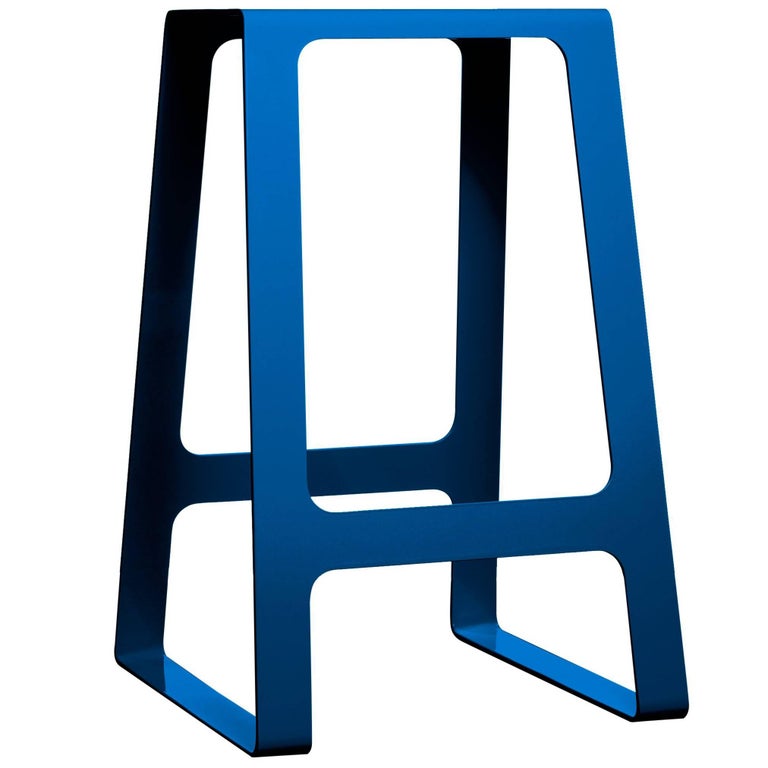 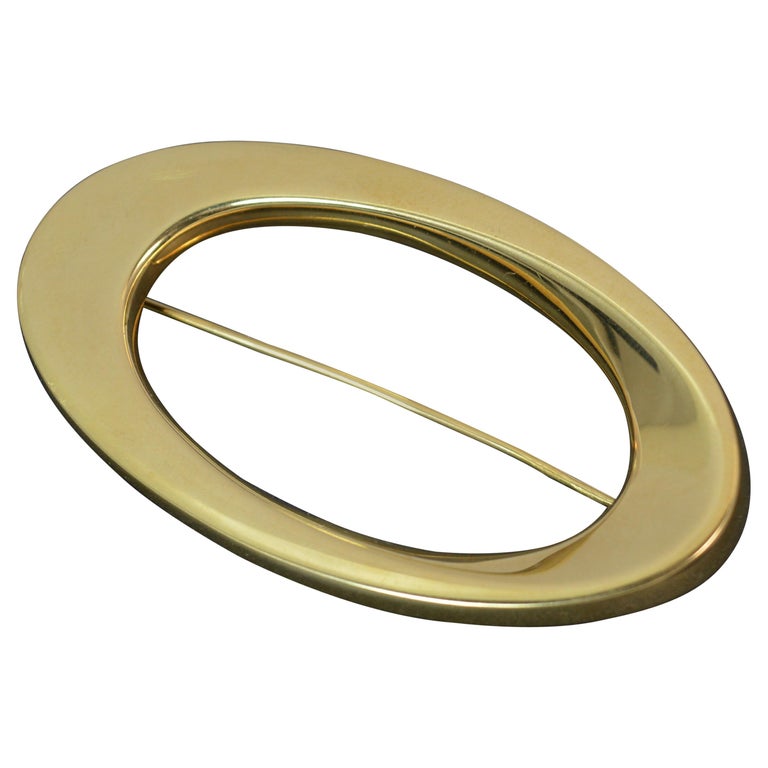 “This has the sort of elegance of form that I strive for in my own work.” 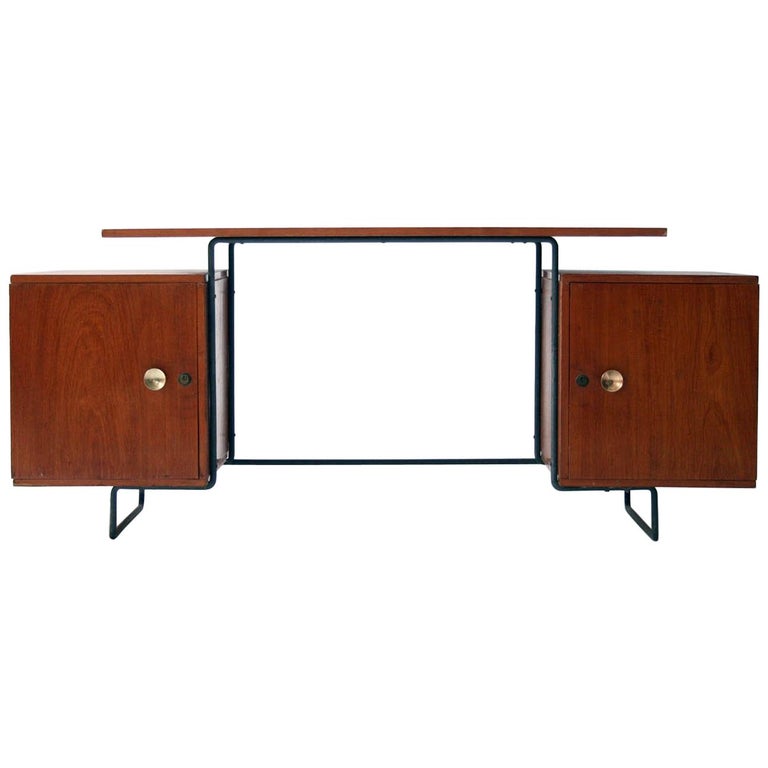 “I’ve been enjoying learning more about Brazilian modern masterworks such as this.” 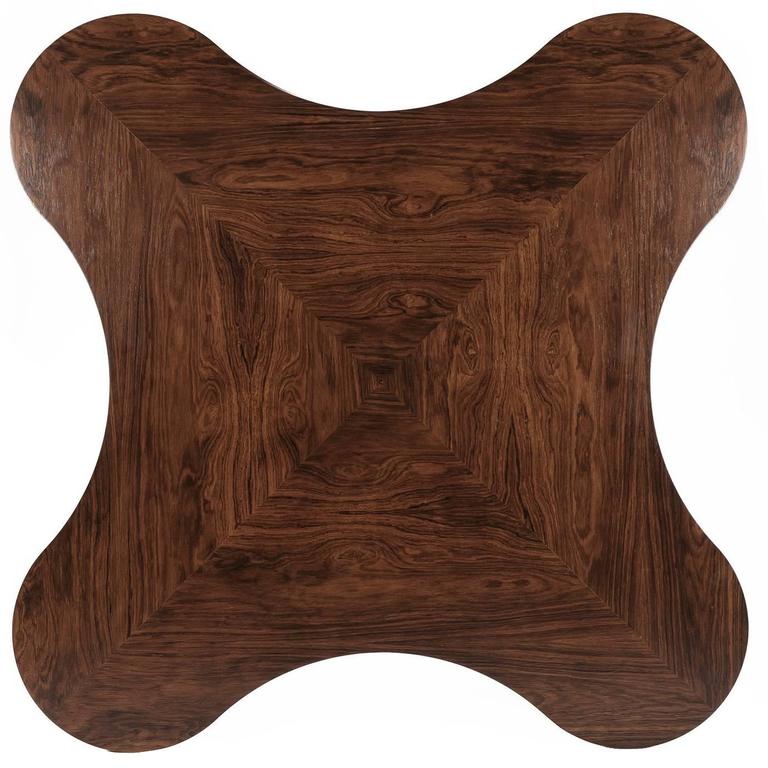 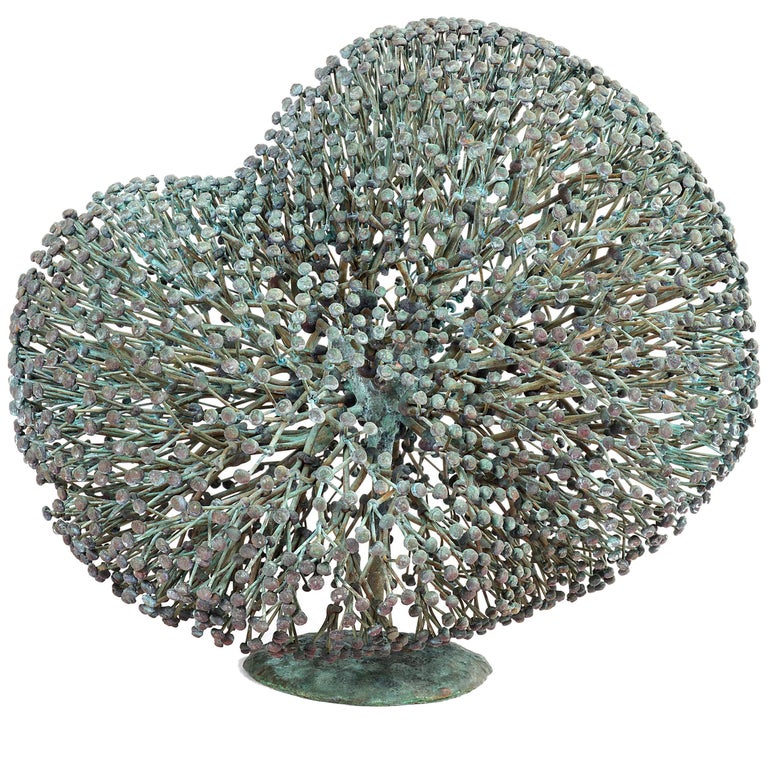 “A favorite of mine since my childhood” 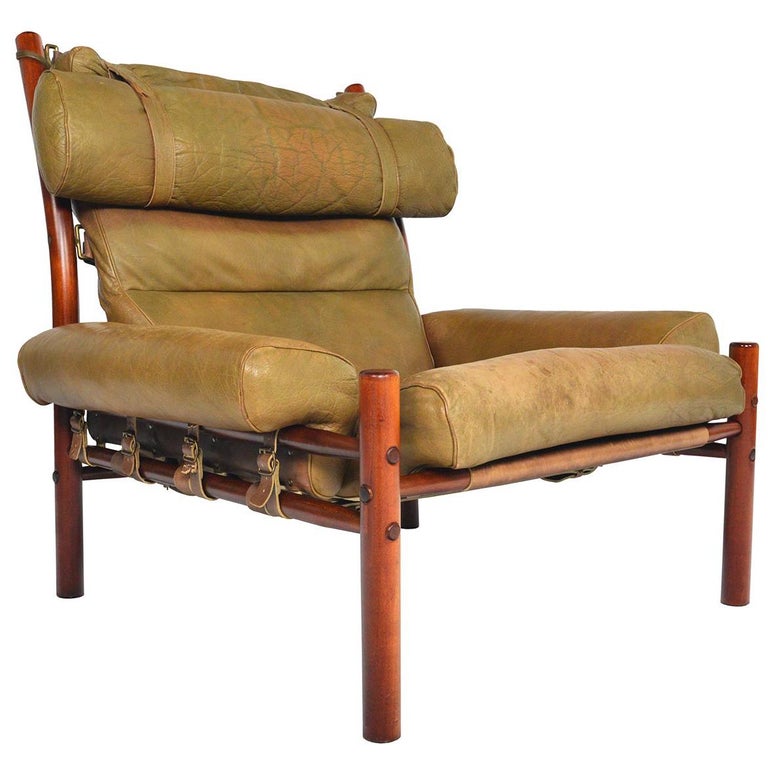 “This looks light and comfortable, and I love the patina on the leather.”