Dorothy Hood’s Boundless Abstractions Are Back with a Fierceness 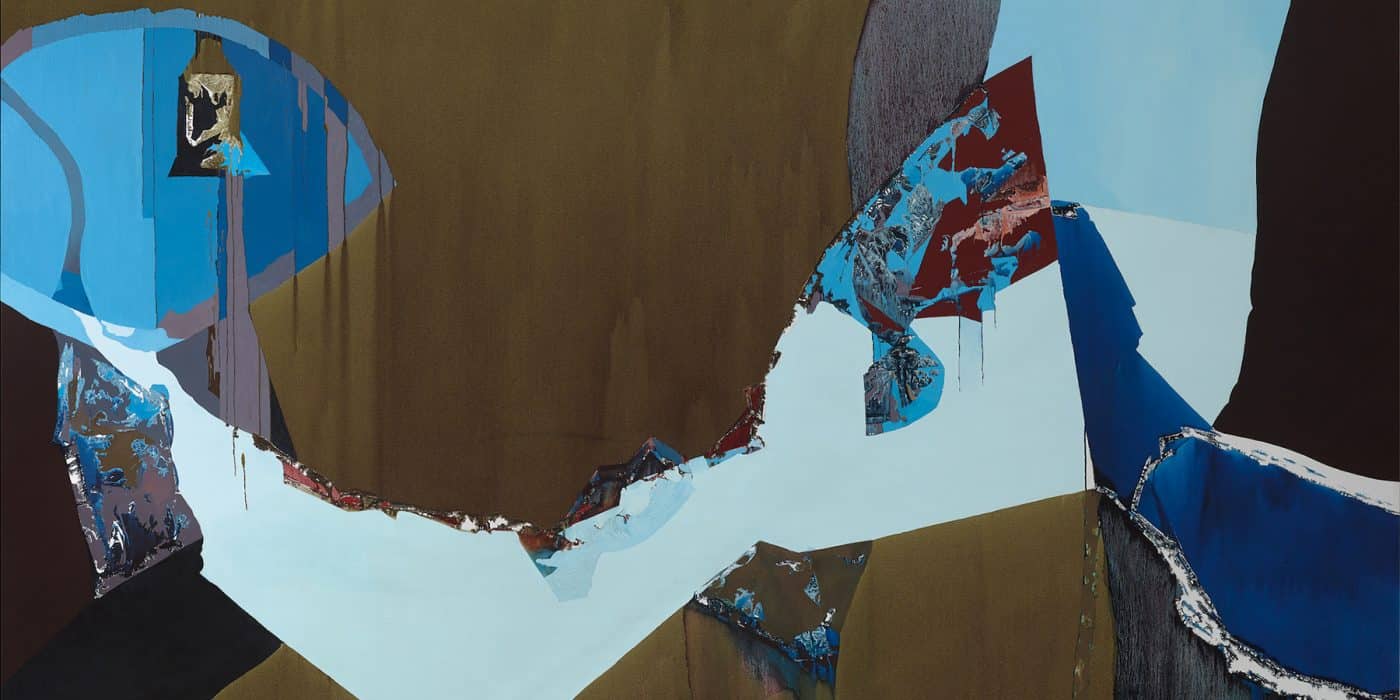 Works from the impressive oeuvre of the largely unknown Texas native are now on view at Houston's McClain Gallery. 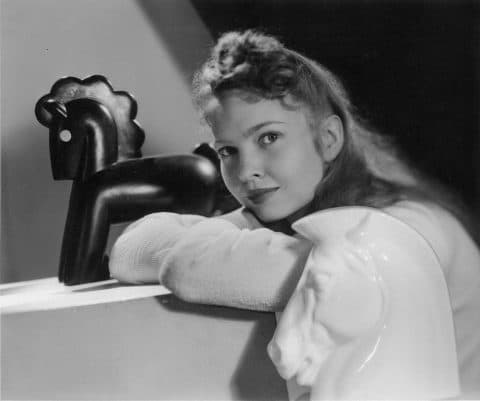 October 27, 2019Born in Texas, artist Dorothy Hood — seen here during her modeling days in the 1930s — spent much of her adult life in Mexico, far from the aesthetic arbiters of New York who were making art-world stars of her contemporaries. Houston’s McClain Gallery is revisiting her work in a show on view now through December 21 (photo courtesy of the collections of the Art Museum of South Texas and the University of Houston Libraries). Top: The exhibit includes the epic Minoan Blue, 1973, on loan from a private collection.

Dorothy Hood might be the best-known artist you’ve never heard of. A fixture of the Houston art scene in the second half of the 20th century, she never met with international success — though her address book suggests otherwise.

“I found letters from the major artists of the twentieth century, curators, museum directors, critics, collectors, patrons all over the world, even astronauts,” says Susie Kalil, an art historian, author and curator, who sorted through Hood’s archives at the Art Museum of South Texas (AMST), in Corpus Christie. While doing research for the 2016 monograph The Color of Being/El Color de Ser: Dorothy Hood, 1918–2000 (Texas A&M University Press) and the accompanying retrospective at the AMST, Kalil discovered flirtatious correspondence between Hood and the influential critic Clement Greenberg; enthusiastic notes from Museum of Modern Art curator Dorothy Miller, the intrepid mid-20th-century advocate of American abstraction; and flattering letters from Philippe de Montebello, then director of the Houston Museum of Fine Art (and subsequently head of New York’s Metropolitan Museum of Art).

Kalil’s exhibition has yet to tour, and Hood continues to be fairly unknown. But Houston dealer Robert McClain, of McClain Gallery, is hoping to change that.

“I admired her work but didn’t know her history and all she’d accomplished,” says McClain, who met the artist in the 1970s. “Reexamining her work now speaks to me as a kind of personal mission.” 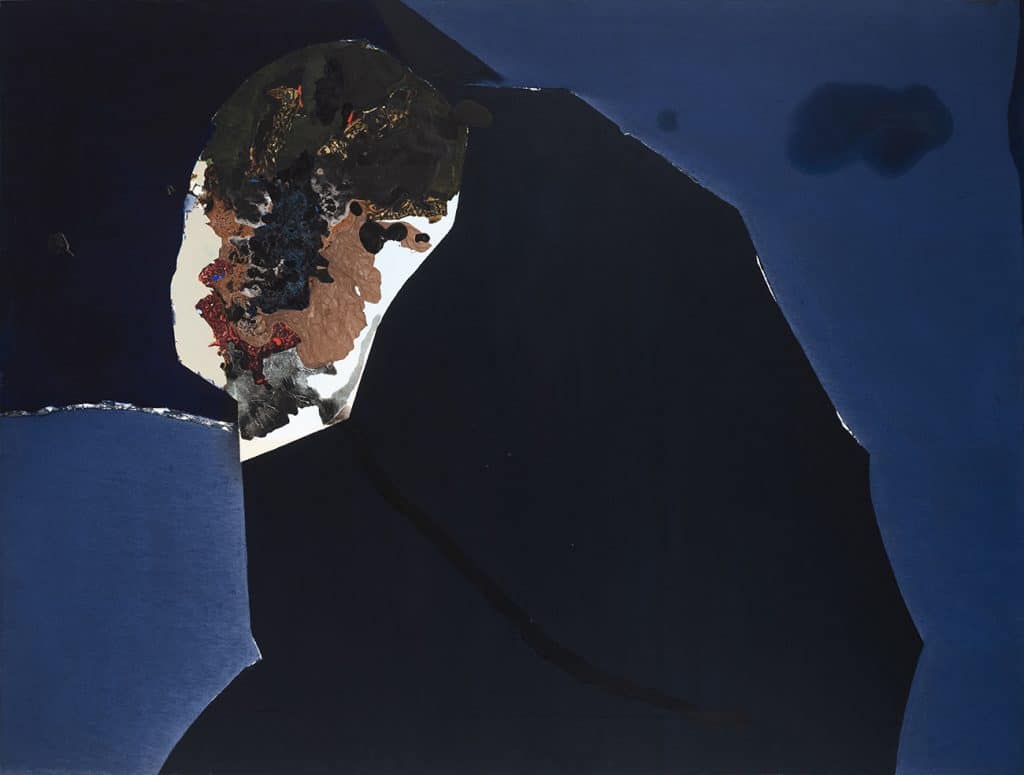 McClain’s first order of business since starting to work with the artist’s estate through the AMST has been to mount the museum-worthy exhibition “Dorothy Hood: Illuminated Landscapes,” on view at his gallery through December 21. The show features four collages and 12 paintings, most of which are large-scale canvases — including several from private collections (and not for sale). He’s also showing several important works by Hood in the gallery’s booth at the Untitled Art Fair in Miami this December.

In her vast abstractions, Hood eloquently transformed flat surfaces into visions of the boundlessness of existence, viscerally mixing ancient and modern, micro and macro. With their drips and ethereal veils of color, the pieces have invited easy comparisons with those of Color Field painters like Helen Frankenthaler, but Hood’s works are far more complex and detailed. They resemble topographical maps of other worlds, where color is deeper and more luminous, gravity is more intense, and the senses are heightened.

Hood had plenty of prestigious fans during her lifetime, but she was never granted that one big New York show that could have put her on the modernist map. Her choices sent her on a path that diverged from the star-making machinery of the 20th-century New York art world, explains Kalil. She wasn’t around to find her footing as a young artist on Ninth Street, like some of her female colleagues from the ’40s. Instead, she was thousands of miles away, in Mexico City. 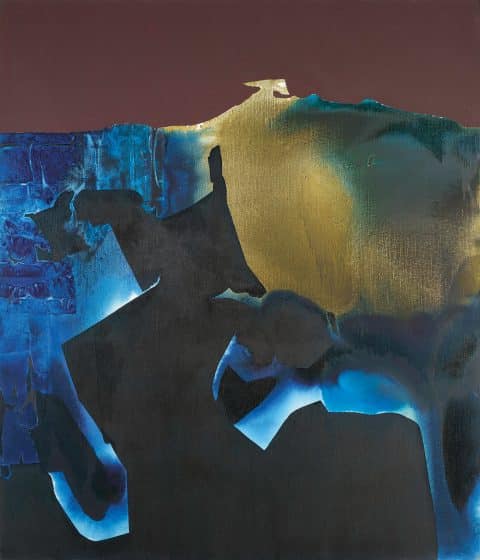 After graduating with a degree in fine art from the Rhode Island School of Design, the Houston native decamped to Manhattan and worked as a fashion model while making art. Seeking adventure and seduced by the eye-opening 1940 exhibition “Twenty Centuries of Mexican Art” at the Museum of Modern Art, Hood and two friends drove to Mexico City in 1941. She stayed for the next two decades. “She was still in her twenties. She didn’t speak a word of Spanish, didn’t have any money, but she was drop-dead gorgeous and stood out in a crowd,” says Kalil. “She was befriended by everyone.”

Before long, she was rubbing elbows with artists like Remedios Varos, Rufino Tamayo, Miguel Covarrubias, Frida Kahlo and Diego Rivera. She found a mentor in José Clemente Orozco, and Pablo Neruda composed poems about her works — figurative images with an eerie, surreal overtone. In 1946, she married José María Velasco Maidana, an internationally renowned Bolivian filmmaker, conductor and composer who was 22 years her senior.

Hood was an avid diarist and saved nearly everything, from personal letters and receipts to media clippings. The show includes some of the ephemera preserved in her archive in the collection of the Art Museum of South Texas (AMST). Photo by Tom DuBrock

While in Mexico, Hood painted and drew up a storm, sending pieces back to prestigious dealers in the States. But the world might not have been ready for her work, as Abstract Expressionism, then Pop art and minimalism took hold. For her part, Hood was interested in the deeper mysteries of existence, and the atmosphere and terrain of Mexico had seeped into her subconscious. 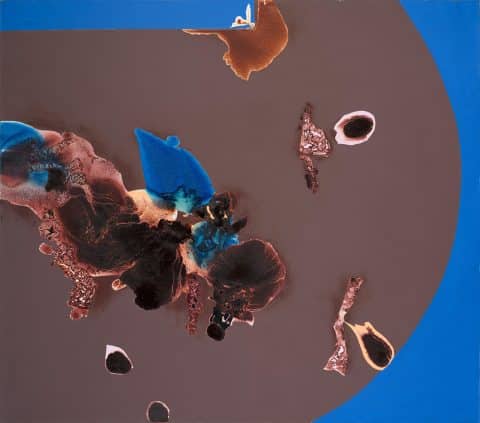 “It’s easy for people to look at the work and love it as a variation of Color Field, but I don’t think that’s the case. You cannot underestimate the influence of Mexico and Mexican Surrealism on Dorothy’s work,” says McClain, who considers that added complexity an asset. “Sure, there are lots of fields of stain,” he continues, “but there is also a real psychic landscape quality in these paintings.” For instance, in Minoan Blue (1973), one of Hood’s most monumental and striking canvases, we see sky, sea and earth at once. Hood fractures the vast surface with fissures and contrasts the smooth passages of stained canvas with tiny, detailed, abstract worlds, bringing to mind a topographical map of a region rich in dramatic geological formations.

McClain’s show includes work dating from the 1940s through the ’90s, but Hood’s juicy wall-size abstractions from the 1970s — which Kalil terms her “breakout period,” when she painted Minoan Blue — take the spotlight. In 1961, Hood had returned with Maidana to Houston, and it turned out to be an important move for her artistically: In the late 1960s, the legendary museum director Sebastian “Lefty” Adler, then head of the Contemporary Art Museum (CAM), Houston, visited her studio and encouraged her to scale up her canvases. Impressed by the resulting outsize abstractions — up to 8 by 12 feet —  he got her a big exhibition at the CAM in 1970, which was followed by one at New York’s prestigious Tibor de Nagy Gallery, in 1974, among others. 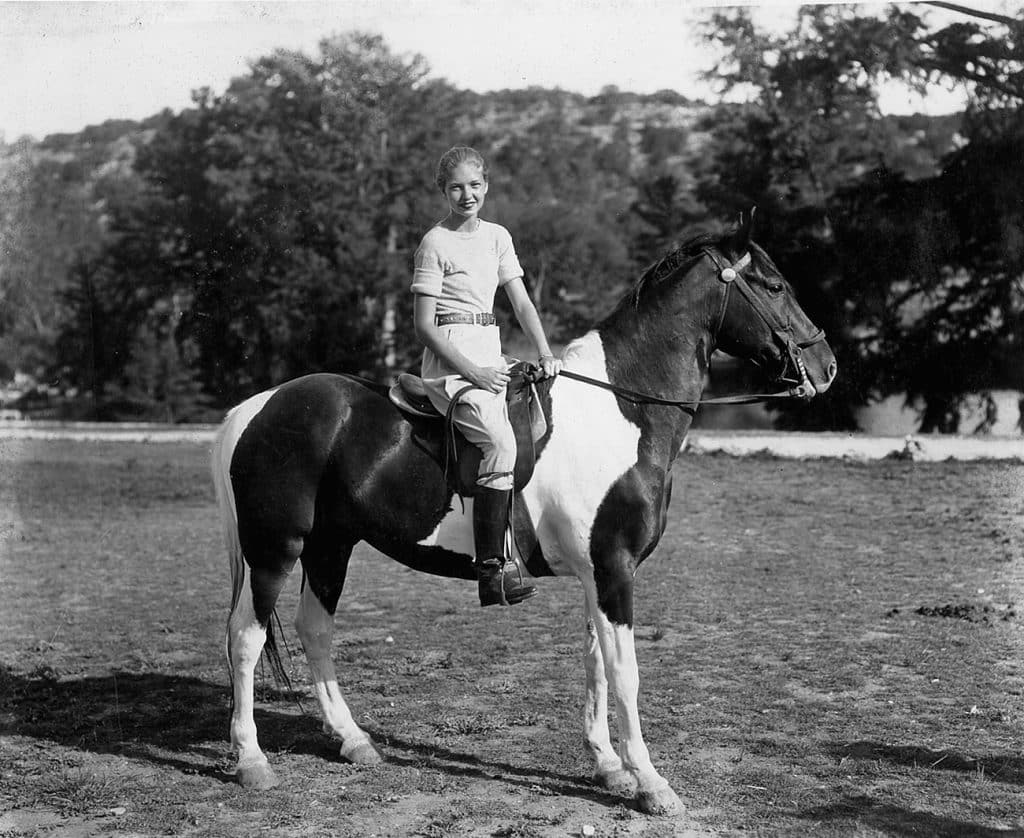 Hood is seen here at Camp Waldemar, in Hunt, Texas, in 1934, several years before moving to Mexico. Photo courtesy of the collections of the Art Museum of South Texas and the University of Houston Libraries

Those large canvases offered ideal surfaces on which Hood could play out her moving visions of oceanic space and infinite depths.

“She was thinking about science and geology, mythology, the cosmos,” says Kalil. “When she was in Mexico, going to the Aztec ruins and the mountains, the sky and the stars had to be so transporting. And when she came back to the limitless skies of Texas, it was the age of space exploration, and Houston was at the center of it.” 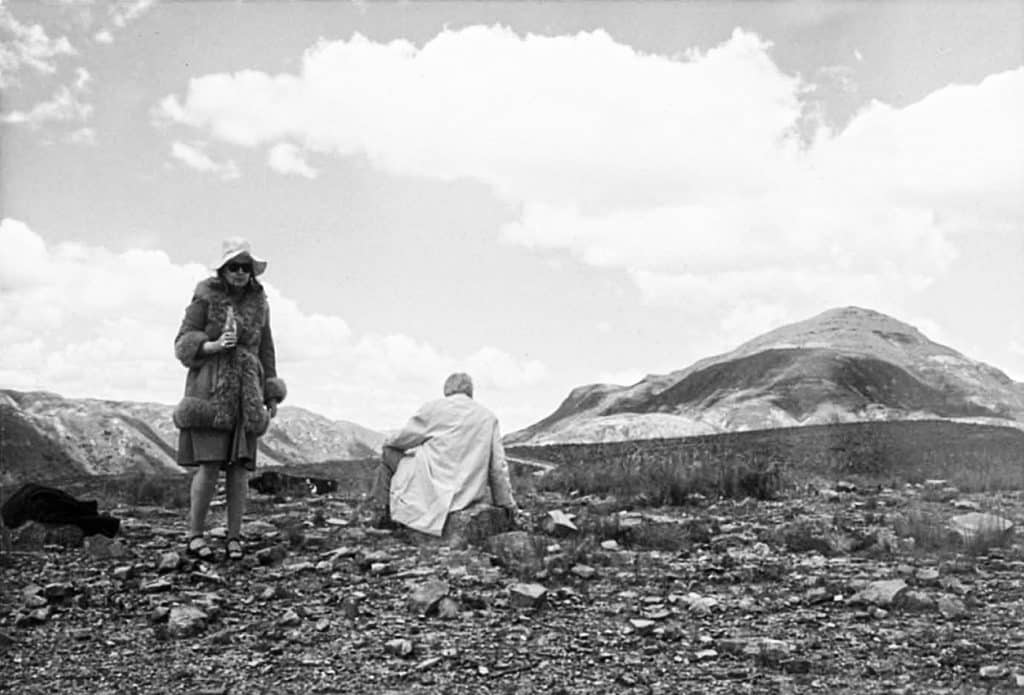 In 1946, Hood (left) married José María Velasco Maidana, a celebrated filmmaker, conductor and composer. They’re photographed here in his native Bolivia. Photo courtesy of the collections of the Art Museum of South Texas and the University of Houston Libraries

Hood summons the vastness of space — celestial, oceanic and otherwise — in such moving paintings as Space of the Mind’s Eye — The Cave (1970s) and Illuminated Earth (1970s), the show’s title work. But, as McClain explains, her pieces also convey the intensity of the life she had lived. “She paints deep, deep fields of color – rarely black — deep blues, reds, not unlike Mark Rothko, with a real depth of emotion,” he says. “And it does come from her personal experience.”

Hood’s legacy is clearly still taking shape. But even if she never achieved the success or notoriety some other artists experience in their lifetimes, she never shortchanged herself. “One thing I’ve taken away from all this,” says Kalil, “is that, wow, Dorothy really took a bite out of life.”