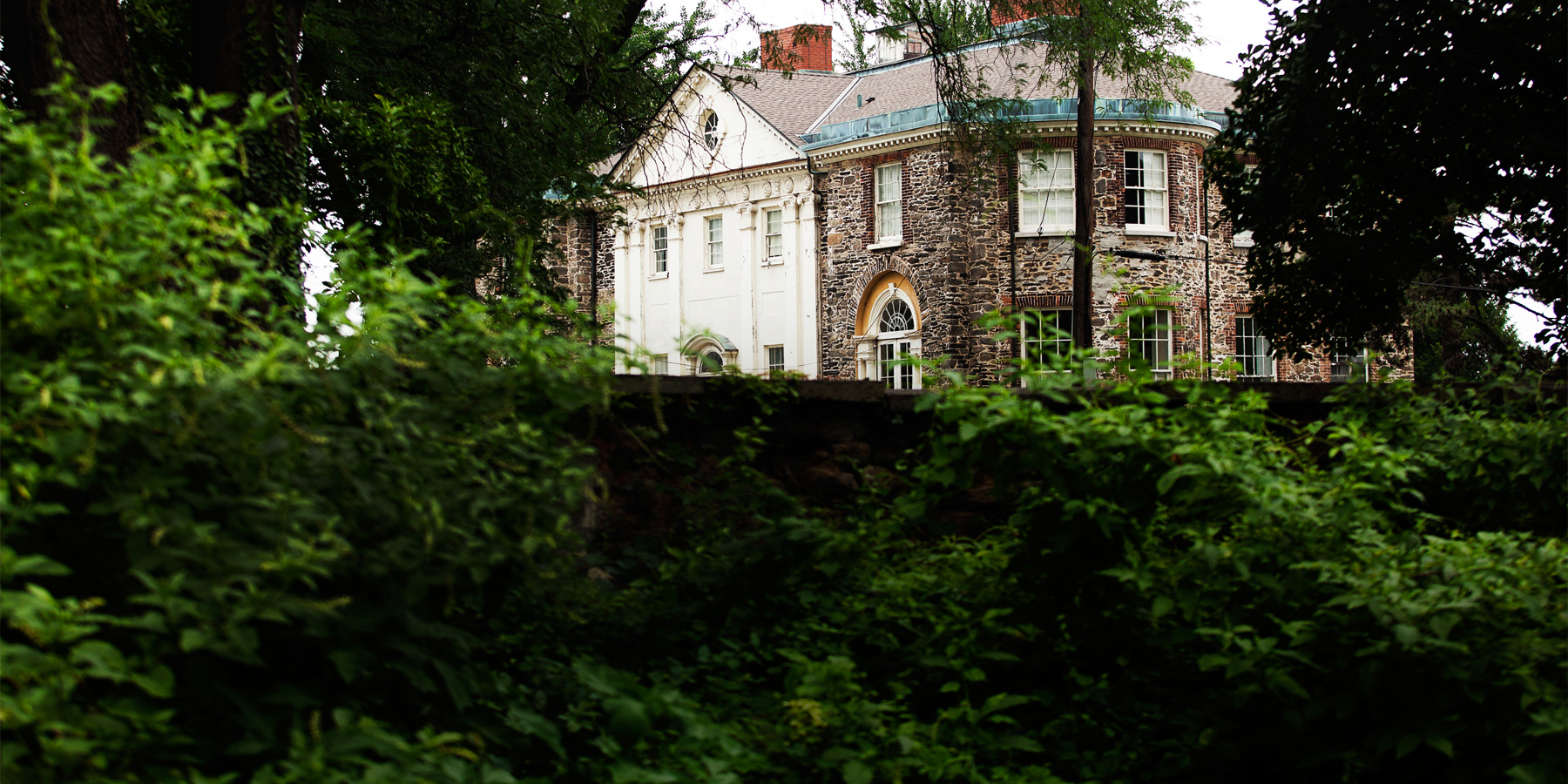 On a visit to an 18th-century estate along the Schuylkill River, the best-selling author Elizabeth Gilbert — whose botany-infused novel, The Signature of All Things, is out now — talks plants, people and the past with landscape architect Barbara Paca. 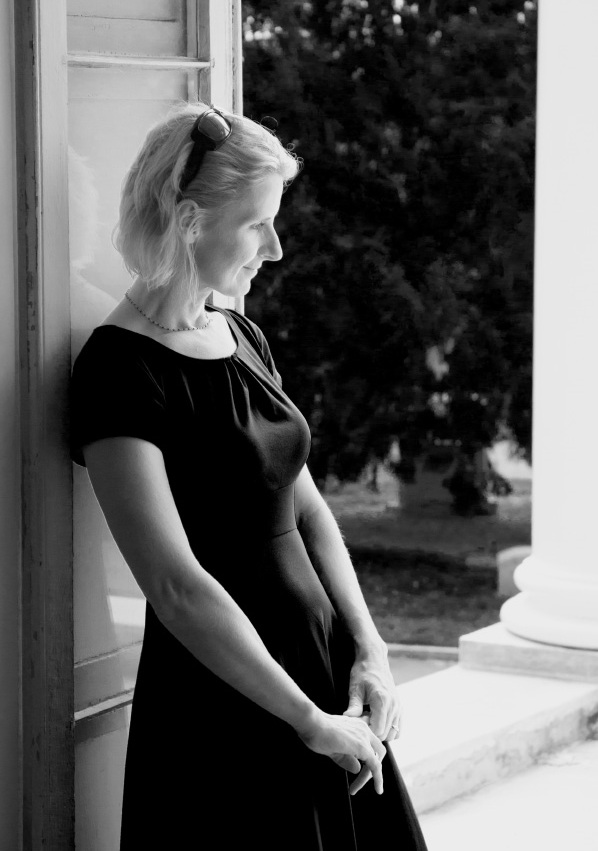 October 2013Elizabeth Gilbert set her latest novel, The Signature of All Things, in early-19th-century Philadelphia, where her heroine lives in a house inspired by The Woodlands, a city landmark to this day.

On a sunny Sunday morning in early September, Elizabeth Gilbert stands in the foyer of The Woodlands, a 230-year-old neoclassical mansion in western Philadelphia that now presides over a rambling urban cemetery. She wears a bright green dress and sneakers and holds in her arms her small brown dog, Rocky, who stares up at her with expectant eyes. Gilbert is the author of eight books, including Eat, Pray, Love, her 2006 memoir that tenaciously held a position on the New York Times best-seller list for 187 weeks. At the time of her short pilgrimage to The Woodlands (Gilbert lives only an hour’s drive away, in Frenchtown, New Jersey), her latest book, a novel called The Signature of All Things, is due out momentarily, and she is about to begin a 15-city gauntlet of readings, signings and lectures. But on this bright, pre-fall day, she’s eager for a tour. “Do you think we can go down to the cellar?” she asks. “It’s my favorite part of the house.”

The Signature of all Things is Gilbert’s first work of fiction in more than a dozen years, and it’s a rich novel unlike anything she’s published. Set in the 18th and 19th centuries, it tells the tale of a wealthy Philadelphia woman who dedicates her life to botany. (It has received warm and ecstatic reviews.) Gilbert first came to The Woodlands in 2011 while researching the book, and she used the mansion and records of its gardens and landscaping — pre-cemetery — as inspiration for her main character’s estate, which she called White Acre. “It was great to be able to picture what the light might have been like, what the view might have been,” Gilbert explains. “It almost becomes a character in the novel.” 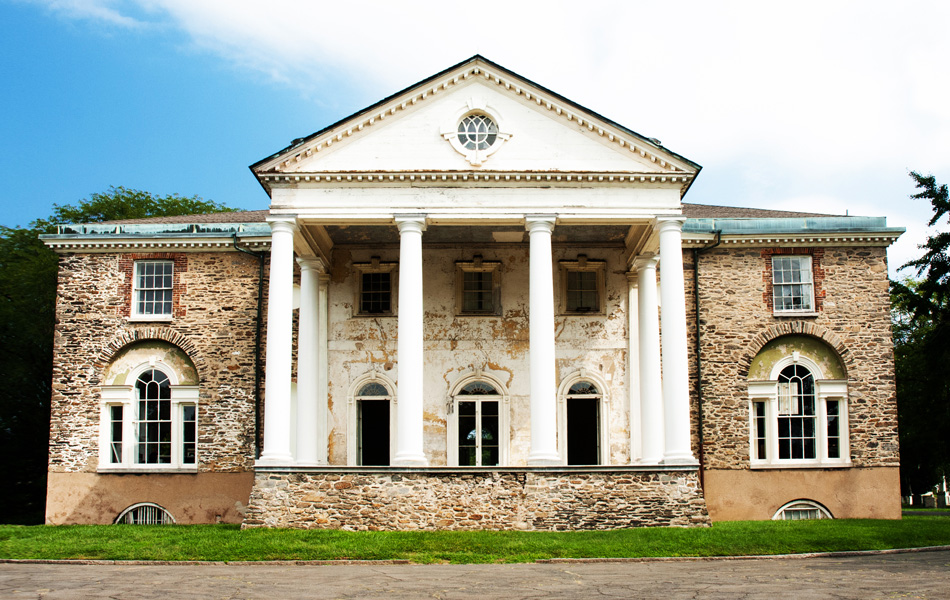 The riverfront facade of The Woodlands with its central neoclassical portico flanked by symmetrical stone wings. 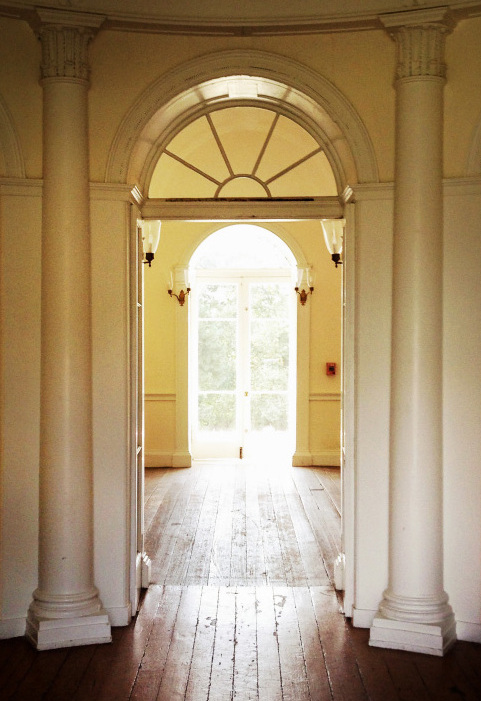 The house’s saloon — its main entertaining space — opens onto the portico. While almost entirely devoid of furnishings, the interior is filled with natural light.

While conducting her research for the novel, Gilbert consulted with numerous experts — botanists, historians and architects among them. These included Barbara Paca, a noted New York- and Maryland-based landscape architect and scholar of early American garden design. On the eve of the publication of Signature, Gilbert and Paca decided to visit Woodlands together for a tour of the house led by Aaron Wunsch — a Woodlands board member and an assistant professor of historic preservation at the nearby University of Pennsylvania — and wound up engaged in a lively discussion about landscape, plants and the roles they’ve long played in American society.

“I’m having a flashback,” Paca says shortly after she emerges from her dusty Volvo station wagon. “I came here twenty years ago to examine the stable block, which is almost exactly the same as the one at Wye Hall.” (Paca has done preservation research at this 18th-century plantation on Maryland’s eastern shore, which was the home of her ancestor Governor William Paca.)

The Woodlands was built in 1780 by William Hamilton, a wealthy landowner with Tory sympathies and the airs of a gentleman scholar. It’s an imposing stone mansion, with a central two-story portico on its southern side that once overlooked gardens sloping down to the Schuylkill River. Now, trees and train tracks have encroached on that view, and tombstones and mausoleums have figured in the vista since 1840. That’s when a private cemetery company took over the estate, intent on protecting this rare tract of open land from the industrialization that was rapidly transforming Philadelphia. 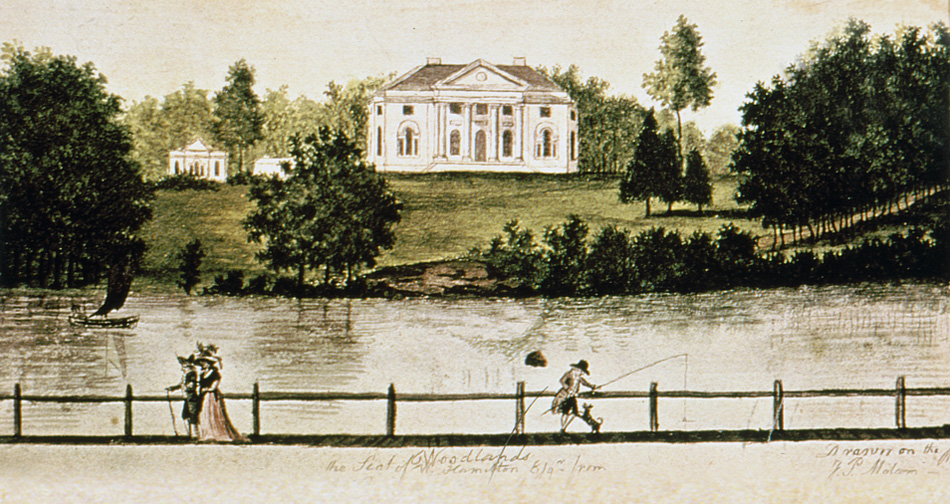 A detail of James Peller Malcom’s watercolor Woodlands, the Seat of W. Hamilton Esq., from the Bridge at Grey’s Ferry, ca. 1792. Courtesy of the Dietrich American Foundation 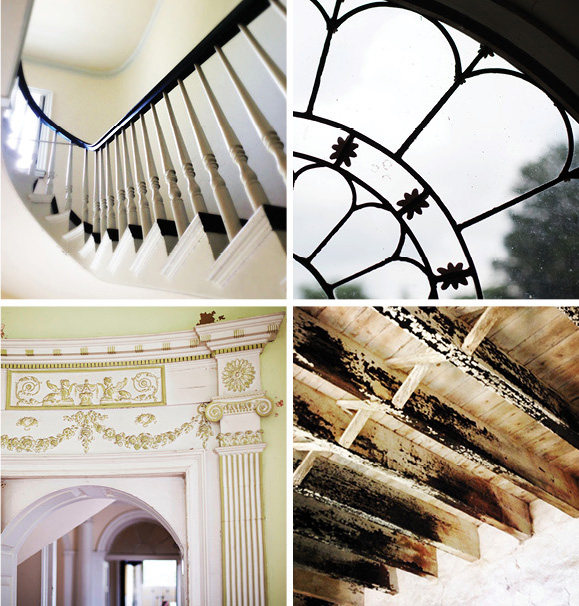 Views of the house (and, bottom right, stable block) show its various states of conservation.

The house has many now-familiar attributes of post-Revolution-era design, but at the time of its construction, it was considered extraordinary. “To have a dining room thrust out into the surrounding landscape was quite unusual,” says Wunsch, gesturing toward the room’s bay of tall French windows. “Even more so because the room’s oval shape mirrors planting beds that were part of the estate’s landscape.” An avid gardener in her own right, Gilbert carefully surveys the room.

She set her novel in a time when academia and high society intertwined. Men like Hamilton dabbled in art, architecture and science, and their houses and gardens were often open to “genteel visitors.” Her main character, Alma Whittaker, writes papers for academic journals and turns her estate into a laboratory for research. (There’s also a tortured love story, not to mention a soul-searching trip around the world.) “Botany was one of the few sciences that welcomed women,” Gilbert says. “Or at least it did for a time. I was very concerned that all the things I had Alma do were plausible.”

There weren’t really any architects in America in 1780,” Wunsch tells the women as they continue their circuit of the ground floor. “One theory is that Hamilton designed Woodlands himself with the help of a local builder.” The house features a great number of architectural innovations, including a cryptoporticus that’s tucked under the front steps and serves as a hidden passageway, and a spiraling back staircase that runs from basement to attic. “Both allowed servants to move through the house without being seen,” Wunsch explains. “They also provided great ventilation. Shall we move into the next room?” The dog lets out a sigh. “But Rocky,” Gilbert says, holding his face. “I know you’re a fan of early-American architecture.”

Among the Woodlands’s most impressive features were its grounds and large greenhouse. Hamilton collected rare botanicals from around the world. In Gilbert’s novel, Alma’s father, Henry Whittaker, is a low-born Englishman who finds his way to Philadelphia after a youth spent traveling the globe in search of specimens for the noted English botanist Sir Joseph Banks, and makes his fortune selling plants for medicinal purposes. “I borrowed details from the life of John Bartram,” Gilbert says of Hamilton’s neighbor, another American botanist. (She rejected as muse the house at Bartram’s Garden, just down the Schuylkill, because she found Bartram’s Quaker taste too restrained for the likes of brash Henry Whittaker.) “There was big money in horticulture.” 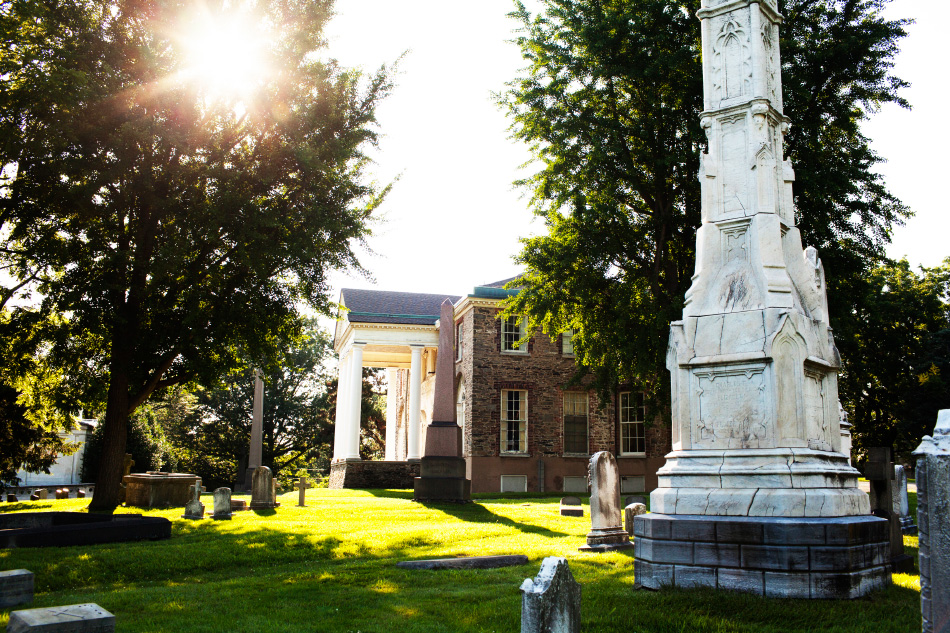 Since its sale in 1840, the house has been set within a park-like 54-acre private cemetery. Photo by Ryan Collard, courtesy of The Woodlands. 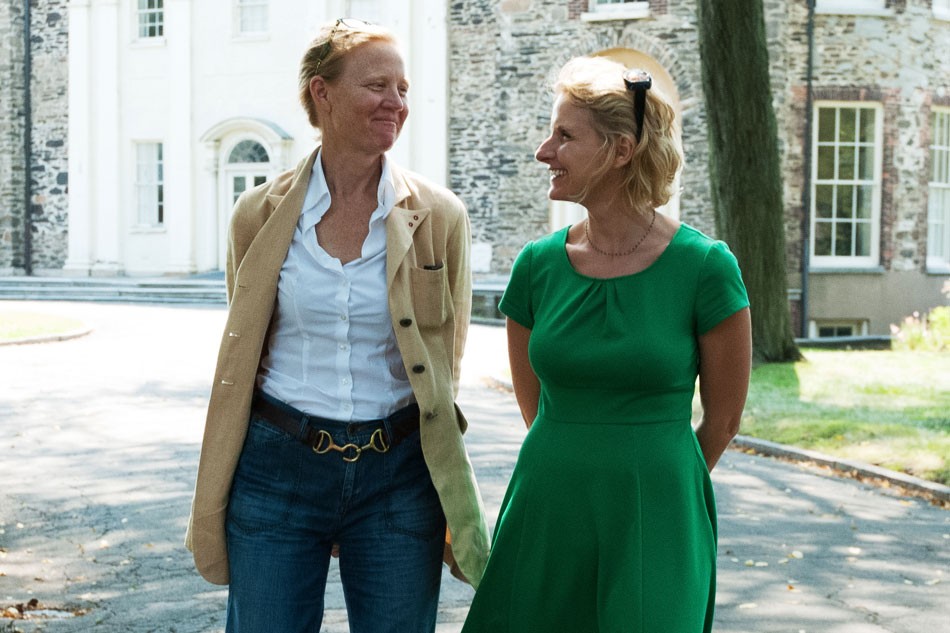 Landscape architect Barbara Paca and Gilbert stroll down The Woodlands’s front drive. Paca was one of many experts Gilbert consulted in the course of researching her novel. 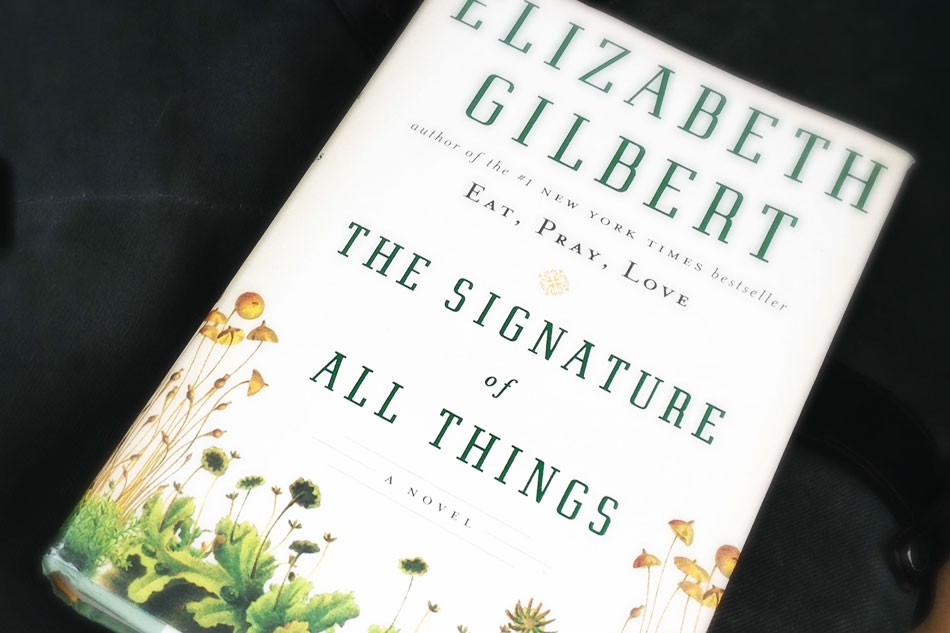 Paca nods her head. “Wealthy Americans collected plants to display their status but also for the betterment of the country,” she says. “Finding new crops or anything that offered refinement — it was considered a form of nation building.”

In the home’s saloon, or entertaining hall, which opens onto the portico, the walls have shallow alcoves to hold statues and its many doors were once hung with mirrors. “One of the things I got from speaking with Barbara,” Gilbert says, “was the idea that women were often in charge of these estates while their husbands were away making money.” Paca laughs and says, “Yes, it was, ‘I’m going to the West Indies for five years, darling. Design the grounds while I’m gone.’”

With Wunsch in the lead, the women make their way to the basement — and Rocky finally begins to show interest. “If there’s a rat behind that wall, Rocky will find it,” Gilbert says, carefully stepping through a warren of rooms where, Wunsch explains, servants once cooked, ate, slept, kept watch over the family silver and wine stores and generally insured that the household ran smoothly. (Hanneke de Groot, the no-nonsense housekeeper in Signature, oversees all these operations at White Acre.) 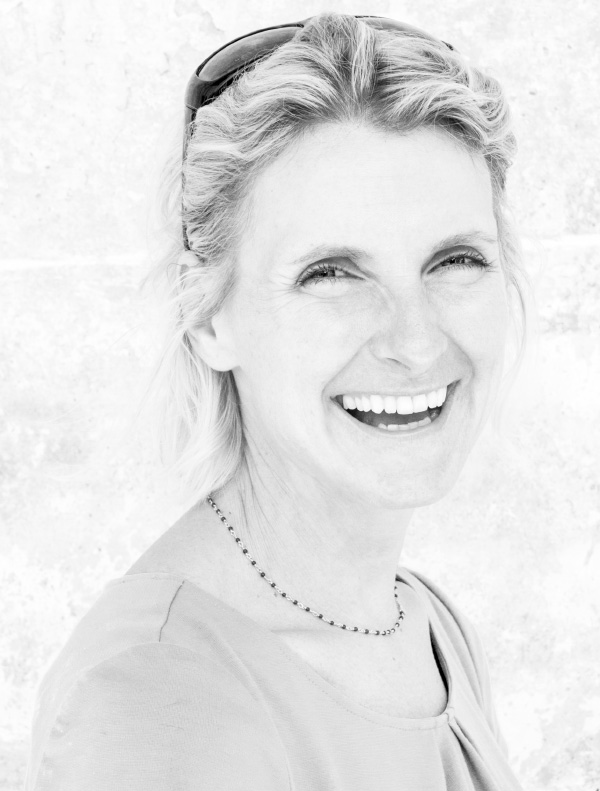 Following up on the remarkable success of her 2006 memoir, Eat, Pray, Love, Gilbert is enjoying nearly unanimous critical praise for her new novel.

“When I started the book, I was going to have Alma be a brilliant scientist who nobody listened to because she was a woman,” Gilbert explains, as she strokes the horsehair plaster of the walls. “Then I decided she would be taken seriously but that she would be plagued by doubt and couldn’t present her work until it was absolutely perfect. That’s an even more insidious problem, and it persists for women in the workforce today.”

Lunch soon follows, set out upon a table placed on the house’s sun-drenched back porch. After the basement’s cool darkness, the contrast is striking. Gilbert and Paca start chatting about novels that have landscape as a major focus — Wuthering Heights and Atonement are mentioned. Gilbert is the center of calm, speaking in carefully constructed sentences. Paca is more animated as she recalls arcane texts and research projects. It’s hard not to see a little of Alma in both of them.

“After you finished the novel, what surprised you most about the process?” Paca asks. Gilbert closes her eyes for a moment and then says, “How quickly I wrote it. I over-researched and over-prepared. So when I finally sat down, it came very fast.” She points to the columns of the porch, their new coat of paint one of the building’s few visible refurbishments. “It’s like when you’re fixing up a room, after you’ve moved all the furniture out, done the sanding, done the taping. At that point you can just roll the paint on.”