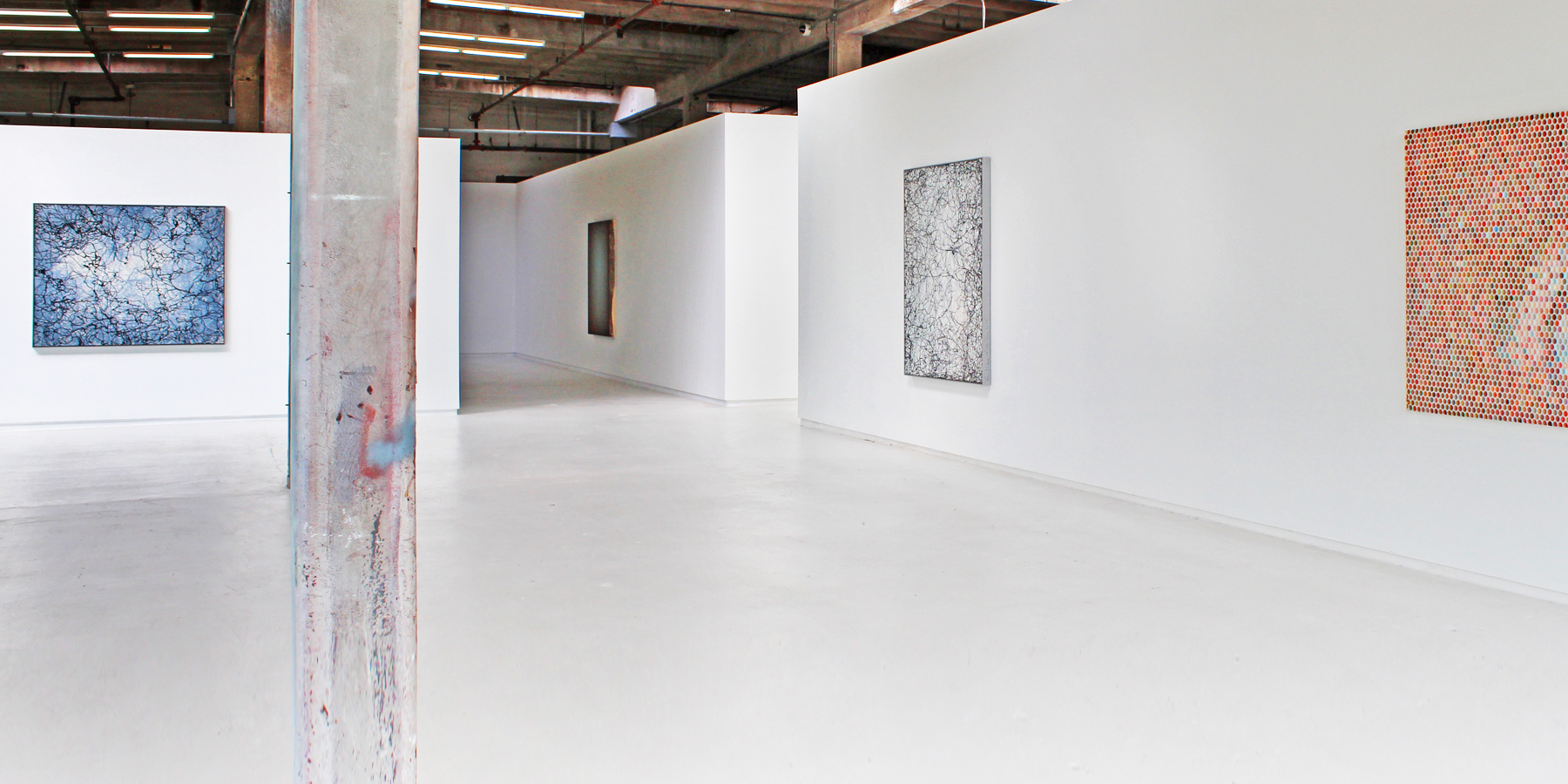 In a new exhibition at San Francisco's Hosfelt Gallery, artist Emil Lukas takes his experiments with authorship to a new level — inviting larvae, bubble wrap and thread to help determine the visual outcome of his abstract mixed-media compositions. 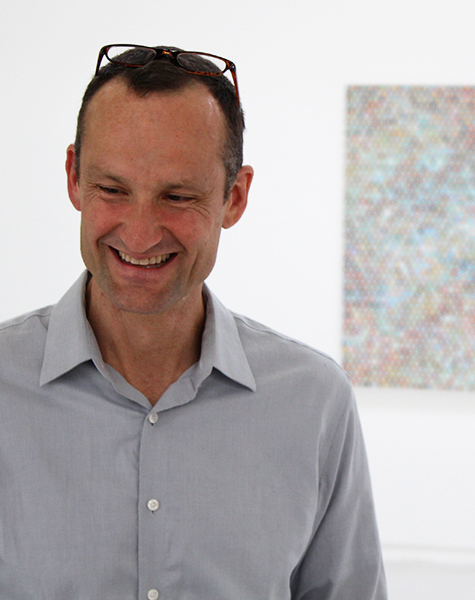 Emil Lukas is dedicated to exploring ways that he can limit his own control over his work, placing himself squarely in the lineage of modern masters from Picasso to Hans Arp. Top: On view at San Francisco’s Hosfelt Gallery through May 9 are works from three recent and ongoing Lukas series. Photos by David Stroud

With his latest body of work, Emil Lukas situates himself in a lineage of modern artists interested in surmounting their own conscious creative intentions. Collages of found material by Pablo Picasso, Georges Braque and Kurt Schwitters, like the notorious “readymades” of Marcel Duchamp, allowed chance or mass-produced materials to determine details of novel artworks.

Lukas has added a new technique — “larva painting” — to the repertoire of artistic collaborations with chance. These pieces are among a variety of other recent work now on view at San Francisco’s Hosfelt Gallery through May 9. His 2014 canvas-over-panel piece Cold Slope may look at first like an exercise in gestural abstract drawing, distantly descended from Jackson Pollock’s webs of flung and drizzled enamel. But the graphic energy of Lukas’s work lacks completely the expressionist drive and follow-through of Pollock’s execution. And no wonder: The ornate traceries of black line in Lukas’s work were produced by ink-dipped fly larvae trailing pigment across the surface.

How much influence 50-year-old Lukas, based in Stockertown, Pennsylvania, has over the movements of his insect collaborators we can only guess, but they generate paths and rhythms unlike anything a human hand might produce. I can think of nothing comparable in contemporary art, other than the chalk floor drawings Japanese artist Yukinori Yanagi has made intermittently since 2000, which involve carefully following the paths of an ant trapped within a steel enclosure. 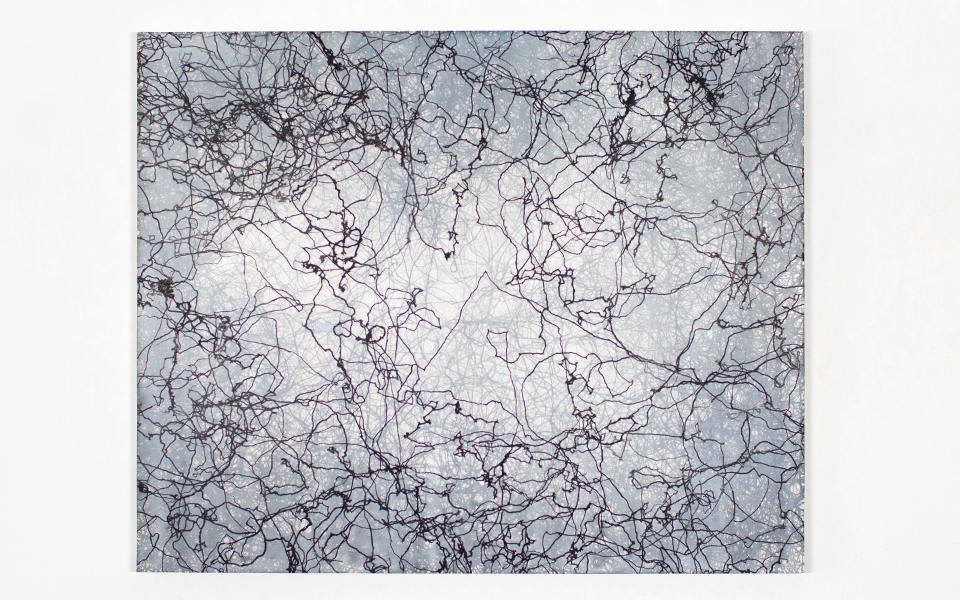 For his 2014 mixed-media painting Cold Slope, Lukas allowed chance — or, rather, the paths of ink-dipped fly larvae as they moved across the canvas — to dictate composition. 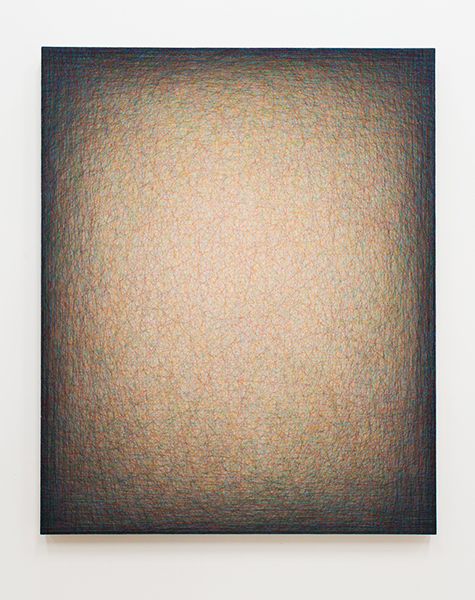 Another facet of the artist’s production involves complex networks of colored thread, which he weaves across a frame; The Ring of Distant Events, 2015, seems to be lit softly from behind.

A series of very spare ink drawings on panel-mounted paper, also begun by larvae, bring to mind the sparest of Richard Diebenkorn’s abstractions on paper. But, again, the starkness and slackness of line in Lukas’s work suggest a vitally different approach.

The Hosfelt show samples three other ongoing strains of Lukas’s art, which have little in common besides his impulse to limit his own control over the outcome of his efforts. The ongoing “Thread Paintings,” of which The Ring of Distant Events, 2015, is a superior example, are made by crisscrossing innumerable fine threads over the void of a framed white rectangle. Their randomly sequenced hues create a haze of colored striations through which soft light seems to pulse from behind.

Each “Bubble Painting,” meanwhile, comes pock-marked with a grid of semi-spherical indentations — the result of Lukas having molded plaster over bubble wrap. Proceeding intuitively, he then tints each indentation with a color, creating a sort of pointillism so gross in grain that it defies resolution into an image.

How much influence Lukas has over the movements of his insect collaborators we can only guess, but they generate paths and rhythms unlike anything a human hand might produce. 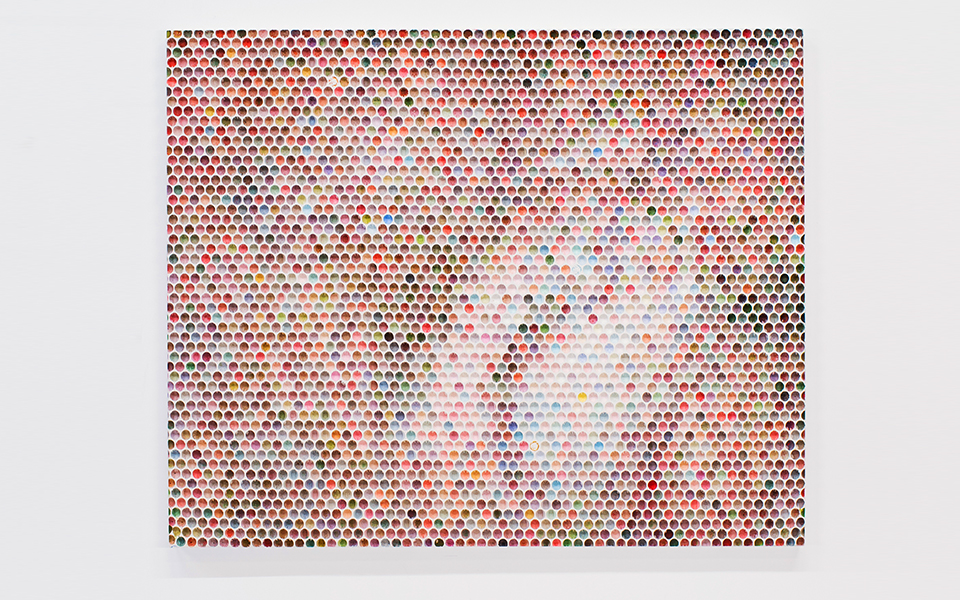 Works like Double Bend, 2015, from Lukas’s “Bubble Painting” series, recall pointillist paintings from afar, but, in fact, their honeycomb-like surfaces result from plaster that the artist molded over bubble wrap, creating individual indentations that he then tinted with color. 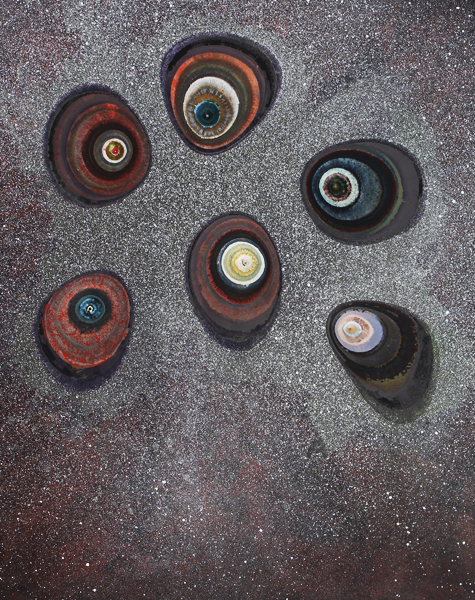 Lukas creates “Puddle Paintings” like Between Stars, 2014, by flooding a manipulated canvas with layer upon layer of pigment; the colors pool and dry in the surface’s depressions, offering the visual impression of geological strata.

Each “Bubble Painting,” meanwhile, comes pock-marked with a grid of semi-spherical indentations — the result of Lukas having molded plaster over bubble wrap. Proceeding intuitively, he then tints each indentation with colors, creating a sort of pointillism so gross in grain that it defies resolution into an image.

The “Puddle Paintings,” meanwhile, may be the artist’s most improbable inventions. In Between Stars, 2015, a black field spattered with white paint, the canvas has six ovoid depressions interrupting it. Each depression is ringed with color, suggesting craters with geological layers exposed. A back view — unavailable to the casual gallery visitor — clarifies Lukas’s procedure. To create the depressions, in which he then puddles successive layers of paint, he has threaded his canvas to extensions of the frame, stabilizing the eccentric ovoid forms and incidentally giving a new meaning to the old term “shaped canvas.”