The designer reflects on the clients and collaborators who inspired some of her most memorable projects. 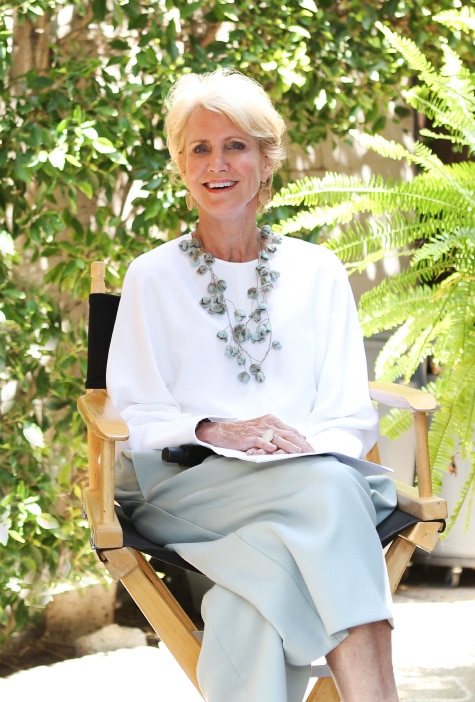 July 31, 2017Dallas-based designer Emily Summers spoke on a panel titled “The Power of Pink” at this year’s Legends of La Cienaga, in Los Angeles. Summers says she came to realize that some of her best work has involved designing for and collaborating with strong women. Photo courtesy of La Cienega Design Quarter, Legends 2017

This past May, the annual three-day extravaganza in L.A.’s exciting design district known as Legends of La Cienega celebrated diversity and originality in design with the theme “Your True Colors.” I sat on a discussion panel titled “The Power of Pink: Femininity in Design” in the lovely back garden of Hollyhock. On that sunny afternoon, I joined the talented designers Suzanne Rheinstein, Hollyhock’s proprietor, and Kelly Behun to discuss the idea of femininity in design. In preparing for the talk, I was flummoxed at first. I’m a gender-neutral designer. I don’t think in terms of femininity or masculinity when I start a project. Plus, I’m a modernist: I generally gravitate toward neutral colors, and I let art provide pattern and color in most of my rooms. I don’t use a lot of floral fabrics.

Then, after reflecting on my projects, I started to rethink my initial response. After all, I’ve been asked to do bedrooms for girls and boys, which are frequently gender specific. And there are certain personal spaces I’ve created — bathrooms and dressing areas — that are often geared toward what is traditionally considered a man’s or woman’s taste. I’ve been asked to design man caves complete with Ping-Pong tables, shuffleboards and giant TVs. And I’ve been asked to create the antithesis of a man cave, a private retreat for a darling client (who also happens to be my daughter-in-law) using her favorite color: pink. In fact, that room may be my most feminine moment. She asked for a place that was all her own, a place to read a book or to have her girlfriends over for tea or a margarita. I worked on their elegant Spanish colonial home in the Turtle Creek area of Dallas with the wonderful California architect Marc Appleton. You can also see the influence of a fun trip to Marrakech with my son and daughter-in-law. 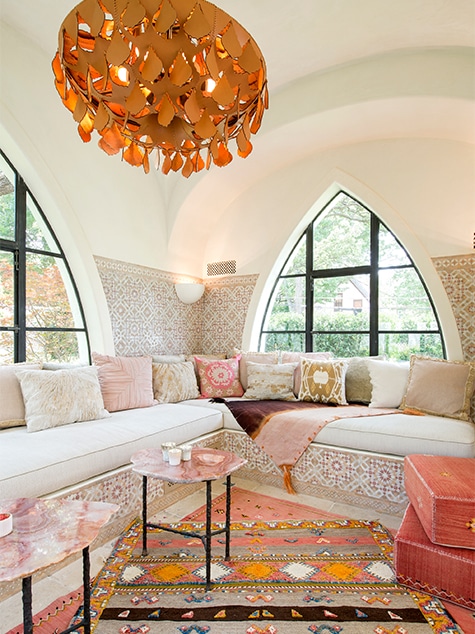 Inspired by a trip to Marrakech that Summers took with her son and daughter-in-law, this ladies’ retreat features plenty of pink, in the layered antique rugs as well as the cushion upholstery. Summers designed the side tables with brass bases and pink marble tops. Photo by Laura Wilson

“These women are smart and creative, they are life learners with interests beyond the home, and most of them love fashion, design, art and architecture.”

I guess I can’t deny it: Gender does play a role in many of my designs.

For my Legends talk, I decided to approach the topic from the perspective of the women I have worked with throughout my career, both clients and designers, who are all strong and accomplished. They are smart and creative, they are life learners with interests beyond the home, and most of them love fashion, design, art and architecture. For those who are married, the marriages are partnerships, but they all have an intense focus on their families and their homes. What follows are some of my favorite rooms for my favorite female friends.

Speaking of which, I want to refute the myth that it’s a bad idea to work with your friends: I have done projects with my best friends, and I’ve made great new friends along the way. 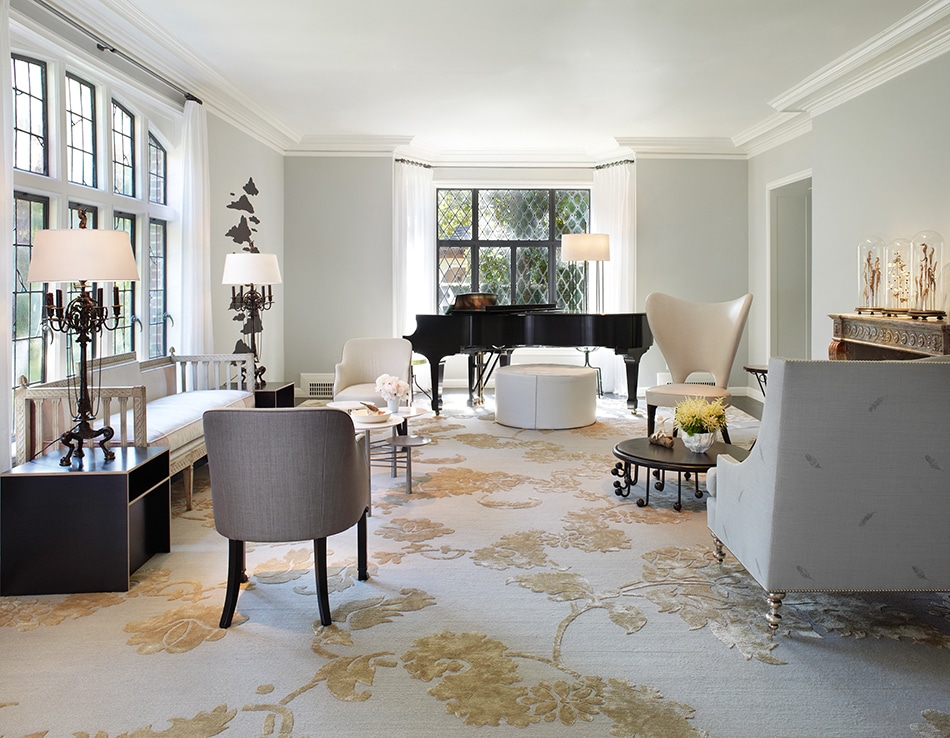 Summers designed this living room rug, which combines a bold pattern with a neutral palette. Arrayed on it are an Edward Wormley chair, a coffee table from Antony Todd and 1930 Axel Einar Hjorth occasional chairs. The room also features Kara Walker’s Untitled. Photo by Stephen Karlisch

I’ve worked on many projects with this smart lady over more than 25 years. I was surprised when she and her husband bought a very dark 1920 Tudor house on three-plus acres in Dallas — I had always thought they would build a contemporary home for their art collection.

Her first request was to brighten the space and then pull together an unexpected mix of furniture that reflects her fun, eclectic way of dressing. Taking a cue from her wardrobe, we created a quirky combination that ranged from Donald Judd tables to an antique Swedish sofa — a reminder of the family’s Swedish roots. We also blew up the scale of a more traditional rug pattern and let in the light.

This living room in an Antoine Predock–designed house features a pair of Twin sofas by Charles James and two Finn Juhl chairs. The modernist wingback chair is by Edward Wormley, and the sofa is by Christophe Delcourt. Photo by Dean Kaufman

Everyone has a breakthrough project, and working with this client and her architect, Antoine Predock, was mine.

In the late 1980s, my best friend took me along on a trip across the country looking for an architect and finally settling on Antoine. We’d been Dallas Museum docents together, and she asked me to design her home’s interiors, even though she could have hired anyone in the country. At the time, I was the director of exhibitions and funding at the museum, but I quickly grasped the opportunity to take on this exciting, career-changing project. We traveled, shopped tirelessly and had a ball.

In our search for furniture, we discovered a pair of settees by the couture designer Charles James. He made two pairs of these pieces for another female force, Dominique de Menil. We traced the second pair to de Menil’s daughter’s fashion studio in New York. She was using the settees more as pin cushions and a place to drop fabric. I made her an offer she could not refuse (enough to buy lots of pin cushions).

The nicest compliment I have ever gotten was when Antoine said I changed the way he thought about interior design. Antoine and my client jump-started my career, and she and I are still best friends.

A De Sede Nonstop sofa and T.H. Robsjohn-Gibbings coffee table sit opposite a pair of custom Charles Jouffre shearling armchairs. In front of the fireplace, an Achille Salvagni side table is paired with KGBL armchairs. Paintings in the room include Untitled, 2009, by Guillermo Kuitca and You’re Gonna Take a Walk in the Rain and You’re Gonna Get Wet, 2001, by Matt Conors. Photo by Eric Piasecki

Being an architecture fan, I was thrilled to be asked to update an iconic house built by the great Edward Durell Stone. The original owner paired T.H. Robsjohn-Gibbings with Stone to form a dream team that then created one of the most iconic homes in Dallas. The house was infamous for the floating dining room — many a guest was reported to have had an unfortunate slip after a few cocktails.

My darling client and her husband have brought renewed energy and fun to the house. The De Sede Non-Stop sofa is perfect for cocktails and conversation around the period Robsjohn-Gibbings Mesa coffee table. My client frequently rotates the art collection, refreshing the space. She keeps the home full of life. 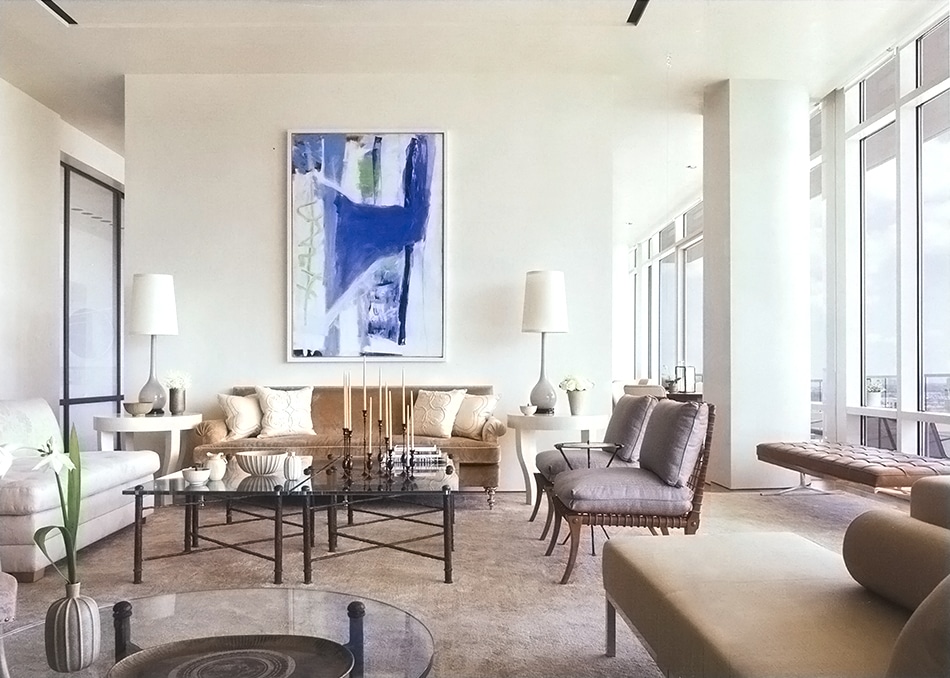 It takes a special client and a strong woman to segue from collecting and living with an abundance of antiques to adopting a more edited style. It usually happens gradually, with a second home, as in this case. A penthouse with sweeping views of the city and the sunny blue sky, this residence almost demands a spare interior. The softly classic modern furniture by Robsjohn-Gibbings and John Dickinson is as timeless as a Louis XVI bergère, and mid-century Swedish ceramics as pleasing as Chinese porcelain.

The clients love living in this open space, so next they called on me to update their more traditional home with contemporary art and furniture and a lighter palette.

In 1984, the award–winning architect Steven Holl was commissioned by a Dallas couple to create a jewel box for their books and art collection. It was named the Stretto House because of the architectural rhythms referencing music. Although the house was a design icon, it stayed on the market for several years because it was so specifically designed for the original client. It would take a special vision to repurpose the house for a family without changing a single piece of the original architecture — any alteration being sure to ignite the wrath of the architectural community across the country.

My client was just the right person to buy this house. She is one of a kind and a risk taker in all she does, from traveling with her husband and their young children to remote spots around the globe to running a family business to embracing brave causes in Dallas.

By hiring Dallas architect Max Levy, who originally worked with Holl on the project, my client was able to connect a glass gallery to a new three-bedroom wing for the family. This image shows a work in progress, as we are beginning to add family-friendly pieces that soften the museum-like atmosphere. When completed, the house will be a happy and comfortable home. 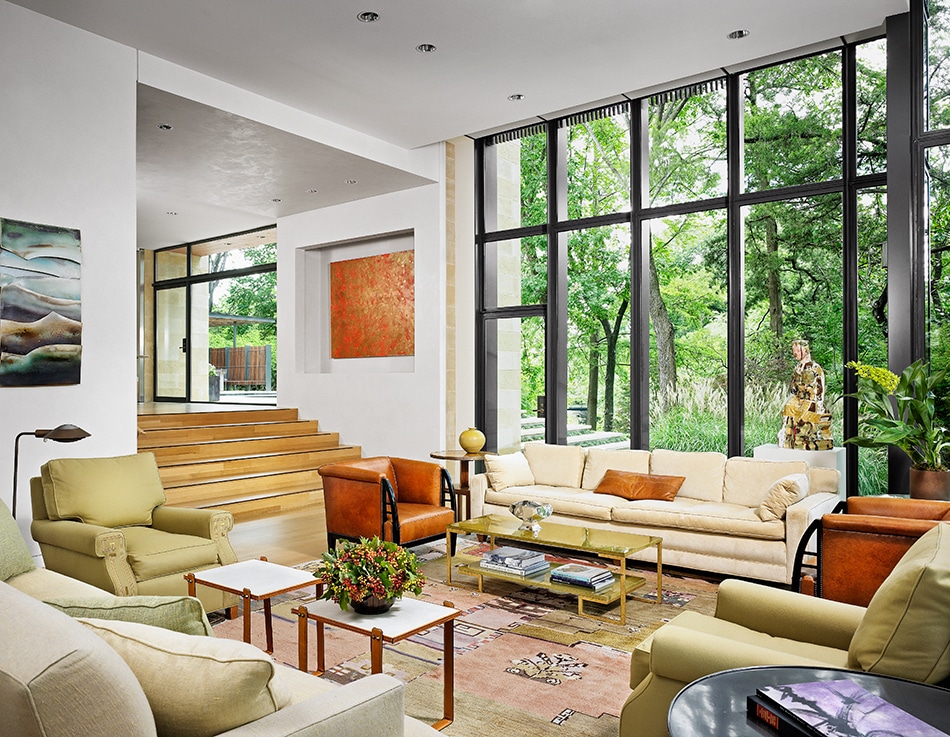 One of my oldest friends and clients was ready to move out of her family home and start anew. So, we hired a wonderful architect, Larry Speck from the University of Texas, and began a three-year project that will always remain one of my favorite design experiences.

My client is a leader in the Dallas community and sits on several boards, so I knew the house would be used for many functions in addition to serving as a family home. My goal was for it to reflect her wonderful personal identity. She fell in love with ceramics in college, thanks to the influence of such artists as Peter Voulkos, and now her collection fills the house. The work of many wonderful female ceramists, like Ruth Duckworth and Lucy Rie and Beatrice Wood, are displayed in custom cases. The search for more such treasures has taken us on wonderful travels. 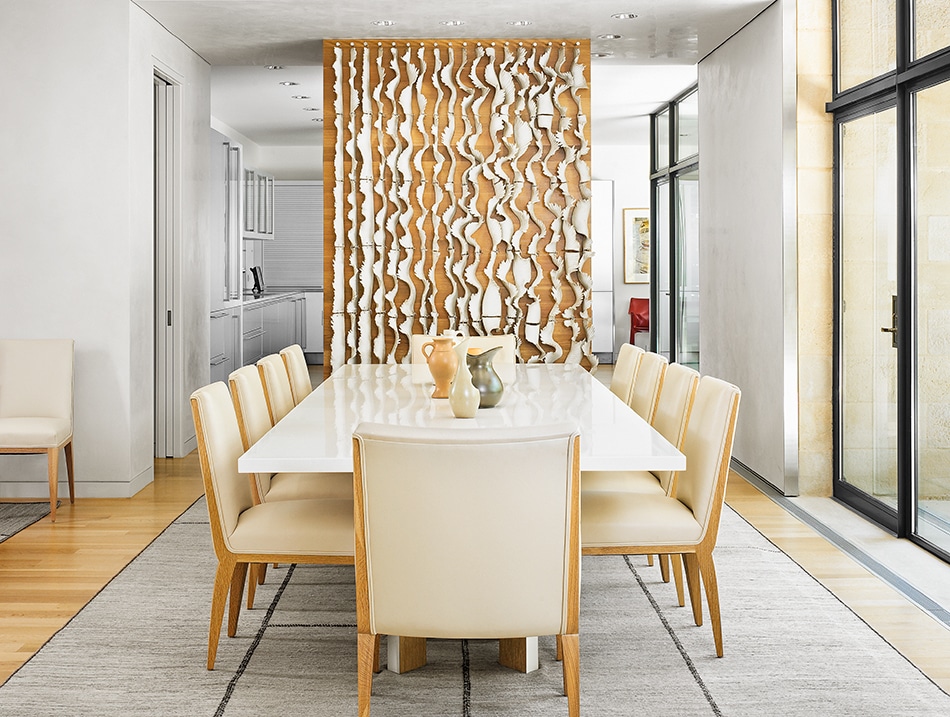 Anne Barrès’s 1982 Vibration hangs at one end of a pair of custom dining tables with lacquered tops and cerused oak and lacquered legs. Mattaliano Flea Market chairs surround the table. The custom Soumak carpet is from FJ Hakimiam. Photo by Timothy Hursley

At the end of the constantly used dining room are ceramic ribbons, a 1982 piece called Vibration by French ceramicist Anne Barrès. Behind the sliding walls are my client’s dozens of sets of china, used to create the fantastic, ever-changing table settings that she has become famous for.

Finally, in addition to my strong female clients, I treasure my relationships with the creative women I have worked with over the years — women who design and produce amazing furniture and textiles. I have to pay particular tribute to a fantastic French designer who has been creating sleek, modern furniture since the 1950s: Maria Pergay, at 84, continues to make pieces, from her iconic stainless-steel benches and consoles to a table with cast-bronze legs and slice of ancient hardwood under the surface, which I first saw in the Fendi store in Paris. She is bright and energetic and still creating original fresh designs.

So, I salute women who work in design, women who love design, clients and patrons — all women who create their homes and lifestyles.