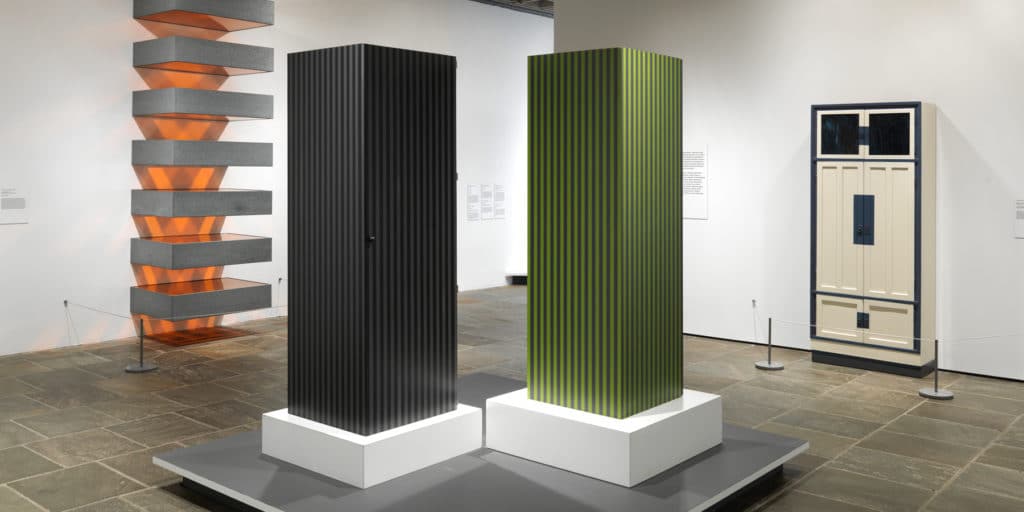 The Met Breuer retrospective celebrates 60 years of the artist’s career working in diverse creative fields and his contributions to the little-understood but influential Memphis design movement, which he founded. 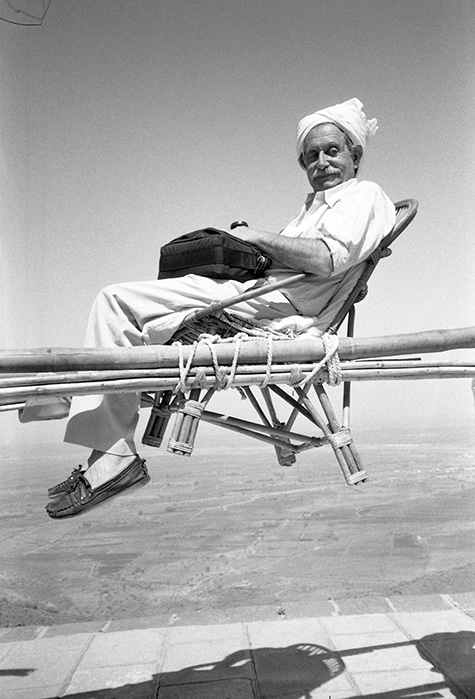 In the year of his centenary, and a decade after his death, the Austrian-Italian mega-talent Ettore Sottsass is finally having his New York moment with a brilliantly conceived retrospective at the Met Breuer. Covering 60 years of the maestro’s prolific career, “Ettore Sottsass: Design Radical” (on view through October 8) reveals not only the stunning breadth of his creative output, encompassing architecture, furniture, electronics, jewelry, ceramics, glass, paintings and photography, but also how all this work contributed to the Memphis Group, the little-understood yet seminal design collective he launched in 1981 and that briefly became a worldwide media phenomenon.

The first design show to be presented by the Met Breuer, it is the brainchild of Christian Larsen, the Met’s associate curator of modern design and decorative arts, who joined the department two years ago. No sooner had he arrived than he was asked to pull together an exhibition that honored the Breuer’s mandate to put art and design in a global and historical context and, in so doing, draw on the Met’s vast trove of objects spanning five millennia. “I knew at once that Sottsass would be my subject, as few designers have his heft,” Larsen says. “He’s fascinated me since 2000, when I started working at MoMA. My first task there was digitizing the entire design collection, so I got to know him intimately, and already his objects sprang off the shelves. I couldn’t account for the life force of his pieces.”

What Larsen didn’t realize then was that a key to understanding the potency of Sottsass’s designs lies in the amusing twist embodied in his name, which derives from Sotto il sasso sta l’anguilla, an expression from the designer’s native Dolomites meaning “under the rock is an eel.” In his introductory wall text, Larson writes that the phrase “suggests that hidden wonder awaits discovery in common things — the essence of Sottsass’s designs.” But the saying also insinuates the hidden power of the subconscious and its symbols. 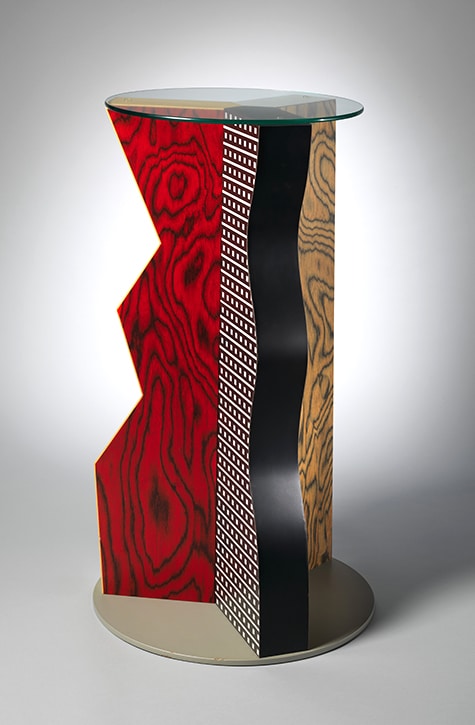 “Sottsass transformed the persona of the industrial designer,” says Marc Benda, of the New York gallery Friedman Benda, which launched its contemporary program with a Sottsass show in 2007 and has presented an exhibit of his work almost every year since. “Here was a very successful industrial designer who was also doing monumental design work and limited-edition pieces that needed to be shown in a gallery context.”

Beginning in the 1950s, that gallery work, especially in the realm of ceramics, enabled Sottsass to freely explore shapes, colors and textures in a way that was at once formative and profound. As the exhibition demonstrates, reverberations of his research are apparent in his furniture and other industrial designs. Although it is not on display, they can even be detected in the Elea 9003, the groundbreaking all-transistor mainframe computer he designed for Olivetti in 1959. Indeed, it can be argued that without Sottsass and the communicative power he brought to all his high-tech objects, plus his insight into how design and technology transform human experience, today’s digital culture might never have been born. As Larsen sees it, the blurring of art and design began with Ettore Sottsass.

The triumph of the exhibition is in the rich and imaginative way it contextualizes the designer’s achievements, juxtaposing his creations both with works that influenced him and with others that he inspired. When the doors of the elevator open onto the exhibition floor, one is immediately confronted by Sottsass’s Yellow Furniture (1988–89), a cruciform cabinet made of rare woods and gilded knobs that salutes photos and plans of the great proto-modernist Otto Wagner‘s Steinhof Church, in Vienna; and Studio Job’s Chartres (2009–12), a bronze and 24-karat-gold-leaf cabinet representing a toppled version of the famed cathedral, part of a series by the subversive design duo that literally upends architectural icons and their symbolic hierarchies. “It’s the whole twentieth century coming into the twenty-first,” declares Zesty Meyers, of R & Company, who has dealt in Sottsass’s work since establishing the gallery 20 years ago. “The show is going to change the design world, the very history of design.” 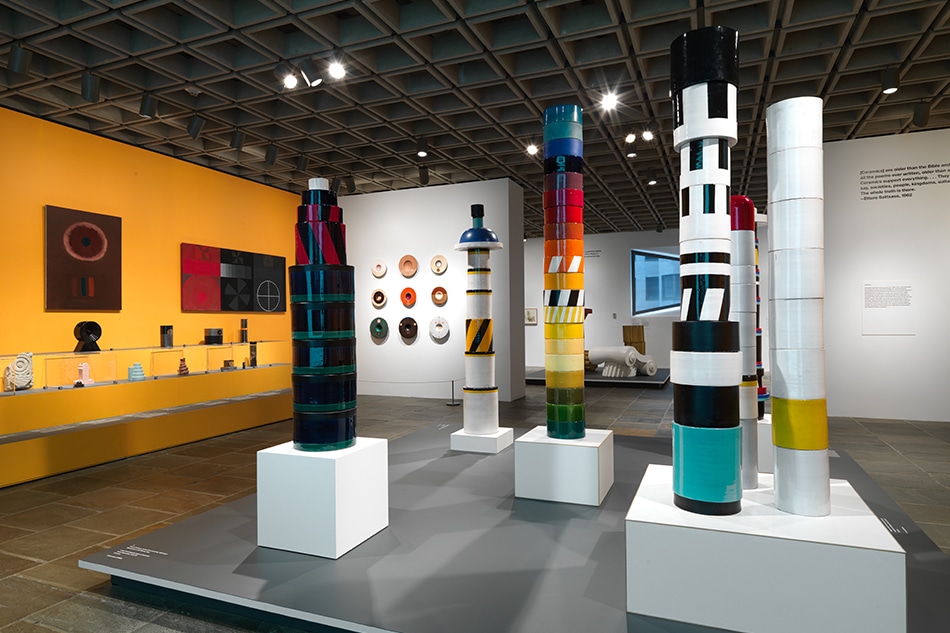 An array of Sottsass’s works inspired by primitive and spiritual objects includes his ceramic Totem forms and the round disc Offerings to Shiva. Photo by Anna Marie Kellen 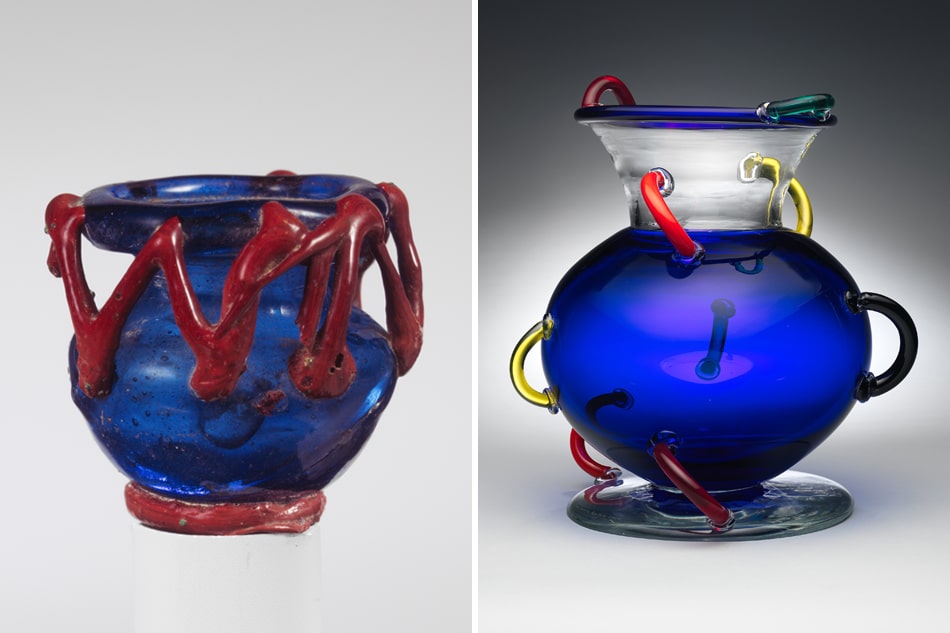 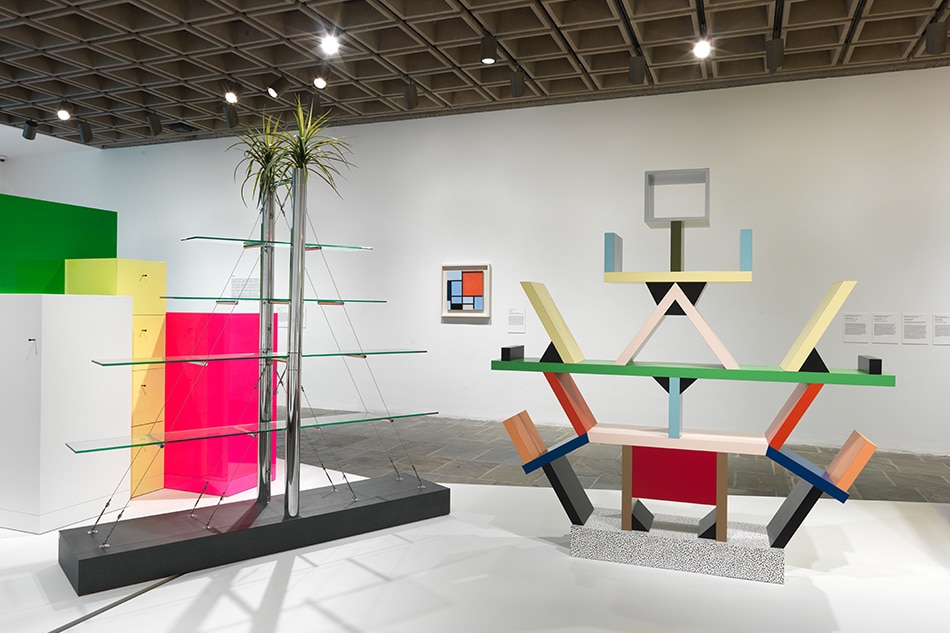 Sottsass never shied away from color, as evidenced by his Carlton room divider from 1981 (right). His much younger Memphis Group compatriot Andrea Branzi takes a more subdued approach in his wire-and-glass suspended-shelving system (left). Photo by Anna Marie Kellen 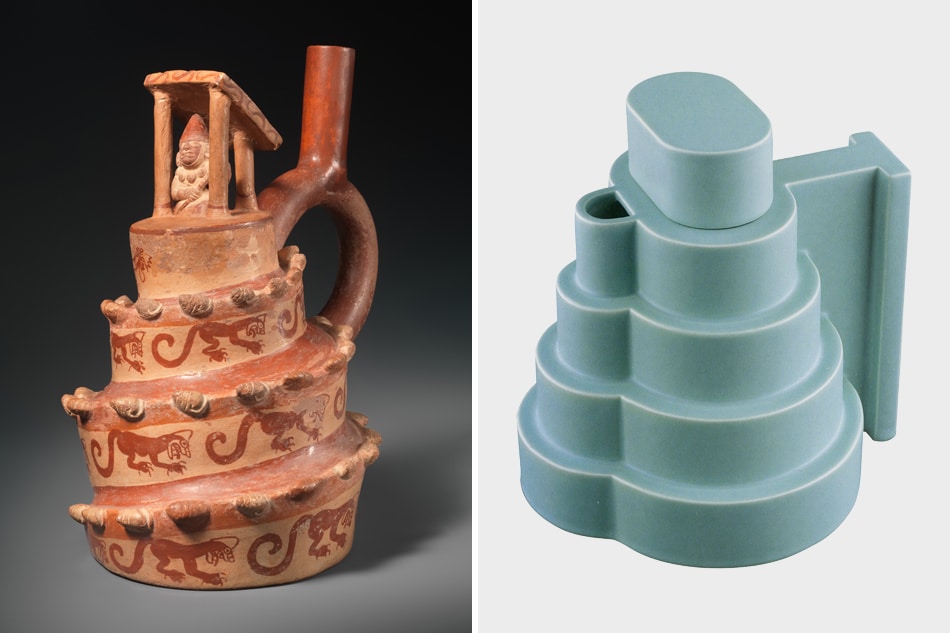 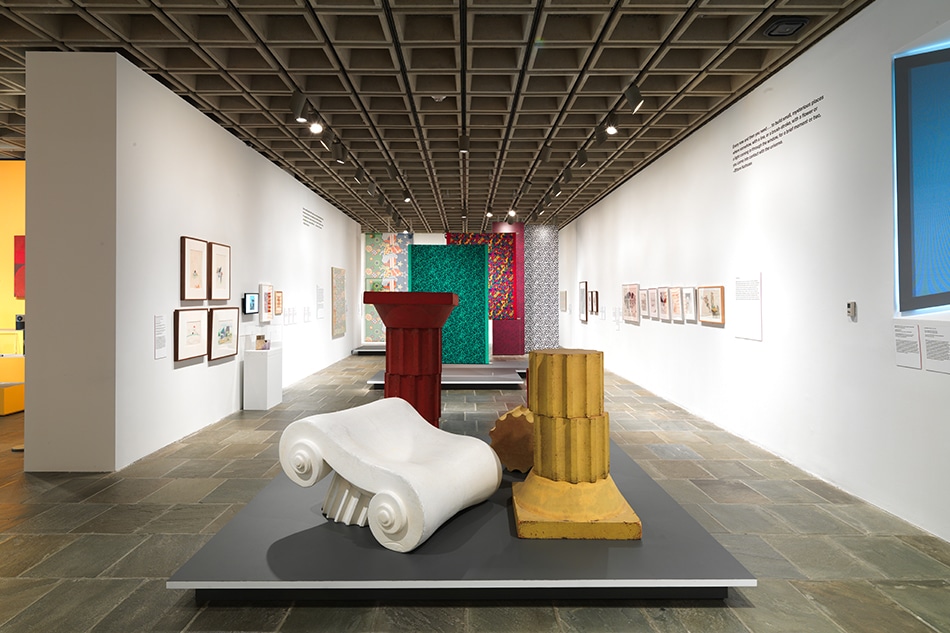 Colorful works in polyurethane foam and latex — including the Capitello chair, 1971, by Studio 65 (Franco Audrito and Piero Gatti) and Doric Temple, 1971, by Lapo Binazzi — illustrate the Memphis Group’s fascination with Pop art and classical embellishment. Photo by Anna Marie Kellen 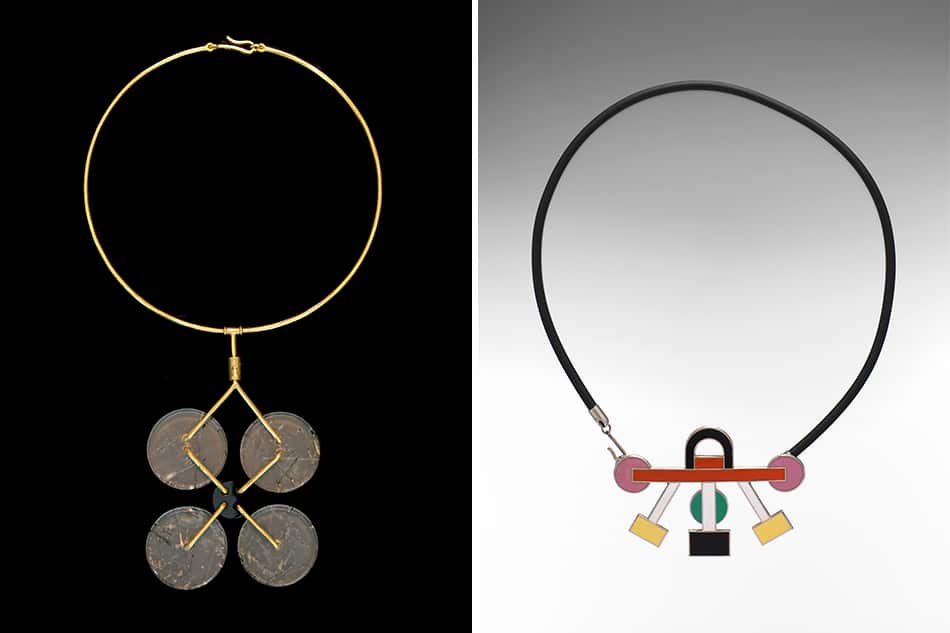 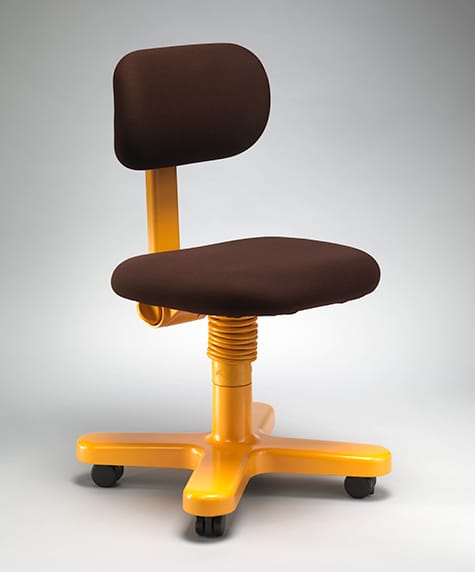 Opening the exhibition with a tribute to Otto Wagner is in itself upending history, as Sottsass is deeply associated with postwar Italian design. Yet his beloved architect father, with whom he worked early in his career, trained in the tradition of Wagner, a member of the Viennese Secession. And out of that group’s experimentation in art and design emerged the Wiener Werkstätte, which in turn influenced the Bauhaus, perhaps the most seminal movement in early modern design. Larsen draws exciting links between the visual preoccupations of those groups, especially in regard to black-and-white patterning, and Sottsass’s own work and that of members of the Memphis Group and his young admirers today. Through such connections, says Meyers, “you see how Sottsass pushed [design] forward. That is one of the greatest accomplishments any designer can have — tying the past with the present to take you into the future.”

Although modernism was part of his heritage, Sottsass never embraced its ahistorical claims. In his view, its use of colors, shapes and patterns was not new but ancient and archetypal. In his late 20s, Sottsass explored the design of the East, especially traditional Japanese architecture, with its dramatically different domestic configurations, and then looked west, to the bold promise of America. Shortly after his father died, in 1956, he spent a few months working in the New York studio of George Nelson, forming a close friendship with the gifted designer and writer. “I learned that architecture and design was not about being more or less …‘original’ or ‘creative,’ ” Sottsass later wrote, but “that it was about understanding where society was headed.” 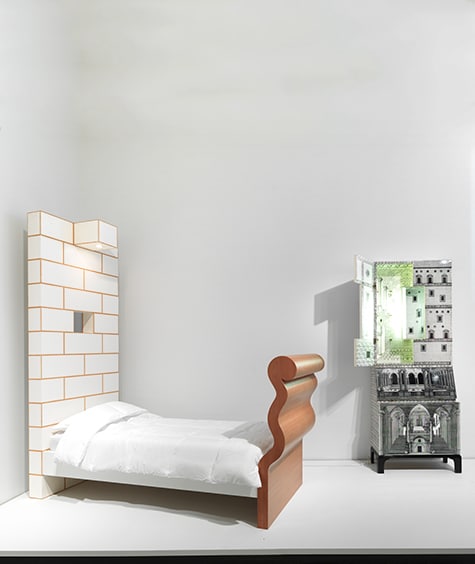 Sottsass’s Societies on This Planet (La Società del Pianeta) bed, 1992, stands next to Architettura, a collaboration between Piero Fornasetti and Giò Ponti that was designed in 1951 but not manufactured until 1975. Photo by Anna Marie Kellen

Larsen illustrates Sottsass’s fascination with the ways in which humankind recycles and reinvents design archetypes by showcasing ancient amulets, reliquaries, lingams and stupas from the Met’s collection, along with the work of such giants of art and design as Adolph Gottlieb, Frank Stella and Frank Lloyd Wright and such rising stars as Millie Behrens and the Canadian duo known as Oeuffice. There is a special section devoted to his glass pieces inspired by  Navajo kachina dolls, which he first spied in George Nelson’s home. And aficionados will be thrilled to see five brightly colored, towering totems from Sottsass’s landmark 1967 Milan gallery show, titled significantly “Menhir, Ziggurat, Stupas, Hydrants & Gas Pumps.” In these ceramic works and his strikingly patterned and monolithic Superboxes, also from the late 1960s, which were designed to stand in the middle of the room and store all the possessions of the new “youthquake” generation, you can clearly see visual tropes that would effloresce into Memphis.

The exhibition closes by reaffirming Sottsass’s place in the proud tradition of modern Italian design. The last piece of his on display — shown beside works by two giants in that tradition, Giò Ponti and Piero Fornasetti — is the 1992 Societies on This Planet bed. A slender if ornate pear-wood and laminate berth, it’s expansive in its references, alluding to the tower of Rapunzel; the neoclassical flourishes of Ponti; and the triclinium, the chaise longue ancient Romans reclined on when dining. By this point, you might wish to collapse in that bed, overwhelmed by the kaleidoscopic new vision of design history that Larsen has presented.