California Modernism Gets a Refreshing Update from EYRC Architects 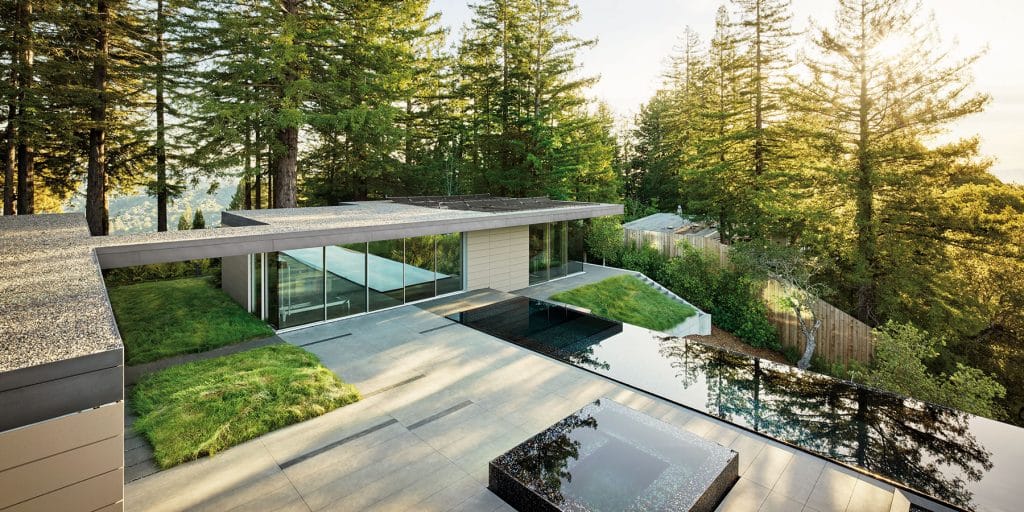 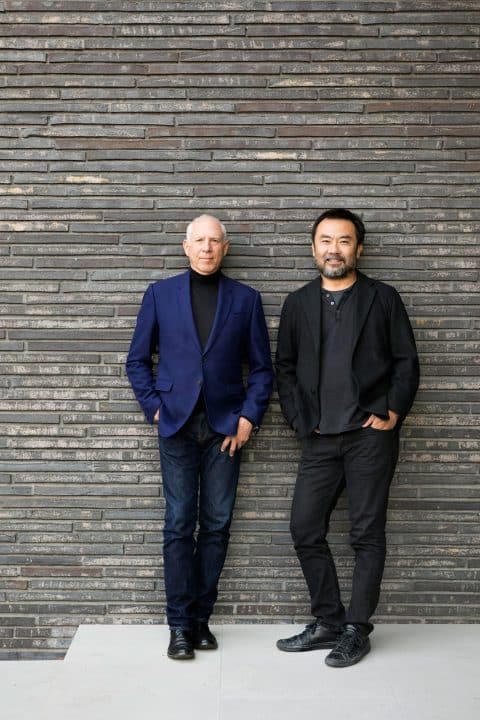 An ecotone is a place of transition between two biological communities. In Marin County, California, Steven Ehrlich and Takashi Yanai were asked to design a house on an ecotone — a large site overlooking Mount Tamalpais and San Francisco Bay. “The north slope is foggy and moody, with giant redwood trees,” reports Ehrlich. “The south is entirely different, with bright sun filtering through stands of California oaks.”

The architects made material choices that acknowledge this dichotomy. On the north side of the house, they used ruddy terracotta tile, a natural material that complements the redwoods. On the south side, they used mostly glass, in thin steel frames, to take advantage of the views. Together, they form a house that melds a rustic Northern California sensibility with mid-century modernism — an architectural ecotone.

But the house is just one element in a landscape (on which Ehrlich and Yanai collaborated with the San Francisco firm Surfacedesign) that also includes a pool and hot tub with infinity edges, their mirror-smooth surfaces reflecting forests and sky. The home’s “most important feature,” Yanai says, referring to the setting, “is something you can’t design.” 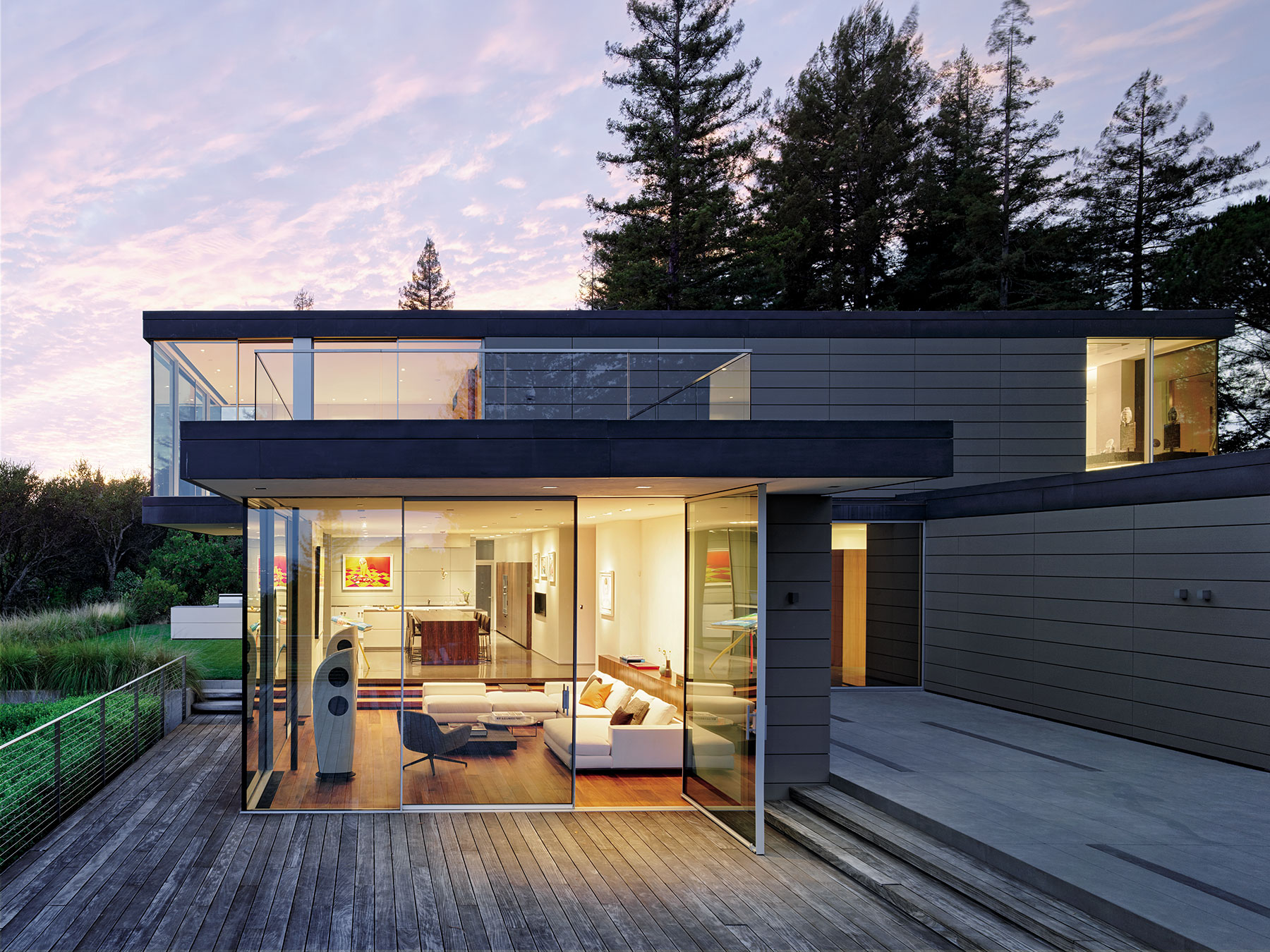 Their sensitivity to site is one of the qualities that have helped the duo’s firm, Ehrlich Yanai Rhee Chaney Architects (EYRC), rise to the top ranks of West Coast residential architects, alongside such names as Aidlin Darling, Olson Kundig, Bohlin Cywinski Jackson and Marmol Radziner. EYRC houses tend to lack show-offy features. In the introduction to the firm’s new monograph, Outside-In: New California Modernism (Monacelli), San Francisco Chronicle columnist Zahid Sardar quotes the neoclassical architect Chester Holmes Aldrich as remarking, “To say new things, it is not necessary to invent a new language.” Which is apt: There is surprisingly little new language in Ehrlich and Yanai’s projects — just the language of modernism employed eloquently.

And concisely. Except for an enormous residence in Dubai, most of EYRC’s structures are modest in size. One of them, a ranch makeover in Pacific Palisades, is just over 2,000 square feet. But small doesn’t mean low impact. In their redesign, Ehrlich and Yanai turned a warren of small rooms, a waste of spectacular ocean views, into one great room with a 40-foot-wide wall of glass. (Sliders have gotten bigger and easier to operate, in part because of the firm’s collaborations with manufacturers.) 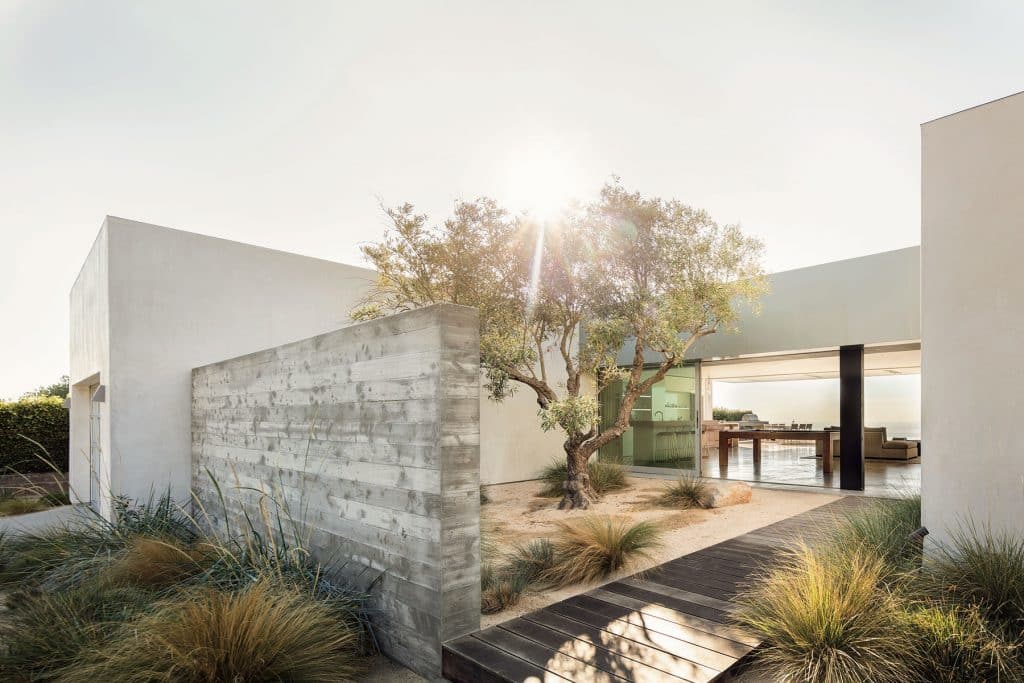 EYRC renovated this Pacific Palisades home for a professional with grown children who “was ready to invest in a personalized indoor-outdoor pavilion for entertaining family and friends, a tranquil refuge from her career in social justice.” In the courtyard, a mature olive tree is framed by a board-formed concrete wall.  Photo by Darren Bradley

By creating rooms that extend outdoors, the architects reduce the need for enclosed square footage. Asked whether he ever persuades clients that they require less room than they thought, Yanai says, “I have that conversation all the time.” He adds that, if a client agrees to go smaller, “our fee might be slightly less, but we think preserving outdoor space is important.”

Another EYRC house, in Laguna Beach, was subject to an 11-foot height limit that the clients hadn’t known about when they bought the ocean-view property. Ehrlich and Yanai built a sprawling, low-slung H-shaped structure with a kitchen in the middle that has sliding glass walls on both sides. “The owners wake up each morning and slide everything open,” says Yanai, noting that the kitchen is thus “essentially, a covered outdoor space.”

Homes by Ehrlich and Yanai 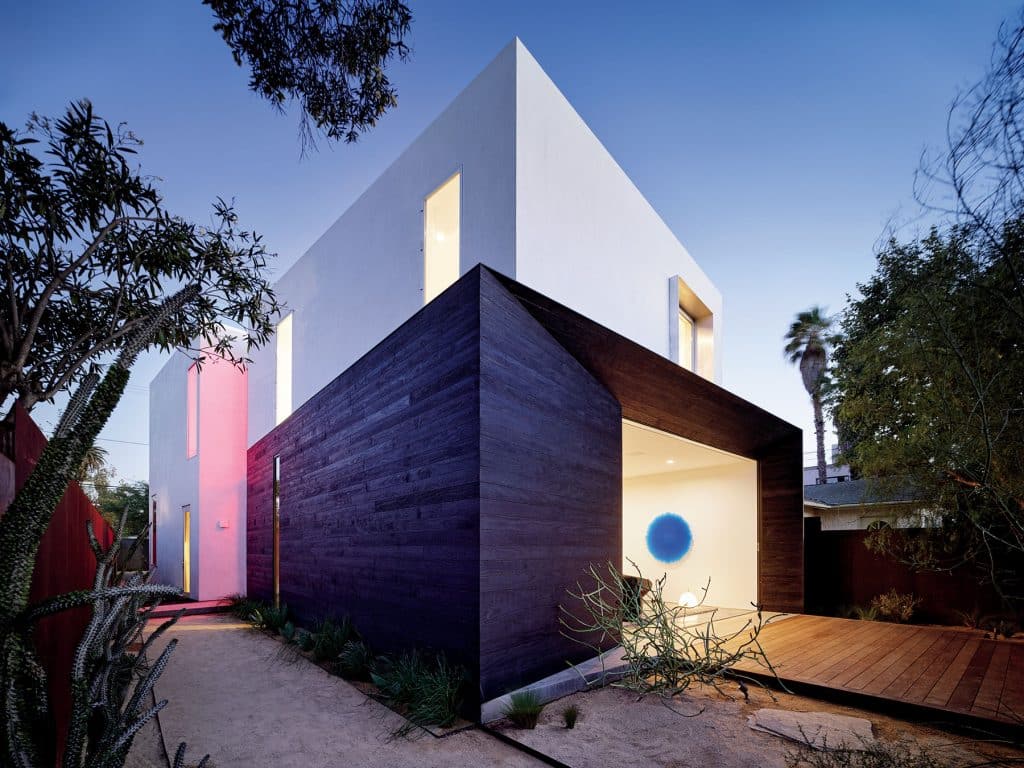 This Venice, California, home, was a collaboration between Ehrlich, Yanai and their client, artist Johannes Giradoni, who wanted his home to be an immersive art experience. The structure comprises three two-story living blocks, with the upper level rendered in smooth white stucco and the lower level in black shou sugi ban. 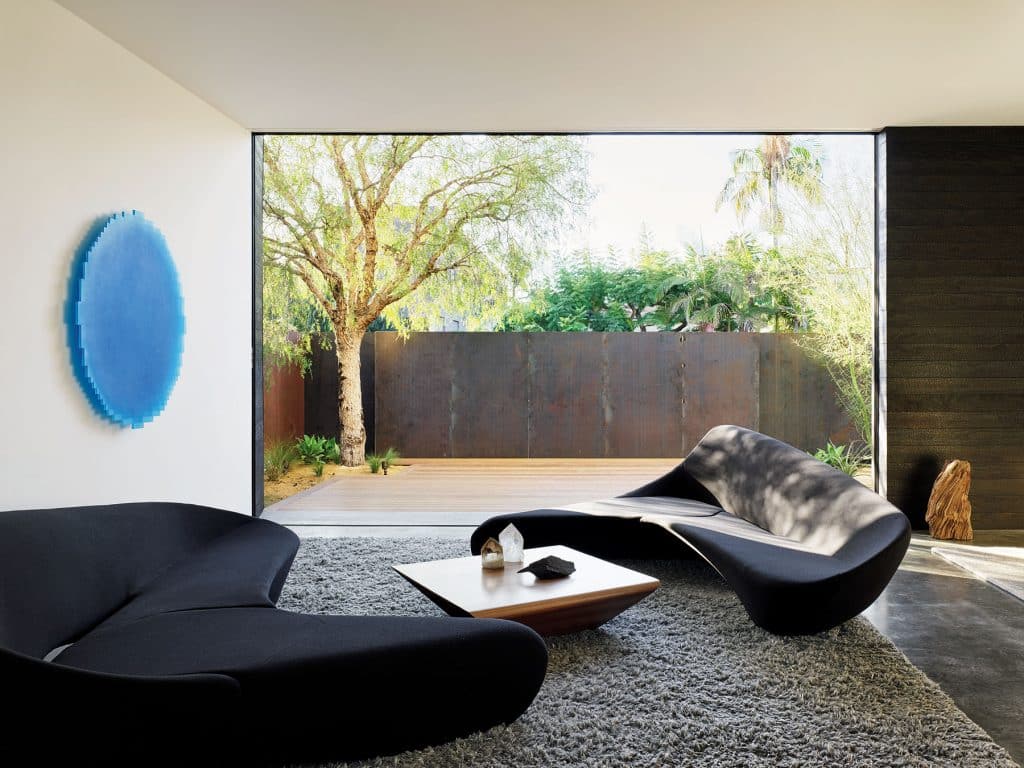 The living spaces of the home, located about a mile from the beach, open to private outdoor areas. 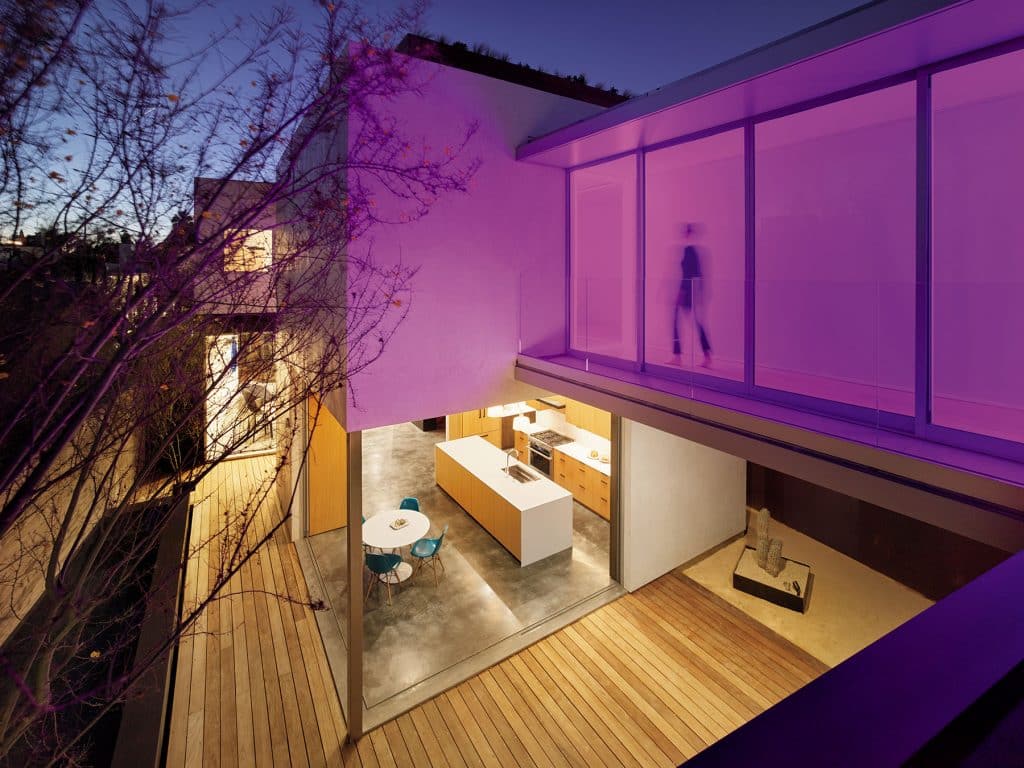 The structure’s component blocks are connected by Girardoni’s artwork Spectral Bridge, which includes an “art lounge” complete with sound baths and colored light. 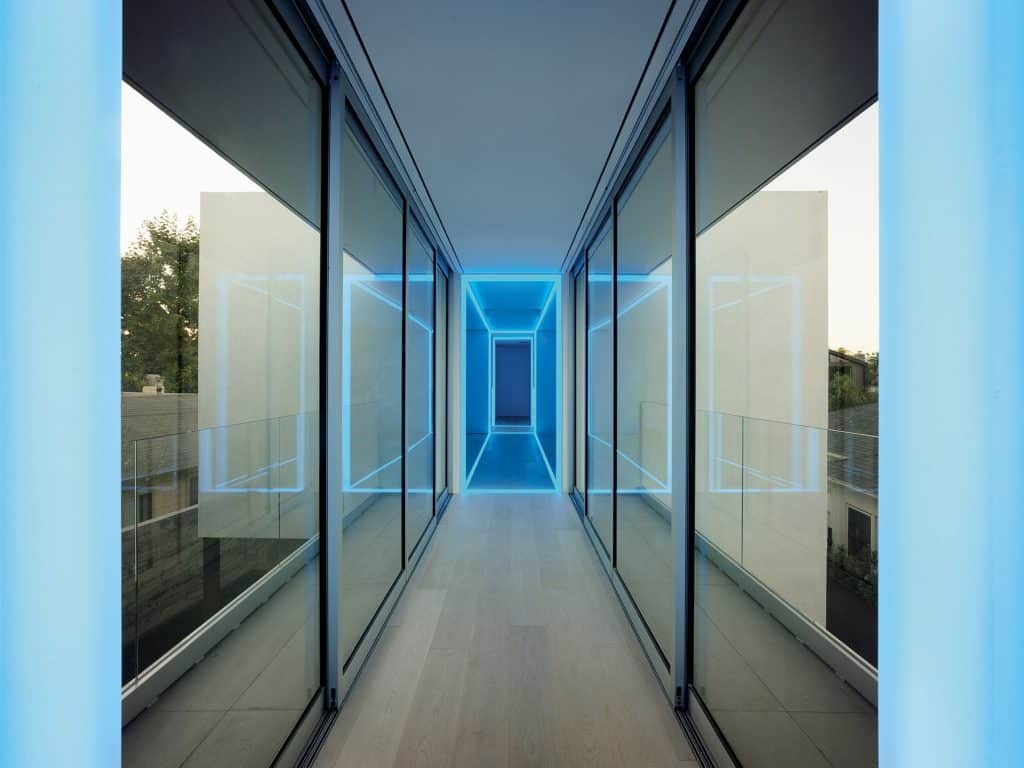 Spectral Bridge, operated by a program timed to sunrise and sunset, moves through color sequences throughout the year. 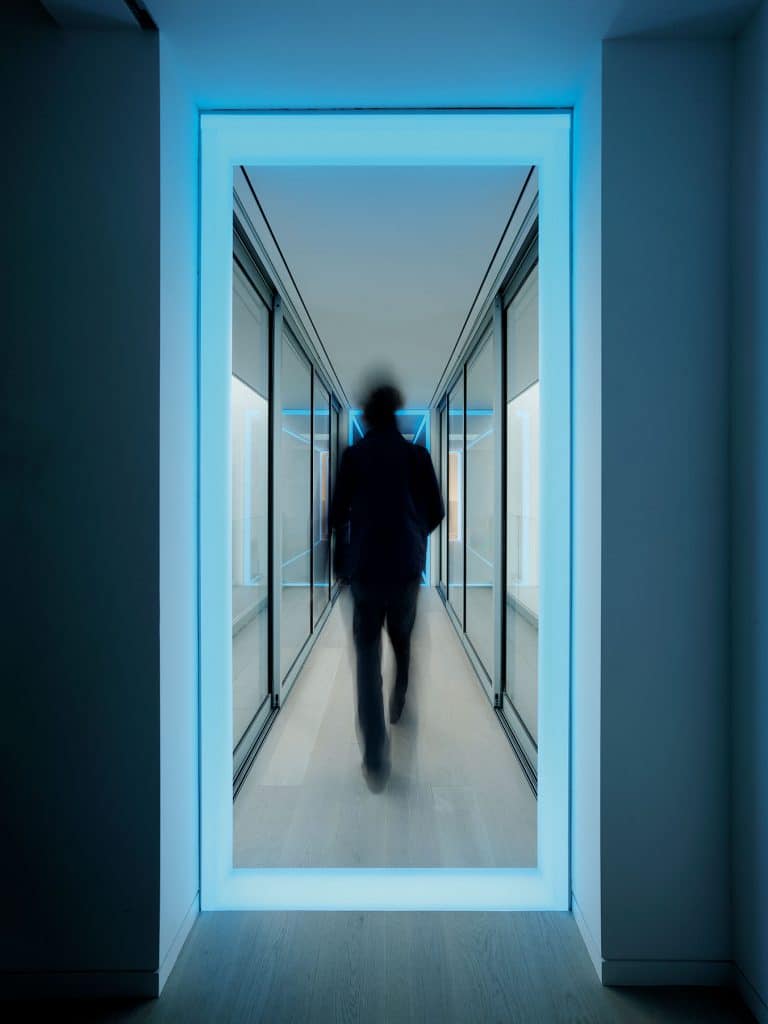 Visitors experience Spectral Bridge as “a series of spaces defined by lines of light, volumes of color and ambient sound,” according to the book.

The firm was founded by Ehrlich in 1979, after he returned from six years in Africa (serving in the Peace Corps in Morocco and then teaching architecture in Nigeria). But what really launched his career, he says, was a 1982 story in the New York Times about an addition he designed to a Santa Monica beach house by Richard Neutra; the author credited him with fulfilling Neutra’s vision. A few years later, Ehrlich’s Japanese-inflected Schulman house, in Brentwood, won a slew of awards. At the time, Yanai was working at the Japanese architecture magazine GA. The coverage of the Schulman house helped inspire him to go to architecture school and later seek a job with Ehrlich. “It spoke to me,” he says.

While Yanai runs the firm’s residential studio, Ehrlich is involved in all three of its practices: residential, commercial and institutional. (Long a sole proprietorship called Ehrlich Architects, the firm became Ehrlich Yanai Rhee Chaney Architects in 2015.) EYRC’s broad range of work allows a kind of cross-fertilization: Research done for commercial and institutional clients makes the homes more efficient, while the explorations into home design can bring warmth and intimacy to larger projects. 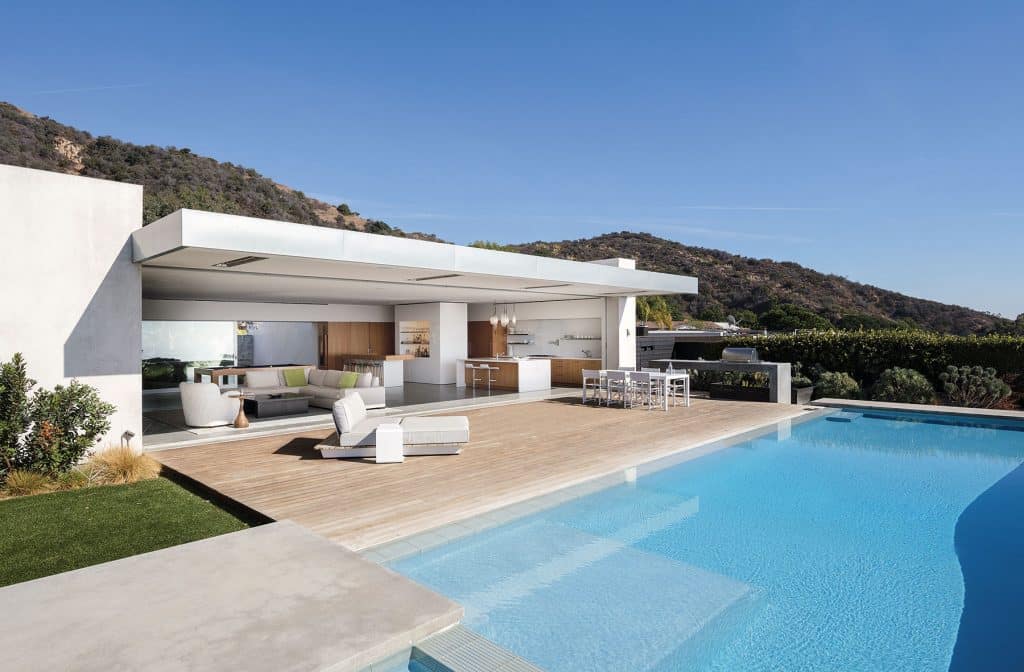 The firm removed the walls separating the family, living, dining and kitchen areas to create a single great room with ocean views.  Photo by Darren Bradley

The two partners both use courtyards, but for different effects. Writes Sardar: “Ehrlich thinks of a Moroccan courtyard as the center of daily life, while the Japanese courtyard Yanai alludes to is part of a procession, intended to be viewed in moments of self-reflection.” The Moroccan version appears alongside a brick-and-bronze house in Palo Alto; the Japanese type in the entry sequence of a house high up in Pacific Palisades.

When there isn’t room for expansive courtyards, the partners sometimes create tiny ones. A house they designed on an infill lot in Santa Monica, for instance, has neighbors on both sides. The architects constructed a closet-sized courtyard to bring in a little bit of sky and light and air without sacrificing privacy. It could be in Japan or Morocco, in a meditation center or in an exhibition of James Turrell sky spaces. 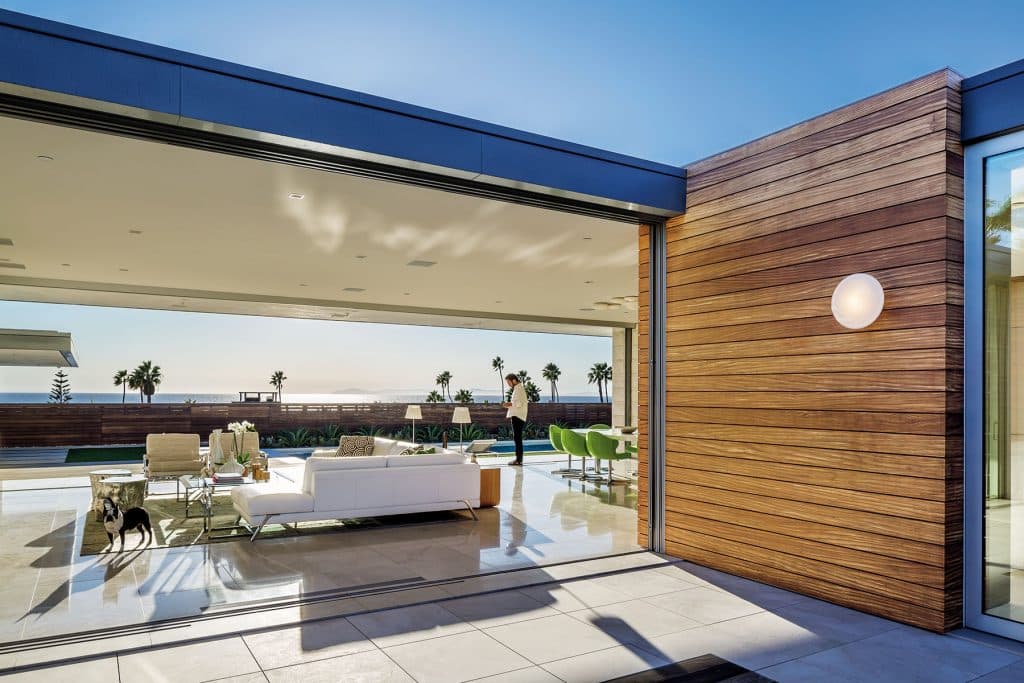 A California couple with two grown sons hired EYRC to create a home that fit their casual beach lifestyle, enabled them to entertain and highlighted their art collection. Sliding glass doors open the indoor living space to the pool area.  Photo by Nico Marques

The book is well illustrated with photographs (a plurality of them by Matthew Mailman) and well designed; in fact, the images and layouts are as straightforward as the 10 houses featured. The volume includes plans, sections and elevations, welcome in any architecture book. It also contains renderings of houses that are not yet complete, some of which are likely to show up in the firm’s next monograph. (Two finished structures in this book were seen as renderings in the last one.) 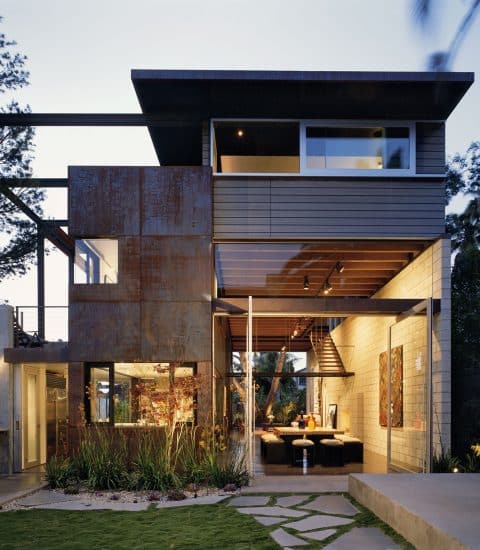 Ehrlich’s own home in Venice, California, designed in 2005, features a courtyard space.  Photo by Erhard Pfeiffer

The most unusual of the recent projects was a collaboration with the installation artist Johannes Girardoni. Girardoni, who was also the client, wanted a house that showcased the kind of work he does with light. Ehrlich and Yanai devised a compound of three two-story volumes linked by a glass bridge framed by LEDs, which put on a yearlong “performance” of colors timed to sunrises and sunsets. (Artwork and home are both named Spectral Bridge.) From different vantage points, the span appears to be a glowing physical volume or an invisible container sketched in light. “The house blurs not only the boundary between indoors and outdoors but also the boundary between architecture and art,” says Ehrlich.

Like most of the projects in the book, it is an homage to the California modernism of the mid-20th century. But if these houses resemble those of Neutra, Rudolph Schindler and other late-greats, they also contain the newest creature comforts. Despite their apparent simplicity, says Ehrlich, “you don’t have to be a monk to live in them.”