All in the Family

Ferruccio Ferragamo's last name may be synonymous with chic leather shoes, but his willingness to diversify the family business has kept the company relevant — and highly profitable — as it evolves stylistically. 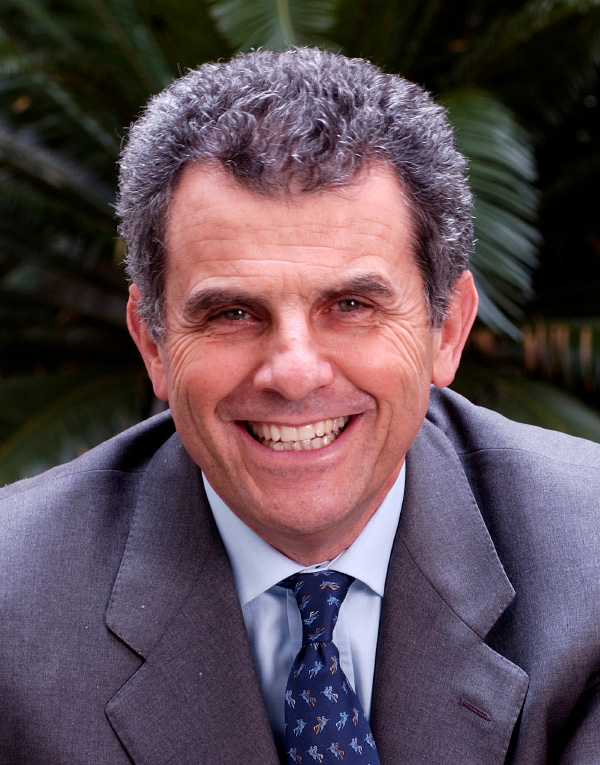 April 10, 2013While overseeing its remarkable expansion, Ferruccio Ferragamo has preserved the integrity and spirit of the fashion house his father, Salvatore, founded 85 years ago.

One of the first things you notice when you meet Ferruccio Ferragamo, the dapper chairman of the fashion empire that bears his family name, is that the silver-haired 67-year-old still refers to his parents as “Mommy” and “Daddy.” It’s a seemingly small detail, but it underscores the fact that this multinational luxury brand — which today counts more than 600 stores in 96 countries around the world — very much remains a quintessentially family-owned and -operated business. This despite Ferragamo’s having taken the company public in June 2011, with a successful offering on the Milan Stock Exchange of about 20 percent of its shares.

As it turns out, these family roots run deep and wide, too. When Ferragamo’s Florentine father — company founder and famed “shoemaker of dreams” Salvatore — died in 1960 at the age of 62, he left behind six children between the ages of 2 and 17, and a wife, Wanda, who was only 38. (Now 91, she still comes into the offices every day, reads the morning papers and, in Ferragamo’s words, “is the big boss;” she recently expressed interest in visiting New York again, when the weather gets better.)

Back in 1960, “Mommy had no idea. The business, the shoes — she never was involved with it. She was at home looking after the children, making the children,” Ferragamo recalled recently over lunch in one of the exquisitely decorated piano nobile rooms of Florence’s frescoed and crystal-chandeliered Palazzo Spini Feroni, the company’s 13th-century headquarters on the banks of the Arno River. 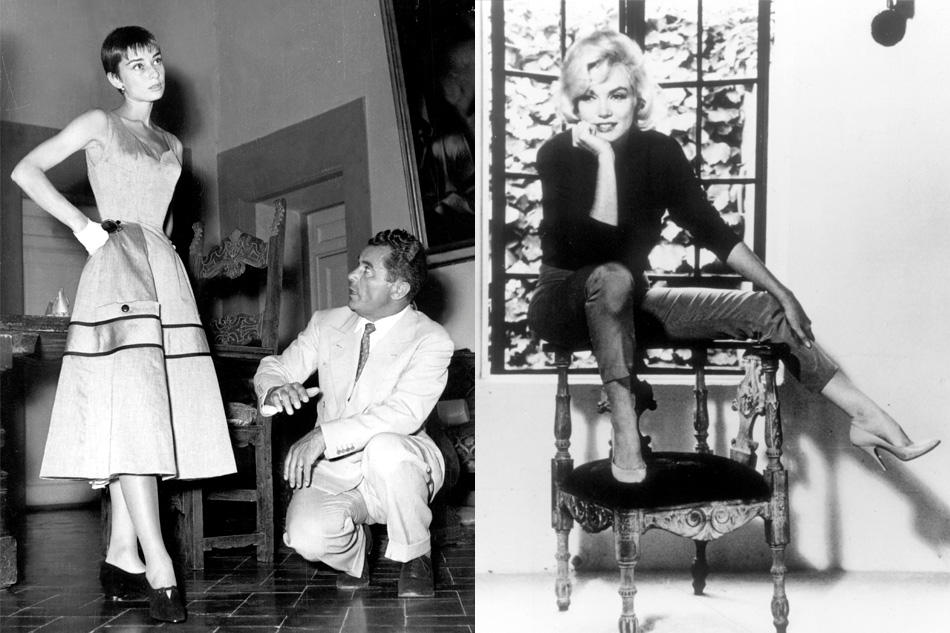 Salvatore Ferragamo (crouching) titled his 1957 memoir Shoemaker of Dreams, but he could have just as easily called it Shoemaker to the Stars, as his fans Audrey Hepburn and Marilyn Monroe could attest. 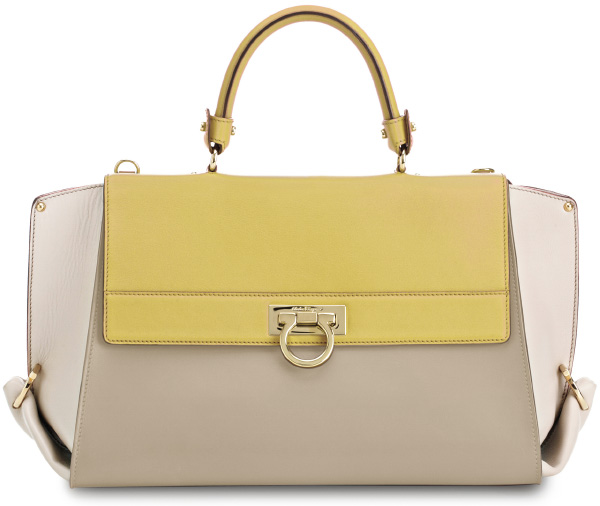 The brand’s classic Sofia bag, in a Spring/Summer 2009 iteration.

“And so Mommy, she made an important decision then, which was to continue Daddy’s dream, Daddy’s dream that he wrote two years before in his autobiography: It was to dress his customers from the shoes to the head. And Mommy, with that mission, she did it.”

Did she ever. At the time of Salvatore’s death, the company that he’d started in Florence in 1927, after more than a decade in Los Angeles creating shoes for some of Hollywood’s biggest stars, still focused only on women — and even then almost exclusively on their feet. But under Wanda’s leadership, and with the advice of a few trusted associates, as well as the efforts of the soon-to-come-of-age Ferragamo children, the company expanded, and at an epic pace. “Mommy made the bridge between my father and all of us,” Ferragamo explains. “And as we young ones joined the business, new lines of products were starting: the handbags, the ready-to-wear, the silk, the men’s line, the men’s shoes.”

By the time Ferragamo became CEO in 1984 — having by that point served the company in a variety of capacities, both high and low, starting from the days that his father made a young apprentice out of him when he was only not much older than 10 — the company had delved deeply into all of these categories, showing women’s ready-to-wear on a regular basis, expanding sales into Japan and opening its New York flagship on Fifth Avenue. 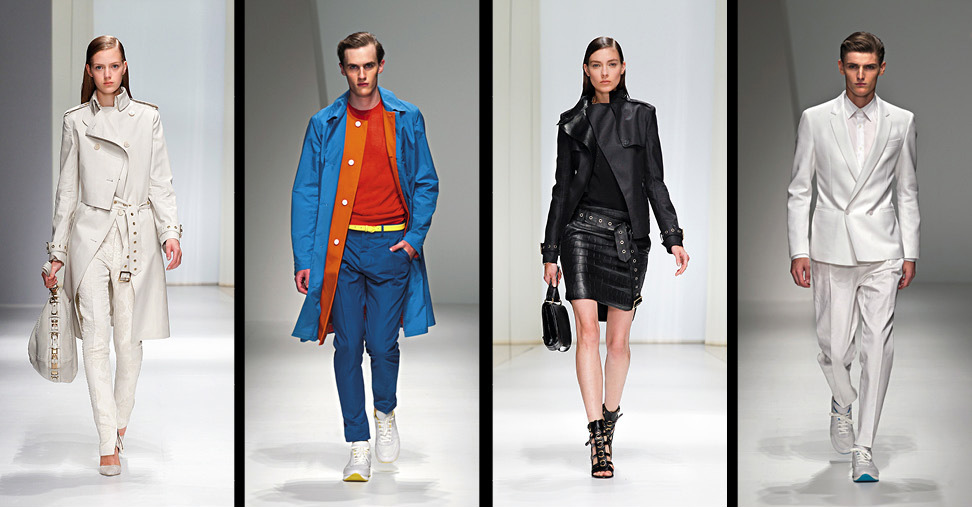 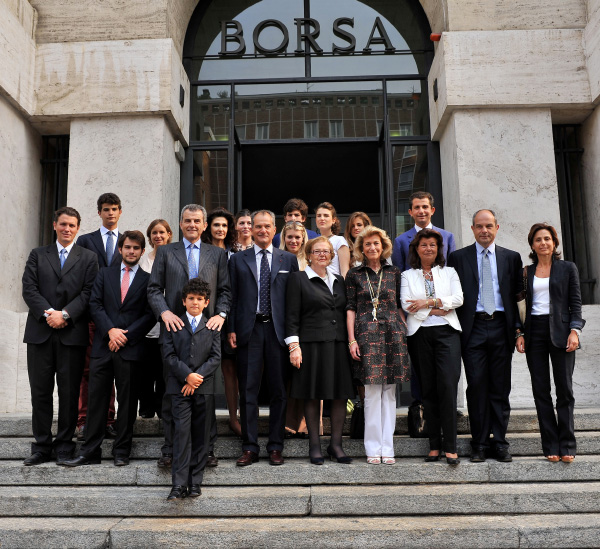 Members of the Ferragamo family gathered on the steps of the Milan stock exchange on the day the company went public in 2011.

Under his leadership, Ferragamo diversified and expanded the fashion business further, getting into eyewear, fragrance, watches and made-to-measure men’s shoes. And the fashion remained top-drawer, too, continuing its storied run in recent years under the leadership of Massimiliano Giornetti, a longtime Ferragamo designer who became creative director in 2010. “Ferragamo is a fine example of a successful fashion company emanating from Italy’s unique historical tradition of ‘keeping it in the family,’” says Clair Watson, 1stdibs’ director of fashion. “Originating as master craftsmen of quality leather goods with a progressive edge, the company has consistently evolved to stay relevant to the business of fashion.”

Maintaining such currency is not without its challenges, of course, especially for a brand with Ferragamo’s history. “Houses founded on leather goods cannot always find a place in the fashion world,” the International Herald Tribune’s Suzy Menkes noted in her September review of the Spring/Summer 2013 runway shows in Milan. “But with knee-high peep-toe crocodile boots and python used as a textural surface among beige and pale colors, Salvatore Ferragamo’s collection had a luxe style . . . the depth of luxury in the fabrics looked like an appeal to the private jet set.”

A willingness to diversify — on the part of the family in general and of Ferragamo in particular — is, in addition to its ability to evolve stylistically, what has kept the company relevant, not to mention highly profitable over its many years and many incarnations, and even as a third generation has come along. For while Salvatore and Wanda’s brood numbered only six, the subsequent tier of the family tree has 25 members, and this had the potential to pose something of a problem: a too-many-cooks-in-the-cucina kind of conundrum.

Ferragamo uses his Tuscan estate, Il Borro, as a private weekend retreat, but he also operates it as a working winery and a Relais & Chateaux boutique hotel.

To prevent such a situation, the family agreed that only three of Salvatore and Wanda’s grandchildren would join the fashion company in any official capacity. And the other 22? “We diversified, both as a group and individually,” says Ferragamo, explaining that other family members became involved in other businesses. “Someone invested in boats, someone in wine, as a group we have invested in hotels.”

Those hotels would be the Lungarno Collection, with pristine properties in Florence, Rome and Tuscany, as well as sailing yachts available for private charter, presided over by Ferragamo’s younger brother Leonardo, who also serves as CEO of Palazzo Feroni Finanziaria S.p.A., the family’s holding company. Ferragamo’s other younger brother, Massimo, meanwhile, opened his own Tuscan hotel, Castiglione del Bosco, a few years ago with his wife, Chiara. And Ferragamo himself, for his part, has turned his Tuscany property into a luxury vacation stay all its own. And it’s here, in the green fields and golden vineyards of the Arno River valley, that he is best able to get beyond his chairman’s seat at the boardroom table. 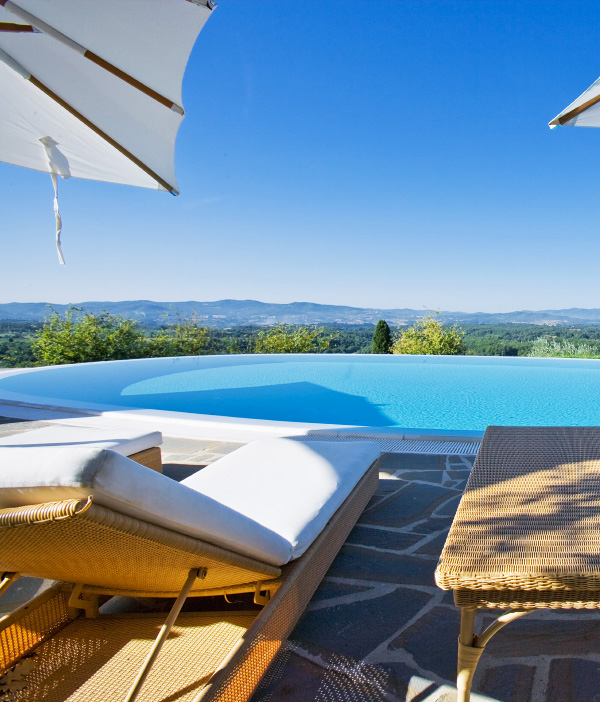 The pool and patio at Il Borro overlook the Tuscan hills and surrounding valley.

Called Il Borro, and now a member of the Relais & Chateaux portfolio of hotels and restaurants, the property comprises what was once a fully functional agricultural estate — including a large manor house and an entire medieval village (dating back to 1039) — spread across some 1,700 acres about an hour’s drive southeast of Florence. Ferragamo discovered it in the mid-’80s, on a hunting trip, and recalls, “I saw this beautiful place, where the previous owner didn’t care about it because he wasn’t interested in shooting, he wasn’t interested in agriculture. So I was really suffering. You see things sometimes that just need to be taken care of. I was desperate to do the immediate, obvious thing.”

And so he bought it, and then, together with a fleet of architects, designers and artisans, he set about restoring the house, the village and the infrastructure connecting it all together, while his lovely, mahogany-tressed wife, Ilaria, handled the country-chic interiors. He knew early on that it would be much more than a weekend house: “It was all part of that same diversification,” Ferragamo says now. “When I was about to buy it, I put my children together, and I said, ‘This is not just for going shooting, not just for myself to enjoy. It’s more than that. I think we can make a business here, and some of you can be involved and run it.’”

Sure enough, his son Salvatore — whose twin brother, James, looks after the company’s women’s leather division — stepped forward, rising to the challenge. And it was a challenge. “If you look at Il Borro now, it seems it would have been easy for him to say OK to the project,” says Ferragamo. “But in those days, we are talking fifteen years ago, it was really under construction.” (That construction continues even now, with the ever-evolving property about to debut accommodations in five newly restored buildings in the village, opening just in time for the summer season.) 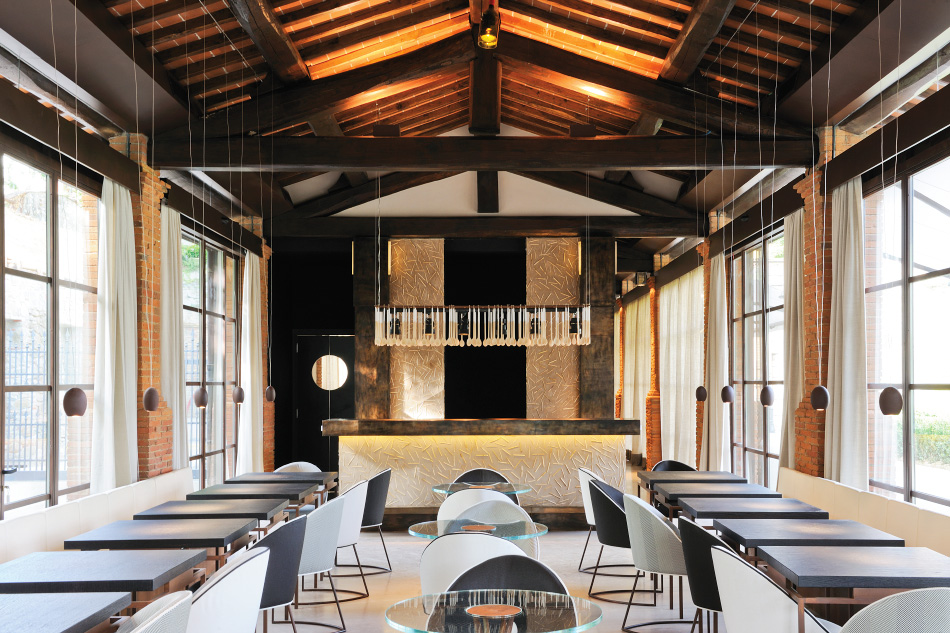 The estate also produces its own wine — ma certo, as the Italians say, meaning “but of course” — and although the fashion business clearly drives him, it’s when talking about his vineyards and vintages that Ferragamo is at his most animated, his blue eyes sparkling even more than usual. He freely admits, however, that in the beginning he thought the wine business far too competitive to get involved in. “But today, the one who’s most enthusiastic about wine is me,” he says now, going on to talk passionately about a pure Syrah he’s about to start producing in an oversized two-liter bottle, the label depicting a gentleman whose girth is so broad he can’t get his arms around his own stomach. “So the bottle itself is big, and he’s big,” concludes Ferragamo, who also collects wine-related prints from the 14th to 19th centuries, displaying them in Il Borro’s cellar and tasting room. “It’s going to be fun.” 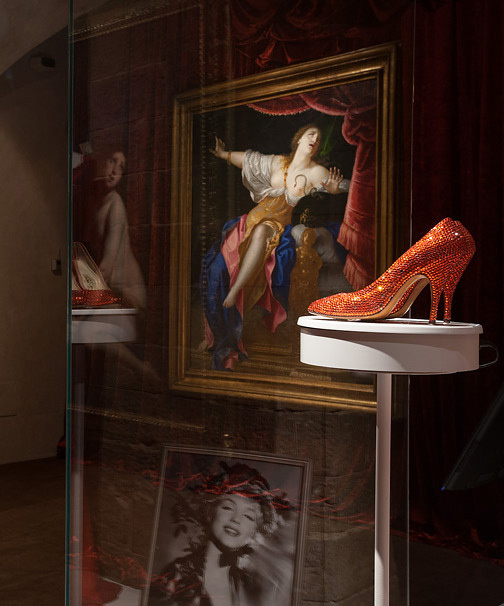 A recent Marilyn Monroe exhibition at the museum in Ferragamo’s Florence headquarters proved so successful its organizers extended its run by several months.

So it seems the man who oversees the very serious business of Ferragamo’s fashion empire does also know how to relax and have a good time, at least a little bit every now and then. But his duties still call. In addition to his role at the company and his work at Il Borro, he sits on the boards of a number of fashion, finance and educational organizations in Florence, not least of all the Polimoda Fashion School and Pitti Immagine, which mounts the important fashion presentations that happen every season at the city’s Palazzo Pitti and elsewhere around town.

But it’s the family business that most decidedly holds his attention. He has, after all, responsibilities to his loved ones. And not just his blood relations either, but the larger Ferragamo family, too, the one comprised of the 3,000 people who work for the fashion house today. “We are where we are because we have fantastic people at the company,” he says. “They really participate. Believe me, it is a great feeling to be in a company where you feel that people really care about how the company is performing. As we have grown and grown and grown, it’s gotten harder and harder to shake the hand of every person every day. But we try to be there, and I think it’s important that they feel that we’re there, that all the shareholders, family and me, that we’re all very close to the company.

And so protect it he has, not just for his own family but for that extended corporate one, too — and, now, for his stock-trading shareholders the world over. One can’t help but think that somewhere up in shoemaker heaven, his father is no doubt very proud. Very proud, indeed.