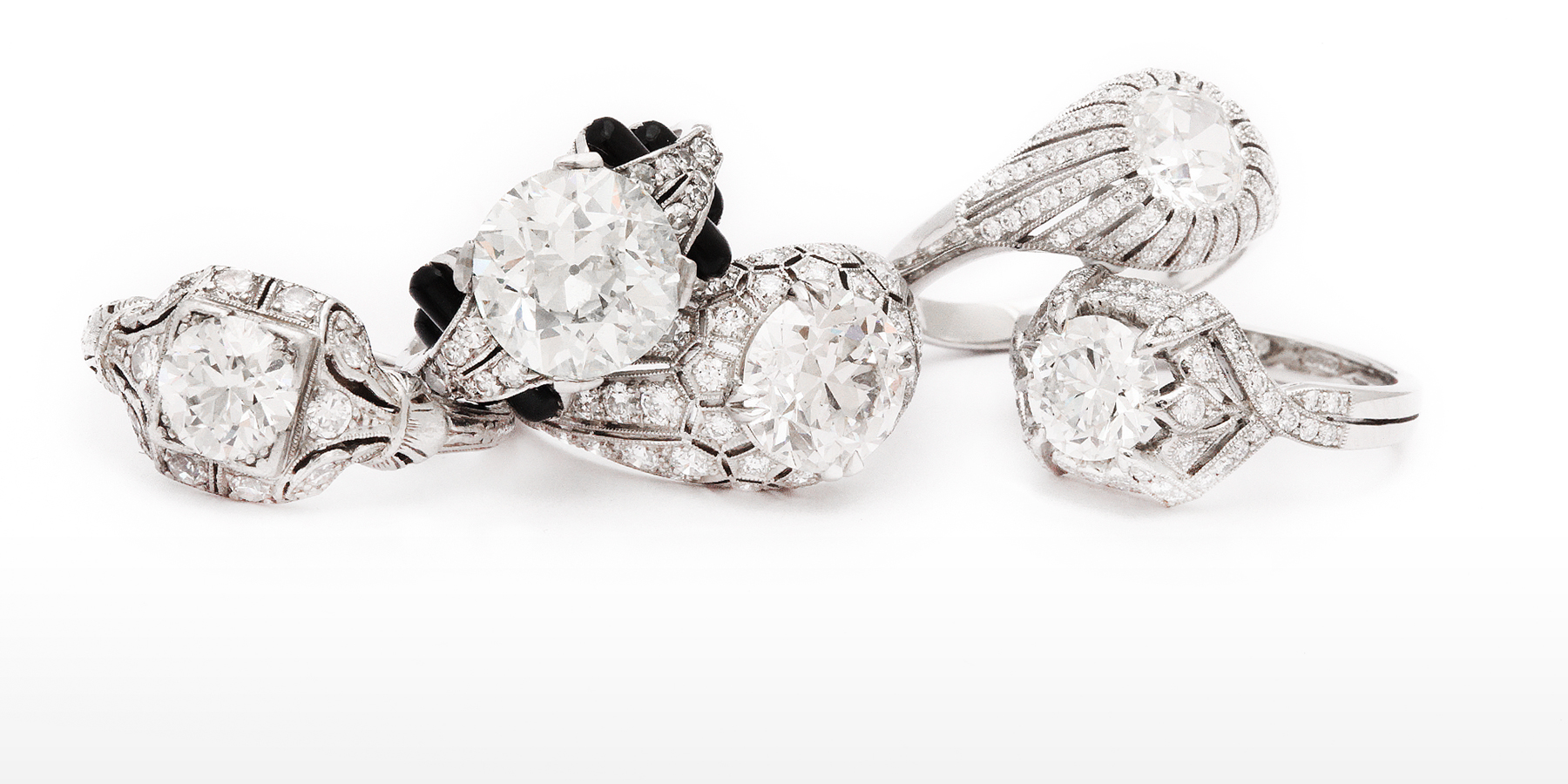 For years, countless style-setters around the world — Hollywood starlets among them — have turned to Madison Avenue mainstay Fred Leighton for its exceptional selection of antique and vintage baubles. Now, the jeweler is debuting its latest sparkling arrival: a brand-new 1stdibs storefront. 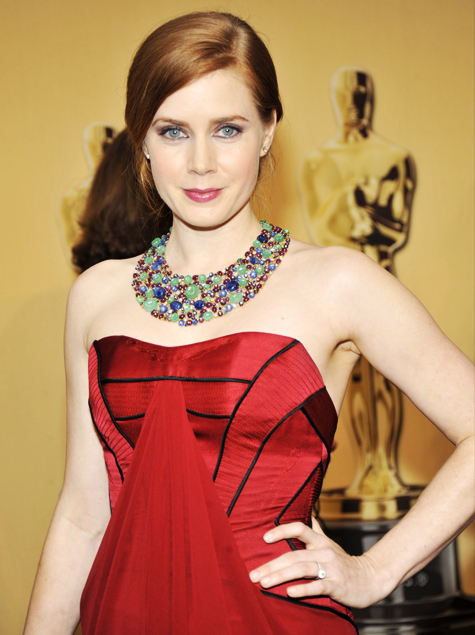 At the 2009 Oscars, Amy Adams, a Best Supporting Actress nominee for her role in Doubt, paired a 1950s Fred Leighton bib necklace made of emeralds, rubies and sapphires with a Carolina Herrera gown. Photo by Kevin Mazur/WireImage. Top: A selection of the store’s vintage and contemporary engagement rings.

Wrapped around its elegant corner of 66th and Madison Avenue in New York, Fred Leighton is a brilliantly glittering star in the jewelry firmament. Since the boutique — which recently joined 1stdibs — moved uptown in 1984, Fred Leighton has become known for bringing antique and 20th-century jewels to a discerning international clientele and, perhaps most famously, for contributing to the red carpet looks of countless starlets (including Meryl Streep, Natalie Portman, Amy Adams and Claire Danes, to name but a few). Simply put, over the past few decades, Fred Leighton has helped move antique jewelry out of its dusty, insular ivory tower and into the wider world of fast-moving modern style. It’s an achievement of which Greg Kwiat, the jeweler’s CEO, is hugely proud. As he recently noted, “Fred Leighton is, and always has been, about making antiques part of your life, about how to take a jewel that was beautiful in its day and make it fashionable now.”

The story of Fred Leighton as we know it began in the 1970s, when Murray Mondschein (now something of a legend in the jewelry industry) took over a Greenwich Village clothing shop called Fred Leighton (after its original owner) and started selling Mexican wedding dresses, hand-crafted accessories and ethnic jewelry. When someone gave him some antique jewelry to sell, he added that to the mix. Kwiat explains, “He understood fashion and knew what was exciting in design.” That jewelry proved to be a huge success for Mondschein, becoming his main focus as the business grew. A defining moment came in the mid-1990s: “It started with an unexpected call from Miuccia Prada,” relays Kwiat. “She had designed a dress for Nicole Kidman to wear to the Oscars, and she had something very specific in mind for the jewelry that should go with it.” Fred Leighton lent a vintage choker of Australian opals (a reference to Kidman’s nationality) that Prada, a client and collector, had seen in the shop. The timing was perfect, as “vintage” in general — clothes, accessories, jewelry, furniture — was being embraced for its charm, individuality and powers of personal expression. “Estate jewelry pushed against the sameness of modern branded culture,” explains Kwiat. Then, as today, for stars on the red carpet, such as Lupita Nyong’o at this year’s Oscars, wearing a Fred Leighton estate jewel — a jewel with soul, character and a certain cerebral authenticity —  signals that one has arrived at a certain (accomplished) place in life. 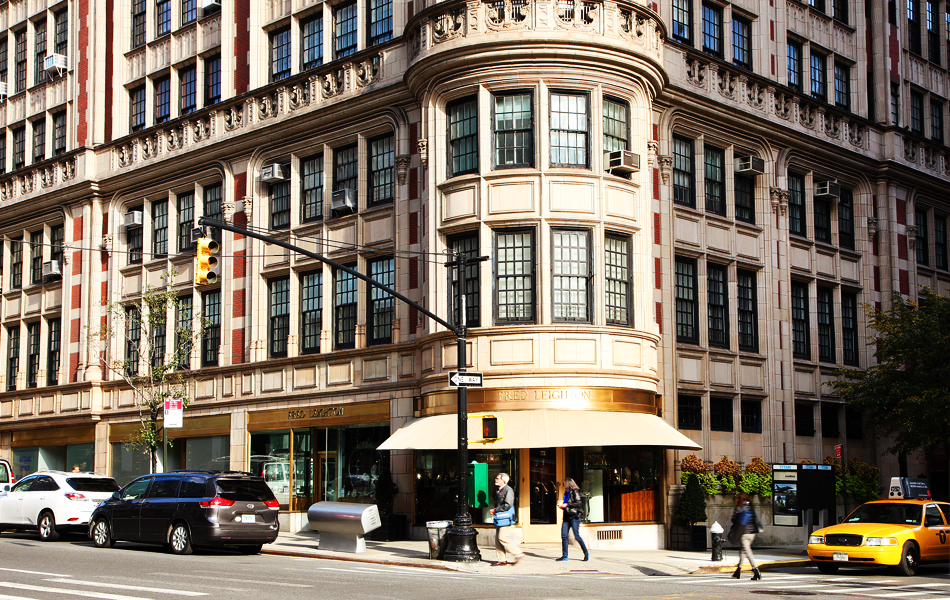 Fred Leighton has occupied a prime spot on the corner of 66th Street and Madison Avenue in New York since 1984. A second location opened at the Bellagio, in Las Vegas, in 1998.

“Fred Leighton is, and always has been, about making antiques part of your life, about how to take a jewel that was beautiful in its day and make it fashionable now.” 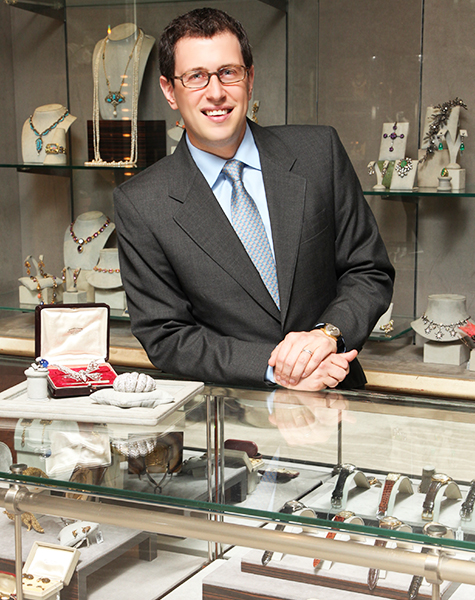 Greg Kwiat, a fourth-generation jeweler and Goldman Sachs alum, took over as CEO of Fred Leighton in 2009.

By the mid-2000s Mondschein (who by then had legally changed his name to Fred Leighton) had retired and an unsettled period of interim ownership followed. In 2009, the Kwiats, world-leading diamond traders and jewelers, bought the business, and Greg Kwiat became CEO. He had grown up immersed in the family’s 100-year-old company, following his grandfather and his father into the business in 2004, after spending five years at Goldman Sachs, where he acquired financial acumen and the desire to buy a business. The chance to purchase Fred Leighton presented a unique intersection of his experiences. “Fred Leighton is one of the great names in jewelry history,” he says. “It was a unique opportunity.”

Today, the Madison Avenue boutique presents an air of streamlined serenity: taupe carpet warmed by original Art Deco showcases; furniture in rich, glossy Macassar wood; wrought-iron balustrades that recall a luxurious 1930s ocean liner. The jewelry, set out simply but impeccably, covers a 200-year span of styles and eras, from the candlelit romance of Georgian diamond chandelier earrings, through the pomp and grandeur of Victorian jewels, to the modernism of Art Deco masterpieces and seminal 1960s designs by the likes of Van Cleef & Arpels and David Webb. Rebecca Selva, chief creative and PR director, has been with Fred Leighton for some 25 years. A jewelry expert and knowledgeable historian with a sure sense of style, she both masterminds the buying process and works closely with clients, including Jennifer Aniston and Sarah Jessica Parker. Along with Dana Kiyomura, director of acquisitions, and Kwiat, they scour the world for the powerful, characterful, often quirky jewels that have become the company’s trademark. “You have to buy wonderful things when you see them,” says Kwiat. “They come around only once.”

Selva explains that Fred Leighton’s particular strengths lie in Victorian pieces from the 1800s and Art Deco pieces. She likes the eclecticism and eccentricity of 19th-century jewelry, embodied, for example, by an enameled serpent bangle, with its gem-encrusted head, a favorite motif of Queen Victoria, or a pair of dramatic gold Egyptian-inspired earrings with scarab motifs that tell of the vogue for archaeological revival jewels during the period. When it comes to Art Deco, she looks for classics that capture the 1920s’ blend of geometric stylization and luscious exoticism, as seen in, say, a jabot pin by Cartier, with carved-turquoise leaves; coral-and-onyx drop earrings; or a pair of platinum-and-diamond tulip pins by Boivin. A major feature of Fred Leighton’s expansive inventory are spectacular jewels signed by the legends of 20th-century design — including Boivin and that other currently sizzling-hot icon of the era, Suzanne Belperron. These are the names, says Kwiat, that stand out from the crowd and appeal to an ever-more-discerning clientele.

Fred Leighton’s overall selection is geared toward showing clients how to mix styles and periods — a Victorian bangle with a 1960s sautoir for example. And, explains Kwiat, in each jewel at Fred Leighton there is a special something: unexpected, perhaps extraordinary, an indefinable element that Kwiat describes as “wonderfully strange.” He adds, “When our Hollywood friends come to Fred Leighton, they look for a unique jewel, very personal, very real.”

Today, the antique and 20th-century offerings are joined by a contemporary Fred Leighton-branded collection, whose pieces are either inspired by historical precedents or actually incorporate antique elements, such as a pair of earrings composed of vintage diamond wings with appended enamels and fringes that provide an of-the-moment edge. Most recently, Kwiat and his team have added a selection of men’s jewelry and watches, both vintage timepieces by such makers as Rolex, Patek Philippe and Audemars Piguet, and, unusually, pocket watches converted to wristwatches — a classic example of how the company brings history to life. Summing up the philosophy of this living jewelry museum in the heart of the Upper East Side, Kwiat says, “Good design never gets old.”