The Duke of Dazzle 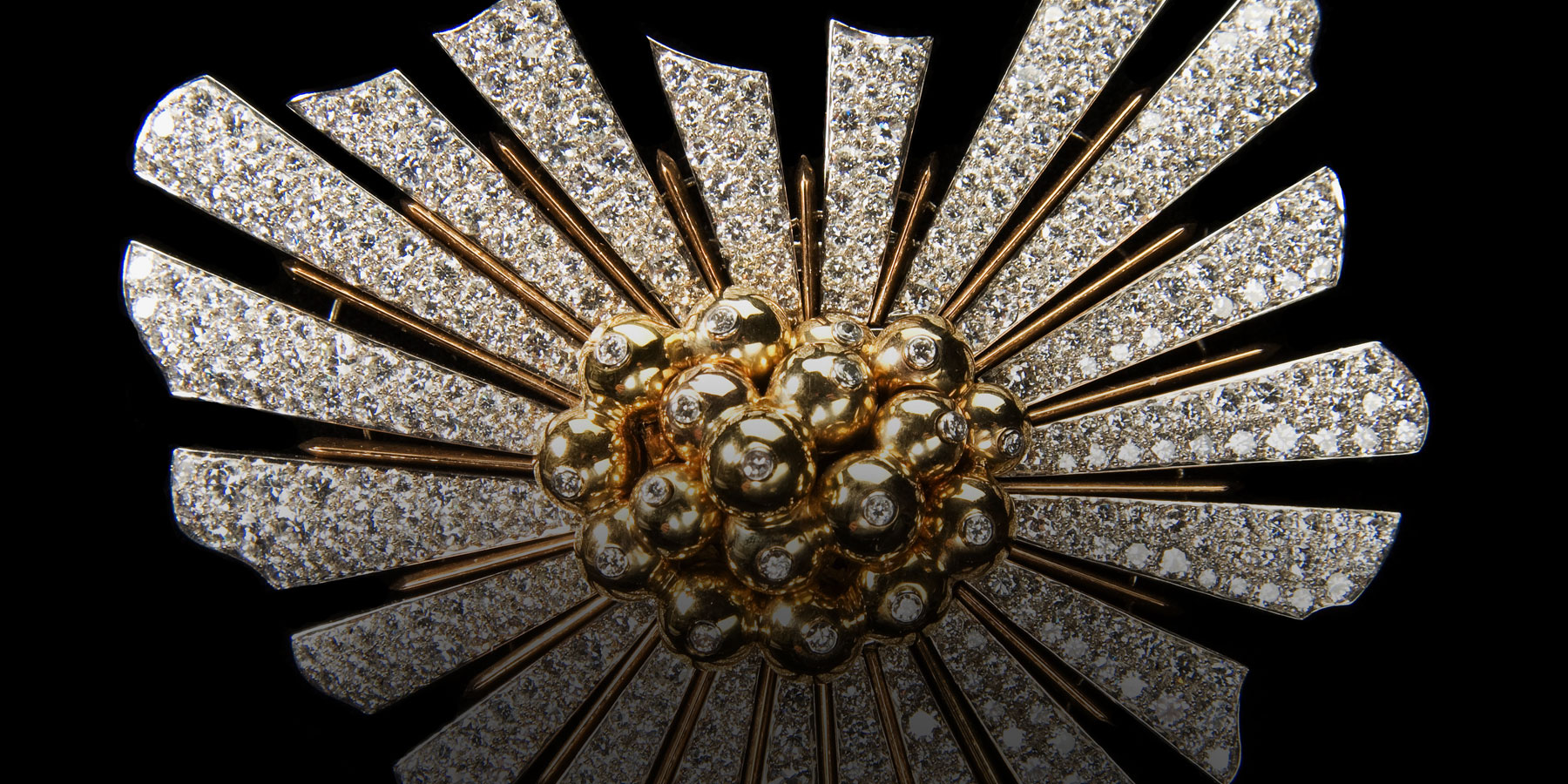 An exquisite New York exhibition demonstrates why the jewels of Fulco di Verdura remain the ne plus ultra for the world’s most discriminating women.

Fulco di Verdura is not exactly a household name, except for those who know a thing or two about highly original, often eccentric handcrafted jewelry and, even more so, for those fortunate enough to own some. In that exclusive group, Verdura is regarded as the most gifted and coveted designer of his time. Now, even those of us who don’t possess a piece of this history can catch a glimpse of it: For the first time ever, the glittering objects are on display, in a space on the 12th floor of 745 Fifth Avenue, formerly the offices of philanthropist Jayne Wrightsman (a longtime Verdura client) and next door to the Verdura Salon.

A bona fide duke with no clear ambitions but creative leanings aplenty (he could draw and paint), the young Verdura was part of the wandering social circuit — the so-called beau monde — that went from capital to capital, resort to resort. Being in the right places at the right times was what propelled them. It was a heady life of extravagance and round-the-clock merrymaking, including elaborate costume balls.

Verdura, though small in stature, had that indefinable quality called charm. As a result, he was the life of every party he attended. His inner circle comprised the chosen few — chosen by him, that is — of Europe and America. When he finally started designing jewelry under Coco Chanel in the late 1920s, many of his friends became his clients (or received the pieces as gifts). He palled around with Linda and Cole Porter, Cecil Beaton, various Rothschilds and other titled families. Elsa Maxwell took him under her ample wing when she was hired to do public relations for the Lido in Venice and introduced him to the local and visiting cognoscenti. Chanel, whom he met in Venice, hired him to work in the textiles division of her fashion house. But it was his flair for jewelry that soon caught Coco’s eye. Eventually, he rose to become her personal designer of fine jewelry. 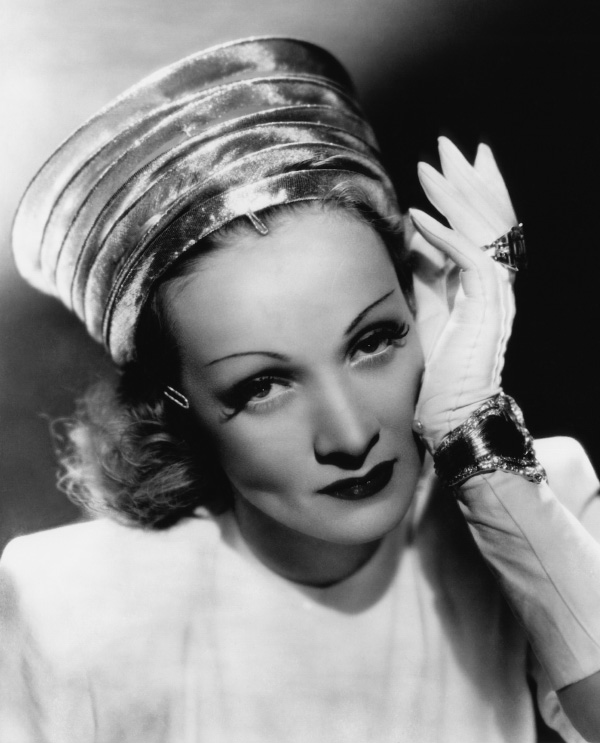 Inevitably, L.A. proved too provincial for Verdura, who was chronically peripatetic. Trips to New York, London, Venice and Paris were necessities, not whims. So was visiting and often staying with his chic and worldly friends — aristocrats and artists — in their villas, palazzos, estates, townhouses and on their yachts.

He left L.A. for New York and opened his own salon, first on Fifth Avenue in 1939, just as World War II was beginning in Europe. His backers were Vincent Astor and Cole Porter, for whom he made bejeweled boxes and cigarette cases — gifts from Porter’s wife, Linda — to commemorate the opening nights of several musicals. Verdura began to expand both his repertoire — he became much more daring and flamboyant — and his clientele. The Duchess of Windsor, Daisy Fellowes, Millicent Rogers, Katharine Hepburn, Greta Garbo, Clare Booth Luce, Marlene Dietrich, Brooke Astor, Babe Cushing Paley and her sisters, Betsey Cushing Roosevelt Whitney and Minnie Cushing Astor Fosburgh, routinely gave him commissions. In 1941, he collaborated on a collection of six pieces with Salvador Dalí to accompany a Dalí exhibition at the Museum of Modern Art.

Verdura retired in 1972 and left the care of the company to his partner, Joseph Alfano. He later moved to London, where he died in 1978 at the age of 79. His ashes remain in the family chapel, the Chiesa del Santo Spirito, in Palermo. This is the abbreviated version. A much more thorough one can be found in the excellent 2002 book Verdura: The Life and Work of a Master Jeweler by Patricia Corbett (Thames & Hudson). 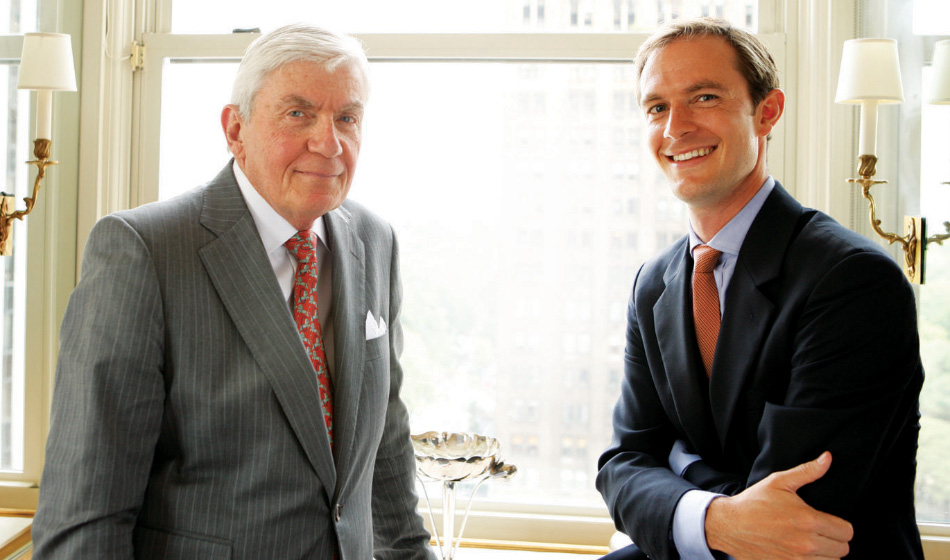 In 1985, Ward Landrigan (left) bought Verdura and is now its CEO; his son, Nico, joined the company 10 years ago and is its president.

In that book’s introduction, Vanity Fair’s Amy Fine Collins describes the sensation of wearing pieces by Verdura: “They were ingeniously calculated to flatter the wearer. Earrings undulated to complement the convolutions of an earlobe, rings seductively followed the phalanges of a finger, and necklaces gracefully traced the anatomy of the throat.”

The duke’s legacy might have been a vague memory, limited to auctions and safe boxes, were it not for Ward Landrigan who bought the firm in 1985. Landrigan became familiar with the designer’s work when he was in the jewelry department at Sotheby’s. The name Verdura kept popping up, usually when uttered by Landrigan’s swank clientele. Casual curiosity blossomed into a full-blown passion. One day, Landrigan averred, he would be Verdura’s gatekeeper. 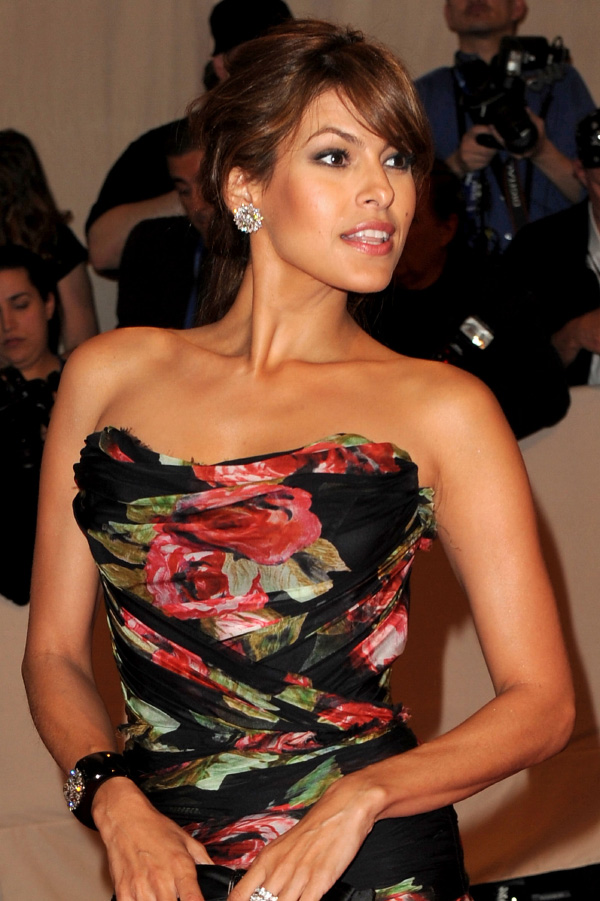 A soft-spoken man with patrician bearing, Landrigan was born in Springfield, New Jersey. When he was in high school, he was an intern at a local jewelry store, and it was there that he learned about the business that was to one day become his career. After college he studied for a year at the Courtauld Institute of Fine Arts, in London, and then at the Gemological Institute of America. By the time he was all of 24, he was head of the jewelry department at Sotheby’s in New York.

The story, as he tells it, is that his first brush with Verdura came about in 1965, when he did an appraisal for the opera diva Lily Pons in Texas. The piece that captivated him was a shooting star set with pavé diamonds. Thus began a fascination that would become a fetish, and from that point on, he always tried — often without success — to persuade his clients to part with the Verdura they owned.

In 1973, Landrigan left Sotheby’s to start his own estate jewelry firm, buying and selling important vintage pieces. But Verdura was still at the top of his mind. It wasn’t until 1984, however, that Joseph Alfano agreed to sell the company, enabling Landrigan to fulfill his fantasy.

Over time, Landrigan was able to accumulate much of the duke’s inventory, thousands of pieces including boxes of his sketches. Now, in the salon on Fifth Avenue, faithful clients and potential customers can wander through three rooms of Verdura originals and newly made jewelry based on the sketches, as well as pieces by Landrigan himself and a few by Suzanne Belperron, the early-20th-century French jeweler who worked for Boivin and Herz and whose full collection Landrigan would love to also land one day. 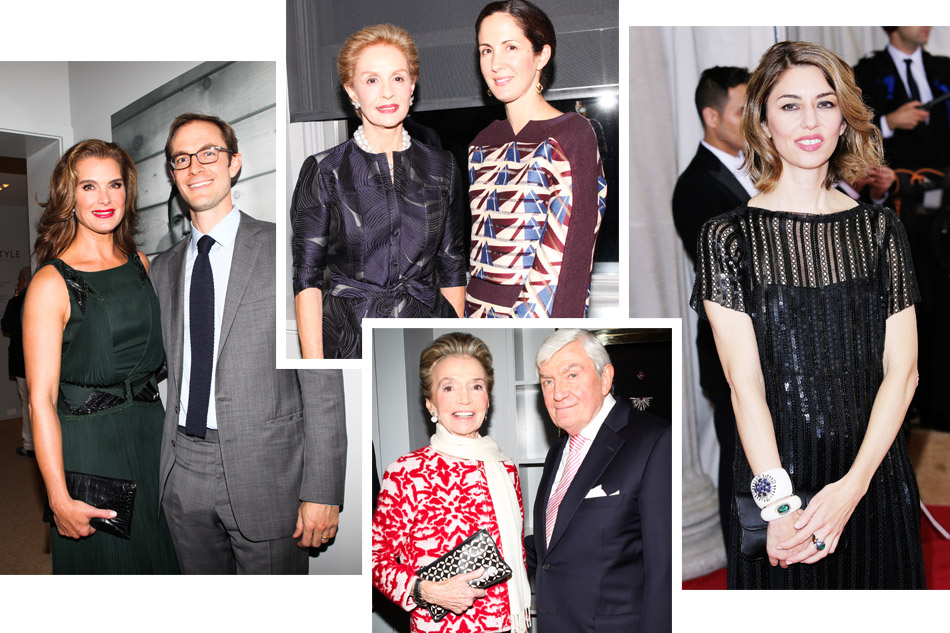 Left: Longtime Verdura friends and clients who attended October’s “Power of Style” launch party include, clockwise from above: Brooke Shields with Nico Landrigan; Carolina Herrera and her daughter Patricia Lansing (the exhibition’s co-curators); and Lee Radziwill with Ward Landrigan (photos by Sam Deitch/BFAnyc.com). Right: Verdura still enjoys a loyal following among stylish celebrities, among them Sofia Coppola, who was photographed last May wearing two of the jeweler’s cuffs (photo by Randy Brooke/WireImage). 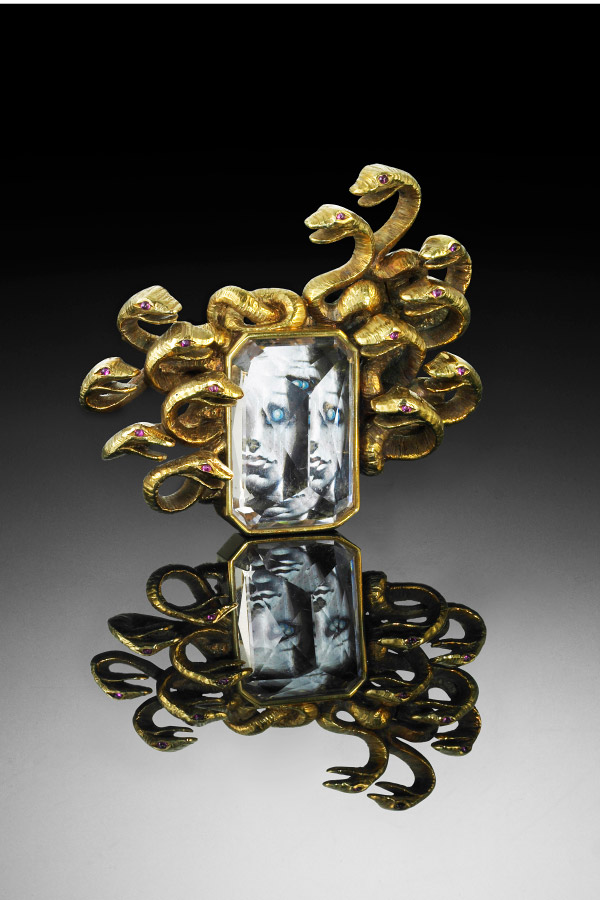 The designer collaborated with Salvador Dalí on this Medusa brooch, 1941.

Today, with his son Nico, who joined the company 10 years ago, Landrigan is celebrating 75 years of Verdura with the first-ever exhibition of the designer’s work and life. Called “The Power of Style” (the title is borrowed, with permission, from a book by Annette Tapert and Diana Edkins about a handful of glamorous and self-possessed women, many of them — coincidentally — Verdura’s clients), the show is co-curated by fashion designer Carolina Herrera, her husband Reinaldo Herrera (who was friends with Verdura) and their daughter Patricia Lansing. Even those with only a marginal interest in jewelry will be fascinated not just by the jewels themselves, but also by Verdura’s sketches, as well as the wall of beautiful miniature gouache-on-vellum paintings that Verdura made as gifts for friends. Not all of the jewelry on display belongs to the firm — many of the 216 pieces are on loan from such style-setting women as Mercedes Bass, Sofia Coppola, Brooke Shields and several others who prefer to remain anonymous.

Fiona Druckenmiller, a dealer in estate jewelry, carries Verdura at FD, her New York shop (and on her 1stdibs storefront), and she loaned three pieces to the show. “Verdura’s use of color was masterful and original in his time and to this day,” she says. “He drew inspiration from nature: from animals, shells, birds, dolphins, fruit and flowers, expressing endless wonderment with the beauty that surrounds us. He created pomegranate, kangaroo and pinecone brooches, for example, finding beauty in places and things that others had ignored. His pieces almost sing to us.”

Among the most prized pieces included in the show are Greta Garbo’s curb-link bracelet watch, which Verdura designed for her in 1939; Coco Chanel’s pair of Maltese Cross cuffs (she wore one on each wrist); and Diana Vreeland’s duo of Byzantine brooches. Each of the galleries, and the vitrines within them, are reminders not only of the jewels themselves, but of an era long gone but glorious in every significant and memorable way. As for the women who wore Verdura, Landrigan dubs them “the best of the best of the best.”

The last gallery in the exhibition, which closes on December 23, leads to the Verdura showrooms, where a purchase or two or more can be made — and just in time for Christmas, too. How blissfully convenient.