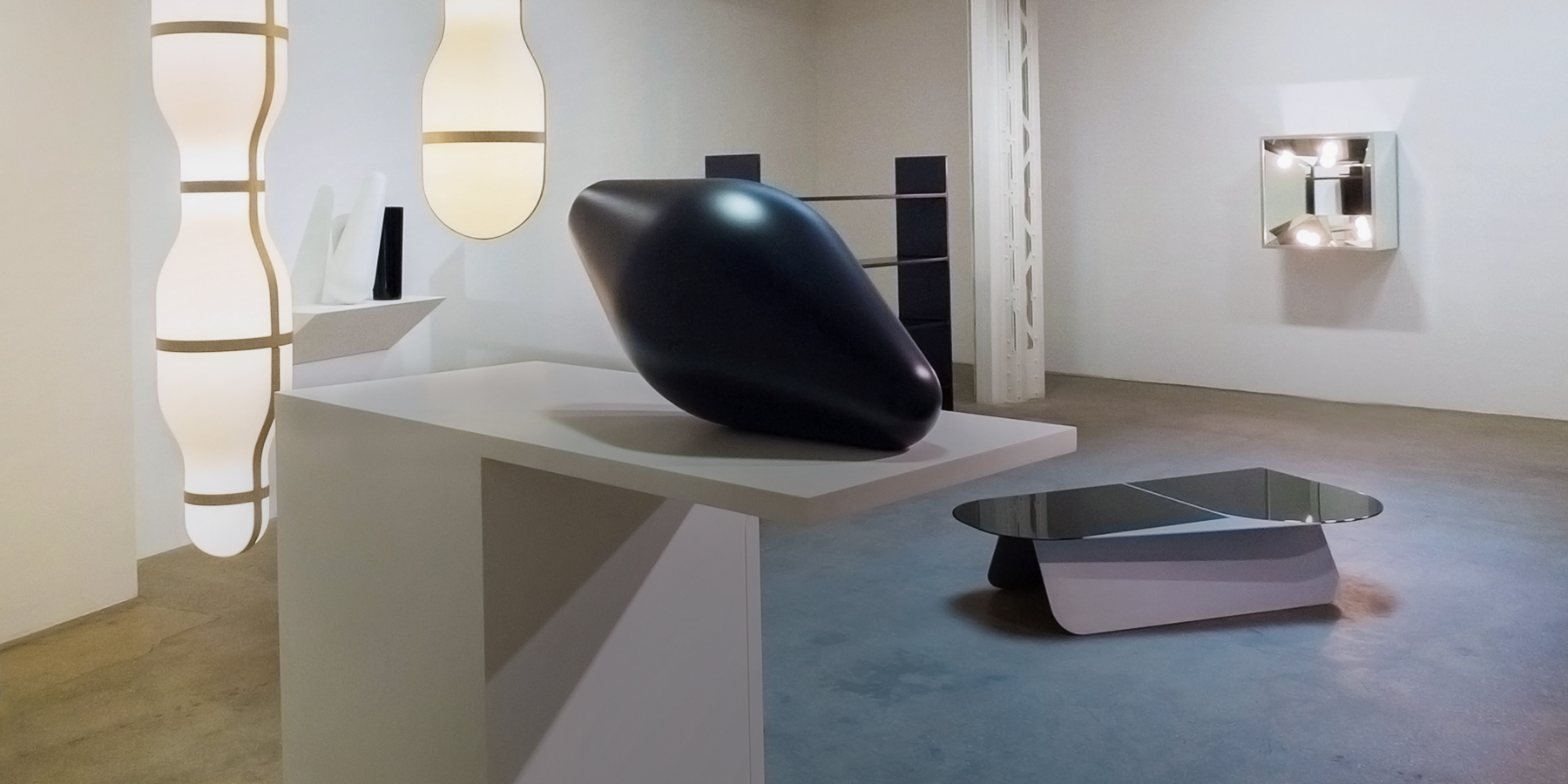 Though known for its contemporary limited-edition designs, this Paris–based gallery is now selling the most innovative French and Italian lighting from the late 20th century, works sourced from the personal collection of its founders, Didier and Clémence Krzentowski. 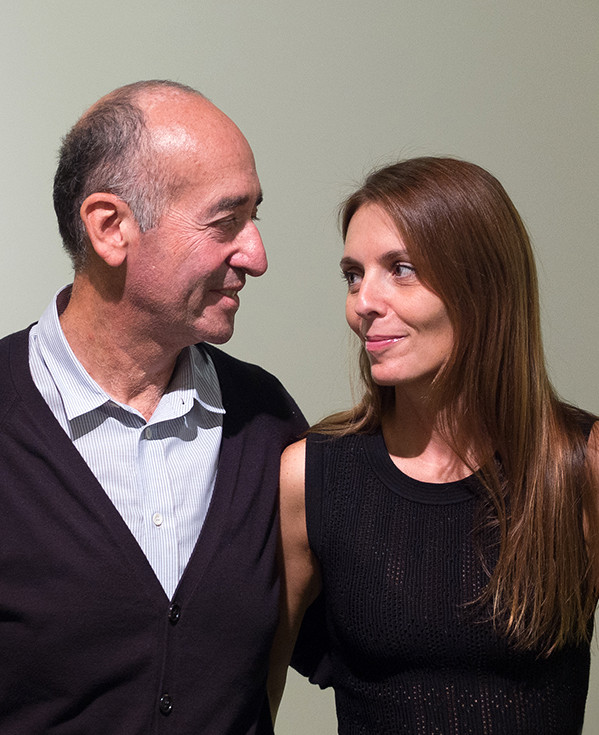 January 16, 2013Didier and Clémence Krzentowski originally founded Kreo as an agency connecting contemporary designers with industrial clients, and eventually opened the gallery as a laboratory where designers could experiment. Top: The exhibition space features light fixtures by the Bouroullec brothers. Both photos by Barry Sutton

Since its founding in 1999, the Parisian contemporary design mecca Galerie Kreo has built a formidable reputation for its innovative, limited-edition works by today’s top designers. Such talents as Marc Newson, Martin Szekely, Jasper Morrison, Hella Jongerius and the Bouroullec Brothers have been granted carte blanche by the gallery’s husband-and-wife cofounders, Didier and Clémence Krzentowski, to create cutting-edge pieces that blur the border between design and art and are regularly snapped up the likes of Gucci-YSL magnate François Pinault, hotelier Ian Schrager and fashion superstar Karl Lagerfeld.

This past year, however, the Krzentowskis garnered attention for a decidedly different sort of project: their eye-popping personal collection of Italian and French lighting from the 1950s through the ’80s, which they debuted at Design Miami/Basel last June. Representing the best of three decades’ worth of collecting — some 800 prime examples from the likes of Frenchmen Pierre Paulin, Serge Mouille and Pierre Guariche; and Italians Joe Colombo, the Castiglioni brothers and especially Gino Sarfatti, who founded the lighting company Arteluce in 1938 — their Basel booth dazzled with 150 vintage lamps augmented by about 50 of Kreo’s contemporary limited-edition lights.

The sensational selection received an equally sensational response: Nearly every piece sold. “There was a lot of interest from Americans,” Didier confirms, not least of all from Dominique Levy of L&M Arts, who, Didier says, has a beautiful Sarfatti collection. 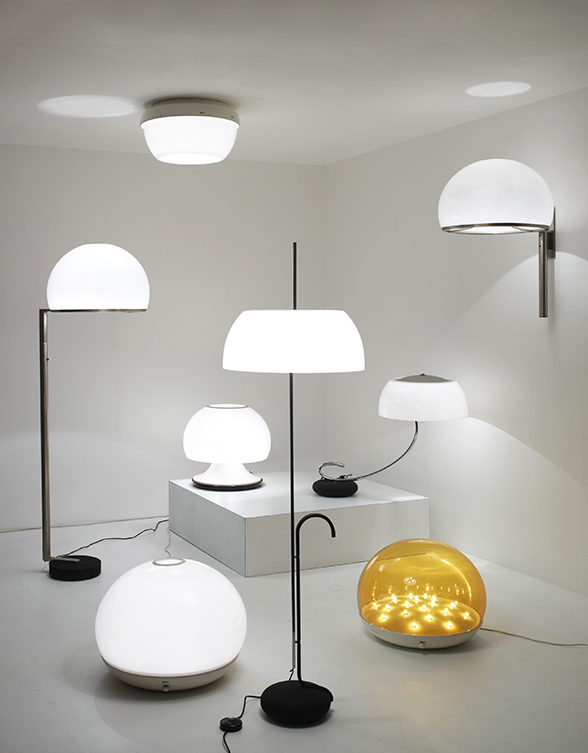 As part of the larger coming-out party the Krzentowskis are throwing for their lighting, the couple’s definitive new book, The Complete Designers’ Lights (1950-1990), 30 Years of Collecting (from Zurich art-book publisher JRP-Ringier), was also unveiled in Basel. A chronological catalog of their acquisitions, the tome also includes a selection of Kreo’s 21st-century lighting. Collectors have greeted it as the new go-to bible on the subject. “It is already quoted as a reference by the experts at Christie’s and Phillips,” Didier notes with pride. “I wanted to show the history of design through these lamps.”

The Krzentowskis turned to 1stdibs to shine a third spotlight on the collection. The recent launch of Kreo Light on this site presents an online offering of many of the collection’s outstanding pieces. “Kreo Light is a play on words — the lighting is old and rare, but it’s a different selection from our gallery limited-editions,” Clémence says.

What interests me is the designer who makes a lamp that is not the most beautiful but that gives the best light,” Didier confesses when I meet with him and Clémence to discuss the collection at their offices above the Saint-Germain-des-Prés gallery. Didier and I are sitting in Paulin armchairs (CM 190s designed in 1954) arranged around a Szekely liquid metal-on-metal Solaris side table. The chic and svelte Clémence, clad in a little black Alaïa dress with a pair of high-heeled strappy YSL sandals, is multitasking nearby behind Szekely’s carbon-fiber desk. Above hangs the Bouroullecs’ three-armed Black Light. On the walls, Achille Castiglioni’s spotlight, the Bouroullecs’ Rocks shelving and Andrée Putman’s checkerboard mirror share space with a Nan Goldin photo and a painting by Tatiana Trouvé. The artful industrial designs carry on a smooth dialogue with the fine art.

Pierre Paulin’s Elysées floor lights, which the designer created in 1970 for the French presidential palace, were commissioned by the then-President Georges Pompidou. Photo courtesy of Galerie Kreo

When the couple met, they were both involved in sports: Didier owned a skiwear company; Clémence, then in her early 20s, was in charge of organizing the 1988-92 pre-Games tour of the Olympic flame — and its design-forward torch by Philippe Starck — for the French Winter Olympics. (In Kreo’s collection, Starck’s 1988 Flos “Ara” table light echoes the torch’s horn shape.) When Didier sold the company in 1992, they established the Kreo agency — the word for “creation” in the universal language Esperanto — to link designers up with industrial clients. Notable successes included Martin Szekely’s Perrier glass, of which Perrier has sold more than 2 million.

A few years later, they opened the gallery to “give those designers greater freedom and the possibility to experiment, something they couldn’t find in industry,” Clémence explains. “The gallery became a design-research laboratory, and because that resulted in entirely new pieces, we decided to produce limited-editions.”

A dedicated collector from childhood — first of key rings, then watches and later photography and contemporary art — Didier has never wavered on his stringent criteria. “I am extremely rigid,” he confides. “I need something that I’ve never seen before and something I don’t understand immediately but have to ask questions about.”

For him, the move between collecting and selling has been seamless: “I opened the gallery almost by accident to sell the duplicates in my lighting collection by such designers as Joe Colombo,” he says. What is on 1stdibs now comes from this same cache — what he describes as “the most important lamps from the collection.” 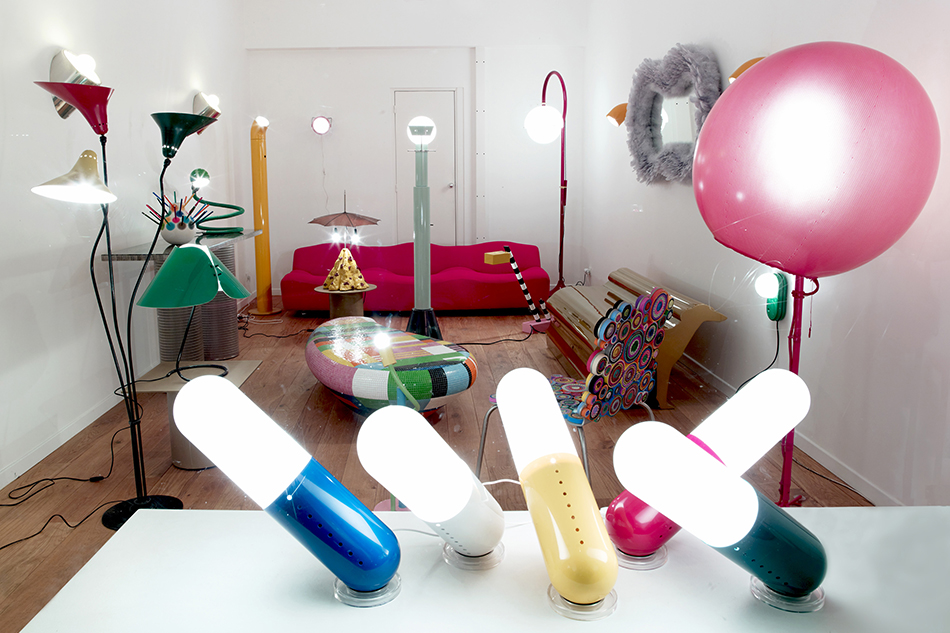 The playful palette of Cesare Casati and Emanuele Ponzio’s Pillola lights, from 1968, set the tone for a display with a colorful pop sensibility. Photo courtesy of Gallerie Kreo 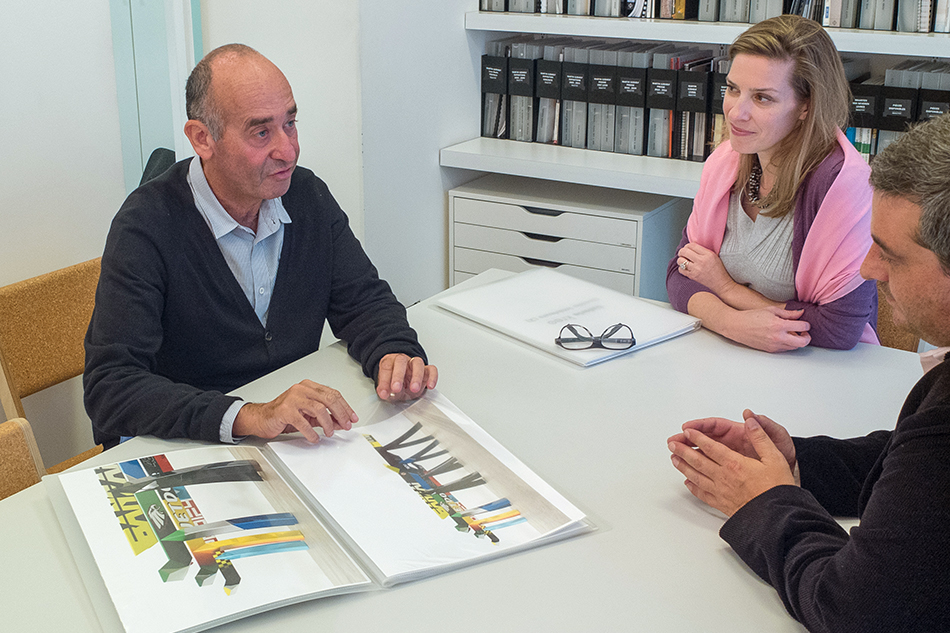 Didier looks over drawings for Konstantin Grcic’s Champions collection, on view at the gallery last summer, with some visitors. Photo by Barry Sutton 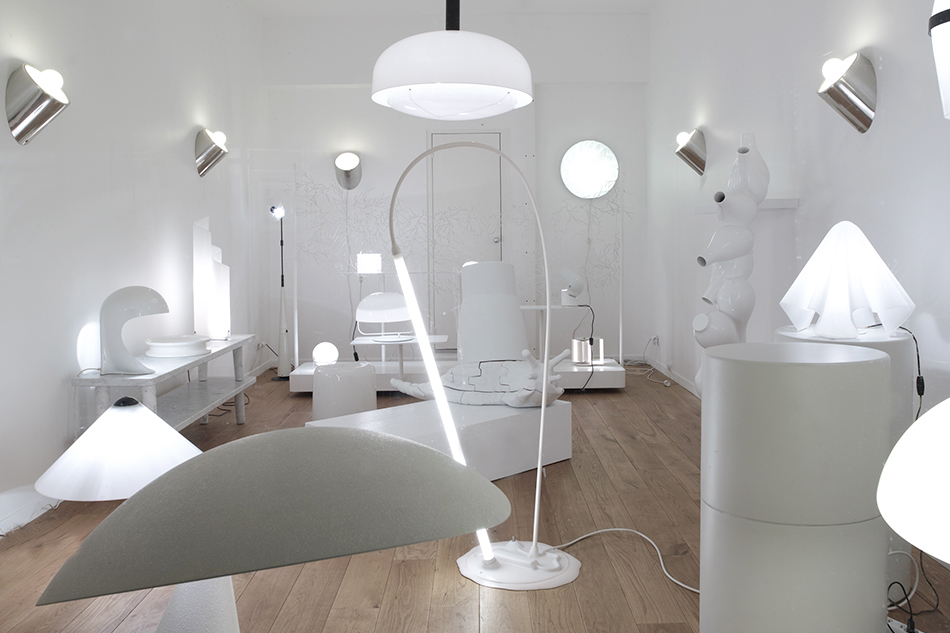 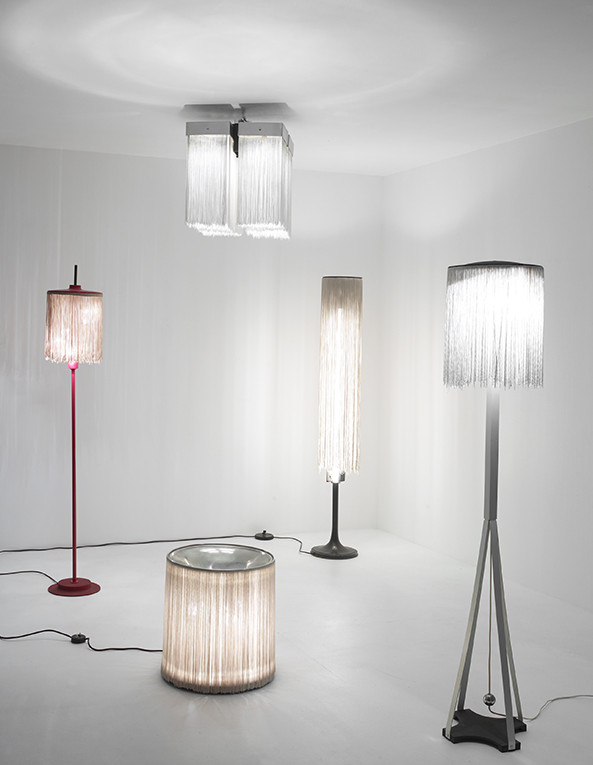 An image from the Krzentowski’s book, The Complete Designers’ Lights (1950- ­1990). features fringe-shaded lamps by Gino Sarfatti, Gianfranco Frattini and Massimo Vignelli, all for Arteluce. Photo courtesy of Galerie Kreo and JRP|Ringier

Landmark lights rarely had commercial success, Didier explains, so nearly all of these pieces were produced in small series. “When you are dealing with invention you are dealing with rarity,” he writes in the book’s preface. “There’s always a gap between innovation and contemporary taste — the eye has to get used to things.”

As we leaf through the book, Didier points out milestone pieces, some of which are available through Kreo Light. “Look at these images,” he instructs, as we turn to a page of Pierre Paulin’s Elysées floor lights, lacquered columns that he designed in 1970 for French President Georges Pompidou. “Paulin was enormously inventive,” Didier asserts. “He was the first to imagine a shade that was not above the light bulb.”

Paying attention to the dates of creativity is important, Didier says. They illustrate design connections — and ingenuity. Gesturing to a page with a bouquet of bulbs hanging from black electric cables, he says, “Look at Rudy Grauman’s 1993 ‘85 Lights’ ceiling light for Droog Design. Now, see where it comes from: Sarfatti’s ‘2109/24’ ceiling light from 1962.” Sure enough, suspended from a black lacquered metal mount is the original “bouquet” of twelve frosted globes, which the Italian wizard designed for Arteluce. “There is no better way to learn than through collecting,” he emphasizes. 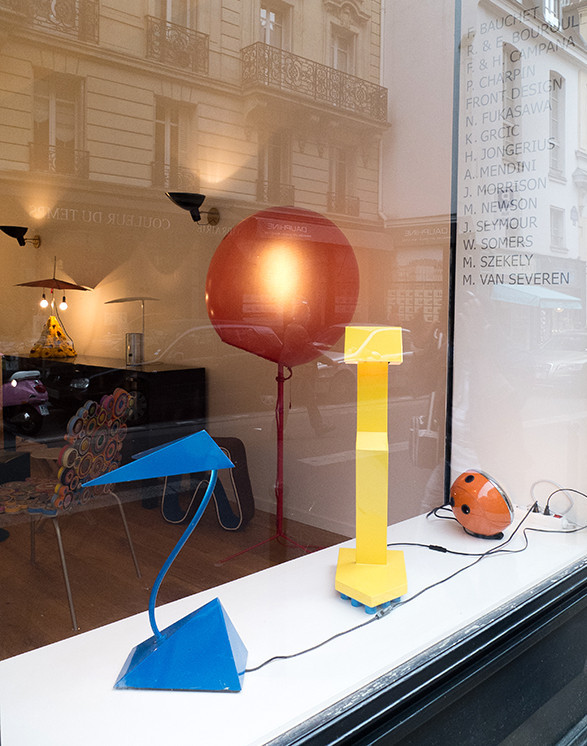 Two of the collection’s later pieces, shown in the gallery’s window, are Vincent Lemarchands’s 1984 blue-lacquered table lamp and a 1982 yellow-lacquered metal fixture with a yellow-and-blue structure. Photo by Barry Sutton

Didier began assembling these luminous pieces in the 1980s. His first lamp purchase was Danish designer Verner Panton’s 1972 Wire floor light, an arresting cage-like columned base topped by a red acrylic dome. He decided to focus on Italian and French designs although exceptions were always made for a coup de coeur (irresistible love at first sight). One such “coup” was the later acquisition of Panton’s “Fun 1 STM,” a 1964 floor lamp with a three-tiered cloud of hand-cut mother-of-pearl disks on a metal stand.

His lighting Holy Grail, however, was the geometric, multicolored “191” wall light by Sarfatti, whom Didier considers to be the most innovative of all designers. “It was on the cover of Domus in 1951, and then it disappeared,” Didier recounts. “Four years ago, I got a call from someone in Italy who knew about my collection, and he sent an image. I said, ‘Buy it tout suite!’ Someone else had already bought the piece but Didier persisted and eventually got it, for what he calls “a folly price.” (It’s quoted as about $69,000 in the International Herald Tribune.) “When you find the piece that you don’t have, it’s extraordinary,” he says.

He continues, “There are still things I’m looking for, of course. I look all the time. I am a Chasseniaque.” At first, I confuse the word with insomniaque — and he’s that, too — but he means he’s a hunter addicted to the thrill of the chase. “I hunt really all the time, sometimes even at night,” he admits. “That’s my life.”

Didier Krzentowski shares his thoughts on a few choice pieces. 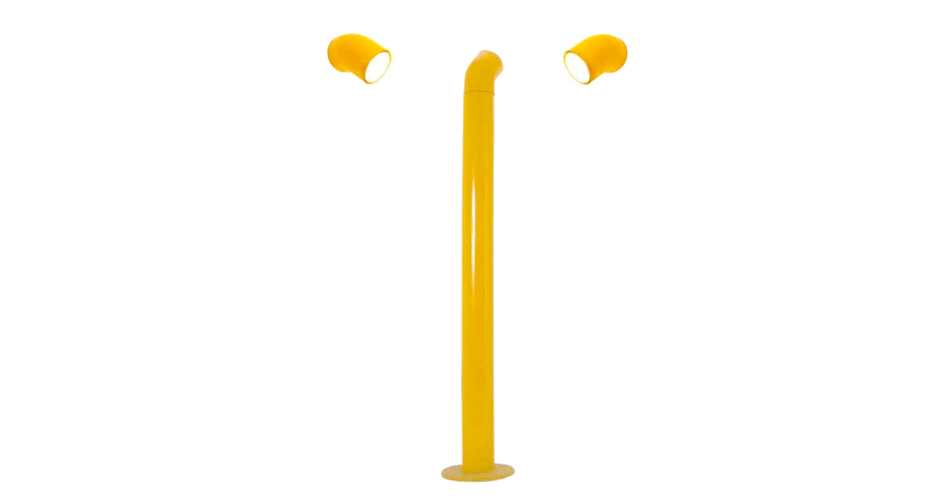 Richards, who studied at l’Ecole Nationale Supérieur des Arts Décoratifs and worked significantly with lighting during his career, is considered one of the best industrial designers of the 1960s. This very rare set uses an epoxy yellow lacquer and tubular forms. 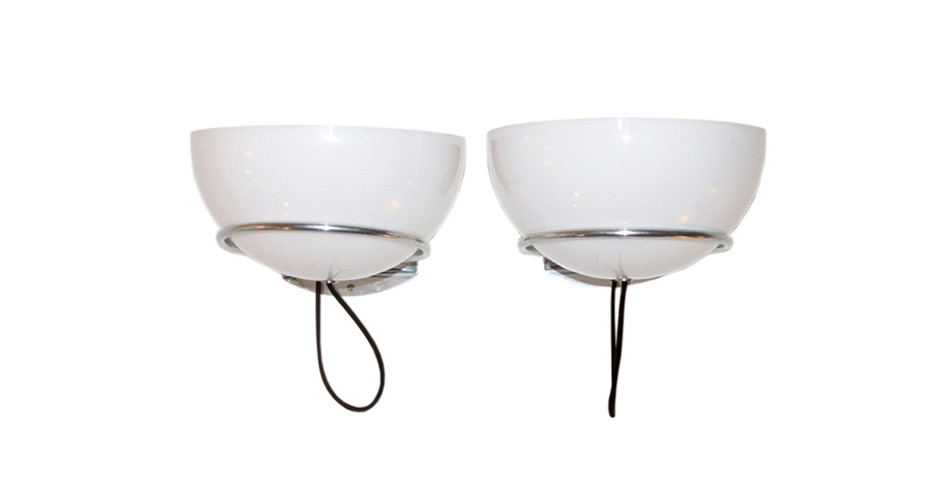 Born in Venice in 1912, Gino Sarfatti designed his first light in 1938. One year later, he founded the production studio Arteluce. He is known today as the most important light designer in history. These 2/2 PX lights, now out of production, show great innovation and mark the beginning of the use of Perspex, seen here in the form of cups supported by aluminum rings. 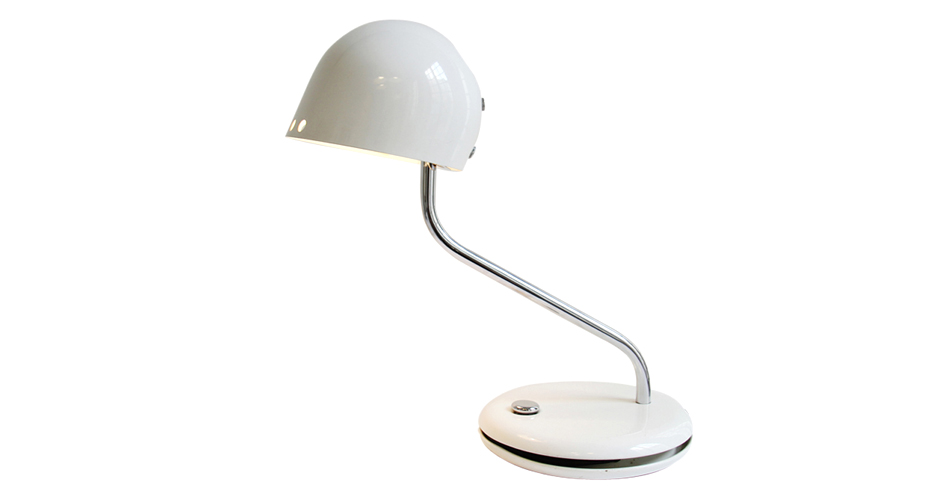 Colombo was one of the greatest Italian designers of the 1970s who did a lot of lighting research. His work was very innovative and futuristic for his time. The Shu shows that Colombo truly analyzed all of the lighting possibilities. The lampshade and its tubing are adjustable, giving it several orientations. Also, it has a dimmer and its cord wraps into the base. This piece is difficult to find today. 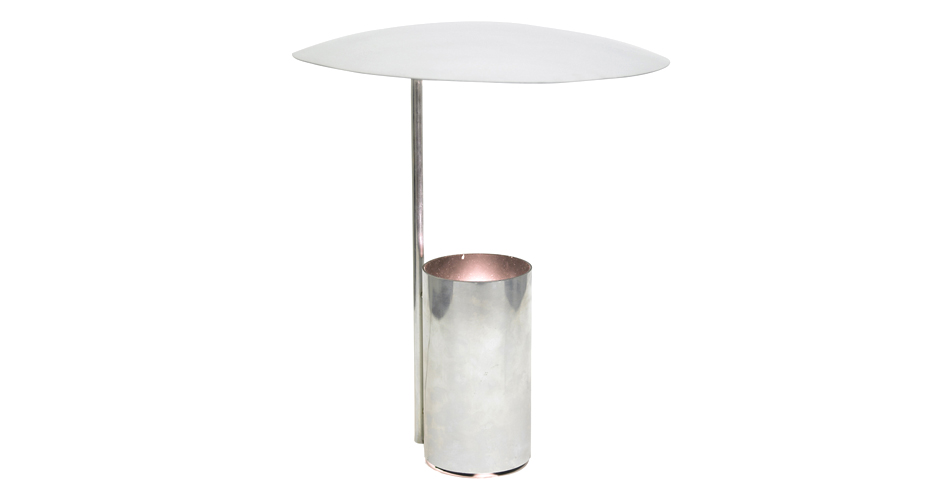 Nelson (1908-1986) was one of the greatest modernist American designers of the 1950s. This table light is extremely well proportioned. The light, which originates inside the chromed metal base, is perfectly reflected off of its lampshade. This rare piece is out of production. 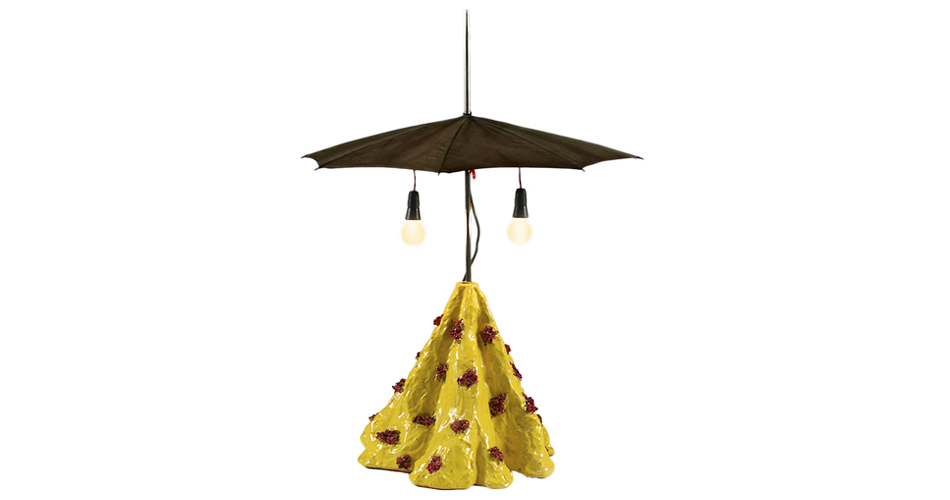 The Paramount light, 1970s, by the UFO group

This light consists of a glazed ceramic mountain-shaped base sprouting a small umbrella lampshade that dangles with two light bulbs. Its design is whimsical and playful. This piece is a perfect representation of the Studio Alchimia concept of post-modernism, creating a conversation about the “ordinary object” and its redesign via decoration. Very few of these pieces were produced. 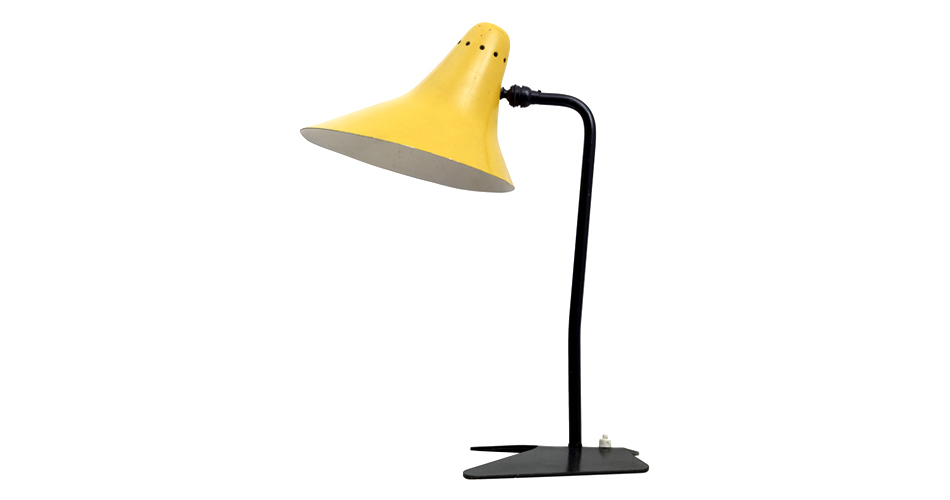 Lacroix (1903-1984) began designing lighting in the 1930s and continued until the end of his life. Color choices were always very important to him, as was the quality of the light’s production. This rare table lamp with a bright yellow shade and produced by Robert Caillat, is sober and very stable with perfectly studied lighting.